One of the most interesting storylines within football in recent weeks has been the narrative surrounding Arsenal and their former club captain Pierre-Emerick Aubameyang. The Gabonese striker has not played for Arsenal since December 6th following a breach of club discipline and he has also been stripped of the captaincy. Now, Arsenal have made it clear that they are willing to listen to offers for the 32-year-old striker. This has been a quick development for a player who signed a new contract last season which made him the highest earner at the club.

Whether there will be a market for the forward or not remains to be seen. His contract and age combined with the fact that Arsenal will still look for a fee in return for the player will likely limit the number of clubs that have an interest in the player.

The most interesting aspect of this for me, however, is that Arsenal are now in a position with the Aubameyang situation and Alexandre Lacazette being out of contract in the summer in which they can rebuild the attacking side of their squad. Mikel Arteta is now in a position where he has established himself as a coach with a clear vision and gameplay and this has now started to translate to points and performances and as such his position and backing from the board and the fanbase has put him in a powerful position. The question though is what will Arteta want to do at the position?

Arsenal are in a position at the moment when they have a number of extremely exciting attacking players in Bukayo Saka, Emile Smith-Rowe and Garbiel Martinelli and then coming from the midfield they have the creativity of the Norwegian international Martin Odegaard. The key will be finding a striker who does not block the pathway of any of those players and who has the ability to link play and provide an attacking platform before bringing those players into the game in the attacking phase. In this article, I have used data to look for players who I believe will make an interesting fit at the Emirates and who will enable the development of the young players already at the club.

All data is from Wyscout with Tableau then used to compare and visualise the outputs. 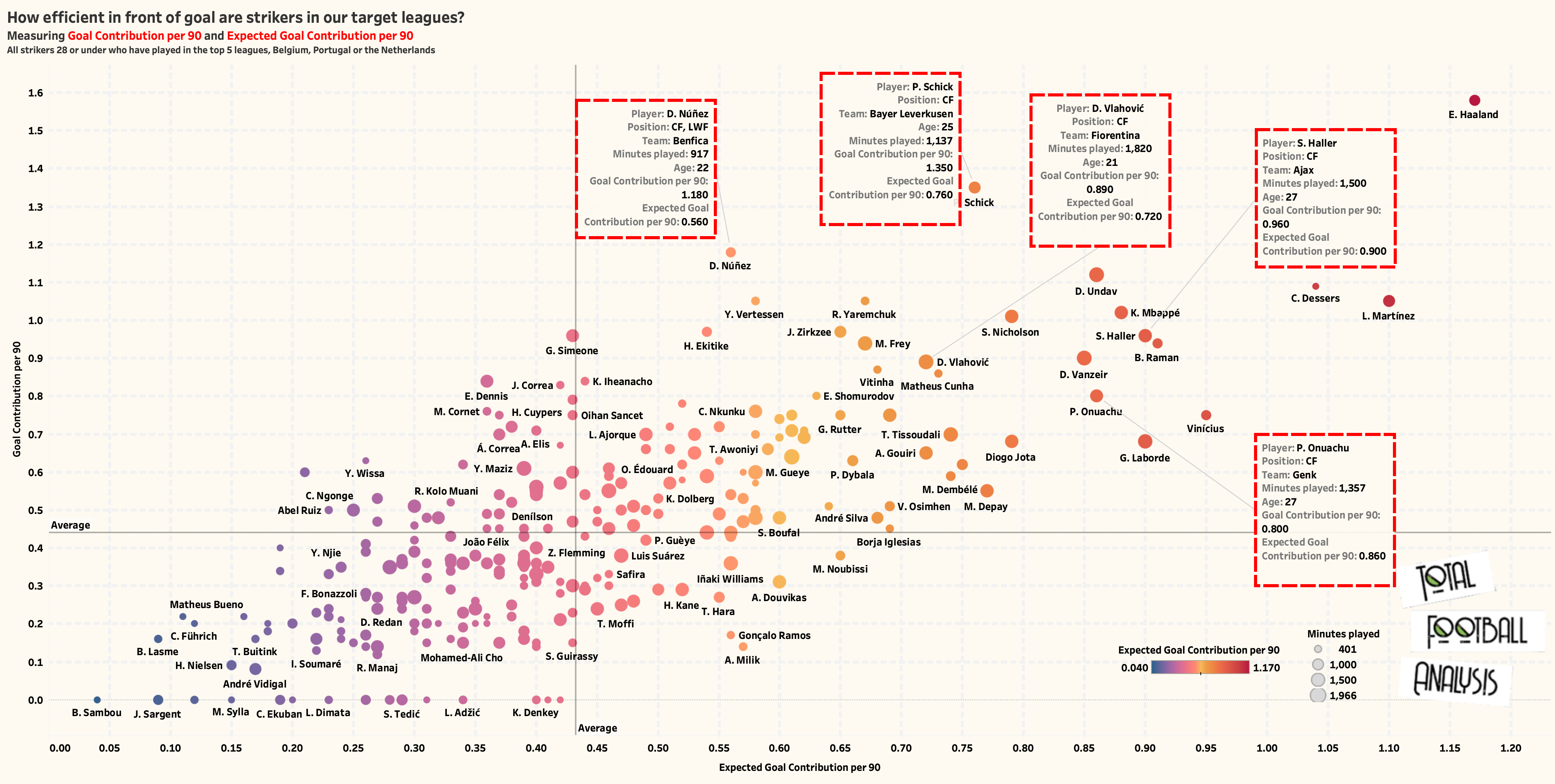 In doing this we obviously get a feel for which players in our data set are the most effective in front of goal. When you create scatter charts like the above the key thing is that they pass the eye test and that we can gain meaningful insights from them. For the first thing, the eye test, we would of course to expect to see Erling Haaland as the stand out player in our data set and he is firmly placed in the top-right as an outlier. While Arsenal fans may be wondering why I am not including the Norwegian on my shortlist of players for the club, I do not see Haaland as a realistic target for Arsenal.

The chart above, however, does give you an insight into the other players from around Europe who are performing well in front of goal. It also shows you for the first time the five players on our shortlist. 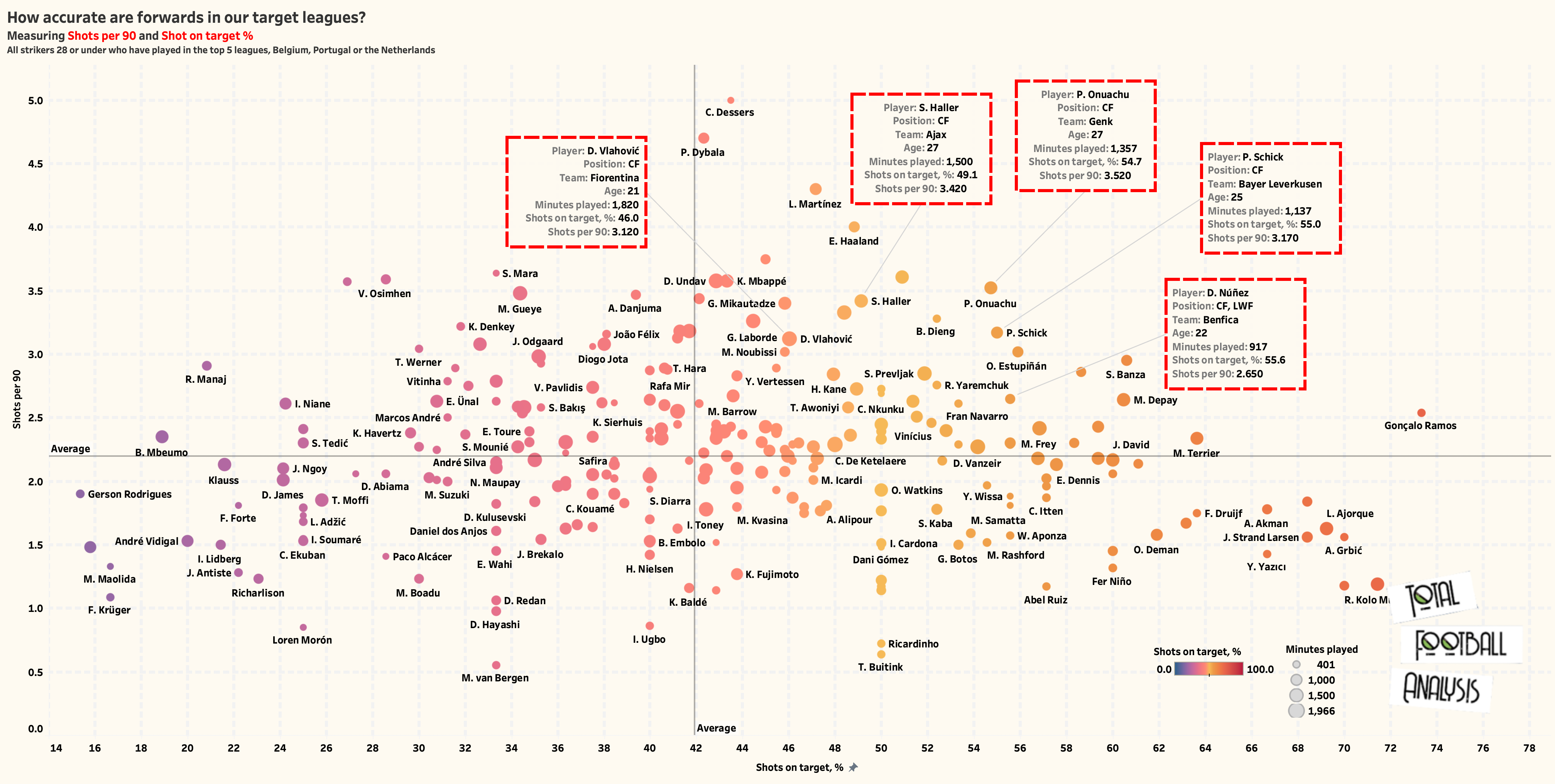 Next, we will look more in-depth at which strikers are most likely to hit the target when they are shooting. This is relatively straightforward but I have to admit that it is something that I had largely overlooked until I started to work within football and realised how much stock coaches put in the % of shots on target. This is a combination of metrics that are interesting when you are looking at forwards that may be undervalued. Look at some of the names in the bottom right of the scatter graph for example. They are hitting the target well but taking fewer shots. Now, if you move those players to a club that are generating more shooting opportunities I would expect the SOT% to remain stable.

Once again though the five players that we are considering on our shortlist are all placed firmly in the top-right quadrant. 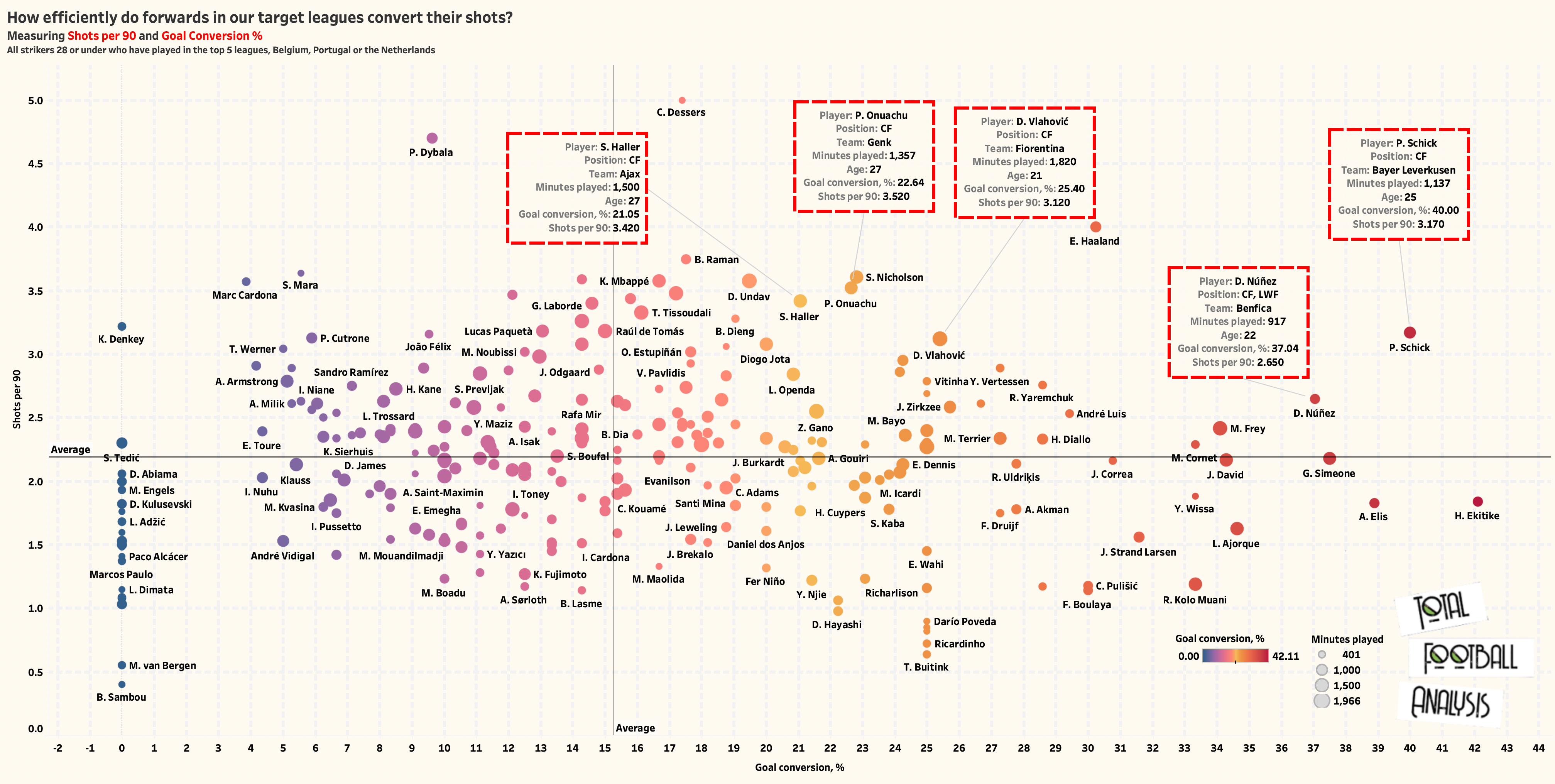 Next up we will take a slight change in terms of the metrics we are combining as we are still using shots per 90 but now we are looking at the % of shots taken that result in goals. Once again we are looking to ensure that we find a striker who is efficient both in terms of his actions and in terms of his outputs. Once again we can use this combination to identify players who are in the lower right quadrant of our graph that may be able to increase their output if they move to a club that creates more opportunities for them to take shots at goal. 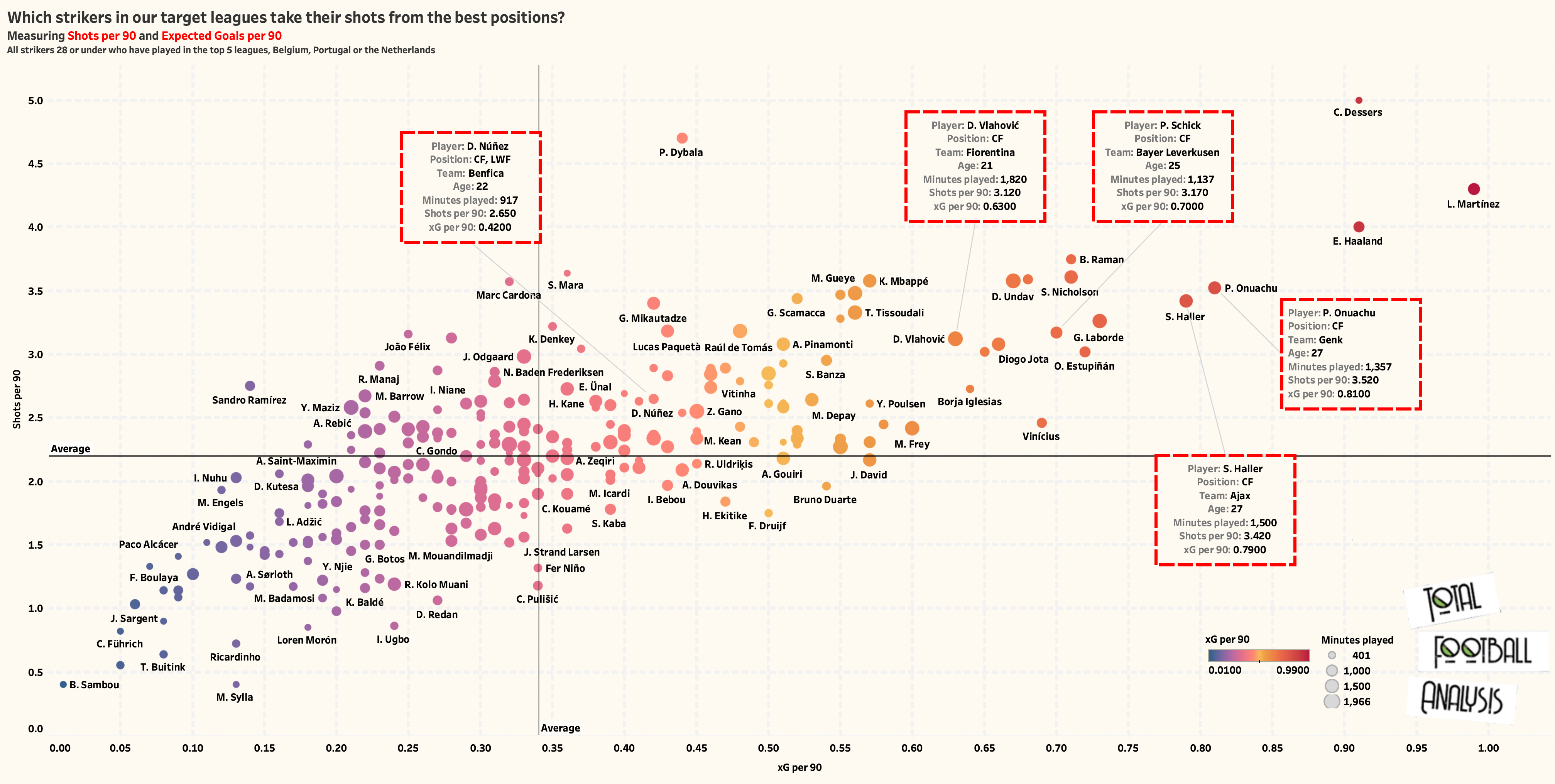 Finally, we will take a look at shot quality. Using the data at our disposal at Wyscout we can assess shots per 90 (again) but this time compare it to xG per 90. This starts to give us an indication as to which strikers in our data set are taking their shots from the best positions.  Once again we are looking for players in the top-right quadrant of the graph and again all five players that we are suggesting for Arsenal are placed there.

A lot of the analysis above is only the first step in the process at identifying strikers that would be a good addition for your club. There are elements of the analysis above that I would then drill down further into to get more detail out of but in order to provide a first look and to identify players that you might want to take a closer look at the above analysis will generally work very well.

But which player from the shortlisted five would I be looking to sign if I was heading the recruitment team at Arsenal? Well, I’m going to cheat a little (because I can) and choose two to take forward to the next stage. Those are Patrick Schick at Bayer Leverkusen and Darwin Nunez at Benfica. The former is a forward who will drop deeper and look to link with teammates while the latter is more of an explosive forward who will shift into wide areas and pull defenders out of position. I think that either of them will make good additions for Arsenal going forward.