We are in the closing stages of most leagues across Europe and the Scandinavian leagues have only just got underway. It is an interesting time to start looking at some of the more interesting young players around the continent with an eye to judging which players clubs may be looking at in terms of summer transfers.

In this article, I am going to specifically look for forward players who are aged 24 or under and who have had a good impact for their sides so far this season.

Before we really get going, however, I should point out that this article is not intended to tell you that the likes of Kylian Mbappe and Erling Haaland have been strong performers this season (spoiler alert; they have) and as such I will not be counting players who are already, in my opinion, elite. Instead, we will look at players who are currently playing for teams who are perhaps in the middle tiers of their leagues but who might well be ready to take the next step in their career.

As ever when performing tasks like this I like to use data in order to make it easier to cut through the noise and identify the players that are performing at a good level. All data is taken from Wyscout although the eagle-eyed amongst you will realise when you look through the article that I use some metrics that I have developed and tested over a period of months – the raw data, however, still comes through from Wyscout.

In the first instance, however, I want to look at how involved the players in our data set have been in terms of goals and xG for their teams so far this season. Our data set includes all forwards in the top-5 European leagues who have played at least 450 minutes so far this season. Crucially though when we are approaching this from a recruitment perspective, we do not just want a list of the players in our data set who have scored or assisted the most. Instead, I want to identify the players who are performing strongly in these metrics for these teams. For those of you that have been paying attention I actually wrote an article detailing exactly how I do this on this site just a few weeks ago. If you want to read that piece then you can find it here.

After I have picked out five players who I think are interesting going forward I will use percentile data in order to visualise how those players are performing in their leagues so far this season.

So, the first step is to decide which players we are going to take an in-depth look at. On the left side of the above viz, we have a bar chart that shows the % of each player’s involvement in terms of goals for their team. This basically means that if a player has scored 5 goals and assisted 5 goals then their goal contributions are 10, then if their team has scored 100 goals then their % involvement would be 10% – simple, right? The same goes for the bar chart on the left-hand side although this time we are looking for the % that each player has been involved in their team’s xG. So, again if the player has an xG of 5 and an xA of 5 then their expected goal contribution is 10. Then, if their team has an xG of 100 then their % involvement in team xG is 10%.

There are some interesting names on each list but it is fair to say that Amine Gouiri of Nice has to be one of our players. He has contributed 25% of all team goals and 26.15% of all xG for his team.

Next, we will highlight the Sassuolo and Italy forward Gianluca Scamacca who has contributed 18.79% of all of Sassuolo’s goals in Serie A and 15.75% of their xG.

Staying in Italy the Albanian international attacking midfielder Nedim Bajrani is having a really interesting season so far in Serie A with Empoli. So far this season he is responsible for 13.32% of their goals in Serie A and 19.83% of their xG.

The last two players that we will take a look at are both currently based in Germany with the Mainz 05 striker Jonathan Burkardt currently being responsible for 14.88% of his sides goals and 14.08% of their xG.

Finally, we have Jesper Lindstrom as the Danish international is currently averaging 15.26% of Eintracht Frankfurt’s goals and 18.5% of their xG. 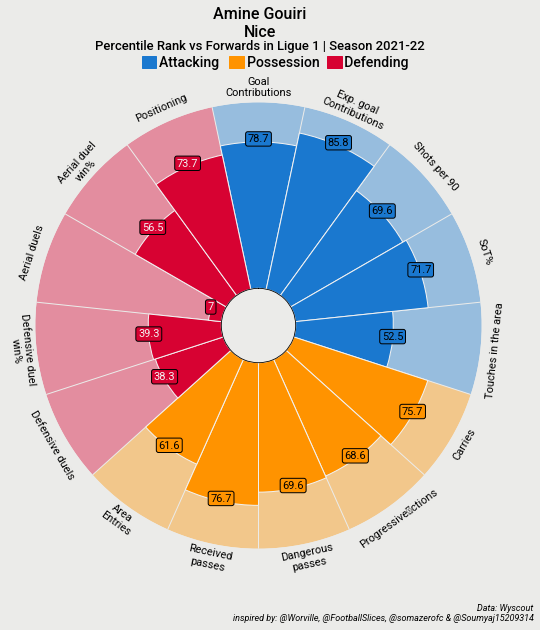 So, now we can use pizza charts to show each player’s percentile data in their respective leagues so far this season. For those of you who do not know how to read these visualisations, they are extremely intuitive. Each ‘slice’ represents a metric which is labelled at the end. The higher the line, and colour, the better the player is performing in that metric compared to all other forwards in their own league.

As you can see Gouiri is performing well in the attacking (blue) section with excellent outputs for expected goal contributions, showing us that he gets into good areas, and for goal contributions. His outputs in terms of shots per 90 and the % of those shots that are on target are also impressive. Gouiri is also a forward who drops into deeper areas and comes into the channels. As such his ball progression section (orange) is also strong with good outputs for carries, received passes and dangerous passes. He also gets the ball into the area at a good rate as we can see from his area entries.

Gouiri is not only performing well. He is also performing consistently and I would not be surprised to see him targetted by a larger club in France or even a club in England who are looking to increase their attacking options. 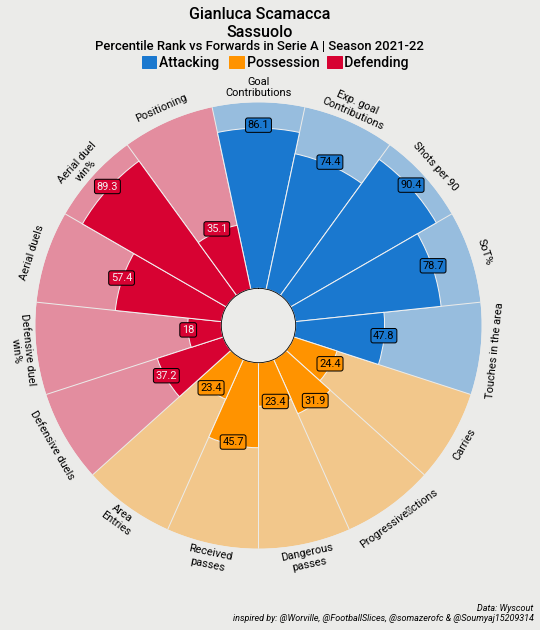 Next up we will look at the Italian international Gianluca Scamacca of Sassuolo in Serie A. If you look at Scamacca’s pizza chart and quickly compare it to Gouiri above then you will immediately see that Scamacca is more of a traditional forward type as opposed to a more mobile and creative forward like Gouiri.

Going forward the likes of Milan, Inter and Juventus have already registered an interest in securing the services of the young forward. There is no doubt in my mind that he will stay in Italy. It is just a question of which of the country’s traditional giants he chooses to move to. 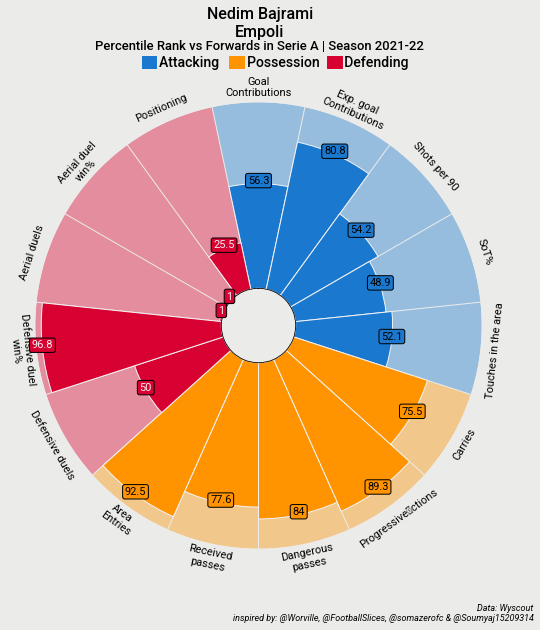 The 23-year-old Empoli attacker Nedim Bajrani is the first player on our list who is not an out and out forward. He typically plays as more of a ’10’ with the freedom to roam into the channels or get forward to support strikers as the ball moves into the final third.

In this sense, he is the polar opposite of a player like Scamacca and this is shown clearly in the differences between their pizza charts. Bajrani is a player who excels in terms of his possession and ball progression. He is excellent when it comes to area entries, dangerous passes, progressive actions and even carries. He is a clear creative threat for his side and given their struggles at the wrong end of the table his creative contributions have been extremely strong.

Bajrami is a target for the likes of Milan and Lazio already and it looks extremely likely that he will move on in the summer but as with Scamacca he is likely to stay in Italy. 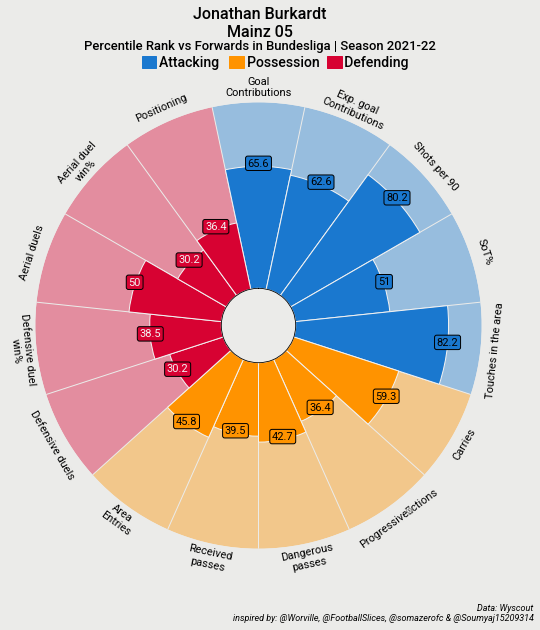 Next, we will move to Germany where Jonathan Burkardt has been impressing for a Mainz 05 side who are coached by the exciting Bo Svensson. Burkardt is a mobile forward player who is capable of playing as the ‘9’ and leading the line or of playing as a second striker with more freedom to drop off of the front line to occupy pockets of space.

He has impressed this season the most with his ability to get into shooting areas to enable his side to move into the final third. He also has good output for touches in the opposition area.

Burkardt is another who has already been linked to a move to Lazio, who are looking to enhance their forward options, and a move away from Mainz this summer is looking like a distinct possibility. 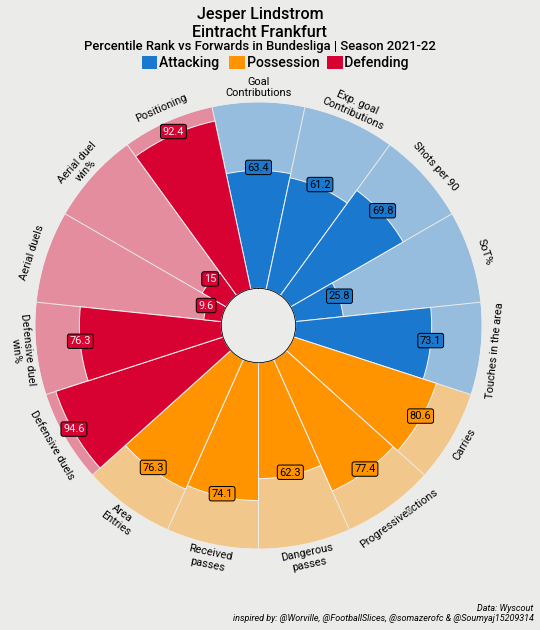 Finally, we will discuss the Danish international attacker Jesper Lindstrom of Eintracht Frankfurt. Lindstrom only moved to Germany at the start of this season when he left his original club Brondby for a fee that is thought to have been in the region of £6.3M. Lindstrom is a forward player who is versatile in terms of his role as he can play as the central striker, from the wide areas, or as a second striker dropping into channels and spaces between the lines.

As you can see from his pizza chart he is balanced between the attacking and possession or ball progression sections with a creative threat as well as having a threat in front of goal.

While Lindstrom is still in his first full season in Germany he was strongly linked to a move to the English Premier before making the move to Germany. If he continues to develop and perform at this high level then I would not be surprised to see the links resurface with significant interest.

Using data as part of the recruitment process and assessing players in key metrics through their % contribution to their sides output is a method that allows us to cut through a lot of the noise that data can provide. It is important when going through a process like this though to ensure that you start to judge the players and their data through the lens of the metrics that you think are the most important or relevant to your club.

When it comes to coding and creating visualisations like pizza charts it can be daunting to start but there is a lot of information available online to help you get started. Indeed, there are also GitHubs that provide the code for you in order to copy and then adjust to fit your needs.