The domestic French market has long been considered amongst the most talent-rich in the footballing world. French clubs have a reputation for trusting in young talent and players are given sustained opportunities at first-team level from an early age. A lot of clubs domestically rely on the cycle of player development and player trading to balance their finances and this is even more true now following last seasons collapse of the deal for domestic TV rights. The sheer depth of talent in French football leads to a trickle-down effect with young and talented players appearing just as readily in the second tier as in the first. In Ligue 2, the French second tier, there are a number of young players who have started the 2021/22 season extremely well. In this article, I have used data analysis to identify five players who are of particular interest and who I think will be scouted by clubs from larger markets.

There is no doubt in my mind at all that data is an important part of the recruitment but it is only part. After you have used data to cut through the noise and identify a long list of potential targets that will fit you needs you still have to use a combination of live scouting and video scouting to ensure that you have as full a picture of the player as possible. All information is useful in the recruitment process and you can never have too much before you eventually make your decision as to whether you will sign a player or not.

The first player on our shortlist is the 22-year-old Morrocan wide player Yassine Benrahou of Nimes. He is predominantly right-footed but comfortable when playing from the right-wing and the left-wing. This is a result of both his balance in possession and his ability to control and manipulate the ball comfortably with either foot. He plays in the half-spaces as much as in the central spaces and he is extremely adept at finding pockets of space in which he can receive the ball before turning and engaging the opposition defensive structure. Benrahou spent some time in the youth system at PSG before moving to Bordeaux and eventually to Nimes prior to the 2020/21 season. This season we have already seen the young winger play 1024 in the French second flight.

As you can see from his profile he is an extremely balanced player with good output both in the attacking and passing sections of his data profile. He is averaging 5.54 dribbles per 90 with a success rate of 44.44% but he is more than a ball carrier as his creative metrics show. He is also averaging 6.15 progressive passes per 90 and 5.80 passes to the final third per 90 as well as 3.25 passes to the penalty area per 90. He has quickly developed a reputation as a player who is key for his side in progressing the ball with his ability to carry the ball forward himself or play the progressive passes that break the lines of the opposition. His goal and assist output so far this season has also been extremely impressive with 0.35 goals per 90 and 0.35 assists per 90 from 0.20 xG per 90 and 0.22 xA per 90. This sees the young winger averaging a goal involvement of 0.70 per 90.

Given his skill set and output so far this season a move to a Ligue 1 side in the near future is the least that I would expect but clubs from the Bundesliga have been shopping in this market recently and I would not be surprised to see him make the move across the border. 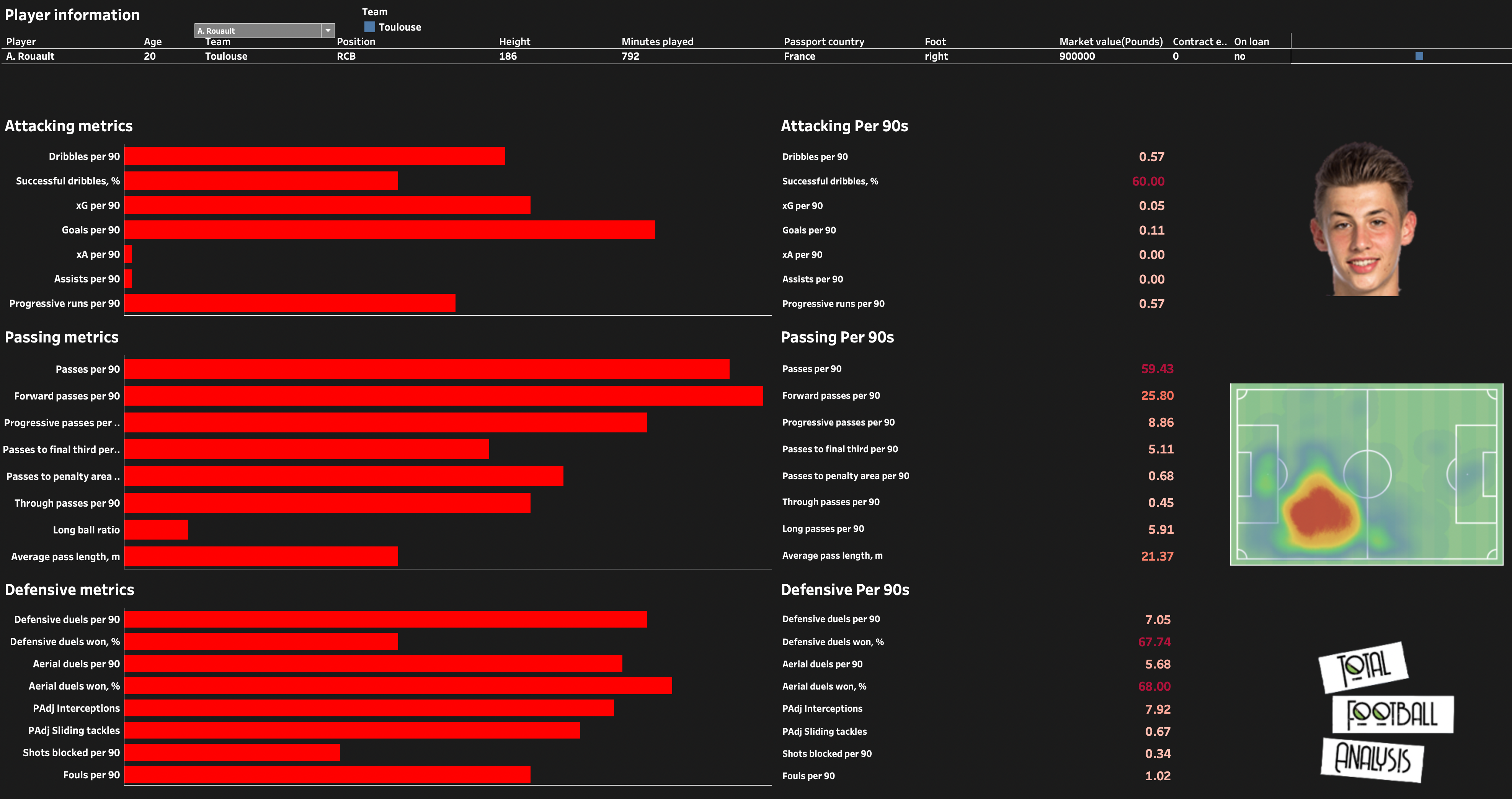 The next player on our shortlist is the 20-year-old Toulouse central defender Anthony Rouault. He is a right-footed central defender who is most comfortable playing on his natural right side of a central defensive partnership. He also, however, profiles as a player who would be comfortable playing as part of a back three as he has the mobility to play and defend out in wide positions as needed. He is a mobile and calm central defender who times his challenges extremely well and uses the ball effectively when in possession. He is listed at 186cm | 6’2″ with a lean and athletic frame although I would expect him to put on muscle as he continues to train and develop in a professional environment.

Rouault has an extremely balanced profile once more with impressive outputs both in the defensive and passing sections of our dashboard. So far this season he has played 792 minutes in Ligue 2 and he is averaging 59.43 passes per 90 as Toulouse look to build out through their central defenders. From this, he is averaging 8.86 progressive passes per 90 and 5.11 passes to the final third per 90. He is capable of playing diagonals to access the opposite side of the pitch or playing vertically with line breaking passes. In the defensive phase, Rouault also impresses. So far this season he is averaging 7.05 defensive duels per 90 with a success rate of 67.74% and 5.68 aerial duels with a success rate of 68%. This is combined with 7.92 possession adjusted interceptions.

At the time of writing, Toulouse are sitting top of Ligue 2. It looks very likely that they will be able to return to the top-flight this season and I would suggest that Rouault will be a key part of their defensive unit when they are promoted. 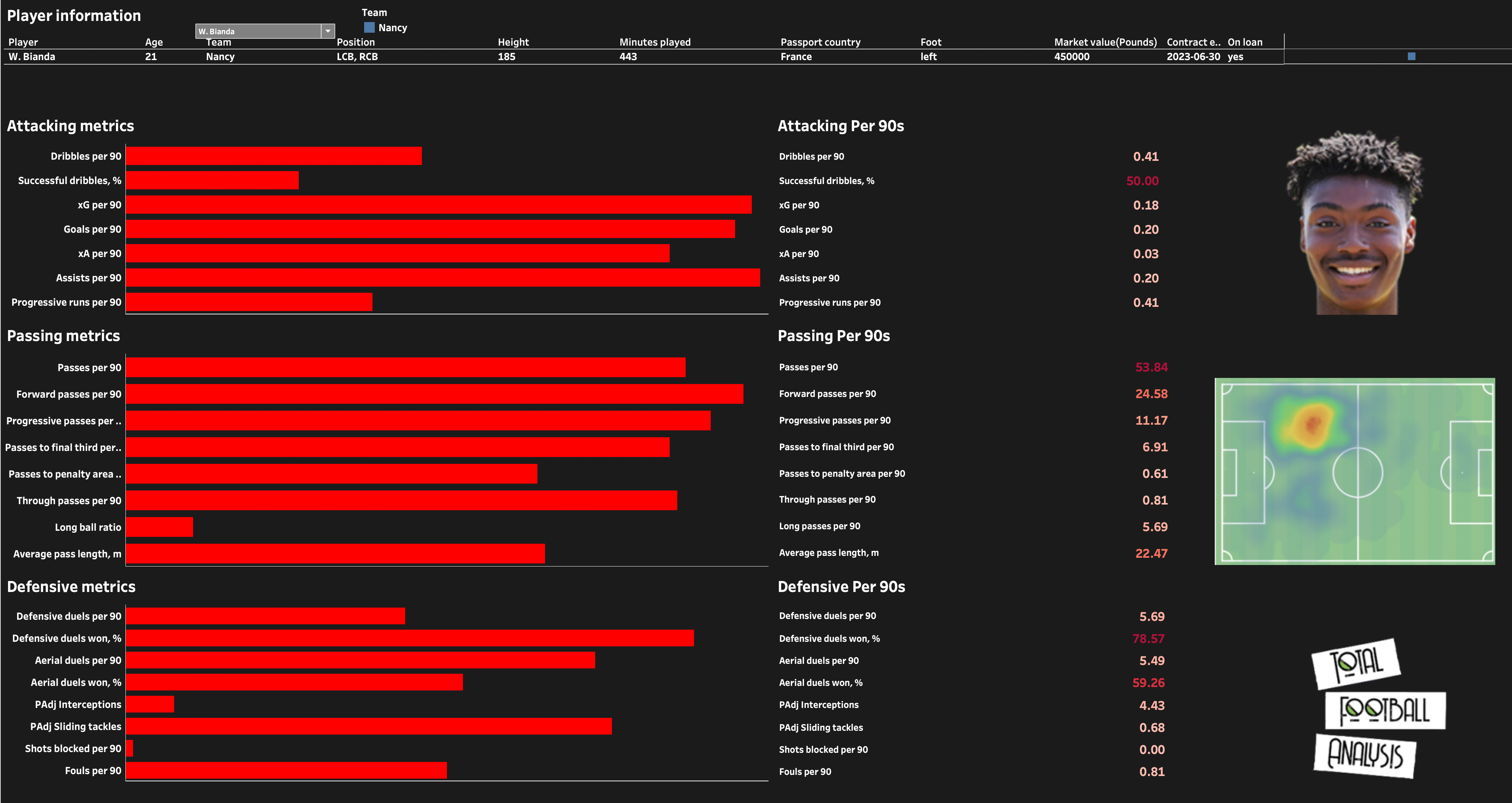 Next up we have a player who is actually already on the books of a club in a top 5 league in the 21-year-old central defender William Bianda who is on loan at Nancy from Roma. I have included Bianda on the list because every time I have seen him play he has stood out no matter who else was on the pitch with him. He is eligible to play for the Ivory Coast but so far he has represented the French national sides up to U19 level and given the quality of his performances I would not be surprised to see him continue to move through national team squads. He is predominantly left-footed and capable of playing in a four at the back or three at the back system. He is listed at 185cm | 6’2″ and has an extremely athletic profile from a physical perspective. He is a product of the prolific Lens academy but he made the move to Italy to join Roma in the 2018/19 season,

What first stands out when watching Bianda play is his ability in possession of the ball. So far this season he has played 443 minutes in the French second-tier but he is averaging 54.94 passes per 90 with 11.17 progressive passes per 90 and 6.91 passes to the final third per 90. He is an extremely capable passer of the ball with the range to access all areas of the field. In the defensive phase, he is averaging 5.69 defensive duels per 90 with a success rate of 78.57%  and 5.49 aerial duels per 90 with a success rate of 59.26%.

Bianda will be watched closely by scouts as they are aware how difficult it can be for players to break into the first team at Roma. He may well be available at the end of this term for another loan deal. 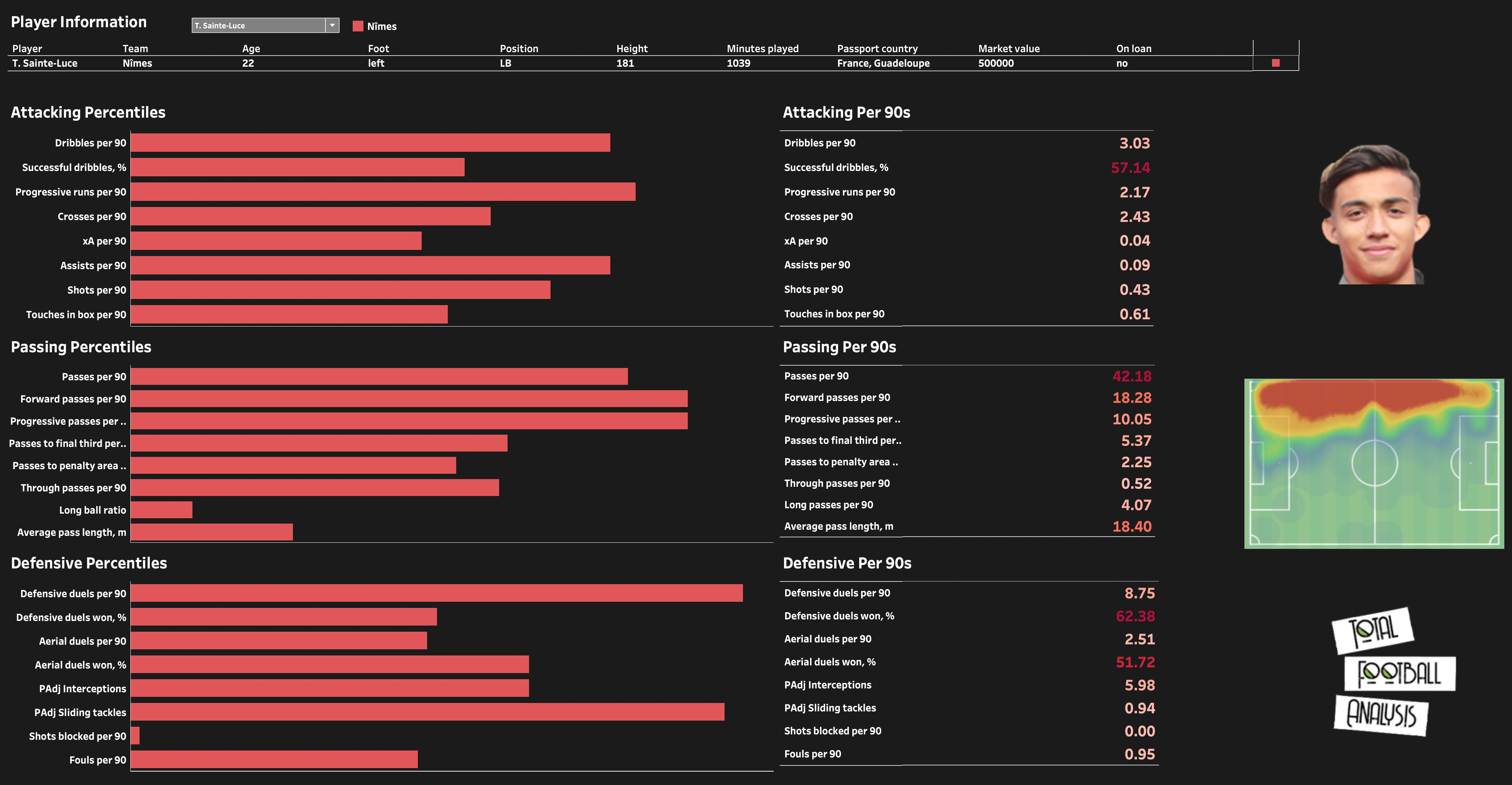 Theo Sainte-Luce is a 22-year-old left-back who is currently contracted to Nimes. He profiles as a left-back but I think that he also has the physical profile to play as a wingback in a three at the back system. Sainte-Luce is a fullback who is an excellent ball progressor with the ability to play the ball vertically into the feet of the winger of forwards or to beat a man before then looking for a passing option as space opens up ahead of him. He is left-footed and listed at 180cm | 5’11” which gives him an excellent frame for a fullback. Sainte-Luce is a product of the Nimes youth academy but he has spent time on loan, including last season with Red Star, before he has made his impact at first-team level at Nimes this season.

Theo Saint-Luce is having a breakout season at this level and his performances and data are catching the eye. He offers balance from the left-back position and the ability to progress the ball through the thirds. He is another who is likely already being watched by a number of clubs around Europe. 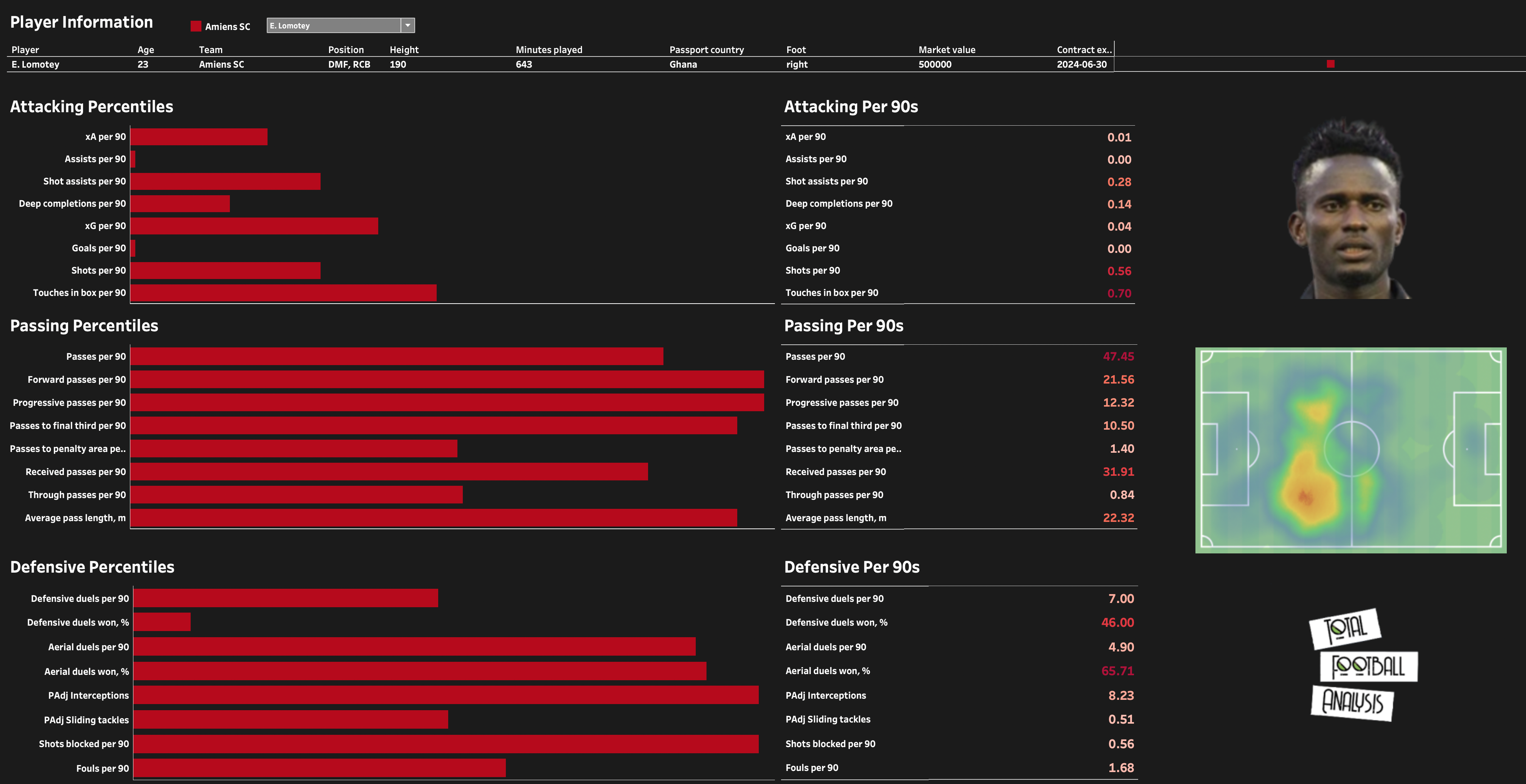 The last player on our list is the 23-year-old Ghanian central midfielder Emmanuel Lomotey who currently plays for Amiens as well as the Ghanaian national team. Lomotey is a central midfielder who prefers to sit in deeper positions from where he can dictate the play. It is not unusual to see the midfielder drop back to almost the same line as his central midfielders in order to take possession of the ball before looking for opportunities to play forward. He has an incredible passing range with the ability to play long passes with accuracy that release teammates into space or break the lines of the opposition defensive structure. Lomotey is predominantly right-footed and listed at 190cm | 6’3″ with a lean and athletic build. He initially moved to Europe with Extramadura in Spain before moving to Amiens in the 2020/21 season.

This season Lomotey has played 643 minutes in the second tier and he is averaging 47.45 passes per 90 with 12.32 progressive passes and 10.50 passes to the final third per 90. His biggest strength is his ability to find ways to help his team progress through the thirds quickly and accurately. As you can see from his data profile he is not active in the final third but his defensive profile is also strong with an average of 7 defensive duels per 90 and 4.90 aerial duels with success rates of 46% and 65.71% respectively. He also reads the game really well and is averaging 8.23 possession adjusted interceptions.

Lomotey has a game that appears ready-made for the Bundesliga although I would not be surprised to see him move to the French first tier in the first instance.

For the last two seasons, the talent pool in the French second tier has felt a little light. This season though the well once again appears to be full. The five players above are just the tip of the iceberg in a league that is extremely deep in terms of both quality and talent.