In the first of a semi-regular series of articles on this site, we will use data analysis techniques in order to find young players who are undervalued but performing well in their respective leagues. There are many leagues throughout Europe in which the title race will tend to be dominated by a small collection of sides.

Unless you are a fan of that league or have an unhealthy obsession with the Football Manager game you are unlikely to be aware of all of the interesting young players who are in those leagues but not playing for a side that will traditionally challenge for the title. There are, of course, exceptions to this rule and in the German Bundesliga, Where Bayern Munich are in a league of their own, there is more exposure in the mainstream media and as such a more broad awareness of players and team in that league.

When working in recruitment within football we want to have a broad base of knowledge when it comes to the identification and recruitment of talent but we are limited by time and resources. So, how can we go about building a reliable network or information that we can look to access?

The answer is a relatively simple one. We can rely on data as a tool to allow us to identify the players who may fit our profiles from leagues around the world. The issue is, however, that player data within those leagues will still tend to be skewed towards the teams who are performing towards the top of the table. If we are looking at Bundesliga data, for example, then we can expect to see Bayern Munich players featuring heavily. If we are looking at the SPFL then players from the likes of Rangers and Celtic will feature prominently in our data set and if we are concentrating on the Austrian Bundesliga then we will see a low of players from Red Bull Salzburg. While this is not necessarily a problem and there are workarounds such as manually excluding players from these clubs from our data set or just ignoring them when they appear there are other techniques that we can use in order to identify the better performing players at clubs not challenging towards the top of the table.

This can, however, mean having to build upon the datasets that we have readily available. In this article, we will be using Wyscout data along with python for coding and tableau for some of the visualisation work. Within both python and tableau, we have options for adding additional calculations to our initial dataset in order to bring the data a little more to life but we will touch on that before.

In this article, we will start by looking at the top-flight of Serbia and we will show the use of data analysis methods to identify four young players, we are concentrating on players aged 23-years-old or under, who are performing well so far this season.

While we are using data we are going to concentrate for the purposes of this article on certain key metrics. We are interested in goal and expected goals, assists and expected assists and progressive runs and progressive passes. Instead of just using the raw numbers for these metrics (which is going to give us a list of the players who are contracted to the strongest teams in the league) we are going to use calculated fields within Tableau to apply a formula to give us the % of which a player is involved in each metric for their side. So, if we have a striker who has scored 10 goals but his team have only scored 20 goals he will have been responsible for 50% of total team goals. This is compared to a player who has 10 goals but whose team have 50 goals as he is responsible for 20% of total team goals. Doing this with all of the metrics that we are interested in will start to show us which players play for smaller teams but are extremely effective for those teams.

First up we will look at goal contributions (goals per 90 + assists per 90) and the first thing to note is that we have to go down to 17th on our list before we find a player at either Partizan or Crvena Zvezda. This is in part a result of the data set that I am using as we are only interested in players 23-years-old or under and despite their reputation for youth development they have older squads this season. But it also starts to show us that our method works.

We should add at this stage that this is only a part of the player identification and recruitment process and you should then take the players in the ranking that you are interested in and add them to a workflow to start watching videos of the players in action.

Interestingly Uros Milovanovic is still prominent in this ranking but this time first place is taken up by the 19-year-old wide attacker Stefan Mitrovic of Radnicki Nis with a % contribution of 13.76% to his side’s expected goal contributions. This time we have to work our way down to 13th place to find a player for one of the top two sides in the country.

Finally, for this section, let’s look at the % of the contribution from each player to their team’s progressive actions (progressive passes + progressive runs) as you can see this time the picture changes positionally. The first two rankings that we shared were generally populated by attacking players while this time we are getting defenders, fullbacks and central midfielders. This is generally because players in those positions generate greater outputs for the metrics we are looking at. Strikers are more likely to score and central defenders or fullbacks are more likely to progress the ball. When doing this for a club I would always add in positional filters so that you can easily identify any outliers in positions that you might not expect.

The likes of Filip Backulja (19-years-old and on loan at Metalac from Juniors of Austria) who has 13.52% contribution to his side’s progressive actions and Aleksa Damjanac (23-years-old at Radnicki 1923) who has 12.57% contribution look interesting but my pick is actually a midfield player in Stefan Purtic who is a 23-year-old central midfielder at Vozvodac. 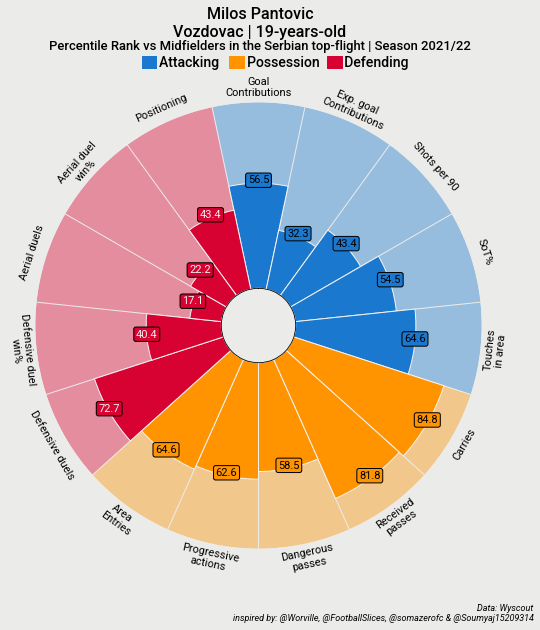 For these pizza charts, we take the data from Wyscout and run it through a python code to convert it to percentile data. This ranks each player in each metric against the other players in the same position. in the same league from 1 to 100. The higher the value the better the player is in that area compared to their peers. That percentile data is then taken and run through another code to produce the pizza chart above. If you are interested in creating your own then the credit for the code is at the bottom of the chart but feel free to reach out for more information.

Pantovic is an attacking wide player who performs well across all possession metrics but in particular carries and progressive actions. He also performs well in terms of dangerous passes and goal contributions. 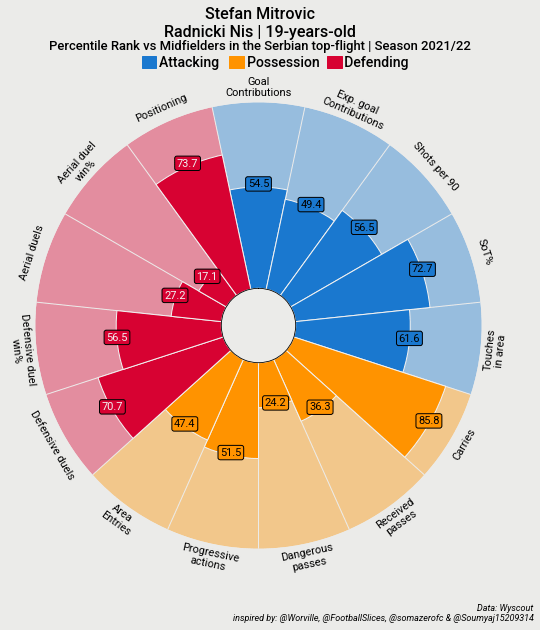 Stefan Mitrovic is a slightly different case in that he is a more traditional wide attacker who thrives when carrying the ball but who also provides above average (average is 50%) outputs for goal contributions, shots per 90, shot on target % and touches in the area. He is a player who is more effective in the final third than when progressing the ball forward. Interestingly his positioning output is also very high in the defensive section. 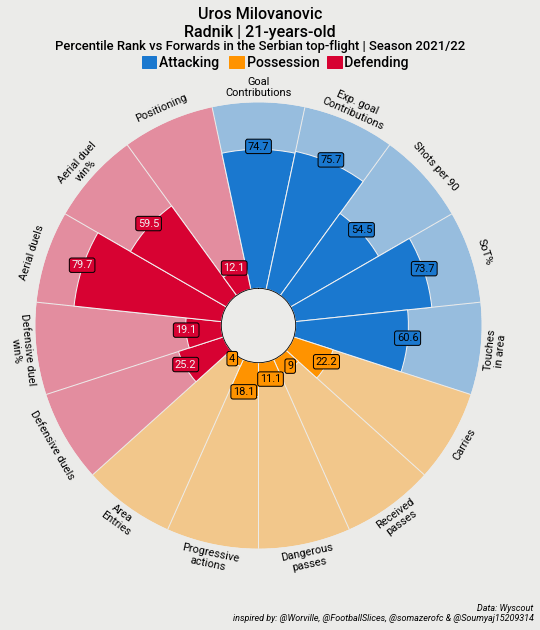 As you would expect from a striker the pizza chart takes a different shape compared to the two wingers above. Milovanovic is superb when it comes to goal contributions, expected goal contributions, shots per 90, shot on target % and touches in the area. He profiles as a goalscoring forward who still has some development to come and with four caps for Serbia at U21 level he has obvious potential. 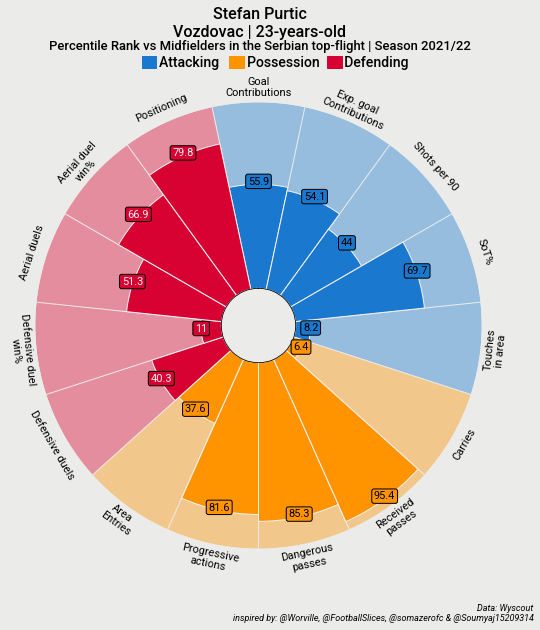 Finally, let’s take a look at the only central midfielder in the group of players that we are interested in. Once again the shape of the pizza chart starts to shift with far more of an emphasis on the possession side of the game. His output for dangerous passes and progressive actions are extremely interesting and as you can see from his high output for received passes he is a player who gets on the ball a lot for his team. His defensive output for positioning also shows us that he can work against the ball in the defensive phase of the game.

So there we have it. Four players in Serbia who are 23-years-old or under and playing for teams who are not typically well known or well scouted. Using data and applying various analysis techniques we can start to really drill into the talent level in various countries.

There is so much depth of talent out there. The trick is finding the players that fit what you are looking for in terms of player profile and style of play.