“They are exceptional human beings with a good mentality. I am very pleased.” – Guardiola

The above was the praise from Pep Guardiola for the young pair of centre backs, who helped City secured a clean sheet at Deepdale back in September. In our previous scout report, we had an analysis of Eric García’s talents. Apart from the former Barcelona academy player, Manchester City also have another gifted centre-back from the Elite Development Squad, Taylor Harwood-Bellis.

The 18-year-old was born in 2002, and he has made his debut in the UEFA Champions League months ago. In the domestic competitions, he played three full games for City. In this tactical analysis, we will provide you with a scout report of Harwood-Bellis’s strengths and weaknesses, and his capability to perform under Guardiola’s tactics.

When assessing a centre-back who plays at Guardiola’s City, his ability to pass is always an indicator. Unlike his partner, García, Harwood-Bellis’ passes were simpler and more direct. However, he is capable of playing vertical passes when necessary. In his first team spells, Harwood-Bellis played 74.03 passes per game and the completion rate was 96.7%. 37.35%of those passes were forward passes.

There were multiple ways for the 18-year-old to pass vertically. The first example we introduce is the determination to pass with his first touch. Passing vertically allowed City to keep the progression of the attack through the centre, where the receiver usually had more options for the next move.

In this scenario, John Stones passed the ball to Harwood-Bellis laterally. Despite a yellow shirt approaching him when the ball was travelling, the centre-back read this by scanning the pitch. Therefore, he quickly identified the passing lane and options and found Phil Foden with a first-time pass. This pass helped City get past Port Vale’s block and continued the attack. 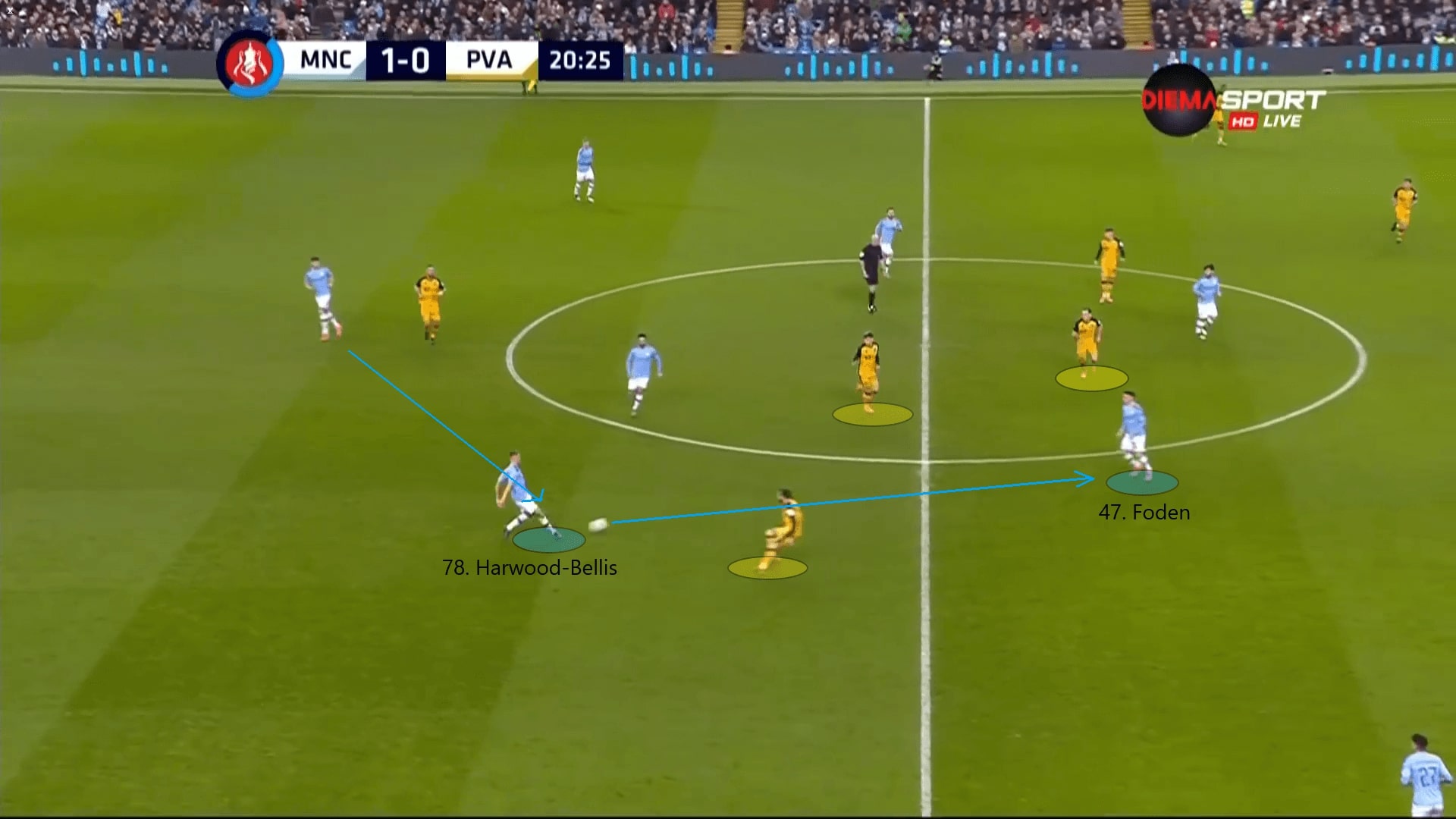 In the second example, we will show you how Harwood-Bellis used his body feint to pass. Again, he tried to find Foden, however, his body orientation was more opened to the touchline. Both yellow shirts in front of him predicted that the 18-year-old was going to find the wide player, hence, started to move wide.

Until the very last moment, Harwood-Bellis finally showed his real intention, which was passing to Foden vertically. The body feint not only generated a wider angle for the centre-back to pass, but it also gave more room for Foden to exploit in the central areas. City could attack in an optimal area and carry on the attack. 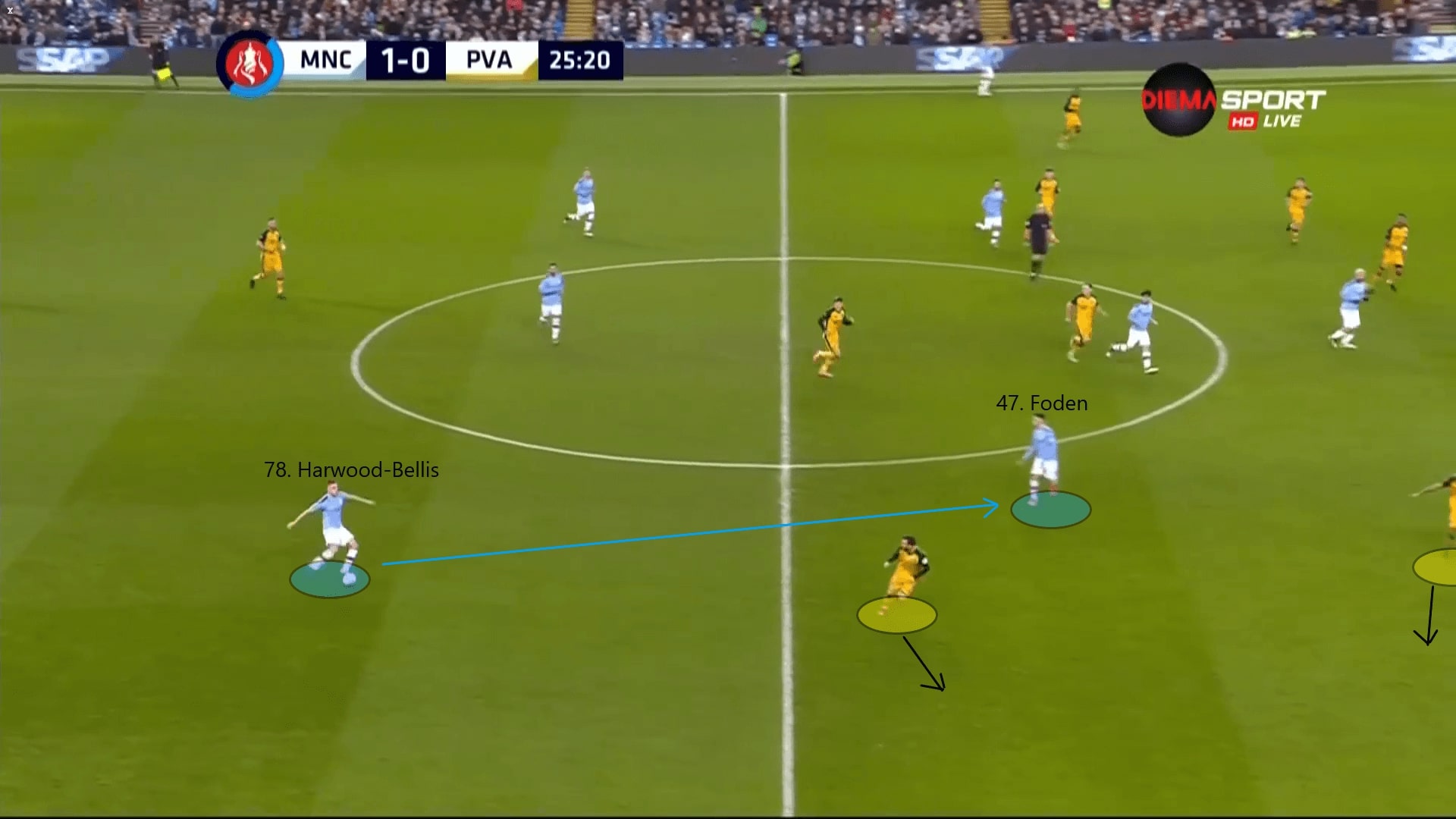 Aside from passing vertically, Harwood-Bellis could also make long passes or diagonal passes to switch plays. These types of passes helped City to shift the attacking focus in an instant, and, bypass the press quickly.

On this occasion, you can see the majority of Oxford United’s pressing players were staying at the centre. The central options of City, Bernardo Silva and Rodrigo Hernández were contained within the Oxford block. Passing to these two players might not help City to progress the attack.

The solution of Harwood-Bellis was to reach the widest option. Oleksandr Zinchenko was staying wide on the left, and totally free to receive the ball. The 18-year-old did not hesitate, and grabbed this chance to find the Ukrainian. Since this pass eliminated the block and two layers of defensive lines, City could start an attack on the flank with more spaces. 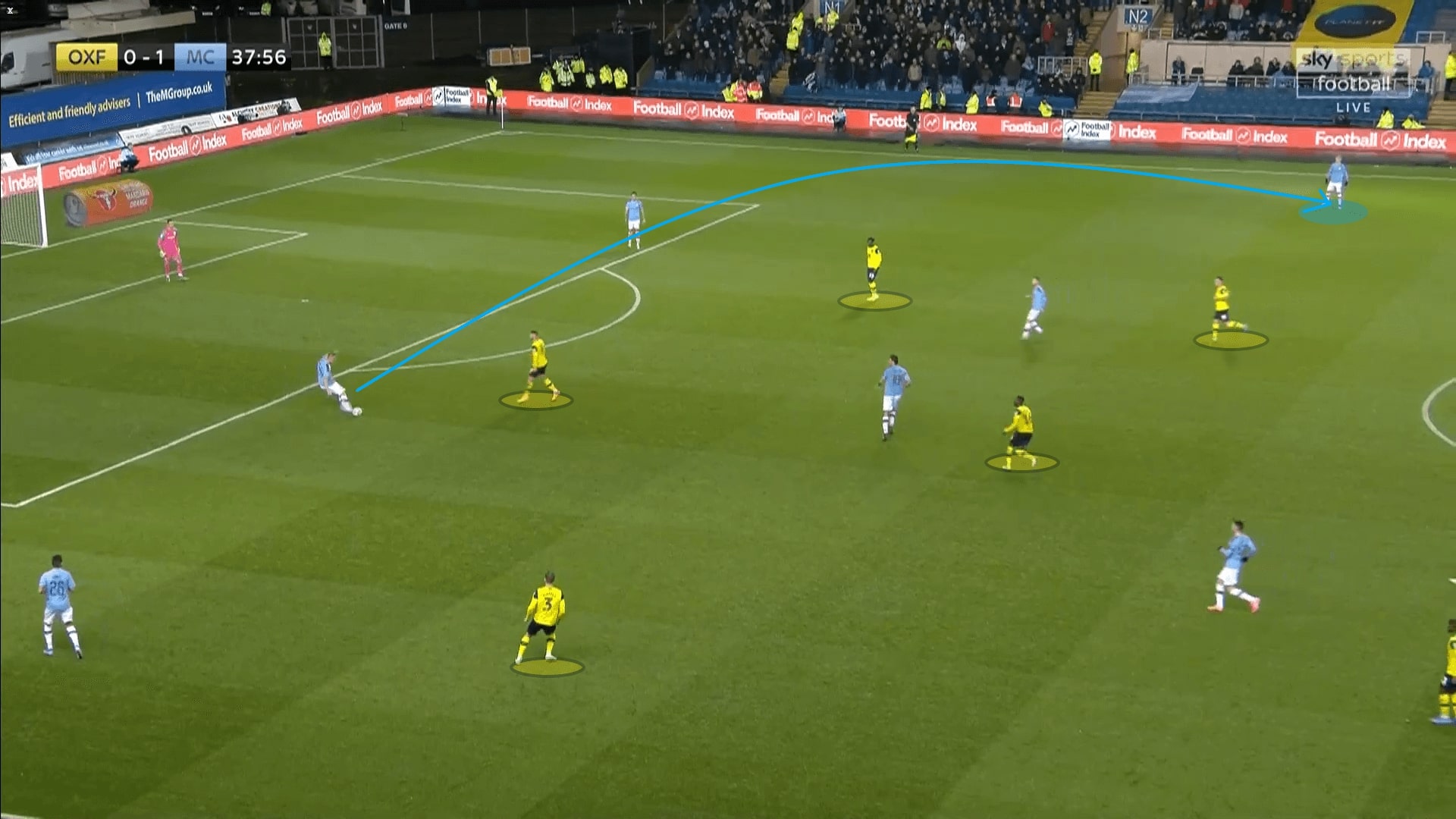 From the above success rate on the duels, we could guess that Harwood-Bellis was an aggressive defender, who seldom avoid contacts with an opposition.

As a centre-back for City, he has to deal with long balls, most of which come from opposition goal-kicks. In such cases, he marks the target very tightly, and he never hesitates to leave his position.

As you can see in the below image, Vale tried to access City’s half with a long ball. Harwood-Bellis stuck to the yellow shirt and aimed to win the aerial duel. Given the tremendous pressure from the back, Tom Pope could only commit a foul on him as he had to protect himself. 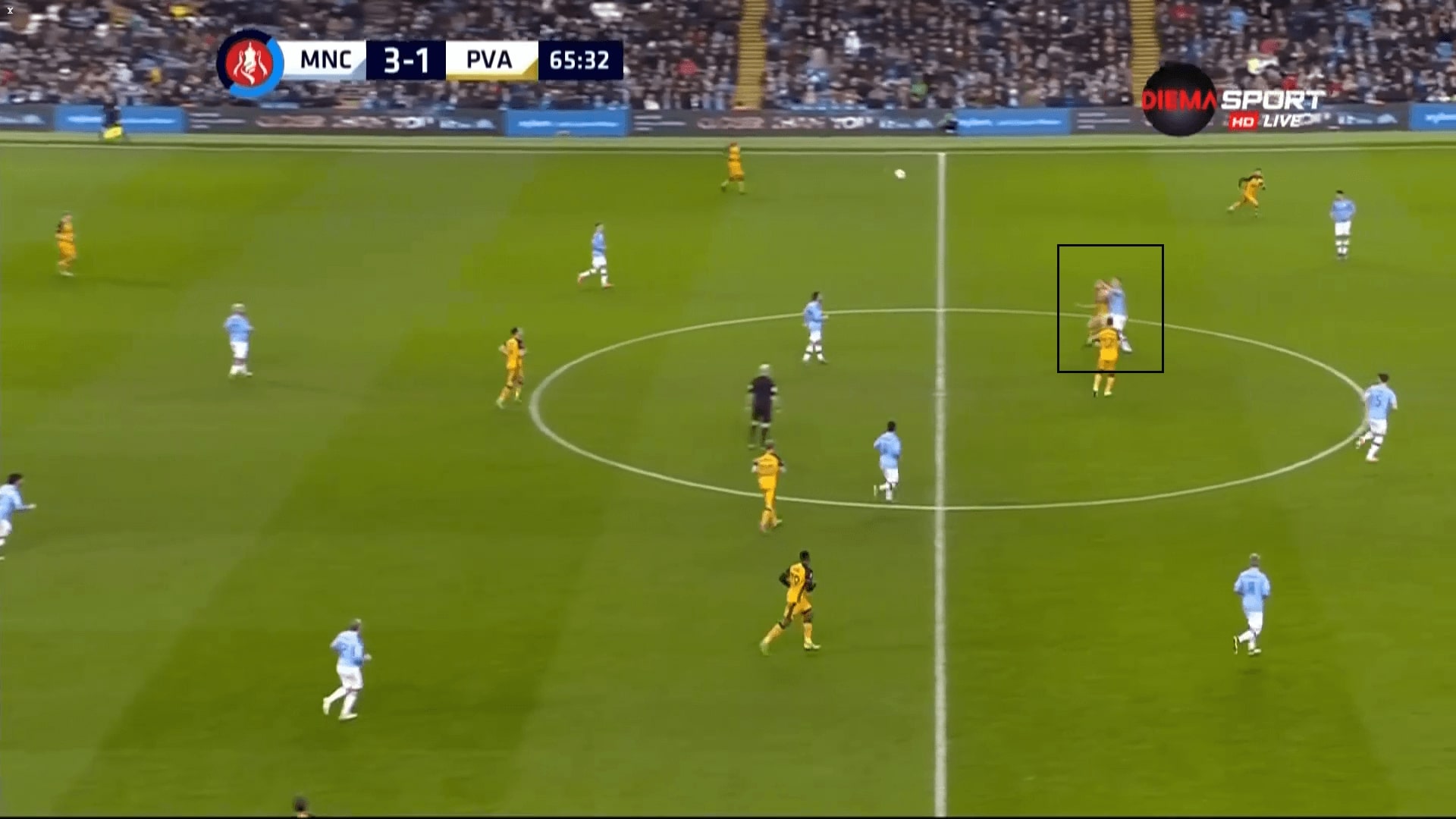 When playing for City, Harwood-Bellis had to get prepared to defend with an imperfect defensive line. For the matches he played, the opponents were coming from different tiers of the English football, hence, he had to defend the crosses very often.

As you can see in this image, the wide player of Oxford, Sam Long was trying to cross deeply. He had a very wide-angle to cross, and, García was at the ball side already, it fell to Harwood-Bellis to defend it.

In other words, there were two tasks for Harwood-Bellis in the following case, defend the target and the zone. In this situation, the 18-year-old was slightly inexperienced as his body orientation was suboptimal. Despite he was doing finely when retreating, however, when he turned to the ball side, he left the target at his blindside. It was fine, if Harwood-Bellis was able to judge the destination of the cross, however, judging the dropping balls was one of his weaknesses. He still had to work on his marking when he was retreating. In this case, he had Claudio Bravo to come out and claim the ball. 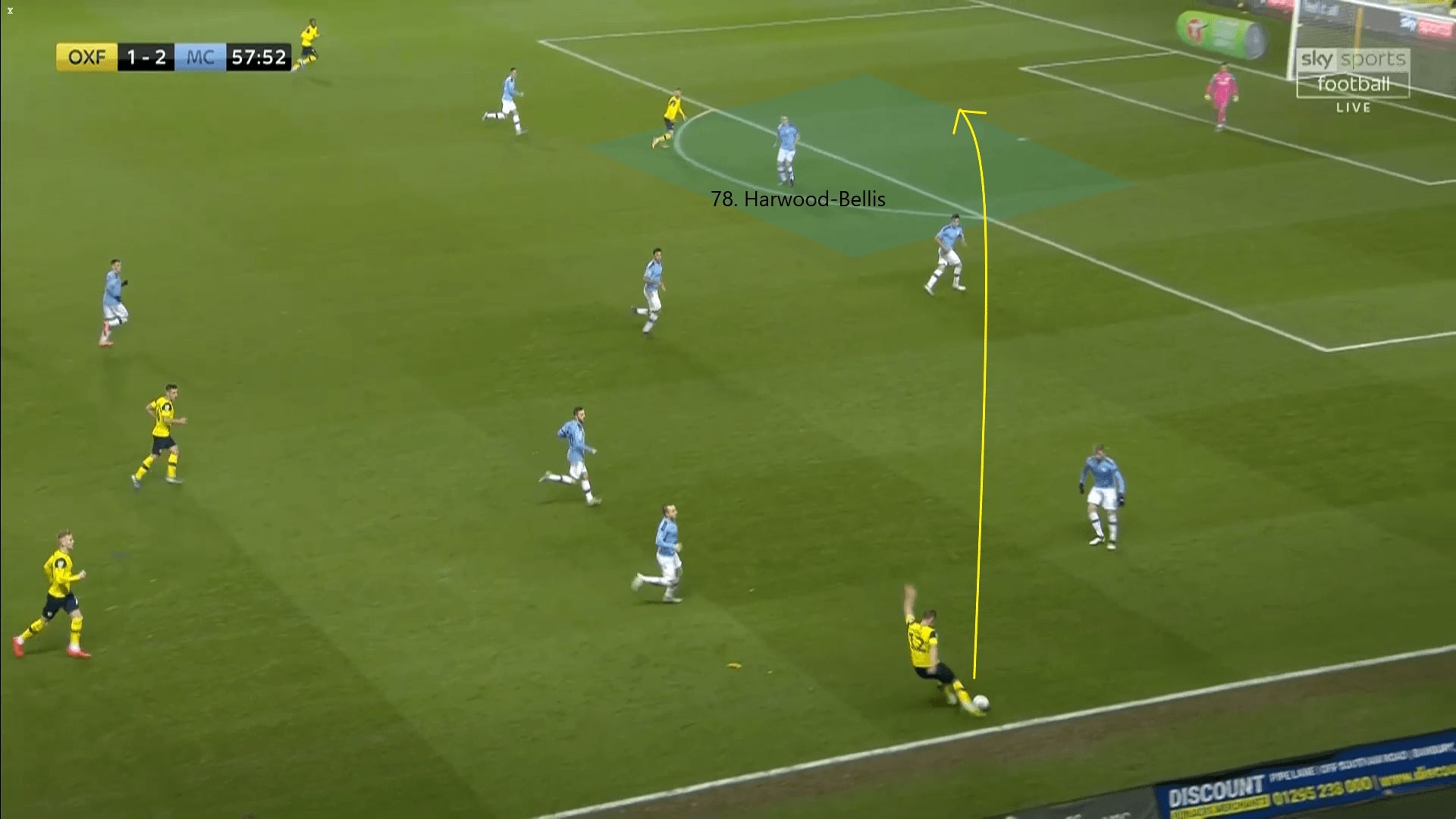 As mentioned in the previous section, the judgement of dropping balls is a weakness of Harwood-Bellis. In most cases, he needs more time to judge where the ball is dropping, and this led to several disadvantages. Firstly, Harwood-Bellis could mistime his jump. As a result, the opponent already jumped earlier, hence, the centre-back was way farther to the ball.

Or, secondly, as shown in the following image, Harwood-Bellis could head the ball first, but the contact will adversely affect the execution. In the process of dealing with this long ball, Harwood-Bellis spent too much time trying to decide the destination of the ball. Under the pressure of opposition, he slightly panicked, and jumped from a suboptimal position. Therefore, despite heading the ball, the contact was not right, and he failed to clear the ball to the sideline. Eventually, the ball dropped to the highlighted area and Scunthorpe United had a chance to attack. 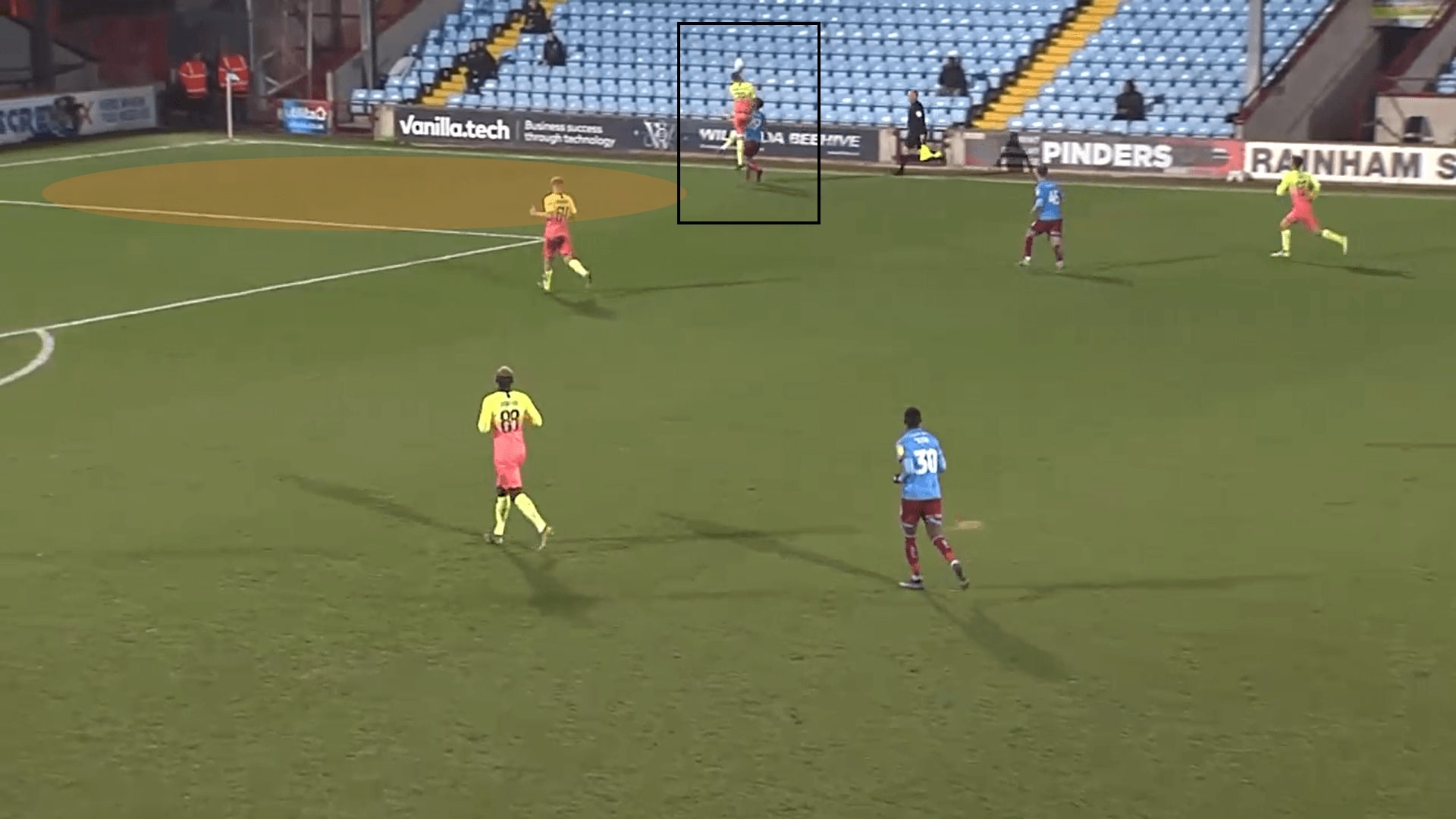 In this example, City were defending from a corner with a zonal system. Harwood-Bellis was protecting the six-yard box. However, given the longer time required to judge, Harwood-Bellis was late to jump. Therefore, Oxford’s Elliott Moore and Rob Dickie arrived first, jumped first, and met the ball first. 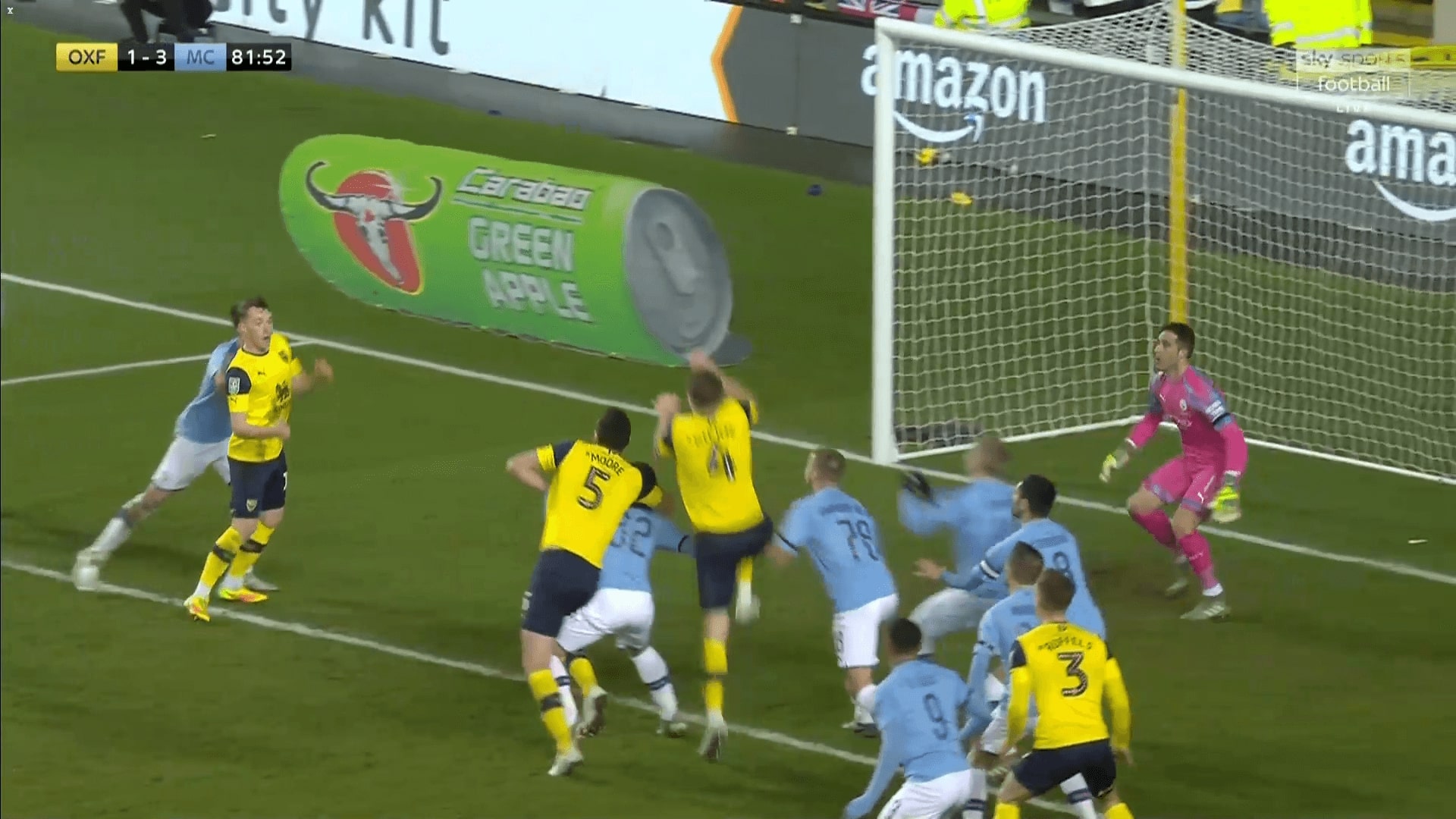 In the last section of the analysis, we would like to point out the practices when Harwood-Bellis was defending with a high line. It was common for City to set an offside trap, as they pushed the players very high. However, it seems Harwood-Bellis is slightly uncomfortable when the team is setting an offside trap.

In this scenario, you could see Vale have the chance to cross deeply. In those cases, it was very common for the City defensive line to push high and make the offensive players offside. However, the only player who was very late to realize the collective defensive action was Harwood-Bellis, as he was a bit too focused on the ball and forgot to push high. Fortunately, in this case, Vale did not cross. 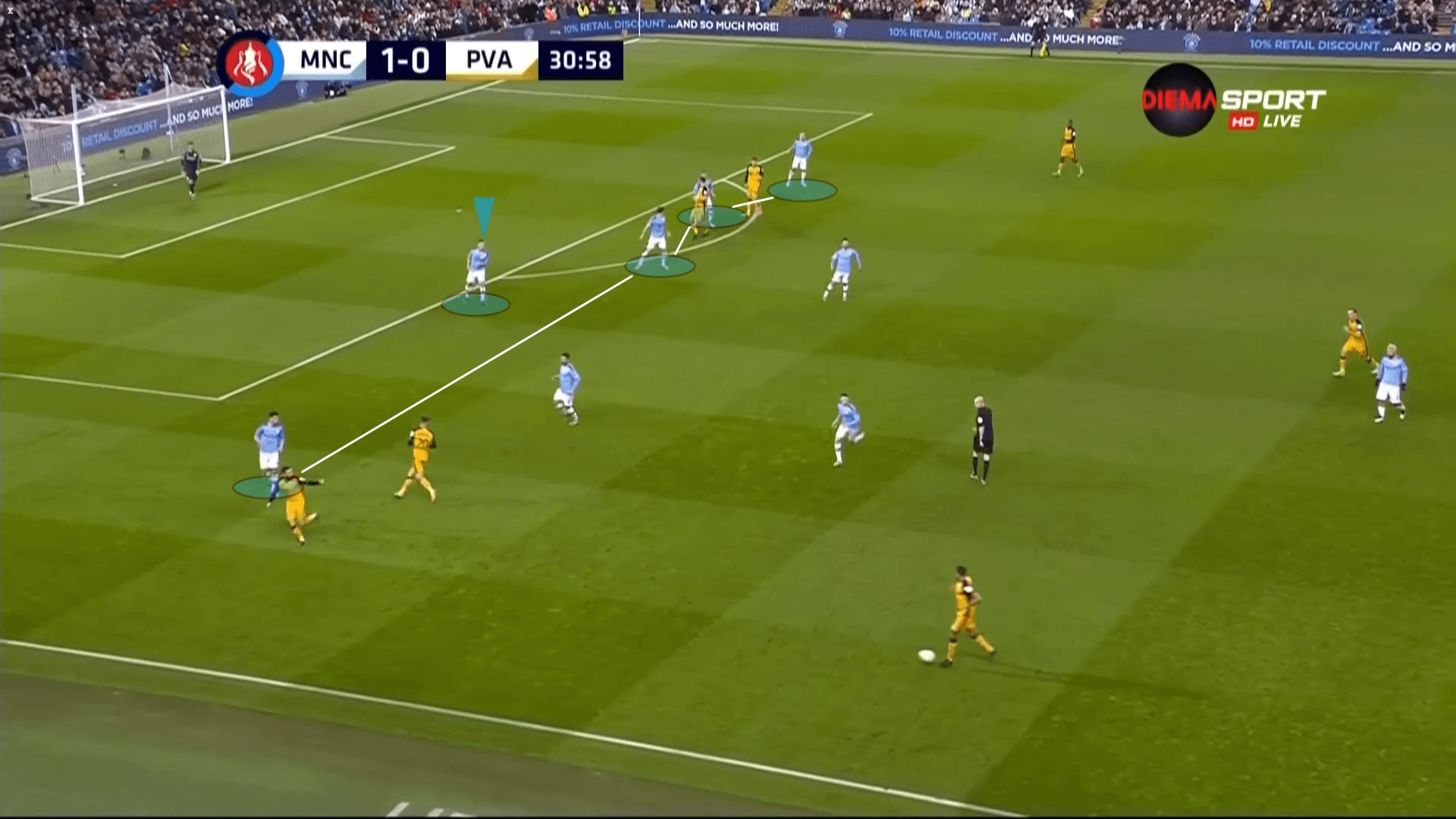 Given the limited games he has played for City, we also took a game between City U23 and Scunthorpe from the EFL Trophy as a reference. It was a competition where they were playing against the first team. When defending, usually, the first action of Harwood-Bellis was to retreat a little bit deeper.

In this situation, despite City U23 setting a high defensive line initially, Harwood-Bellis retreated and kept Kevin van Veen onside. Since he left his partner, Rowan McDonald, he was being overloaded in a 1 v 2 situation temporarily. Harwood-Bellis should have pushed high, pressured the ball carrier and left the opposition behind him offside. 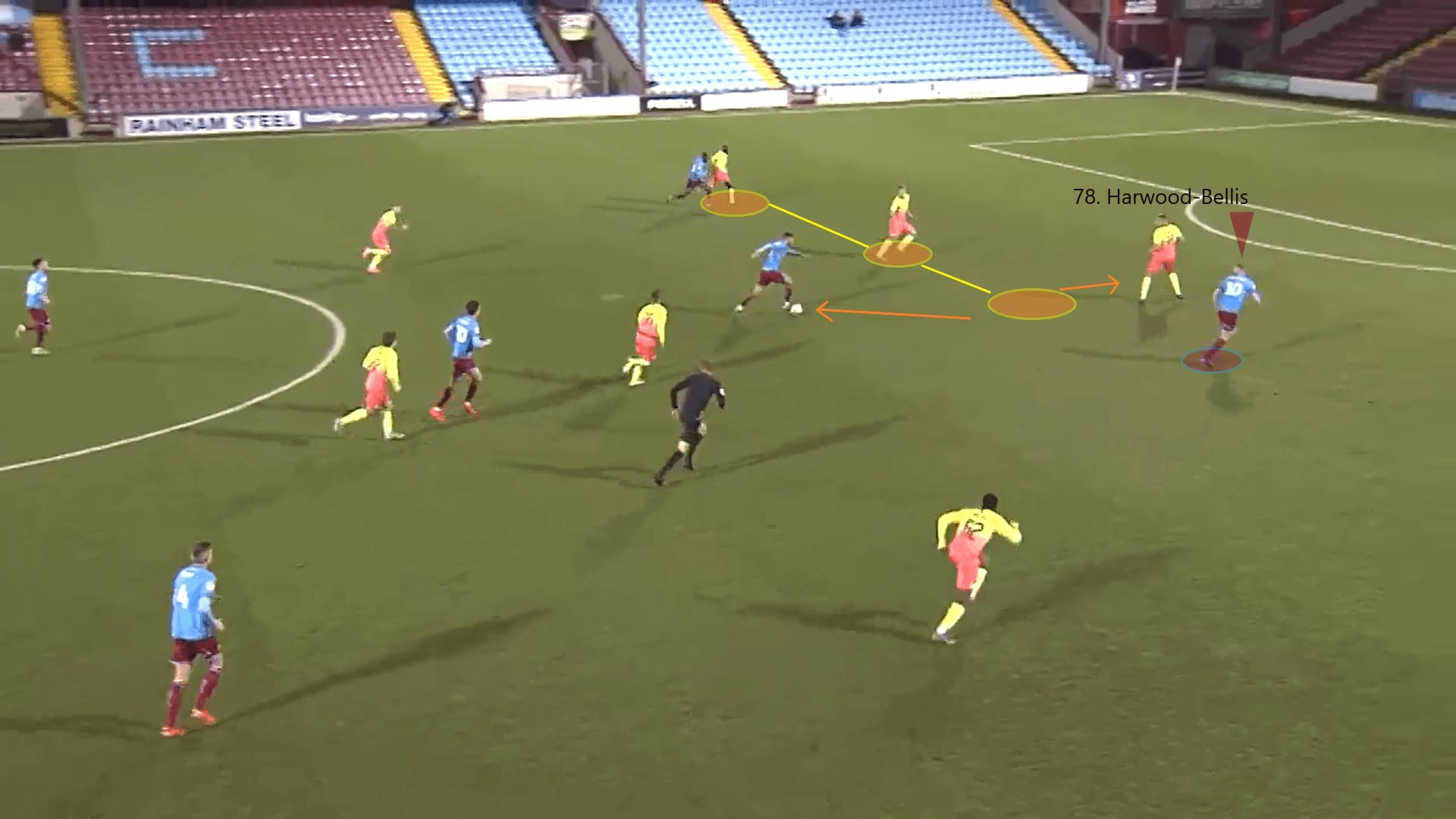 As a young English centre-back who was born in 2002, Harwood-Bellis is talented. The games he played for the first team were slightly comfortable, as City were the dominant team and kept the ball away from the box, thus making Harwood-Bellis’ job easier. It is still early to expect him to start for City often, as he still has some room for improvement. If he wants to play in an intense league like the Premier League, he has to work on his judgement on dropping balls as the second balls are very important in England. Meanwhile, he could be better physically, as, sometimes he would off-balance and be outpaced in 1 v 1 situations. We will see how Harwood-Bellis develops in the future, and how could he gain experience from more matches.