Despite only being 20 years-old, Dan-Axel Zagadou has been one of the key components in Borussia Dortmund’s Bundesliga consistency this year. Admittedly, his emergence was not one that was brought about immediately. For the first 12 matches of the season, a quick analysis shows that Dortmund lined up with four defenders at the back, usually in a 4-2-3-1. During this time, Dortmund were only able to win five of the 12 matches, putting immense pressure on their manager, Lucien Favre. On the 30th of November, Lucien Favre switched his tactics to include playing with three defenders in the back. Consequently, Zagadou, when healthy, has started every single one of those matches.

His role as the left centre-back in the back three has helped solidify Borussia Dortmund’s defence. He has become one of the most consistent starters for Favre, helping guide Dortmund up the table and into second place, four points behind Bayern Munich. This scout report will provide a tactical analysis of Dan-Axel Zagadou’s contribution to Borussia Dortmund’s Bundesliga season, accounting for both his defensive solidity and his ability to contribute when Dortmund are in possession.

Obviously, as a defender, the most important thing that Zagadou contributes to on a consistent basis is Dortmund’s defensive efforts. While his large frame (he stands at 1,96m) allows Zagadou to win aerial duels at a 66.5% rate over his career, his positioning in regards to the back three, or, when Dortmund are more compact, the back five, help make him so effective as a defender. Typically, Zagadou plays on the left side of the back three, with Mats Hummels in the centre and Manuel Akanji on the right side. With this trio, the scenario below often comes into play, especially when teams are attacking quickly, not allowing Dortmund to set up in their defensive 5-2-3 shape. 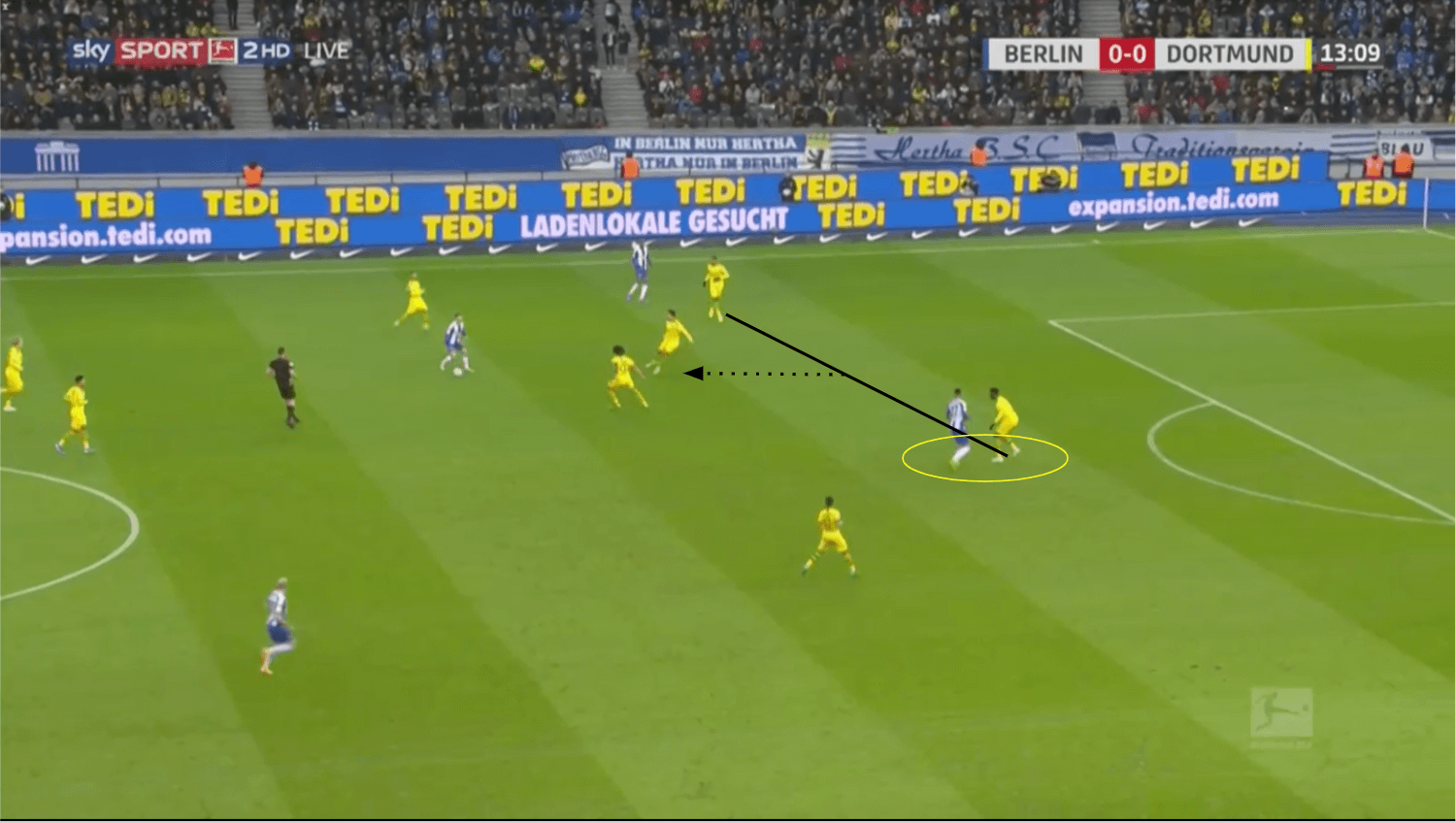 In the image, Hummels stepped up to provide pressure on the man on the ball. As he did Zagadou and Akanji are tasked with two things: mark their individual attackers while simultaneously holding their shape, so that they do not allow Hertha’s players to be played into an onside position. Zagadou was executing both of these responsibilities while also maintaining his concentration on the man in possession, who ultimately played the ball to the man Zagadou was marking, which resulted in a loss of possession for Berlin. While relatively simple, his ability to work within his defensive unit is essential to Zagadou gaining time on the pitch, so it’s important to highlight.

Similarly, Zagadou can also track down individual players and defend on his own. Against Borussia Mönchengladbach, Zagadou was targeted with long balls over the top multiple times. 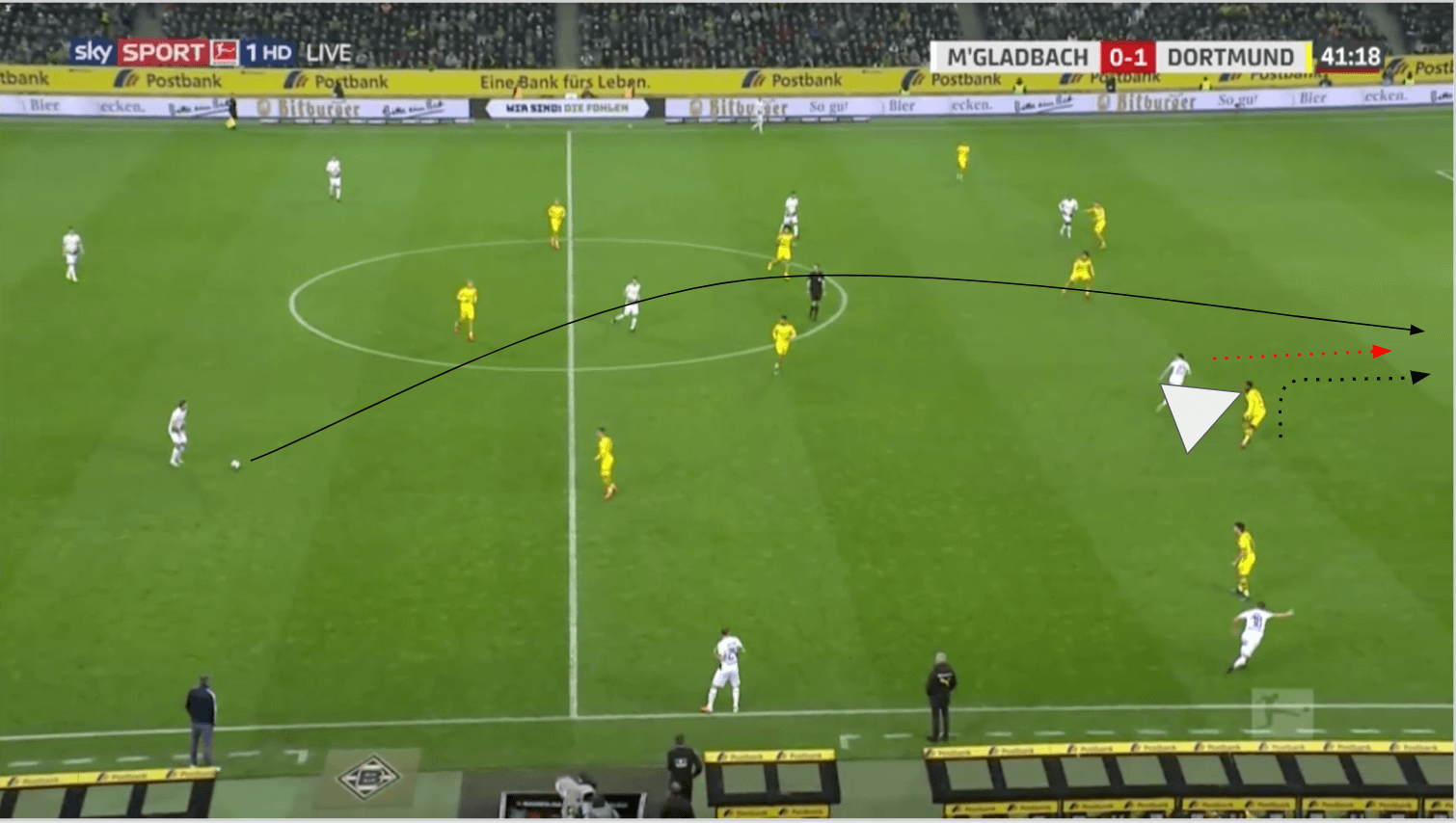 As the centre-back was in possession with no real defensive pressure, Zagadou, as shown above, continued to both watch the centre-back while marking his man, who in this case was Jonas Hofmann. As Hofmann moved to get past him, Zagadou took two steps inside to slow Hofmann down while continuing the track the flight of the ball. This movement and awareness allowed Zagadou to be in the best position possible to win the header, which he would have done if Hofmann had not pushed him out of the way.

Zagadou’s defensive solidity certainly put him in contention to be a consistent starter for BVB. That being said, what makes him one of the first names on the team sheet has to be his ability to contribute to Dortmund’s attack.

Recognition and exploitation of space

One of the most important abilities a modern footballer must-have is their ability to manipulate space. By doing so, they can better help their team progress the ball forward. While this is normally a requirement for attacking players, defenders like Zagadou who can do it allow their teams to build from the back more effectively, creating even more space for attackers to exploit.

The first example, which is a bit straightforward, demonstrates how Zagadou recognises when there is space to be exploited. In the image, Hummels is in possession against RB Leipzig. 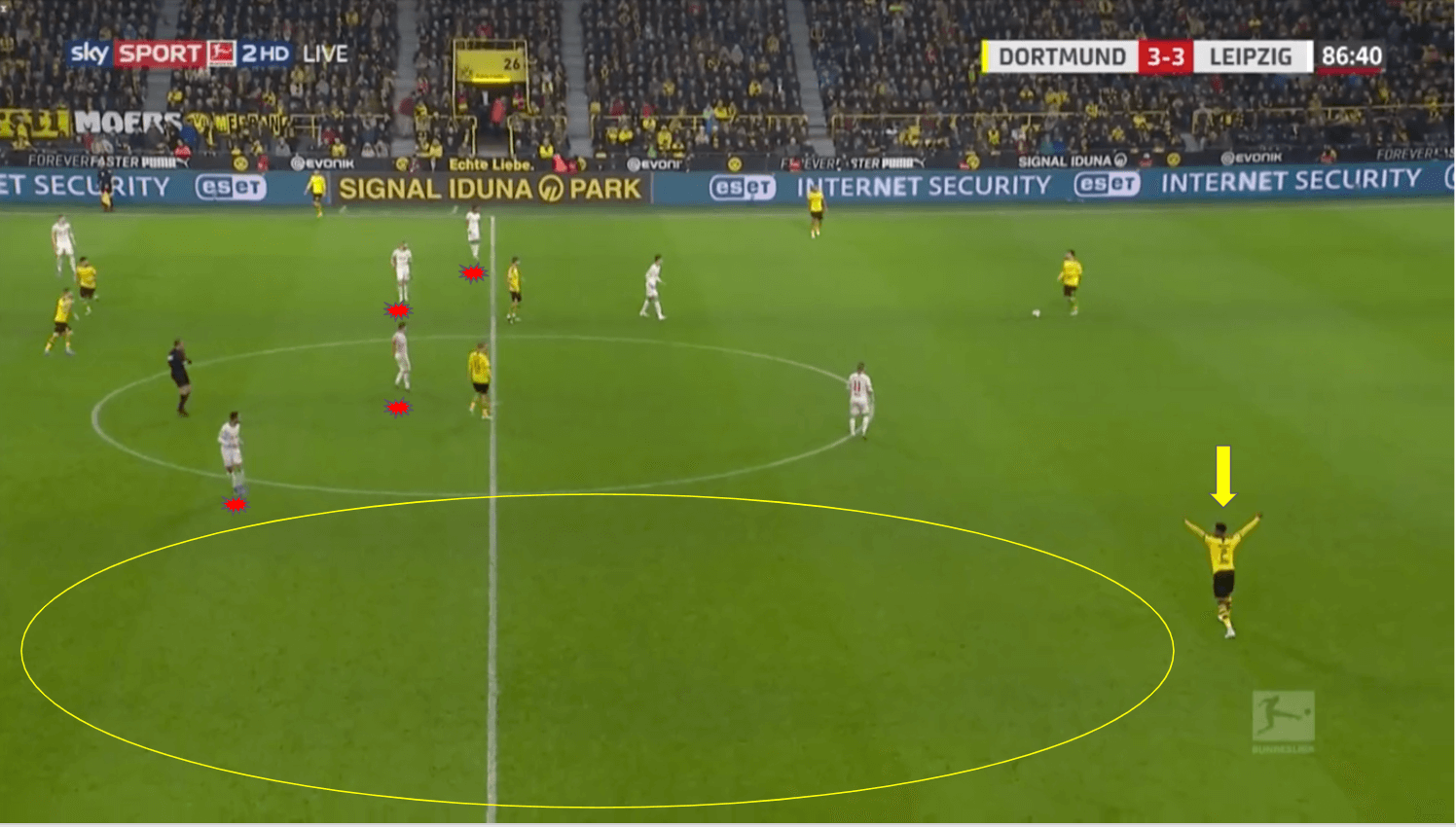 Zagadou was doing everything he could to draw Hummels’ attention because of Leipzig’s positioning. RB Leipzig traditionally defend very compactly under Julian Nagelsmann. In this image, they’re defending in a 4-4-2. While Zagadou has the ability to dribble and take advantage of all the space in front of him, the real reason he was so desperate to get Hummels’ attention is that Nico Schulz was directly in front of him, even more unmarked. Zagadou recognised how much space was available to both of them and tried to get the ball there, but ultimately Hummels opted not to play him.

While his recognition of space is important, Zagadou’s ability to exploit it makes him a key contributor to Borussia Dortmund. The first example comes from Dortmund’s December match against RB Leipzig. 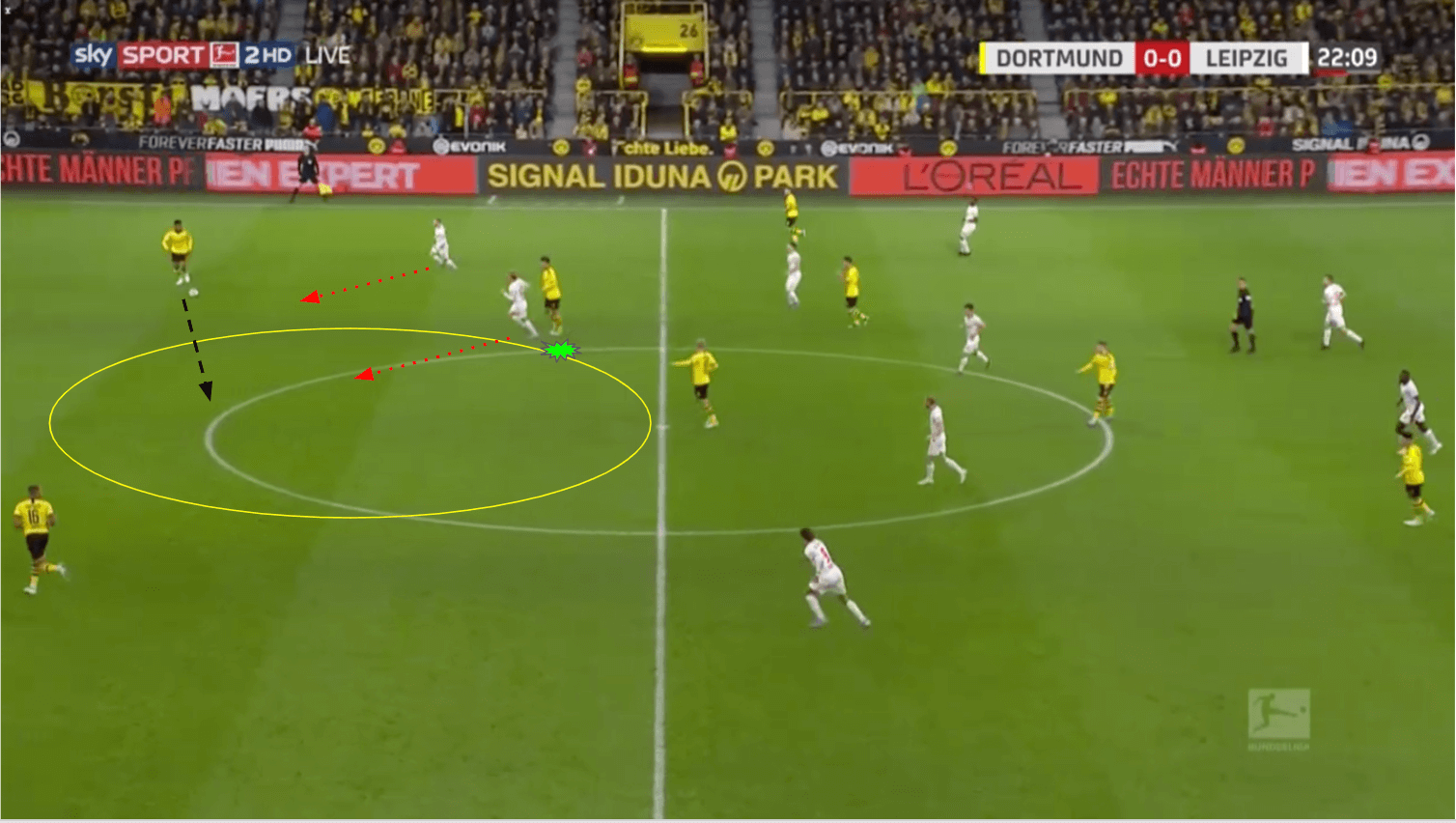 Here, Zagadou recognised the space that was available because Hummels, the centre-back marked with the green, had pressed forward. Zagadou dribbled towards all the space available, bringing two defenders with him as he did. With both defenders applying pressure, this left Hummels open to receive the ball with essentially no pressure. As a result, he was able to play a quick diagonal ball, which, after a few passes, resulted in a Jadon Sancho shot on target. While Hummels pass may attract a lot of attention, it’s Zagadou’s deft manipulation of space that allowed it to occur in the first place.

Similarly, when put under pressure against Leipzig, Zagadou’s ability to recognise and exploit the space allowed his team to progress forward again. 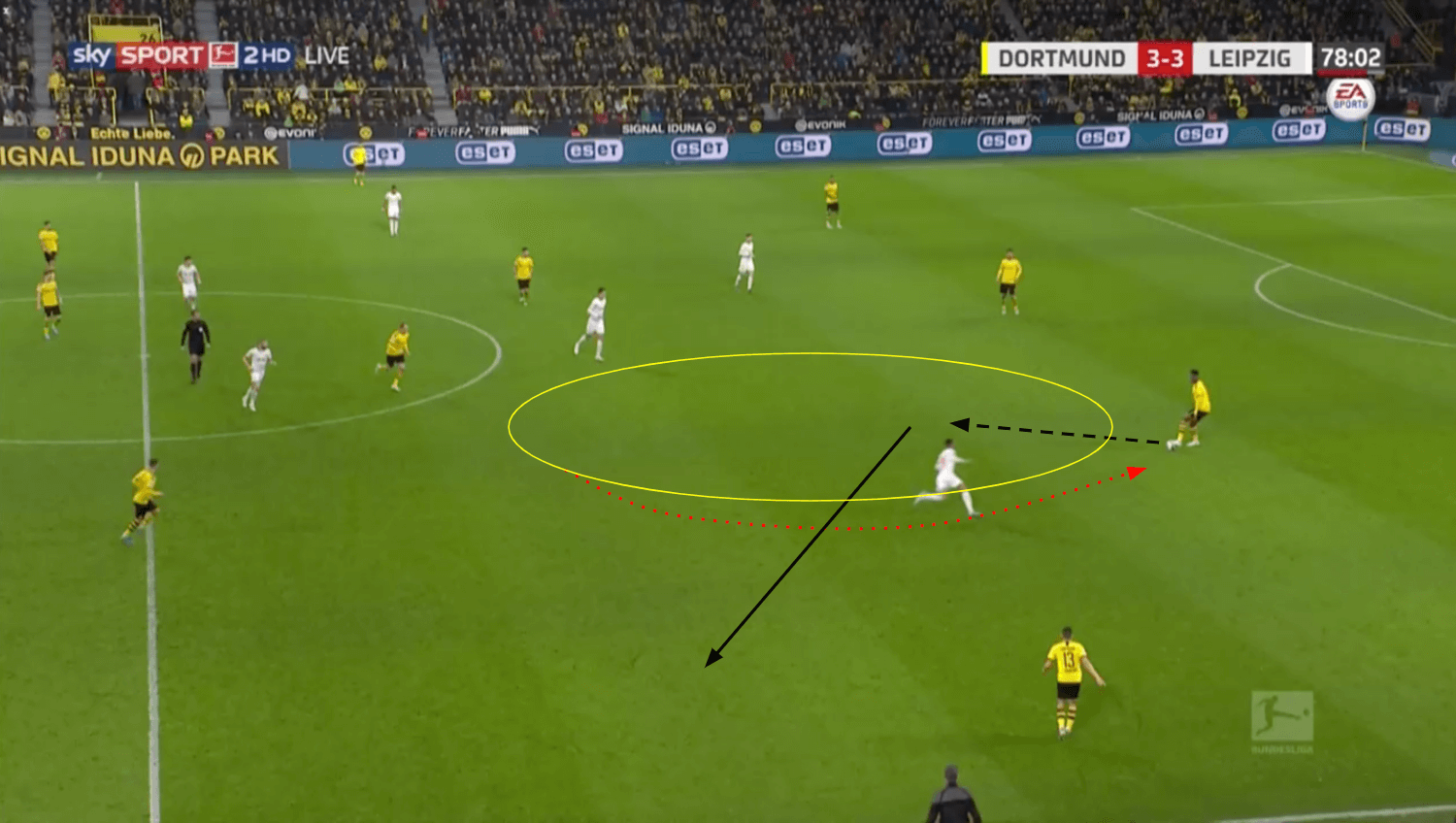 As Zagadou received the ball from Hummels, RB Leipzig’s Matheus Cunha curved his defensive run to force Zagadou centrally, ideally into pressure. However, Zagadou read the situation and understood that there was space to be exploited in the exact direction he was being funnelled towards. Zagadou took two quick touches that allowed him to get into that space in order to deliver a pass to his teammate on the left-wing, who now found himself with even more space and time because of Dan-Axel’s work; his ability to see and exploit the space is exceptional.

Another tool that allows Zagadou to be so effective at manipulating space, particularly under pressure, is his directional first touch. He uses this touch to manipulate opponents by forcing them to pressure him in a certain direction so that he can exploit the space in the opposite direction. This skill is often seen as one of Sergio Busquets’ classic tools, and it’s exciting to see a ball-playing centre-back utilizing the same ability. The first example comes from the match against Gladbach. 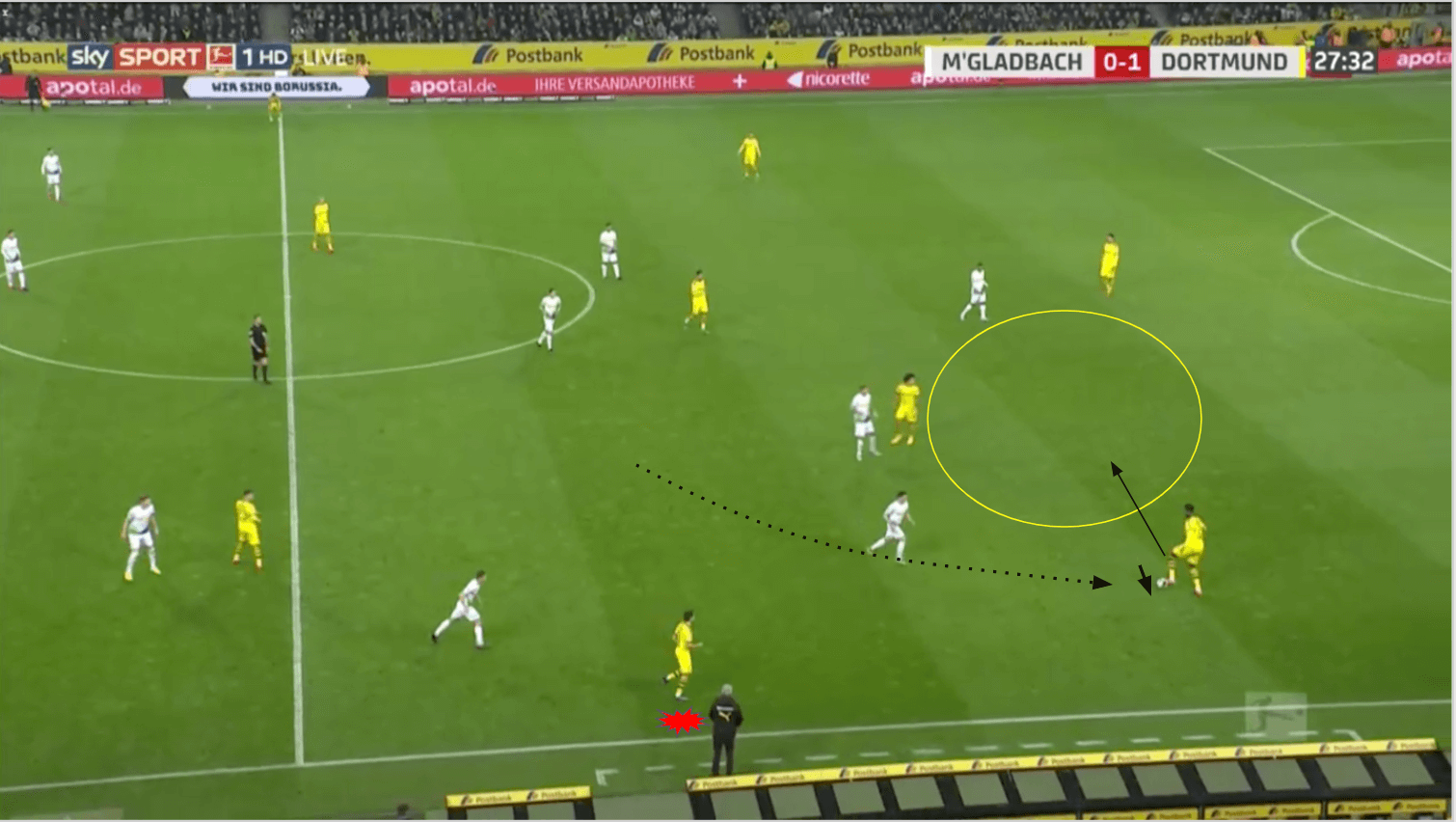 Once again, the ball came in from Mats Hummels. As Zagadou was receiving the ball, he was under immense pressure from the Gladbach defender, who was sprinting at him. Zagadou, seemingly unphased, began opening his hips slightly, indicating that he would be playing his teammate on the wing, marked with the red. The Gladbach defender read this movement and sped up to intercept the pass; however, Zagadou stopped opening up his hips halfway, and he took his first touch towards the centre of the pitch. This created two to three extra seconds of time on the ball for Zagadou, making the selection of his next pass much easier.

This bit of skill is clearly in Zagadou’s bag, and it allows him time and space on the ball. Against RB Leipzig, he did something similar, although this time he was facing his own goal. 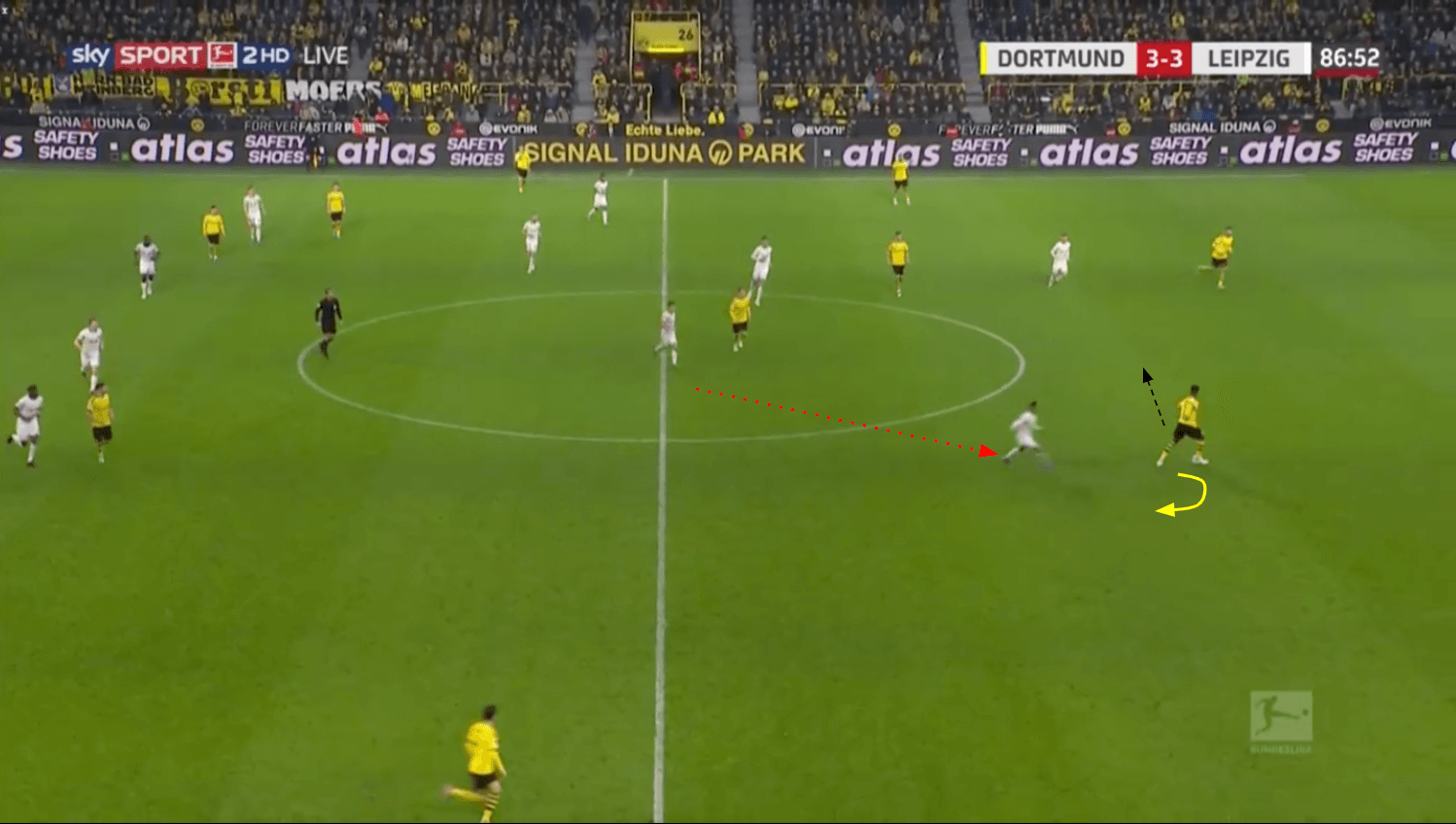 Once again, Zagadou is under immense pressure from  Cunha. This time, Zagadou is facing his own goal as he received a pass from Julian Weigl. Dortmund often looked to exploit space on the wings, so Cunha was anticipating Zagadou trying to find his teammate Schulz on the left-wing. Zagadou, with his back to Schulz, once again opens his hips halfway to make it seem like he is going to turn towards Schulz, who is at the bottom of the image. Cunha bit on this movement, and actually ran past Zagadou, who paused while opening up his hips and took his first touch the other way into space, once again creating time for himself to deliver a successful pass to a teammate.

The last bit of skill that Zagadou demonstrates when in possession also draws a parallel to Busquets and his ability to disguise passes. Similar to the aforementioned directional first touch that often creates space for himself and sends defenders the wrong way, Zagadou also manipulates his opponents by making it appear as if he is playing a pass in a certain direction, only to find a (usually) more vertical and therefore dangerous pass to a teammate. While probably not as deceptive as Busquets’, Zagadou’s passes consistently trick opponents and create options for his teammates. The first example comes from Dortmund’s match against Gladbach. 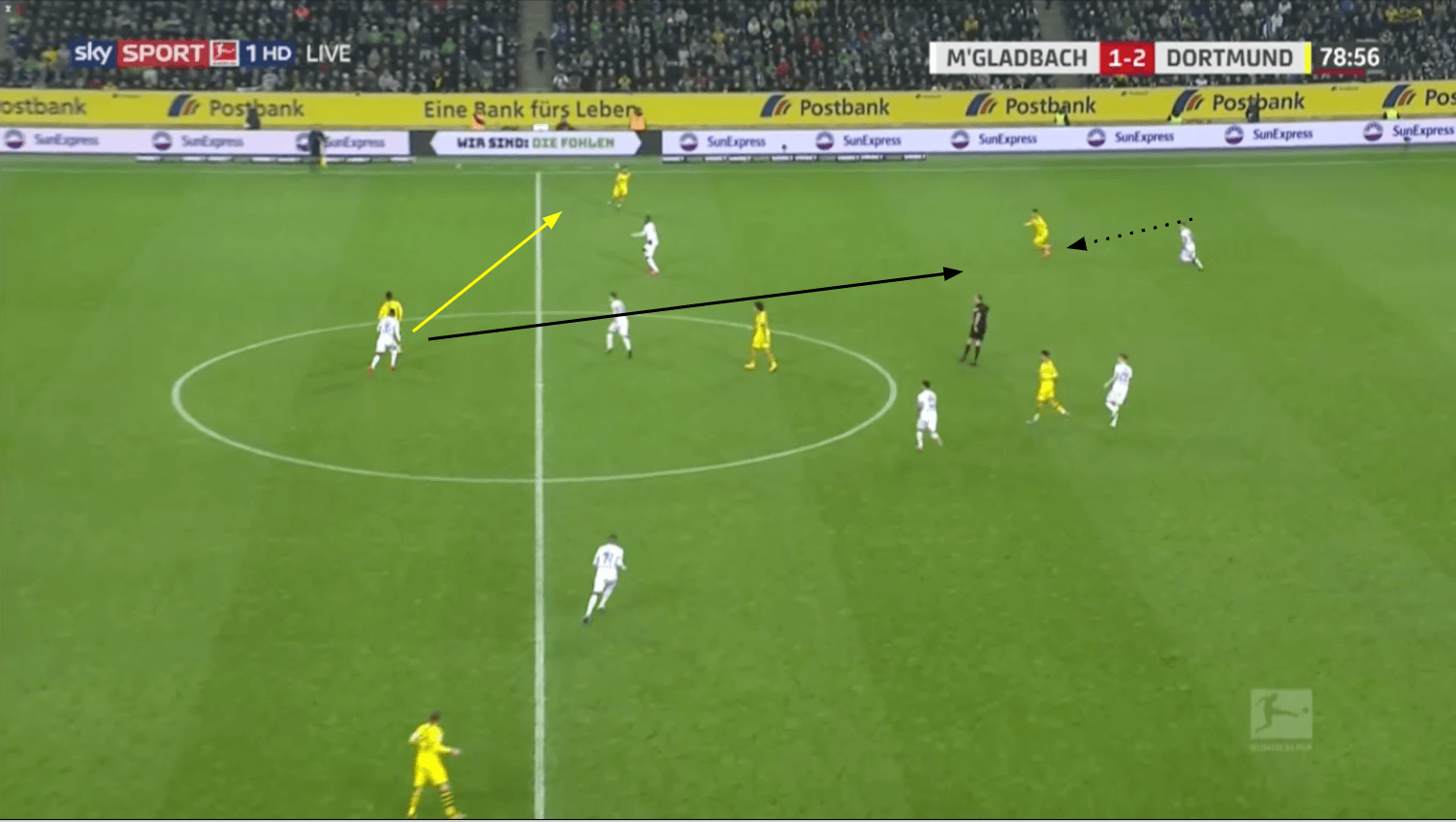 As Zagadou is in possession of the ball, he dribbles horizontally, with his body facing the sideline. The Gladbach players were forcing him in this direction, so they believe that their plan is coming to fruition, which will see Zagadou play the pass in yellow to the man on the touchline. Instead, as Sancho checked to him, Zagadou played the ball across his body with his left foot, easily picking out Sancho when most of the Gladbach team assumed the pass would be played out wide.

Similarly, against RB Leipzig, Zagadou found himself under pressure. Leipzig had done a good job in creating a positional superiority with their four defenders. 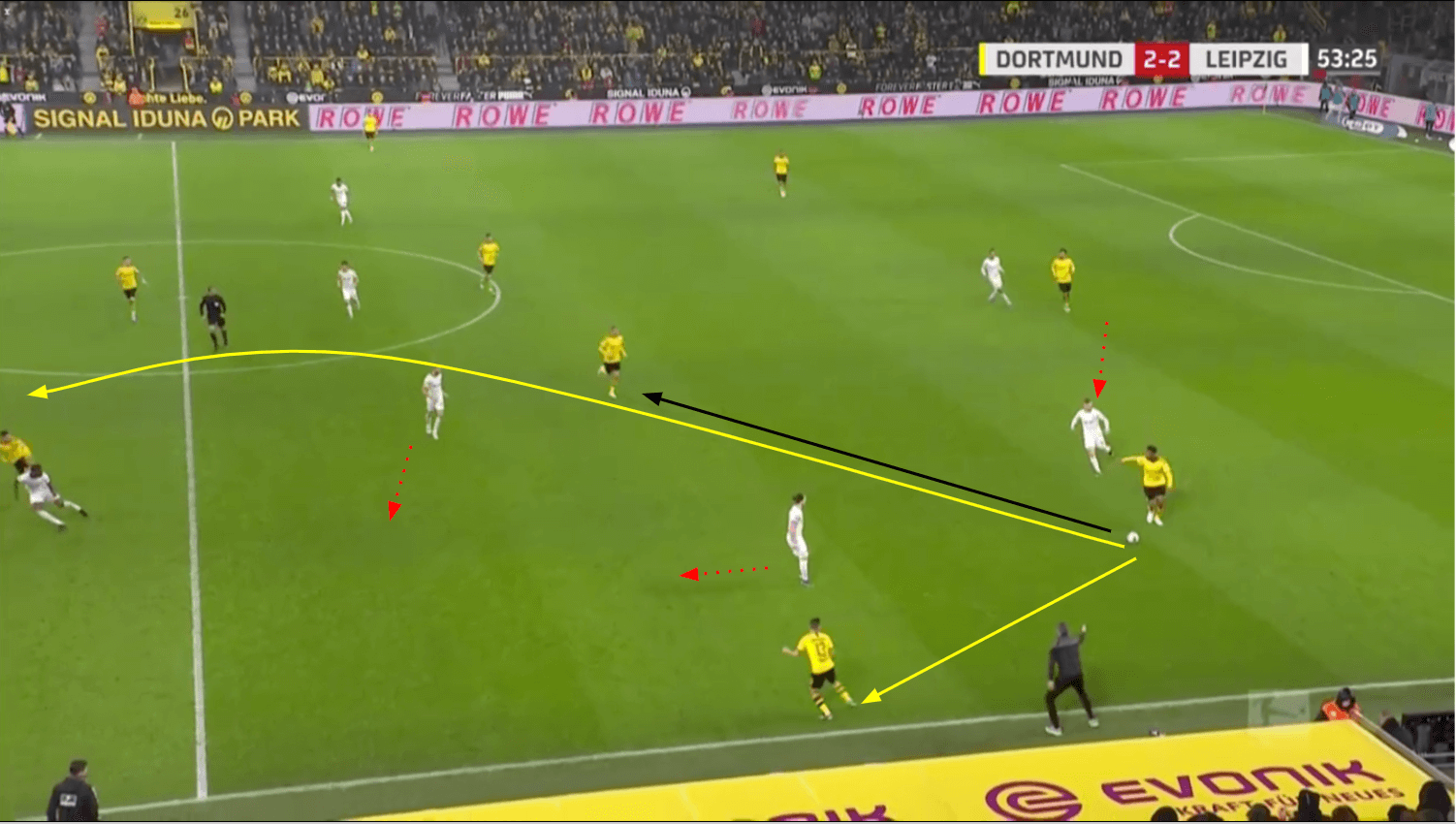 The way in which Zagadou is positioned with his body, with his hips facing the sideline, made it appear that he had two options for his pass, which are highlighted in yellow. He could play his winger, Raphaël Guerreiro, or he could send the ball long to Thorgan Hazard, who was making a run behind the defence. These likely options caused RB Leipzig defenders to drop a bit more, as those were the passes that they expected to be played. As they dropped off, Julian Brandt became more open, and Zagadou’s plan had worked to perfection. Leipzig’s defence fell for his body positioning trap, allowing him to play Brandt (the black arrow), who switched the ball out of pressure, allowing Dortmund to play the ball forward.

Zagadou is another young French talent making a name for himself in the Bundesliga. While he spent time at Paris Saint-Germain in their youth teams, he took the route a lot of young talents have opted for, joining Borussia Dortmund at the age of 17. His emergence as a core part of their back three has helped lead Borussia Dortmund up the Bundesliga table. Once he gets a full season under his belt, he will almost certainly begin to attract the attention of large European sides looking for an intelligent, ball-playing centre-back to build a squad around.