The 2019/20 season was/is clearly one of the best ones in the history of LASK Linz who, after the opening 22 games in the Austrian Bundesliga, sit in first position and have reached the round of the last 32 teams in the UEFA Europa League where they played just the first leg against Manchester United. This game was their last one before the UEL and the Austrian Bundesliga stopped due to the coronavirus.

One reason for the great performances of Linz is the 28-years-old central defender Gernot Trauner who has had one of the best seasons of his career and is also the captain of the team. In this tactical analysis in the form of a scout report, we will look at his role in Linz’s system, his importance for their tactics and his individual abilities.

First of all, before we even analyse his qualities on the ball and during the work against the ball, we need to look at LASK Linz’s system, tactics and his role in the team of the head coach Valérien Ismaël. Linz are one of the very few teams in the Austrian Bundesliga who have one system and formation respectively which always stays the same. While other teams switch their formations from game to game and use different styles of play, LASK stick with their favoured system and also the tactics are almost always the same with slight adjustments depending on the opponent.

The system which Ismaël uses is a 3-4-3 formation and Trauner is the boss of the defence as he is always the central man of the back three. The Austrian defender is the captain of the team and has played in 20 out of the 22 games in the Austrian Bundesliga this season and missed just one game in the UEFA Europa League due to a suspension. These numbers already tell how important the Austrian is for LASK Linz.

In the graphic below we can see his heatmap for his 20 appearances in the Austrian Bundesliga and we can perfectly see that he is mainly positioned in the middle of the pitch, as he is the central defender of the back three in Linz’s 3-4-3.

Also, we can perfectly see in his heatmap that he is often positioned quite high in the middle of the pitch for a central defender. We will look at the reasons for that in more detail later in this tactical analysis when his role during the build-up and his defensive tactics will be topic.

LASK Linz are currently not only among the two best teams of Austria besides RB Salzburg but also are one of the most dominant teams on the pitch. Since their opponents see them now as a top side, it happens more frequently that they sit back and defend deeper. This leads to the situation that Ismaël’s squad are the ones who dictate the game and need to break down the low block of the opposition. This can also be seen in the stats since they have the third-highest (behind RB Salzburg and Wolfsberger AC) value for possession with 56.7% and also the third-highest value (behind the two same teams) for PPDA (passes per defensive action) against them with

Considering this, Linz logically need not just forwards who are strong on the ball, but also deeper positioned midfielders and defenders as they are important for overcoming the oppositional defence. Trauner is not just the boss of the back three and defence respectively as we will see in the last section of this tactical analysis, but also one of the most important players during the build-up.

He plays on average 46.26 passes per game what already tells us that he is among the players who are responsible for organising the circulation of the ball. In his passing map below for the game against Sturm Graz in the ÖFB Cup, we can see that he also plays quite a lot of long balls (on average 7.04 per game). Also, he is positioned quite high and plays several balls to the final third.

The 28-years-old central defender plays on average 21.7 forward passes per game (45.97% of his passes) and 7.9 of them are to the final third. These numbers and the passing map above show us that Trauner is important for the progression of the ball further up the pitch.

However, this still doesn’t explain us why we could see in the heatmap that the Austrian defender is quite often positioned higher up the pitch. For that, we need to analyse his behaviour and tactics during the build-up.

During the beginning of almost every build-up sequence, Trauner is either positioned slightly deeper or on the same height as the other two men of the back three. Then, the three defenders together with one of the two central midfielders circulate the ball until they find an option for a forward pass. However, if there isn’t a real option and additionally the opposition don’t put real pressure on LASK and especially on Trauner, the central man of the back three doesn’t hesitate to take the ball and dribbles forward. This either lures out an opponent and creates a new situation or he has a shorter distance between him and the strikers and can play for example a through ball like in the situation below.

So, the 28-years-old Austrian loves to take the ball and dribble a few yards forward to create a new situation. Of course, a system with a back three is perfect for that since Linz still have two central defenders in the back even though Trauner takes the ball to go forward. This is also one of the two reasons why we can see in his heatmap that he is often positioned higher up the pitch.

As already mentioned above in this tactical analysis, he plays on average 7.04 long balls per game which are a central part of LASK’s tactics. They use them in two ways: firstly, the two wingers often position more centrally near the striker to win the second ball and start the counter-pressing respectively when the defenders try to find them in the centre with a long ball. Secondly, this movement of the two wingers who position in the half-spaces or the centre opens up space for the wing-backs in the wide-areas and especially Trauner tries to find them with through passes to the wide areas as we can see in the shot below. 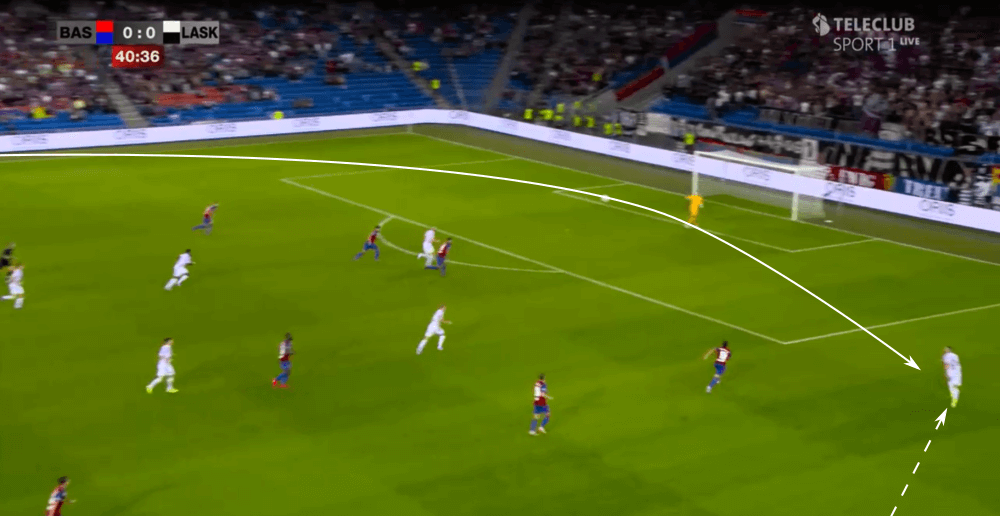 Boss of the defence

So, we saw now in this tactical analysis, that Trauner is one of the players of LASK Linz who are responsible for the build-up and his long balls are an important part of their tactics to progress the ball further up the pitch.

However, even though it gets nowadays more important for a defender to have abilities on the ball and that they need to be able to be a central part of the build-up, their central task is still the defending and to avoid conceding a goal. Trauner is the boss of the best defence this season in the Austrian Bundesliga as they conceded in 22 games just 20 goals (lowest value of the league) and considering this, it’s no surprise that he is among the best defenders of Austria’s top-flight.

The Austrian defender makes per game 7.81 interceptions and one main reason for that is his decent understanding of the game and that he often already knows what the plan of the opponent is before the pass is played like in the situation below when he intercepts the pass of Scott McTominay as he detected the deep run of the EPL Player of the Month February, Bruno Fernandes. 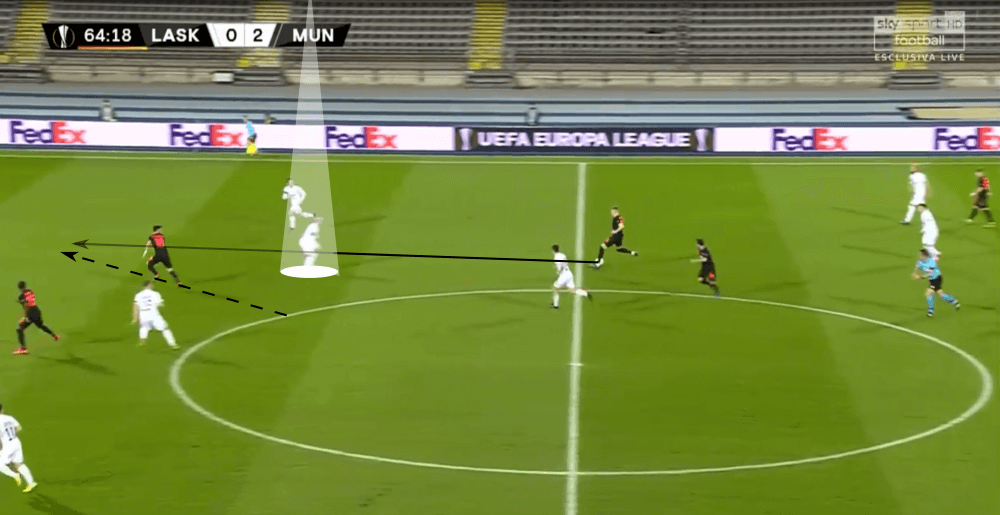 Next, we will see the second reason why he is sometimes positioned quite high during a game what we then can see in his heatmap. Basically, LASK Linz want to defend actively and high up the pitch. They use their high pressing in almost every game and during this press, the defenders are logically also positioned quite high to keep the vertical compactness alive.

Considering this, the back three (and Trauner) is often positioned high, but an additional reason for his high positioning is that he often steps out and follows his opponents when they drop deeper a few yards as we can see in the example below against AZ Alkmaar. He follows the central striker Moran Boadu to then use his body to win the ball what he does quite often. 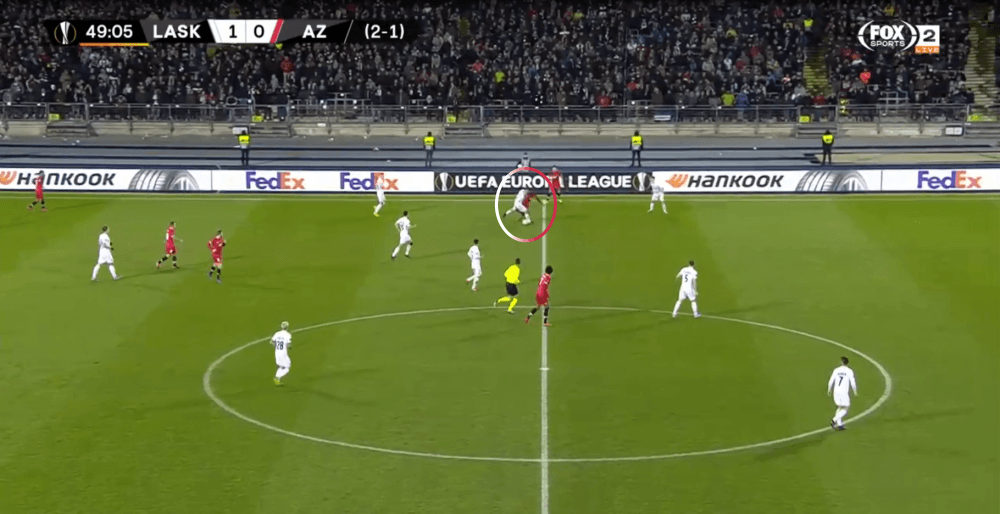 However, the fact that he often steps out in such situations is also extremely risky when the opposition knows how to exploit this like, for example, Manchester United did as we can see in the shot below. Moments ago, Juan Mata dropped deeper and positioned more on the right side what lured out Trauner. The Red Devils exploited the free space in the centre which was created due to the absence of Trauner and Mata scored the third goal of the day. 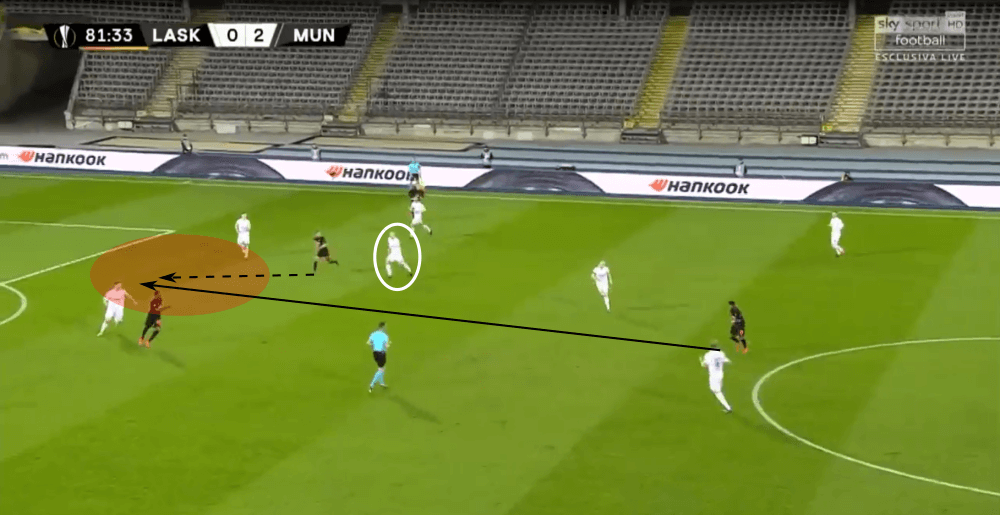 The 28-years-old Austrian wins on average 72.8% of his defensive duels which is a great value and most of them are won by using his body as we already saw in an example above. Meanwhile, he just makes 0.29 sliding tackles per 90 minutes which is logical as he knows that when he makes one and it’s not successful, he has no chance to get back into the duel. However, we can still sometimes see him sliding into a challenge when there is no other option like in the example below. 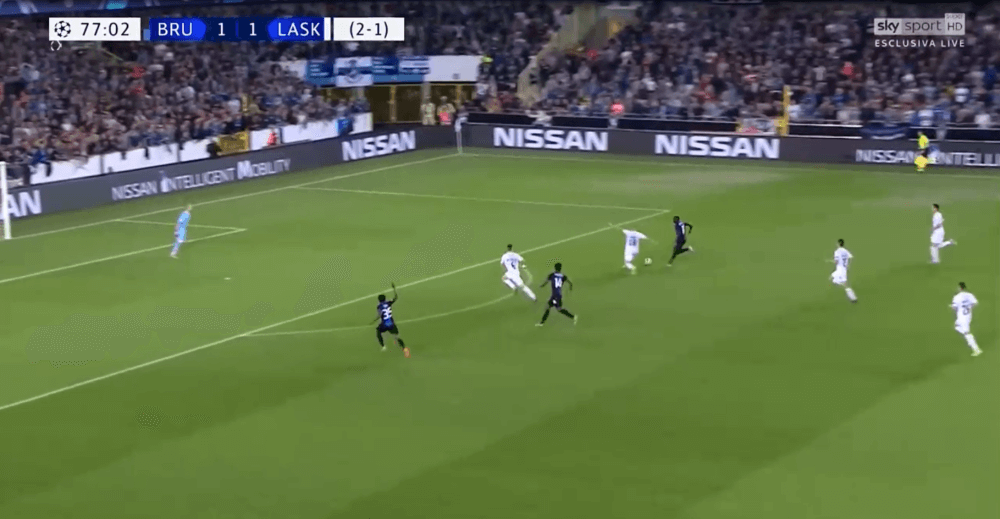 Now, we have seen his qualities on the ball and also why he is important for the defence of LASK Linz. One last point about Trauner is still really impressive and helps his team massively: his ability to win aerial duels. The Austrian wins on average 74.43% of his duels in the air (second highest value of the league) and is among the 10 players in Austrian Bundesliga who are involved in the most aerial duels per game.

However, this quality doesn’t just help him defensively, but also when it comes to creating dangerous situations as LASK is among the most dangerous teams in Austria when it comes to set-pieces and especially their throw-ins are incredibly dangerous. It’s often Trauner who is positioned at the front post to then win the aerial duel and bring it to the centre where a teammate can score like in the example below.

Looking at the abilities of Trauner, it’s quite surprising that he only has one appearance for the Austrian national team. However, with the performances which he showed this season, it’s probably just a matter of time until he gets called up for Franco Foda’s side.

The 28-year-old defender is strong on the ball and also great when it comes to the defending. Still, he needs to work on his decision-making since sometimes, it’s not that clever that he steps out to follow his opponent, as we saw in this scout report. Besides that, he’s clearly among the most complete defenders of the Austrian Bundesliga.