WSG Tirol 2019/20: Their improvement after the winter break – scout report

From July to December the first season of WSG Tirol in the Austrian Bundesliga wasn’t really enjoyable for them. They collected just 12 points in the opening 18 games of the season and lost six games in a row before the winter break arrived. When they finally got their break at the end of December, their last win was on 26 December against Austria Vienna.

Then, they brought four new players in during the January transfer window and switched to a new system and new tactics. In this tactical analysis in the form of a scout report, we’ll take a closer look at their style of play after the winter break and I’ll try to explain why they are so successful since the league kicked off again.

During the first part of the season, the team of head coach Thomas Silbersberger (who’s been the coach since 2013 when they played in the third Austrian division) used different systems. In some games, they played with a back four and in other ones they had three defenders in the back. Sometimes Silbersberger lined his team up in a 4-2-3-1 and in the next game in a 3-4-3. In light of this, you could definitely say that the squad never got used to one particular system.

As already mentioned in this scout report, during the first part of the season, they had 12 points after the first 19 games what means that they got 0.63 points per game. In the four games after the winter break, they won two times, drew once and lost against Rapid Vienna which is no shame as they are currently in an incredible form. Therefore they made 1.75 points per game which is really impressive. Considering this, the big question now is how their system and tactics look like after the break in December and January.

First of all, they now played with a 4-4-2 formation in every single game with almost the same players. There were some adjustments from game to game but overall, the squad stayed almost the same. Also, all four players which they added to the team, are an important part of the squad. Their new right-back Koch joined them from Sturm Graz, the centre-back Bruno Soares got bought from the Malaysian club JDT, the central midfielder Thanos Petsos was out of contract since the start of the season, and Stefan Maierhofer joined them from Aarau. The last two are especially well-known in Austria as both had already great times at Rapid Vienna.

So, in the graphic below we can see their usual starting 11 of the last four games before the Austrian Bundesliga had to pause due to the coronavirus pandemic. 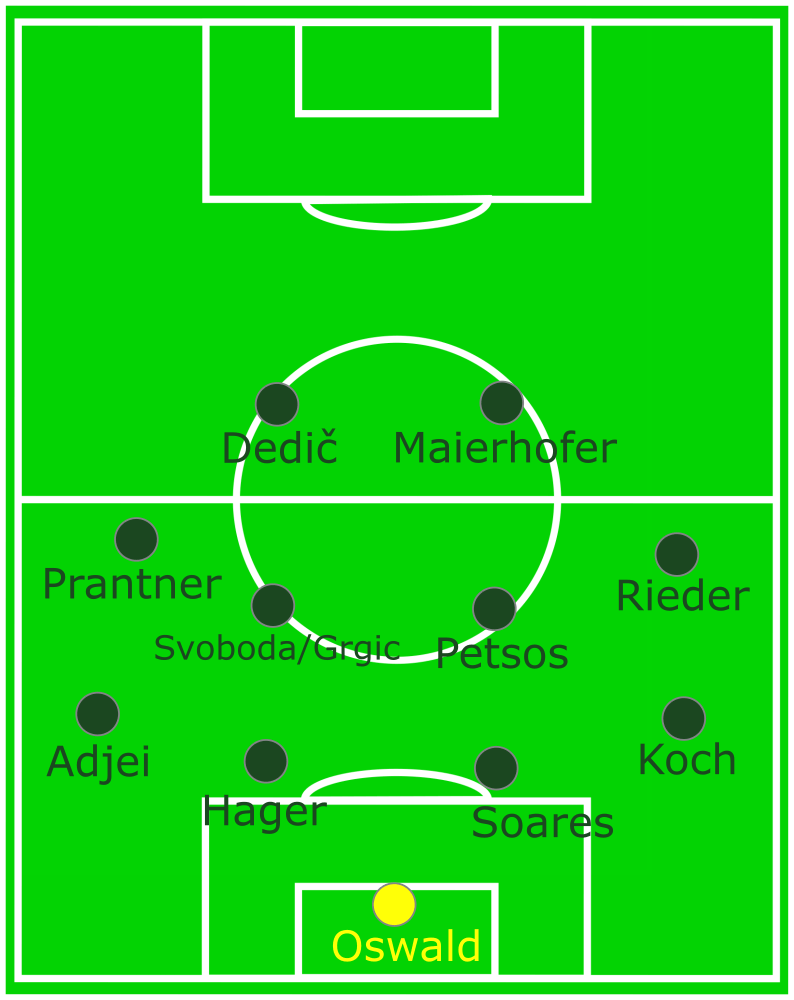 For the remaining sections of this tactical analysis, we’ll look at the tactics WSG Tirol used during the last four matches. Basically, when they were out of possession, they rarely used a high and aggressive pressing which is logical as neither Maierhofer nor Zlatko Dedič is made for that kind of defensive style of play. Maierhofer is 37 years old while his partner Dedič is just two years younger.

Due to that, WSG Tirol mostly sat back deeper with their two banks of four and the two strikers put pressure on the opposition at about the halfway line or sometimes even deeper. Whenever you use this kind of defensive tactics, which for example helped Atletico Madrid to beat Liverpool in the UEFA Champions League, you need to minimise the distance between the players and the space between the lines too.

In general, Tirol did quite well within the last weeks when the opposition were in possession of the ball but still, you often saw that they need more time. However, that’s completely understandable as you can’t expect that their work against the ball to be perfect after such a short time with a new system and four new players in the squad. Yet with these circumstances, they defend much better compared to their performances before the winter break.

Their greatest problem whenever the opponents have the ball is clearly the space between the midfield line and the four defenders. For example, Rapid Vienna exploited that space several times but their other opponents also easily entered this space too often. Tirol certainly must work heavily on this part of the defensive tactics as it caused them the most problems in the last games, but you always have to consider that they already do clearly better than during the months from July until December.

Their tactics in possession are extremely fluid due to the four midfielders and the two full-backs as we’ll see in the following sections of this tactical analysis. Prantner and Rieder who were in the last three games as wingers on the teamsheets are both central midfielders. Due to that, it fits them perfectly that they are allowed to drift to the inside and occupy the half-spaces while the full-backs have the freedom to push forward. Furthermore, this also makes sense as Felix Adjei and Koch are both quite offensive-minded full-backs.

In the example below, the two strikers and the wingers are positioned on the left side and the centre respectively which leads to the occasion that the right-back Koch has a huge free space in front of him which he tries to exploit with a deep run. He receives a through ball and scores seconds later with a decent shot. 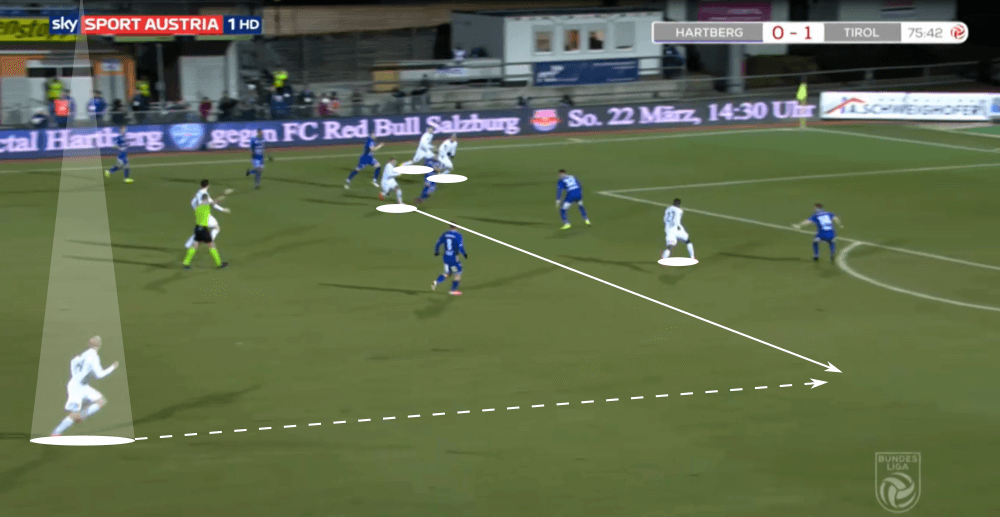 Now that we saw the basic principles of the tactics WSG Tirol use, we will now take a closer look at what roles the new signings Petsos and Maierhofer have within the system of Silbersberger.

Between 2013 and 2016 the Greek international was a player of Rapid Vienna and clearly one of the very best central midfielders of the Austrian Bundesliga. Week in and week out he showed great performances which then led to a transfer to Werder Bremen where he never really was able to show his talent. He joined Fulham on loan and also returned to Rapid on loan for one season but was just unable to show what a great player he can be. Since the summer of 2019, he was out of contract and then WSG Tirol signed him in this winter transfer window.

Petsos until now played every single minute on the pitch and in the central midfield next to Lukas Grgic or Michael Svoboda. In the work against the ball, the tasks of the two central midfielders were always clear. Grgic or Svoboda were the men who stepped out of the midfield four to put pressure on the opposition while Petsos stayed deeper to cut off the passing options through the centre as we can see in the example below.

During the build-up, Petsos is probably the most important player of Silbersberger’s squad as one of his greatest strengths is clearly the organising and structuring of the build-up. Sometimes he stays together with the other central midfielder in the central area in front of the back four to support the centre-backs while the full-backs push forward and then he also often drops deeper to create a back three with the central defenders. This depends on the system and tactics of the opposition. For example, in the game against Admira who played with two strikers, he dropped occasionally deeper to avoid that his central defenders would find themselves in a 2 v 2 as the full-backs were positioned so high up the pitch. This can be seen in the shot below.

We already talked about the flexible positioning of the wingers and the full-backs. The combination of the movements that the wingers run into the centre to position in the half-spaces while the full-backs make vertical sprints down the touchline provides Petsos often perfect options for long balls. Additionally, the 28-year-old generally loves to play such long passes as we can see in the example below in which he finds the right-back, Koch, after Rieder’s movement into the centre. 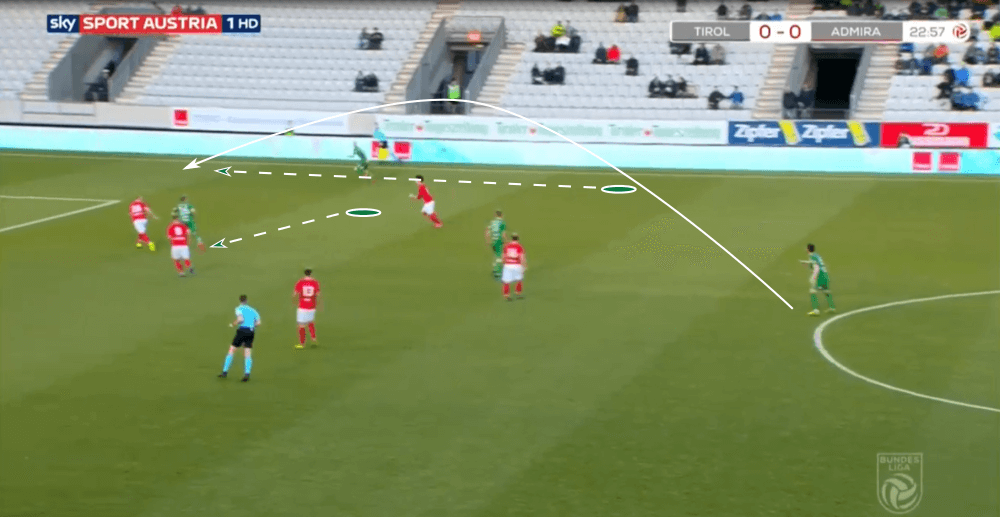 Now in the final part of this tactical analysis, we’ll take a closer look at their tactics in the final third and the creation of goalscoring chances respectively.

Of course, Maierhofer plays a central role in these situations. The Austrian striker is famous for his height as he stands at 6’7”. Due to this, it’s no surprise that they often try to find him and Dedič upfront with long balls either during the build-up or the moments of offensive transition as we can see in the example below. 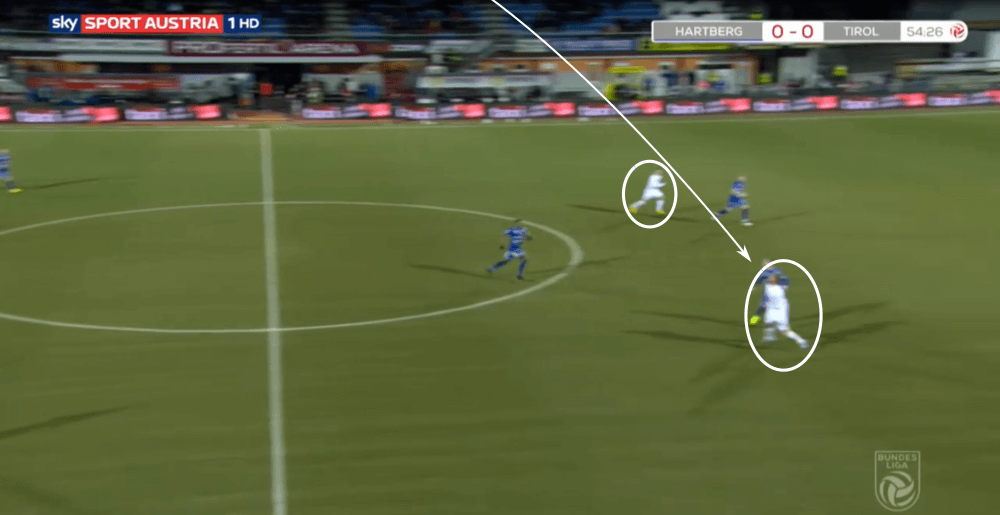 Anyways, it’s no surprise that just one of their eight counter-attacks in the four games after the winter break led to a shot as these two are clearly not the ideal players for counter-attacks.

However, it’s quite interesting to see that Maierhofer and Dedič already harmonize that well even though they play together just for a few weeks. As the Slovenian is 35 years old and his Austrian partner is 37 years old, it’s no surprise that they aren’t the fastest ones and that it would make no sense to try to find them with through passes.

Both men are strong in the air and have a good feeling for their positioning in the penalty box. Considering these two aspects and the fact that WSG Tirol have on each wing two players who can deliver great crosses, it’s no surprise that these are one of their most important tactics and ways to create dangerous situations.

In the situation below we can see an example which shows that both have enough experience to already know after a few weeks together how to create space for one and another with the aid of good movements ahead of the cross. 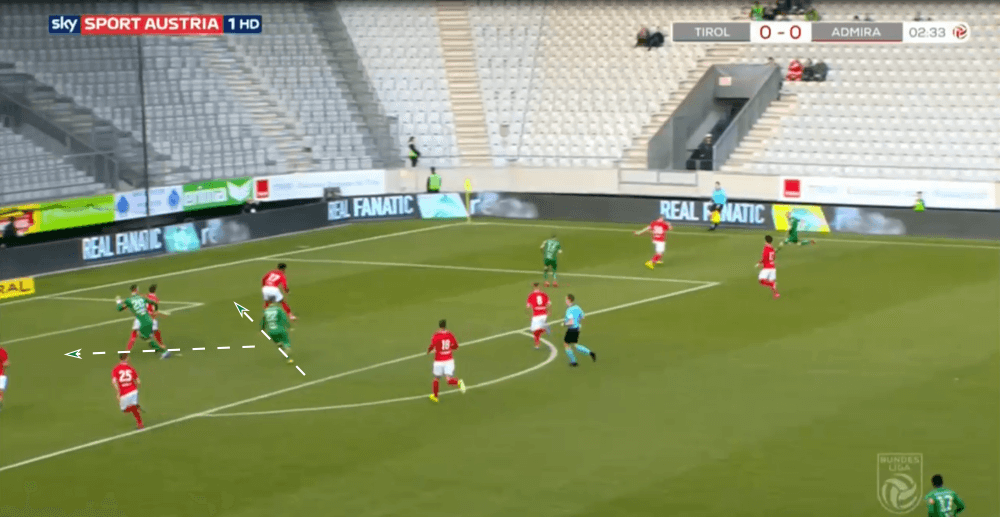 Also, another thing that is quite interesting to watch is ahead of the deliveries into the box. Since the wingers are, in general, positioned quite narrowly during the build-up, it makes sense that the wide-player from the opposite side joins the two strikers in the penalty box ahead of the cross. So, in the example below, the left-back Adjei brings the ball into the centre and the right-winger Rieder supports the two strikers in the penalty box to have one more body in the dangerous area in front of the goal.

To put it in a nutshell, the greatest improvement compared to the first part of the season is probably that they finally have one system and one clear style of play. Even though they don’t play a “modern” version of football as they neither press high up the pitch or use fast counter-attacks, it’s really entertaining to watch them since it’s great to see when a team works as well together as they do.

They really need to work on their tactics out of possession as the space between the two defensive lines is often way too big and gives the opposition easily the chance to enter it. Anyways, if they can improve in this area, I don’t think that they will get relegated within the next seasons.