RB Salzburg currently sit in the second position of the Austrian Bundesliga behind LASK Linz. This is quite unusual for them as they dominated the league within the last few years and 2012/13 was the last time that the winner of Austria’s top-flight wasn’t RB Salzburg as back then Austria Vienna became champions.

Ahead of the winter-break, Jesse Marsch’s team were in the first position of the Austrian Bundesliga and additionally in the round of the last 32 of the UEFA Europa League as they finished in the third position in the group stage of the UEFA Champions League.

However, after the winter break, they won in the ÖFB Cup against Amstetten from the second division but then just got one point out of their first three league games and were eliminated from the UEFA Europa League by Frankfurt.

Now, they won their last two games in the ÖFB Cup and the Austrian Bundesliga respectively, but still, it seems as they would have some problems in defence. In this tactical analysis in the form of a scout report, I’ll explain why the injury of the right-back Rasmus Kristensen causes them some problems.

No matter which system they play, the tactics and style of play of Salzburg always stay the same. The two preferred systems of Marsch are a 4-4-2 or a 3-5-2 in which the positioning of the three central midfielders is quite flexible. Whenever they play with a 4-4-2 or a 4-diamond-2, the two wingers are positioned centrally and occupy the half-spaces during the periods of possession.

Considering these aspects, no matter if they play with a back four or a back three, the full-backs and wing-backs respectively are the only men who provide width and are positioned wide. In light of this, it’s logical that you expect from these players to support the offensive players and provide them passing options to the wide-areas.

This season, Salzburg’s style of play became even more famous in Europe as they showed some great performances in the UEFA Champions League against the likes of Liverpool, Borussia Dortmund and Genk.

They want to play actively with and without the ball and are, especially in the two moments of transition, extremely good as they mostly start counter-pressing immediately after losing the ball. After winning the ball back they try to use their pacey players to get forward as quickly as possible.

During the periods of possession, they often overload the centre and then either use the combination of short passes and deep runs to get through the centre or try to use the space on the wings with the aid of the higher positioned full-backs and wing-backs respectively.

Out of possession, we can almost always see similar tactics as in the moments of defensive transition they use a high and aggressive pressing.

So, considering all their tactics in the four phases of a game, you can clearly say that firstly RB Salzburg are a team against which it’s pretty hard to play against and secondly the men in Marsch’s squad need to be physically extremely strong.

The right-back Kristensen is injured since the start of December 2019 and missed the last game ahead of the winter break and every single one in the year 2020. It’s not clear yet when he will return, but we will now compare him to the two players who replaced him in his position since his injury: Patrick Farkas and Albert Vallci.

When we just look at the stats for the games in this season’s Austrian Bundesliga in which Kristensen was part of the starting XI (nine times), they got 2.33 points per game. In the last five league games in which he wasn’t available, his team just collected on one point on average per match. So, we already see that they miss their Danish right-back. However, when we look at their conceded goals, it’s even more astonishing. When Kristensen was part of the squad, they conceded on average 0.77 goals per 90 minutes while in the last five games their opponents scored on average two times per match.

So, now we will have a short look at why the Danish defender is quite important for the tactics of RB Salzburg and in the other two sections of this tactical analysis, I’ll analyse Farkas and Vallci to compare them to Kristensen.

The 22-year-old, who they bought at the start of this season from Ajax Amsterdam, is surely among the most athletic players in the whole squad of RB Salzburg. The majority of the men in March’s team are physically strong, but Kristensen is really outstanding. He has solid acceleration, is fast, physically strong and has the stamina to run the right-wing up and down for 90 minutes. Considering this, we can often see how he supports his teammates with deep runs, and he tries to exploit the space on the wing. We can see an example below in which he sprints forward to make use of the free area in front of him as he receives a pass from Dominik Szoboszlai. 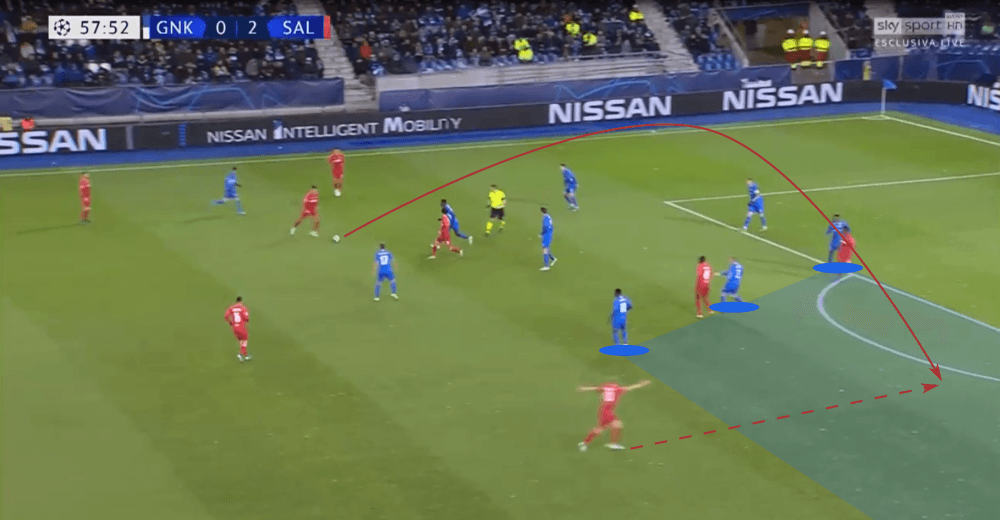 Also, his physical abilities help him in his defensive duels as it’s almost impossible to beat him when he’s in a full sprint. Besides, he’s an extremely aggressive player in the direct duels and is strong in one-on-one situations. This is also clearly one of the factors why RB Salzburg have so much better values for their conceded goals in the games in which he played compared to the ones he missed.

The 22-year-old also has got two major weaknesses, which is no surprise as he’s still quite young and part of RB Salzburg just since the summer of 2019. The first problem is that he still needs some time to fully adapt to the tactics of RB Salzburg. Of course, he showed some decent performances in this season and with his physical qualities he perfectly fits into the squad, but he needs to work on his positioning as he often doesn’t provide enough width due to a too narrow positioning as in the example below.

His second problem is his technique which is just average and not on a really high level. We can often see that he has problems on the ball and he clearly needs to work on that. If he can improve his technical abilities and combine them with his pace and acceleration, he can be an even greater threat for the opponents.

At the start of this season, Farkas and Kristensen were the two men who took turns at playing as the team’s right-back and right wing-back respectively. However, in October the Austrian had a stroke and had to pause until the winter break. In the first game after the winter break against Amstetten in the ÖFB Cup, Farkas made his comeback.

The 27-year-old is the only right-back in the squad of RB Salzburg besides Kristensen but didn’t really play well after the winter break. It’s obvious that he will need some more time after his stroke to come back to his old level which he had at the start of the season.

In the first league game after the winter break against LASK Linz, he seemed to be not that confident and not really brave. During the build-up of Salzburg, he often positioned himself extremely deep and it seemed as he wouldn’t want to go higher as he was scared to give away space behind him for the counter-attacks of the opposition. Due to that, the right-wing was often quite vacant in the higher line and due to that RB Salzburg had one option less in attack. However, in the game against Altach for example, he played like he used to do before his stroke as he was permanently involved in the attacks of RB Salzburg and occupied the right-wing in the higher lines as we can see in the example below. 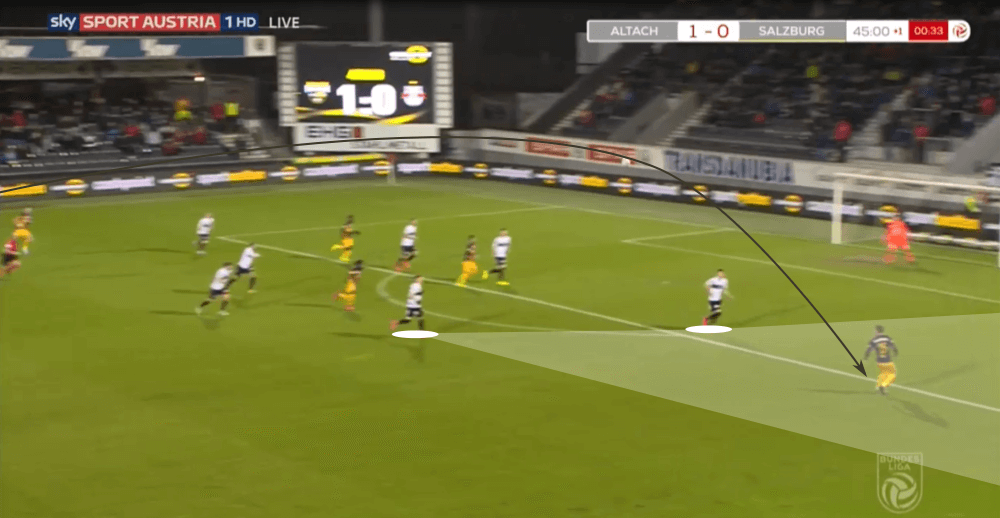 One of Farkas’ greatest weaknesses is clearly his defending. While he is also an athletic and physically strong player like his Danish teammate Kristensen, he is slightly weaker in his work against the ball. But, you have to add that his main problem are not the one-on-one situations but he is often too far away from his opponents when they receive the ball and that gives them too much space and time as he doesn’t really get into the defensive duel to get on the ball. 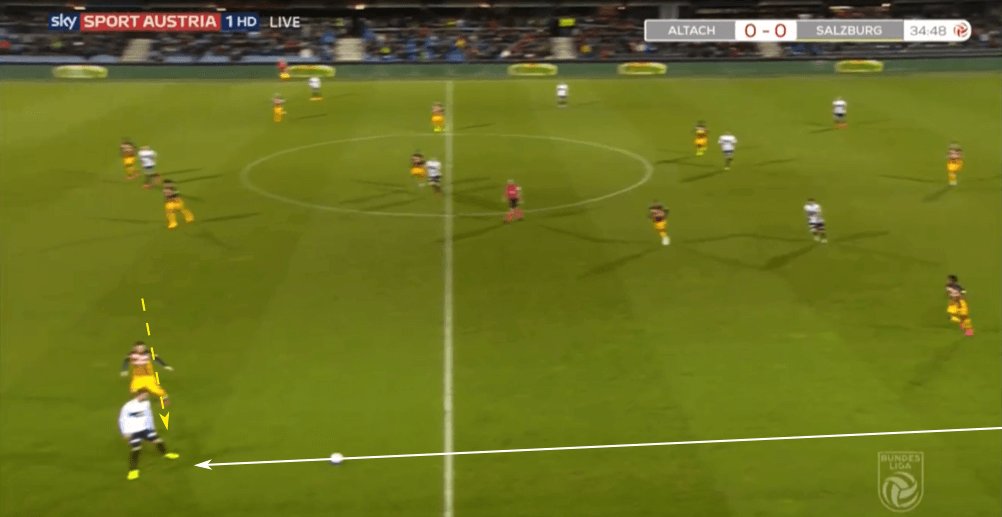 Vallci isn’t a right-back but a central defender but he had to play in this position to give Farkas some breaks as they had several games in a short window after the winter break.

The Austrian is the most defensive-minded of the three players, which is no real surprise as he is usually a centre-back. This can especially be seen during the periods of Salzburg’s possession. In these situations, he is often positioned quite deep when we compare him to Kristensen and Farkas.

Now, in combination with the narrow positioning of his teammates, this leads to situations in which Vallci is isolated on the right side, as we can see in the situation below in the game against Eintracht Frankfurt.

However, the Austrian is quite good in these moments and can dribble past defenders well. On average 66.7% of his dribbles in his games as right-back were successful, which is a better value than the ones of Kristensen (34.6%) and Farkas (45%). Vallci has such a good value as he mainly starts to dribble in situations when it seems to be really effective.

However, on the other side, the 24-year-old needs to work on his passing since that’s clearly not among his greatest strengths. In the games as a right-back, he had just a value of 68.6% for successful passes and that is the worst value of the three players in this tactical analysis.

As the last point of this scout report, I need to note that Vallci is the most reliable right-back of the three. Of course, he doesn’t support his teammates that often and isn’t active in the higher lines, but on the other hand, you have to consider that he brings in more defensive security.

To put it in a nutshell, many people don’t quite recognise how important Kristensen is for Marsch’s team. Many people only talked about the departures of Takumi Minamino to Liverpool and Erling Haaland to Borussia Dortmund as reasons for their bad form for after the winter break. However, people forget that they lost an important centre-back in Marin Pongračić and that Farkas and Vallci respectively can’t help Salzburg as well as Kristensen. Both men showed average performances and they can’t keep up with the active style of play of Kristensen.

For now, the Austrian Bundesliga is in a break due to the coronavirus, but it will be interesting to see how RB Salzburg will perform as soon as Kristensen is available again. Also, I can just note once more that Kristensen could become an incredibly great right-back if he works on his positioning and his technical abilities.