Austria Vienna‘s season after the opening 22 games has been horrible. They sit seventh after the first 22 matches in the Austrian Bundesliga, which means that they will be part of the relegation play-off since the 12 teams now get divided into two groups.

The Veilchen were the last club to win the Austrian Bundesliga in the season 2012/13, and since then every year RB Salzburg stood on the top after the last matchday. In the season 2013/14, they were even part of the UEFA Champions League but since then Austria Vienna haven’t been among the very best teams in Austria.

Even though it is a horrible season for them, there are also some positive signs as several young players were able to get some time on the pitch in this season and prove what great talents they are. Dominik Fitz is one of them and probably the breakout stars of this season. While last year, he only had 49 minutes on the pitch during the whole season, in the opening 22 matchdays of this campaign he played 68% of the possible time. In this tactical analysis in the form of a scout report, we’ll take a look at Fitz who joined Austria Vienna when he was seven years old.

In the first part of this tactical analysis, the topic to discuss will be his positioning and movements which are vital for a player like him. The 20-year-old can play in every single position in the midfield (central and on the wings), but his coach Christian Ilzer mostly lines him up as the number 10 in the 4-2-3-1. The Veilchen played in this season with several systems but this one was the most-used and Fitz usually was the offensive midfielder.

The Austrian has a lot of freedom during the periods when Vienna are in possession of the ball. Due to that, he can move freely and permanently search for spaces to position into to open up passing lanes. When we look at his heatmap below for his 18 appearances in the Austrian Bundesliga in this season, you can perfectly see that you can find the young midfielder almost everywhere on the pitch. It’s also visible that he prefers to position himself in the half-spaces instead of the middle of the pitch.

When Austria Vienna are in possession, Fitz is one of the most important players to progress the ball further up the pitch. He plays on average 36.23 passes per game and especially when he is one of the defensive midfielders, he is the one who organises the build-up.

One of Fitz’s attributes can be useful at the one moment, but bad at the other one: he wants to have the ball permanently at his feet. The Austrian loves to be on the ball and due to that, we can often see that he drops extremely deep to collect the ball from the centre-backs. But we don’t just watch this pattern when plays as a defensive midfielder, but also when he is the number 10.

In the example below against St. Pölten, the two centre-backs and the second defensive midfielder (James Jeggo) are already positioned deep during this sequence. Additionally, the second part of the double pivot, Fitz, positions deep to collect the ball and organise the build-up as he plays a long ball to the right-back. But, notice the gesture of the captain Michael Madl who doesn’t seem to understand why Fitz also dropped deeper even though there were already three men. 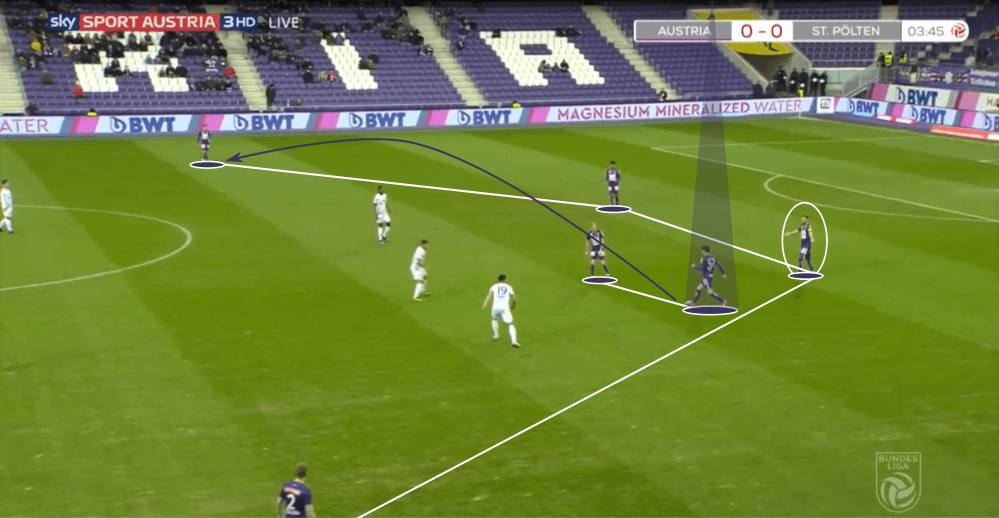 Of course, it’s great to see that such a young player like Fitz permanently searching for free spaces to receive the ball as he feels confident enough to help his side, but sometimes you have the feeling that it’s not necessary to be positioned in the according area, but rather to move somewhere else available for the next situation. We can see another example in the shot below as the ball is played wide to the right-back. The right defensive midfielder Jeggo is already in the central space to provide a passing option, but again Fitz (the second defensive midfielder) sprints into the same area to give his teammate an option for a short pass. 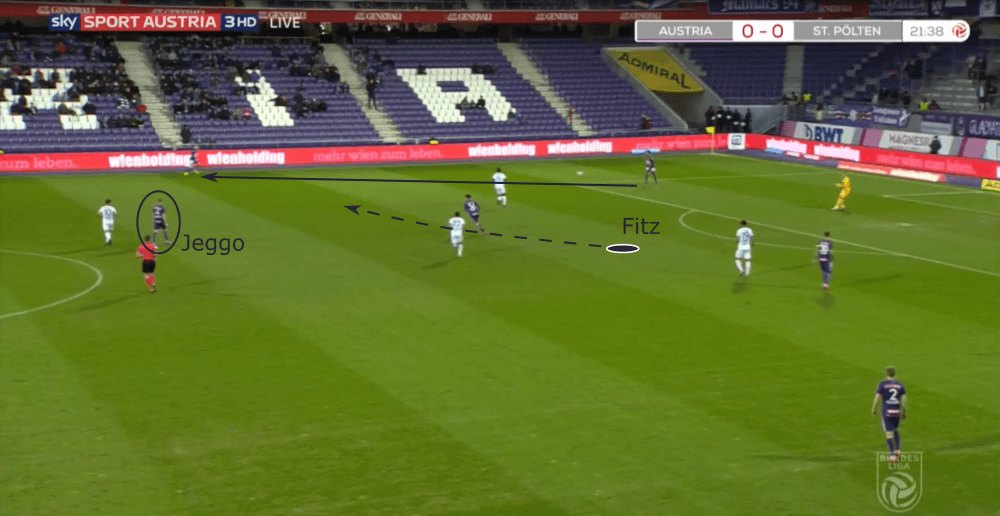 So we saw in the first section of this scout report that Fitz is vital for Austria Vienna’s tactics in possession, but sometimes you have the feeling that he wants to get on the ball that much that he positions in a useless space as a teammate is already there. However, we will now take a look at his passing and vision which are two abilities which are extremely important for a playmaker like him.

Firstly, we already saw in this tactical analysis, that the 20-year-old has good vision since otherwise he wouldn’t be able to position himself in the free spaces to constantly get on the ball. Fitz also tries to make the most out of his vision when he gets on the ball as he’s not a player who keeps the ball at his feet for too long which is usually quite typical for young players.

Instead, the Austrian midfielder is always scanning the pitch to detect movements of the opponents and his teammates and also does this before he receives the ball to pass the ball with his first touch if possible.

In the shot below we can see a perfect example as he receives the ball in the left wide-area and notices a free space on the according side. He plays with his first contact a good through ball towards Maximilian Sax who gets on the ball but delivers an awful cross which leads to nothing. 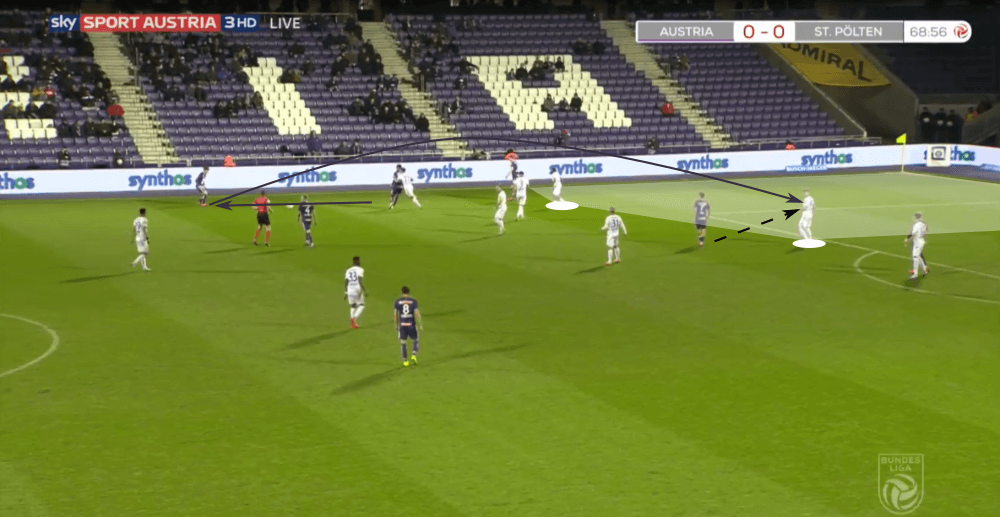 Also, when the 20-year-old finds himself in the central area of the pitch or one of the two half-spaces, he always looks for free spaces on the wing to play the ball out wide where his teammates then deliver crosses for Christoph Monschein who is their best goalscorer in this season. This is one of the common tactics of Austria Vienna in the final third and we can see that quite often.

In the shot below, we can see a typical situation as Fitz receives the ball and needs one contact to get himself in the right position to then pass the ball to the right wing from where then a cross gets played into the centre. 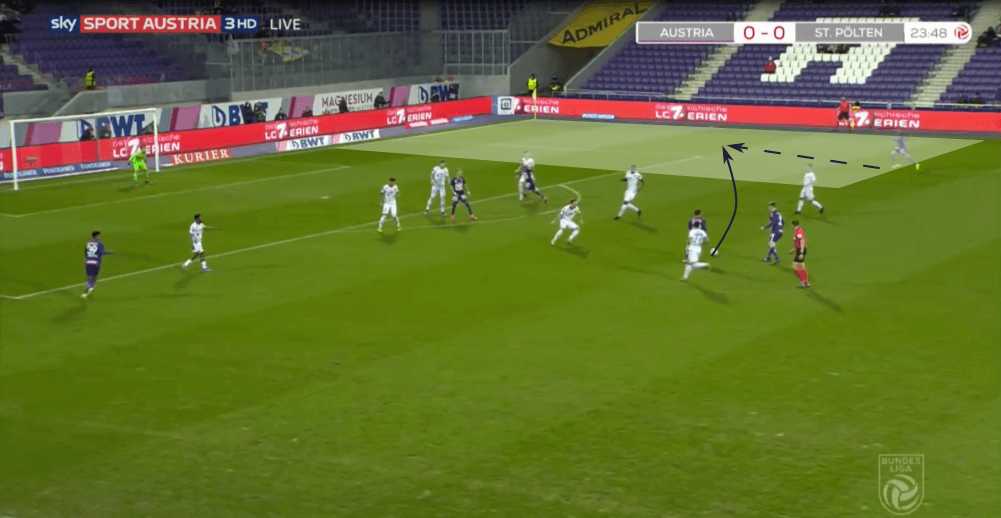 It’s also worth mentioning that the Austrian midfielder plays 6.93 long balls per game and they are clearly a part of his style of play as well as part of Vienna’s tactics. Sometimes, when Fitz drops deep as an offensive midfielder, the space in front of him is vacant (as usually their the number 10 should be positioned). Then, there is the long ball forward a logical option to progress the ball further up the pitch.

We can see in the shot below a perfect example for that. In this game against Sturm Graz, the defensive midfielder of Graz’s 3-1-4-2 permanently man-marked Fitz and took him out of the game. Especially in the second half, the young Austrian dropped deeper more frequently to get away from his marker. This then led to the situation below as he finds the right-winger Manprit Sarkaria with a great through pass who then scored the opening goal of the day. 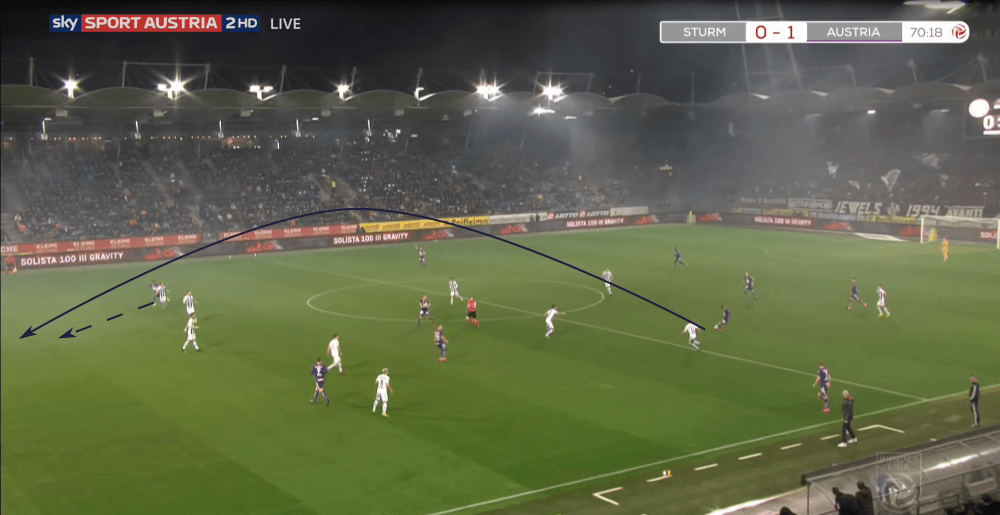 Basically, we can often see that young offensive midfielders or wingers love to stay on the ball and often miss the right moment to get rid of it. This is a common and typical problem of young offensive-minded players which they have to work on during the early stage of their careers. However, the 20-year-old Austrian is completely different when it comes to that topic.

Fitz is not really physically strong, has no outstanding acceleration, and his pace is also not his greatest strength. But the positive aspect about this is that he already learned at the age of 20 that he rarely needs these physical qualities when he can find another way to be successful.

Vision is clearly the first aspect which helps him massively to avoid one-on-one duels against opponents as he would have a clear physical disadvantage against the most defenders. Before he receives the ball, the Austrian scans the pitch to know where he would have to go with his first touch to not allow his opponent to get into the fight for the ball. The second aspect are his technical abilities as he is able to solve several situations with just one touch as we can see below.

Fitz often tries to get into free spaces with his first contact when he receives a pass to avoid that his opponents could even get into a duel with him. We can see two examples for that in the shots below. 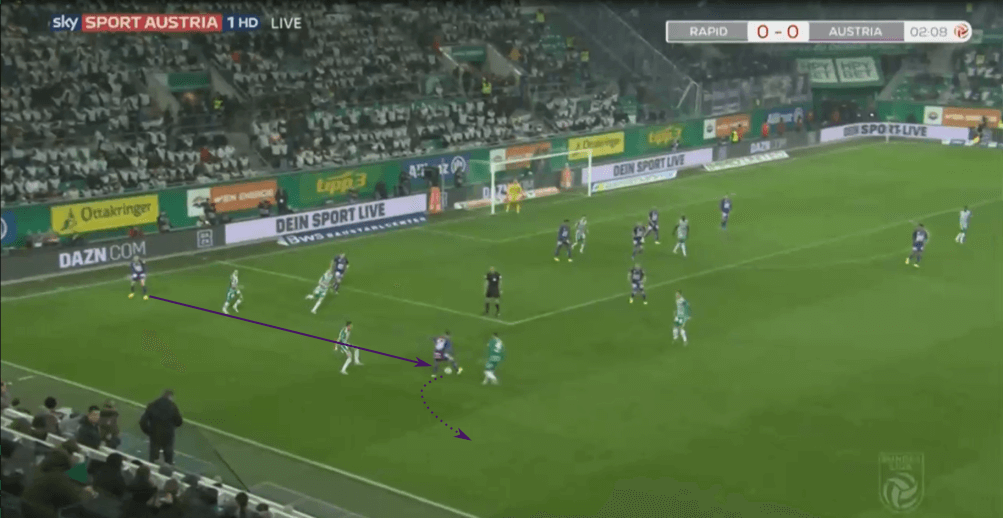 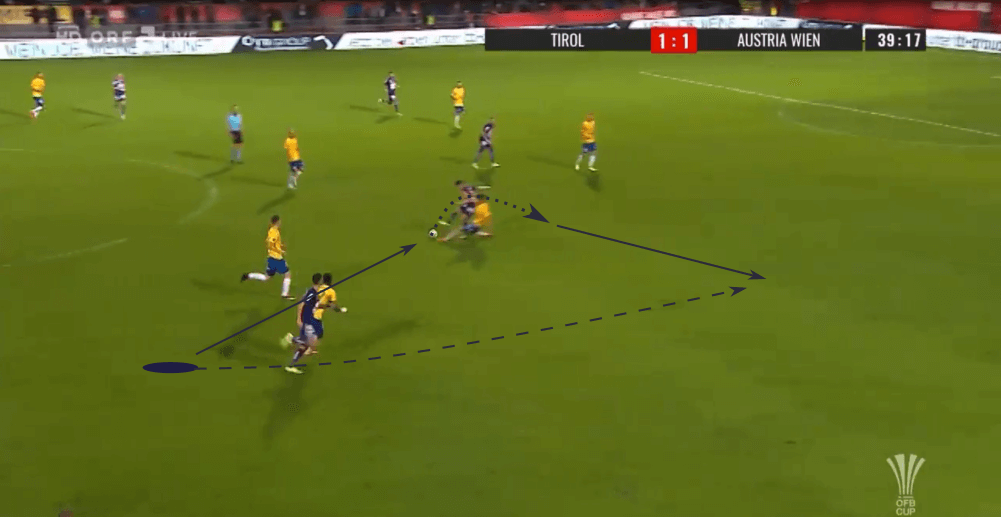 Fitz also always tries to use a maximum of three touches when he is positioned in the higher lines since there, he has not that much space and time. We can see that in the example below as he is positioned once more in a free space to open up the passing lane towards him. As he receives the ball, he needs just one touch to control the ball and turn to then play a through pass towards Monschein with his second touch. Again, he gives his opponents no chance to even get into the duel as he is so fast. 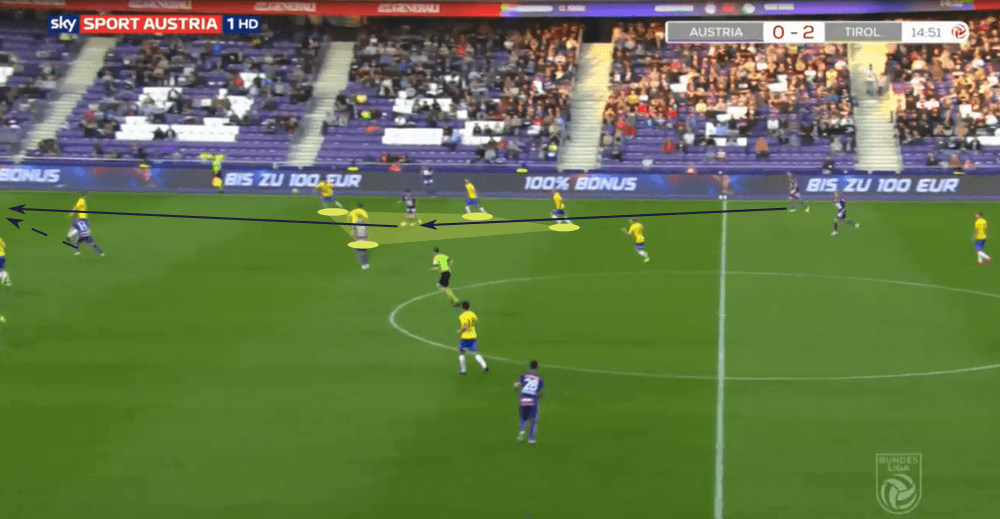 As the last point of this tactical analysis, we’ll have to talk shortly about his abilities to take set-pieces. Firstly, he is responsible for the corners and mostly delivers them quite well. The young Austrian provided in this season until now seven assists (best value for his team) in the Austrian Bundesliga but just one of them was after a corner. However, this goal was quite important as it saved them one point against RB Salzburg, and we can see it in the shot below as Fitz brings the ball into the centre where Erik Palmer-Brown scores with a header. 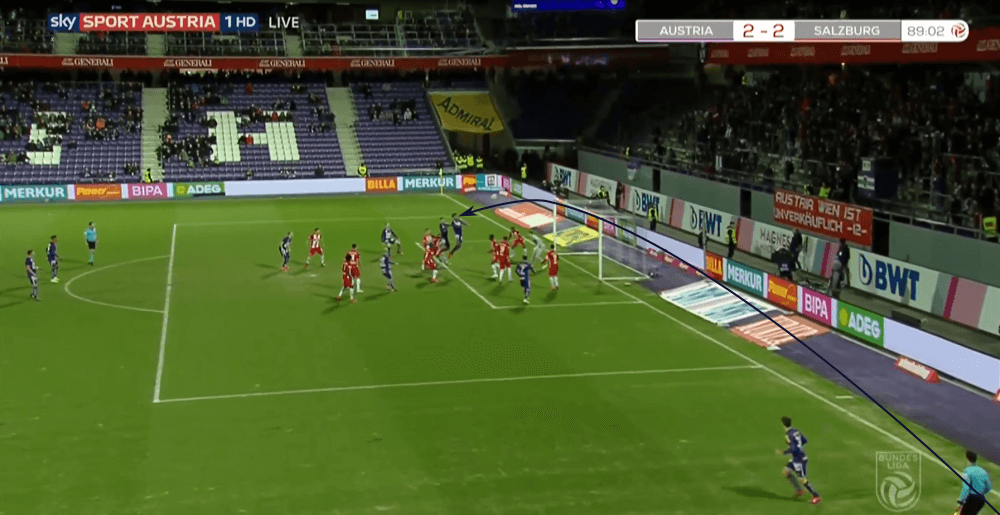 The young Austrian is also responsible for most of the free-kicks. Basically, when the ball is too far away from the goal to shoot, then he is the one who brings the ball in front of the goal with a cross, but also when the free-kick is located near the penalty box, he is often the one who takes care of it. In this season, he scored two goals and we can see one of them in the shot below as he scores with a beautiful free-kick.

Fitz is one of the greatest talents which currently play in the Austrian Bundesliga and his performance in this season is one of the very few positive aspects of the year of Austria Vienna. They collected in the first half of the season enough points to never have to be in the relegation battle in the remaining time, but still, this season shows that they need to work hard to get back among the best teams of Austria.

It will be interesting to see how Fitz performs in the remaining games of this season as the Veilchen now just play against the five other worst teams of the Austrian Bundesliga. His performances will determine how long Austria Vienna will be able to keep him or if he leaves them for a more successful club.