“I heard something about him, he was in the Barcelona academy, he was the captain in all the youth teams, he arrived here and he was immediately a captain…” – Guardiola

Under Pep Guardiola, Spanish talent Eric Garcia made his debut in the Premier League and the UEFA Champions League this season. Three years ago, Manchester City sealed García’s signature from Barcelona, and the young centre-back quickly gained popularity among from City fans through his reliable performances.

In this tactical analysis scout report, we will show you the strengths and weaknesses of García. This analysis focuses on the traits of the 19-year-old under Guardiola’s tactics.

Below is the heat map of García in all competitions this season. You can see he mainly played as the left centre-back, and the possession-based playing style of City allowed the 19-year-old pushed up to the central third.

As a ball-playing centre-back, his calmness and composure on the ball are just the basics. In Guardiola’s team, García has shown some impressive qualities, and one of them is his reading of the game. He is a very clever player who can anticipate situations and made his decisions earlier.

Below is an example from the Everton game that shows how García’s presence helped the team to keep the ball comfortably. In this scenario, Phil Foden was under pressure from behind and could only return the ball to Benjamin Mendy. Then, the left-back continued to move the ball back to García’s feet. The most impressive part of this image was the awareness of the 19-year-old. When Foden passed to Mendy, he already began to drop deeper. This allowed the centre-back to get rid of the marker nearby, who was Richarlison. García bought himself time and space to exercise his next move.

As the ball-playing centre-back, we know García can pass well. The Spaniard has decent statistics in terms of passing. He made 81 passes per 90 minutes, completing 95.7% of them. 8.42 passes of them were reaching the final third, and the success rate did not drop, which was 95.8%.

The question is, how good were his passes? In this example, we show you the capability of García to break the lines with good decision making.

García played at the Maksimir in the UEFA Champions League. In this scenario, Dinamo Zagreb formed multiple defensive layers to deny the build-up of City, mainly protecting the central areas. In such a case, García had two progressive options: Rodrigo Hernández and Mendy. The youngster from La Maisa chose the left-back instead of the pivot to pass to.

When comparing both options, passing to Mendy was better as this pass broke three layers of defensive lines. By contrast, passing to Rodri only bypassed the striker, Mislav Oršić, though it was much easier. With the progressive pass of García, City quickly entered the attacking third.

Given the instability of Nicolás Otamendi and recurring injuries of John Stones, García had his chance to play in the Christmas schedule. This example from the Sheffield United game demonstrates how García reads the game.

When Fernandinho passed the ball to García, the entire Sheffield defence moved simultaneously to the left flank, where City created a strong side. As a result, the strong side of City no longer possessed a numerical advantage. García is comfortable on the ball, therefore, he needed not to look at the ball when it was coming. Instead, he observed the movement of the opposition. When he realized the numerical superiority on the strong side was eliminated by the defence, he quickly moved the ball to his right side, opening a wide passing angle to another side of the pitch.

In this case, finding Fernandinho was fine, but passing to Kyle Walker was even better, as the ball is always quicker than the players. This pass switched the attacking to the weak side in an instant, helping City to progress to the final third.

García is not tall for a centre-back; he is 183 cm tall only. So, how does he perform in aerial duels? First, City tried to eliminate the physical disadvantage of García by placing Rodri in front of him. The sole pivot of City, or, his partner (Fernandinho) would be involved in the aerial duels more often.

García had two starts in the league and played 45 minutes against Wolves. He also played against Fulham in the FA Cup. In these games, he attempted 10 aerial duels but only won one of them. It means in three of these four, he failed to win any aerial duels. In this campaign, he had 3.16 aerial duels per 90 minutes with a success rate of 25.9%.

We use two examples from the Zagreb game to illustrate how he acted in aerial duels.

We think García himself also understood that his physical qualities would make it difficult to win the header. Therefore, when defending the long balls, he tried to make it difficult for his opponent to jump in the first place, rather than competing with him in the air for the ball.

In this image, you can see García used his right arm to bump Bruno Petković, which disturbed his jump and judgement on the ball. The Croatian then misheaded the ball and García recovered it.

However, when defending in the box, it is less likely for García to use the above strategy as it carries the risk of conceding a penalty. In other words, competing in aerial duels in these cases is inevitable.

In this example, you can see García had to defend the cross against Dani Olmo. This aerial duel is a direct competition of jumping, balance and physical strength. The 19-year-old was uncomfortable in this scenario and so Olmo won the header in the penalty box.

In terms of marking the opponent, García still has room for improvement. Since he was defending in an exposed defensive line, the Spaniard was used to position himself slightly deeper, protecting the zone instead of marking the targets tightly. On some occasions, this approach let his target receive the ball too easily.

In this scenario, García retreated quickly as he knew that he is not a very pacey defender. The 19-year-old did not want to compete for pace with the opposition. However, running behind the defence was not the intention of Shandon Baptiste; the Grenadian received the ball where he was in this image. Once Baptiste was on the ball, García could not prevent him from turning because of the physical disadvantage and the fact that he had already dropped deep, giving Baptiste the time and space to turn on the ball. 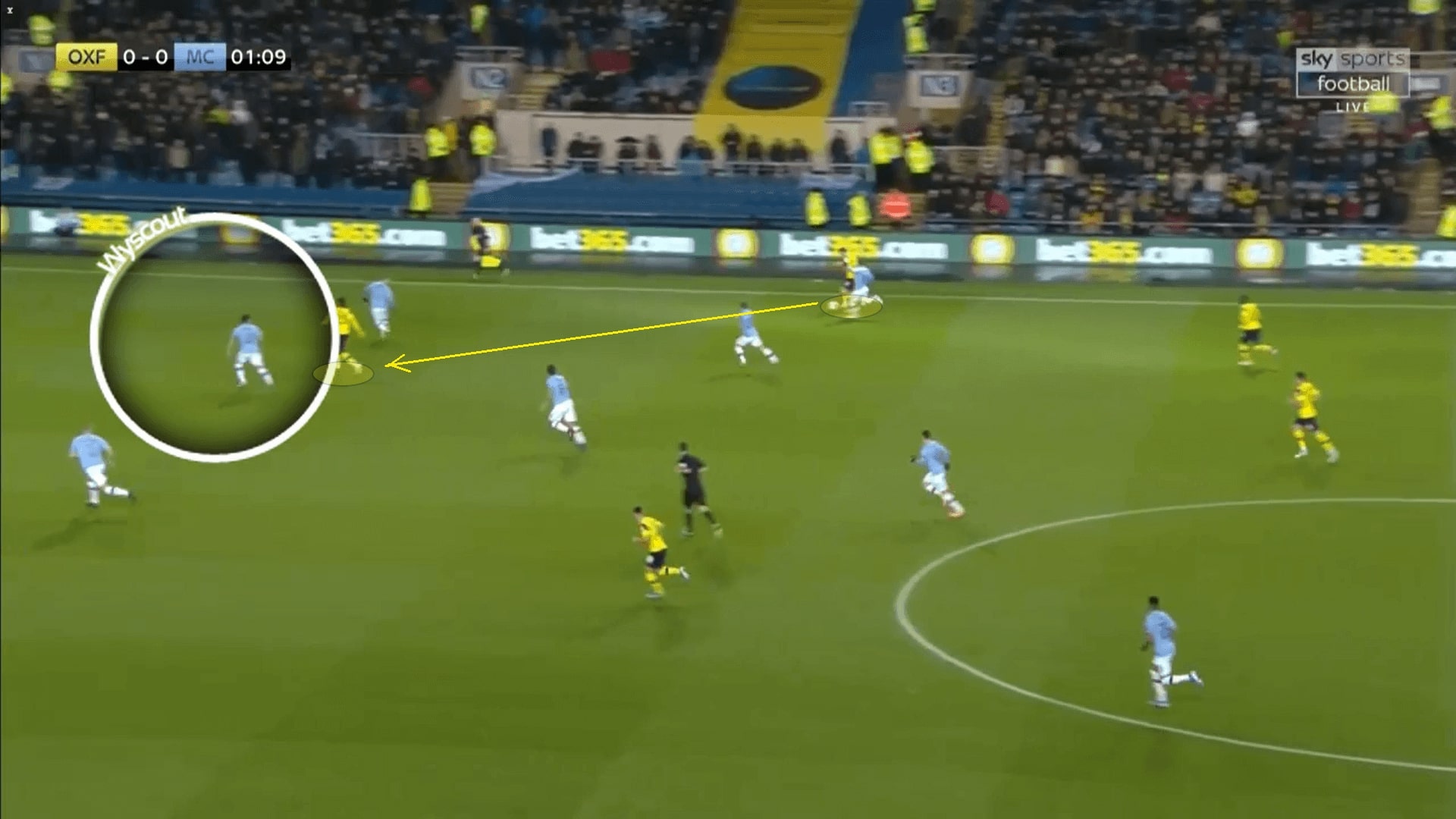 When City attack, they usually leave the centre-backs exposed. It means both centre-backs have to cover a large area and have to be capable of defending in 1 v 1 situations. In these cases, García still needed more experiences to cope with the attacking players.

This was a scenario from the Sheffield game. In this case, Chris Wilder’s team had a counter-attacking opportunity, and García was isolated against Lys Mousset. With the long ball going behind the backline, it fell to García to stop the play.

In this image, we highlighted the starting position of both players. García’s run is demonstrated by the blue arrow, while the run of Mousset is red. In such a case, the Frenchman beat García with his pace and faced Claudio Bravo with a 1 v 1. The run of García was a competition of pace and acceleration, which he lost.

In fact, there were other solutions apart from this one. For example, the white arrow which marked another run. With this curved run, García had a chance to defend from the centre without being outpaced. 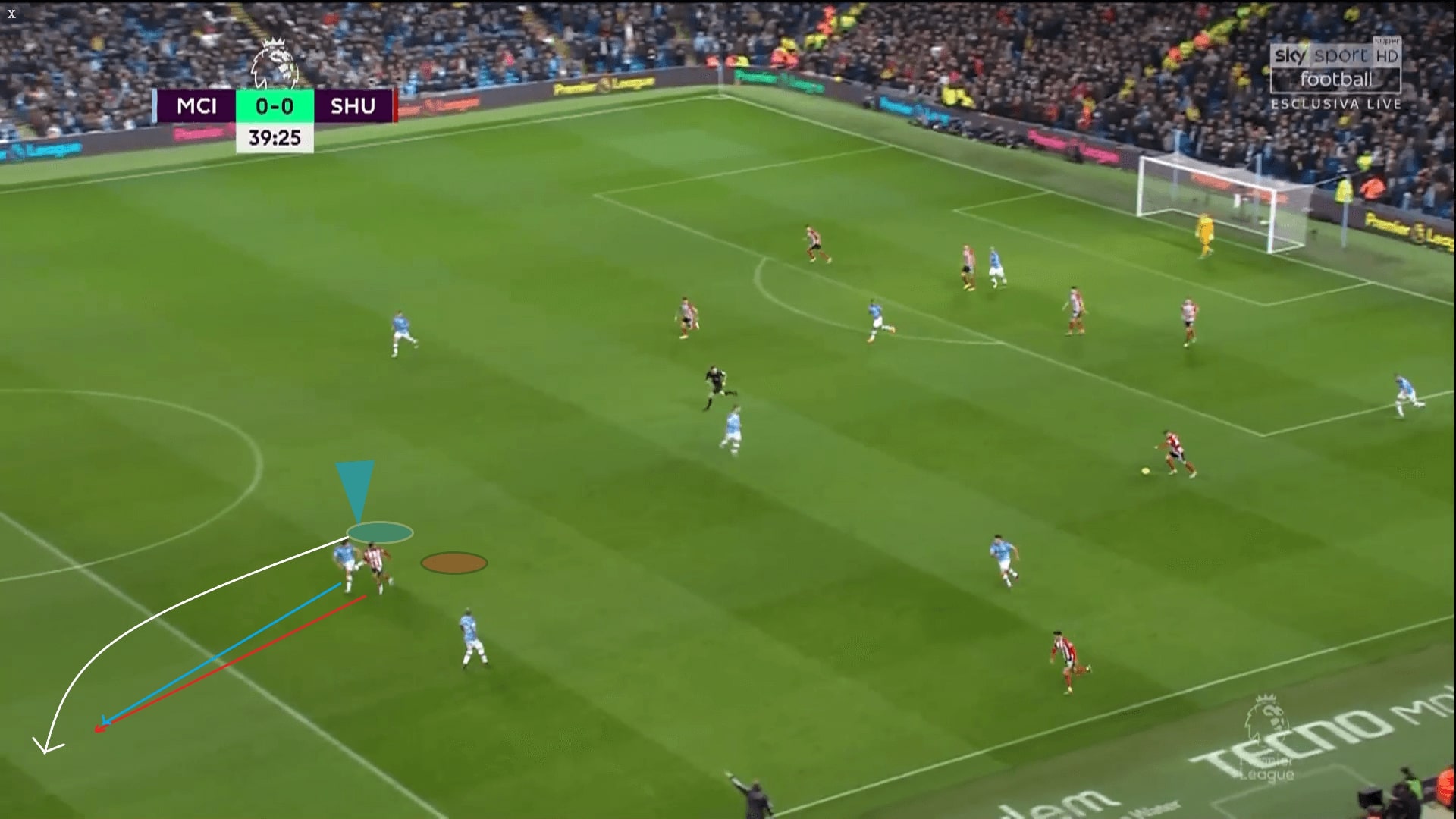 When defending the positional plays, sometimes García was casual to let an opponent run behind him. In this case, you could see the Spaniard positioned himself higher to deny the short penetration. However, he neglected Séamus Coleman, who was running behind him. The Irishman received the ball in the penalty box and was able to test Bravo with a shot on target.

In general, García has done okay in terms of defensive positioning. He also checked his surroundings constantly instead of merely focusing on the ball. Statistically, García has done a great job. He has 5.26 interceptions/90 minutes; 8.88 recoveries on average, and also, 5.73 defensive duels per game with a success rate of 63.3%.

In this case, García’s partner, Fernandinho stepped out, and he remained as the only centre-back to defend in the penalty box. Enda Stevens of Sheffield United managed to run behind the City defenders in the wide areas. In this case, García demonstrated his good defending.  First, he took a second to observe the positions of the attackers before Stevens got to the ball, when he identified that Callum Robinson was behind him. Therefore, he understood how to make his run. To prevent Robinson from receiving the ball, the 19-year-old had to get to the front post early and clear the cross.

However, on some occasions, García was too far away from his partner, leaving himself isolated. The opponents were able to capitalize through the gaps of the centre-backs. Zagreb created a goal in Croatia through such a scenario.

In this case, Zagreb were attacking the right flank, and García paid attention to the wide areas as well. Meanwhile, Otamendi was looking at another side, and so forgot to adjust his position to get near García. 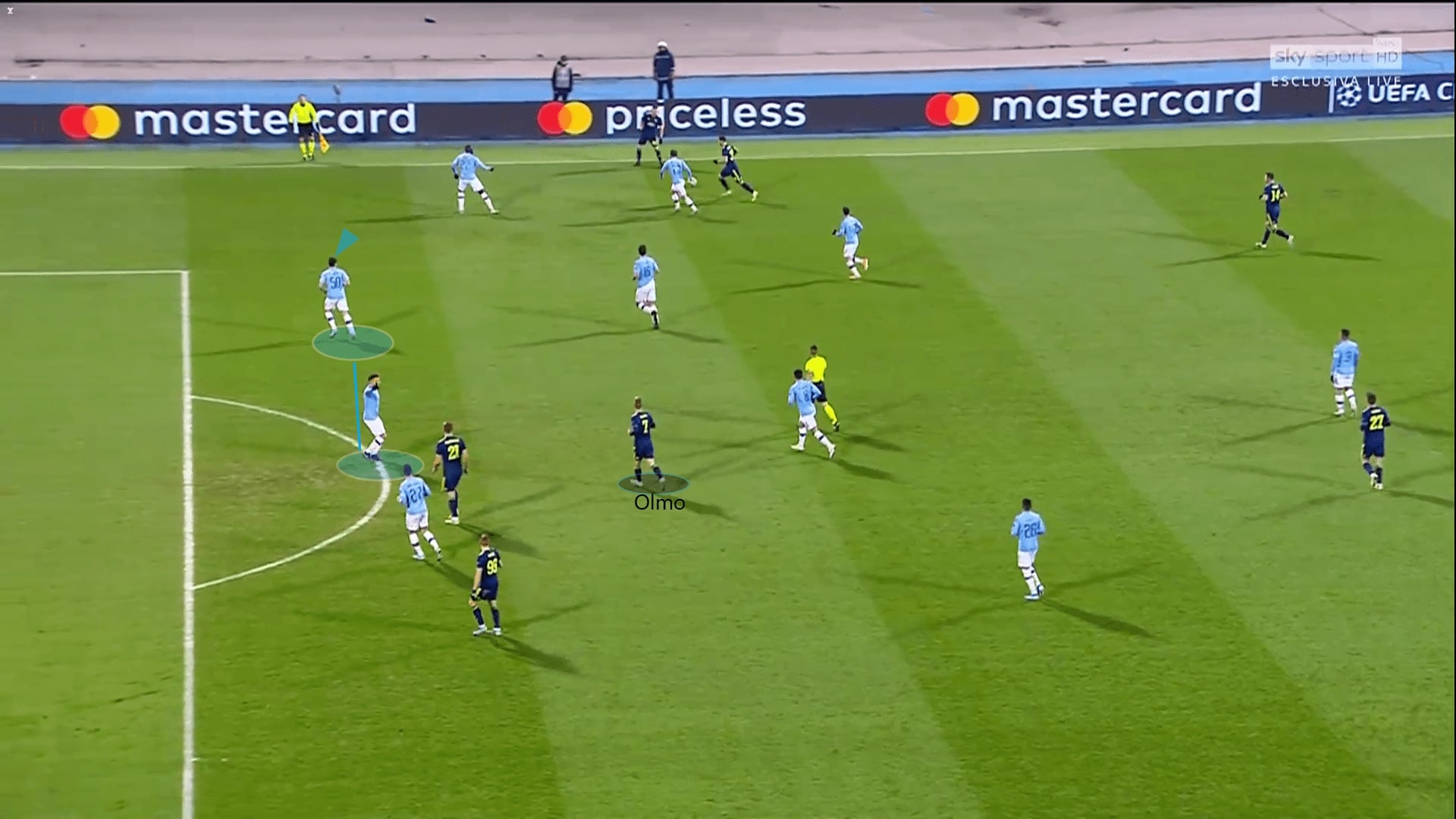 In this case, the gap between two centre-backs was identified and exploited by Olmo. Eventually, Zagreb scored a goal with an exceptional first-time finish from Olmo. 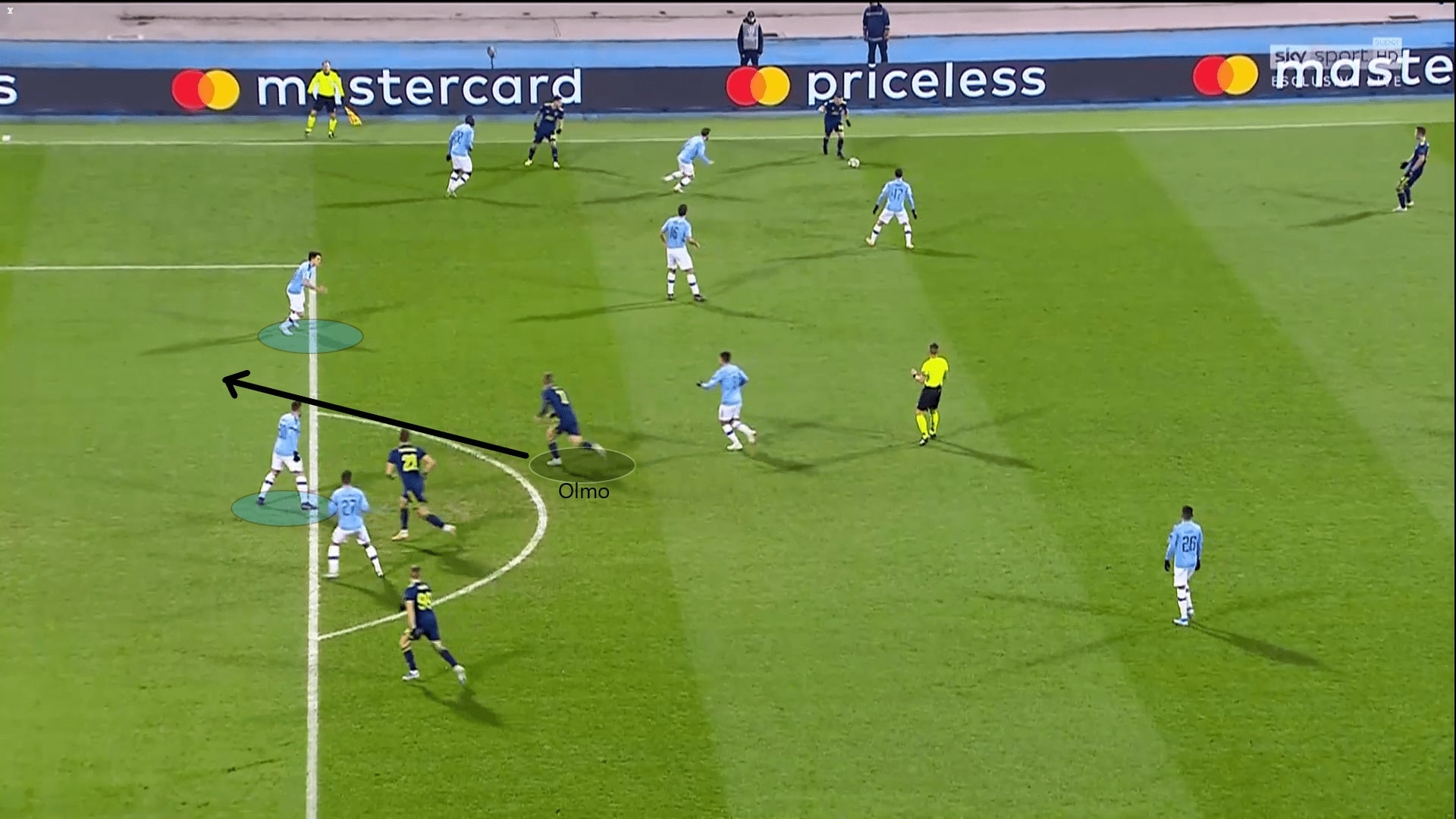 The Spaniard is one of the most promising centre-backs in the world. He is young, but the maturity of this player is much more than his age. The most important thing is that he has the desire to improve his performances, according to his manager. Also, García is equipped with tactical knowledge, despite his young age. With his cleverness, he will get more chances at City in the future.