Despite Manchester City still fighting for the UEFA Champions League, two new signings for the first team already arrived after the Premier League had ended. Our last week’s analysis featured Nathan Aké and how he could fit Pep Guardiola’s team and tactics. This week, the following tactical analysis is addressing what can Ferran Torres offer to them in the upcoming campaign.

Born in Foios, Torres already registered 97 appearances for Valencia although he was only 20 years old. In this season, he played 44 games in all competitions, bagged six goals and eight assists. City really got a bargain by snatching Torres at a fee of only €23m.

Torres is a right-winger and below is his heat map of the 2019/20 campaign. This shows the activities on the right flank, from Valencia’s half to the attacking half.

Looking purely at the statistics, Torres may not be the most attractive player in La Liga. We compared the 20-year-old with wingers in the same league, first in dribbles per 90 and dribbles success rate. Torres stayed in the top-right quadrant, suggesting the Spanish U21 international was above average.

Although there are some players who have higher dribble success rate than Torres’ 58.06%, the former Valencia winger still has a better record than some famous names such as Lionel Messi, Lucas Ocampos, Takefusa Kubo and Samuel Chukwueze. Torres dribbled 4.62 times per 90 minutes, and this figure was higher than the likes of Mikel Oyarzabal and Iker Muniain.

Among all metrics, Torres stood out in this particular one – key passes per 90. Only Messi has more key passes per 90 than the youngster, as Torres provided 0.74 key passes on average, higher than the big names such as Ocampos, Oyarzabal and Ángel Correa.

Torres also provided 3.42 crosses per 90 minutes. This is also above the mean, higher than Nabil Fekir, Correa, Chukwueze and Messi.

In terms of the threat related to goalscoring events, we used xG and xA per 90 as the metrics to measure Torres’ performance. He had 0.15 xG per 90 and 0.18 xA per 90 in the previous season – the former below mean, and the latter above-average. This suggests Torres might be more of a provider than a goal-scorer.

In terms of pace, dribbling skills and shooting, it seems City have better players in the squad. Offensively, some of his habits Torres are great and further analysis shows he has taken the details into account and this has ultimately helped his performance.

One of his strengths is regularly checking his shoulders when receiving a bouncing ball, as we can see below. Torres timed his move perfectly to perceive visual information from behind. Therefore, he knew what to do or how to adjust his body before making his next move. 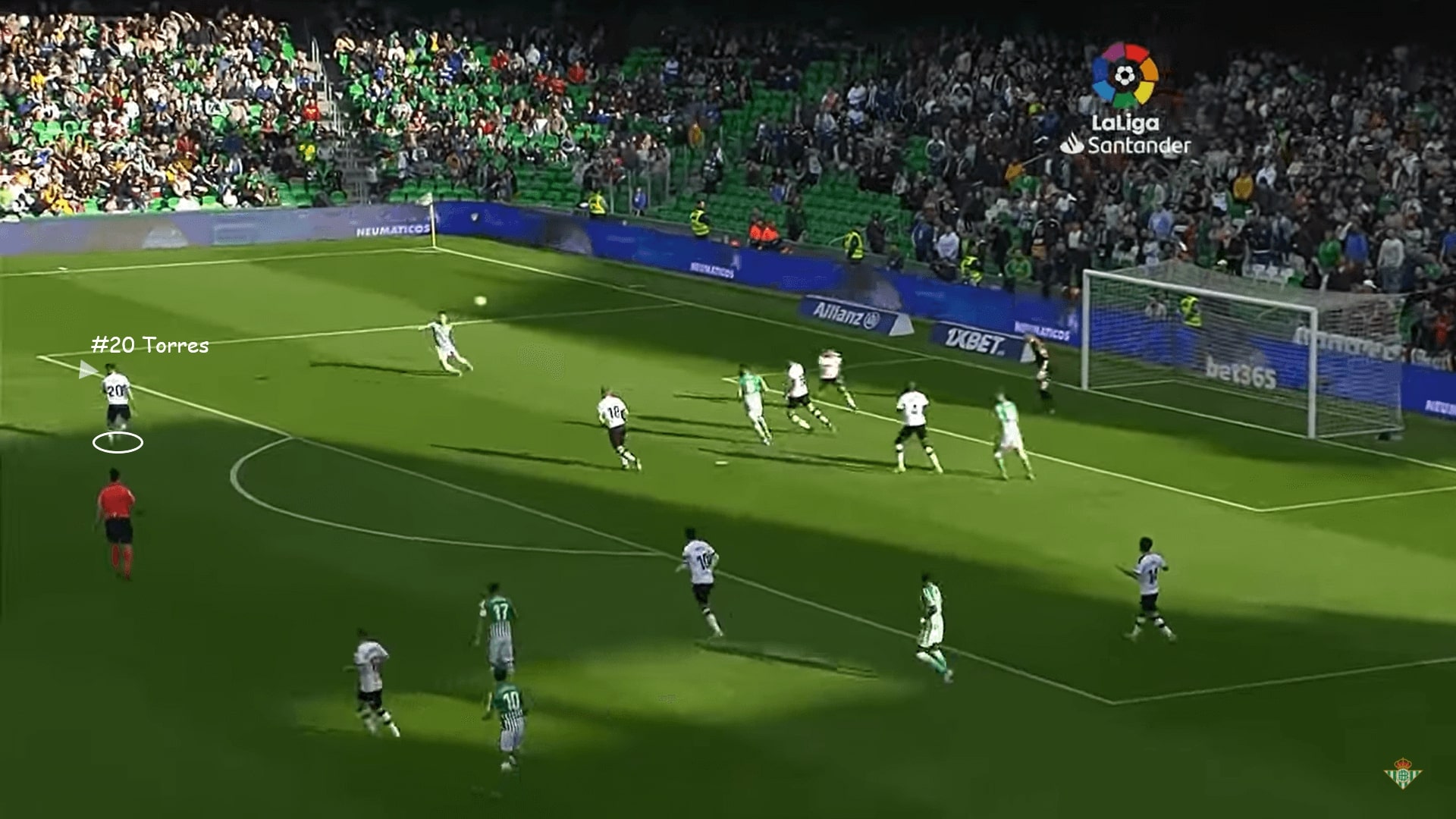 Another good habit is his preparation work before the ball arrives at his feet. When dropping deeper, Torres could half-turn his body and this is vitally important. If he closed his body, then, he wouldn’t know what’s happening behind and could not even turn or release a progressive option if an opponent was lurking around. With the half-turn, Torres could quickly make his move in a comfortable manner, including releasing the overlapping right-back in this image.

From what we have seen at Valencia, Torres could also operate in the half-spaces, leaving the wide zone for the right-back. This flexibility could help him settle at City, as Guardiola might also want his full-back and winger rotating or occupying both zones, respectively. If Torres is comfortable with being a right-footed player in the right half-spaces, the adaptation period might reduce even more. 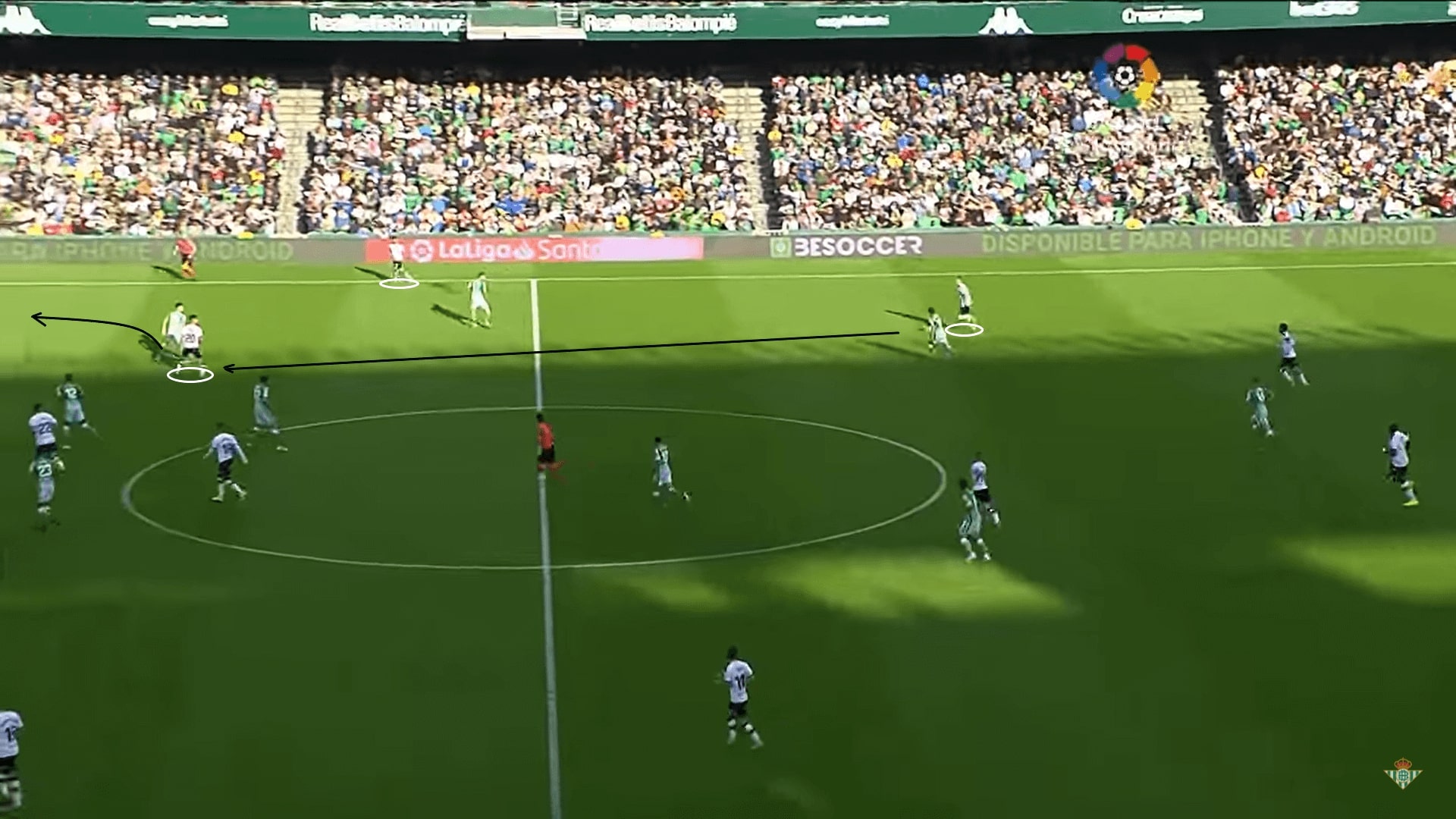 Torres likes to turn and his body softness allows him to do so. If the marker is guarding him tightly, the Spanish winger could still escape easily. For example, this was how he got past the Ajax player in the below scenario. However, sometimes Torres overuses this ability and this results in a ball loss. 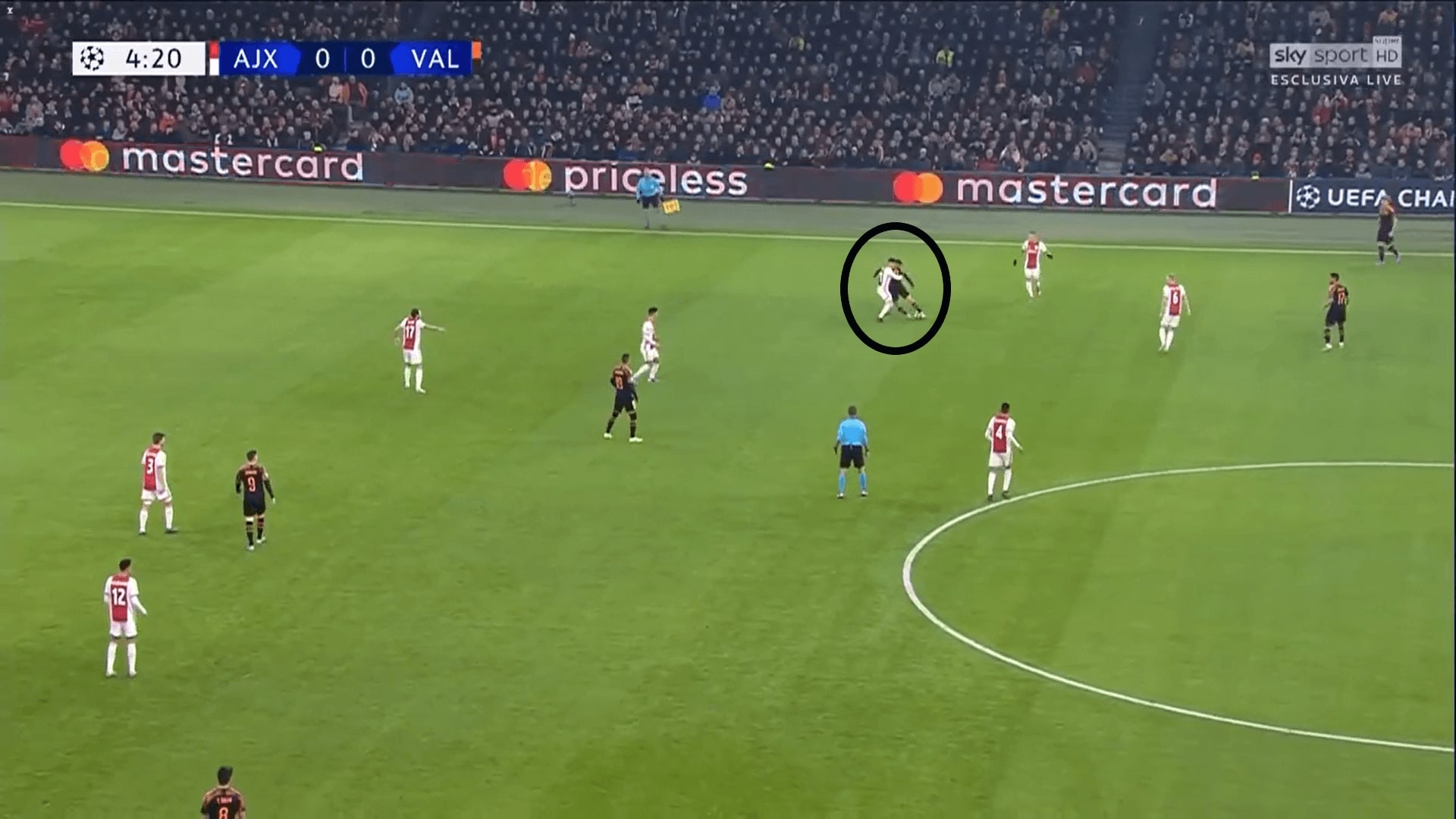 Apart from crossing, the most impressive trait of Torres must be the quality of his passing. Despite the situations on the pitch changing quickly, it seemed Torres could always recognise the central passing lane and play the ball back to a central option.

For example, the entire Betis defence was dropping and retreating. Given no Valencia player was yet to attack spaces behind the defence or the penalty box, it was meaningless to whip a cross. Torres understood there was an in-ball passing lane when the defenders continued retreating and seized the moment to pass to the teammate at the centre. This avoided the ball being trapped in the wide zone and the attack developed in a more dangerous area. 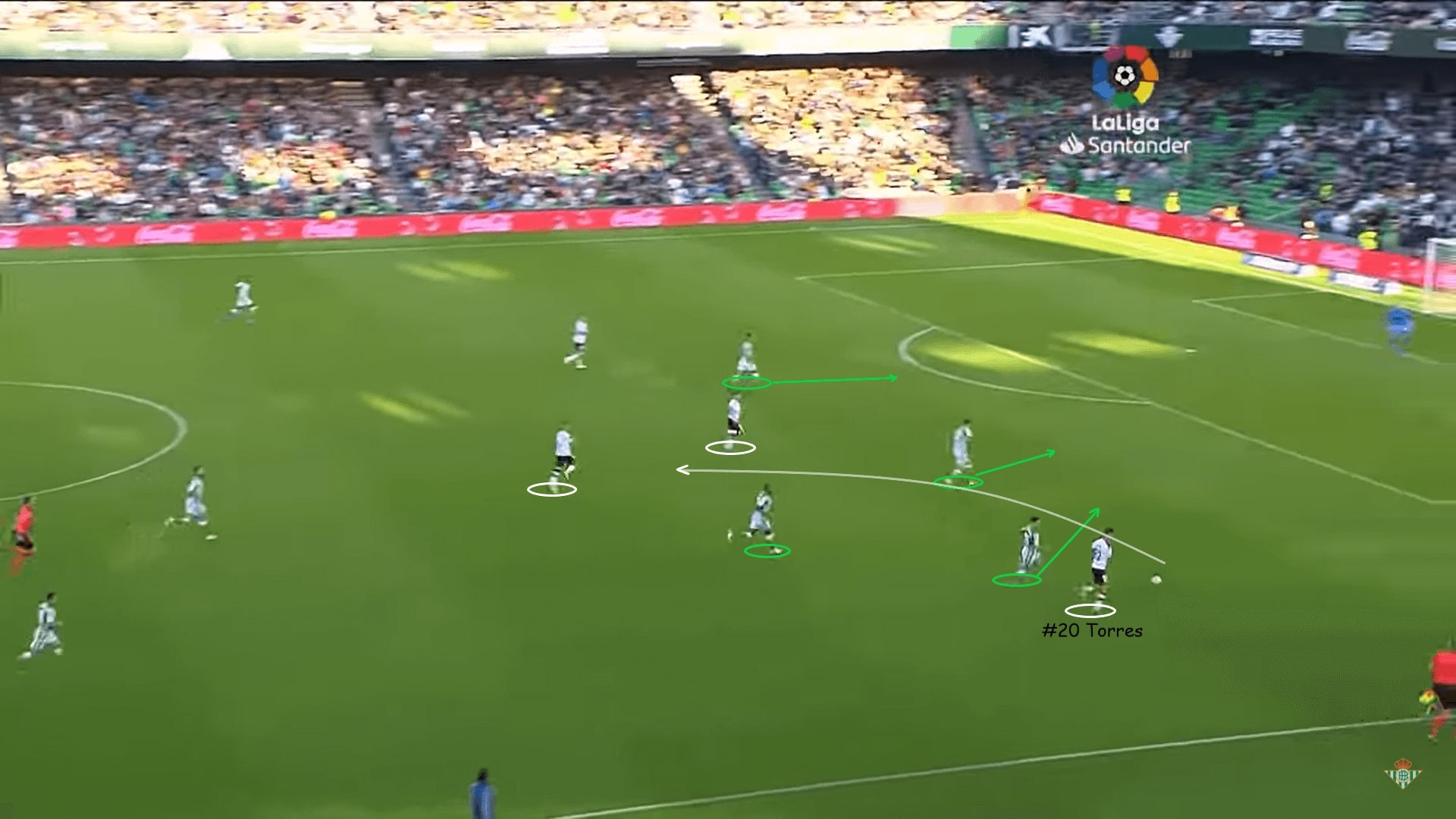 When dribbling or carrying the ball, Torres is natural and comfortable, not needing to look at the ball. This allows the Spanish winger to keep his head up and perceive visual information – the positioning of the opponents, his teammates and the passing lanes.

In this example, despite being surrounded by four Atalanta players, Torres was calm enough to identify the situation, play the ball to his left and creating a 2 v 2 situation. Average players might not be able to make this decision and they would likely find Kevin Gameiro (#9) vertically instead, which was an option that would be easily marked and overall suboptimal. 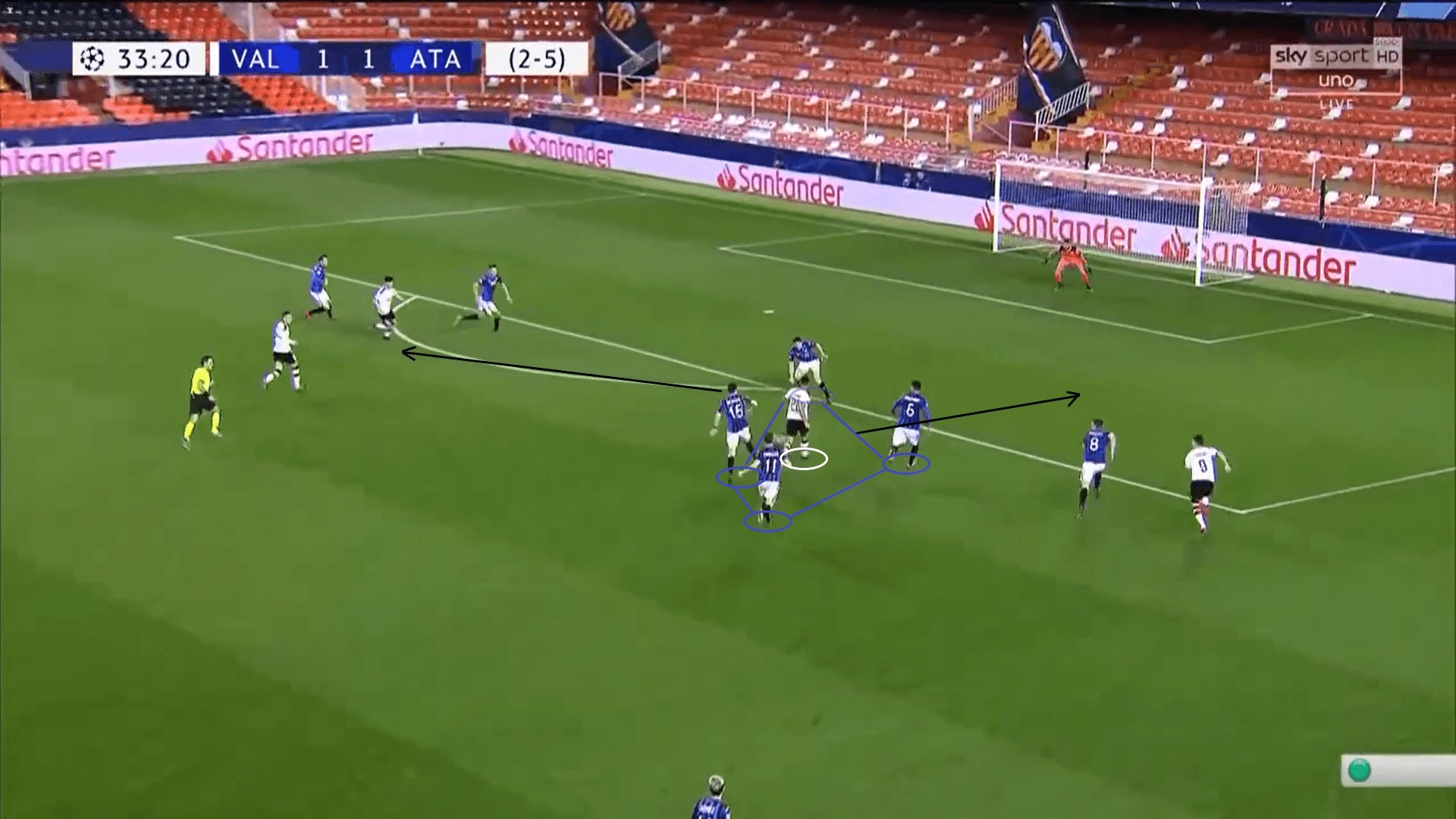 When the striker dropped and pulled the centre-backs out, Torres seized the moment to run into the huge horizontal gap. At City and under Pep’s tactics, Gabriel Jesus would also serve his teammates by dropping deep, and similar patterns should be available to hit an exposed defence. 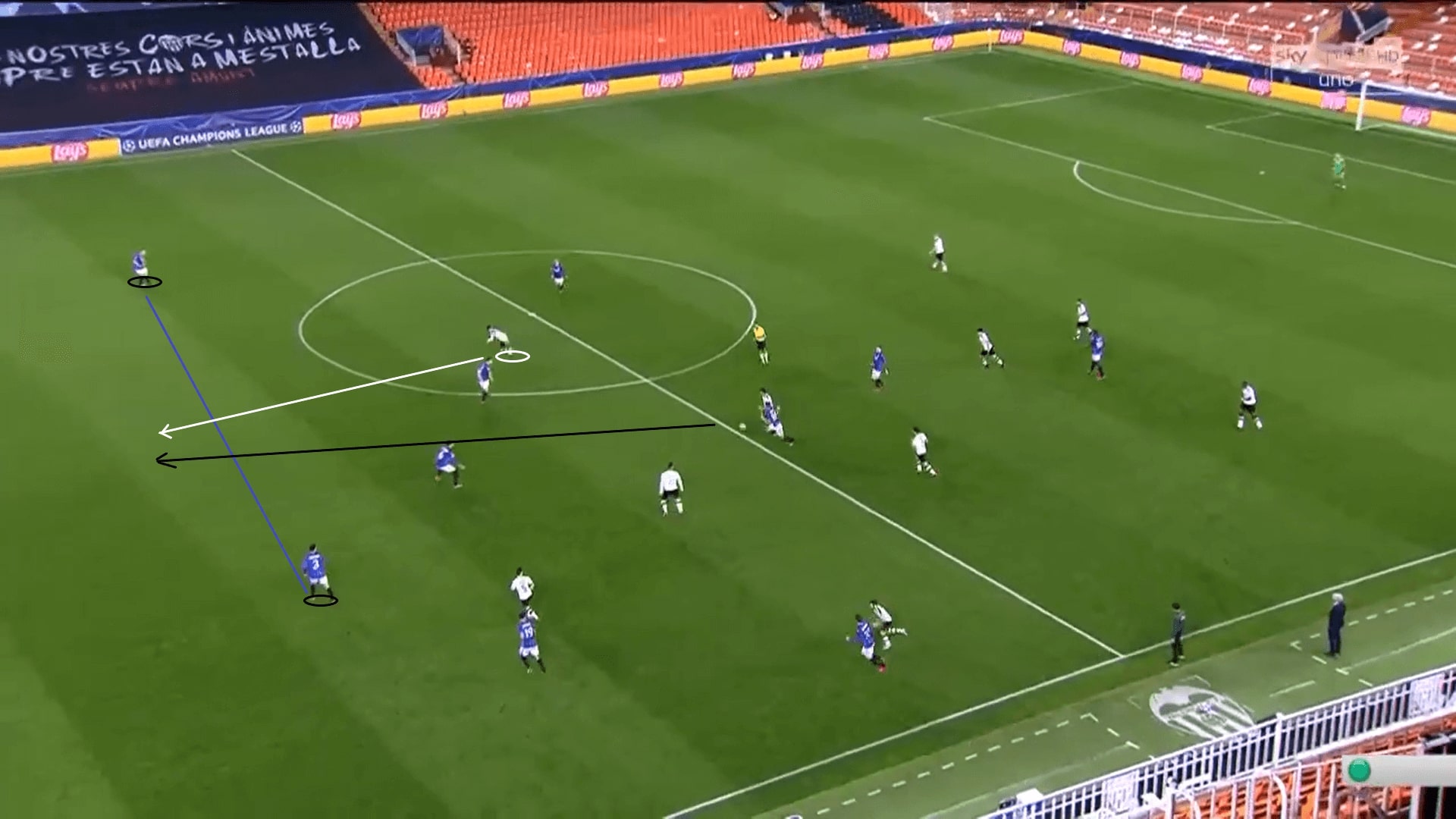 Another example in this analysis can be seen below against Lille as Torres scored the last goal by running behind the defence. This is a good example of the youngster exploiting the blindside of the opponent. 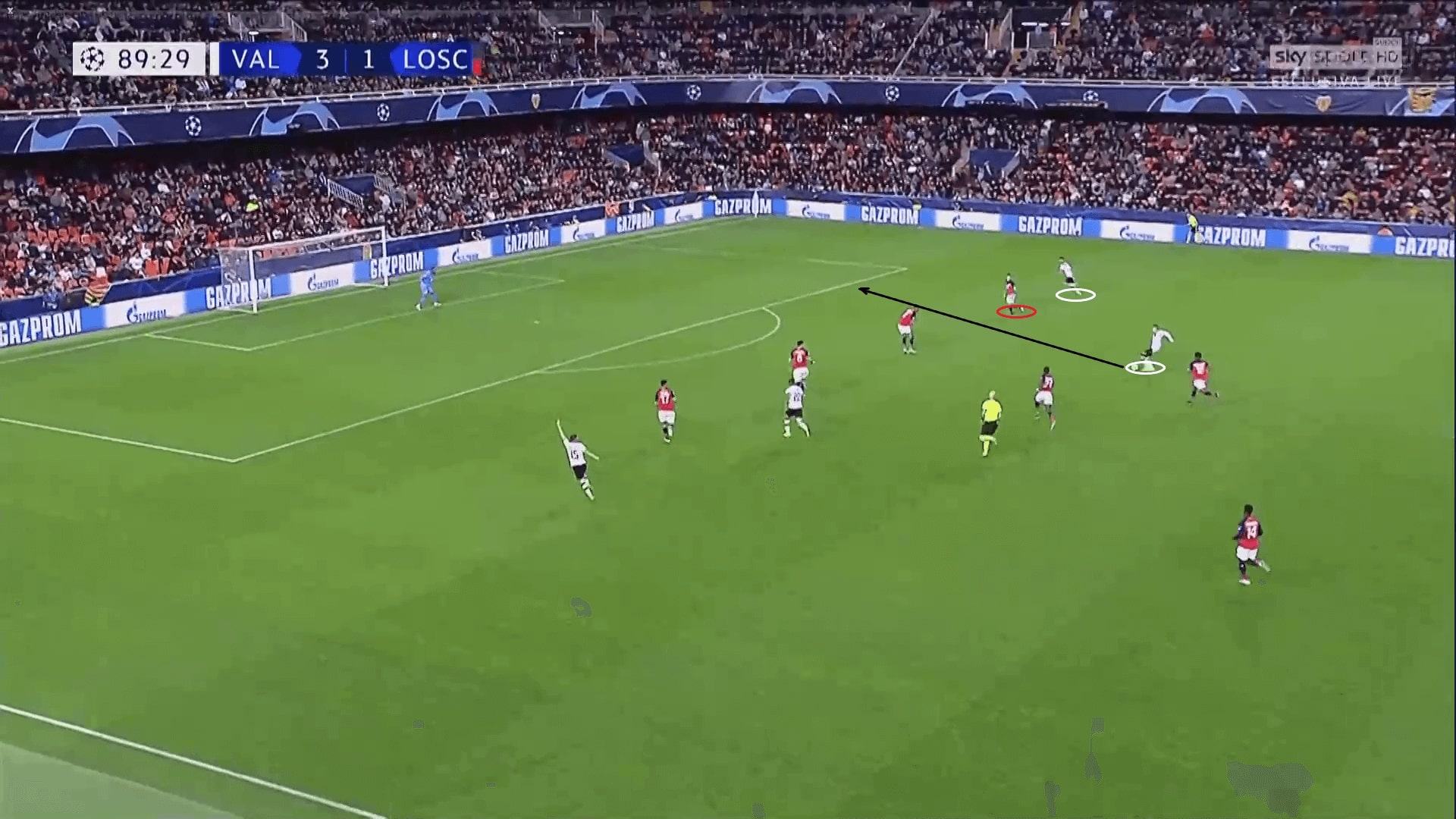 Although playing quite a number of games at the first-team level and in top-tier games, it seems Torres is yet to reach his full potential. There are some good qualities here, for example, his ability to play the in-balls. This might be useful when City are trying to break the block, or when the ball needs to be played into the centre to circulate and create the dynamics.

It is still too early to fix or create a development model for Torres. Raheem Sterling scored 30+ this season, and Riyad Mahrez was directly involved in 29 goals but they are wingers playing on their week sides. Given what Torres has shown, it seems the signing from Valencia is going to provide some assists to the team instead of finishing a lot and could play as a right-winger.

Despite all positional play concepts, Torres should also learn not to overcomplicate things. At Valencia, sometimes he was dispossessed because of unnecessary touches and turnings. This must not happen at City as Pep wants control and they need to avoid giving away possession cheaply. Torres also needs to put a lot more effort defensively with relentless running and tireless legs to press and counter-press for the team. He has to learn all of these traits.

But he will have to improve his physicality to fit into the new environment too. Playing in the Premier League requires a lot of physical duels, the intensity is high, and the players have to adapt. In the Super Copa clash against Real Madrid, Torres was pushed away by Isco and Toni Kroos in the duels so the physical aspects of this player still need to be upgraded. 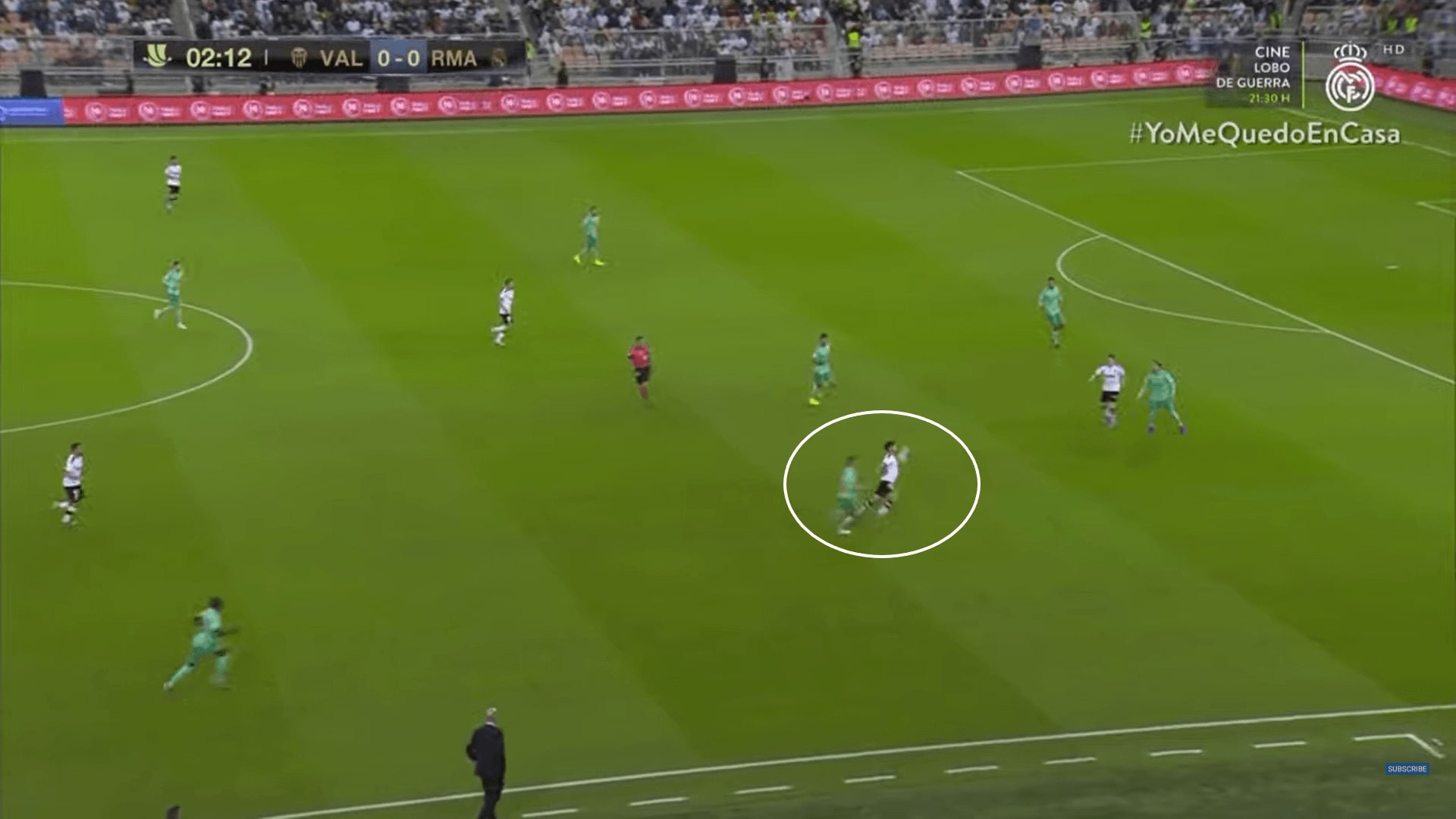 We do not think Torres can immediately be a regular starter at City as he is only a 20-year-old and there is always a lot to take on for a new player under Pep. Intriguingly, the Spanish winger was born only months earlier than Phil Foden, the gem of the Citizens. The duo could be very useful for the team, especially when they are trying to maintain the results in a tight schedule.

This scout report on Torres’ traits is only a prelude as we expect more players to arrive this window as even bigger names were linked with the Manchester club.