Having been on the verge of relegation to the National League in the 2013/14 season, Gareth Ainsworth has transformed Wycombe Wanderers, taking them from League Two to the Championship. Wycombe will be playing in the second tier of English football for the first time in their history this season. The COVID-19 pandemic meant that their place in the League One play-offs was decided by points per game, this allowed Wycombe to finish third in League One.

The fight for promotion was extremely competitive, seventh placed Peterborough finished three points behind second placed Rotherham having both played 35 matches. Promotion favourites Ipswich finished 11th and having been regulars in the Championship previously, Ipswich’s struggle in League One shows that the gap between the Championship and League One may not be so large which is encouraging for Wycombe. This tactical analysis will provide analysis on ‘The Chairboys’’ tactics to help answer the question whether they will be able to compete in the Championship this season.

The football played by Wycombe last season was effective in transitioning from defence to attack in a short space of time, long balls were directed towards forwards in central areas to generate goal scoring chances from loose balls. When in possession of the ball in the defensive third, Darius Charles and Anthony Stewart would look to play long passes to their forwards. 24% of Charles’ passes were long and 33% of Stewart’s passes were long last season. 28% of Wycombe’s passes per 90 were long, to put that into context the average percentage of passes that were long in the Championship and League One per 90 were 13% and 17% respectively.

Wycombe only lost possession of the ball 16.67 times in their own third per 90, their defenders rarely made short passes this reduced the likelihood of the opposition counter-attacking from misplaced passes close to their goal. This will work well against sides who like to apply high blocks, like Barnsley who like to control the game and will look to exploit any Wycombe mistakes when Wycombe have possession in their defensive third.

When defending, Ainsworth allows his centre-forward to occupy attacking areas to provide an attacking outlet for a direct counter-attack from a long pass/clearance. Adebayo Akinfenwa excels in aerial duels having won 7.77 per 90 and wingers David Wheeler and Fred Onyedinma provide support on the attack. Alternatively, Alex Samuel can look to make runs behind the opposition defence and this has allowed Wycombe a ‘Plan B’ as they can alter their centre-forwards depending on their game plan against the opposition.

Above, a Stewart clearance followed by a flick on allowed Samuel to score from a Wheeler pass, Samuel occupied an attacking area which allowed him to take this opportunity. If he dropped back to help defend when Wycombe lost possession he may have been two yards too deep to run onto the pass.

Wycombe usually attack in a 4-3-3/4-3-3 variation, Akinfenwa and Wheeler’s aerial ability is utilised from dead ball positions. Wheeler has played on the right-hand side in the past and has won 5.83 aerial duels per 90, 34% of Wycombe’s attacks have come from the right-hand side compared to 29% from the left and this is partly due to Wycombe exploiting Wheeler winning his aerial duels to transition quickly from defence to attack.

70% of Wycombe’s shots have come from central positions, the attacks may begin out wide but Wycombe like to create short passing combinations in the final third to take a shot near the centre of the goal. This could prove effective in the Championship Wycombe look to only shoot from clear cut chances. Wycombe only lost four points from winning positions last season, if they can score the first goal their defensive resolve can aide them in not losing matches.

Doing it the Wycombe way 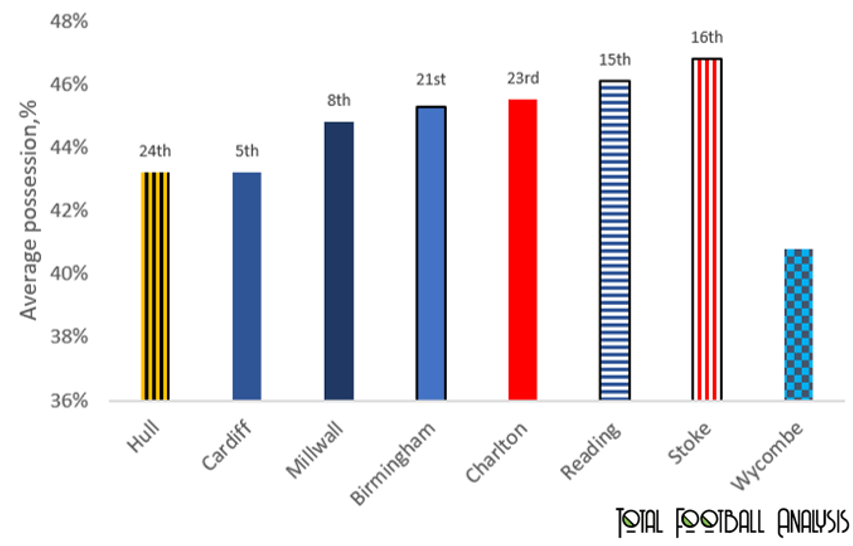 Cardiff and Hull played with the average lowest possession in the Championship last season at 43.20%. Cardiff and Millwall excelled this season and both appear to play a similar style of football to Wycombe where they look to frustrate the opposition in their defensive shape before making direct passes in the opposition half when in possession.

Luton and Huddersfield fared poorly against Cardiff and Millwall last season, both becoming frustrated by sides who hold a defensive shape as they struggle to break them down. When their opponent’s defensive players support the attack, Wycombe’s quick defence to attack transitions could exploit their opponents’ lack of numbers in defence.

The penalty of low possession

Wycombe thrived off loose balls last season having won 20.45 loose duels per 90 last season and some of their goals had been scored from loose ball situations. The limitation to the low possession style is that the direct route could be ineffective against sides that are strong in the air such as Cardiff and Millwall, sides that play similar to them. They will need to take advantage of the loose balls from second balls and knock downs to cause a threat to either side.

Alternatively, the press forces longer passes and this is to Wycombe’s advantage because they don’t play a high block therefore are able to defend against long balls facing away from their own goal rather than chasing long balls that are played behind the defence.

Against Oxford United in the play-off final Wycombe’s man-mark press was highly effective in unsettling Oxford’s passing style and forced them to play long passes. The press is shown above. The press would work best against sides who like to play shorter passing and could allow Wycombe to win the ball in areas close to the opposition goal when mistaken passes were made. Their press could work well against Nottingham Forest and Bristol City who made 19.96 and 19.74 losses in their final third per 90, both sides’ short passing style can force them into making passing mistakes.

When pressing in the opposition half the Wycombe centre-forward and one of the central midfielders will look to apply a block to intercept any forward passes made by the opposition when they have possession in their own third. Below compares sides who could allow a similar PPDA as Wycombe this season. The average PPDA in the Championship was 9.37 per 90 and the average PPDA in League One was 8.16, this was taken into account by multiplying 8.10 by the ratio between the two leagues’ PPDA. 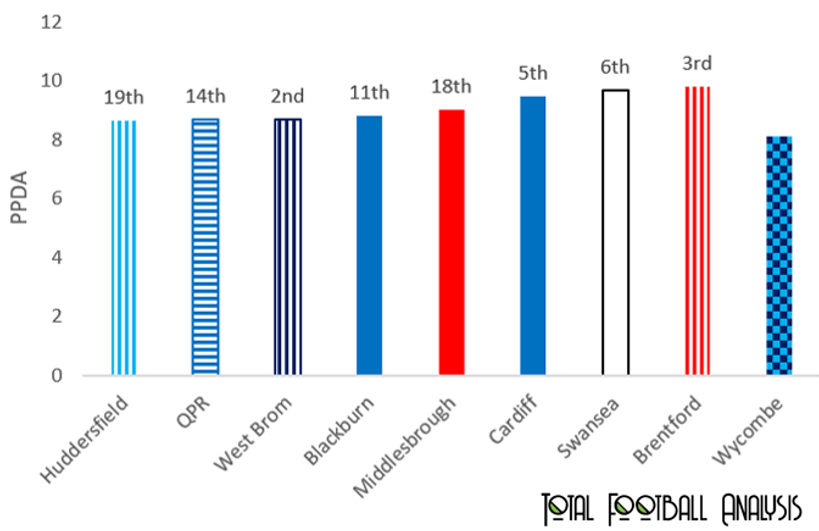 The press applied by Ainsworth’s men is passive. The block applied is relatively low and below displays the average position map for Wycombe’s three play-off games, the average distance is evidence that Wycombe play with narrow/standard width. Their compactness depends on the opposition as they apply a man-mark press. The visual shows that the block applied by Wycombe isn’t extremely low however it is lower than a high block as they look to frustrate the opposition by man-marking passing options rather than intensely pressing in the opposition’s defensive third. 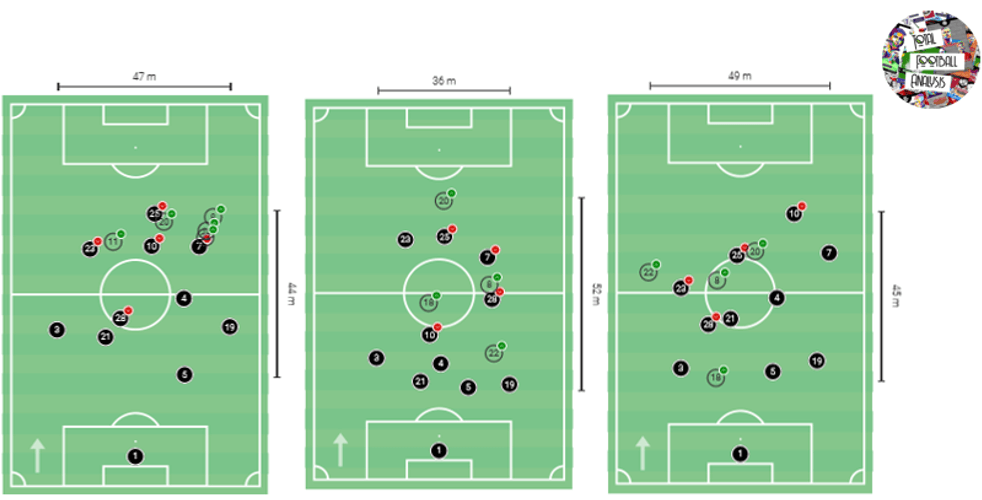 When defending, Wycombe usually transformed into a 4-1-4-1 formation. Wycombe blocked any attempts made to attack the 18-yard box when they defended in their defensive third. They forced 41% of their opposition’s shots to be outside the 18-yard box last season. Below in the following defensive transition against Oxford, the back four defended narrow and the wingers defended in wide areas. This is an example of the defensive shape applied by Wycombe in their defensive third. These tactics are likely to frustrate sides Bristol City and Swansea as they only scored three and five long shot goals respectively.

The holding midfielder/pivot in the Wycombe midfield played by Dominic Gape and previous loanee Nnamdi Ofoborh contested any loose balls in the Wycombe half in front of the defence. Ofoborh featured frequently in this role and was effective in intercepting opposition passing lanes having made 7.25 interceptions per 90, the tenth most in the division last season. His defensive workrate could be missed this season if he is unable to return from Bournemouth, who have just been relegated from the Premier League after facing sides such as Manchester City.

The man-mark press could cause problems for Wycombe as it is likely to create space for the opposition to exploit if the Wycombe players are slow to react. Below is an example of this where Wycombe right-back Jack Grimmer was forced out of position by the player he was marking, Marcus Browne. Oxford look to play a pass into this area of space, David Wheeler is able to track the run of Josh Ruffels who looked to attack this space. If Wheeler was slow to react then Ruffels could have caused a threat.

Wycombe’s defensive shape in the final third is likely to frustrate sides however it can limit the support to the centre-forward on a counter-attack. Swansea and Birmingham conceded 11 and 10 goals from counter-attack respectively and counter attacks should be utilised against them. It will be interesting to see how Ainsworth sets his side up against both sides knowing their weakness from counter-attacks.

One of Wycombe’s main attacking threats could come from set pieces having scored 15 goals from set pieces last season, the second most in League One, this was 28% of their overall goals in League One last season. They will highly rely on the delivery of Joe Jacobson who has scored four free-kicks this season while assisting three goals from set piece situations. Wycombe like to attack corners by crowding towards the far half of the six-yard box to allow for loose ball wins or goals directly from attacking the corner, below shows the visual before Anthony Stewart scored from a corner. 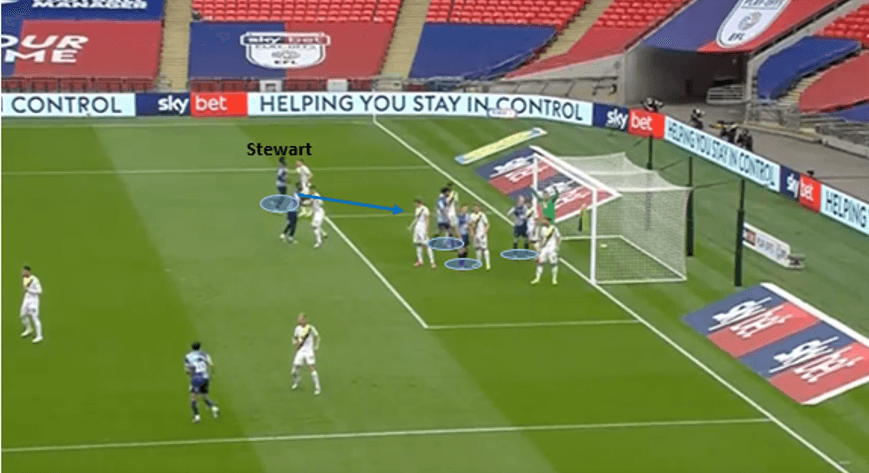 This tactical analysis has provided an insight into how Wycombe could play and fare this season. Wycombe will need to be efficient in front of goal because they rarely dominate possession and will look to emulate Cardiff and Millwall in effectively playing direct. The scout report also displayed that Wycombe can be a real threat from dead ball situations and it is likely that if they can score the first goal in many of their games then they stand a good chance of accumulating points.

Wycombe are likely to have one of the most restricted budgets in Championship and Gareth Ainsworth will need to be creative in signing players that could improve his squad. The core of the team has been kept together at the time of writing and Ainsworth will be looking to sign players who fit his hard-working ethos and provide competition for places with the defensive department likely to be strengthened with little cover for the first choice back four.

Within this analysis it is considered that with respect to League One, the Championship is more difficult to compete in as it is one step up from League One. Less Championship sides like to play longer passes than in League One and therefore Wycombe could take advantage of the Championship defences that aren’t so experienced when defending against their style of play. It is difficult to determine how Wycombe will fare next season however their spirited defensive resolve and direct attack will find them finish above the relegation zone in a predicted 18th position.