RB Salzburg is famous for producing huge talents in their youth academy to then sell them for big money like Xaver Schlager or Hannes Wolf who both play in the Bundesliga now. Also, bringing in young talents for little money to ultimately sell them for outstanding transfer fees. The most famous examples for that are Erling Haaland (Borussia Dortmund), Sadio Mané and Naby Keita (both Liverpool).

In the summer transfer window of the season 2020/21, they were able to lose only one key player as Hee-chan Hwang moved to RB Leipzig while they were able to bring in two tremendous talents. Samson Tijani (18 years old) joined them from a Nigerian club and will be out on loan this season at Hartberg to collect his first experiences in the Austrian Bundesliga. While the 20-year-old Oumar Solet got bought from Olympique Lyon for €4.5 million.

In this tactical analysis in the form of a scout report, we will look at his style of play, strengths, weaknesses and how he will fit into the tactics of RB Salzburg.

In the first section of this tactical analysis, we will focus on the typical positioning and movements of Solet to get a better understanding of his basic style of play. The young Frenchman played during the 2019/20 season in nine games for Olympique Lyon B in the fourth tier. Interestingly, he played as a defensive midfielder and as centre-back.

Below, we can see his heatmap for these nine games. It stands out that as a central defender he seems to mainly play on the right side of the central defence since he is right-footed while in the slightly advanced areas as a defensive midfielder he was more active on the left side. 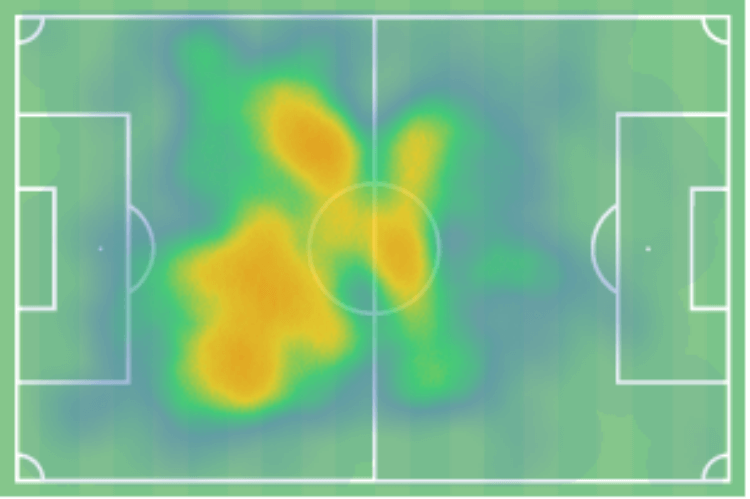 As we will see in the following part of this scout report, Solet is very confident with the ball at his feet even when playing as a defender or defensive midfielder. During his games, he actively demands the ball and tries to provide his teammates with good passing options.

Whenever he plays as a defensive midfielder, we can regularly watch him coming deep to collect the ball as we can see in the example below. The back four split wide and Solet came deep to give the centre-backs the chance to position even wider to get on the ball. 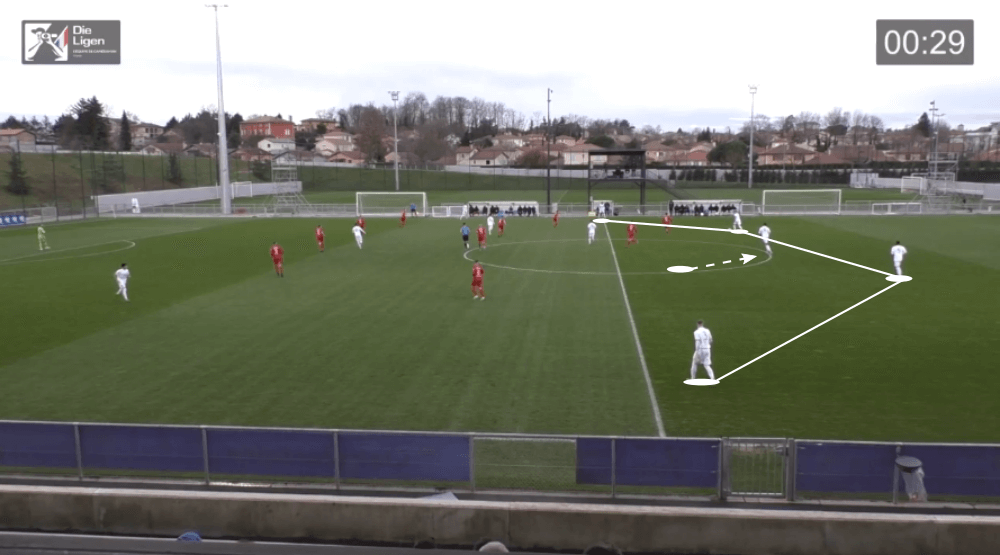 At this point of the analysis, I would like to mention that in the first two friendly matches RB Salzburg played when this article had been written, Solet on both occasions got subbed on to play in central defence. Once as left centre-back and once as a right centre-back. Besides, Jesse Marsch has several options in the central midfield, meaning Solet will likely play as a central defender at Salzburg.

Next, we will talk about the technical ability of the French defender, since this is an important quality for the modern defender. As I already mentioned earlier, the 20-year-old is very confident on the ball and additionally is right-footed. He mainly uses his dominant foot to play passes, and therefore his body orientation is most of the time prepared for passing. This can be seen in the example below in his first appearance for RB Salzburg in the friendly against Ajax Amsterdam. 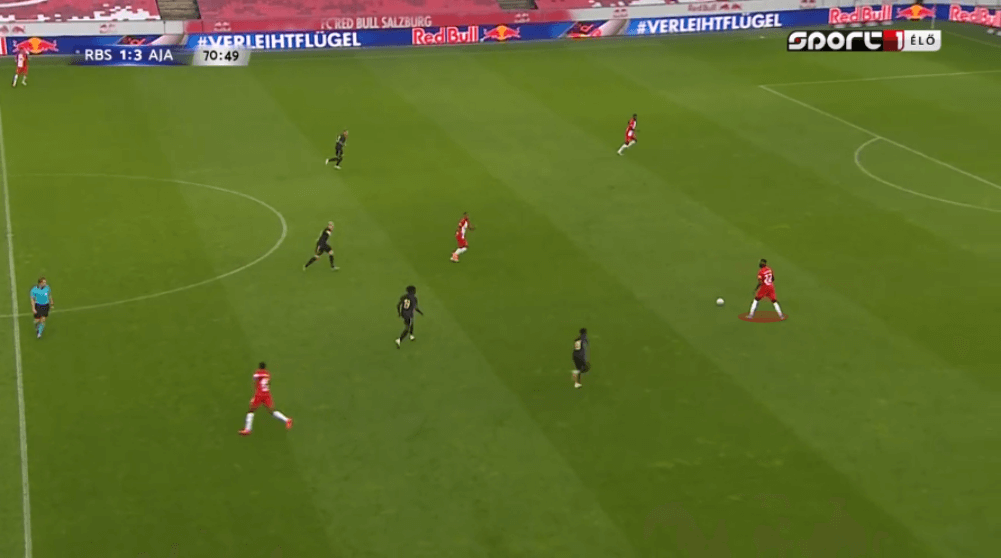 Logically, this makes it hard for him to play as a left central defender since then he always needs to turn to the inside as we can see above. This limits him in his ball-playing actions. However, on the other side, he is extremely confident under pressure and is a player who is always looking for the option for short passes or dribbles.

Even when the opponent rushes towards him as we can see in the example below, he stays calm, detects free space (in this case the area behind the Ajax player who puts pressure on him) and tries to exploit it with a run or pass. Also, the aspect that he pulls off such a dribble in his first appearance for RB Salzburg shows how confident he is. 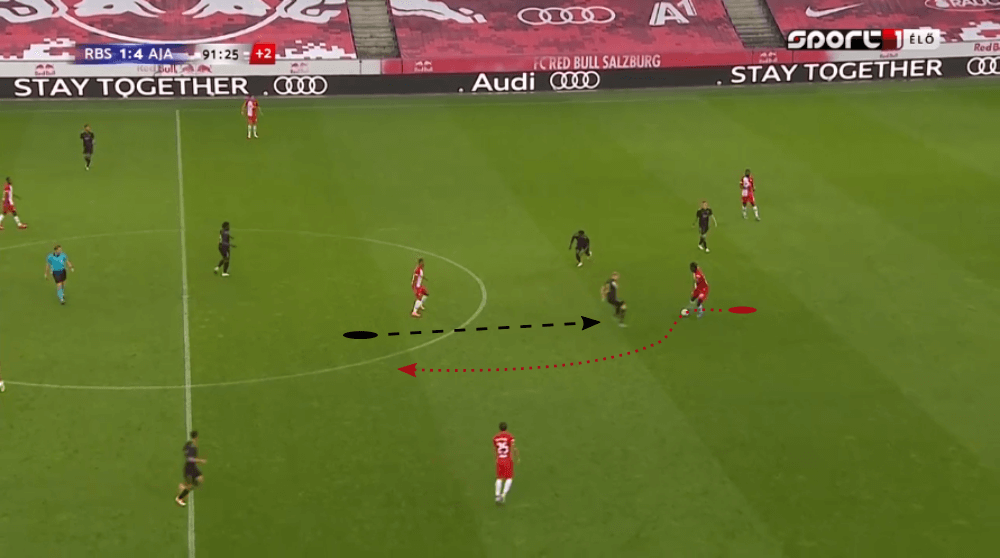 Solet generally likes to dribble and show his acceleration and pace to drive forward. Furthermore, he can use his physical strength in case an opponent tries to win the ball from him.

These physical abilities, paired with his ball control, enable him to dribble with the ball. The Frenchman completes on average 54.17% of his 5.66 attempted dribbles per 90 minutes. These numbers show us that he has the confidence to start several dribbles per game and additionally has the qualities also to complete them. We can see below an example as he goes forward with the ball at his feet to enter the space between the strikers and four midfielders in the opposition’s 4-4-2. 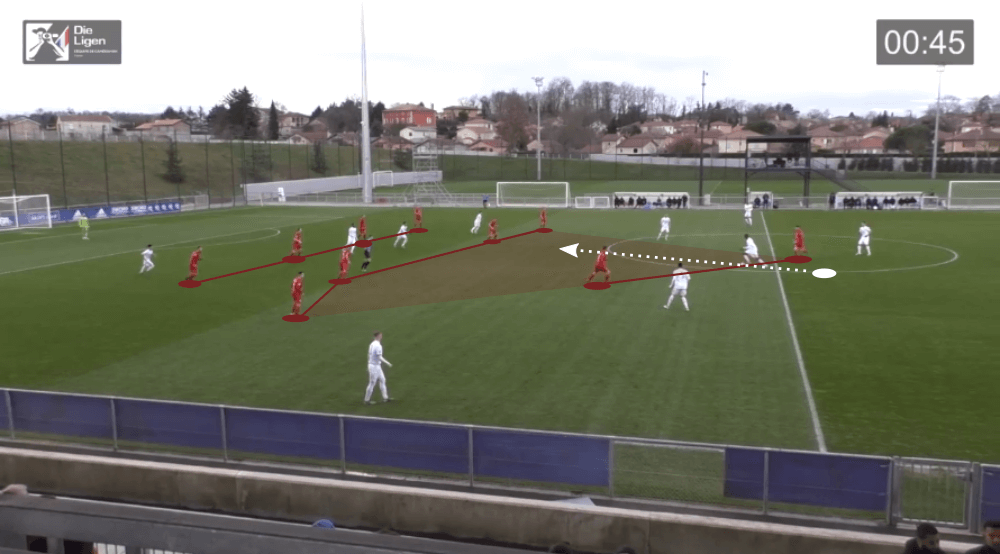 Solet is able to detect free space in the formation of the opponent, like in the situation above attempts to exploit it with dribbling. His weakness in those situations is clearly that he occasionally misses the perfect moment to pass the ball and keeps it too long.

Sometimes he brings himself into bad situations like in the shot below. In that situation, he could have passed the ball back to a defender and even had an option for a forward pass, but wanted to take on an additional opponent who then can win the duel against Solet. This is a perfect example which shows that he has the self-confidence to take on opponents but sometimes he stays too long on the ball, which results in unnecessary losses. 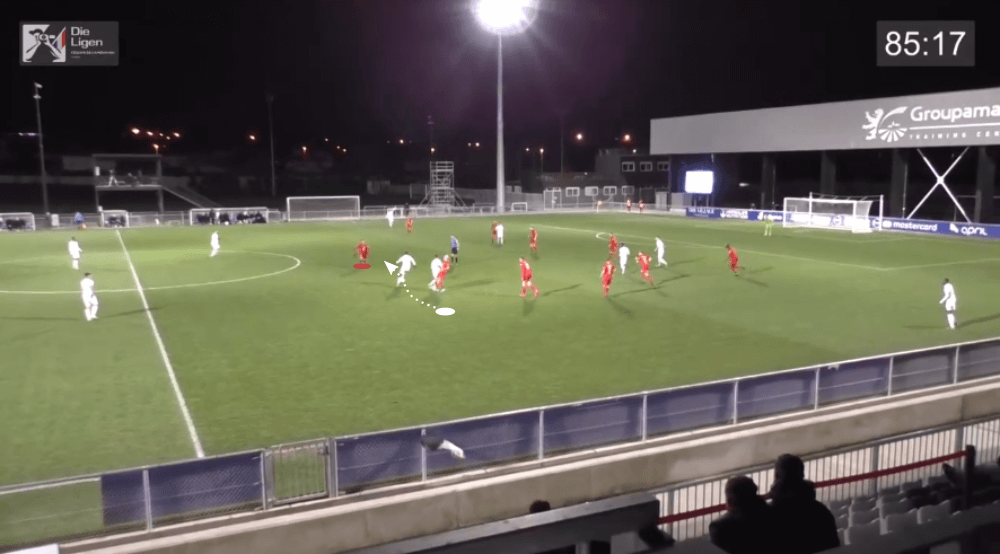 The 20-year-old is not just a technically gifted defender, he can make progressive runs and has proficient passing qualities for such a young player. At Olympique Lyon B he played on average 63.58 passes per 90 minutes, which shows that he was one of their central players when it comes to the circulation of the ball.

2.83 of these passes were long balls, showing us that he prefers to find a solution via short passes. Solet is not a player who frequently takes the risky option, and shows good decision-making in most situations. Due to that, he completes 88.13% of his passes when there is a perfect and quite secure option, continually seeking the progressive pass as we can see below. 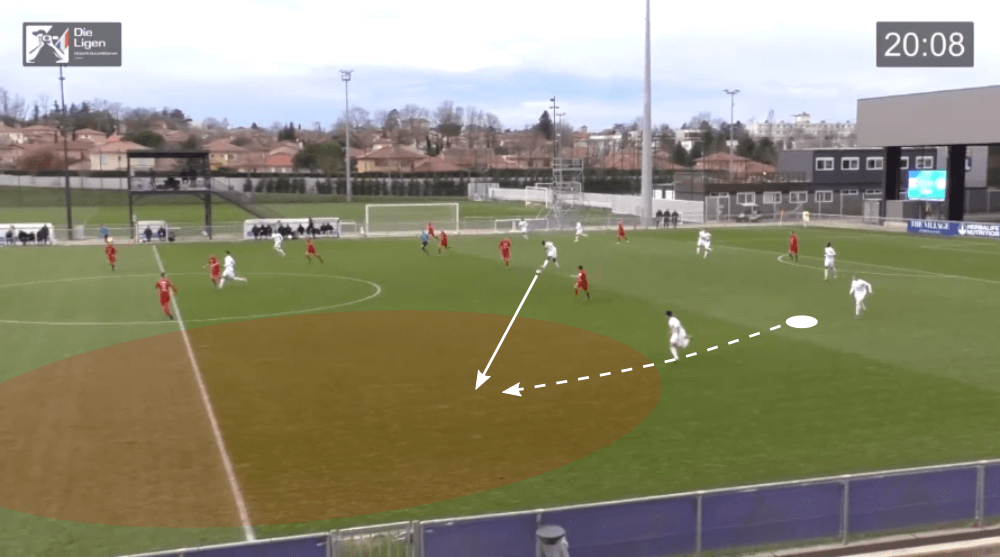 Even though the ball-playing qualities of defenders are nowadays very important, their defensive abilities are still the central aspects of their game. As we will see in this section of the tactical analysis, the defensive abilities of Solet are decent, but especially his speed and physical strength help him massively.

A central strength of the 20-year-old is that he stays in almost every situation very calm and doesn’t seem to panic. Instead, he always tries to force the opponent away from goal. All these aspects can be seen in the example below in the friendly against Liverpool. 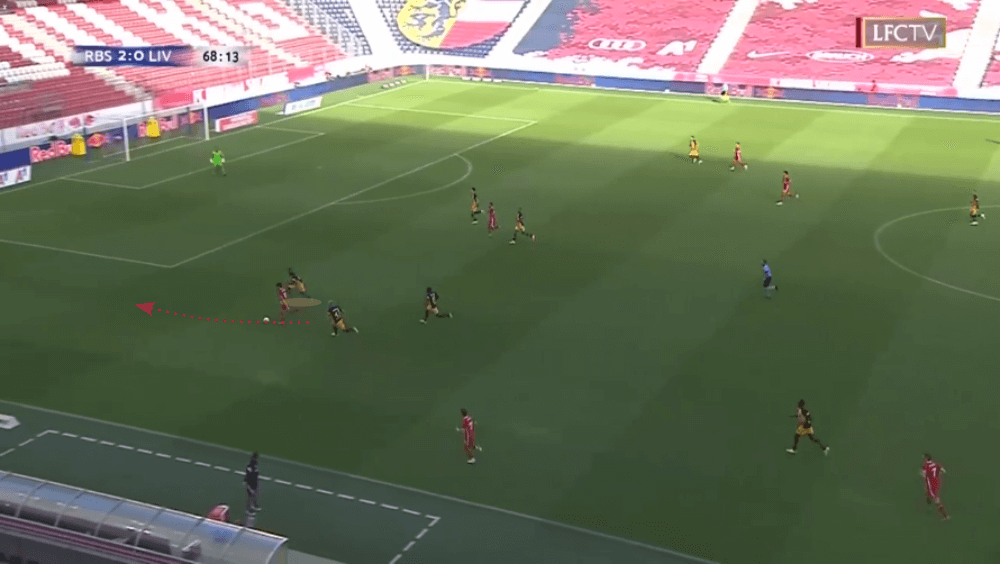 Solet wins 59.68% of his defensive duels what is a solid value but not too outstanding and shows that he definitely has to continue working on his behaviour in defensive duels. Furthermore, he makes 0.92 sliding tackles per 30 minutes of oppositional possession what shows us that he quite likes to go to the ground to tackle.

As already mentioned, he has decent acceleration and speed for a central defender what helps him also during the defensive phase as it makes it harder for his opponents to dribble past him as we can see in the next shot. He keeps up with the pace of the player on the ball to then make a decent sliding tackle. 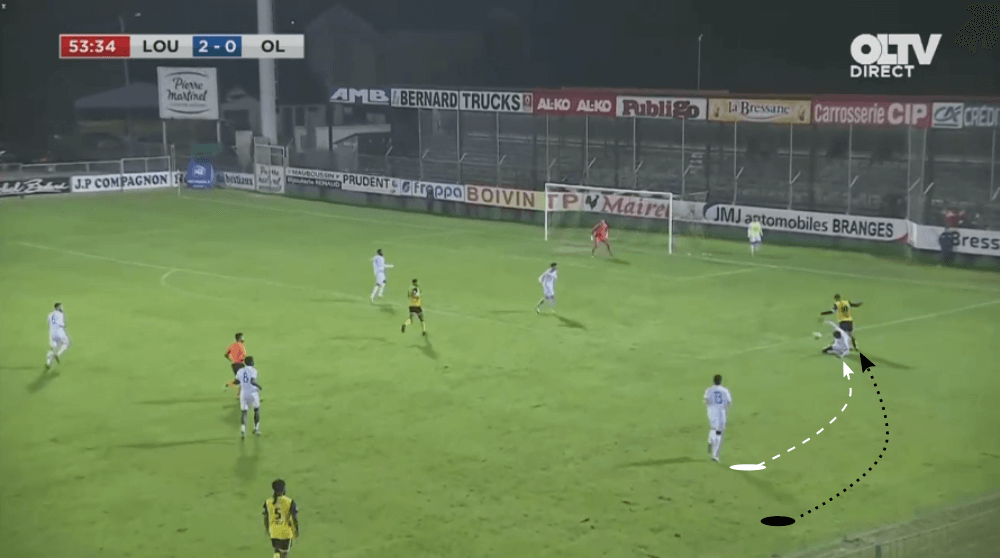 Solet stands at 192cm|6′3″ and is physically strong, which helps him not just to shield off the opponent when he dribbles, also to uses his body to recover the ball for his team. 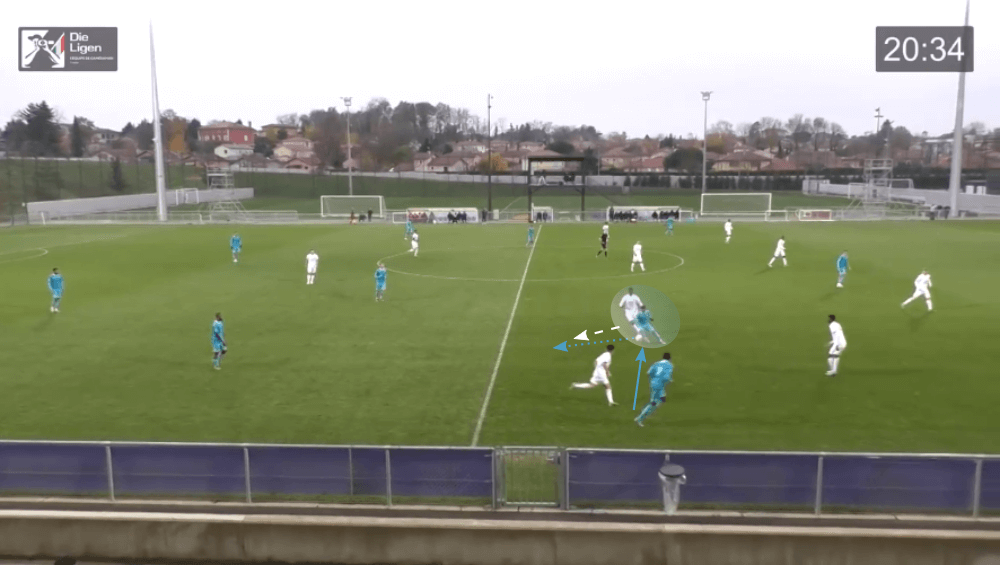 However, besides his abilities to win defensive duels, he also needs to work on his sloppiness in some moments. While he seems to be during the possession sometimes too self-confident what leads to situations where he stays for too long on the ball, during the defensive phase we can also see him sometimes being a bit sloppy or overconfident.

In those moments, it looks like he would know that he has the necessary speed and physical power to keep up with his opponent and therefore he doesn’t focus entirely on the space he has to defend. In the example below, he plays as a central midfielder, and his opponent starts a run to the inside. Instead of making a few steps to the side to give the opponent no chance to enter the space between the defence and the midfield, he opens up exactly that area for the opponent on the ball. 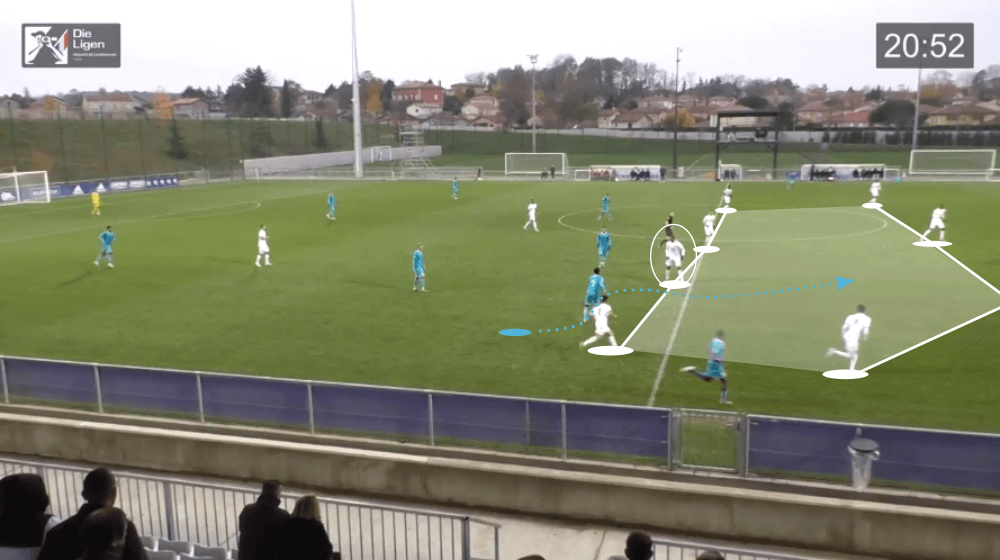 Still, he and his teammate were able to keep up with the player on the ball and then win the ball. Still, he should not get that sloppy in the Austrian Bundesliga or UEFA Champions League since such mistakes will be exploited by the opposition.

How he fits in at Salzburg

As already mentioned earlier in this tactical analysis in the form of a scout report, he played in his first two games for RB Salzburg as a central defender. Against Ajax Amsterdam, he got subbed on as left centre-back, and versus Liverpool, he moved to the right of central defence. RB Salzburg two most-used formations in the recent season were a 4-4-2 and a 3-5-2 while they tried a 4-2-3-1 in the recent friendly games.

Since they have several top-class central/defensive midfielders in Enock Mwepu, Mohamed Camara, Antoine Bernede, Ousmane Diakité, Majeed Ashimeru and Zlatko Junuzović, and with Nicolas Seiwald Youba Diarra two additional promising players who can play in that position, it is unlikely that he will play in midfield in the upcoming season.

In the central defence, Maximilian Wöber is the clear number one, and since he is the only left-footed centre-back, he plays in almost every game as a left central defender. Solet showed that he could also play on the left side, but as he mainly uses his dominant right foot, he clearly prefers to play on the right side.

In this position, he has Jérôme Onguéné, André Ramalho and Albert Vallci as competition. As Solet is also quite fast for a central defender, he can indeed also play as part of a back three.

In general, the Frenchman perfectly fits into RB Salzburg’s tactics and philosophy due to his pace and game IQ. Additionally, he is very self-confident for a player of his age and can efficiently deal with pressure from the opposition. It will be interesting to see how he will develop in the upcoming months.

Solet has the potential to be one of the next great players who find their place in one of Europe’s top leagues after showing decent performances at RB Salzburg. However, before that, he needs to work on his decision-making and defensive abilities to bring himself to the next level.

If Salzburg can keep all their centre-backs, they have for the upcoming season five quality central defenders of very high quality which means that they can rotate more when they have several fixtures per week.