In part one, I will focus on goalkeepers, centre-backs, full-backs and defensive midfielders. All players in the database played at least 25% of their teams minutes last season. I will conclude each chapter looking at which players performed best in their respective positions.

In part two I will analyse the rest of the positions and I will create a best eleven based on the data analysis. These players can be analysed further via video analysis to show if they are worth signing.

It is worth noting that the data is taken from the 2019/20 season so the statistics represent the most recent performances of the players. Players from Barrow and Harrogate Town were not included as only players in the national league and below are included, though the database will show some players that have moved to EFL clubs since writing this.

To understand the best performing goalkeepers, the primary skills are analysed. Statistics can represent the goalkeepers’ shot stopping extremely well and is also an indication that their handling is strong as they are able to save a high percentage of shots. Metrics such as reflexes and communication are difficult to quantify, however, will be understood through further analysis via video. 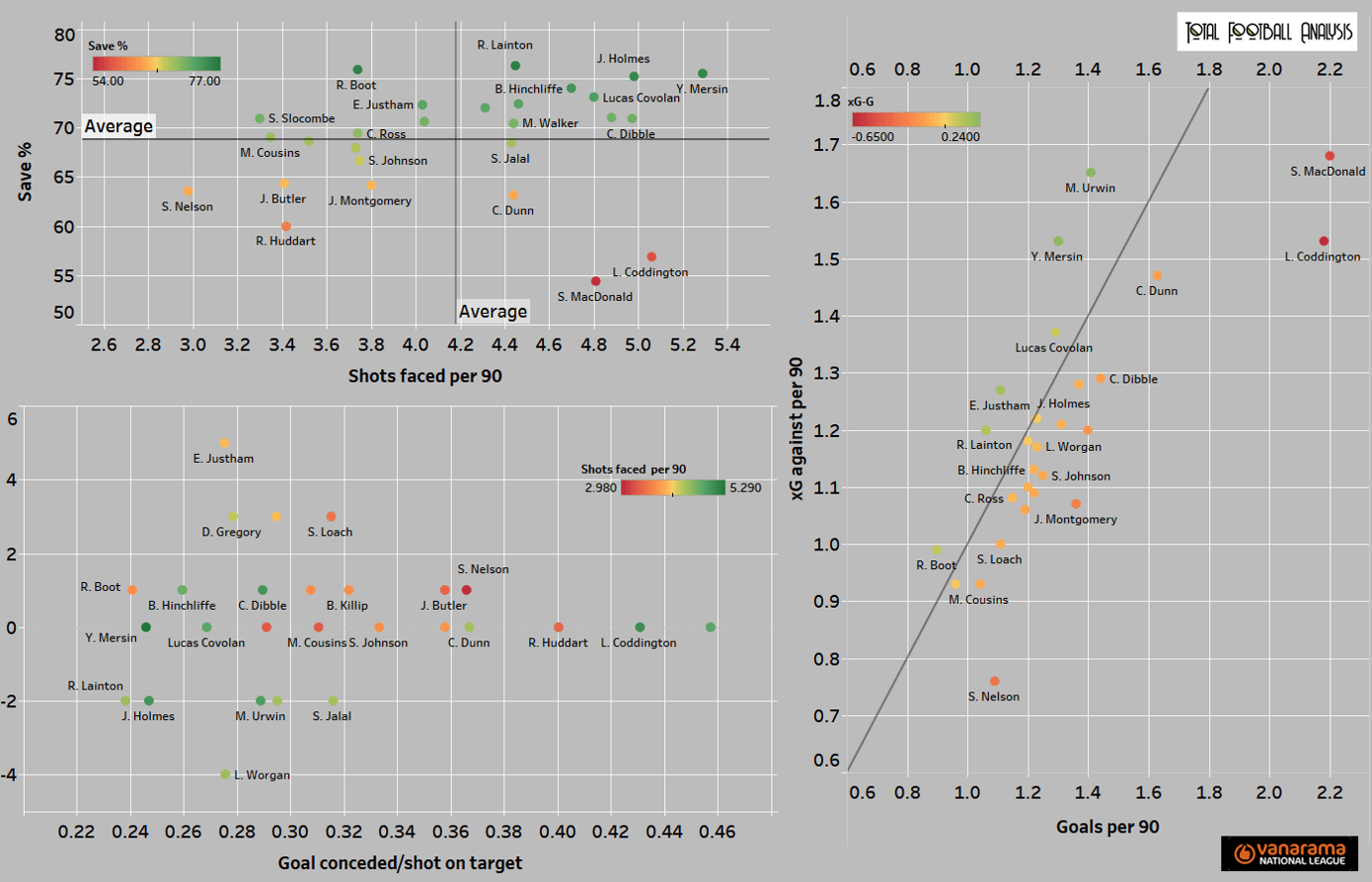 Yusuf Mersin is aged 24, he is likely to be playing below his peak and only conceded 0.23 fewer goals than expected per 90. Rob Lainton performs particularly well in the shot-stopping tests having had a save percentage of 76.24% and made nine clean sheets for a relegation-threatened Wrexham.

Ryan Boot helped Solihull Moors push towards the playoffs last season, he conceded 0.9 goals per 90 and made 12 clean sheets in the league as he on average only conceded one goal per four shots that he faced.

The visual above helps to create a shortlist, below I now compare the best performing goalkeepers which include two secondary tests (pass and long pass accuracy).

Mersin rates well in the second test, however, he only played 10 games for Dover Athletic last season, this made it hard to choose him over others who perform well and played more games. Boot’s statistics represent his strength in technical skills, he accurately made 77.36% of his passes last season, this will suit sides who like to transition via short passes.

Ryan Boot: His impressive shot-stopping and clean sheet statistics combined with his ability to pass well wins him his place. He is aged 25, therefore is likely to have not hit his peak as a goalkeeper yet.

Rob Lainton: The Wrexham goalkeeper could perform even better under a side challenging in higher positions or leagues, he performed close to Boot on the primary test, however, wasn’t so strong at the technical test.

I will first analyse the centre-backs’ primary (defensive) duties, as for many managers, it is essential for their centre-backs to execute their primary duties well. Hence, in this chapter, the centre-backs’ performance in the defensive statistics test will be more important than the secondary (technical) test in the final eleven. All centre-backs will be analysed for the primary statistics.

Scott Leather and Ricardo Santos are the best overall performers in the ground and aerial duel tests. Leather would have to be scouted further as he only appeared in 11 Chorley matches (all in the first half of the season) but impressively won 68.97% of his aerial duels.

Santos performs well across both having won 77.17% of his defensive duels to dispossess the opposition, at the time of writing he moved to Bolton Wanderers and will be a great addition as they push for promotion in League Two.

Another player on the move is Joe Ellul who moved to National League South side Maidstone United from Maidenhead United. He is highly proactive having made 16.02 defensive actions per 90.

Stockport centre-back Ashley Palmer has no defensive weakness, most impressively he committed less than one foul per game. Palmer’s most impressive stats are 12.92 interceptions per 90 and blocked 0.90 shots per 90, he appears to have strong reactions by reacting to produce high action statistics, to intervene in opposition attacks.

The next test analyses each centre-backs technical skills. The test includes those whose statistics show strong technical skill and the best performing defensive players from the previous test.

Notts County centre-backs Alex Lacey and Ben Turner helped their side control possession in a number of games as they made 42.11 and 40.36 passes per 90 respectively while having a high pass accuracy of 81.96% and 78.12% respectively.

Callum Reynolds and Dan Sweeney are shown to be brave in possession having ranked highly on progressive passes and progressive runs. They’re also one of the best at retaining possession when challenged. Sweeney has signed for Forest Green Rovers, more evidence that players can make the jump from National League to EFL.

Leather is also shown to perform well in his secondary duties having retained possession when challenged 63.34% of times.

Ashley Palmer: He is the most well-rounded in the defensive metrics, he shows impressive reactiveness to opposition attacks by making high blocks and interceptions and has an above-average success rate in duels. He would suit a central defender role rather than ball-playing, four of his five goals were headers as he is also a threat from set-pieces.

Callum Reynolds: Just signed for Dagenham & Redbridge, however, fits the ball-playing defender role as he is brave in possession and had a back pass success rate of 93.44%, this will help reduce the number of technical mistakes made in the defensive third if the opposition look to exploit poor back passes.

Note: Some potential starters weren’t picked due to joining EFL clubs so only one centre-back has been chosen for the best eleven.

The best defensive full-backs from the database are analysed based on their z-score ranking, all players included had a duel success rate greater than average on both metrics to find the best defensive players. 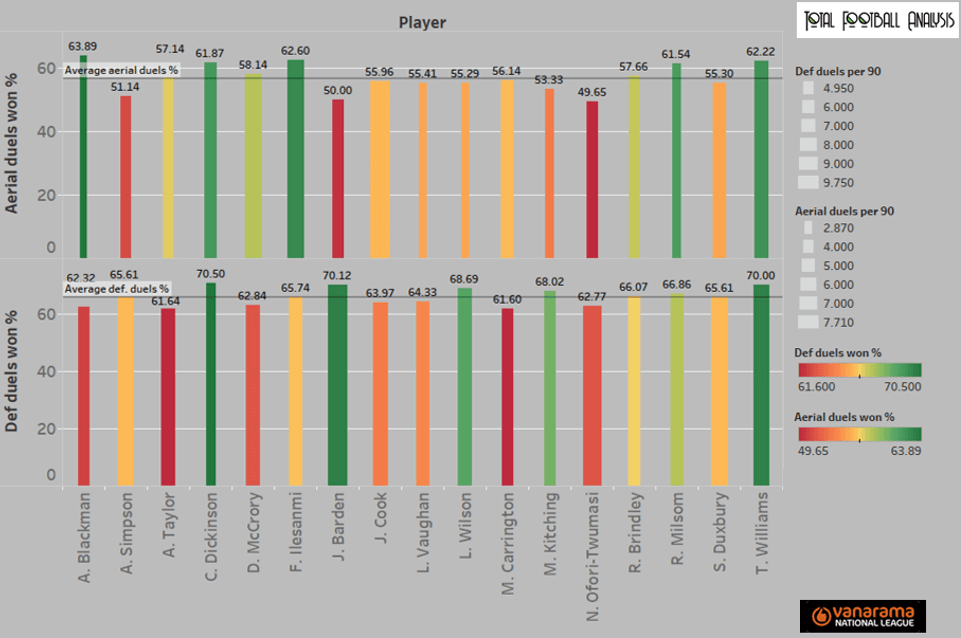 Boreham Wood’s Femi Ilesanmi made the greatest number of successful aerial wins per 90 having won 62.60% of his 6.47 aerial duels per 90. Andre Blackman started his youth career at Arsenal and at 29 is around the peak of his career, he is involved in limited defensive actions but won 63.89% of his 2.87 aerial duels per 90.

The next test will analyse the secondary skills as some sides like to play with wing-backs or attacking full-backs. 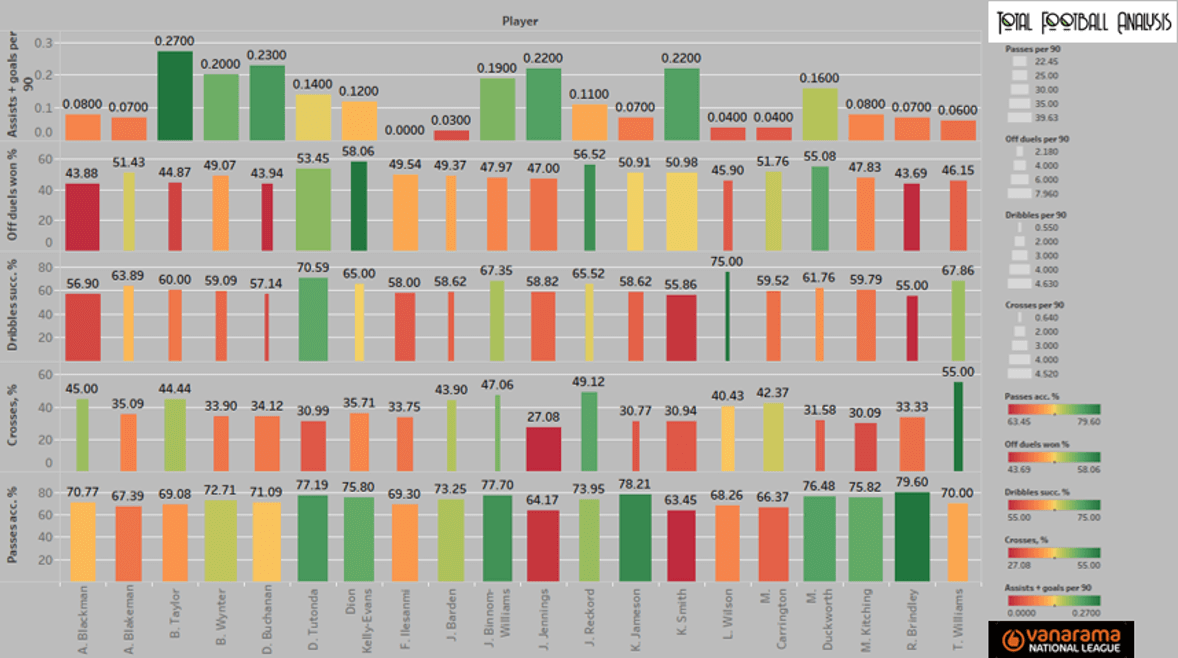 Kyle Jameson is only aged 21 and has just been released by AFC Flyde. Surprising given that he performed relatively well across the metrics, particularly in passing where he completed 78.21% of his 36.81 per 90 passes, his ability to play at centre-back is also an advantage.

Left-back David Tutonda is another who has just joined the EFL, with Bristol Rovers. He performed well on all technical metrics especially given that he was involved in a high number of events in each metric.

Notts County right-back Dion Kelly-Evans performed well in his individual battles having had a success rate of 58.06% in offensive duels and 65.00% in dribbles as he can keep the ball when challenged.

Bobby Taylor has just joined relegated Ebbsfleet United. He scored two goals and made five assists last season and has the ability to play in at least the National League. David Buchanan made six assists at left-back for Chesterfield last season and James Jennings impressed with four goals and three assists at Stockport County.

Tyrone Williams: Performed well on all primary and secondary metrics. What was particularly impressive was his ability to win any type of duel and boast a 55% cross accuracy and 67.86% dribble success rate, ranking high on both these metrics.

Richard Brindley(RB): Performs well in both duties, looks to be strong in passing and defensive duels.

Matt Kitching(LB): Another who performs well both in defence and attack. He is best in defensive duels, passing and dribbles. A great investment at only 24 years of age.

Nicky Featherstone performs well having successfully passed 87.77% of his 52.59 passes per 90. He is also shown to be key in the Hartlepool United side in terms of transitions as 17.77 passes per 90 were forward and 7.06 were progressive, key for sides who look to transition quickly from defence to attack.

Ex-Chelsea youth player Danny Philliskirk is the second-best performing, most impressively he made 9.33 final third passes per 90 and 74.13% of these were accurate. This is evidence of his ability to affect the opposition defensive third from the defensive midfield position.

We will now look at the players’ defensive ability. 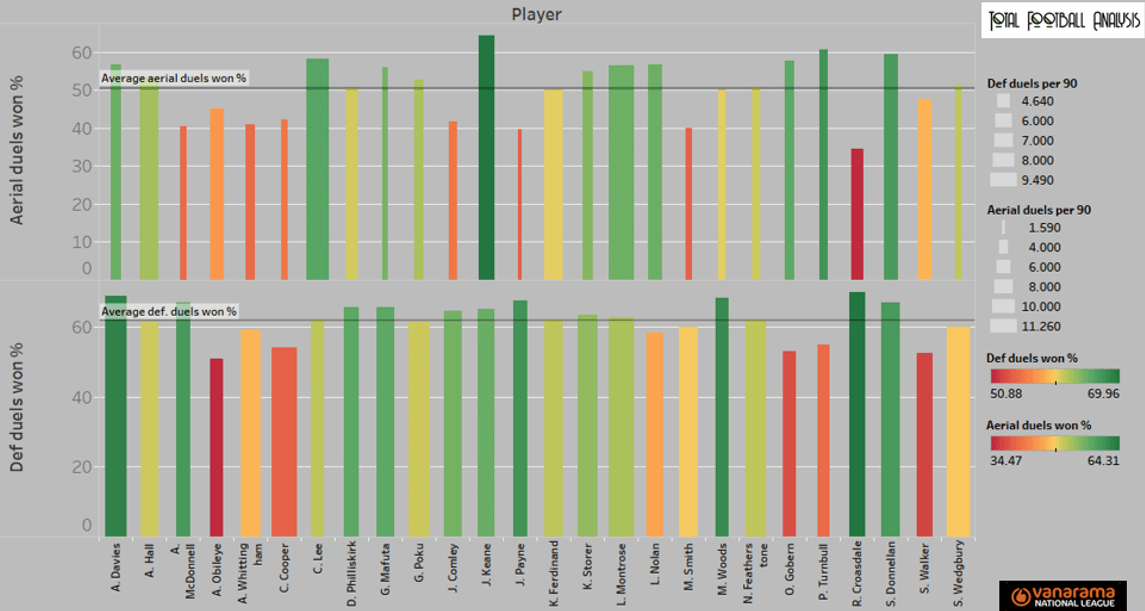 Ryan Croasdale and Aron Davies are the best in defensive duels having won 69.96% and 68.87% of their duels respectively per 90. Davies also competed in 8.17 defensive duels per 90 making his statistics even more impressive.

Godfrey Poku ranks as a strong reader of the game as he made 10.18 possession adjusted interceptions per 90. Keane and Philliskirk performed well in previous metrics and impressed again here.

Nicky Featherstone: The 31-year old excels in the technical metrics as he shows to be a brave passer, important in helping sides transition quickly while retaining possession. He doesn’t perform badly defensively either as he performed at average in the duel percentage wins.

Danny Philliskirk: Was a close second best to Featherstone as he has shown to be a good passer. He is also shown to be a good all-rounder having won 65.81% of his defensive duels and made a high number of possession adjusted interceptions.

This data analysis has provided insight into those that could make the jump into the EFL. Some players have already made the jump when writing this and are evidence that using statistics is advantageous to identifying players to sign as ex-Barnet duo Santos and Tutonda really impressed and have joined EFL clubs.

I hope that some players who have been identified in the conclusion of each chapter may be signed by EFL clubs in the near future as each player’s statistics indicate that they could be ready to join the EFL. These players can be shown in the image below where a three at the back formation has been chosen, the full-backs are at left and right centre-back. The centre-back analysis found that two players had already left their side to EFL clubs. 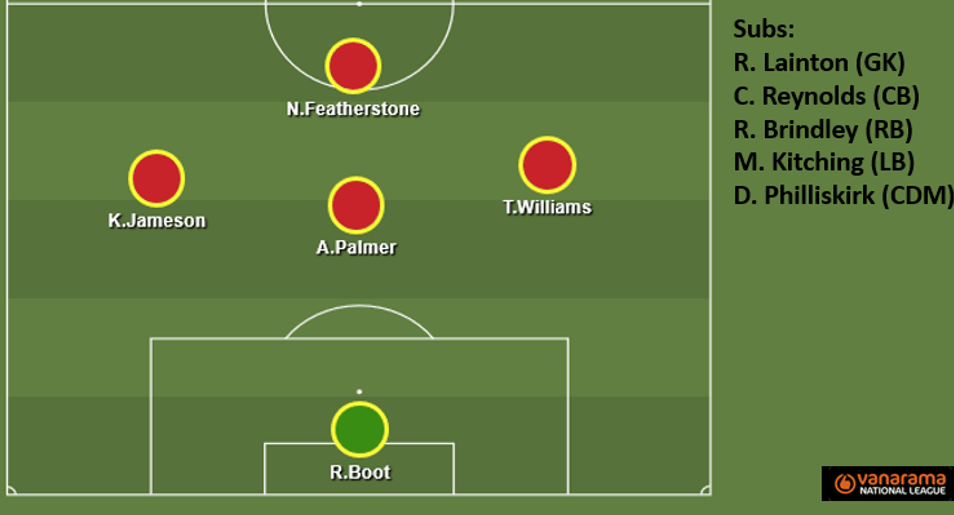 In part two I will analyse central midfielders, attacking midfielders, wingers and strikers as I look to produce a starting line-up and substitutes bench of players that can make the jump to the EFL.