First-placed Salzburg played against fourth-placed Wolfsberger for the second time in a week, in this Austrian Bundesliga fixture. Despite having a 2-0 lead, and, frankly, controlling the majority of the game, Salzburg were unable to hold onto victory as Wolfsberger staged a late comeback to ensure the game finished level.

This tactical analysis gives an in-depth analysis of the tactics used by both teams in this 2-2 draw.

Having drawn 0-0 with one another only four days before this there were unsurprisingly some personnel changes, and even formation changes between the sides.

Salzburg still lined up in a 4-4-2 formation, however, Maximilian Wöber, Patrick Farkas, Zlatko Junuzović, Enock Mwepu, and Patson Daka all came into the starting line-up. Daka has caught the eye, particularly since Erling Haaland left for the Bundesliga and Borussia Dortmund, and will no doubt catch the eye of many in Europe when Salzburg compete in the Champions League again, just as so many of their players did this season.

Wolfsberger made the biggest change, swapping from the 3-4-1-2 they had used earlier in the week for a 4-2-3-1, with Lukas Schöfl, Christopher Wernitznig and Mario Leitgeb coming into their starting line-up, with Cheikhou Dieng playing by himself up front, without the reported Celtic target, Shon Weissman alongside him. 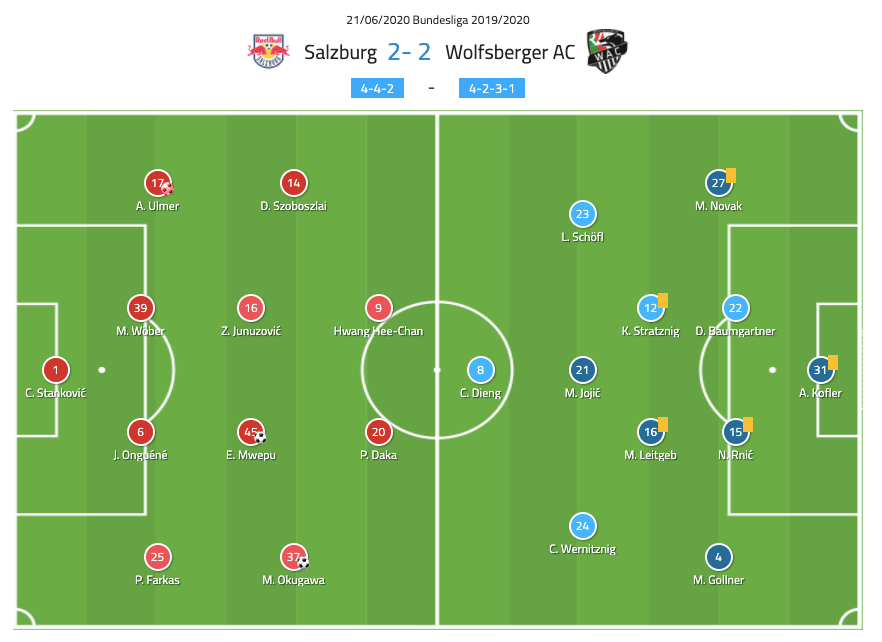 Salzburg were dominant in attack and will deeply regret not putting this game to bed. They took 19 shots, with nine on target, and their xG of 2.25 clearly eclipsed that of Wolfsberger’s 0.52 xG.

They played out from the back as you’d expect, however, were quite direct in their approach, constantly looking for options behind the Wolfsberger defence, and we saw them consistently able to pick out players behind their defence, specifically on the left side.

It seemed Jesse Marsch had targeted Wolfsberger’s relatively high line and had singled out the right side of their defence as a potential weakness. Daka would drop out onto this side, and with Wöber, in particular, who’s long passing ability is outstanding, Salzburg would launch direct, low trajectory passes at the space between Dominik Baumgartner and Michael Novak. This approach was very successful in quickly getting in behind the opposition, however, they were unable to take advantage of these opportunities and score from them.

Over the course of the game, they had an average pass length of 20.33 metres, which is impressive bearing in mind they had just under 60% possession.

We can see how often they targeted this side during positional attacks in the image below. 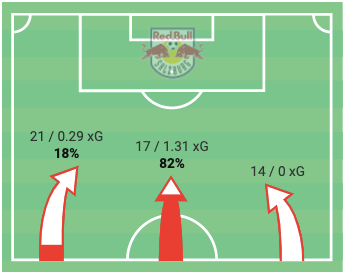 We can see examples of this approach from Salzburg below. As soon as Wöber, for example, took a big touch out of his feet from this sort of range, this was the trigger for whichever player who was on the shoulder of Novak, to make a cut in behind the defence. 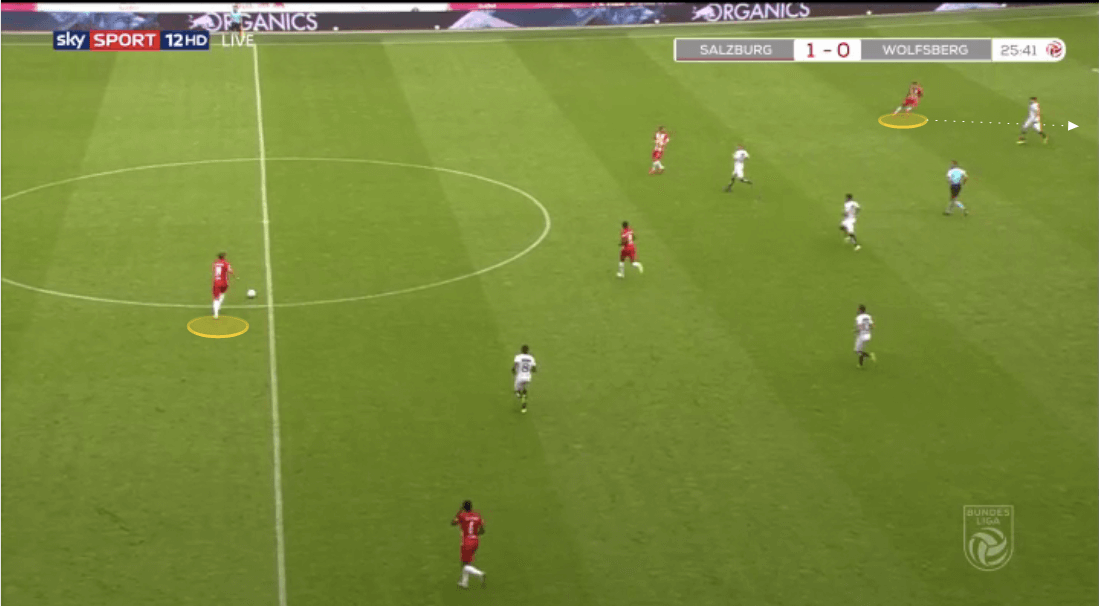 I spoke of the passes being of a low trajectory and this is important with these kinds of direct passes. The space between the defenders is minimal, and should the pass be lofted, it can easily be cut out. This makes this type of pass difficult to execute, but if it is done well, as Salzburg were able to do, it proves to be more difficult for the defenders to deal with.

Below we see another example, this time with Daka dropping out wide into this area, and with his pace, he’s incredibly difficult to play against if he has space to run onto a long pass behind the opposition defence. 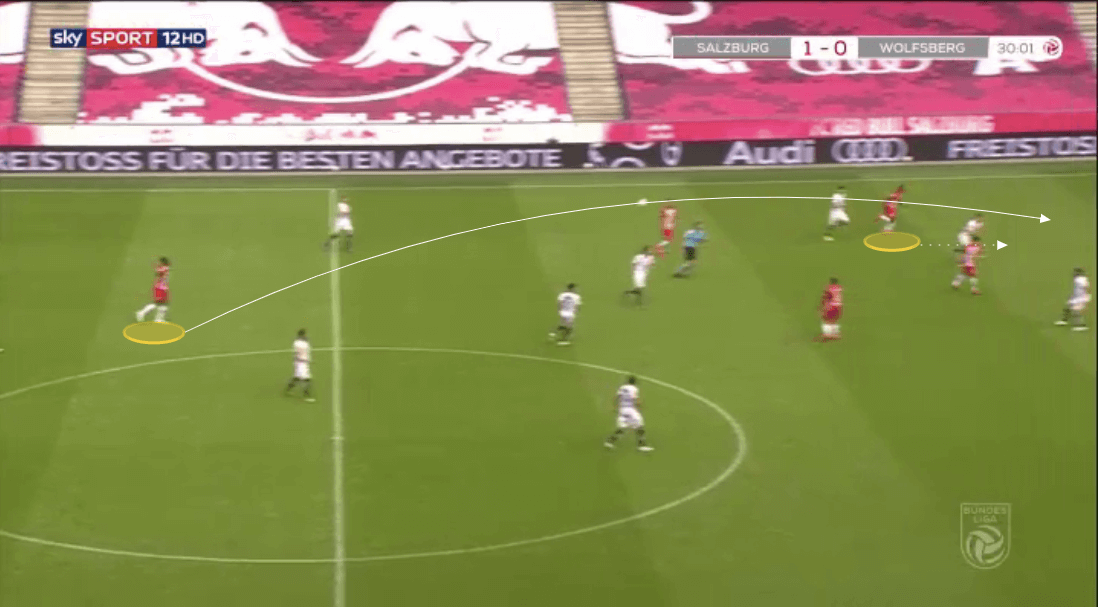 Creating space between the Wolfsberger defence

Firstly, Salzburg would look to stretch the play, particularly with their full-backs taking high and wide positions, and in doing so allow Masaya Okugawa and Dominik Szoboszlai to drift inside into the half-spaces as and when they saw fit.

The threat from Salzburg’s full-backs as crossers meant they would encourage Wolfsbeurger’s defence to push wide to press them when they had possession. However, to begin with, Salzburg wanted to get Wolfsberger narrow. To do this they wouldn’t always play the diagonal ball to the wing straight away. They wanted to give the full-backs as much time as possible to make the cross, so a quick pass inside to one of the central-midfielders, like we can see below, drew Wolfsberger’s attention to the centre of the pitch and kept them narrow just that little bit longer before Salzburg looked to play in one of their high-positioned full-backs. 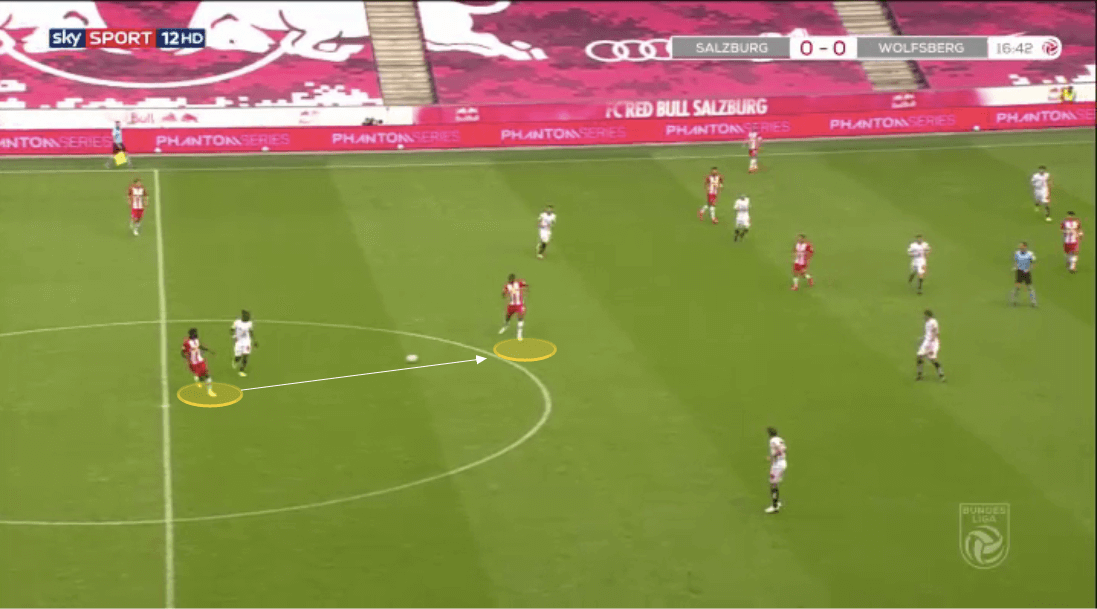 Here we can see Farkas receive the ball in plenty of space on the right flank, before making a cross. 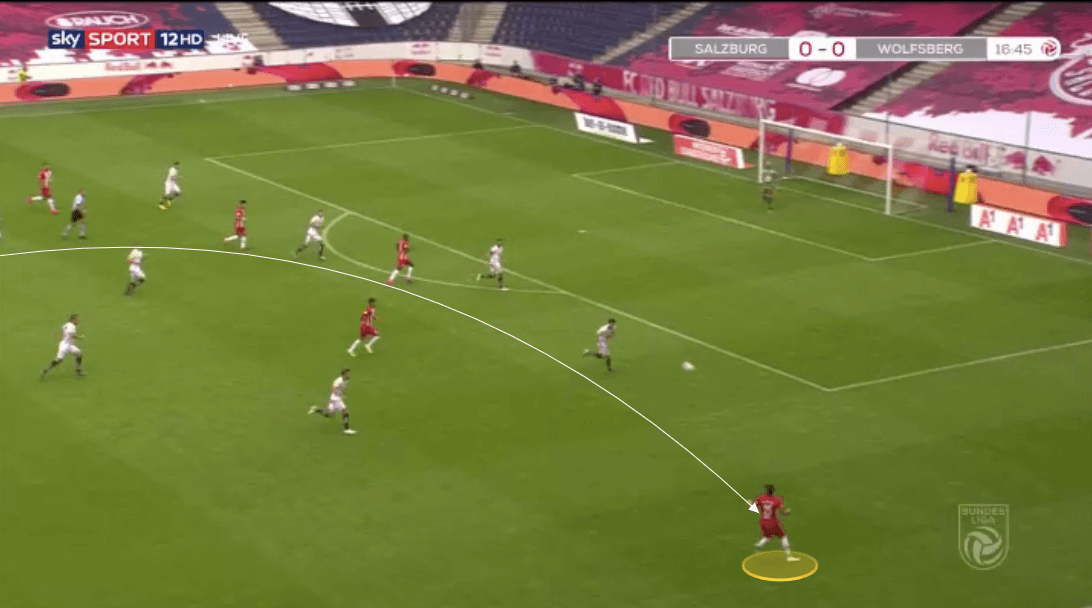 With Farkas and Andreas Ulmer putting crosses in, they were able to draw the opposition full-backs towards them more frequently. Below we can see Farkas has the attention of Wolfsberger’s left-back Manfred Gollner. Okugawa is positioned well inside, almost as a central-midfielder, and with Gollner getting drawn out is able to run in behind the Wolfsberger defence and receive the pass over the top. 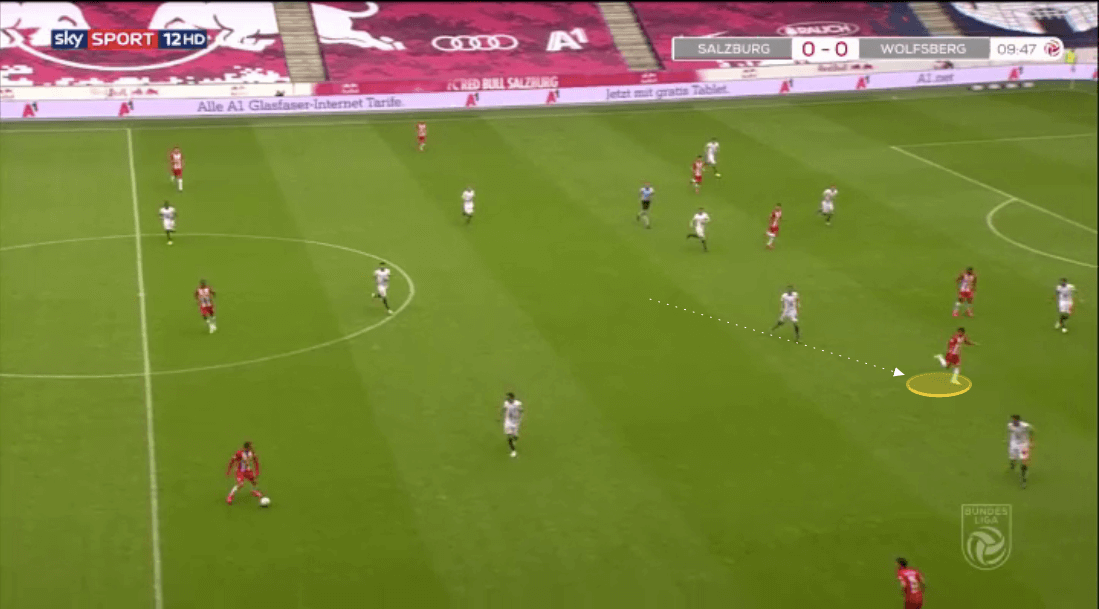 As he receives the pass we can see how stretched this made the Wolfsberger defence, with Daka inside in between the two centre-backs, and in fact, there is actually a 2v1 on Baumgartner. 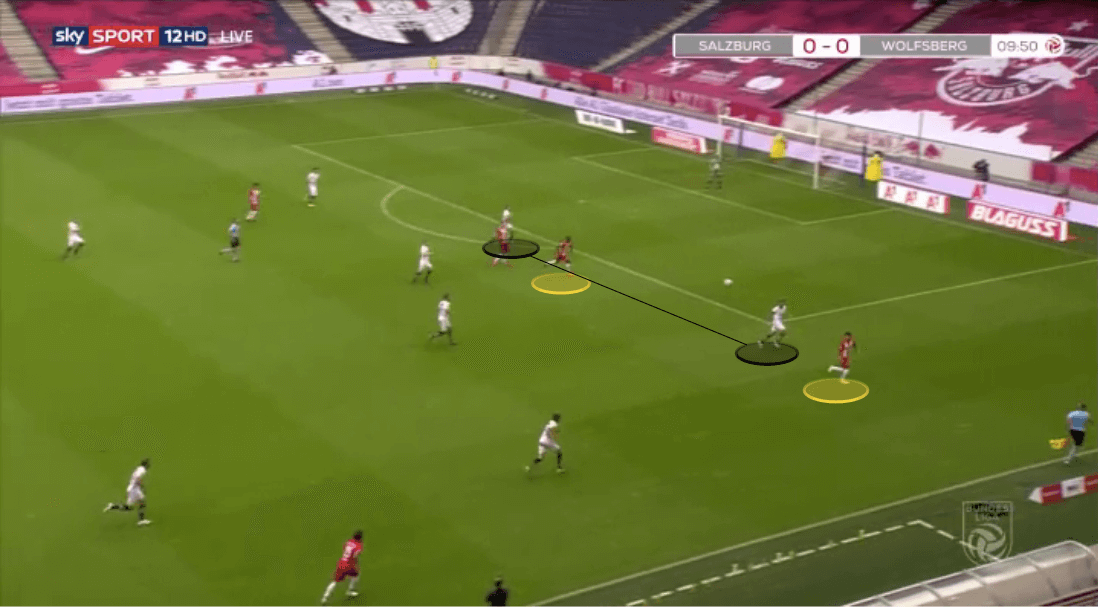 Hwang Hee-Chan showed a moment of individual brilliance to stretch the Wolfsberger defence for the opening goal for Salzburg. He engaged two Wolfsberger defenders, driving across the centre of the pitch, whilst Okugawa pushed forward into a centre-forward position. 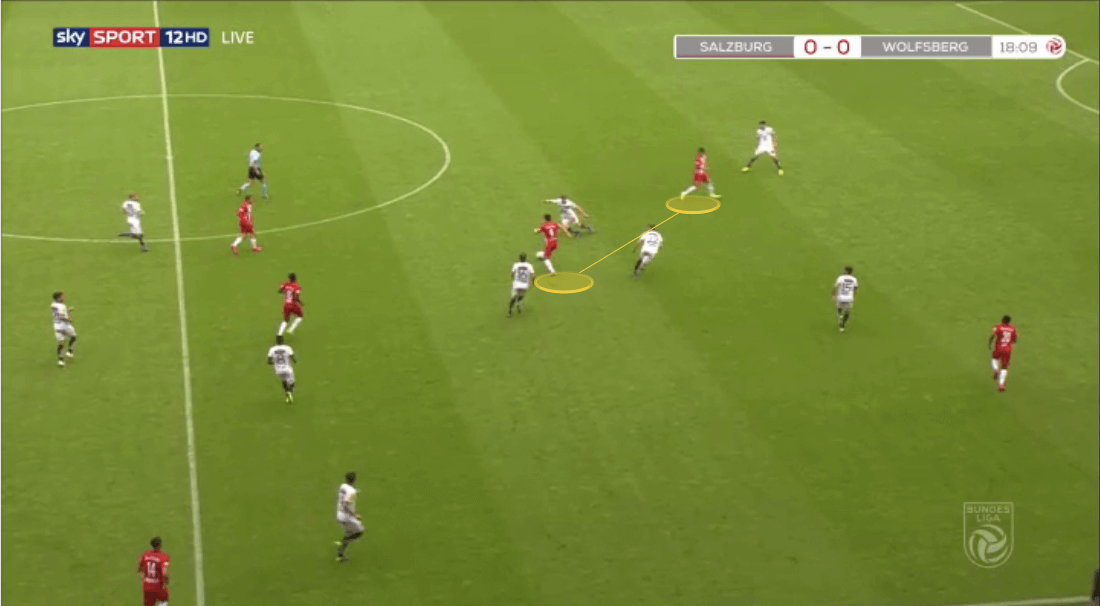 Hee-Chan was able to beat both of these players and we can see in the image above how unbalanced the Wolfsberger back four is in this instance.

The forward was then able to slide the ball through the middle of the Wolfsberger back four for Okugawa to run onto. 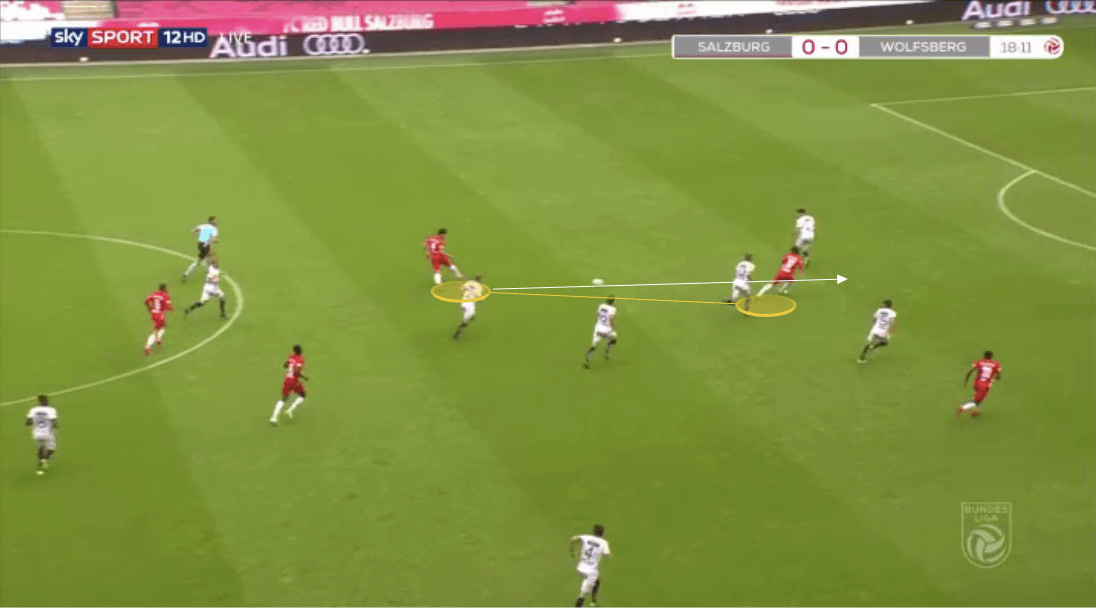 Wolfsberger’s struggles against the Salzburg press

Wolfsberger remained committed to playing out from the back for the whole game despite Salzburg’s intense press.

Salzburg maintained an average PPDA lower than six for the game, and we can see that, particularly in the first half, they showed real intensity in their desire to win the ball back. 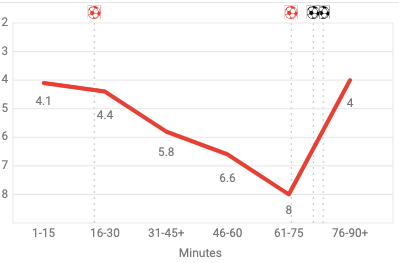 Salzburg looked to set up a trap to win back possession in the centre of the pitch, and counter quickly with Daka and Hee-Chan ahead of the ball. To do this they would ensure that the only passing option available for Wolfsberger was inside to the central-midfielders, who they would leave open momentarily, before pressing incredibly aggressively. With Wolfsberger so committed to playing out, Salzburg knew they could trap them in this area.

Below we can see an example of this as Salzburg’s frontline hurry Wolfsberger’s defence into playing out. However, as soon as the pass is played into the pivot in this example, there is immediate pressure on this player from two directions. 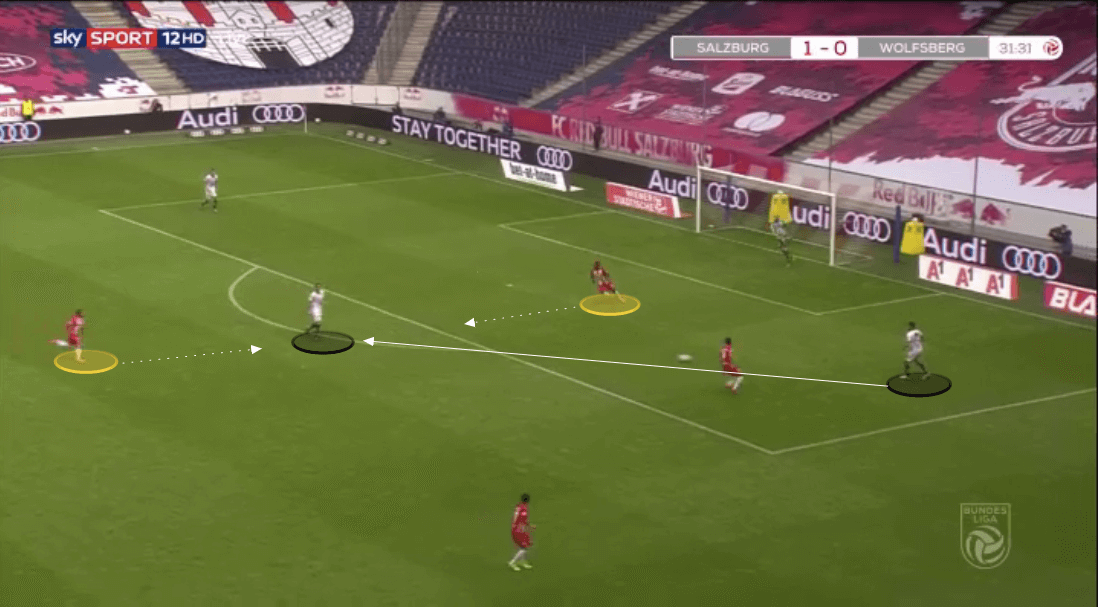 The pivot then looks to play his way out of trouble, but we can see how quickly this becomes an impossible task as Salzburg’s frontline swarms the ball-carrier, whilst their midfielders respond by man-marking any forward passing options for the away team. 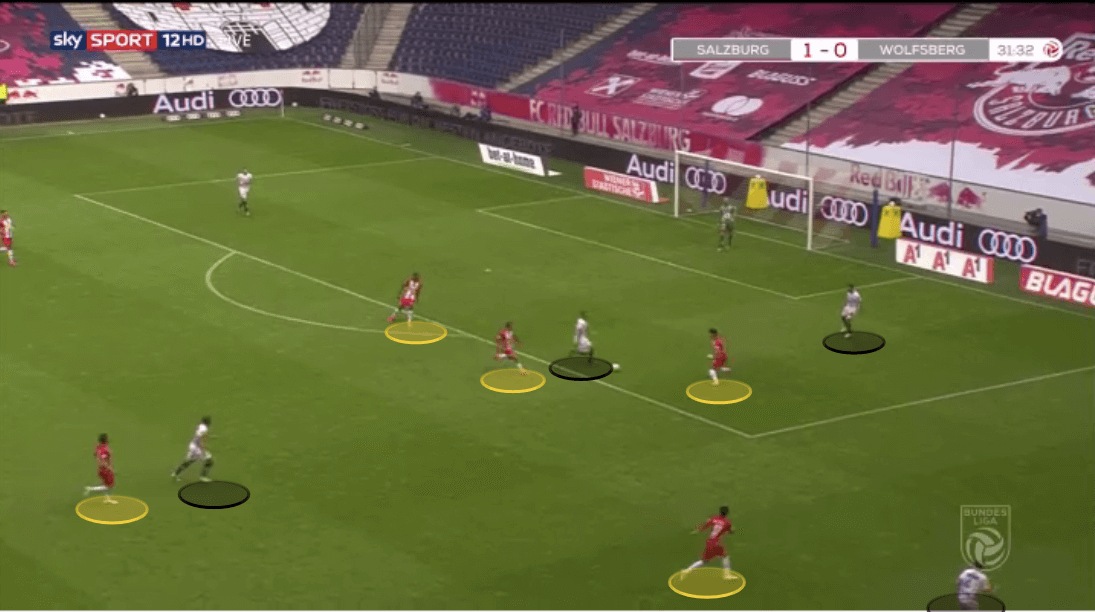 Wolfsberger still continued to seek to play out from the back despite this, and we can see in this example how Salzburg didn’t refrain in their approach either, having their attackers camped outside the 18-yard-box, ready to press the centre-backs as soon as they received possession front he Wolfsberger goal-kick. 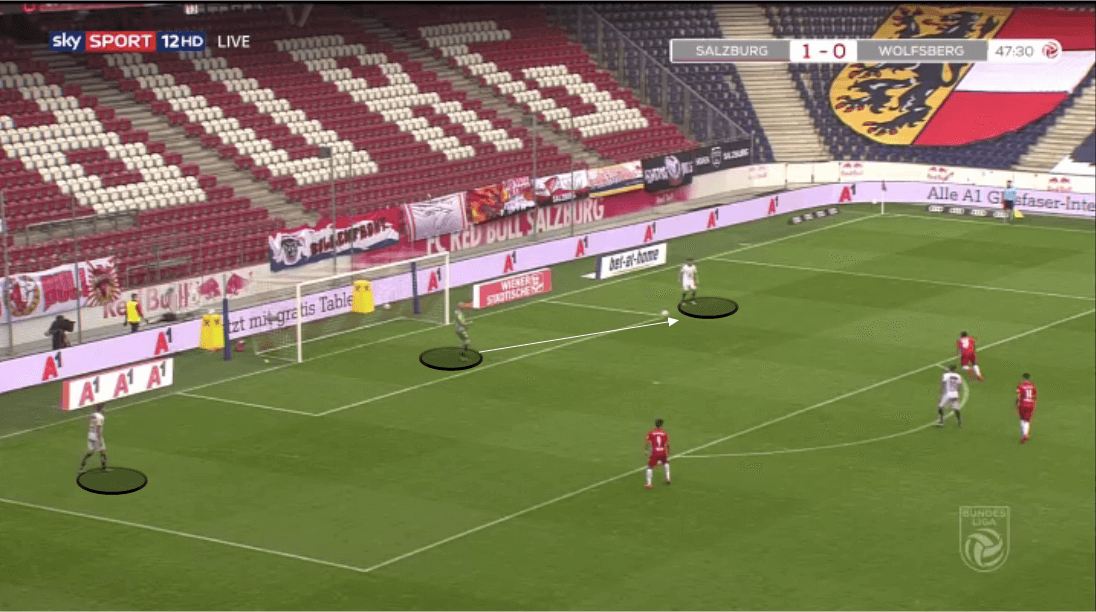 The ball is worked wide into Gollner. His only forward passing option is inside into central-midfield. Once again Salzburg left this option open and quickly pressed once again to regain possession in this area. It was surprising to see how relaxed Wolfsberger’s players looked on the ball, continuously getting caught in possession as they looked to play out, and Salzburg should have capitalized on this more than they did, albeit their second goal came from Wolfsberger overplaying, trying to play out and break Salzburg’s press, and getting countered quickly and effectively. 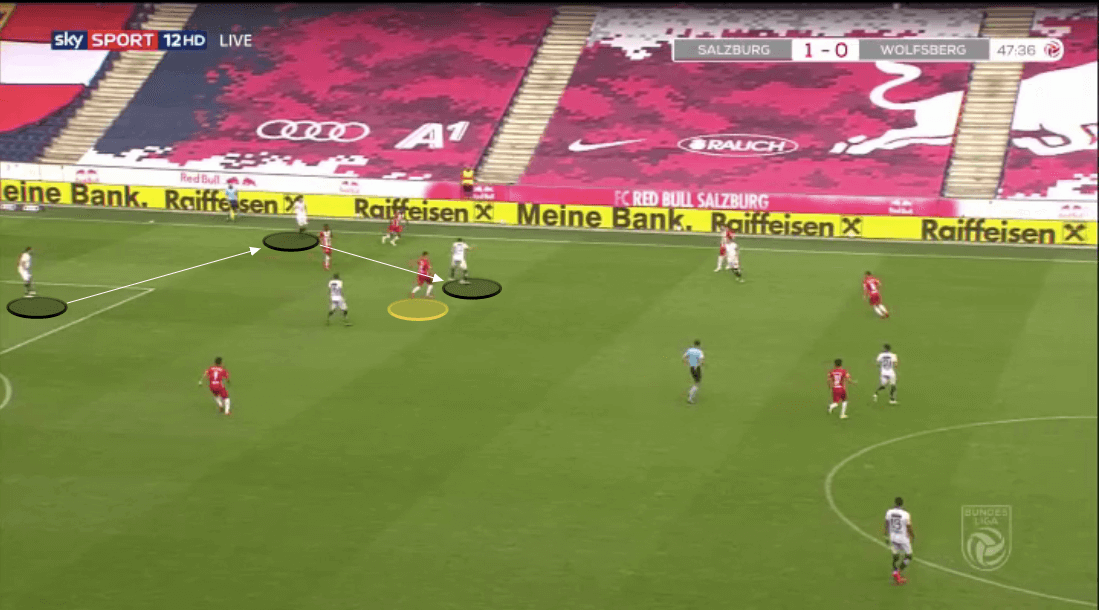 Despite their troubles against Salzburg’s press, plenty of credit needs to be given to Wolfsberger, for managing to stay in the game and taking their chances when they came. They only managed two shots in the second-half and they took both of these.

Salzburg dominated the game other than for a few spells and stretched the opposition both horizontally and vertically as they broke them down with long passes behind the Wolfsberger defence, and effective switches of play, which opened up space between the defence as well. Had they been slightly more clinical at either end of the pitch, and this would have been a comfortable three points for the home team.

As much as Salzburg are in control of the league following Linz’s point deduction, they will be disappointed to drop a point here, where a win would have extended their lead to eight points.