Pressing is a significant part of the modern game with many articles and videos online describing in detail tactical analysis on how top coaches’ teams implement a press such as Klopp and Guardiola. In this article, I will be focusing on how to coach pressing and provide details on the key principles required when coaching this topic. The positive result of successful pressing is primarily recovering possession upon which we then transition to attack (T2A). With keeping the result or consequence in mind when coaching a topic, it is important to include the transition, in this instance T2A. For this topic, we are looking to disturb the build-up in the defensive phase and then create a goal-scoring opportunity in the T2A. The formation specified in this article is the 4-2-3-1 however the principles and information on how to coach pressing can be applied across all formations. In the below image we see an overview of the structure of football. 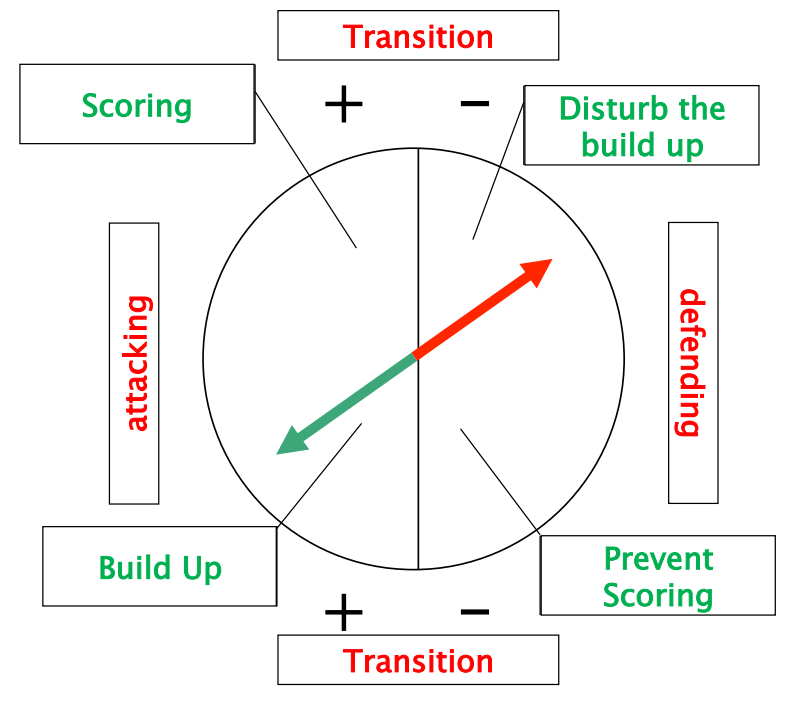 First, it is important to know the key principles of pressing. These principles will need to be the building blocks for a coaching session on pressing.

The next item to be defined is the why to your pressing, let’s review below three reasons coaches want their teams to press with example solutions.

Recover possession high in the opposition’s half

To recover possession high, we first establish a line of pressure. A good position for this is the 18-yard box and the trigger for the press is when the centre-back steps forward with the ball upon receiving a pass. We initially start in a central position with the wide men screening passing lanes by covering space and the full-backs. The line of defence is high up the pitch close to the halfway line. As the centre-back receives the ball the striker notices the trigger, then presses the centre-back with a curved run closing off passing options to the keeper and the opposite centre-back. To force the play into wide-area the winger should take a position more centrally at a point where the player is comfortable they can still sprint to the full-back as the ball is travelling from the centre-back. To force the play centrally the winger needs to close off the pass to the full-back by taking a position closer to the defender dissuading the centre-back to play this option. In both situations, this will leave the centre-back with only one ground pass option. The defence needs to be aware of the centre-backs body language and should drop accordingly if the player looks to play a long ball. 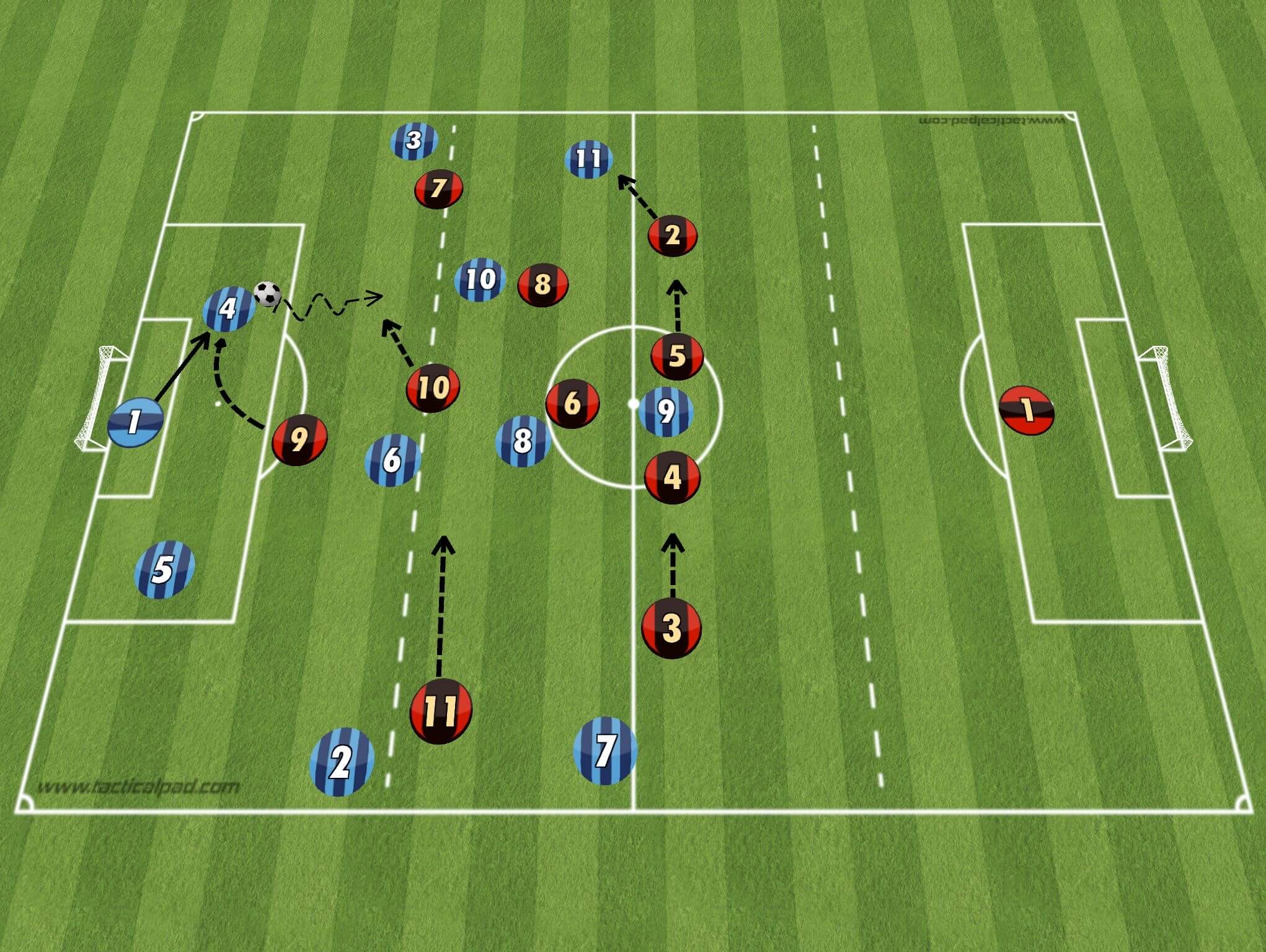 In this scenario, we are more focused on keeping the ball away from or pressing the ball to a particular player or side. From analysing the opposition, you may have found a weakness that you want to exploit or a strength that you want to mitigate. Making play predictable works best when you can press play into an area of weakness for the opposition at the same time as removing or limiting a strength. A simple example of weakness would be if the right centre-back lacked composure on the ball under high pressure. An example of strength would be if a player’s skill was dropping into the half-space on the left side to receive the ball between the units. Then playing a quick pass to break the defensive line from his right foot. In both instances above, the team would close off the left-hand side of the pitch as seen below encouraging the passing option to the right centre-back and using the pressing trigger of the ball travelling to the player to begin the press. If the opposition at some point breaks the press on the right-hand side the player can still not receive the ball in the preferred area on left, in turn, mitigating this strength. 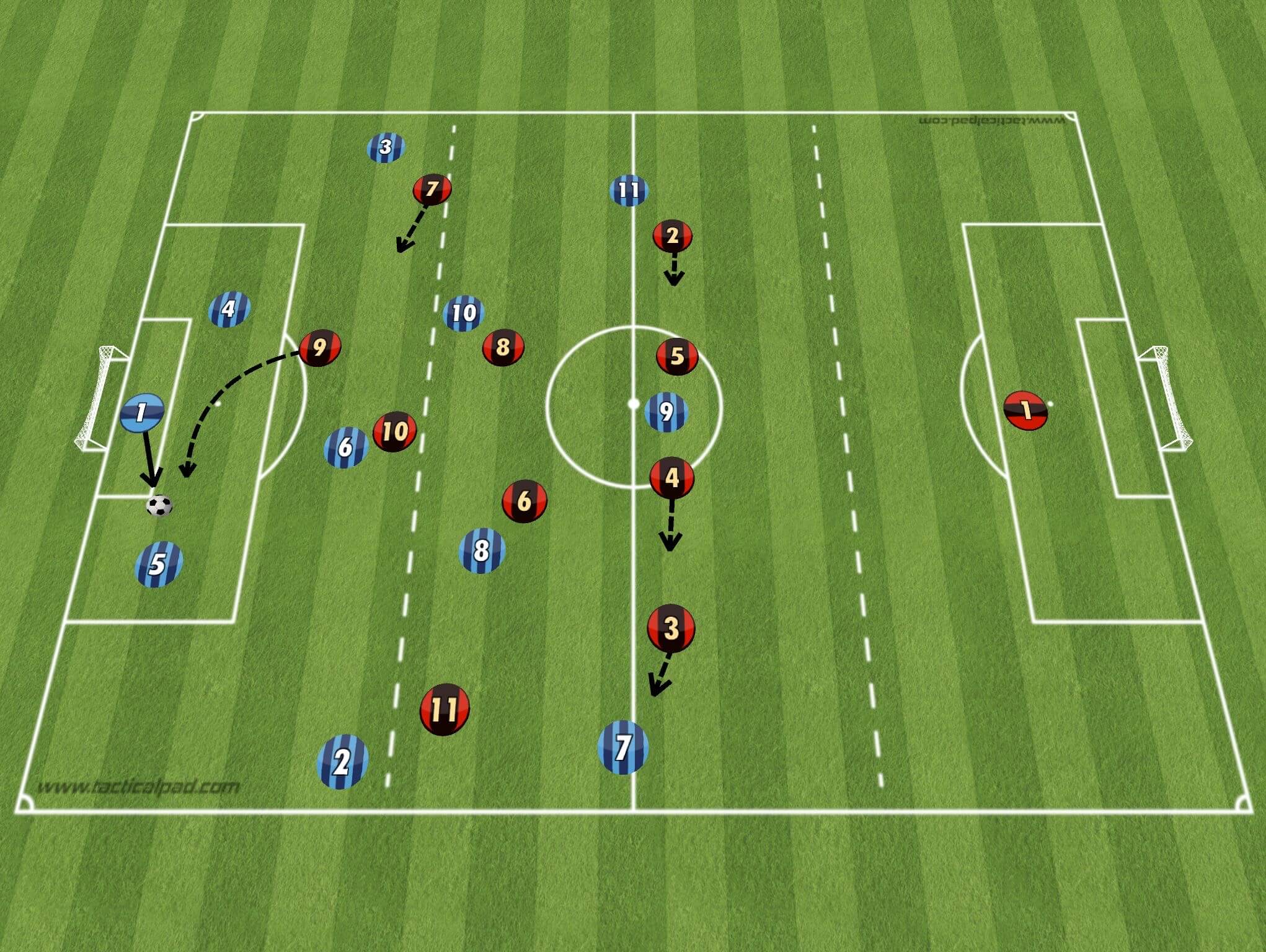 Forcing the opposition to play direct

In this scenario, your team may have a clear physical advantage dominating aerial challenges and winning the second ball. It can be a positive option to increase the number of long passes in this situation. In the below image the reds take a man-marking approach against the opposition. The striker and central-attacking-midfielder mark the centre-backs. The wingers take a position close to the full-backs and one of the centre-backs has the option of stepping into the central midfield area ahead of the defence. If the opposition is playing a 4-4-2 then the centre-back stays in the defensive line as we have 2v2 in midfield. However, if the opposition plays a 4-3-3 then the player may be required to close off the extra man in midfield to create a 3v3. If the centre-back steps into midfield the remaining three defenders take a compact central position and shift in relation to the ball position. The pressing team should be aware of the long ball into wide areas as this space may be open dependant on the opposition formation. 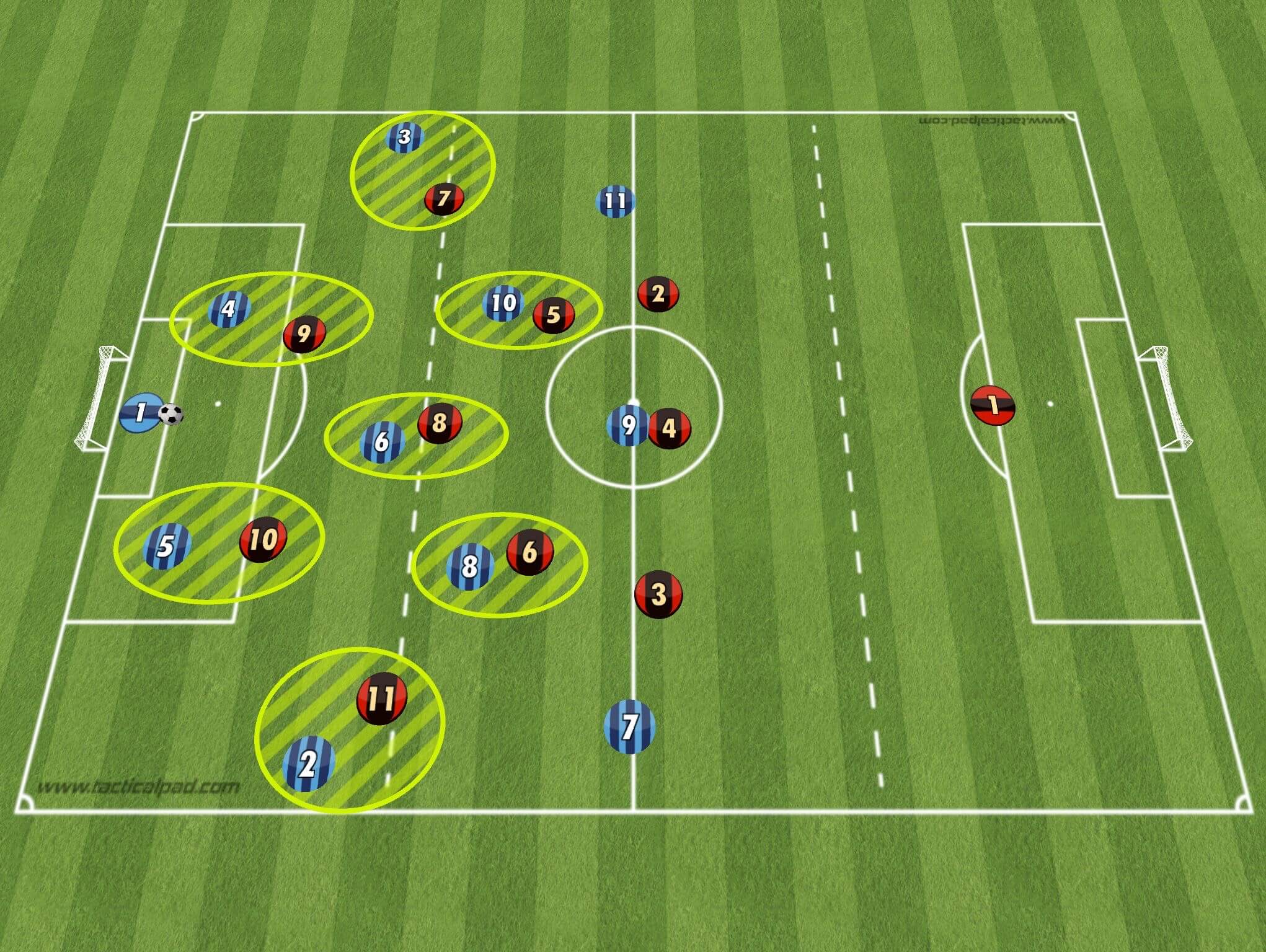 If we are successful in recovering possession, we then have an opportunity to quickly exploit the oppositions disorganisation with the objective of scoring. It is important to know the key principles of T2A along with the pressing principles to design an effective session.

Planning the organisation of the press is a key part of planning your T2A. The key players in the transition will be the striker, central-attacking-midfielder and wingers. The positioning of these players in your press will have an effect on your attacking opportunities when you recover possession. Therefore, it is advised to plan with the T2A in mind. An example below highlights in the press three out of these four players are fully engaged defensively in the press however the positioning of the winger opposite the ball side is balanced. This winger has come inside centrally to compact space defensively but in taking this position the player is also in a dangerous attacking position to receive a pass if the team recover possession. 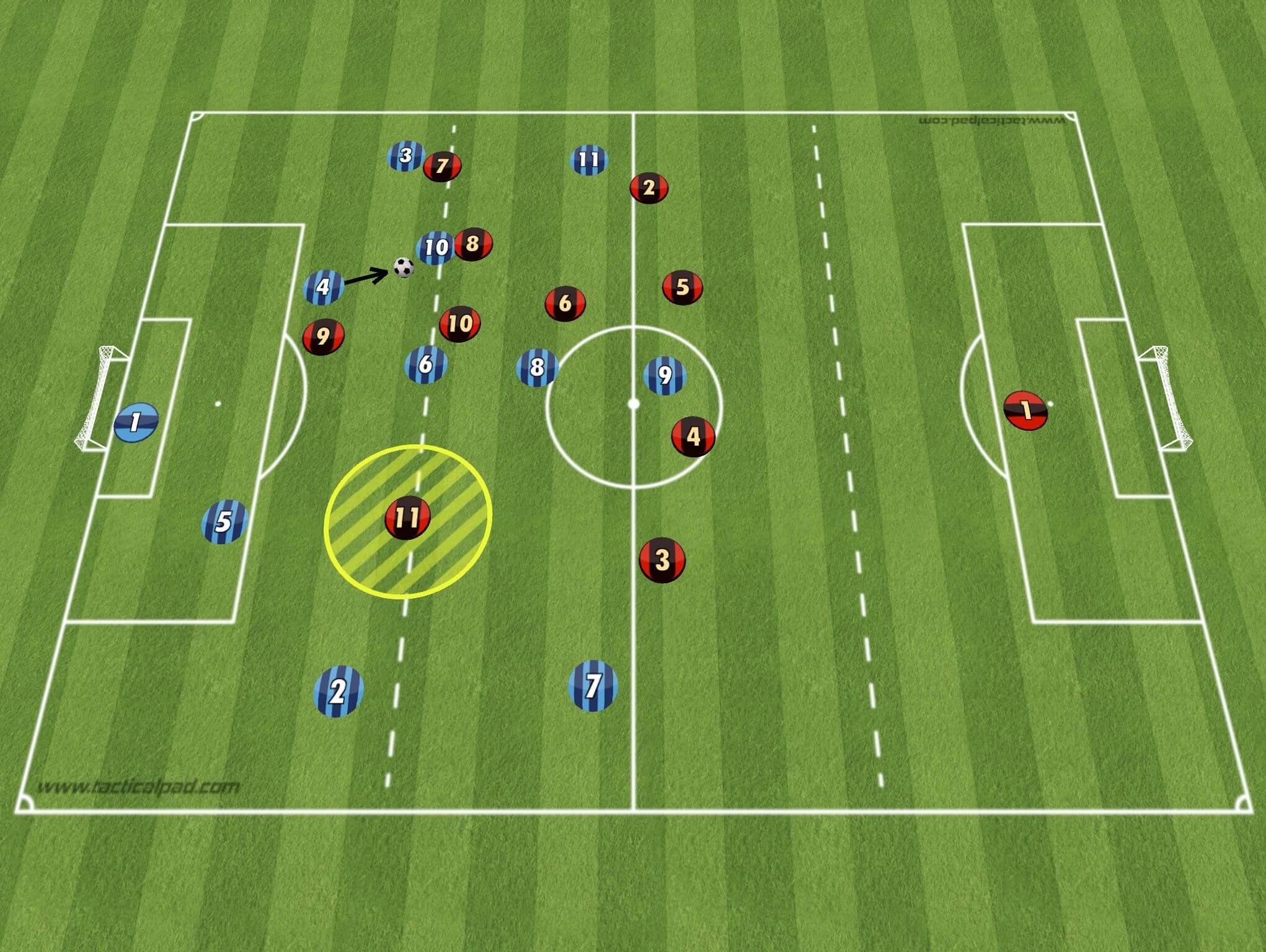 In the image below, the forward pass is not available as the opposition is implementing a counter-press. If this occurs, it is important that the team tries to protect the ball and control possession. The nearest players to the player in possession need to create passing options to receive the ball. The players further away such as the back four can drop off to create a distance in receiving the pass, in turn, increasing the difficulty for the opposition of performing the counter-press. 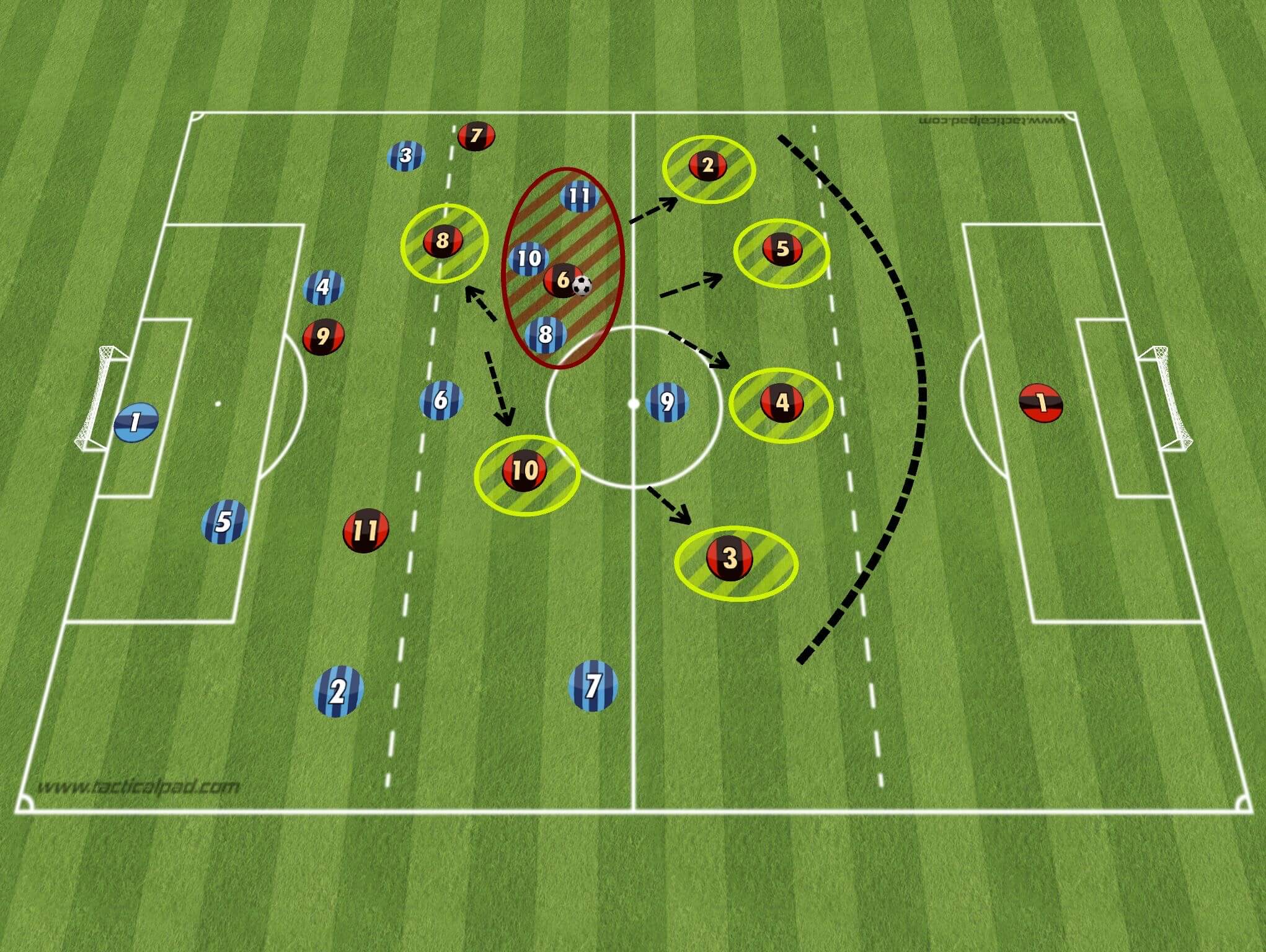 As seen above there are numerous ways to press and an example to learn more from at present is Manchester United’s 4-2-3-1. When defending they utilise the pace of the attacking players as a defensive asset with Martial, James, Rashford and Fernandes pressing defences with speed. They also have strong defensive midfielders with Fred being a key player in stopping the progression of the ball forward. Throughout the 2019/20 campaign, Fred has made an average of 5.7 interceptions and 8.94 recoveries per 90 minutes. Impressively, 41.3% of his recoveries were made in the opposition half. Understanding the strengths of your players is very important in designing a successful press and T2A.

When coaching a session, it is preferred for the theme of the session to start straight away from the warm-up. Below we will look at several ideas to help you create your session on pressing in a 4-2-3-1 with T2A.

We begin the warm-up with a mixture of dynamic movements, activation techniques and light technical ball work. After this, we play a simple game of 1v1’s as seen in the image below. The blue players inside the area attempt to dribble past the red defenders on the outside of the area and the winner keeps the status of an attacker. 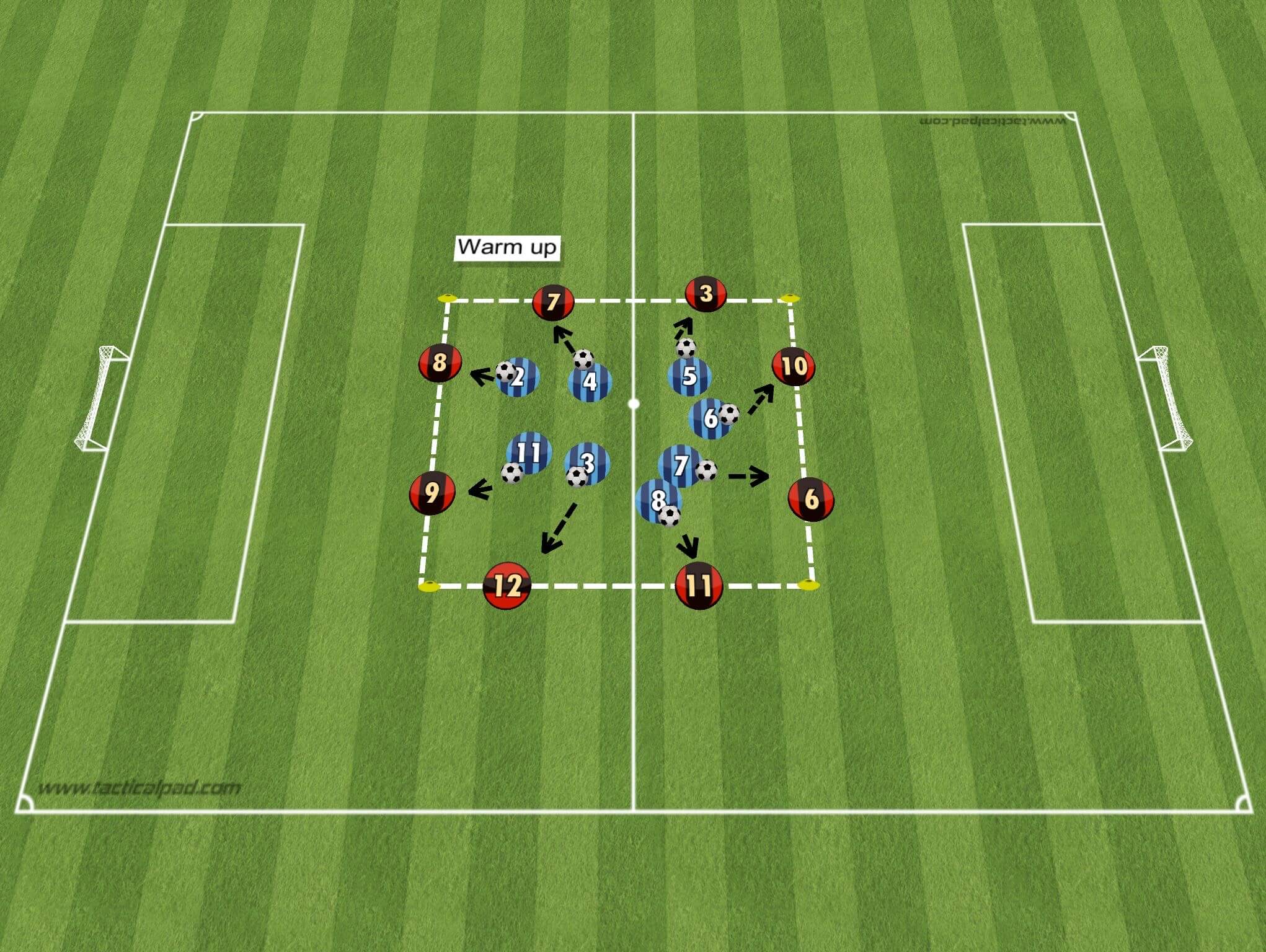 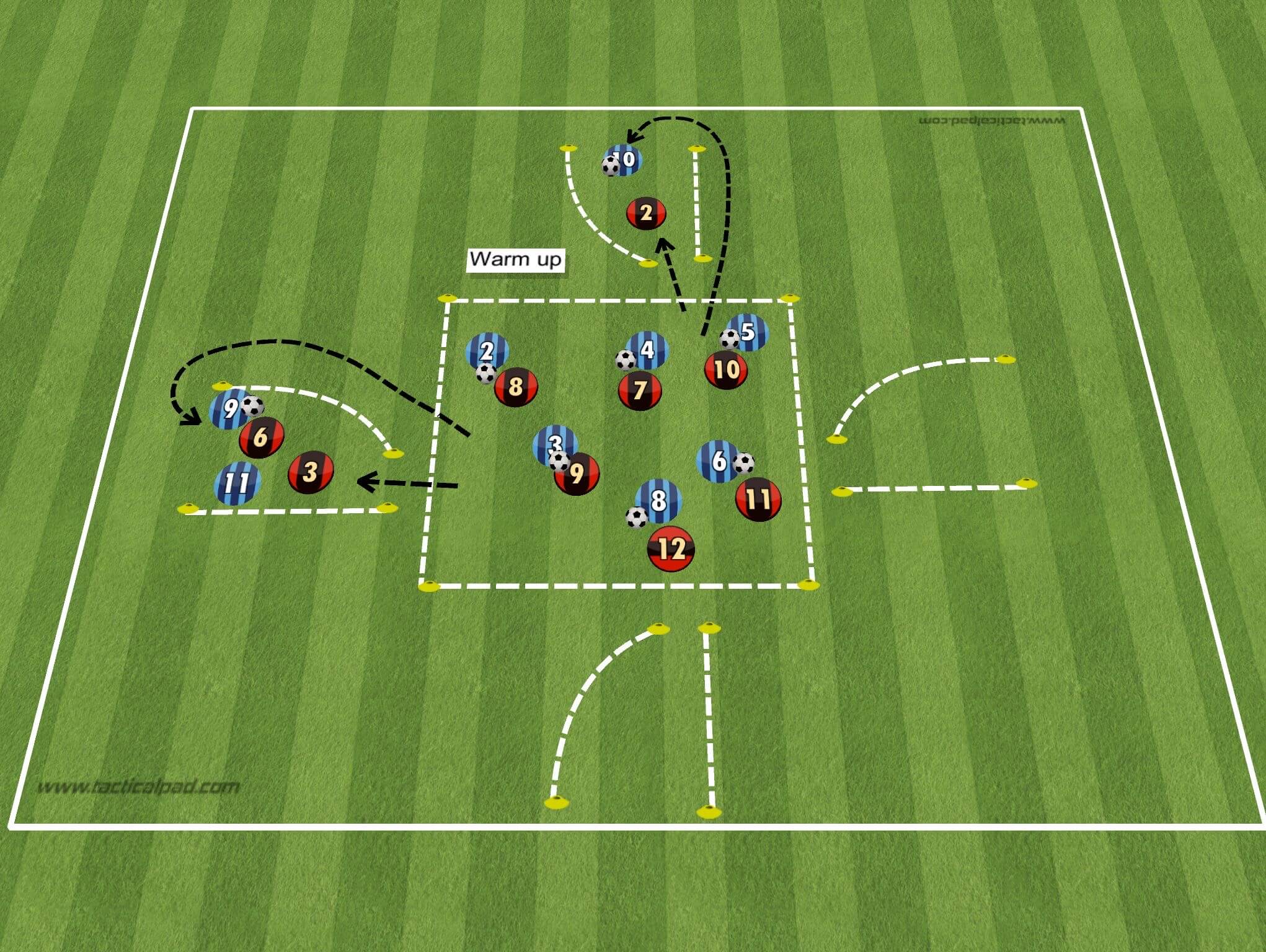 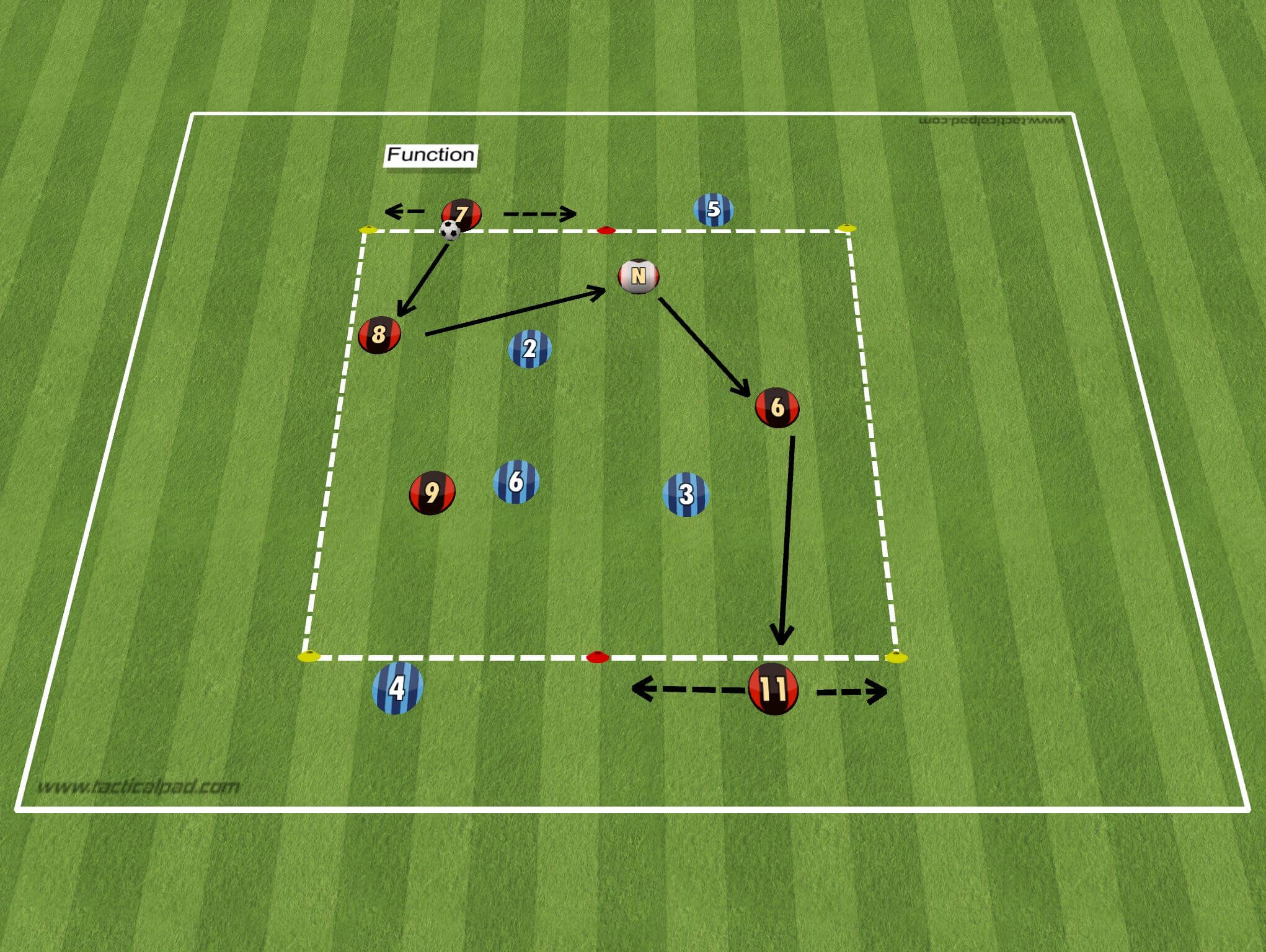 This function is progressed by adapting the shape allowing the target players to use half the end-line and part of one sideline to receive the ball. The increase in space for the target man creates a wider area for the defenders to screen. The players without the ball and the neutral can only play inside the central area. The players on the ball are allowed to drop into the space in front of their target man. However, if they drop into this area, they must rotate positions so that a different player from the team is now the target man. 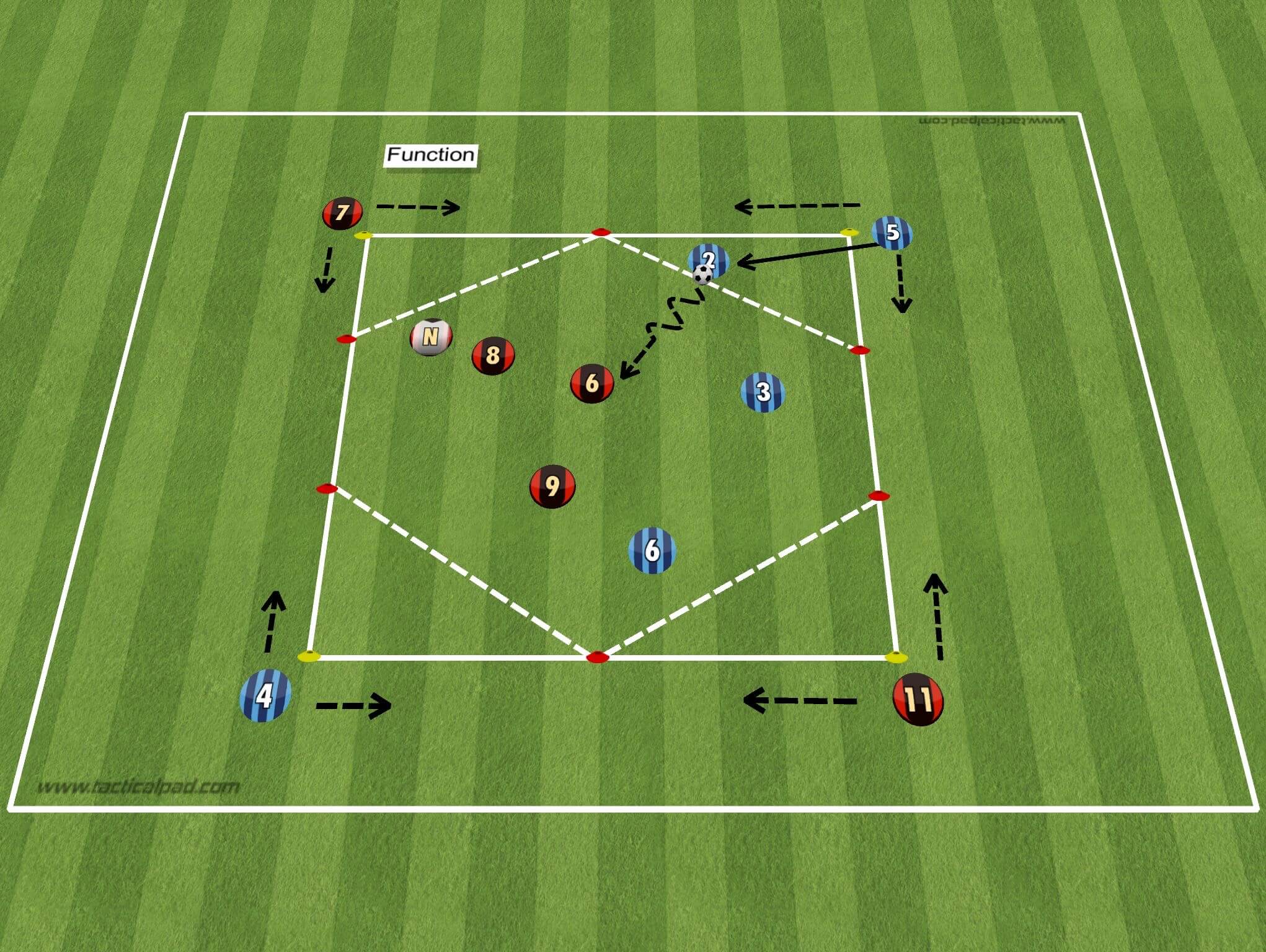 We now progress to a phase of play that focuses on coaching two units defending together starting with the midfield and attacking units. The reds defend from the front in a 2-3-1 shape. The blues play out in a 4-2-1 shape with the one a fixed target man in the highlighted area. Play starts initially from the goalie; the coach can restart play from anywhere in the defensive third. The blue team’s objective is to find the target man with a penetrating pass to score a point or dribble through the cones for half a point. The red team objective is to press high up the pitch in the style instructed by the coach to recover possession and T2A. Recovering possession and scoring a goal can be point-scoring opportunities defined by the coach for the red team. 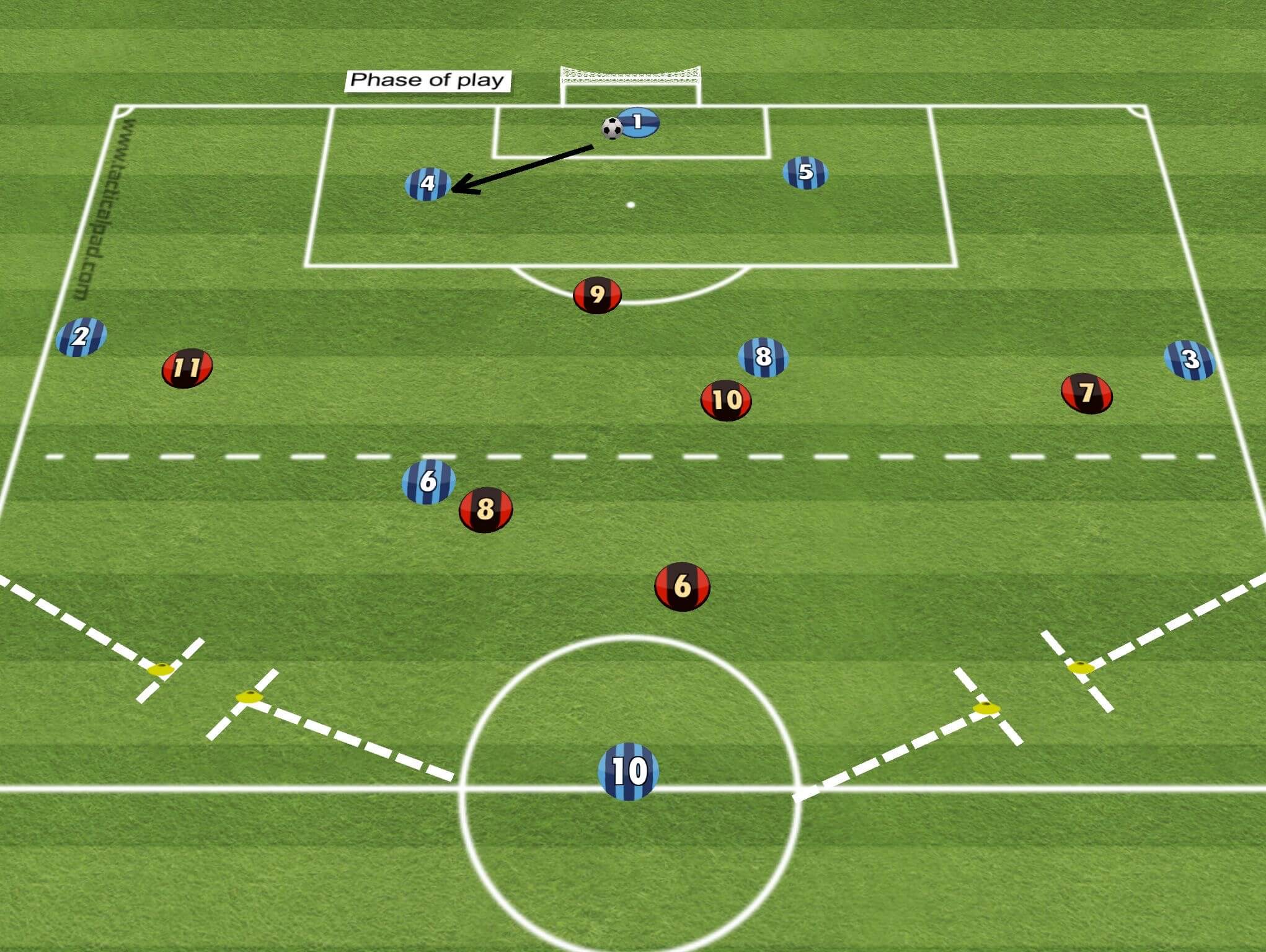 We now focus on the defence and midfield units in the middle third of the pitch. The reds defend in a 4-2-1 and the blues attack in a 2-4-1. A neutral player is included to increase the difficulty of the press, this player is with the team in possession and can only stay in the central grid. The blue team starts the play with the objective of dribbling or receiving a penetrating pass into the shaded area behind the defence. The red team presses the blue team to one side by compacting the space and screening the passing lanes forward. This reduces the blue team options forcing them to play one side. If the red team recover possession, they T2A with the same attacking objective now as the blue team and the blue team now transition to defend. 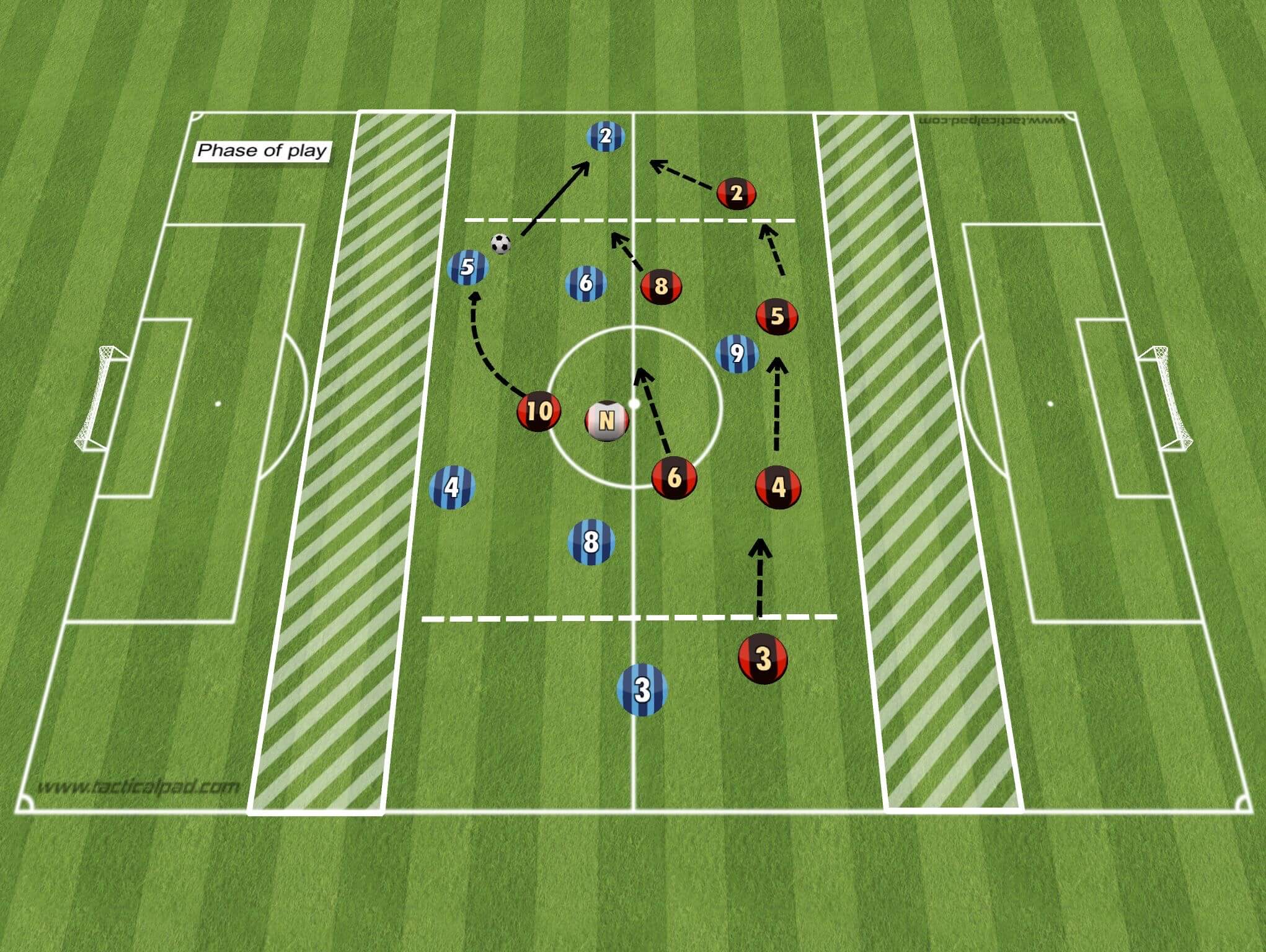 The next step is putting the learnings from the session into practice with a training game. Note a common early learning issue with teams pressing is that they leave large distances between the units. This allows the opposition to play out receiving the ball between the lines with ease. At the end of the game as the players are doing a cool down it is good practice to do a quick debrief. The debrief allows players to share what they learned and discuss within the group. 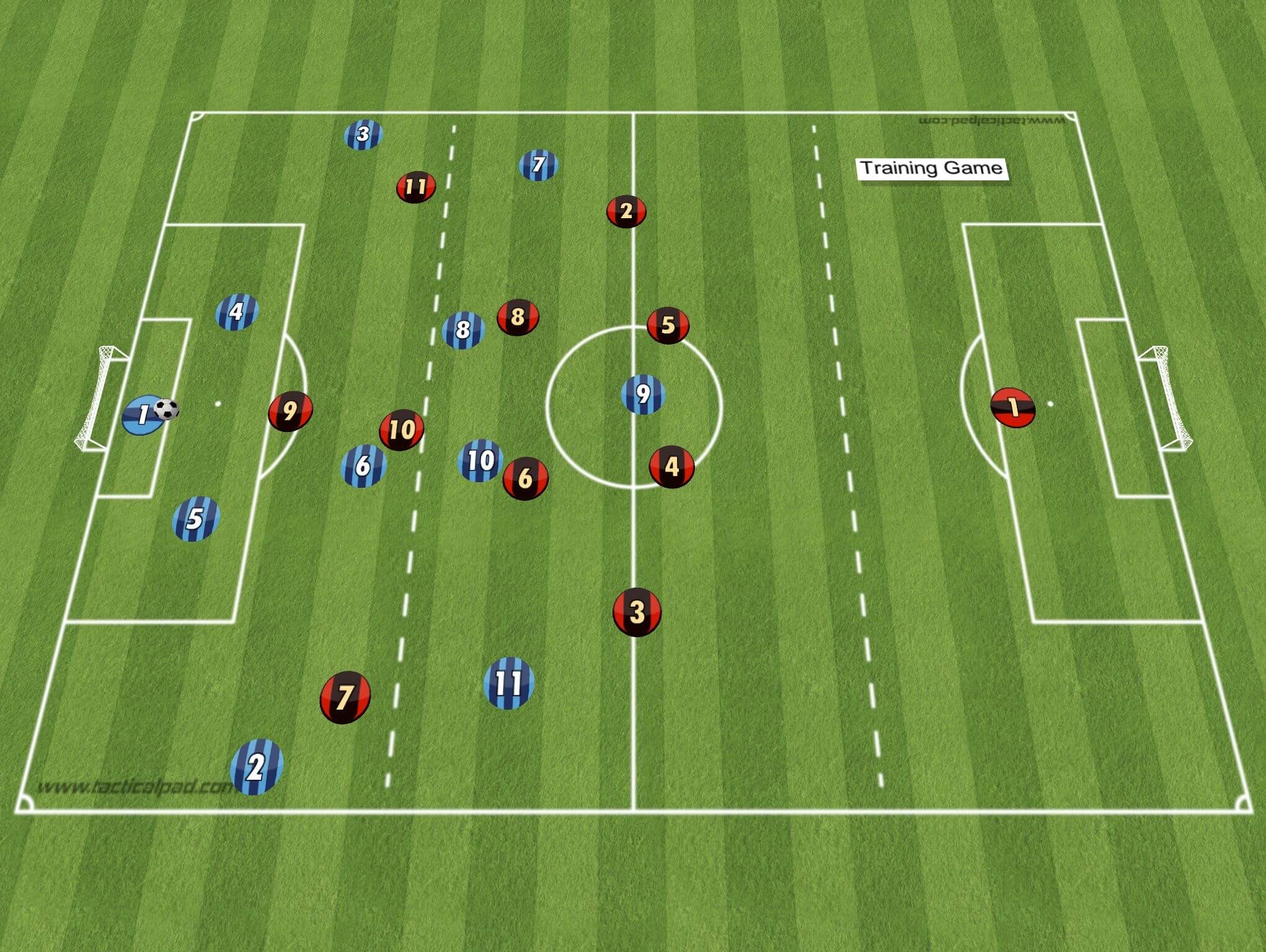 Pressing in a 4-2-3-1 with a T2A is a coaching topic that requires a significant amount of time on the training pitch to get consistent returns on match day. It is advised to coach the topic progressing from the individual to the unit to the team. When coaching the topic in a phase or a training game always work backwards starting from the front with the first pressing player typically the striker. Transitions are one of the most important parts of the modern game. When planning a coaching topic always think of ways to promote the importance of the transition in the session. With pressing it is important that a team is adaptable keeping in mind that the opposition at the elite level will look to find new ways to play out in-game. Knowing the key principles of pressing can allow a team to adapt its press if required whilst still having a clear understanding of the required actions by the team. 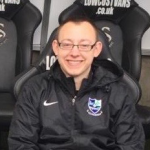 UEFA A License Coach, Football Analyst, and Supporter of the Beautiful Game.