Jürgen Klopp and Pep Guardiola are two of the best managers in world football at the moment, with both picking up major trophies this season. Yet both employ styles that contrast and contradict each other perfectly, leading to some of the best tactical battles in the world of football when their team’s play one another. In this tactical analysis, we will look at the features of these tactical battles and what makes them so interesting.

Pressing vs build up play

Jurgen Klopp’s pressing system is something which he has become well renowned for, and against Guardiola’s sides, it is a vital part of the game plan. Guardiola has always set up in a 4-3-3 against Klopp, where usually in deep build-up play, the full-backs push high and wide, while a central midfield player drops to form a back three. Klopp’s pressing system revolves around forcing the opposition into the centre, where they can then be pressed by the midfield. To do this, Klopp instructs his wingers to simultaneously press the central defender on the ball, while using their cover shadow to block the passing lane to the full-back. This effectively means this winger is pressing two players at once.

For example, below we can see Hoffman presses the central defender while David Alaba tries to move out of his cover shadow.

This leaves both teams in this kind of structure seen below. Reus covers the central area and is backed up by the midfield in a mid-block, meaning that Dortmund’s front three can press five players if their movements are effective. 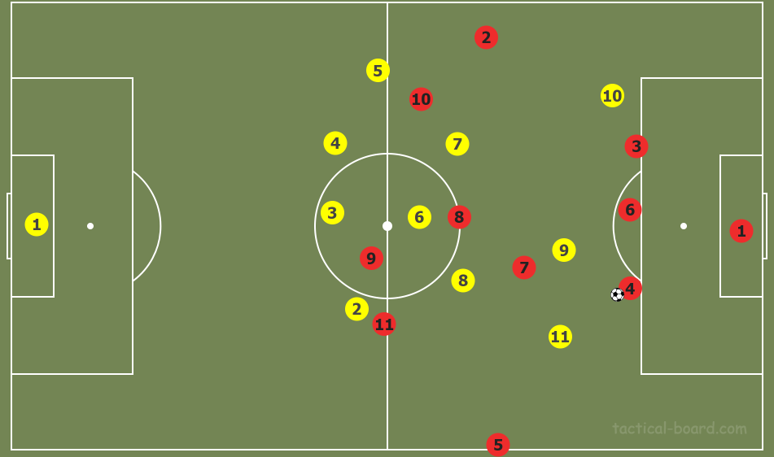 We can see this same situation below, with the passing lane to the wide full-back being cut off while Bayern form a three at the back thanks to the dropping Lahm.

If the opposition does manage to get the ball to the wide player, they are pressed aggressively by the full-back, while the central passing options are cut off. Of course, Dortmund would prefer to not have their full-back that high up the pitch, as the quick wingers of Guardiola’s team could find space in behind. 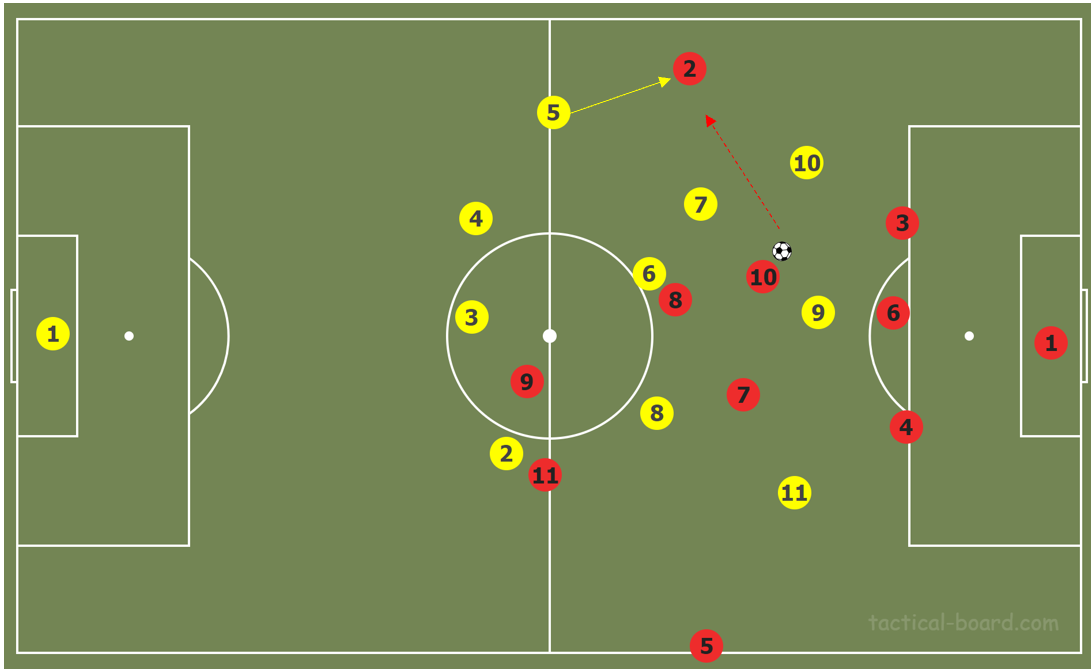 We can see below the full-back steps in to press, forcing a backwards pass to the goalkeeper and for the press to be reset, allowing Dortmund to get reorganised again.

Occasionally, Bayern would keep their full-backs inverted and allow their wingers, in this case Ribery, to drop into the wide area. The inverted full-back occupied a central space and therefore created space out wide for the winger, but because Bayern had committed another player back, it was less of a threat to Dortmund. The press from Aubameyang on Dante also helps to prevent the central pass, and the positioning of Hoffman so that he can affect either passing lane is excellent.

At Man City, Guardiola’s build-up structure changed slightly, but the principles remain the same. Fernandinho at City likes to drop behind the oppositions offensive line to receive the ball, and so City’s back three in build up usually consists of a full-back and the two central defenders, with the additional full-back high and wide. This keeps Guardiola’s asymmetrical full-backs but makes Fernandinho harder to press.

Therefore, when triggered, Liverpool must press higher in order to ensure Fernandinho isn’t granted as much space to start the build-up.

Below, Liverpool lay a pressing trap for City, with Fernandinho left open while the passing lane wide is blocked by Mané. Upon the pass being played, James Milner rushes to press Fernandinho, while Mané drops to get closer to the full-back. The press from Milner causes Fernandinho to misplace his pass, and Liverpool get the ball back high up the pitch.

With Klopp happy to allow Guardiola the possession he craves, Klopp looks to take advantage of areas of transition, something which he has done so successfully that Guardiola himself has labelled Klopp “the best offensive coach in the world.”

The key to any offensive transition is performing offensive actions quickly enough that the opposition does not have time to recover. Klopp clearly puts a lot of work into this on the training ground, as the decision making of his players in these moments is almost always flawless. But how does Klopp maximise the effect of these transitions?

Firstly, Klopp’s ideal personnel for these transitions is clear to see. Players, particularly wingers, must be quick in order to play in his sides, at Dortmund, it was Reus, Aubameyang or Lewandowski and Mkhitaryan, and at Liverpool it is now Firmino, Salah and Mané. Quite simply, faster players can drive into spaces quicker, and therefore, the opposition have less chance to recover and get players back.

Klopp’s high pressing system also means that should a transition occur high up the pitch, his team have more players in offensive areas to use.

In the past, Guardiola has suffered by his wide full-backs becoming too high and wide, so when the press previously explained is effective, Klopp’s front three has space to drive into. For example, here, after Dortmund recover the ball, Lewandowski receives the ball and looks to play a pass to either winger, who are in a race with the opposing full-back.

But the big feature of Klopp’s transitions is his team’s ability to bypass the midfield so quickly, and once the midfield is bypassed their quick, effective, decision making creates opportunities.

Lewandowski then links the play and creates situations like the one seen below. Dortmund here are able to quickly create an overload on the full-back, and so without any momentum being lost, are able to deliver a simple cross in and score. In transition, Guardiola has admitted that his wing-back is not able to track Klopp’s, as they are occupied by one of the front three, so the wing-backs also cause problems in transition, as Schmelzer does here and Robertson does so often at Liverpool.

We can see this same principle being deployed at Liverpool against Manchester City, where any central gap is exposed quickly due to the width of Man City’s offensive shape. Here below we see Salah combining with Firmino using a one-two pass and getting behind the midfield, where there is enough space behind the defence for Mané to exploit and get a shot on goal.

How Guardiola limits these transitions

Playing Klopp at his own game has been a system that has worked well for Guardiola, particularly in away games. This involves him somewhat abandoning his famous philosophy, in favour of allowing Klopp’s side to have the ball and therefore limiting transitions for Klopp’s side.

These games involved Guardiola’s side sitting behind the ball and relying on their own fast transitions and long balls to counter Klopp’s sides. Because Guardiola’s side was no longer relying on short passes to start attacks, Dortmund’s pressing was nullified and so after losing the ball after an unsuccessful attack through a long ball, Bayern are in this shape. This doesn’t allow Dortmund any space to use and therefore Klopp’s notoriously quick side is slowed down. When we compare this to previous images of Klopp’s teams breaking in transition, we can see which is more stable defensively.

In Manchester City’s 0-0 draw at Anfield last season, Guardiola opted to still build up from the back, but were happy to concede possession and get players behind the ball quickly should a turnover take place. Both sides had 50% possession in the game, and City’s biggest threat came in transition, where they were awarded a penalty and were unlucky not to win the game.

For example, below we can see a situation where Man City have just lost the ball from their build up from the goalkeeper. There is an initial counter press from City, with three players looking to stop the counter-attack at its source, while Fernandinho sits rigidly in front of the defence and looks to stop Firmino from linking up play. Mendy also remained tight on Salah, which leaves City in their asymmetrical full-back shape, with Walker dragged wider to the side with the ball.

We can see below again another example of Mendy getting tight to Salah, something which many sides do to try and nullify him. This can be successful against him, but the full-back must be strong and quick, as if Salah does get a pass away, they will have to make a recovery run in order to prevent Salah from getting through. Mendy did struggle with Salah at times, and I’m sure next season Liverpool will target the left-back area for transitions. Fernandinho is also slightly out of position in this situation, but the movement of Firmino makes him difficult to stay tight to all the time. By Mendy getting tight to Salah, he slows Liverpool’s attack down and allows Fernandinho to get back into position.

Fernandinho was City’s key player in this game, barely putting a foot wrong throughout the game. When he needed to sit to stop counters he was there, but also when he needed to step forward and quickly counter press, he was able to do this.

Guardiola gave Javi Martínez a very similar role to Fernandinho against Dortmund, but with Dortmund’s transitions usually starting from the deeper positioned Nuri Şahin, Martínez played as an advanced defensive midfielder, sometimes known as an “anti-10”.

We can see below Martínez is positioned in the number 10 role, which forces Şahin to stay close to him. Therefore, should a transition occur, and Dortmund win the ball, Martínez should be close enough to Şahin to either dispossess or foul him, hence stopping the counter-attack.

Guardiola also seems to have learnt his lessons regarding the positioning of his full-backs against Klopp’s sides. If we compare the two images below, we can see Guardiola’s change to a more conservative approach. In the first image below, Bayern are left exposed in transition due to both full-backs being caught high and wide.

Now, Guardiola’s full-backs tend to attack one at a time, in an asymmetrical shape as mentioned. We can see an example of this helping in transition below, where Laporte remains narrow while Walker has attacked down the right, therefore he is in a much better position in order to assist the defence.

Overall, Klopp has the better record against Guardiola according to statistics, with Guardiola’s system being exactly what Klopp wants the opposition to do (if done badly). In the coming battles I would expect Guardiola to adapt his system away from home again, as City really should have won the game, as when Liverpool’s space was restricted, they struggled. I have no doubt that we will see more tactical adjustments from both sides this season, but the same principles will remain. It is now a question of both teams not becoming overly obsessed with each other and forgetting what their own strengths are, while still nullifying each other’s threats.