As one of the founding members of the MLS, FC Dallas has played a vital role in the growth of the league and its academies. Already having one of the best run academies in the league, the North Texas side also benefits from one of the biggest talent pools in the United States. Players such as new Juventus recruit Weston McKennie started off in the FC Dallas academy. The academy not only produced a wealth of quality players but also their current head coach Luchi Gonzalez.

Having a former academy director and coach at the helm has benefitted the Homegrown players massively. During Gonzalez’s tenure in Dallas, they have signed an MLS record 30 homegrown players to first-team contracts. One of these players is 19-year-old right-back, Bryan Reynolds.

Reynolds has taken over at right-back since the departure of fellow Academy product Reggie Cannon. Having made 12 appearances and starting nine times, Bryan Reynolds is establishing himself as a reliable option on the right side of the defence. This tactical analysis will give a detailed look at what makes Reynolds so reliable for FC Dallas.

Whether Dallas is lining up in a 4-2-3-1 or a 4-3-3, Reynolds can be found on the right side of the defence. As a modern full-back, the Fort Worth native is very active along his side. Since he is incredibly athletic, Luchi Gonzalez is able to utilize Reynolds’ pace going forwards. 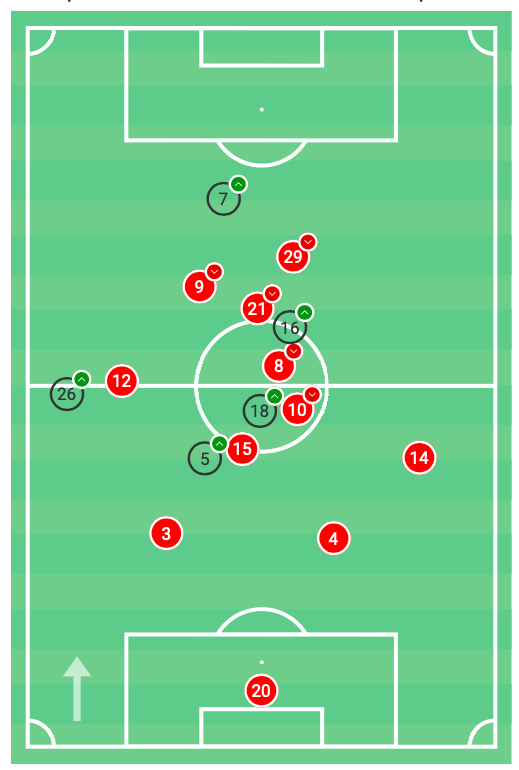 Using an analysis of average positions from the FC Dallas against Sporting KC, we can see an example of Reynolds’ (14) positioning. The example above shows FC Dallas’ attacking tactics and how they give the width to the outside backs. Due to the nature of Luchi Gonzalez’s playing style, the outside backs have attacking and defensive duties. Using Reynolds’ heat map as a reference, we can see how much ground the right-back must cover on a weekly basis. 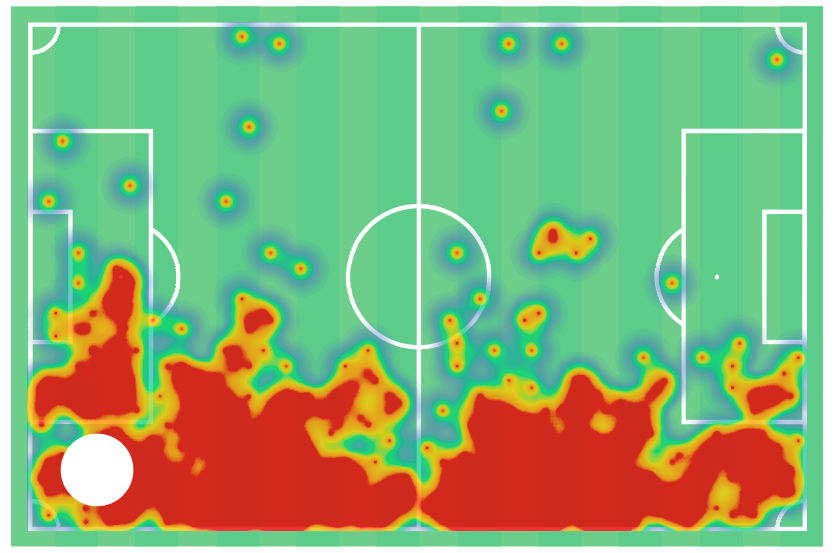 In the following sections of the scout report, we will analyze Reynolds’ qualities in each phase of the game.

As most outside backs in the modern game, Bryan Reynolds is a key component in the buildup and creation in the final third. The Fort Worth youngster averages 3.6 dribbles a game, which places him in the top 20 among his peers. While his 35.87 passes per game and 80% accuracy is quite a solid number, it’s essentially the numbers the rest of the outside backs are making.  Below we can see exactly where he stacks up against the rest of the right-backs in the league.

Reynolds’ strength in distribution lies in his crossing ability. His average of 3.5 crosses a game is among the top 30 in the league. Of his 17 successful crosses, 14 of those have been on the ground. In the crossing analysis below, we can see the variety of his service into the penalty area. 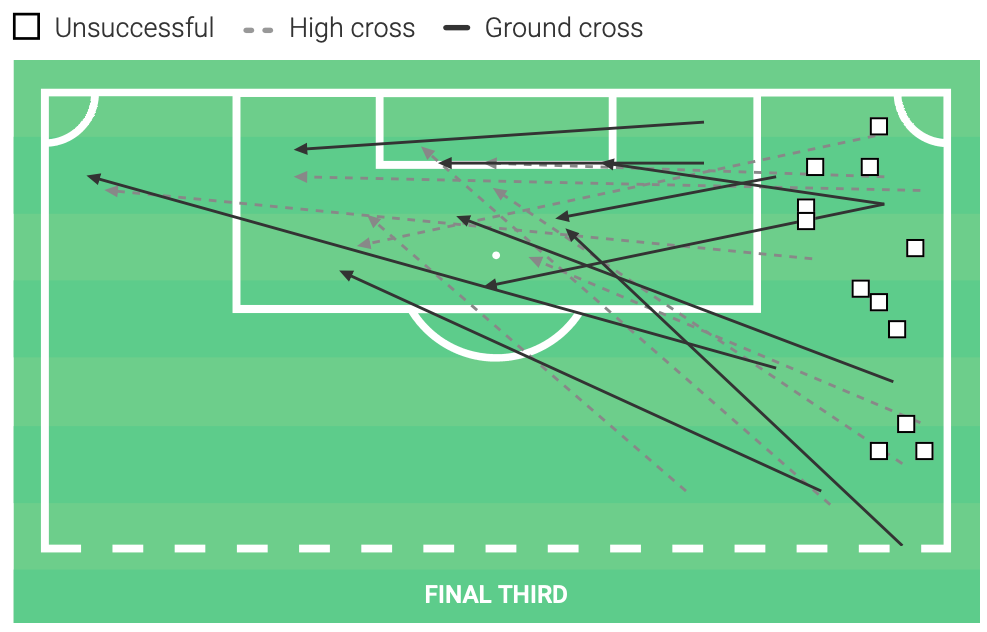 During the attacking phase, Reynolds is often tasked with creating overloads in the wide areas. This typically is done utilizing rotations in the channel or half-space with right-winger Michael Barrios. Using an example from their recent victory against Sporting KC, we see this tactic in action. 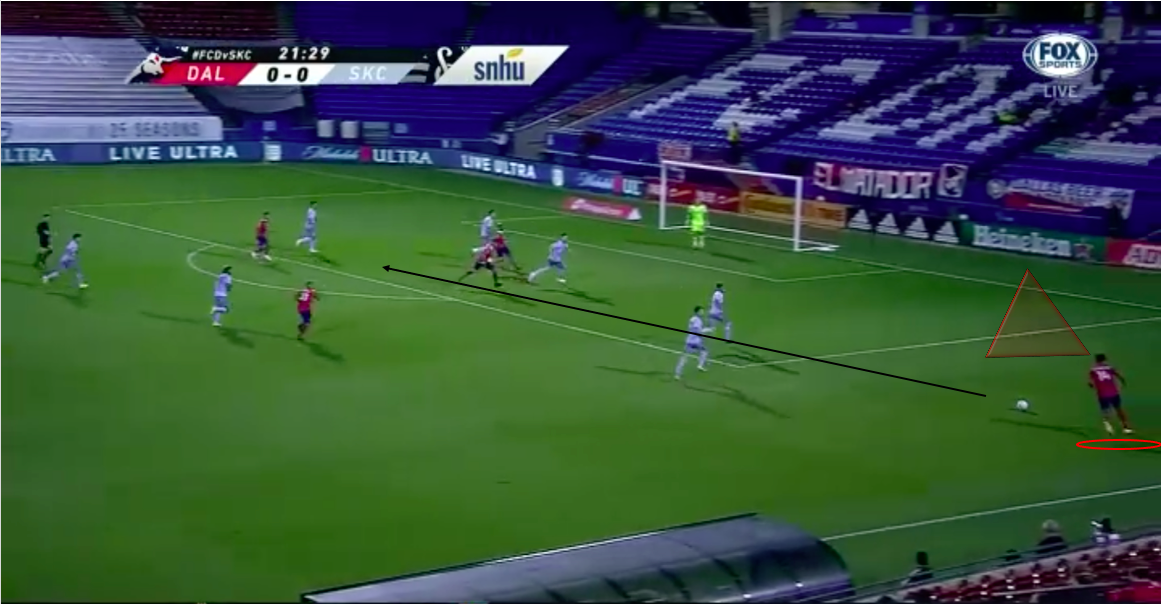 After receiving a through pass from the midfield, Reynolds is shaping up to cross the ball first time. As he begins to wind up, his head is up surveying his options in the box. He recognizes the nearest options are heavily marked, so he is able to cross the ball along the ground to the back-post option.

In another example from a match against Houston Dynamo, Reynolds has just received the ball from Picault. Due to the right winger’s positioning on the touchline, Reynolds makes his run in the half-space. This action draws defenders to the ball carrier, thus creating space for his teammate in the half-space. 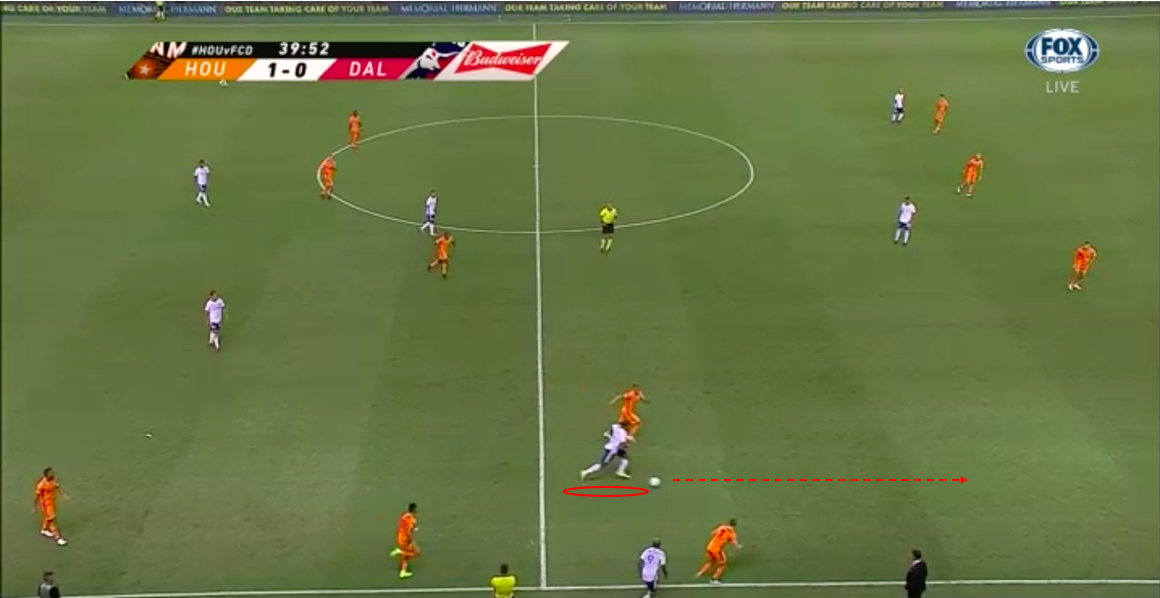 Using his electric pace, Reynolds is able to burst past the defenders to create a 3v3 in the final third. He then tries to pick out Michael Barrios, who is on the far side, with a curling ground cross. Although he is not able to connect the cross, Dallas is able to maintain the pressure with the ensuing corner kick. 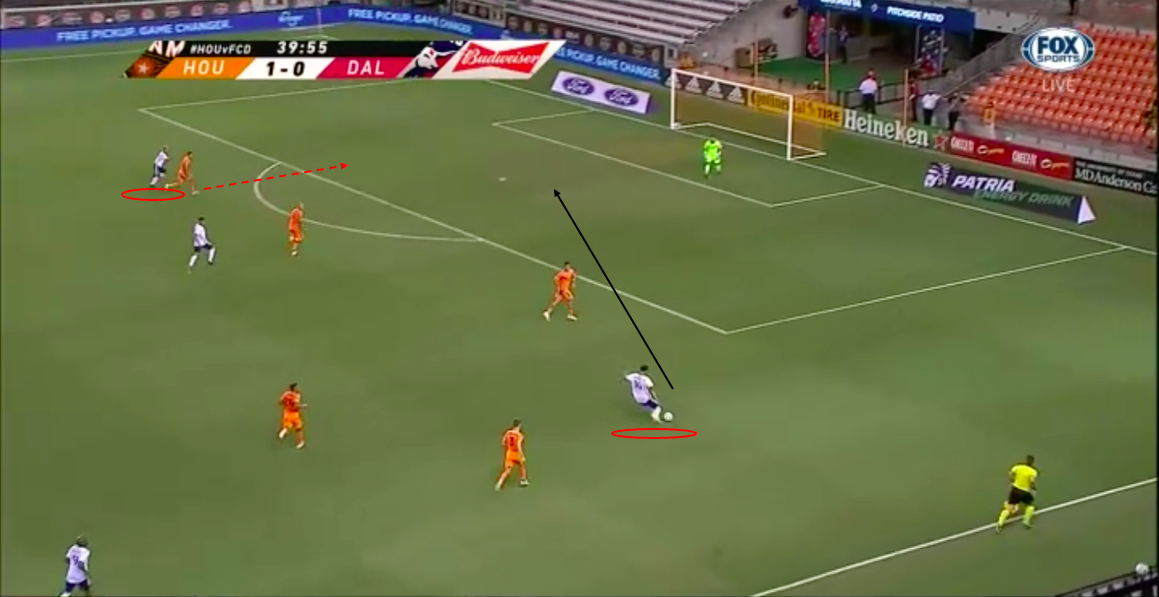 Reynolds is also a solid defender for his age. The Texas native averages 9.27 defensive duels per match, winning 57% of these duels. Below we can see exactly where this lands the young right-back among his peers. The right-backs in this scatter plot have played at least 700 minutes this season. While he does have a relatively high rate of defensive duels, he is just short of the average of duels won. 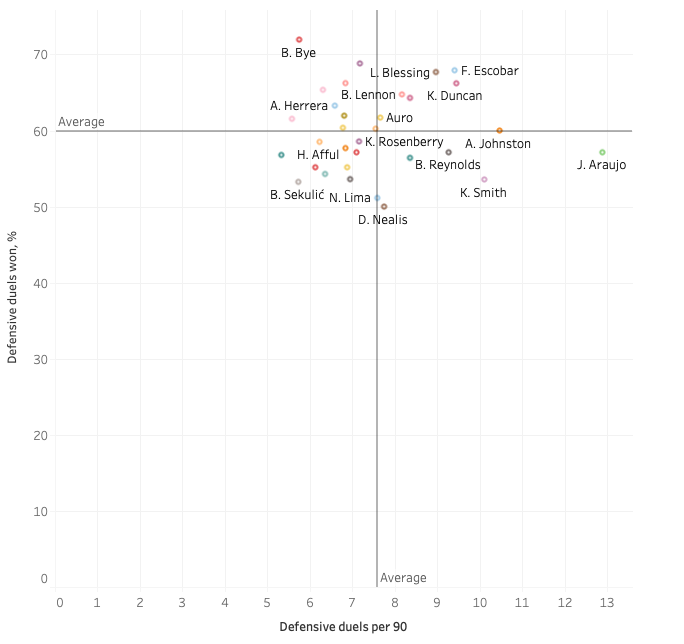 Taking a closer look at this metric within the defensive third, we can see Reynolds’ discipline. His 31 duels won were impressively done without any slide tackles or interceptions. Clearly, the majority of these duels were on the right side, but he has also chipped in seven times in the penalty area and in Zone 14. 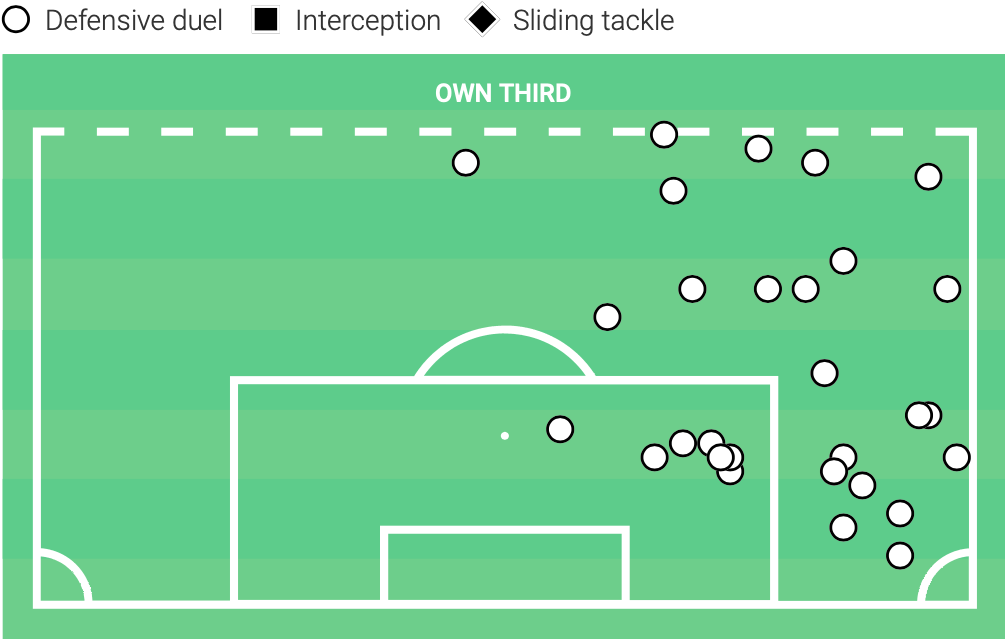 Analyzing a sequence from the draw against Columbus, we can see Reynolds’ defensive discipline. As the ball is on its way to the Crew’s midfielder, the right-back is also making his way to the attacker. Arriving on the opposition player’s first touch, Reynolds does not allow the attacker to turn. 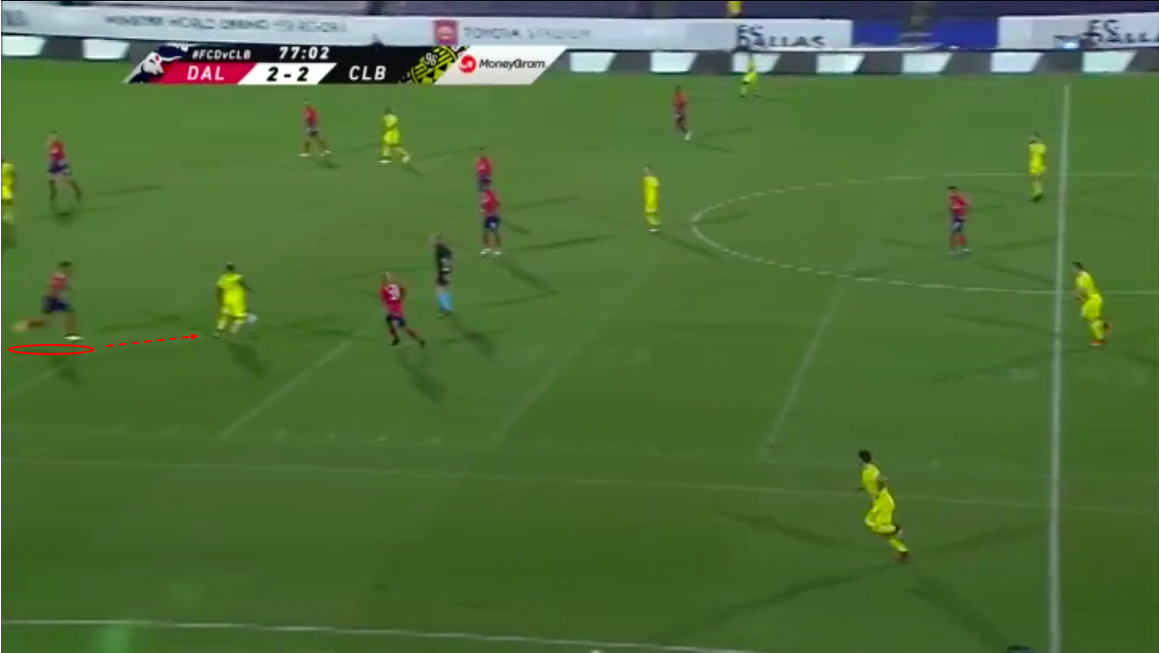 Using his physicality, he forces the ball carrier backwards until he plays the ball back. While this is happening, the rest of Reynolds’ teammates find their defensive shape. Once the ball goes back to a Columbus centre back, Dallas is then able to force play wide. 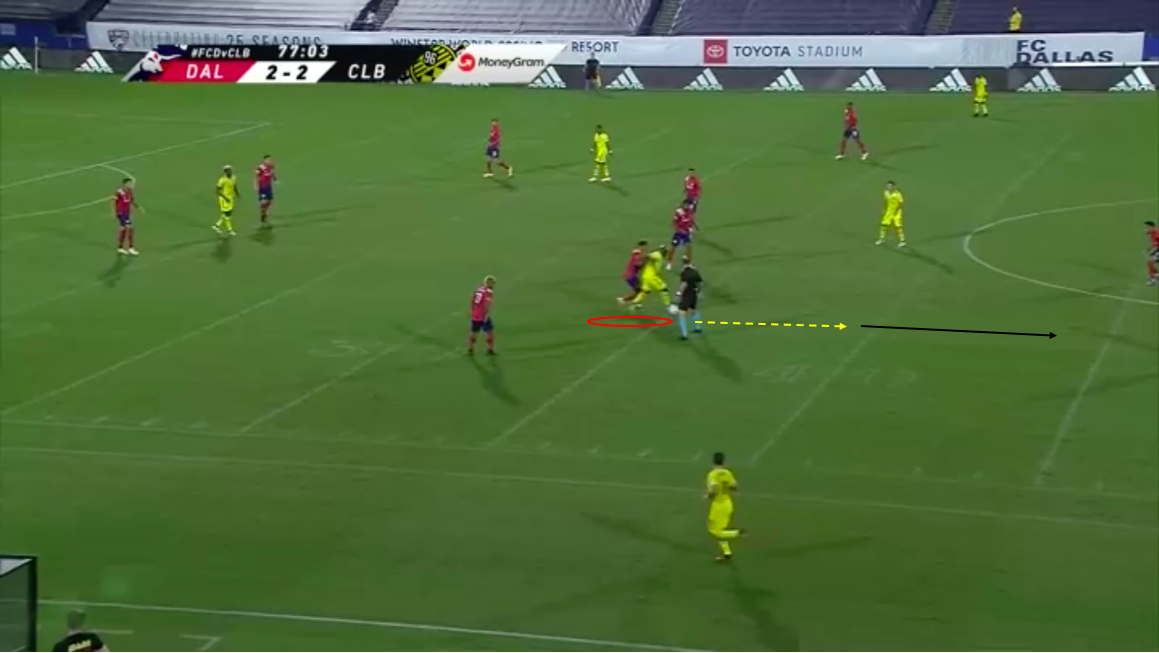 The flipside of this is how many duels he has lost in the defensive third. Reynolds has almost as many duels lost as his wins. Averaging 2.37 duels lost, with 1.14 dangerous losses per match. This stat will clearly diminish as he continues to improve his defensive skill set.

The final aspect of Reynolds’ game that we will analyze is transitions. One of FC Dallas’ tactics is to counter-press and the youngster plays a vital role in these actions. Reynolds has registered 81 recoveries, with 37 coming in the form of counter-pressing. Below we see exactly where the young right-back is among his peers in the league.

Using an analysis of Reynolds’ recoveries for reference, we can see how the Texas native operates throughout the thirds. Beginning with 34 recoveries in the defensive third, his numbers get lower as he gets closer to the final third. 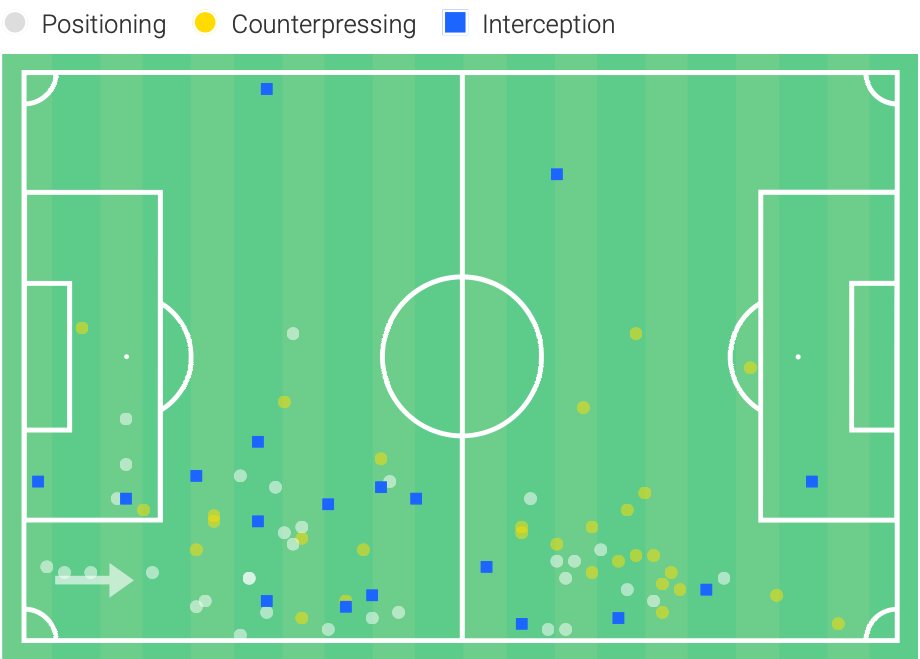 Transitions also count as when one loses the ball. In this instance, Reynolds averages 9.37 losses per match. This number is inflated due to the right-back’s role in the attacking phase. Recording 39 losses in the final third, this is almost double his losses in the defensive third. Using an analysis of his losses as a reference, we can see Reynolds is able to take more risks going forwards. The result of taking higher risks is losing the ball. 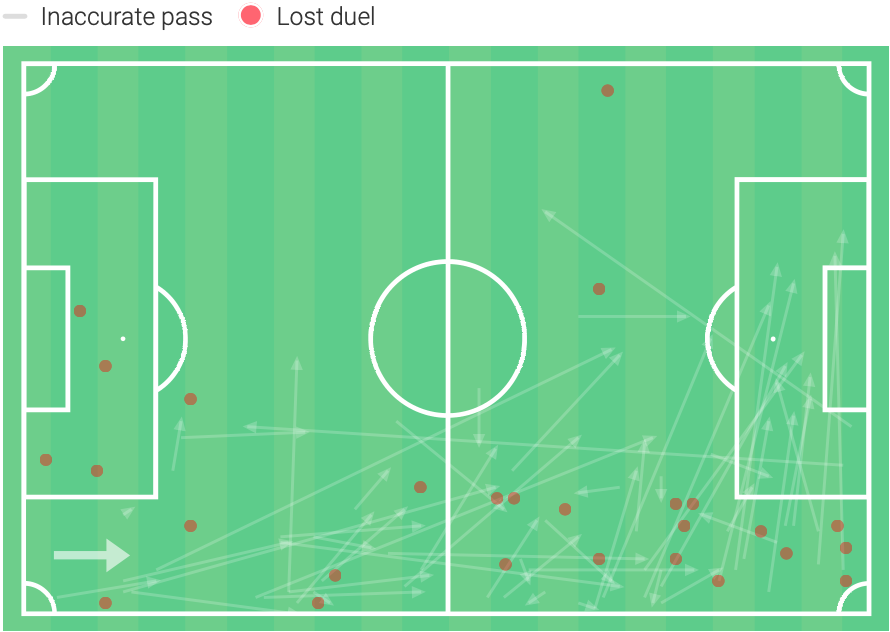 Although his career is just getting started, Reynolds has had a promising start at FC Dallas. Having continued where Reggie Cannon left off has benefitted FC Dallas and Luchi Gonzalez. While Barcelona’s Sergino Dest seems to hold the right-back position for the USMNT at the moment, Reynolds could easily give him competition for it. Combining athleticism and match intelligence, Bryan Reynolds is another young American to keep an eye on.