After the departure of Niko Kovac at the end of the 2017/18 season, Adi Hütter arrived having to outdo a coach who left lifting the DFB Pokal in his final game in charge. However, the Austrian manager had a fantastic debut season last campaign, finishing four points off automatic qualification for the Champions League and narrowly losing in the semi-finals of the Europa League to eventual winners Chelsea on penalties.

A lot of that success was down to a sensational attacking quartet of Sebastian Haller, Luka Jović, Ante Rebić and Filip Kostić. Unfortunately for die Adler, the former three players all left the club following their exceptional seasons leaving Frankfurt with limited firepower for the 2019/20 season.

In addition to that, Frankfurt were unable to bring in many fresh new faces, despite bringing in a total of £91m from outgoings in the transfer window. The likes of Kevin Trapp, Martin Hinteregger, Sebastian Rode and Kostić, who were all important cogs in the side, were at the club on loan and had to be bought outright. This left space for a couple of minor signings and meant that Frankfurt would not be able to replicate the form they showcased in the past two campaigns due to their star players leaving.

Having been one of the most exciting teams in the league last year with an exciting brand of football, Frankfurt have struggled despite maintaining a lot of the tactical nuances that made them successful. This tactical analysis will take a look at how Frankfurt have set up this season and its strengths and weaknesses.

At the time of writing, Eintracht Frankfurt are languishing in the bottom half of the Bundesliga table in 12th place. However, it is important to look beyond that and to consider what the underlying statistics can tell us about Hütter and the style in which his team plays in.

Under the Austrian manager, Frankfurt have a clear playing style as they play at a high tempo and like to press very high to regain possession quickly. They have a direct style of play and like to build up vertically with quick forward passes. This one of the main reasons as to why Frankfurt have the joint third-lowest successful pass percentage in open play in the league, with only completing 78% of their passes.

Frankfurt have been unable to replicate their form from last season mostly due to their poor defensive performances. They have conceded 41 goals in 24 compared to the 48 last season, however, a closer look at the numbers tells you that die Adler have been unfortunate. Understat has Frankfurt’s xGA at 34.1, seven less than the amount they have conceded, and thus, have their xPTS at 37.1 which would put them seventh in the league.

In the attacking phase, Frankfurt continue to play direct and most of their attacks come from crosses into the box. Only Bayern Munich have had more crosses than Frankfurt this season. Hütter’s side also rank fourth in the league in shots per game with 15 and have the seventh most xG in the league suggesting that despite losing three of their star attackers, Frankfurt’s attacking system has still been a strong point for them.

Now, we will take a closer look at the tactical concepts that Hütter has utilised this campaign.

Frankfurt have mainly used a variant of a three-man defence this year but have also implemented a 4-2-3-1 in the latter part of the campaign. Therefore, there might be some differences in how they build up from the back in the attacking phase. However, they have a distinct shape and system that help to progress the play.

The wingbacks, or fullbacks depending on the system, will tend to move relatively high and wide in the early part of the build-up phase. This provides width but also forces the opposition to defend in a wider block to cover this threat. This, in turn, creates space centrally that Frankfurt can exploit in order to progress the ball.

The central defenders split quite wide to offer wide passing options as fullbacks would do. and Frankfurt usually build up in two different ways. The first is when one of the two central midfielders or a defensive midfielder will drop deeper to give a passing option to the man in possession. The use of a midfielder in this scenario is so that it provides a passing option beyond the first line of pressure from the opposition. 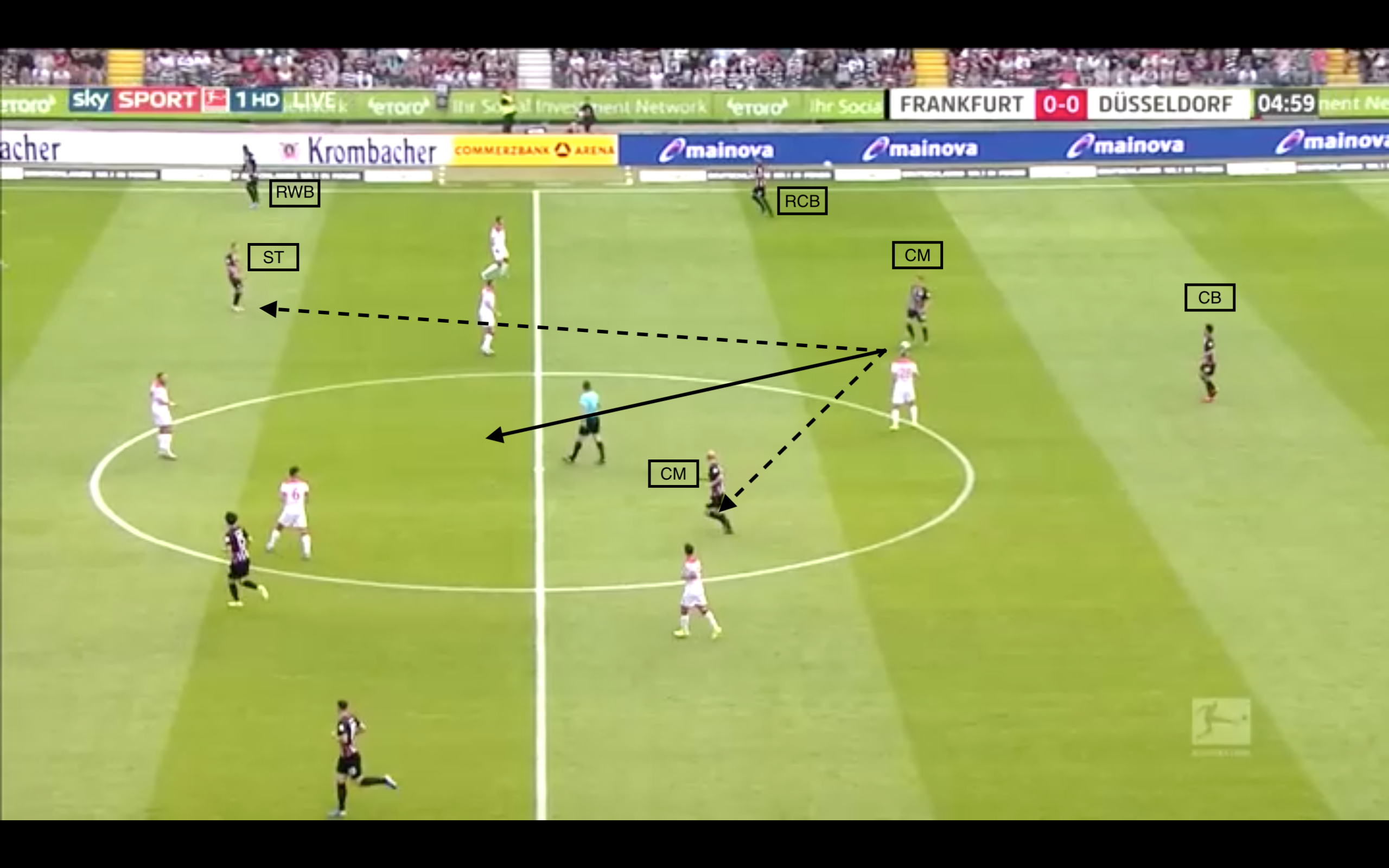 The example above is a great encapsulation of how Frankfurt build up when a midfielder drops deep. The right central defender moves far right to be able to link up with either the right wing-back or the striker who has found space in between the lines. The central midfielder has the option to either play a vertical pass into the striker or into his partnering central midfielder. In this example, he chooses to drive into space and play a difficult ball into a forward who is unable to collect the pass.

Another way that Frankfurt build-up is that the central defender who has possession, plays long balls into the channel for the attackers. With Frankfurt having strikers such as Bas Dost and Gonçalo Paciência, they are able to either hold the ball up or play quick passes with their teammates who are making runs beside them. 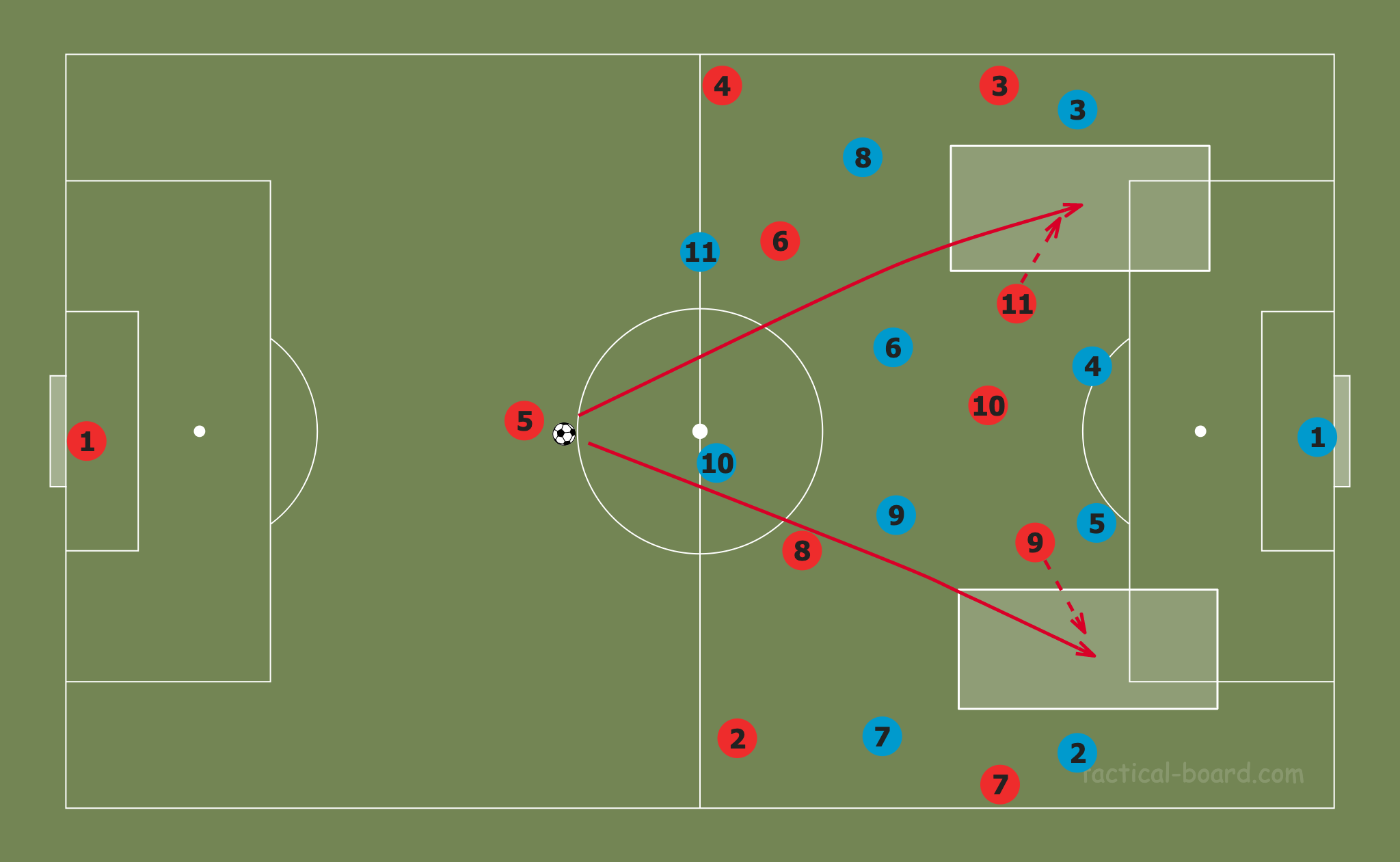 These variations in Frankfurt’s build-up phase help give Frankfurt verticality. This means that they can penetrate the opposition rather than play along the backline from side to side, which is much easier to defend.

Hütter’s side play similarly to RB Leipzig, which comes as no surprise given that the Austrian started his career with RB Salzburg and the Red Bull franchise have a distinct style of play that incorporates a high pressing system. The Bundesliga has a lot of teams that love to press aggressively but even then, Frankfurt have the sixth-best PPDA in the league with a value of 10.32. This means that Hütter’s side only allow just over ten passes per defensive actions, which is highly impressive. 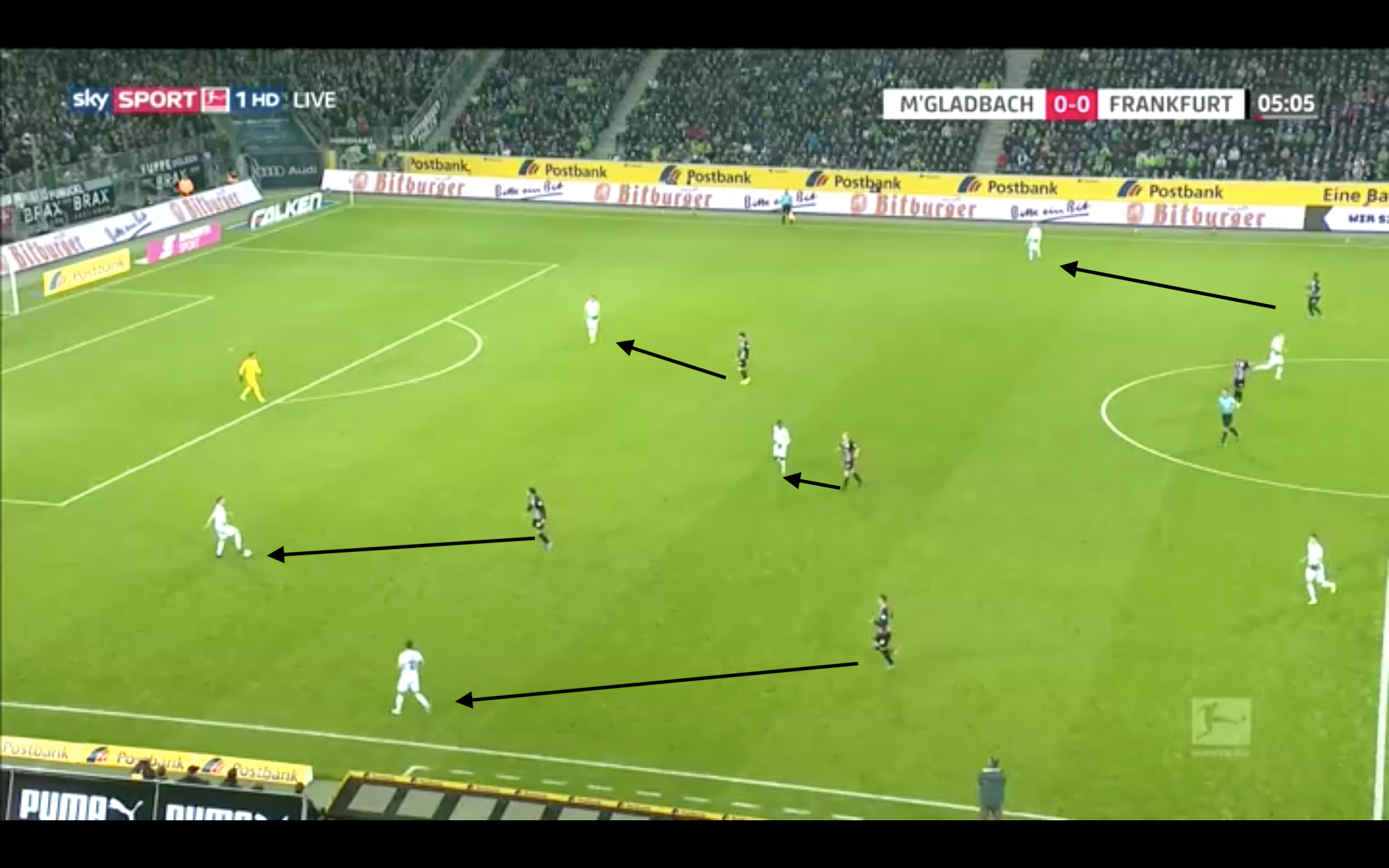 To beat the press, you can either play intricate passes and rotate with speed or play direct balls to bypass the press. However, in these situations, Frankfurt force the opposition to play long balls as they are good at being able to close each man down and reduce the space for the opponents to play in. This works well for Frankfurt given that they are a side that are dominant in the air as evidenced by the fact that they win nearly 20 aerial duels per game – the third-best in the league. Therefore, when the opposition play long balls, die Adler are able to win the aerial duel or the second ball and recycle possession. 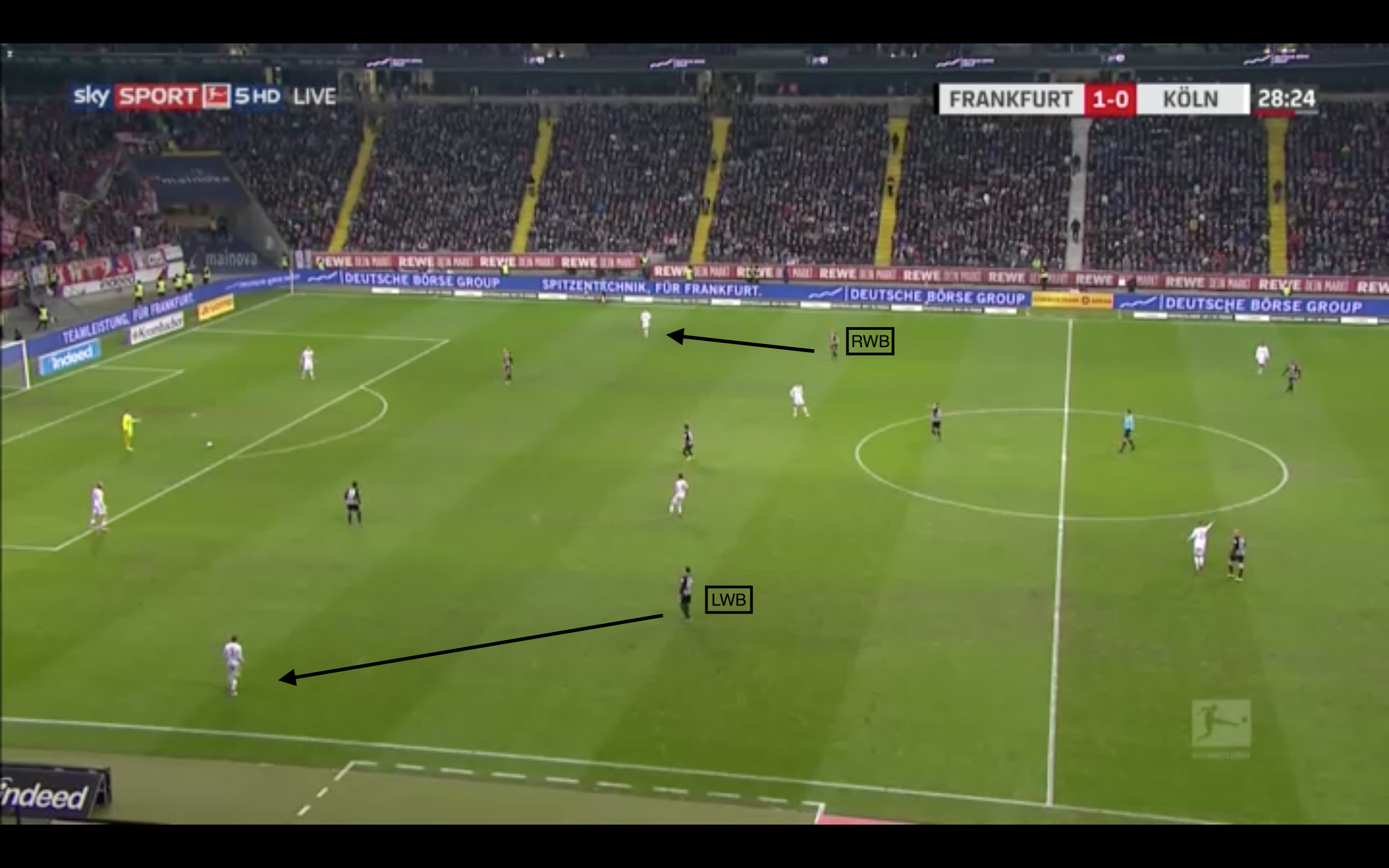 A staple of Frankfurt’s press is how high their wing-backs are as shown in the picture above. Usually when losing possession, most highly positioned wing-backs would drop back into a defensive shape, yet Frankfurt’s wing-backs instinctually push up to press the ball. This leaves space in the wide areas in defence which then is covered well by the central defenders who are well versed in defending 1vs1 situations in those areas.

As mentioned previously, Frankfurt are a team that love to pump crosses into the box and has been one of the main factors as to why they are in the top four in the league for shots per game and shots inside the penalty box. Again, the wing-backs’ positioning plays an important part in this. Hütter has them placed in areas of space in high positions at the same time as it allows Frankfurt to stretch the opposition’s defence. 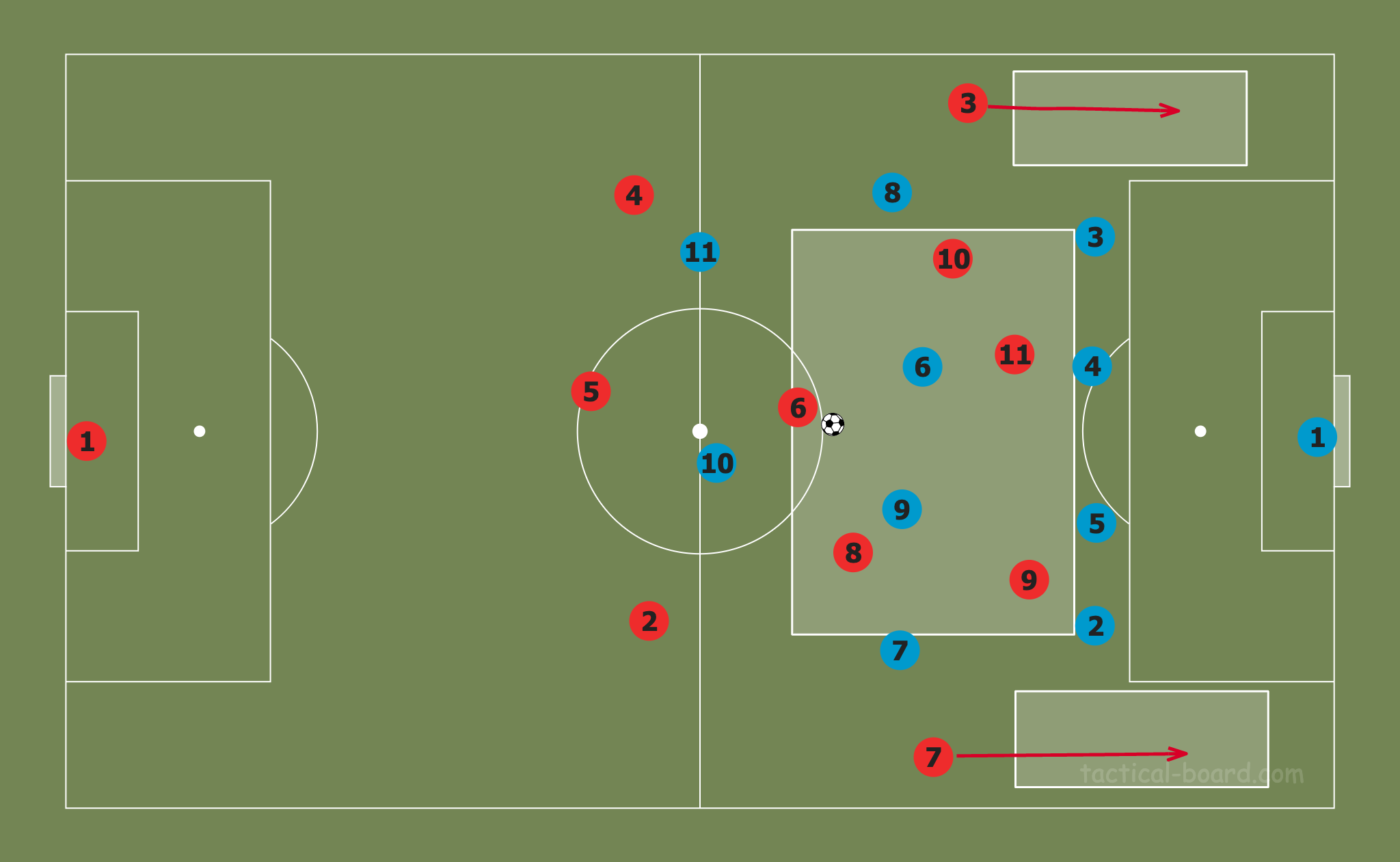 The image above showcases one of the main ways in which Frankfurt utilise their wing-backs in the attacking phase. The midfielders play quick short passes between each other to draw pressure from the opposition and focus into the centre of the pitch. Once this has happened, long direct passes will be played into the wing-backs who are high and wide. With the opposition keying in on the middle of the pitch either wing-back will have a lot of space to deliver crosses or play in midfielders making a run.

Frankfurt’s third goal against Bayern Munich puts Hütter’s instructions in play, which can be seen below. Danny da Costa, the right wing-back, is left wide open after Frankfurt shift the ball quickly to the right-hand side. The opponent is too slow to close him down and thus, gives da Costa ample time to find a teammate in the box. Frankfurt have three players running into the box and take advantage of the numerical mismatch. This leaves an open man in David Abraham who finds space and is able to convert the cross to score. 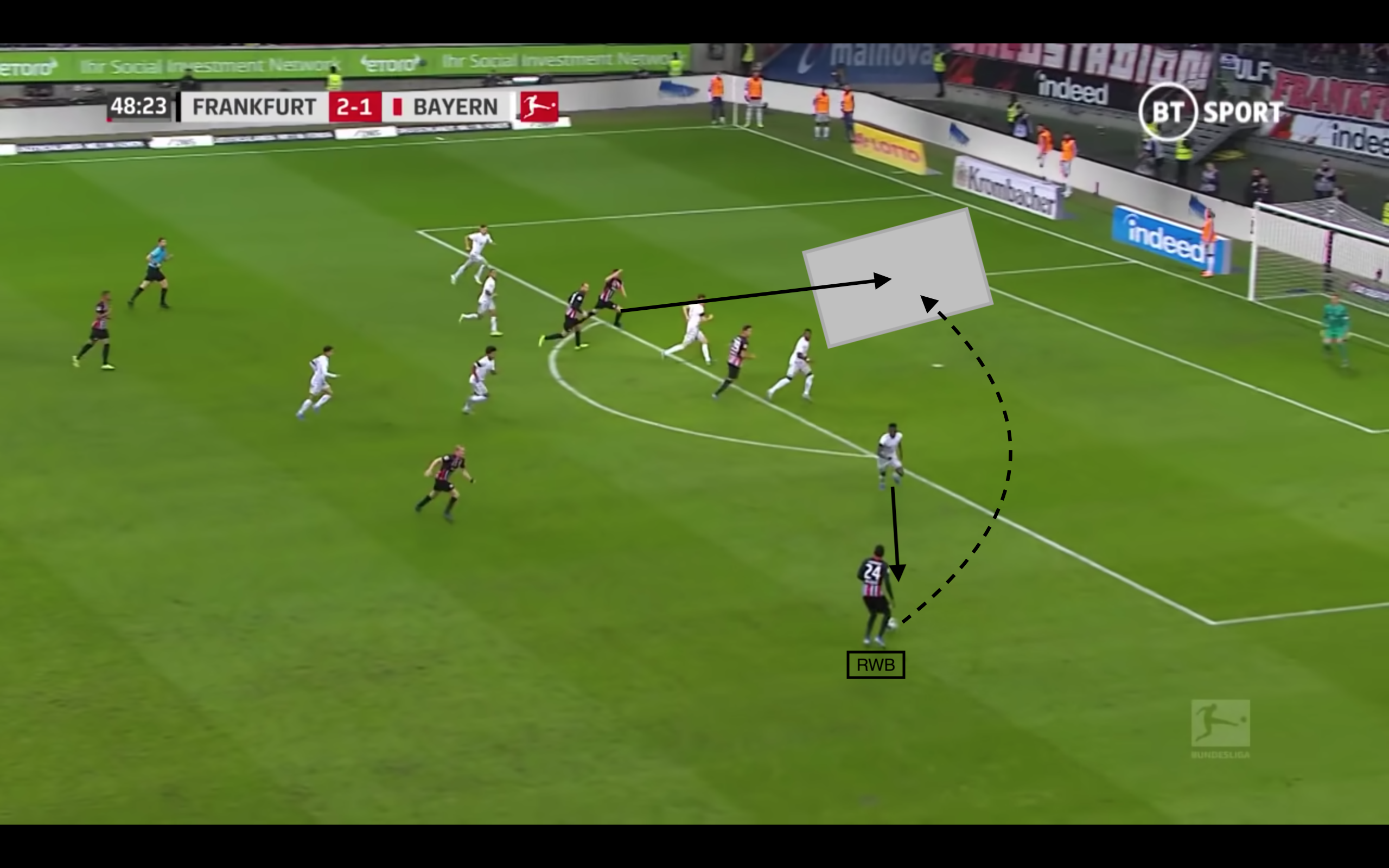 Frankfurt’s structure in defence has been their biggest issue throughout the season. The advantages of having wing-backs so high have already been discussed but it does cause some problems on the defensive end. There is ample space left by the wing-backs when they attack, which is exploited by the opposition wide players and thus, forces the whole of Frankfurt’s defence to be stretched. 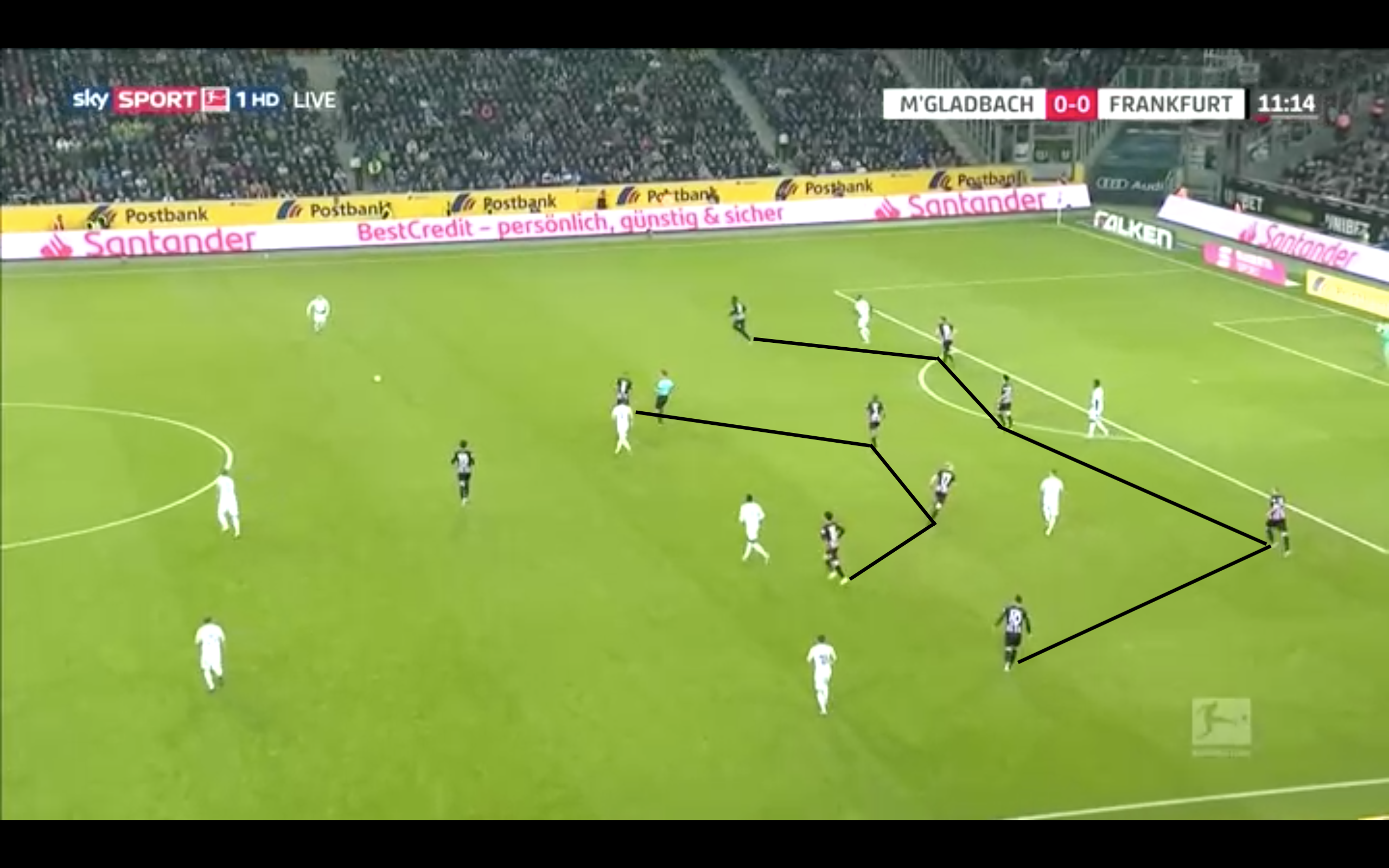 The image above shows how Hütter’s team like to defend in a low block. They normally drop into a 5-4-1 when defending to constrain the central spaces and prevent opposition overloads in the wide spaces. However, in transition, it becomes difficult to revert to this shape after their aggressive press is beaten and the opposition breaks or when the wing-backs push up to press the wide-man in possession.

Therefore, the left wing-back, Filip Kostić, remains very high up the field since he is an attacker by trade and thus, Frankfurt usually revert to a four-man defence. The right wing-back, Danny da Costa, acts more like a full-back, which adds a little bit more solidity.

However, as seen in the image below, Frankfurt’s press is beaten and are very susceptible to the counter-attack. The distance between the defenders in the backline is too big and Borussia Mönchengladbach are able to take full advantage. They use the up, back and through concept and penetrate Frankfurt’s defence vertically and allow their pacey frontmen to do the rest and finish the move off with a simple goal. 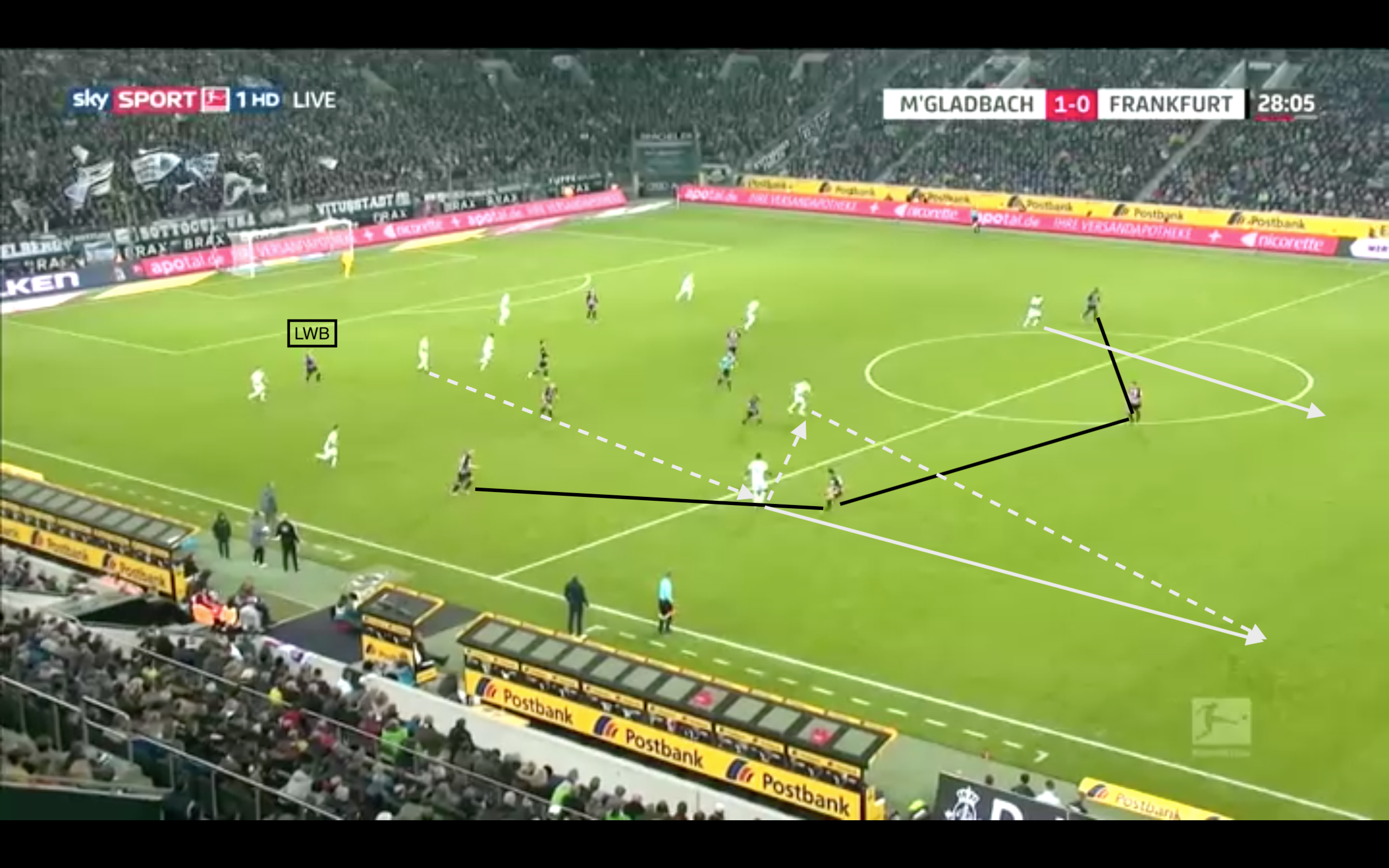 This analysis shows that the tactics favoured by Adi Hütter this campaign has not changed a lot from the previous season despite the sale of their star players and has been relatively successful when analysing it deeper. The concepts within the game model are well executed by players who are well coached but still require tweaks, especially defensively, if they want to be a definite contender for European football.

In principle, it is a system that can be hugely successful as seen in the case of RB Leipzig who play in a similar fashion. With perhaps some more shrewd signings and keeping their current stars, such as Kostić and Paciência, it won’t be long before Hütter can bring Frankfurt into the top four conversation.