The 25th round of this Bundesliga season took us to the BayArena for the encounter between Bayer Leverkusen and Eintracht Frankfurt. Peter Bosz’s side wanted revenge for the big loss earlier this season against Frankfurt and the team was able to it by winning comfortably 4-0. Helped by the early lead, Leverkusen got the win and are still contenders for the Bundesliga title. 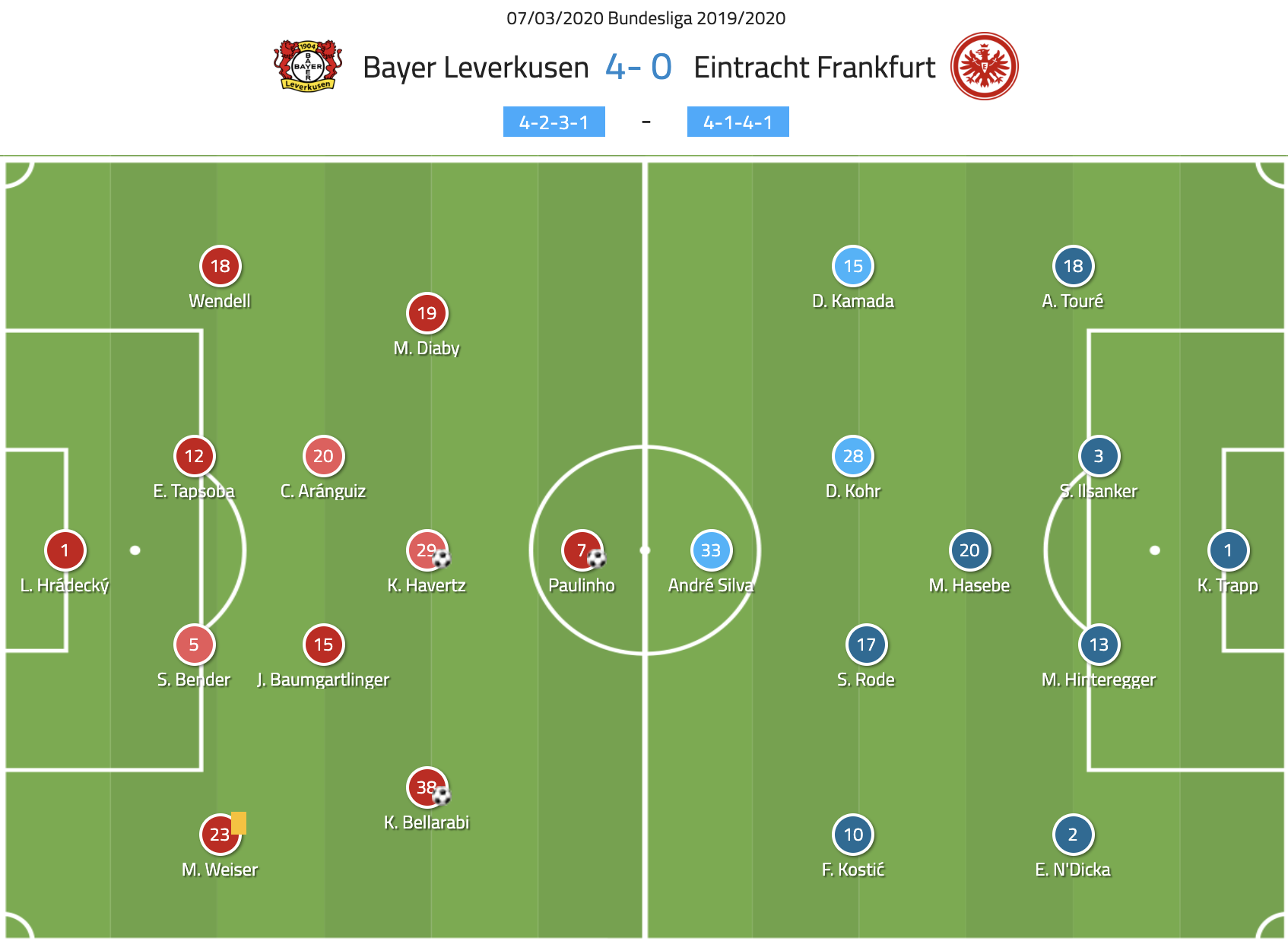 Bosz’s Leverkusen started in a 4-2-3-1 formation. The major absentee in the line-up was, of course, the injured Kevin Volland as the striker is possibly sidelined for the rest of the season. The Brazilian Paulinho started instead of Leverkusen’s vice-captain.

Adi Hütter’s side started the game in a 4-1-4-1 set-up. The head coach made three changes in comparison to their midweek DFB Pokal game against Werder Bremen. David Abraham, Timothy Chandler, and Djibril Sow were left out of the squad. Sebastian Rode, Makoto Hasebe, and Dominik Kohr started instead of them.

Leverkusen’s pressing was interesting during this encounter. We can call the way Bosz’s side pressed against Frankfurt a full-back on full-back press. Firstly, in this way of defending, the team has to decide on which full-back they want to press: the right or the left one? Leverkusen decided to put pressure on the left full-back, which leads to the organisation we can see in the picture below. The striker positions himself in front of Frankfurt’s right centre-back. The right-winger positions himself in front of the left-centre back.

In the pictures beneath, we can see an example of how Bayer Leverkusen applied this pressing tactic. In the first picture, we see that Frankfurt’s left centre-back Martin Hinteregger has the ball. The three strikers position themselves in such a way that Frankfurt’s left-back is enjoying a lot of space. The second picture is a few seconds later. Hinteregger passed the ball to his left-back Evan N’Dicka who know has the ball. As shown in the analysis, the full-back is pressed by Leverkusen’s full-back Mitchell Weiser. Due to this full-back on full-back press and the positioning that comes with it, N’Dicka has no passing options and is forced to play a long ball.

Just like Leverkusen, Eintracht Frankfurt likes to put pressure on the opposition early on. In their pressing, Hütter’s side uses three pressing triggers. These pressing triggers are a pass to the full-back, a pass to a midfielder who is facing his own goal and a ball back to the goalkeeper. On those occasions, Frankfurt starts to press. In their pressing, the side uses the rule that they only stop pressing whenever they have the ball, the opposition plays a long ball or when the ball is out of play.

The analysis shows how Eintracht Frankfurt applies one of these pressing tactics. In this example, Jonathan Tah passes the ball to his full-back, Weiser. This is the signal for Eintracht Frankfurt to start pressing. Frankfurt’s left-winger Filip Kostić starts pressing and forces Weiser to play the ball back to Tah.

A few seconds later, Frankfurt’s organisation is like in the analysis beneath. The side keeps pressing, which leads to a situation in which both wingers put pressure on Leverkusen’s centre-backs. Just after this picture, Leverkusen passes the ball to their left-back. Because Frankfurt’s right-winger isn’t there, the team applies the same way of defending as Leverkusen: the full-back on full-back press.

Another pressing trigger was a pass back to the opposition’s goalkeeper. On those occasions, the nearest player starts pressing the goalkeeper, and the analysis beneath is an example of that. Leverkusen’s goalkeeper has the ball after a pass from Tah. Kostić is the player nearest to the goalkeeper and starts to press aggressively. Due to his pressing, Kostić forces the goalkeeper to kick the ball long.

Despite their best efforts, Frankfurt sometimes struggled to put Leverkusen under pressure. As a result, Bosz his side was able to play through the press and create big chances. In the next section, we will take a closer look at what Frankfurt did wrong and how Leverkusen used this optimally.

How Leverkusen punished the mistakes of Frankfurt

Bayer Leverkusen got a big win, mainly due to mistakes of Frankfurt, especially in their pressing. These mistakes were due to players who hesitated during the press or pressing at the wrong moment when defending. Let’s take a look at four different moments in which we can see the problems Frankfurt had during this game.

The first example is in the build-up to Leverkusen’s first goal. In this example, Leverkusen played the ball to their left-back Wendell. Frankfurt’s right-back Almamy Touré hesitated to pressure Wendell. Due to this hesitation, Wendell could dribble towards the midway line. Touré was still not in position, which opened up space in the corner of the pitch. Leverkusen’s left-winger Moussa Diaby recognized this and made a diagonal run to receive the ball. Wendell played the ball to the winger, after which Kai Havertz finished Diiaby’s cross.

The second example shows how some Frankfurt players pressed at the wrong moment when defending. In the first picture below, we can see that there is no danger. Frankfurt defended at their half and there was no space for Leverkusen to attack. A few seconds after the first picture, we see the following situation (second picture). Leverkusen played the ball back, after which two Frankfurt players decided to press. Due to this pressing, Frankfurt lost their shape and gave Leverkusen space to attack. Leverkusen immediately punished Frankfurt for this mistake and doubled their lead to 2-0. 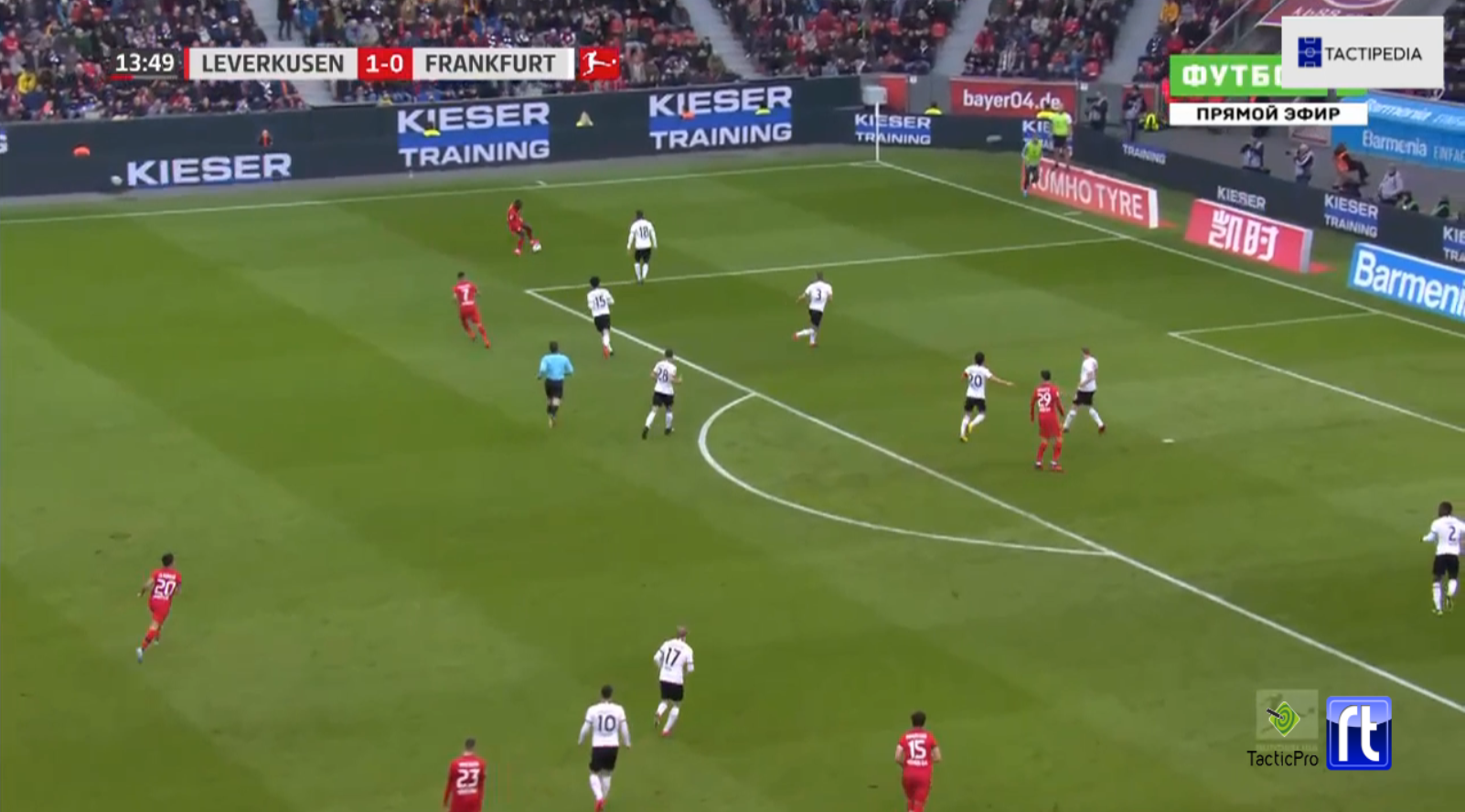 The third example also shows the lack of patience from Frankfurt. In this example, Wendell had the ball. The left-back was pressed by Frankfurt’s right-winger and forced to play the ball back. Frankfurt’s striker André Silva recognized this and started to make a run towards the keeper. Because of that run, Leverkusen got the space they needed to play through Frankfurt’s press and so Wendell played the ball to Edmond Tapsoba.

Due to this pass, Leverkusen had a numerical superiority. Eintracht Frankfurt’s players around the ball all hesitated: do I stay close to the player I marked, or do I press Tapsoba? The Leverkusen centre-back used this hesitation to dribble past the opponents which led to the situation in the analysis beneath. Again, Touré hesitated what to do. Instead of moving to the centre and close the passing lane forwards, the full-back stayed still. As a result, Tapsoba played a through ball to Diaby after which Leverkusen scored. However, the goal was ruled out due to offside.

Lastly, the analysis beneath shows again that some players pressed instead of backing off. In this example, Frankfurt lost the ball after which Leverkusen launched a quick counter-attack. In this counter-attack, Makoto Hasebe makes a crucial mistake. Instead of staying in the centre of the pitch to slow down the attack, the midfielder started to press a player who already was followed by two players. As a result, a lot of space opened up in the centre of the pitch, which Leverkusen used optimally. 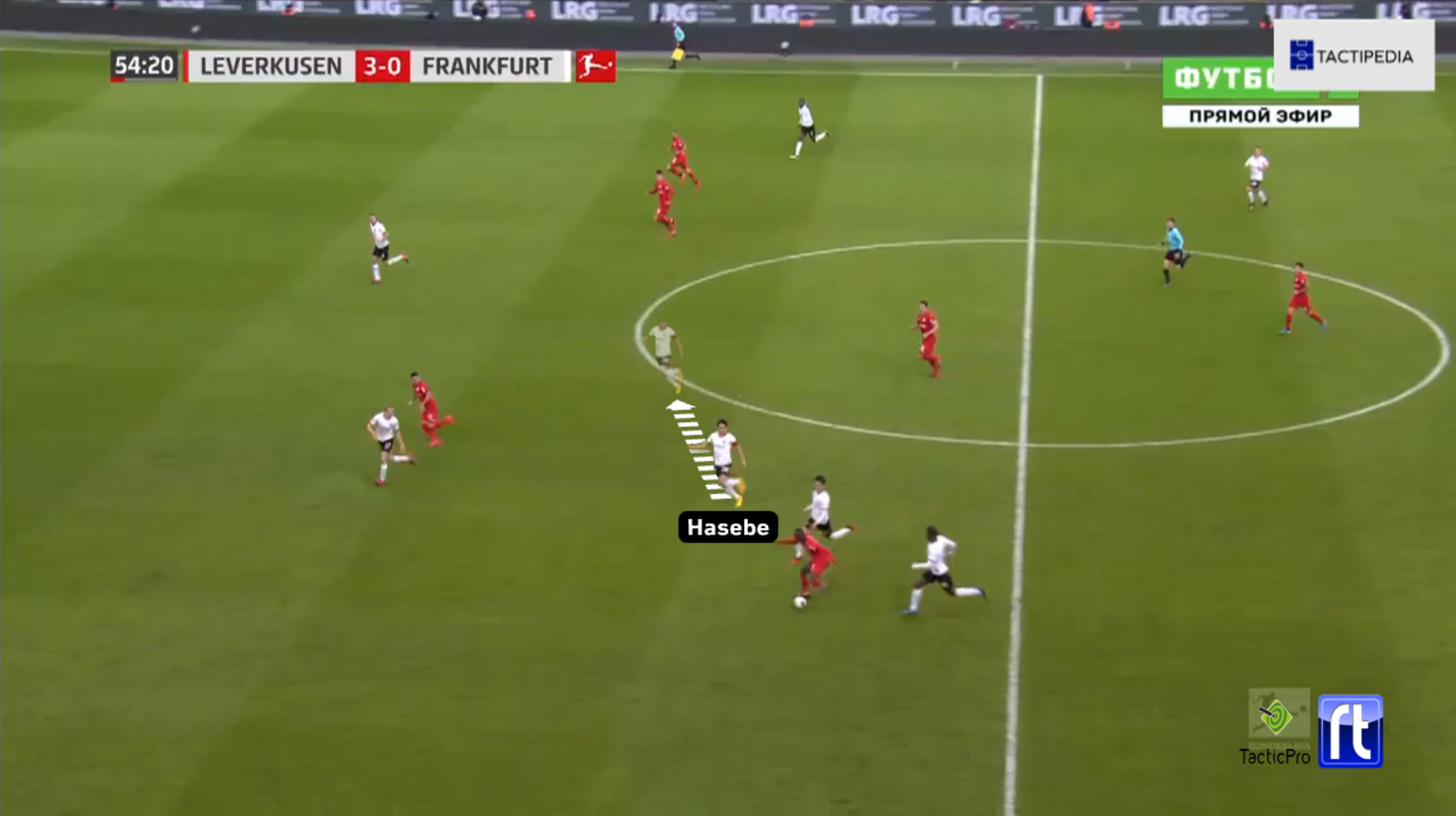 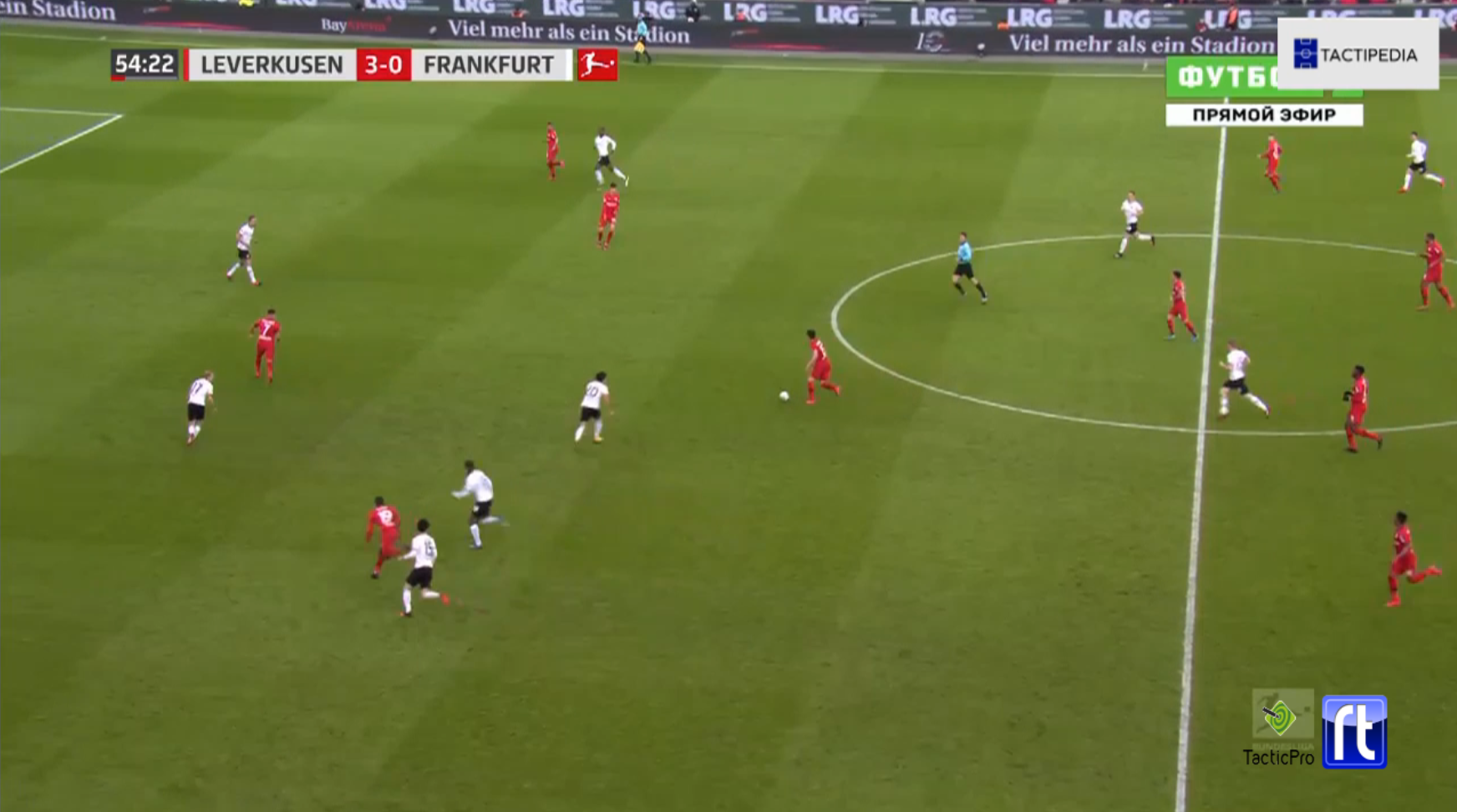 Bayer Leverkusen got the win they deserved. They were the better team and used the spaces that occurred optimally. Due to this win, Leverkusen stays close to the top spots and is still in the title race. It will be interesting to see if Bosz his side can close the gap towards Bayern Munich.

Eintracht Frankfurt had the best intentions for the game against Leverkusen. Hütter his side wanted to press high and with high intensity. These defending tactics, however, sometimes led to hesitation or “enthusiasm”. These moments opened up space and Leverkusen punished Frankfurt for it. It will be interesting to see if Frankfurt can close the gap to Schalke to grasp the last European spot.