Bayer Leverkusen hosted Union Berlin at BayArena in the quarterfinals of the DFB Pokal on Wednesday. Heading into the match Leverkusen had won a remarkable nine of their last 11 matches in all competitions; a run that includes wins against Dortmund, Union Berlin, and Porto twice in the Europa League, as well as a draw away against Leipzig. For the visitors, that loss to Leverkusen is their lone defeat since early February. This tactical analysis will examine the buildup play of both sides and dissect how Bayer Leverkusen took advantage late in the match. 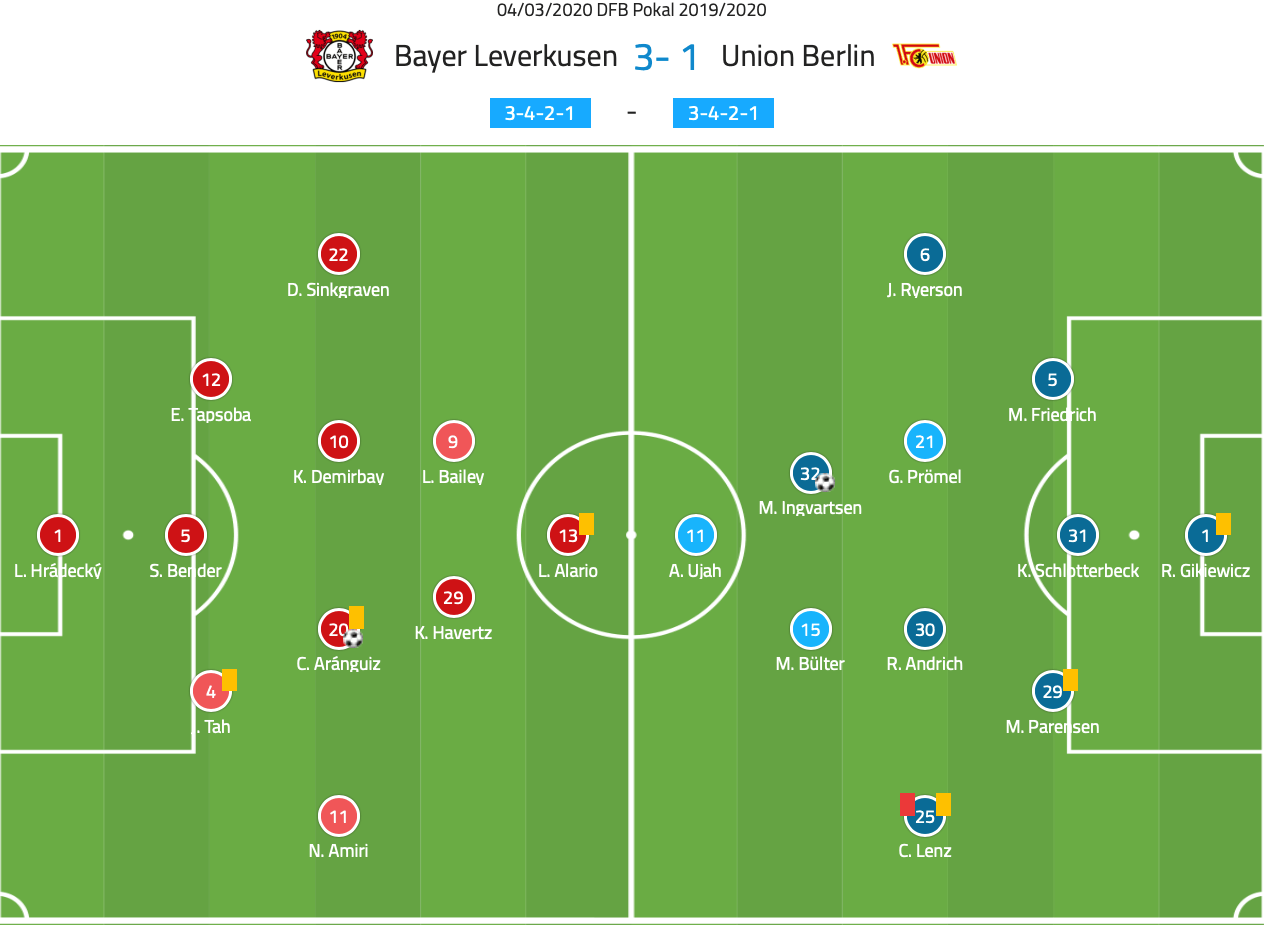 Leverkusen manager Peter Bosz sent his team out in a back three/back five formation, something he has previously done in a few matches this season. Jonathan Tah and Edmond Tapsoba were joined by Sven Bender centrally in the backline, who would often drop back between the two centre-backs. Tapsoba has been exceptional since joining Bayer Leverkusen from Vitória Guimarães late in the winter transfer window. Nadiem Amiri and Daley Sinkgraven played as the wing-backs, often on either side of Charles Aránguiz and Kerem Demirbay in midfield. Kai Havertz, Lucas Alario, and Leon Bailey formed a fluid front three to complete the formation.

Union Berlin began in a similar setup, a shape manager Urs Fischer has preferred this season. Marvin Friedrich, Keven Schlotterbeck, and Michael Parensen filled out the back three, with Julian Ryerson and Christopher Lenz occupying the wide areas behind Marius Bülter and Marcus Ingvartsen. Grischa Prömel and Robert Andrich start in midfield. Bundesliga veteran Anthony Ujah, despite only scoring three goals in 20 appearances in all competitions this season, started as the lone striker.

Union Berlin, who have surprised many this season with their more-aggressive-than-expected tactics, started the match on the front foot. They attempted quick, direct attacks using a variety of methods. 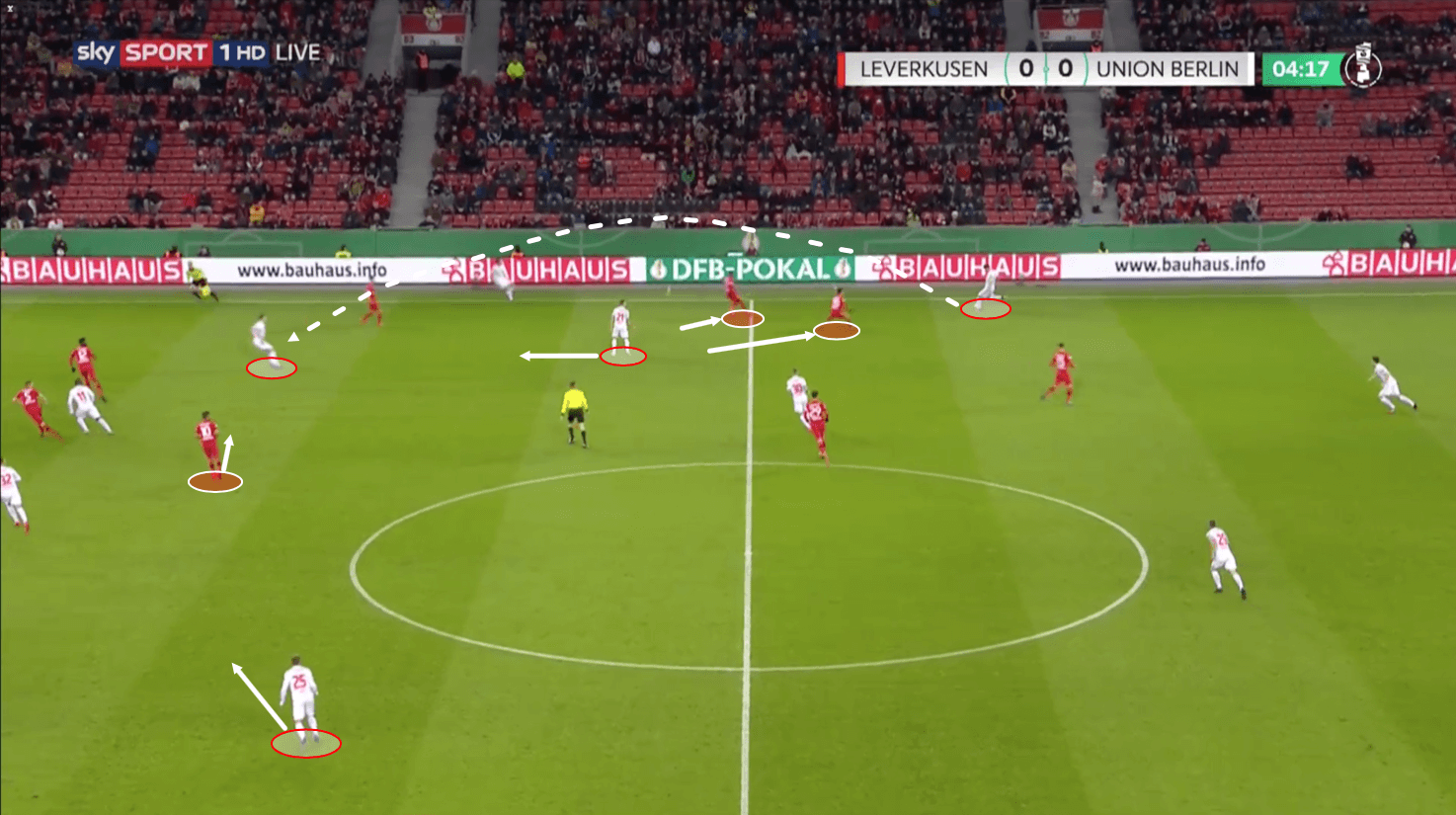 The image above explains one such method. With Leverkusen pressing the ball, Friedrich completes a long ball over the press and into the attacking half. Union Berlin’s possession on the right side of the pitch brings the opposing defensive players over to that side. 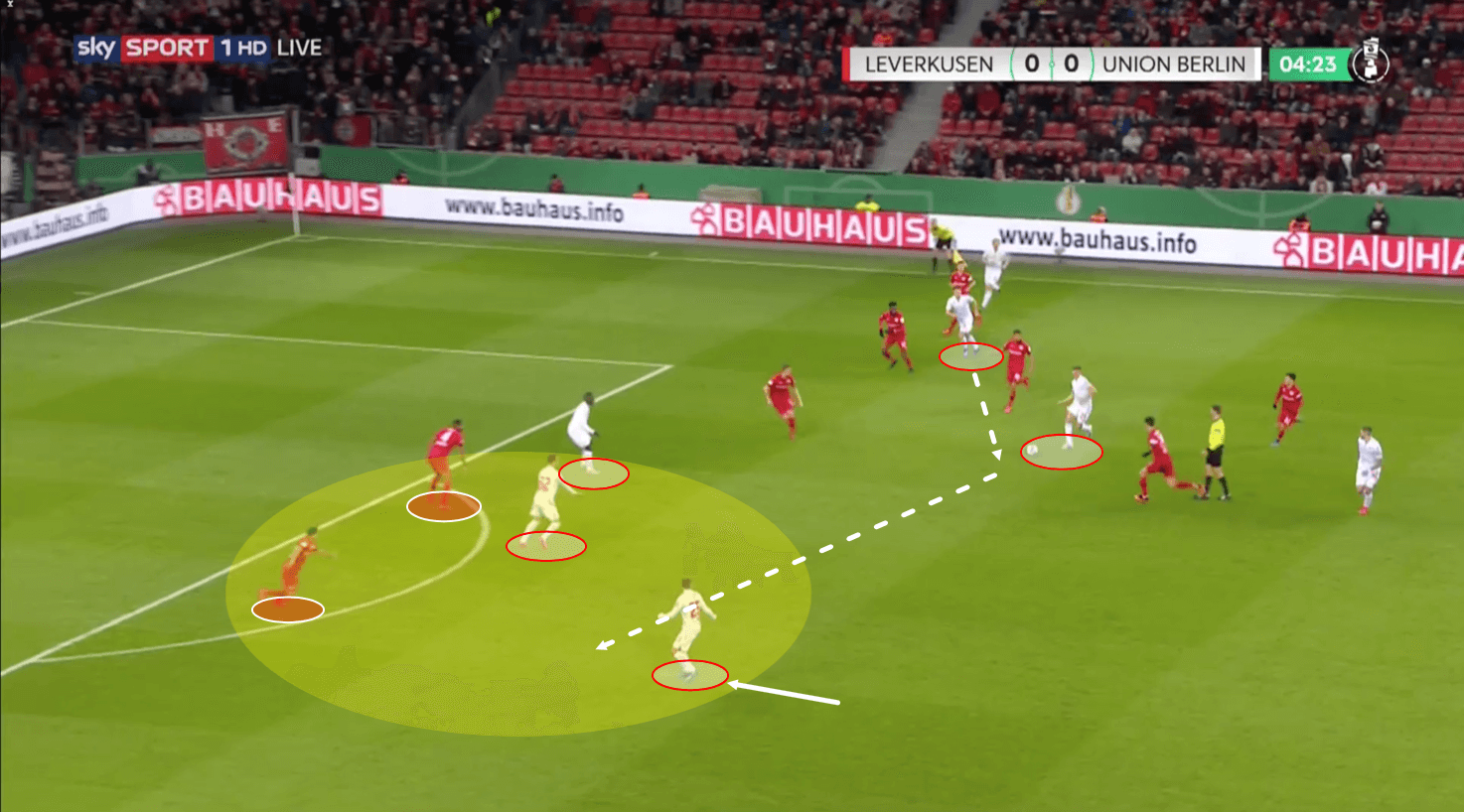 After receiving the ball, Bülter, Prömel, and Lenz combined on a switch of play across the top of the final third. Prömel’s pass to Lenz would’ve created a 3v2 situation for Union Berlin, but Lenz was unable to control the pass.

Another common method used by Union Berlin was a two-line press. The front two lines would press Leverkusen’s possession in the host’s half in attempts to intercept the ball and initiate quick attacks immediately following the press. 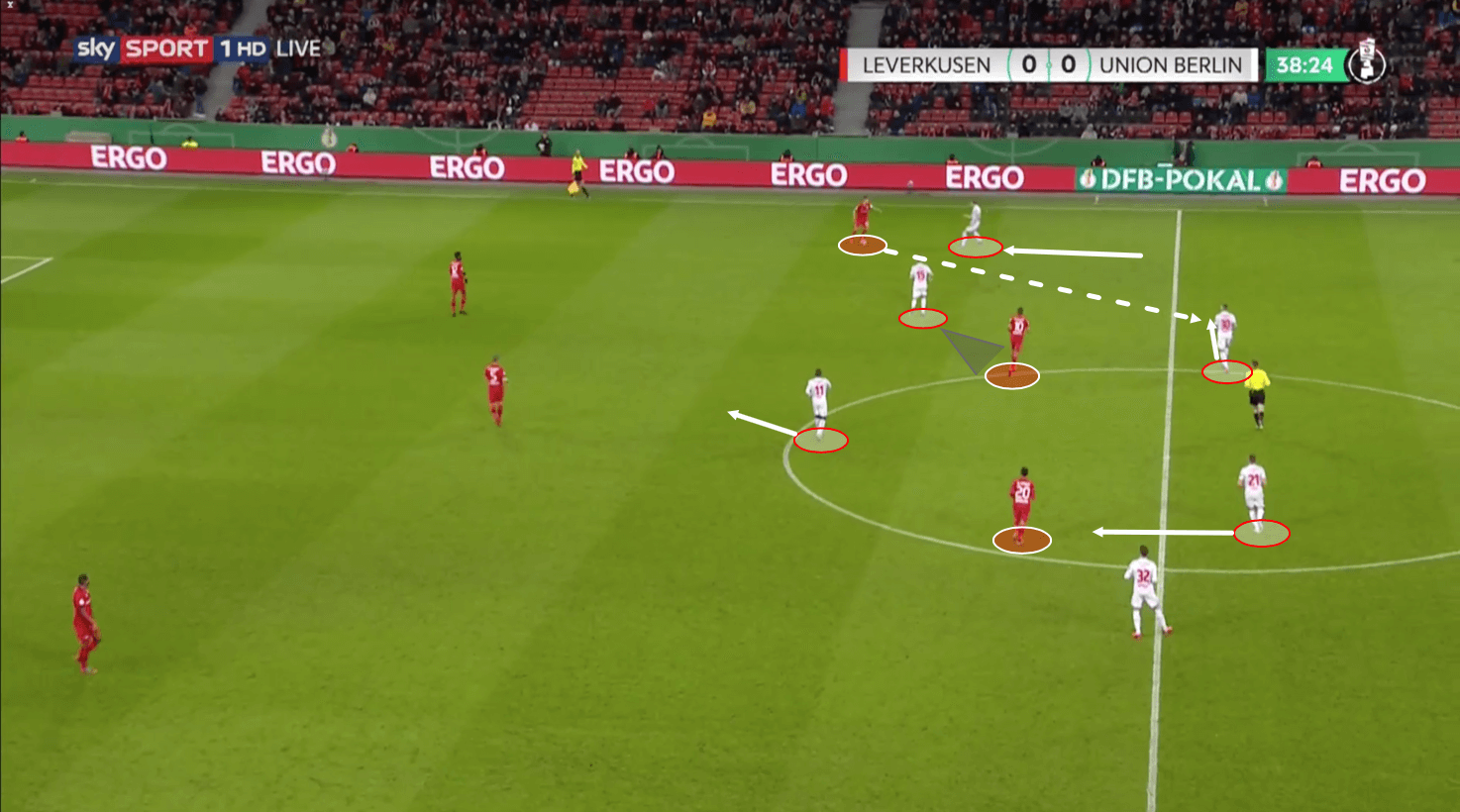 In this example, Ryerson pressed the left-wing-back while Bülter utilised a cover shadow on the ball-side central midfielder Demirbay. Sinkgraven was pressured into releasing the ball, and his hurried long pass was intercepted by Andrich. This press sparked a quick attack which resulted in the opening goal for Union Berlin from an assist by Bülter.

One major piece of context in Union Berlin’s goal was the positioning of Bender in possession. Many back five formations can easily shift into a back four formation through the forward movement of the central defending player, and vice versa. This was the role Bender played in this match. 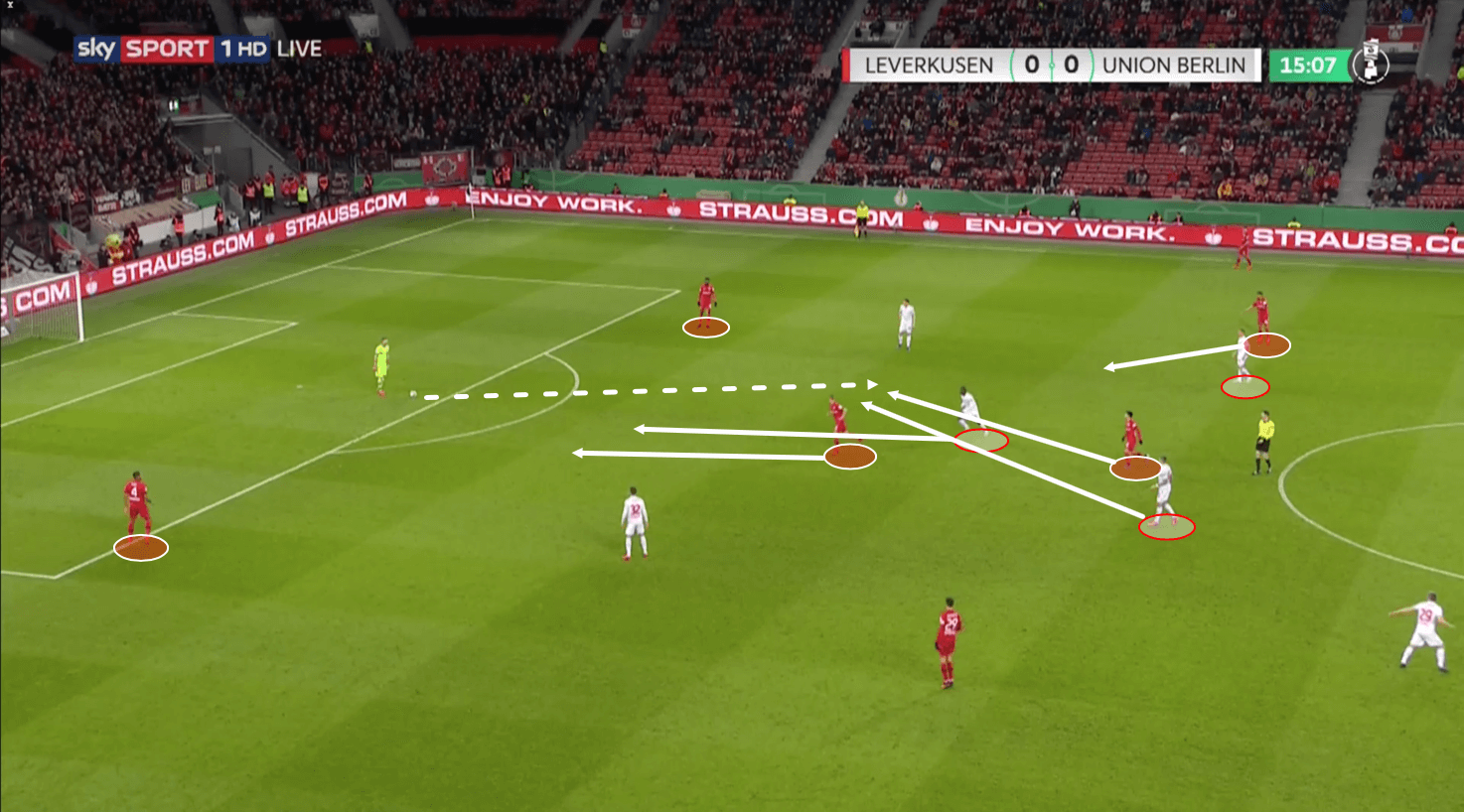 This set of images explain how Bender’s movements contributed to Leverkusen’s possession buildup. Here we see him dropping back between the centre-backs with an opposing player in tow. The deeper midfielder, in this case, Aránguiz, then dropped back into the half-space. Bender’s move backwards opened up a lane for the keeper Lukáš Hrádecký to connect with Aránguiz. 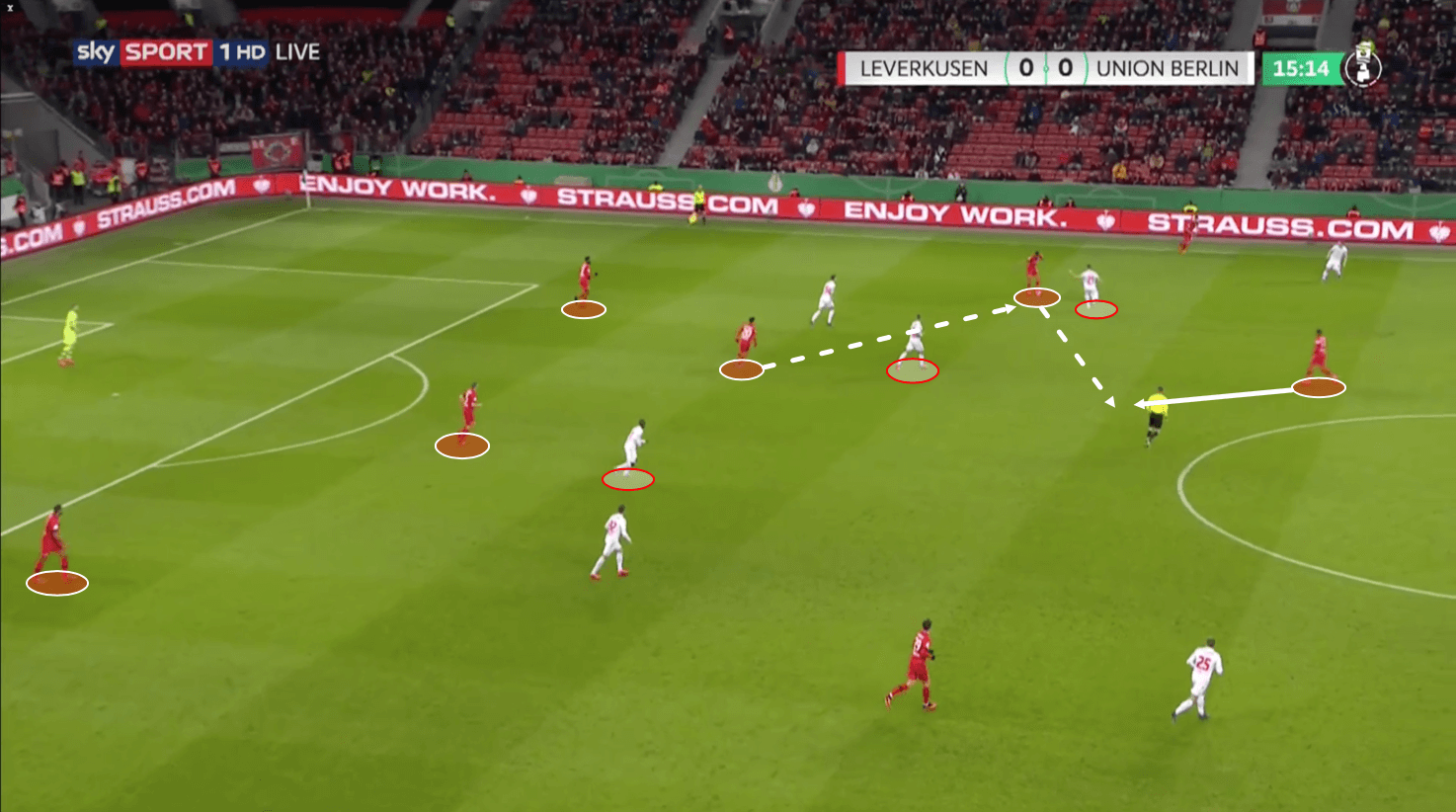 Aránguiz is able to turn wide and Leverkusen are able to complete two diagonal passes between the Chilean, Demirbay, and Bailey, effectively bypassing the two opposing central midfielders. 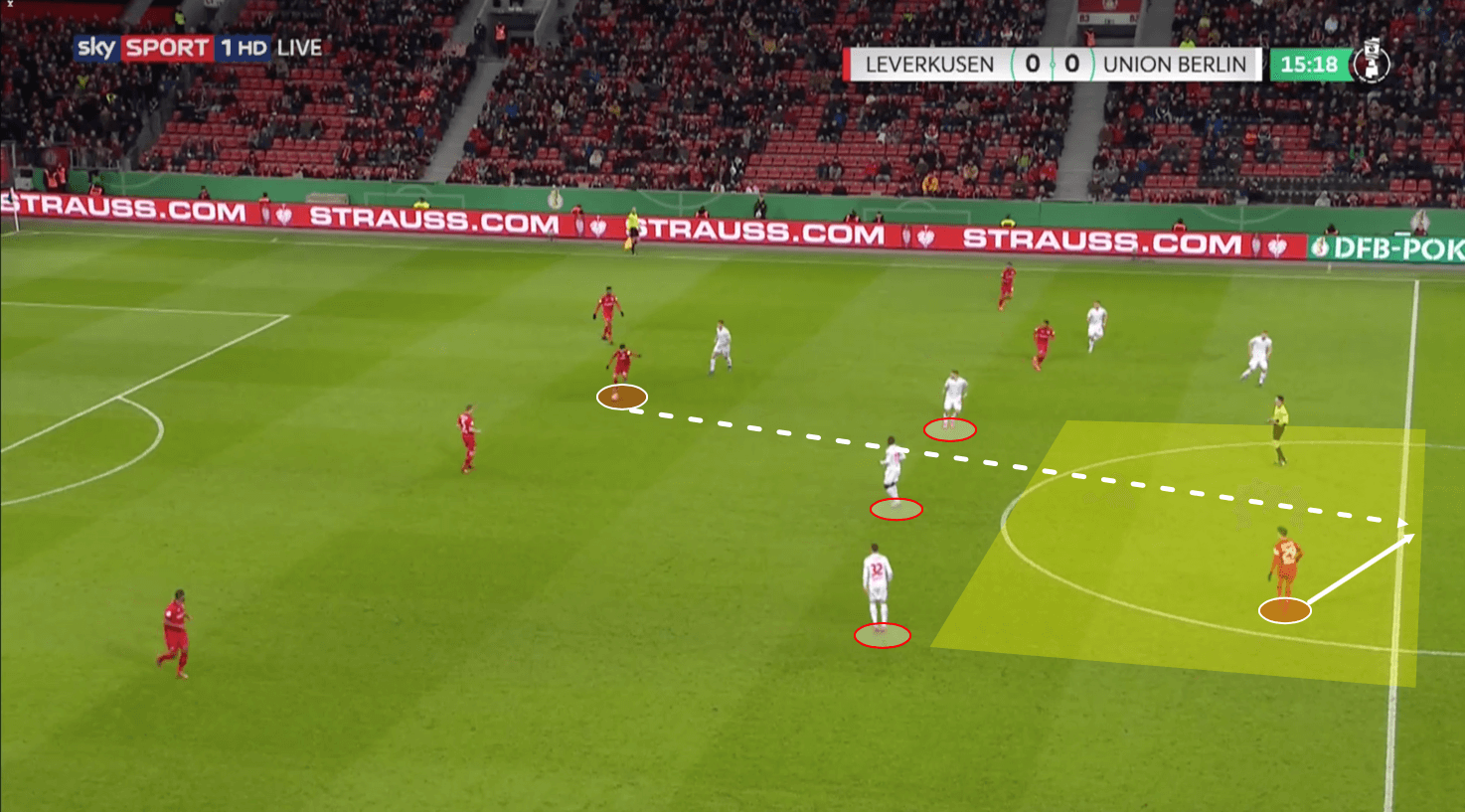 This series of actions also pulls the opposition forward, creating space centrally. After Bailey completes a backpass to Aránguiz, the midfielder sees a large amount of space behind Union Berlin’s front lines. He completes a long pass centrally to Havertz. This specific sequence resulted in a free-kick for Leverkusen in a dangerous area.

On Union Berlin’s goal, Bender not only doesn’t move towards the ball to provide a passing outlet, but he also doesn’t drop into the backline. This allows central attacker Ujah in Union Berlin’s front line press to stay comfortably in the midfield, which in turn allows the ball-side central midfielder Bülter to commit to his cover shadow and not press farther forward.

When Bender did drop back, Leverkusen were somewhat consistently able to bypass Union Berlin’s front press. At halftime, Bosz switched his side to a back four system, subbing out Tah and shifting Aránguiz to the central defensive midfield position in front of Bender and Tapsoba. Their attacks would still be stopped however by Union Berlin’s defensive tactics when Leverkusen reached the attacking half. The visitors would drop back quickly into a low defensive block, and this mostly proved difficult for Leverkusen to penetrate. 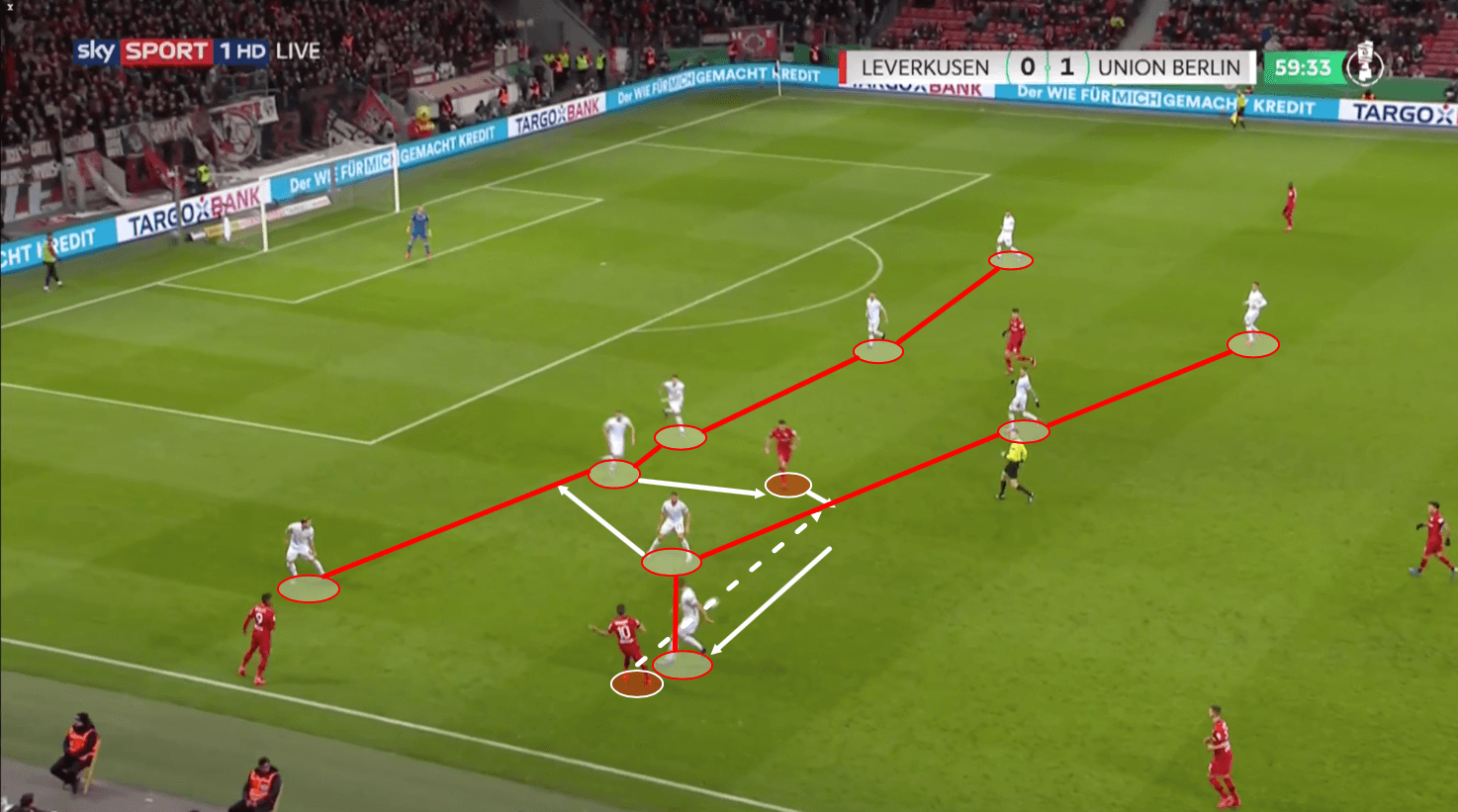 Here we can see Union Berlin’s 5-4-1 defensive block utilise positional rotation to maintain shape. With Demirbay on the ball, Bülter moves wide to press the ball. Demirbay’s pass inside is completed to Alario. The right-centre-back Friedrich follows the striker as he drops back to receive the pass. The other ball-side midfielder Prömel temporarily drops back to cover the space abandoned by Friedrich until the centre-back is able to return to his usual positioning. As stated, this structure was problematic for Leverkusen until late in the match thanks to a certain advantage.

The substitution at halftime of Moussa Diaby proved beneficial for Leverkusen later in the match. His quickness on the ball was difficult for the wide defenders to contain in the defensive block, and this eventually resulted in Lenz’s first yellow card in the 61st minute. Lenz later received a second yellow for a late counter-pressing tackle high up the pitch. Now with a man advantage, Leverkusen were able to capitalise. 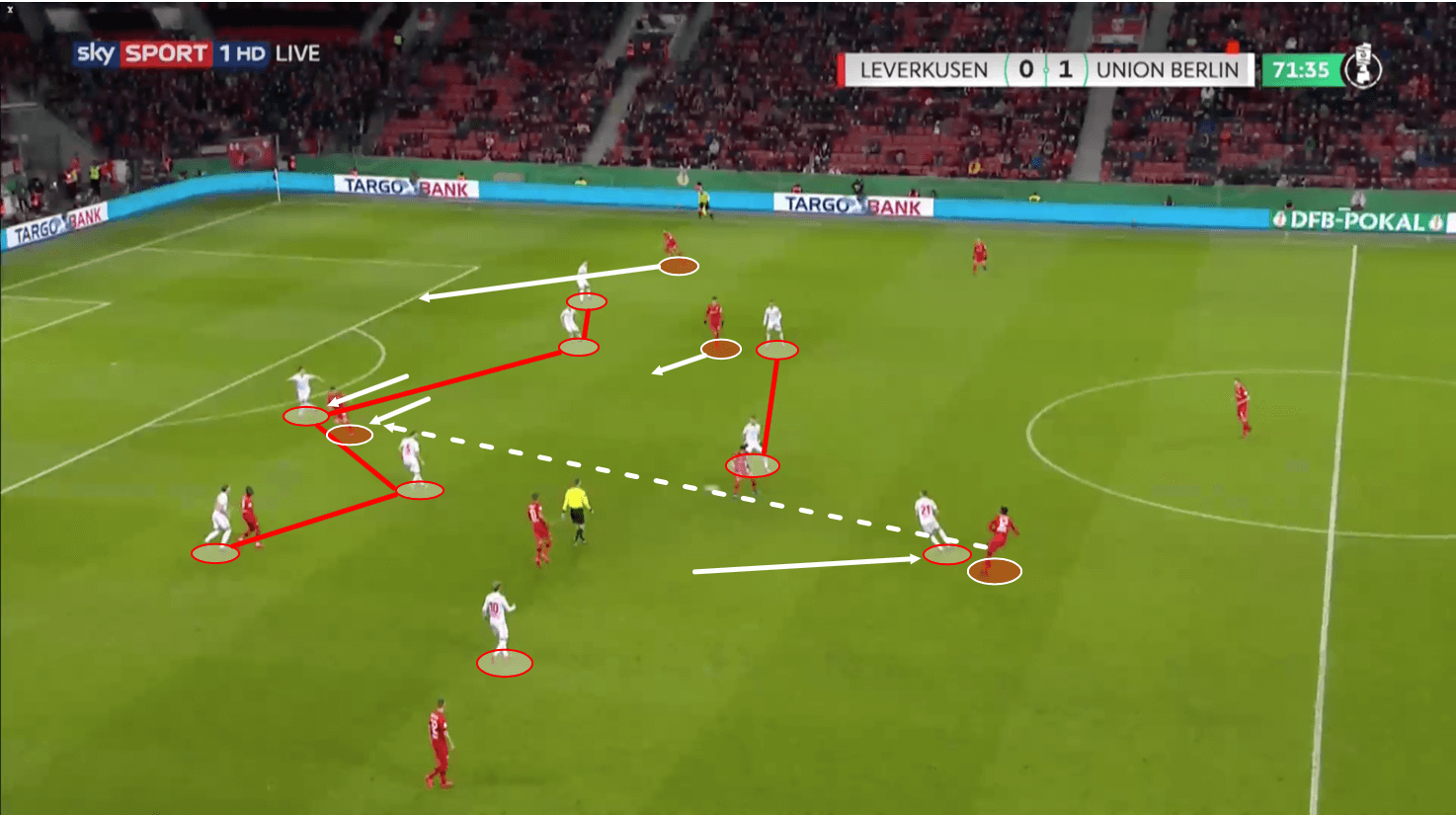 Just over a minute after Lenz received his sending off, Leverkusen scored the equaliser. Union Berlin had shifted into a simple 5-4 shape, and in this scenario the ball-side central midfielder Prömel stepped forward to press, resulting in a hole in the midfield line. Tapsoba’s line-breaking pass dishevelled Union’s backline, with the central-centre-back moving to his right and then forward to press the ball. 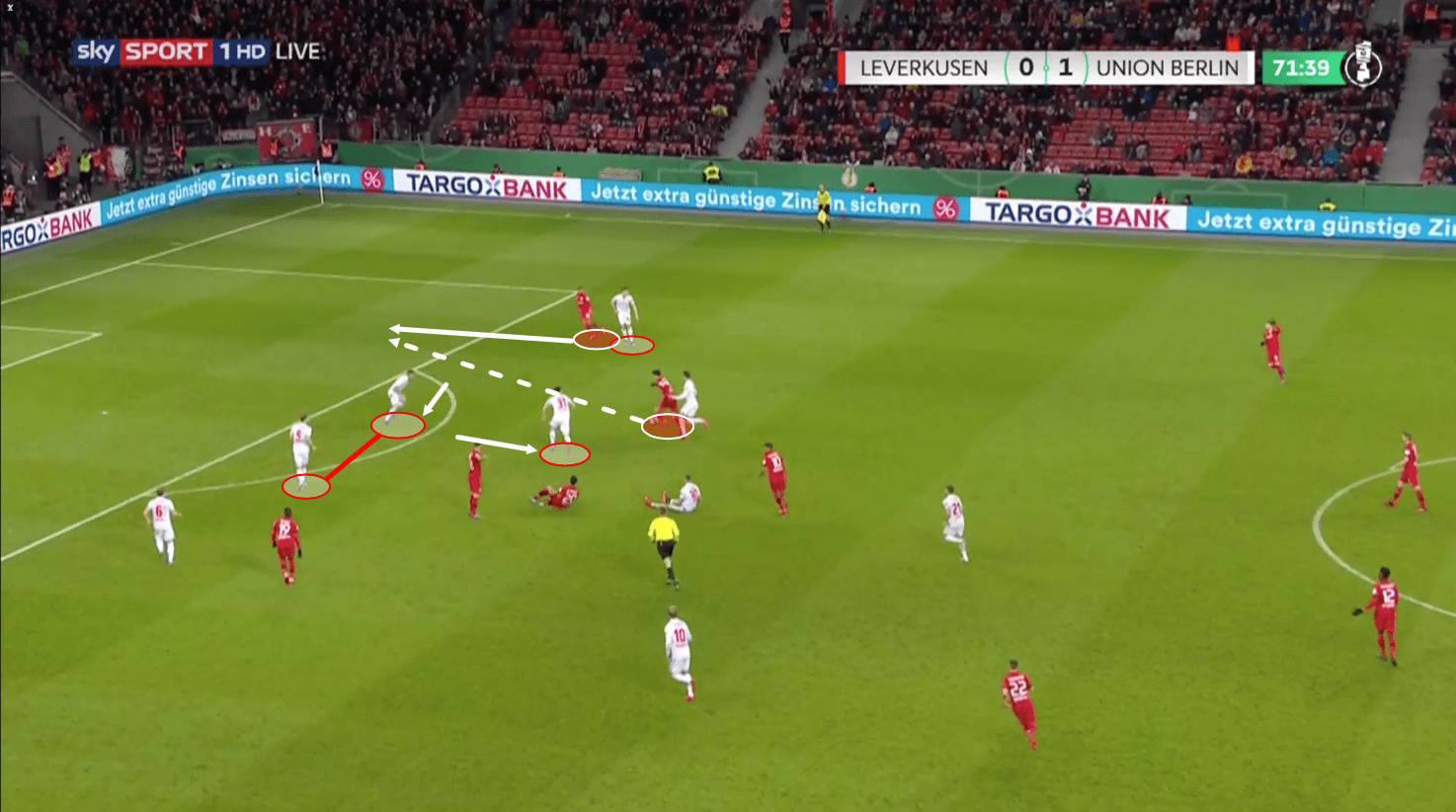 This forced the right-centre-back to shift further inside, which in turn opened up a hole in the left-central space of the backline. Havertz completed a pass through this hole to Bellarabi for an assist. 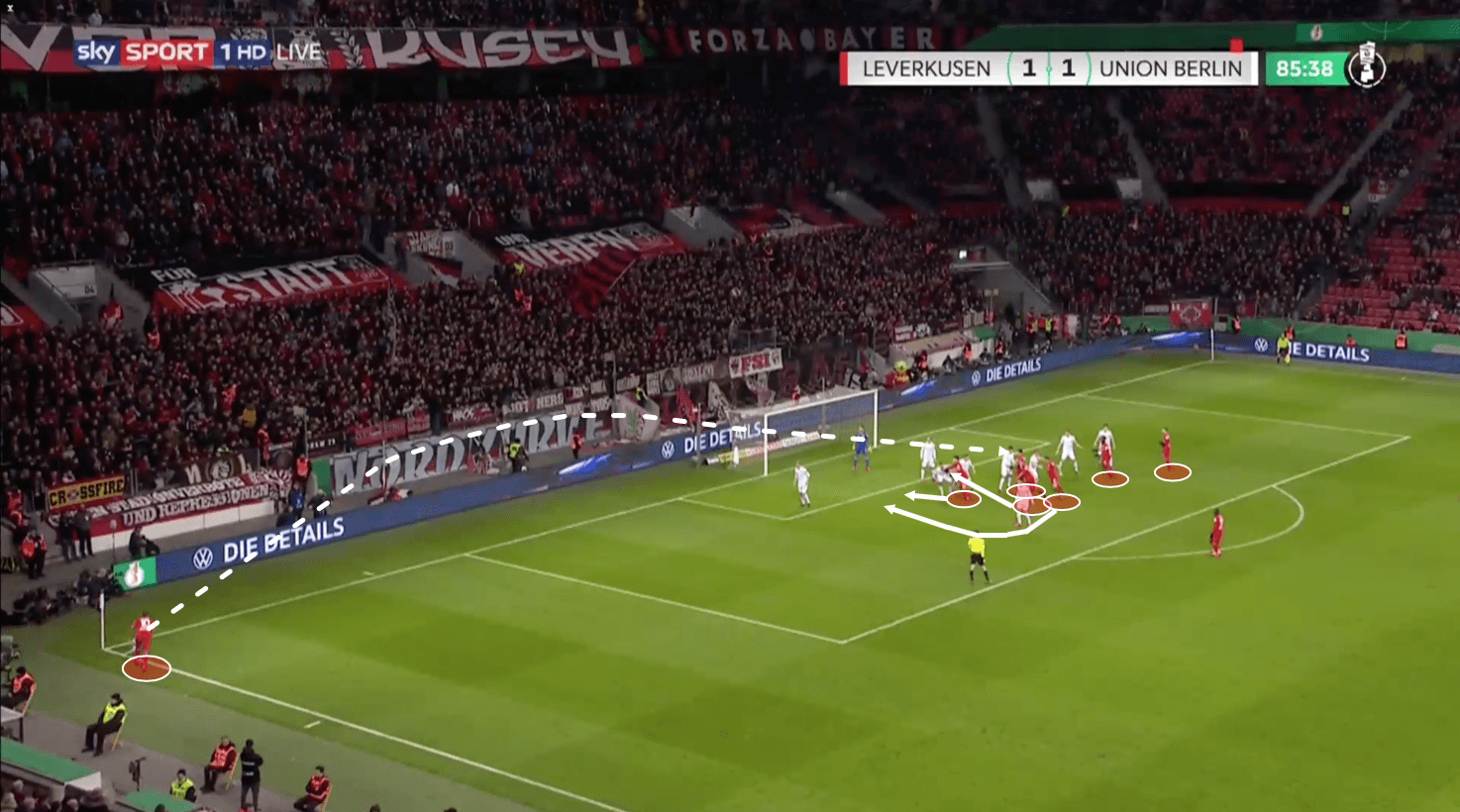 Union Berlin’s numerical disadvantage left themselves in too difficult a position to reorganise defensively. Leverkusen earned a corner as a result of a quick run behind the line by Diaby. The corner kick routine involved four players centrally in the 18-yard box with two at the far side of the box. Three of the centrally-positioned attackers made runs down into the six-yard box, leaving one man alone in the central space. Union Berlin’s man-marking was actually successful in the sense that no one lost their man, but it was simply that substitute Christopher Trimmel had his back to the ball and never turned to look and see where the ball was going. The 5’7”-tall Aránguiz scored a rare headed goal to give Leverkusen the lead.

Union Berlin had little choice but to push farther up the pitch and risk allowing space to open up in their own half. Bayer Leverkusen would score a third goal late in added time as a result of this.

With an xG value of 2.33 compared to Union Berlin’s 0.47, Bayer Leverkusen’s advanced statistics made a considerable jump after the Lenz’s departure. 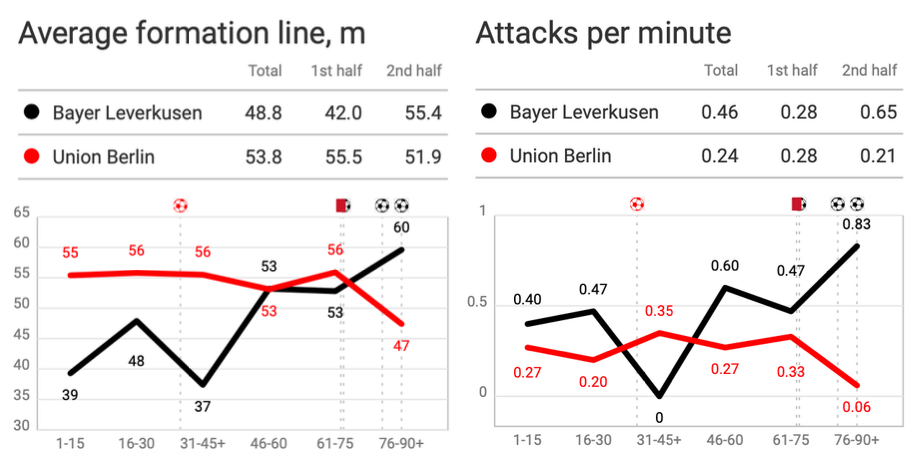 As can be seen in the statistics analysis charts above, Leverkusen saw a boost in both their average formation line and their attacks per minute post-Union Berlin’s red card.

In what initially began as an even-fought match, substitutions and taking advantage in a profitable situation led to Bayer Leverkusen extending their unbeaten run to eight matches in all competitions. In addition to progressing in the DFB Pokal and competing for the hotly-contested Meisterschale, the North Rhine-Westphalian club will also continue their Europa League campaign after being drawn against Rangers in the round of 16. Union Berlin will now focus on staying in or near the top half of the league table in what is turning out to be an overall impressive season for the Bundesliga debutants. 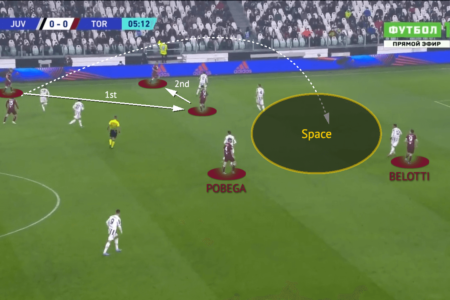