Liverpool are dominating the Premier League this season and it is clear that Jürgen Klopp’s plan is coming to its apex throughout it. They have a comfortable point advantage over their closest opponents so we can be sure that they’ll win the title, although they are going through a slightly rocky period at the moment. The fact that they don’t rate many domestic cups gave the chance for their youngsters to show what they got and to fight for their spot in the first team, and some of the players have displayed performances that pointed them out as the potential world-class add-ons to the Reds’ squad in the years to come.

One of the brightest players in their reserves is Curtis Jones, an omnipotent midfielder who is the embodiment of the modern half-space roamer and will surely find his place in Klopp’s tactics, starting from this year. This tactical analysis scout report will show you the biggest strengths of the 19-year-old Englishman and in what ways he can add to the current squad.

The first thing that comes to mind when watching Jones play is that he is a polyvalent player who can respond to requests in various positions around the pitch. We have seen him play both in the midfield role and out on the wing, but with the main task of playing in the inner-corridors and providing his side with through-the-ground progress options.

His original position is as a central midfielder as he feels most comfortable in it and has provided his best performances when playing there. From that position, he can be included in every phase of the attack which allows his team to benefit from his build-up skills as much as from his link-up. 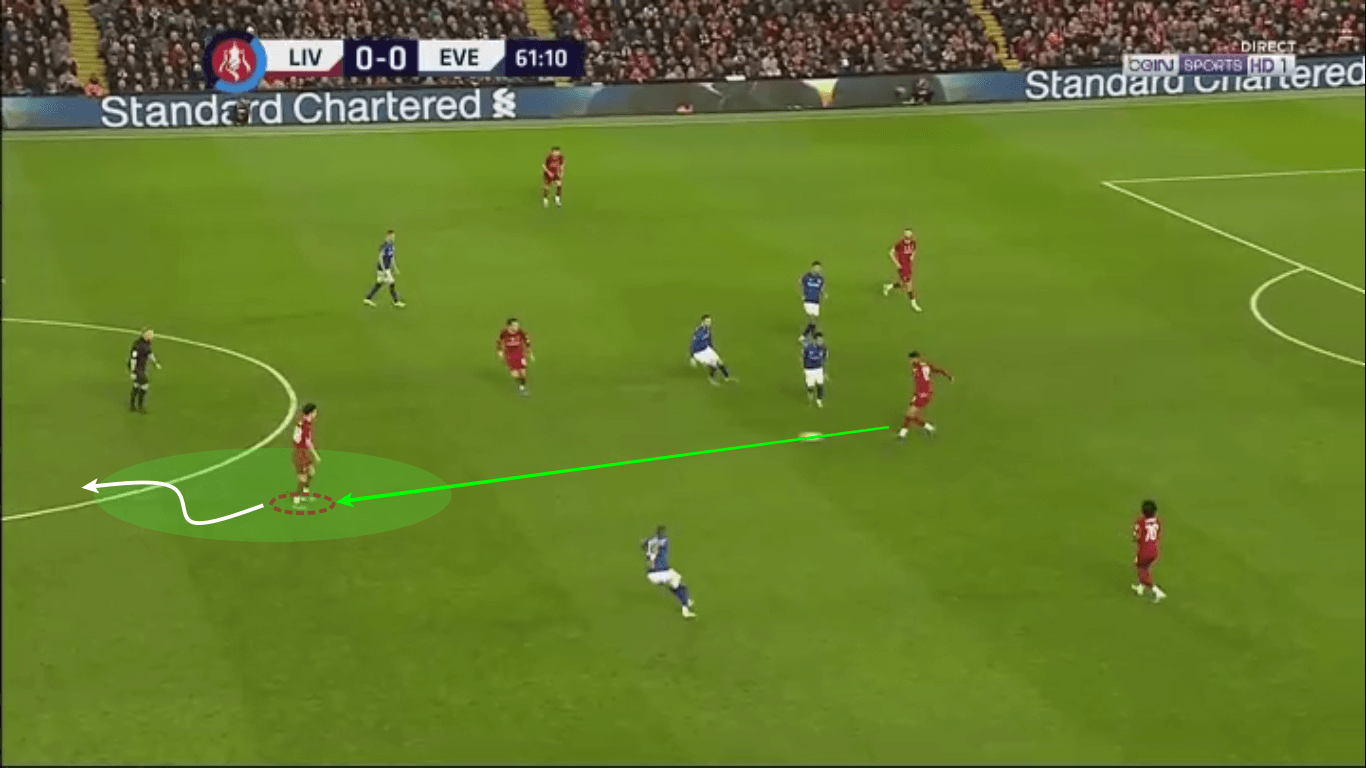 When playing as the ‘number eight’, Jones often comes lower down the pitch to help his defenders break the first line of the opposition’s pressing. His good positioning mostly takes place in the inner-corridors and he tends to turn around quickly if he has space behind his back, moving the play forward for Liverpool.

The youngster’s cooperation is also on a high level and his security on the ball implicates that he will possibly become an important player for Klopp’s tactics. He doesn’t panic under pressure and likes to get the ball when pressed by more than one player, from where he frequently plays a one or two-touch pass to the closest teammate and continues his run in order to get the ball once again. 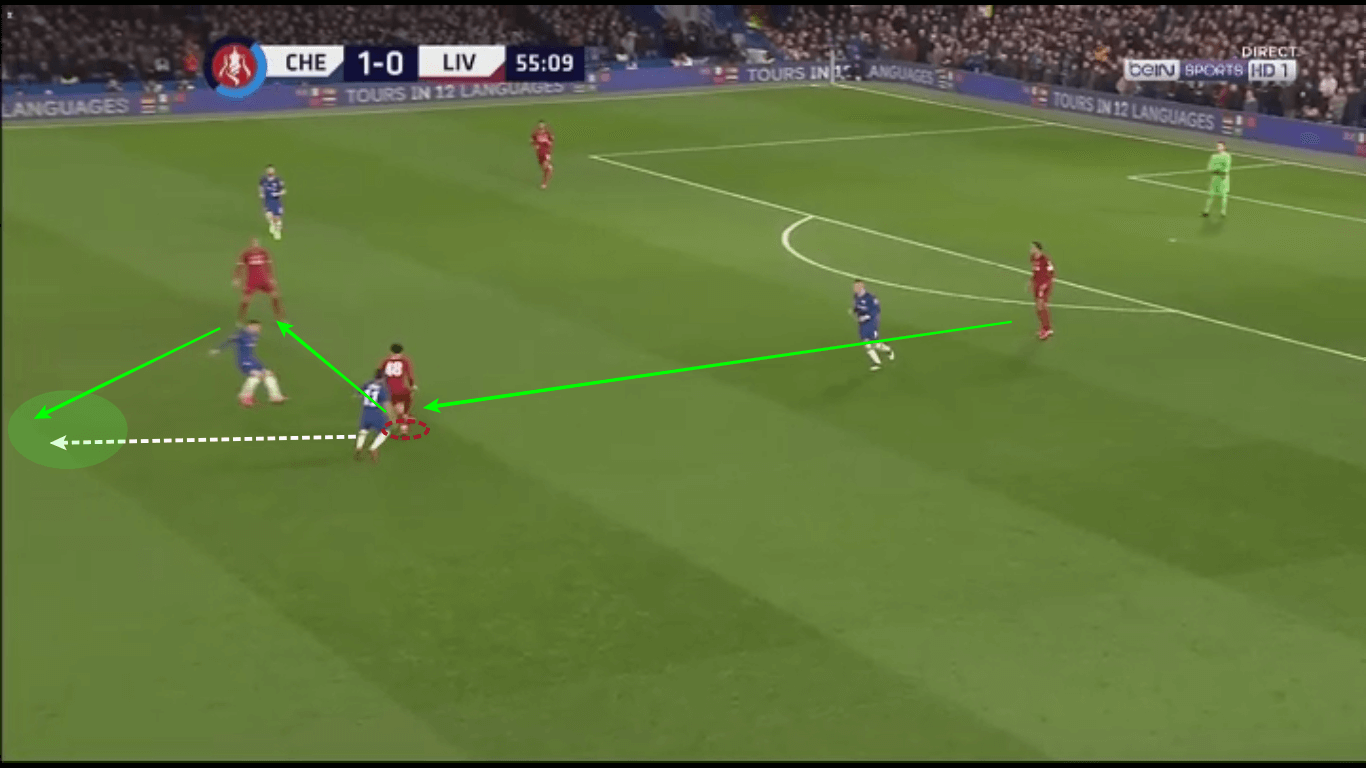 Here we can see his common inclusion in the build-up phase of the attack as Jones gets the ball under pressure – guarded by two opponents – but gets the ball quickly to his midfielder after which he continues his run into the open space. This movement helps his team break the opponent’s pressing and leads them higher up the pitch from where they could break into numerical superior situations.

He repeats these actions in the second third of the pitch, using his fast passing and sense for the space to disrupt the opposition’s lines. The fact that he doesn’t run away from uncomfortable situations in which defenders have a surplus over him opens up a lot of free space in rival’s structure for others – or himself – to exploit. 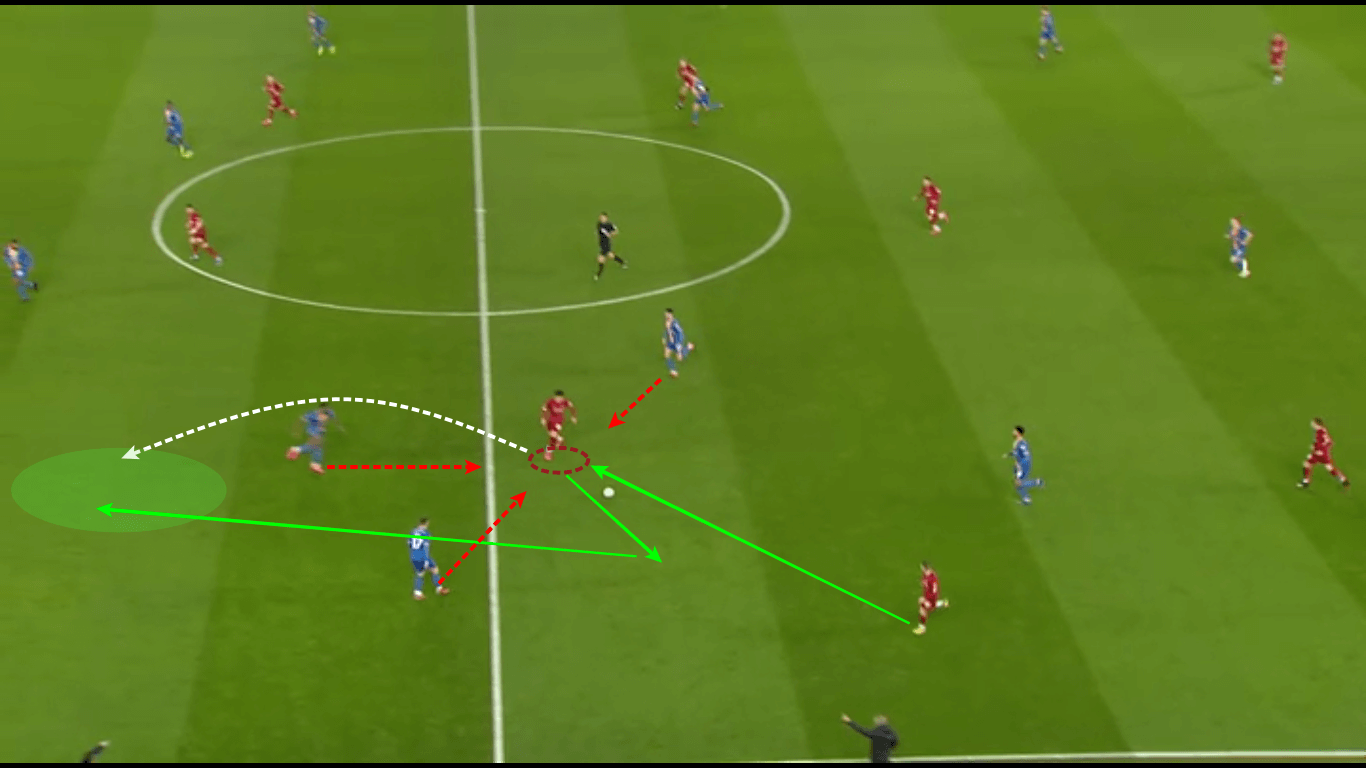 In the image, it is shown how he habitually drags opponents out of position with his good positioning and then tries to get the best of the situation by playing quick passes and continuing his run towards the created gap. He is brilliant when he needs to play with his back against the goal as he shields the ball with good composure and knows how to time his actions perfectly. That makes it possible for Jones to play a big part in the link-up through the lines as he often positions himself in gaps between the lines opening up deep passing lanes for his teammates. 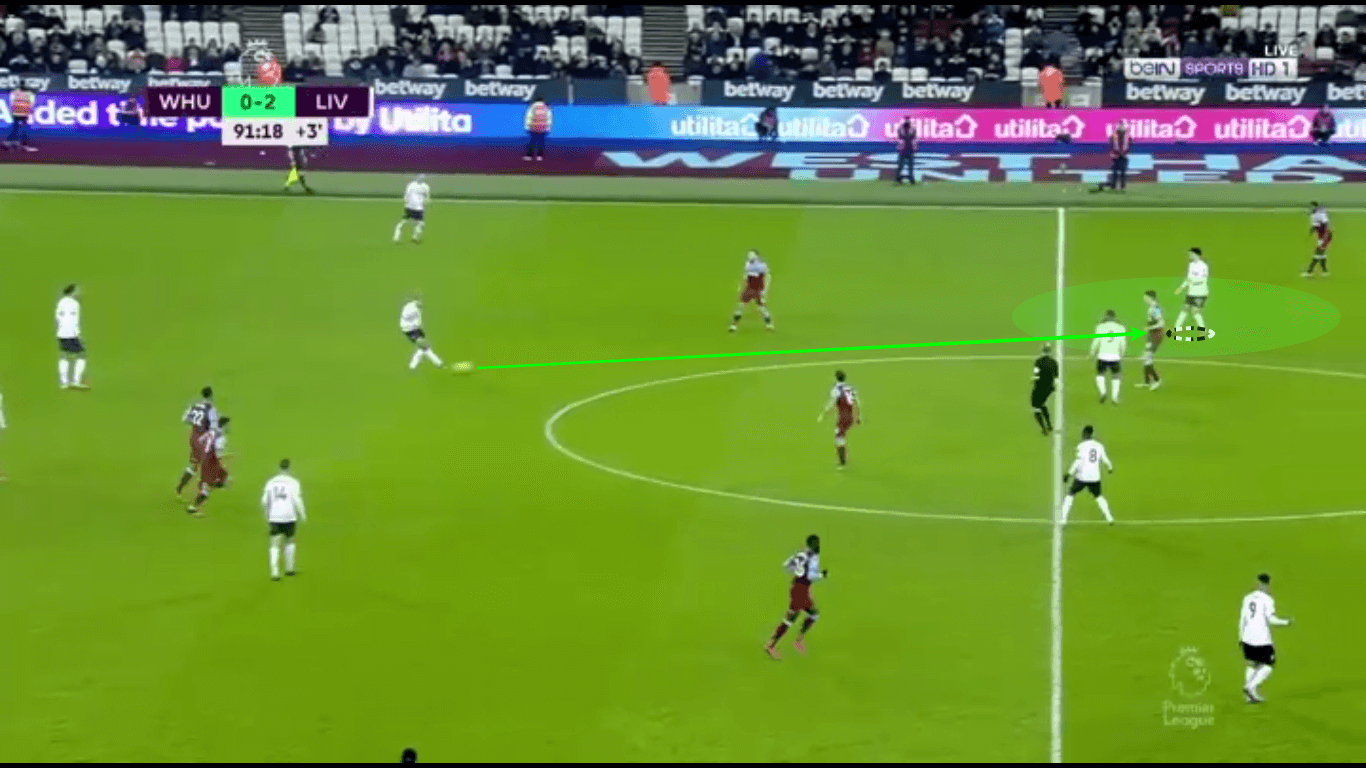 The 19-year-old’s movements are outstanding and he time and again provides his team with a progress option in situations where it seemed progress is impossible. That happens mostly due to his calmness when pressurized and the ability to work in restricted areas and not make errors.

The midfielder mostly positions himself in the gaps, as is mentioned earlier in the analysis, and if he senses that he has greater space to manoeuvre, he utilizes it by turning towards the goal quickly and usually deciding to go for a fast forward pass after it. 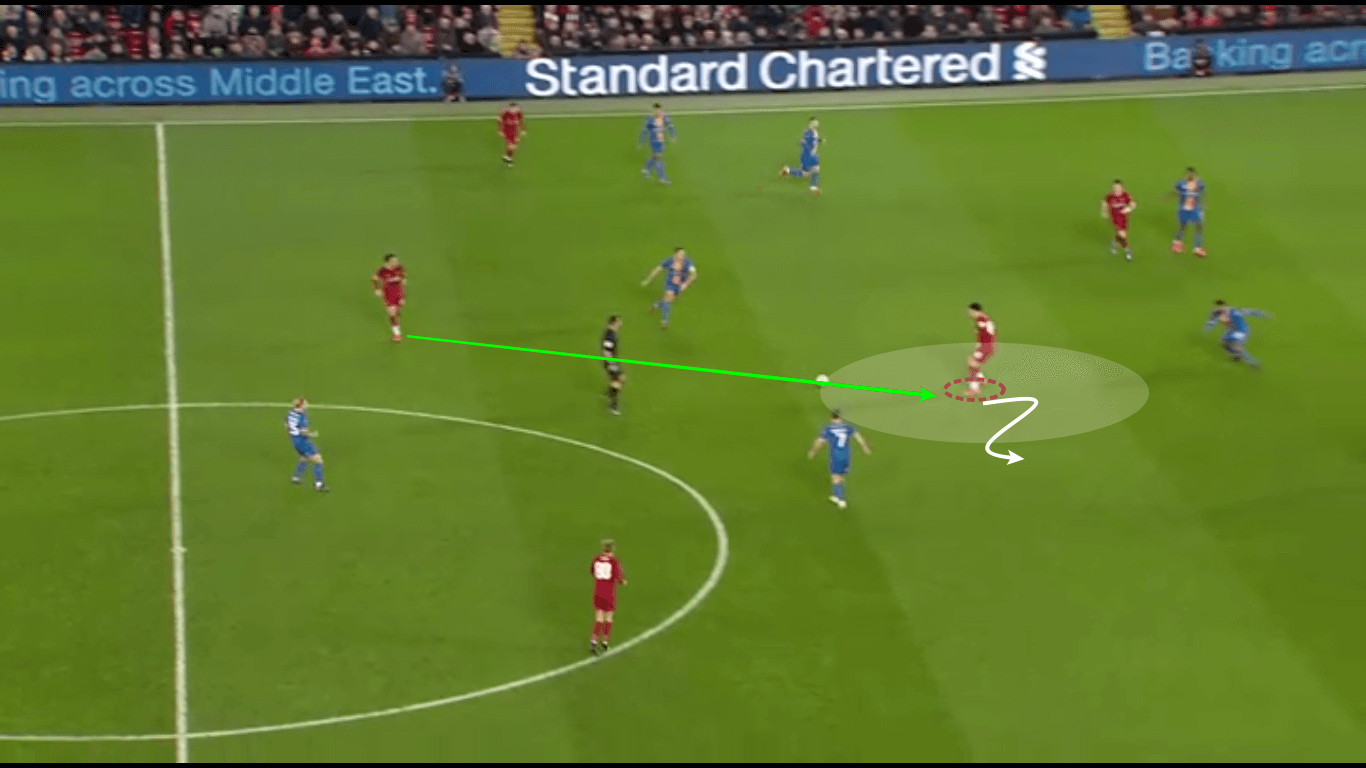 As we can see, the room in which Jones got the ball is not that big, but it is good enough for him to get the ball and turn around. He is not a player who likes to decide situations through dribbling, so in the situation like the one shown he mostly goes for an open teammate when the defenders get too close to him and open the room in some other areas of the field.

Jones is a player who is also familiar with playing out wide or closer to the opposition’s goal, both as a winger or as an attacking midfielder. In one way or another, he mostly operates in the left half-space when playing in those roles – and also quite often when playing as a mezzala – with a lot of progressive duties.

His sense for space is already on a Premier League level and he wants to be included in the actions that take place in the final third. The midfielder’s most common run in those areas comes from the inner-corridor and it is aimed behind the full-back in order to get the ball in the assist zone from where he mostly plays return-balls and sharp crosses. 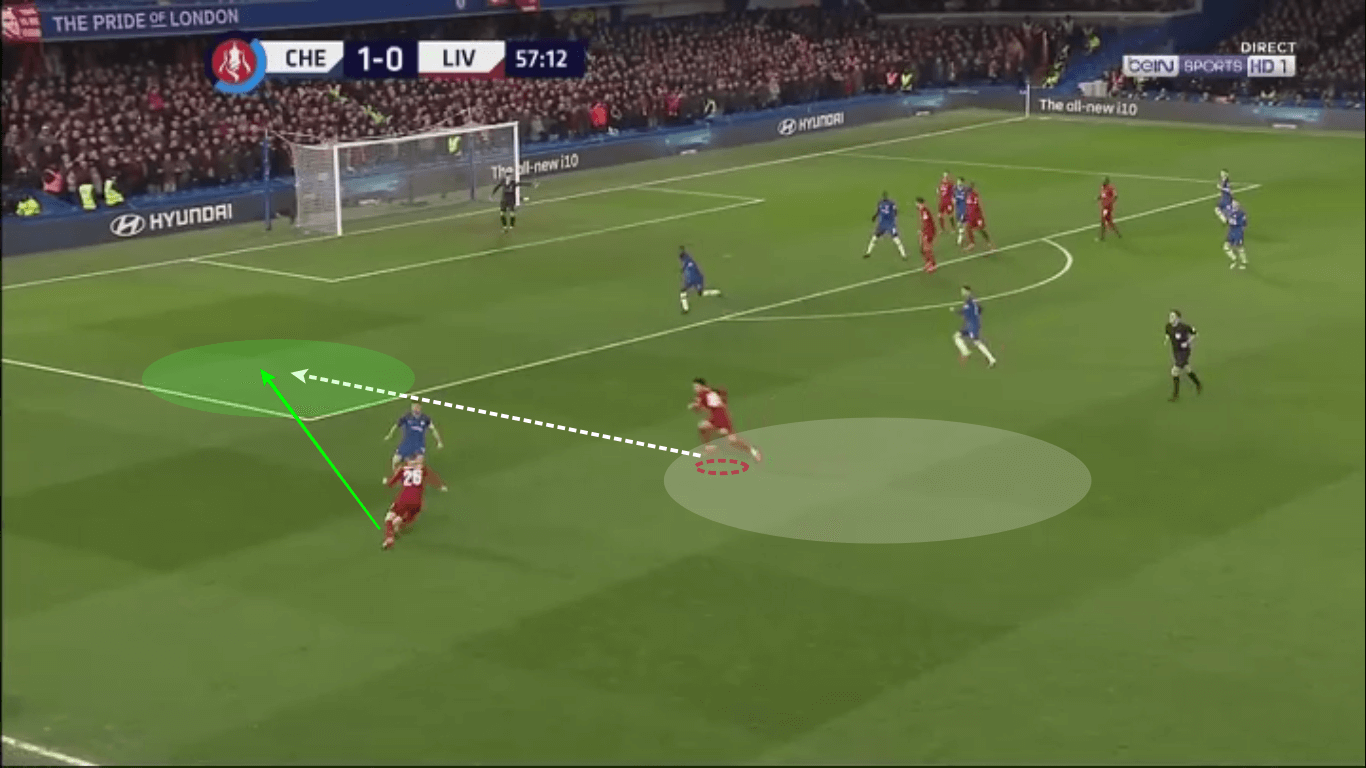 He times those runs excellently and repeats them very often giving support to the wide defender and securing 2v1 situations over the player without the ball. His runs are similar to Kevin de Bruyne’s, and they can bring new blood to Klopp’s tactics, being most useful when Jones plays in the half-space closer to the inverting winger – which is often Mohamed Salah’s role.

Jones’ cooperation stays fantastic in the high zones of the pitch and the main indicator that he will be a great add-on to Liverpool’s system is his connection with Takumi Minamino, who is seen as one of the main players they will have in the upcoming years. They’ve already built a great understanding making the midfielder exploit the room that the Japanese international creates with his movement, coming with runs out of the second line. 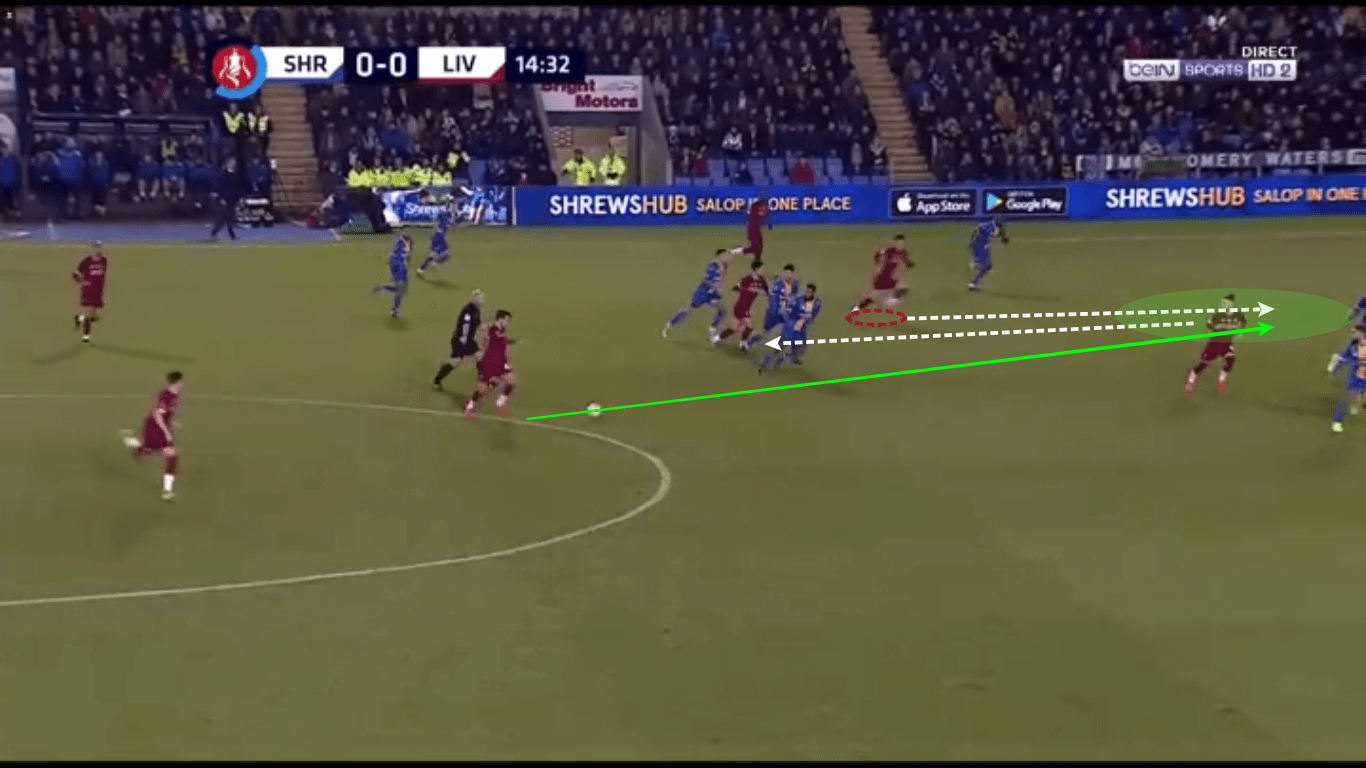 As we can see above, Minamino’s fake run opens up the passing lane to Jones, who senses the free space and runs into it where he gets the ball. The collaboration between the two of them could easily be one of the key strings in the era after the deadly trio of Sadio Mane-Roberto Firmino-Mo Salah.

Also, Jones is very good at emptying the space for others and dragging defenders’ attention to himself while opening the progressive passing lanes for his teammates. Once again, those runs happen from the inward positions where he goes for the move towards the flank clearing the room in the half-space for deeper teammates to exploit, as the defender commonly goes after him. 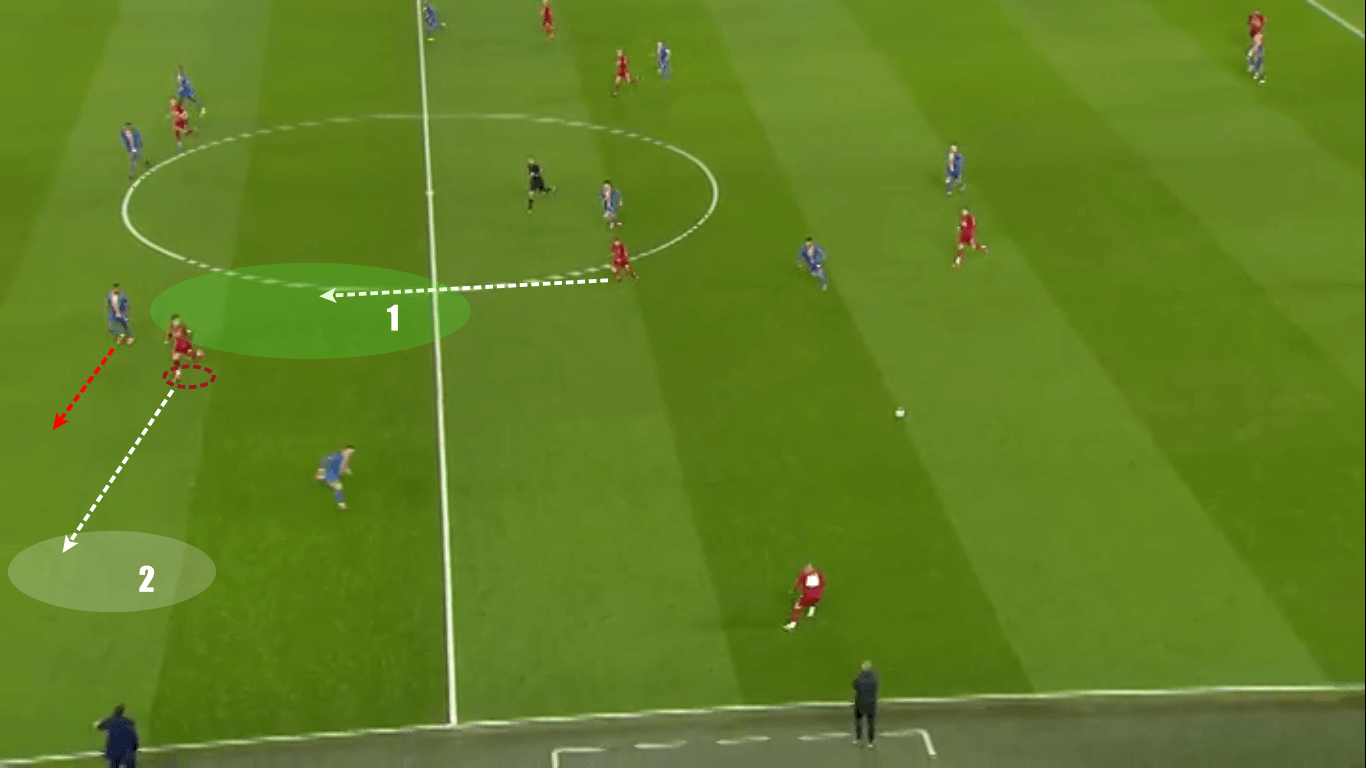 In the situation shown above, we can notice how the wide defender has two options to make the action progress, which is mostly because of Jones’ good movement. If the defender decides to stay central, Jones would get the ball on the flank and repeat the action he does when he runs behind the full-back. He is comfortable when dribbling, although that isn’t always his first option.

Since Liverpool is the prototype of a counter-pressing team, it is clear that the midfielders with good pressing skills could easily adapt to their tactics and could be of great importance for them. Curtis Jones is the guy who bases his defensive inclusion on his aggressiveness and good pro-pressing play, so in those ways, he is a perfect fit for Klopp’s system.

His role is mostly to orient the opposition into the pressing traps with his directed runs and body-positioning, and to provide support to higher players in different areas of the pitch. The duties he will engage depend on the position he is playing in – when he is playing as a winger he will be the first man pressing, and when he is deeper he will play as a supporting player to the high press. 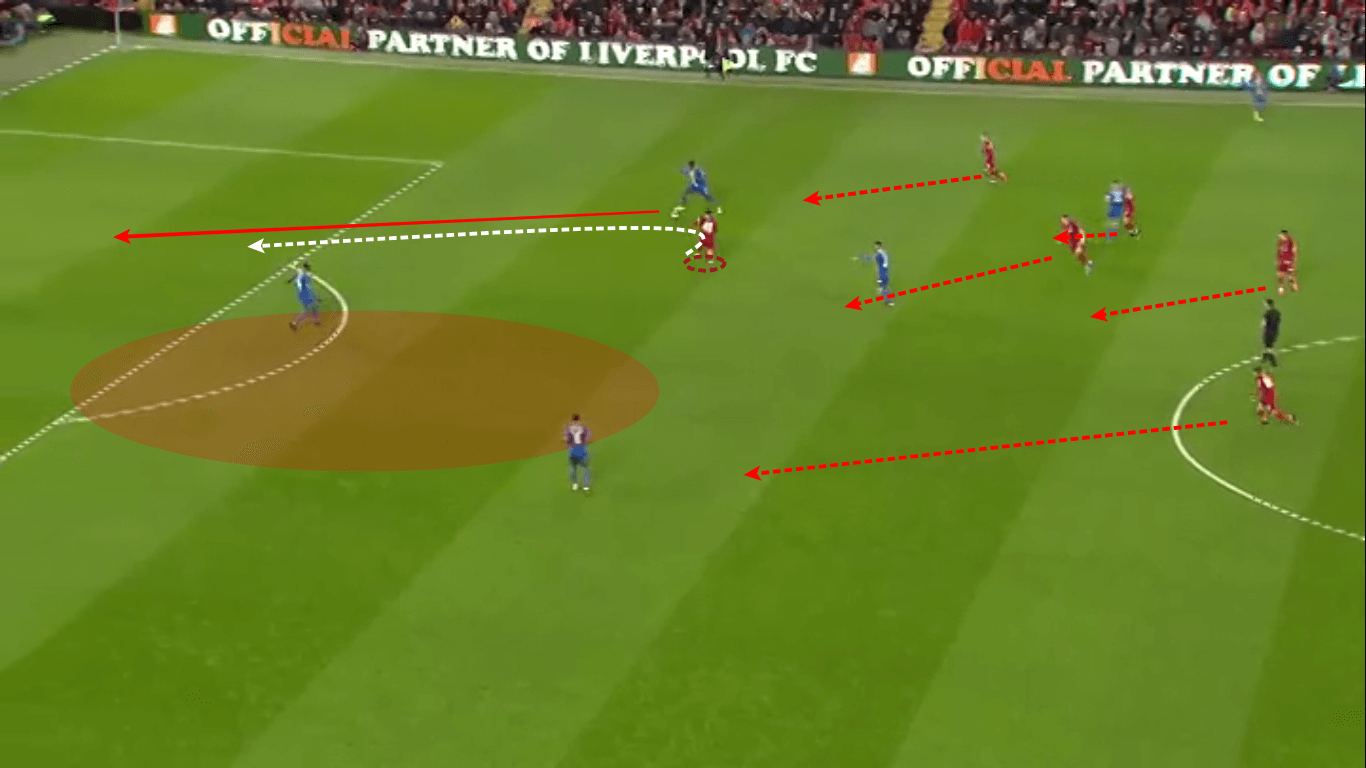 This example from the image shows us the situation where he is set up higher and plays closer to the opposition’s goal. He runs towards the defender under the exact angle that will force him to play it to the goalkeeper, which triggers the press for his team aimed towards the open centre-back, who will be left with no passing options once he gets the ball. Jones is the one who will close the other centre-back and will call his side to come higher due to his aggressive first run.

When positioned deeper, he is the man who secures the numerical advantage in pressing when the opposing team’s midfielder gets the ball from his defender. His well-timed runs are filled with a great amount of aggressiveness and he often comes closer not only to outnumber the opponent but to be the one who tackles and intercepts the passes. 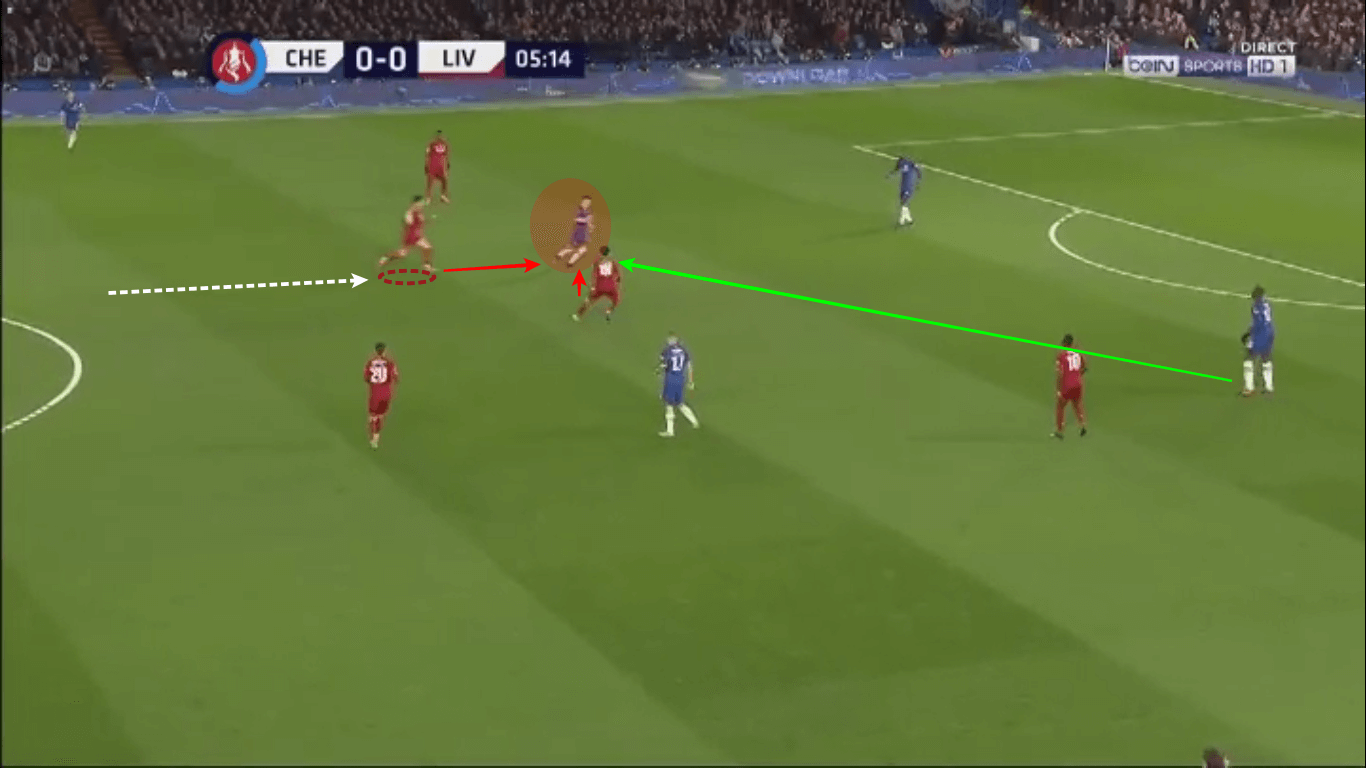 His movement forces the player to play the ball back which disables his rivals’ progressive play and disrupts their initial idea. In those situations, Jones is the one who puts the pressure on the players’ back as he always stays close to the action and helps his wingers and strikers.

In the lower phases of the game, when the opponents are in transition, the main strength of this young midfielder is his brilliant negative transition ability. He repeats good backwards runs in order to cover his full-back and close down the potential runs in behind from players in the opposition’s midfield positions. 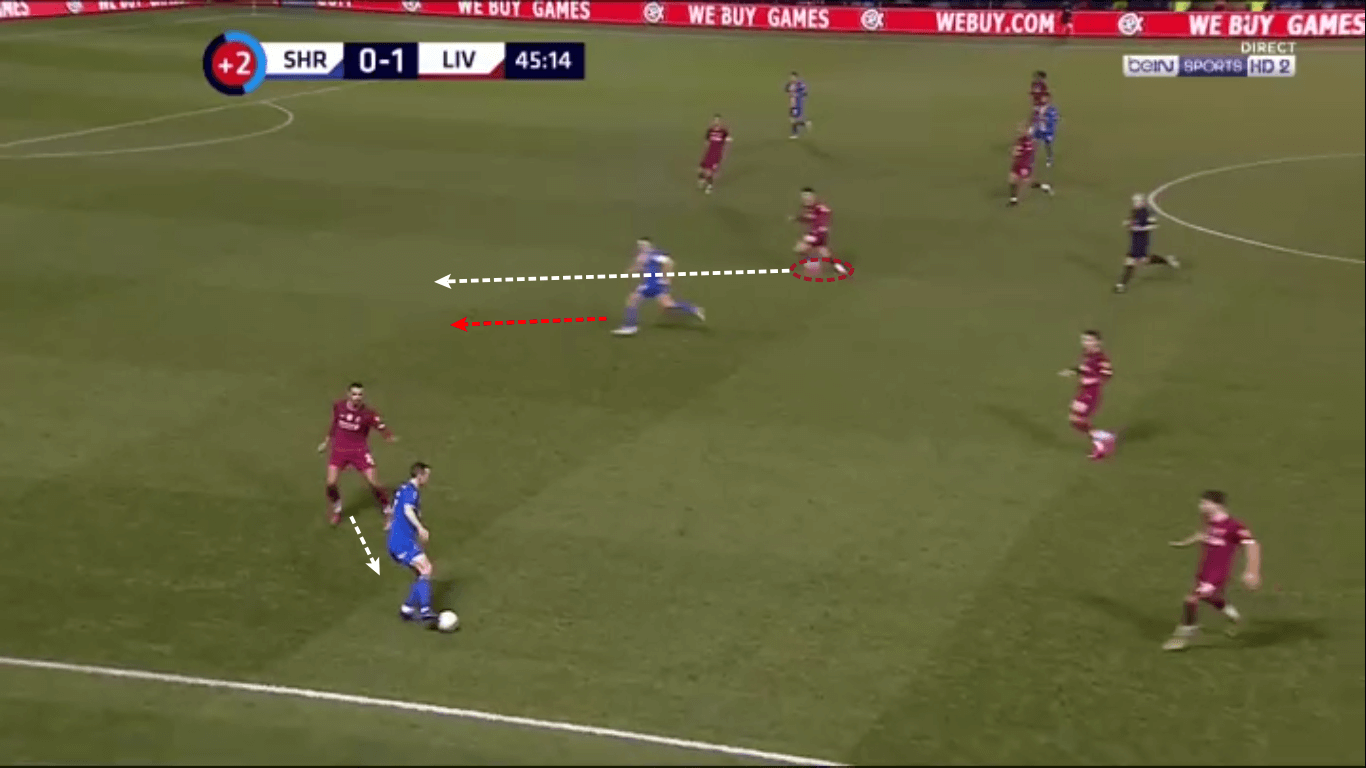 As we can see, he can be seen as a covering player in these situations, which could be of great importance for Klopp, especially when his initial pressing is broken and the team needs to go into defensive transitions.

Curtis Jones is surely one of Liverpool’s key players for the future. He is the embodiment of modern two-way football and has all the skills to succeed as a versatile midfielder. His decision-making and technical abilities point out that he could be one of the successors in the midfield that the Reds currently have, and that he can also possibly bring them to a higher level when it comes to the game between the lines.

This analysis shows what he can mean to Jürgen Klopp’s tactics in the upcoming years in terms of keeping the high composure the team has and playing in the style that the German coach prefers. If he continues to develop in the same manner he did from the start of this season, he will easily become an important part of Liverpool’s system, starting from the next season.

My name is Marko Jović and I come from Serbia, counting 23 years at the moment. I would rather be the guy that searches for his "one in a million" luck than to work "sure things" just to be mediocre. Football addict and football expert - I know what I write, I write what I know.