Having players quickly react to a loss of possession is an issue that can plight even teams at the highest level in the game. When coaching this aspect of the game it is often useful to constantly have transition moments throughout other sessions, where defensive transition can be a sub-focus in a session on building out from the back, for example.

However, those incredibly efficient counter-pressing sides like Liverpool will often position players in their attacking phase where they are ready to move instantly into the defensive transition phase. If anything they are already in defensive transition when they have the ball, anticipating the loss of possession and ready to move into specific areas as soon as the ball is lost.

Using counter-pressing in defensive transition can be highly useful for a number of reasons. Firstly, if you are a possession side, then you want the ball as often as possible. Therefore, upon a loss of possession, it makes sense to regain the ball as quickly as you can, rather than dropping back into a deeper defensive shape. However, as Jurgen Klopp is often quoted as saying, it can be used as a playmaker. Teams may turnover possession strategically in certain areas of the pitch before using their players in the immediate vicinity to press, win the ball, and now attack quickly as the opponent has transitioned into attack, leaving them open to a direct attack through the centre of the pitch.

Finally, it can also just be a highly useful approach to prevent a counter-attack. By providing pressure around the ball it can delay an attack, preventing the opponent from immediately being able to play through the centre of the pitch, and the intensity of the counter-press can provide time for defenders further away from the ball to get back into shape and protect the central channel. Depending on your own philosophy and game model, your emphasis on this moment may be slightly different, so the practices suggested in the article, as well as game model, can of course be tailored to suit your needs.

Defensive transition cannot be effective if we don’t understand how to prevent the opponent from breaking away from our counter-press and entering into the attacking phase.

A good primer activity can be something like a 6v2 or 6v3 rondo, where when one of the two defenders wins the ball they look to dribble out of the square. They can combine or go alone, however, if the attacking team can prevent them from doing this, then they have to continue as defenders.

The area should be made wide enough to give the defending team a decent chance of achieving this, whilst passes along the width of the grid, as shown below, can be can be stopped to ensure the defensive duo stands a chance in this wider area, and of course we can therefore force more turnovers.

We want to initially approach the idea of having players immediately react to a loss of possession by pressing the ball and we can offer it out to the players to decide on which players should be doing this (they will often settle on the person who lost the ball and the next closest player).

We can then build this into a bigger positional game, and with this example, we have used a 4v4 + 5, but it can vary based on numbers and the quality of the playing group, whilst size-wise, in order to give us a chance to counter-press effectively, we don’t want this area to be too big. Generally somewhere in the region of a 16×16 or 20×20 will suffice. There are four bounce players around the edge of the pitch, and in order to ensure they can’t just easily switch play we can put these players on one or two touch limits where they provide the option to bounce the ball too but aren’t going to always break lines. There is also a central neutral player. This player will always provide that central passing line option for the attacking transition team, representing the forward pass we most definitely don’t want to allow the opponent to find. 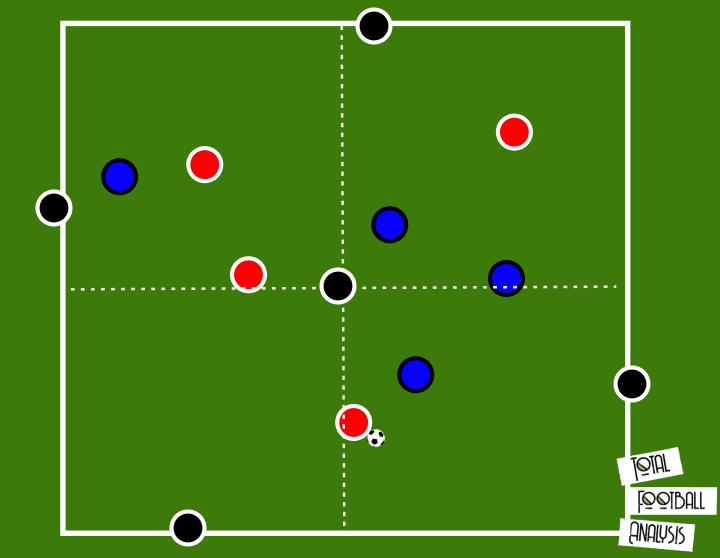 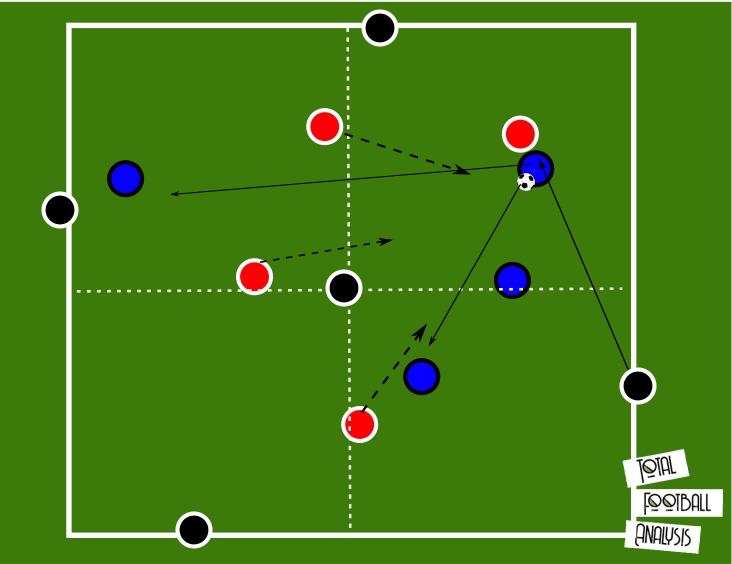 Not only do we want pressure on the ball, but players further away from the ball should look to not only support their team around the ball, getting as close to, if not inside the square the ball has been lost in, but also protecting passing lines, and looking to step forward to cover any easy passes the player in possession may have.

Following on from this practice we can then move onto a 6v6 +3, or something similar. This positional game is an excellent way to continue to develop defensive transition principles and builds on nicely from our previous exercise. We can see the set-up in the image below with four goals positioned around the outside of the pitch. 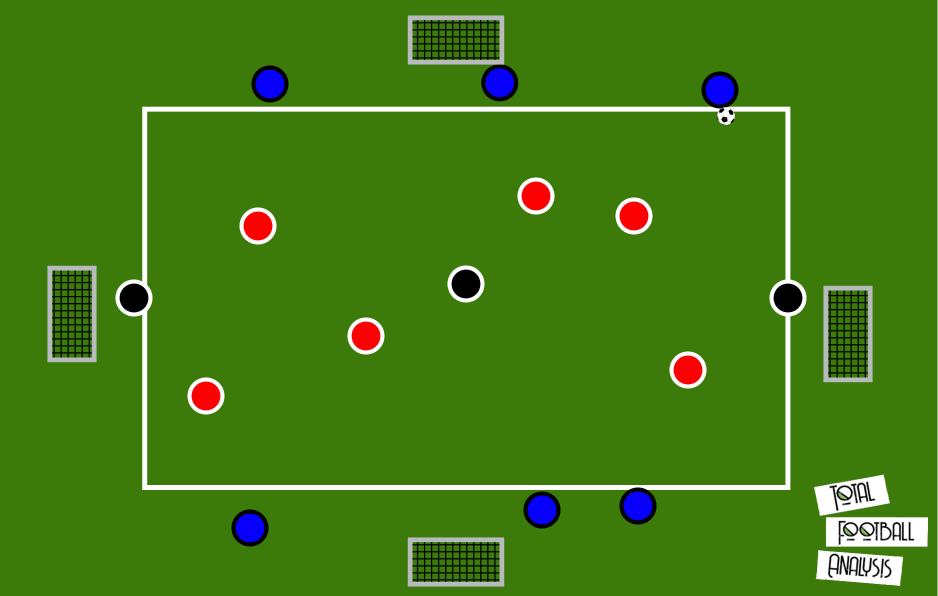 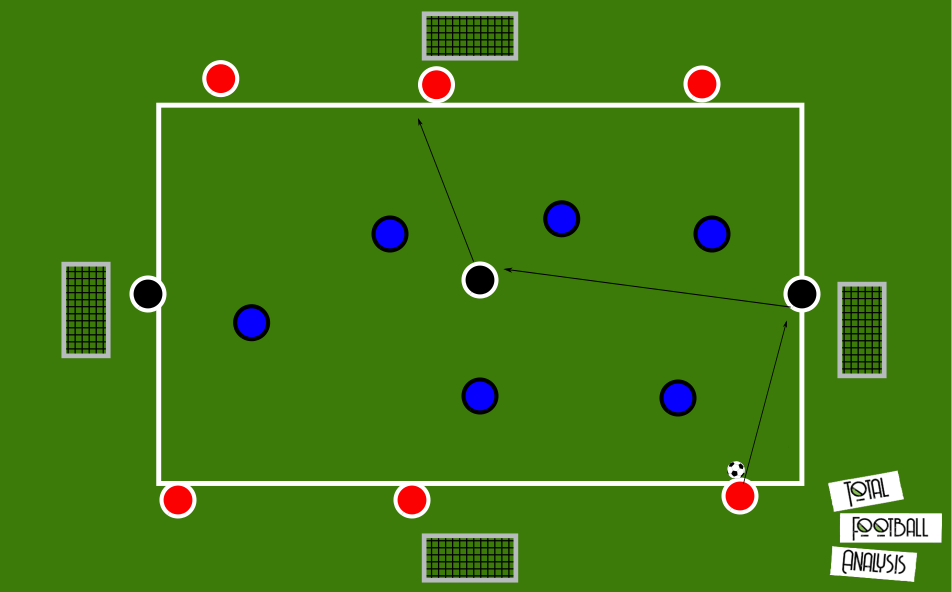 Once the ball is turned over the red team in this instance look to counter-press and the blue team look to transition out towards the edge of the pitch. 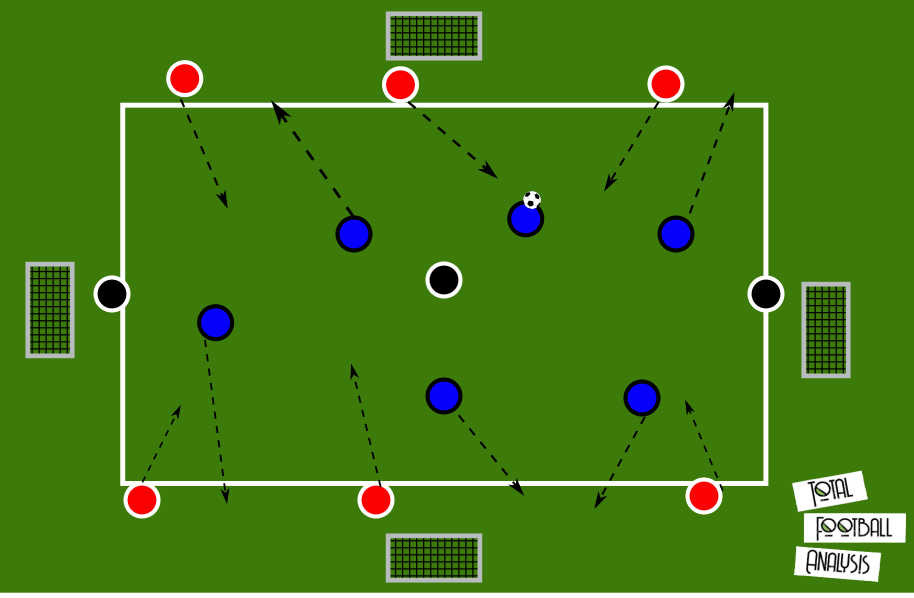 What we are looking for is firstly to continue seeing a speed of reaction from the team in defensive transition.

However, we can use this practice as a way to fine-tune the defensive transition process. In order to do this the team in attacking transition have the opportunity to score in one of the four mini-goals within the first five seconds. If they can do this they instantly get a goal, and then get the ball back with them now attacking, where they can seek to score another goal by connecting passes once more.

This immediate option to score should prompt the team in defensive transition to react quickly first of all to the loss of possession. However, whilst we want pressure around the ball, we are looking for the players further away from the action to still affect the play. They can do this by covering the other goals away from the loss of possession. Goals should be positioned at least five yards away from the field so players can’t just stand in front of the goal and block it, and instead are forced to use their positioning to shield the goal.

As a group the team in defensive transition should look to come to a solution together. For example, below we can see that the three closest players to the loss of possession are counter-pressing whilst the other players, still step into the grid but are looking to block the other three goals available to the opponent. 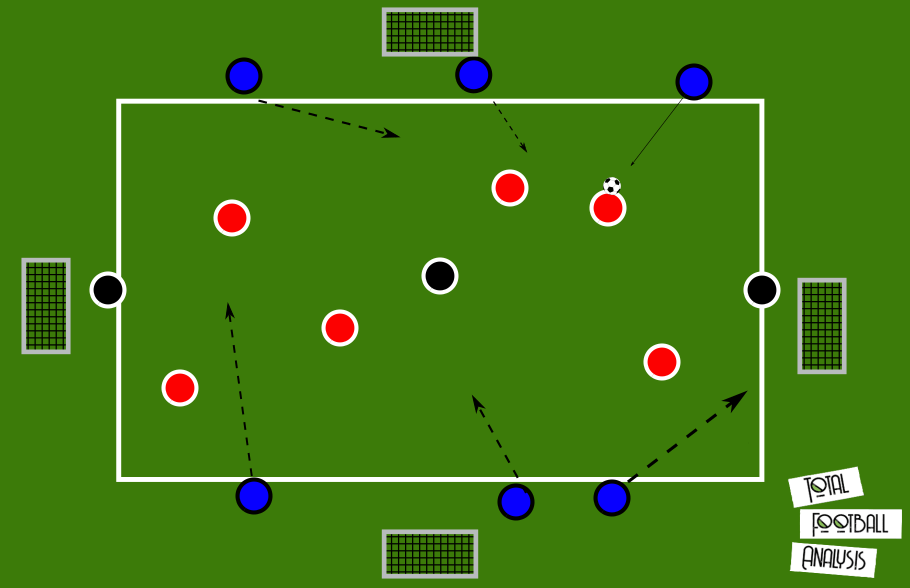 Finally we can move onto an even more game realistic situation, using a slightly narrower pitch, to give us a good chance of counter-pressing effectively from slightly wider positions.

The blue team in this example will be the focus side and they enjoy an outfield overload of 7v6, but the goalkeeper should be encouraged to be an active participant in possession to make it an even more favourable 8v6 overload. 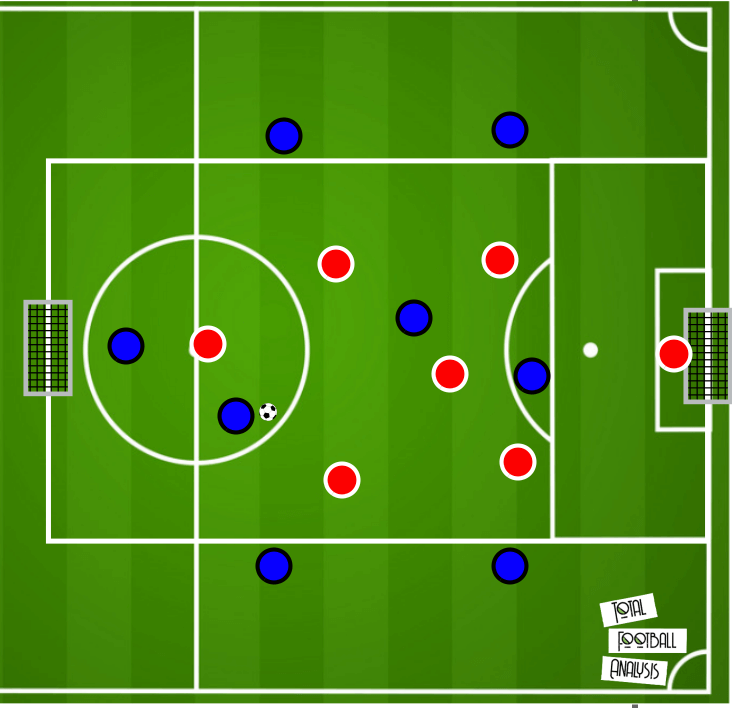 We are looking for the possession team to connect, using outside players, who should be encouraged to play on two touches as a maximum, but three is acceptable if it is fully necessary. We will prevent our outside players from playing a pass down the line, so the pass must come inside, to make it a challenge for them to progress the ball.

If a cross is coming in from one side then the winger on the far side can move into the area to attack the ball as they would do in a game. 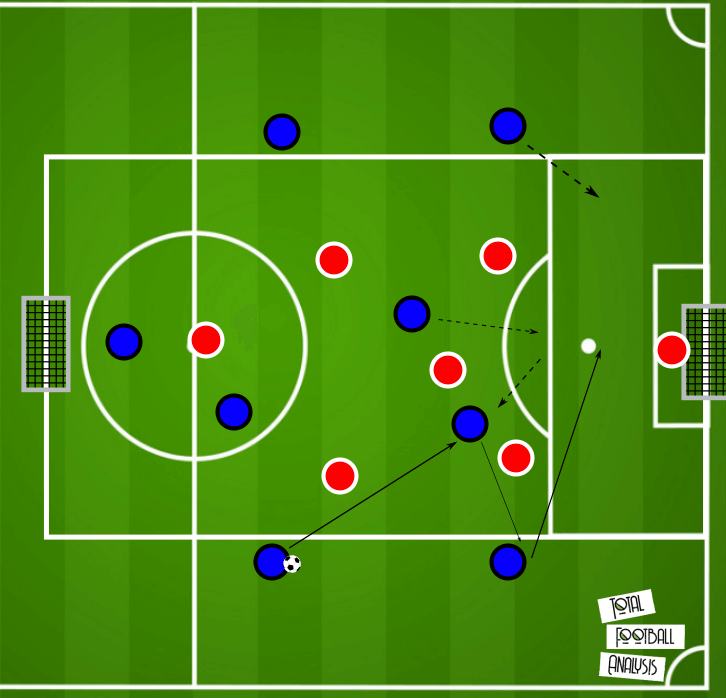 If the red team win possession they can be given a time limit from within which they must score. Eight seconds is plenty of time for them to combine and work the ball towards the opposition goal. 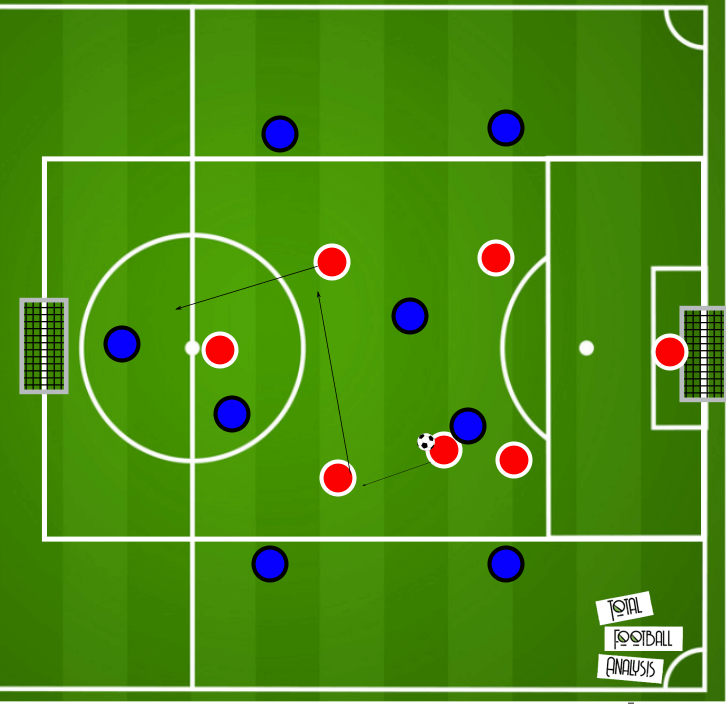 However, building on our session we will allow the outside players to now move inside in order to get compact and counter-press when necessary. 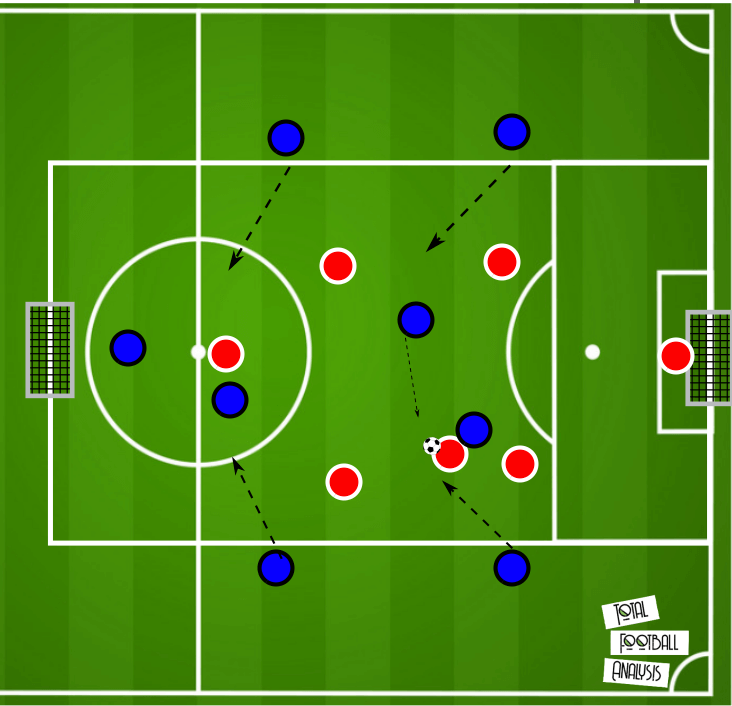 Once they win the ball they will then move into attacking transition and move back to their wide positions, just like they did in the previous practice.

This practice builds on seamlessly from the designs of our other practices in this session and will allow them to put this defensive transition work into a game context.

As already mentioned, if we can have defensive transition moments occurring throughout practices building on other aspects of our game model, where players begin to see this as part of the attacking phase, it will become more seamless and less separated tactically. However, it is important to have players understand some key basics of what you want to see from them in this moment of the game first – and once they fully understand what is expected from them after a loss of possession we can begin to ingrain this in them through continued repetition and reinforcement.