“Attack wins you games, defence wins you titles.” This infamous quote from the great Sir Alex Ferguson has become somewhat of a timeless proverb in British football culture. A statement so conspicuous yet so palpably true, the Scot’s words are practically indisputable.

Scoring goals is like crafting a beautiful wooden coffee table while defending is like the coating of varnish. Without it, there’s no longevity. At Rotherham United, Paul Warne has certainly coated the team with some durable varnish.

This season, while the Millers challenge for their third promotion from League One under the club legend, sitting top of the table by six points, Rotherham have conceded merely 18 goals in 29 matches.

In fact, Rotherham hold the joint-second best defensive record across the top four tiers of English football with only Manchester City bettering it with all their exorbitant might.

Warne’s side are the joint-top goalscorers in the English third division but, referring back to Sir Alex Ferguson’s notorious quote, it’s the team’s defensive proficiency that has rocketed them to title favouritism. But how exactly are Rotherham so good defensively?

This article will be a tactical analysis of the Millers in the form of a team scout report. It will be an analysis of the side’s tactics, dissecting Warne’s strategic set-up in the defensive phases.

During Rotherham’s failed quest for Championship survival last season, Warne sifted through a plethora of formations in order to find the one which would give the Millers the best chance to stave off relegation. The 3-5-2 was Rotherham’s most frequent formation choice last season, being used in roughly a quarter of their games in all competitions. Looking at the visual above, it would seem that Warne deployed every formation known to man in the hopes of guiding his side to safety.

Unfortunately, Rotherham were eventually relegated, but a step down the English tier system has allowed the team to finally have some consistency with their formation choice.

It was clear from last season that Warne’s preferred system is the 3-5-2 but the 49-year-old manager was forced to constantly change the side’s shape when it wasn’t working. Now though, given Rotherham’s immaculate position at the summit of the third division, Warne can finally employ his favoured 3-5-2 regularly.

The Millers have used this system in 69 percent of games so far in the current campaign in all competitions.

The only time the formation has been slightly different is if the head coach decides to push one midfielder further forward as a number ‘10’ behind a double-pivot. Although, since Kieran Sadlier’s departure to Bolton Wanderers in January, after a largely unsuccessful 18-month stint at the AESSEAL New York Stadium, the 3-4-1-2 will perhaps be a rare sight for the rest of the season.

Last season, Rotherham had one of the lowest Passes allowed Per Defensive Action rates in the entire English football pyramid which was highly impressive given the lack of quality and depth within the squad in comparison to teams in the Premier League and even higher up in the Championship.

A non-negotiable in Warne’s tactical ideology is pressing from the front, and so this season Rotherham certainly haven’t let up. The Millers have been back, pressing better and more efficiently than ever. 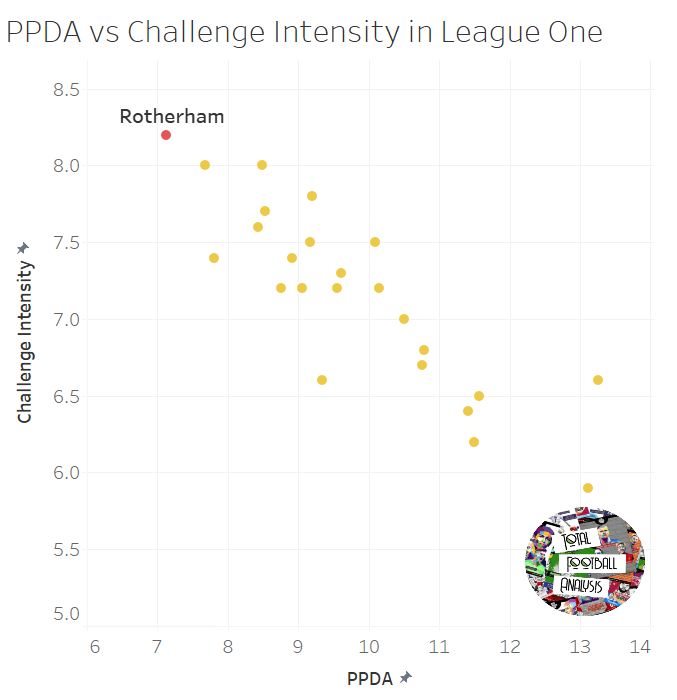 Rotherham’s PPDA this season in League One currently stands at 7.12 which is, yet again, the lowest in the division. This is apparent from the graph above. The lower the PPDA, the less time a team allows the opposition to have on the ball.

What is also very telling from the graph is that Rotherham United possess the highest challenge intensity in the league too – 8.2 to be precise. Challenge intensity is a metric designed to measure how actively a team is seeking to recover the ball by quantifying how many defensive actions (defensive duels, loose ball duels, interceptions, tackles) they make every minute that the opposition has the ball.

The PPDA and challenge intensity tells us that Rotherham are actively seeking the ball, pressing high up the pitch, and are actually pretty good at it too, scoring twice from high pressing sequences.

But what methods, in particular, are applied by Rotherham in a high-block that have made their pressing so effective?

Rotherham press in a man-oriented system. Essentially, this entails each player being given a designated man to mark and apply pressure to in the high block. This can change on a game-to-game basis depending on the opposition on the day and their shape in possession. Some teams build out from the back with a three, while some choose a four-man backline. 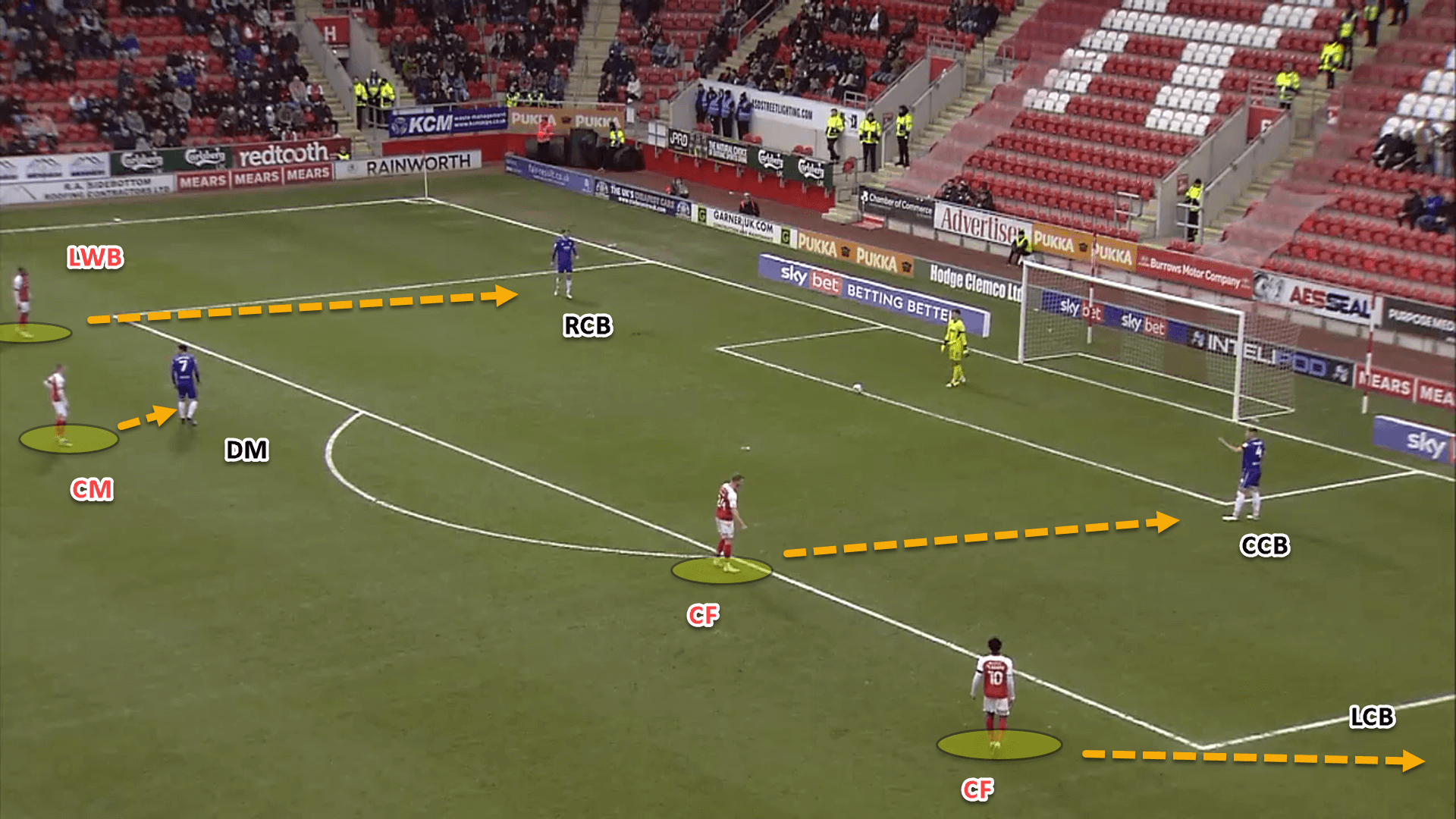 Their pressing structure, while being man-oriented, can be quite intriguing and unconventional. For instance, in this situation, Rotherham are pressing rather peculiarly.

The two centre-forwards in their 3-5-2 are occupying two of the Cheltenham Town centre-backs. This leaves the third central defender free. Instead of putting a midfielder on him, Warne has instructed Rotherham’s left wingback Mickel Miller to push up high to press the right centre-back.

As Miller has moved up to press, leaving space on the left flank, Rotherham’s left centre-back has drifted across to cover the gap. 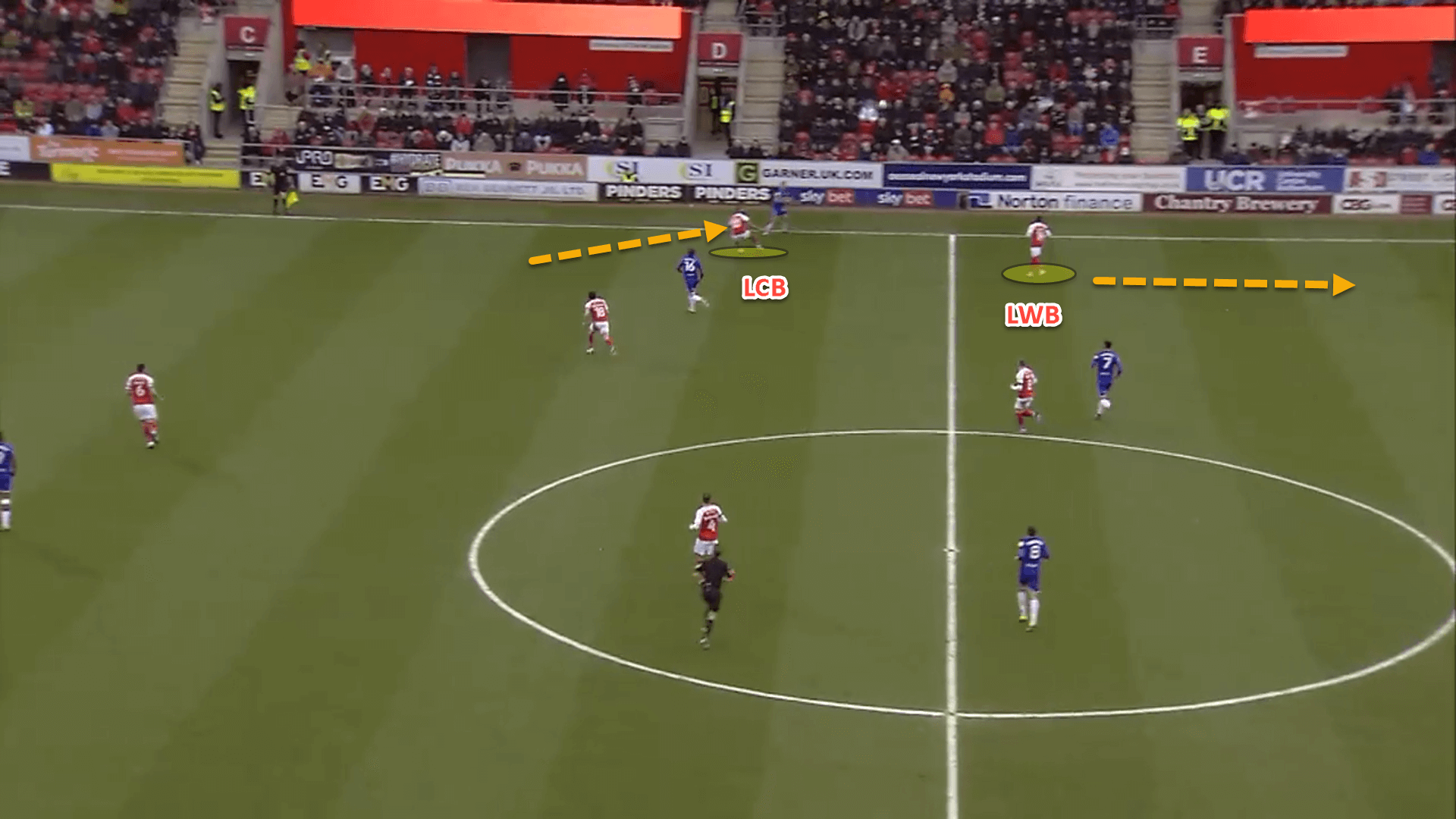 A lot of teams that go man-for-man in the press are quite lenient with regards to central midfielders instead of being so dogged with their man-marking. The deepest midfielder, in particular, is generally given license to play more zonally in front of the backline.

However, Warne wants his central midfielders to be persevering and to follow their men around during this defensive phase, even into deep areas of the pitch which can be dangerous. 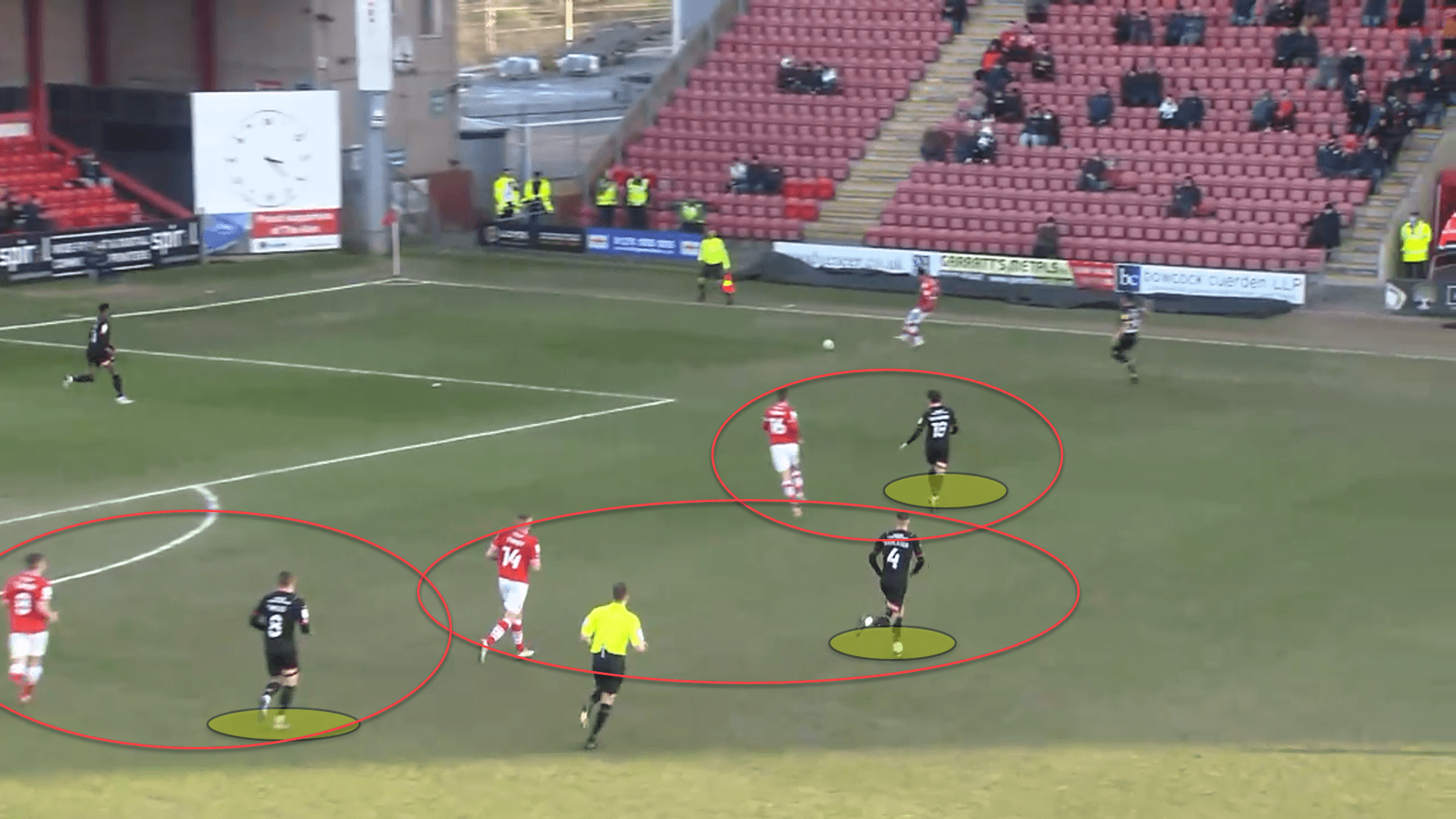 The reason this can be potentially detrimental to the side is if the opposition drop their central midfielders low to receive the ball from the defenders. The attacking side can bait their markers to follow them and then simply go long to play over the press.

To combat this, the centre-backs need to be very aggressive when challenging for aerial balls, coming way off the defensive line to compete in the air and close down any players that are receiving the ball in the space behind Rotherham’s midfield.

Generally, the central centre-back is the man tasked with being excessively aggressive, while the remaining two drop off to cover the space behind him so that runners can’t exploit the gap he leaves. 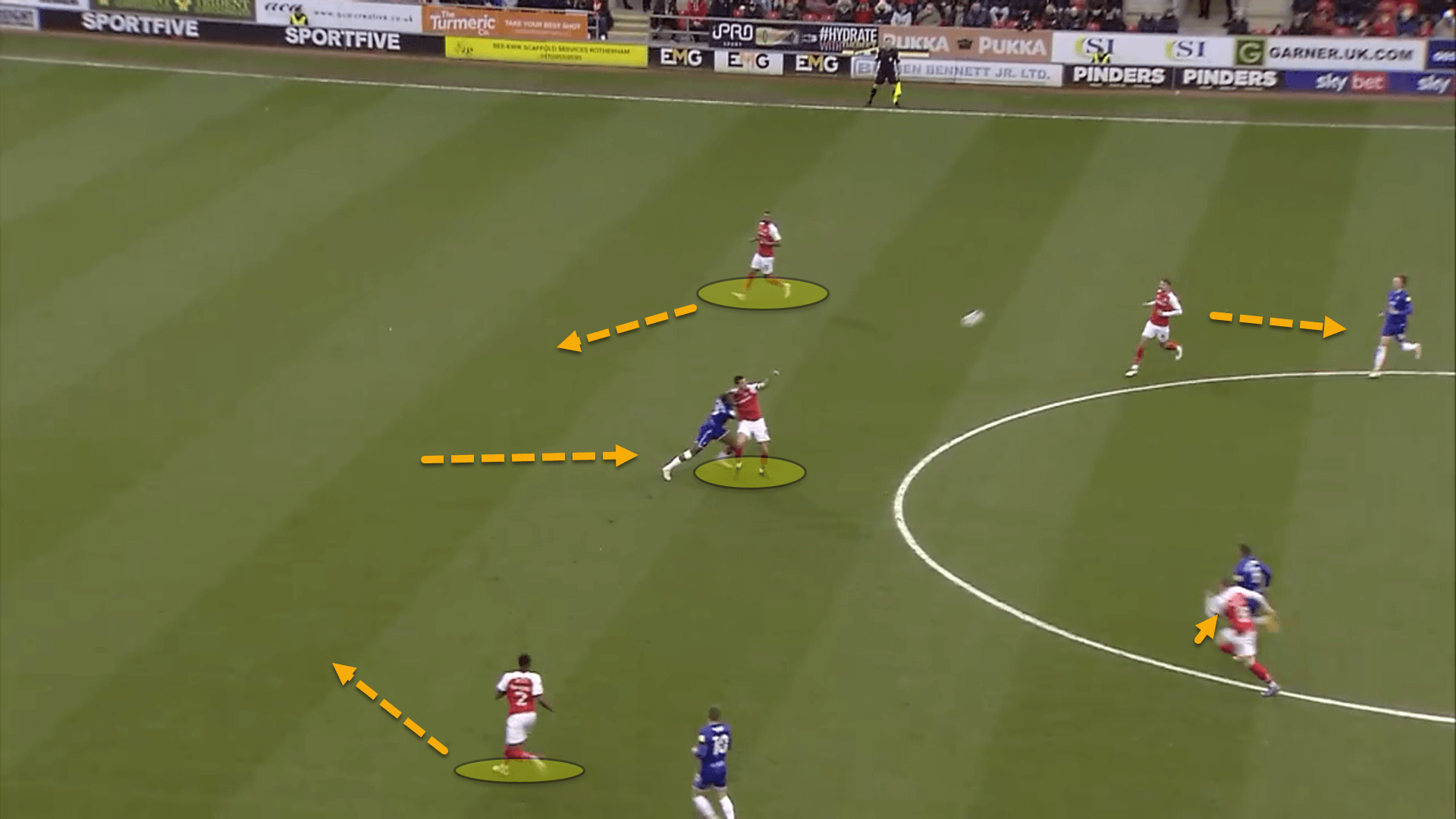 Richard Wood has been the most frequently used central centre-back by Warne. The head coach has massive faith in the 36-year-old to be aggressive and strong in his aerial duels. Wood’s 6ft 3, 180lbs frame makes him an ideal option to constantly compete in the air with opposition strikers and has won 57 percent of his duels this season so far.

Rotherham’s high press isn’t as exotic or eccentric as a team like Leeds United, Atalanta or even Torino but it’s absolutely efficient and the players have been given clearly defined roles which they all optimally execute – a credit to the hard work done on the training ground by the entire squad and coaching staff.

One major attribute most excellent defensive sides have is the ability to negate the attacking team from the central corridors and steer them wide.

This is done so to take advantage of the full limitations of the pitch’s dimensions. By forcing the attacking team wide, the side that are defending can use the touchline as an extra defender and set traps, trying to regain the ball.

In the centre of the pitch, the ball-carrier can play in all directions but out wide they are limited because of the side-line. 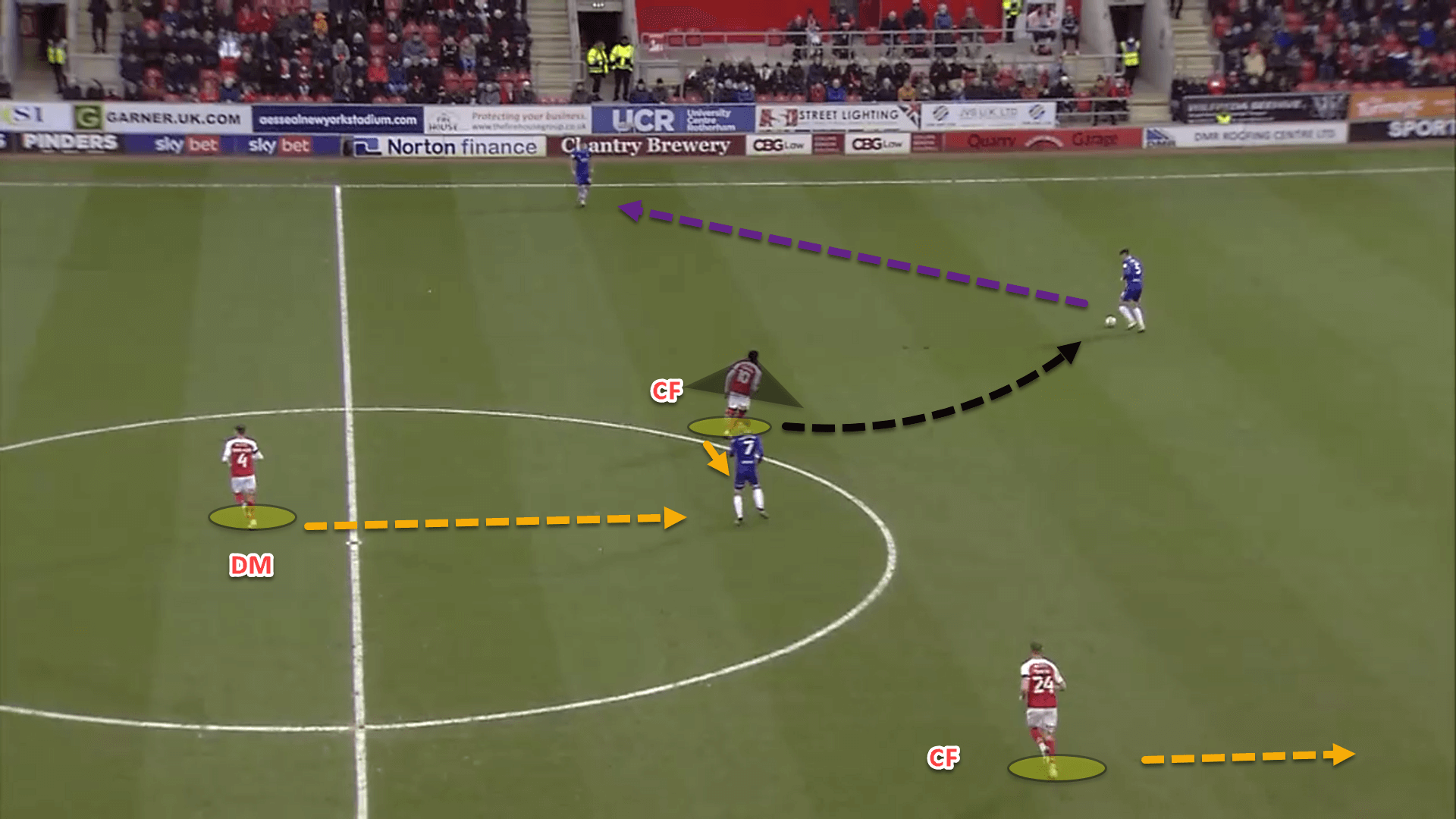 Directing the defensive side out to the flanks requires the pressing players to shape their pressure, cutting off inside passing lanes while also leaving the opponent’s wide-men free.

When the ball is played out to the sides, Rotherham apply pressing traps to try and win back the ball as quickly as possible and in unison, while availing of the touchline as an extra defender. 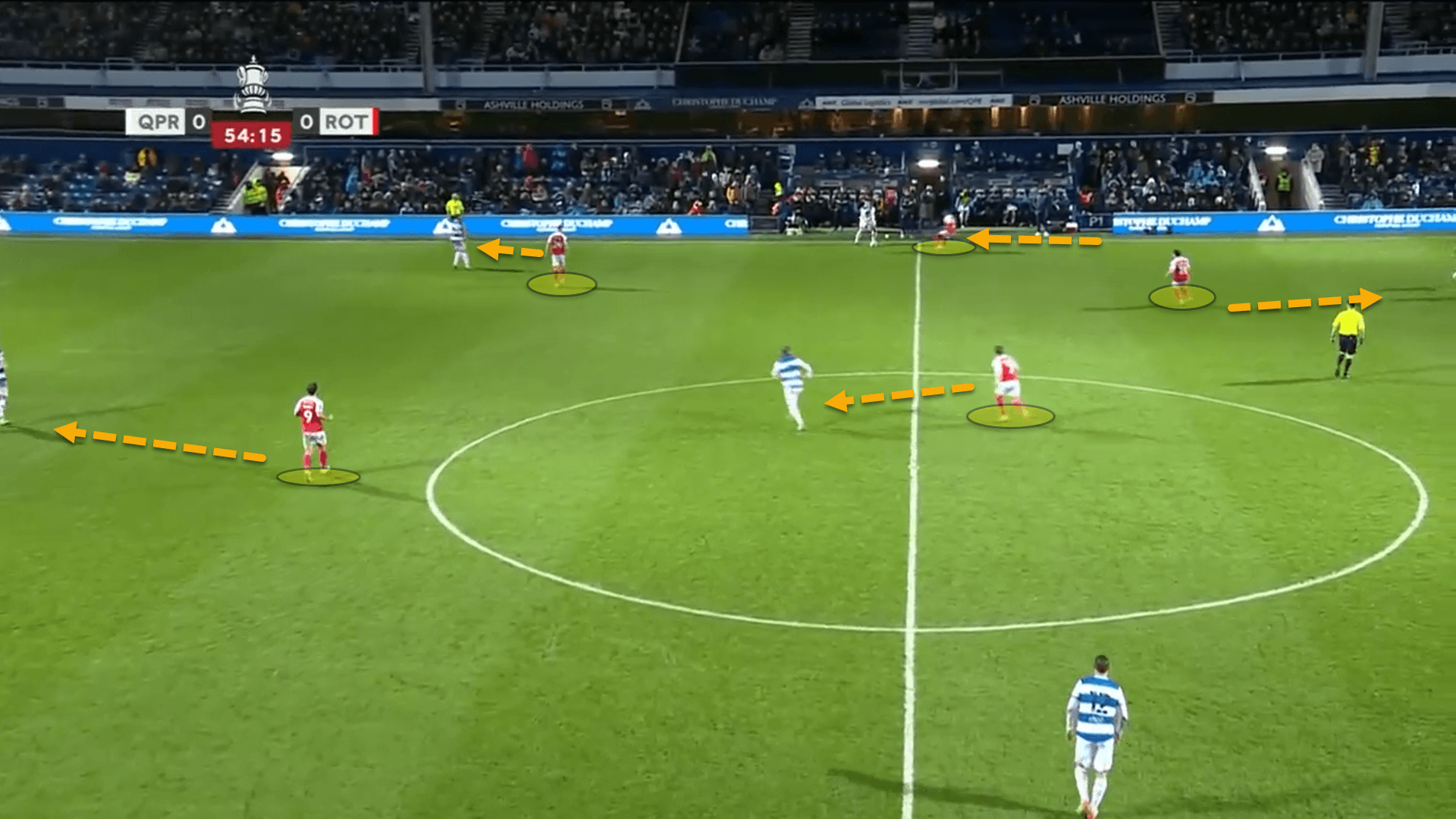 In true pressing trap fashion, Rotherham close down all the nearest passing options while also applying pressure to the player on the ball. When applied correctly, this will: cause the ball-carrier to either play a negative pass by going backwards; make a risky pass where the defending team have a wonderful opportunity to win the ball; cause the player on the ball to cede possession to the man applying pressure.

One of the best teams in world football at executing wide pressing traps is La Liga’s enthralling giants Athletic Club. Marcelino Toral’s team are a wonderful blueprint for how to set and trigger pressing traps. 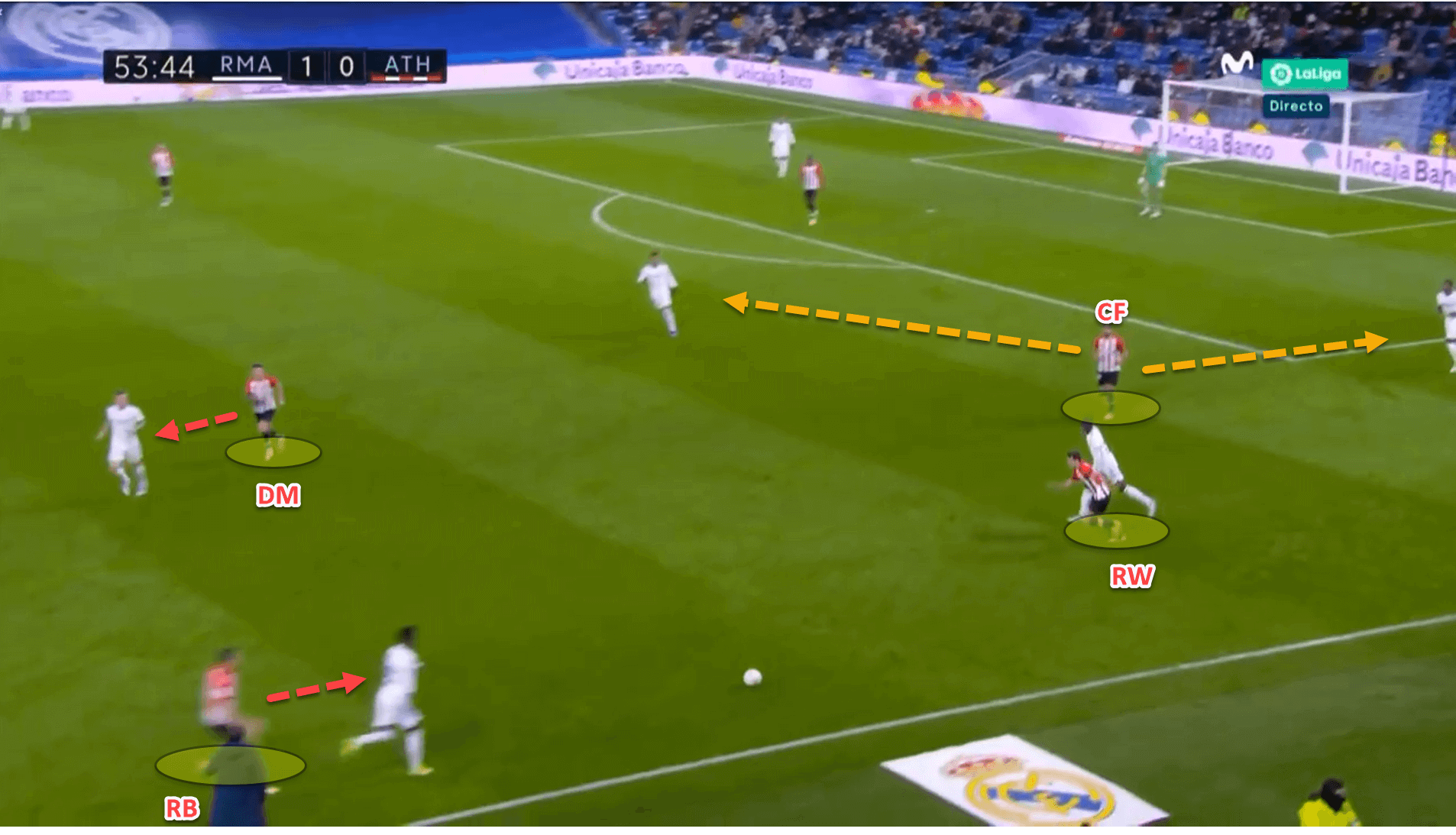 The key to the Basque club’s efficiency in wide traps is aggression, purpose and coordination. Fortunately, despite the monumental gulf in terms of the quality of players at the disposal of the two managers of each team, Rotherham possess all the same glorious traits when applying their pressing traps.

Another key principle to ensuring that their attempts to win the ball on the flanks are successful seems rather simplistic, but the players must be solid in their defensive duels. And good at this Rotherham certainly are.

The Millers compete in an average of 68.78 defensive duels per 90 this season, with most occurring in the wide areas. Rotherham are currently boasting a 61 percent success rate in their duels. Here is an example of all 66 of Rotherham’s defensive duels from a recent FA Cup fixture against Championship play-off dreamers Queens Park Rangers. What is abundantly clear from the data visual displayed above is the defensive instructions from the side-line.

85 percent of their defensive duels were down the flanks compared to just 15 percent in the central areas. Deny the attacking side any space centrally, force them wide, and trap them with aggression, purpose and coordination – the Marcelino way. Scrap that – the Warne way!

It would be largely incorrect to label Rotherham United as a possession-based side. Having averaged just 50 percent of the ball on average in all competitions this season, they are far from it.

Instead, Warne’s side are actually quite flexible, capable of playing out from the back, going direct, or even sitting deep and counterattacking. Nonetheless, when the side does have possession of the ball, there is an emphasis from the manager to create wide overloads, quite a common tactical component of Football League sides.

Rotherham do this by pushing the ball-near centre-back forward to sit under the play, forming a big part of the overload. 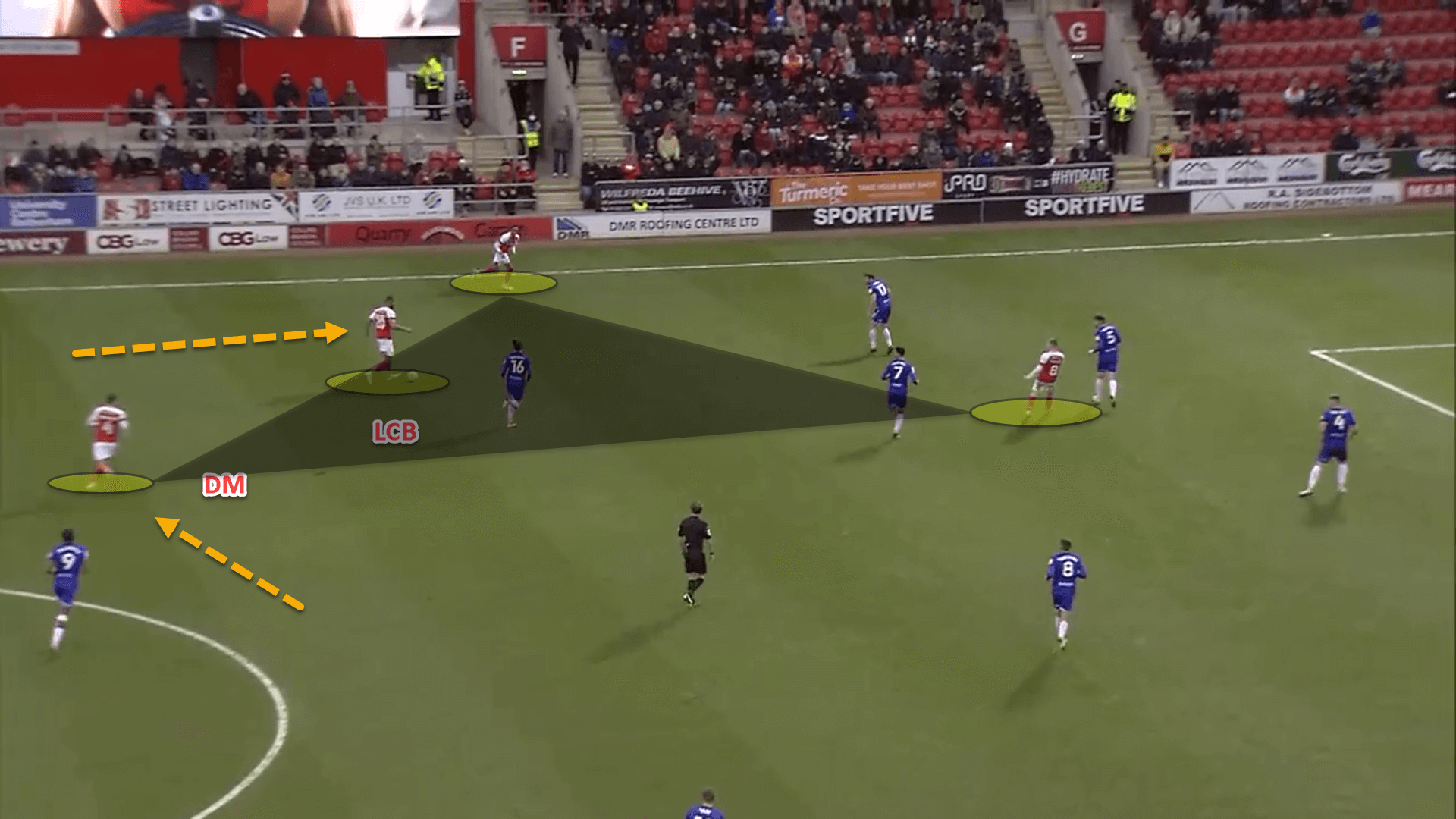 The reason this is a useful, albeit slightly riskier tactic (depending on your perspective of risk), is that it allows them to have an extra player, adept at winning defensive duels, on the flanks to apply pressure in case possession is lost and they need to counterpress. 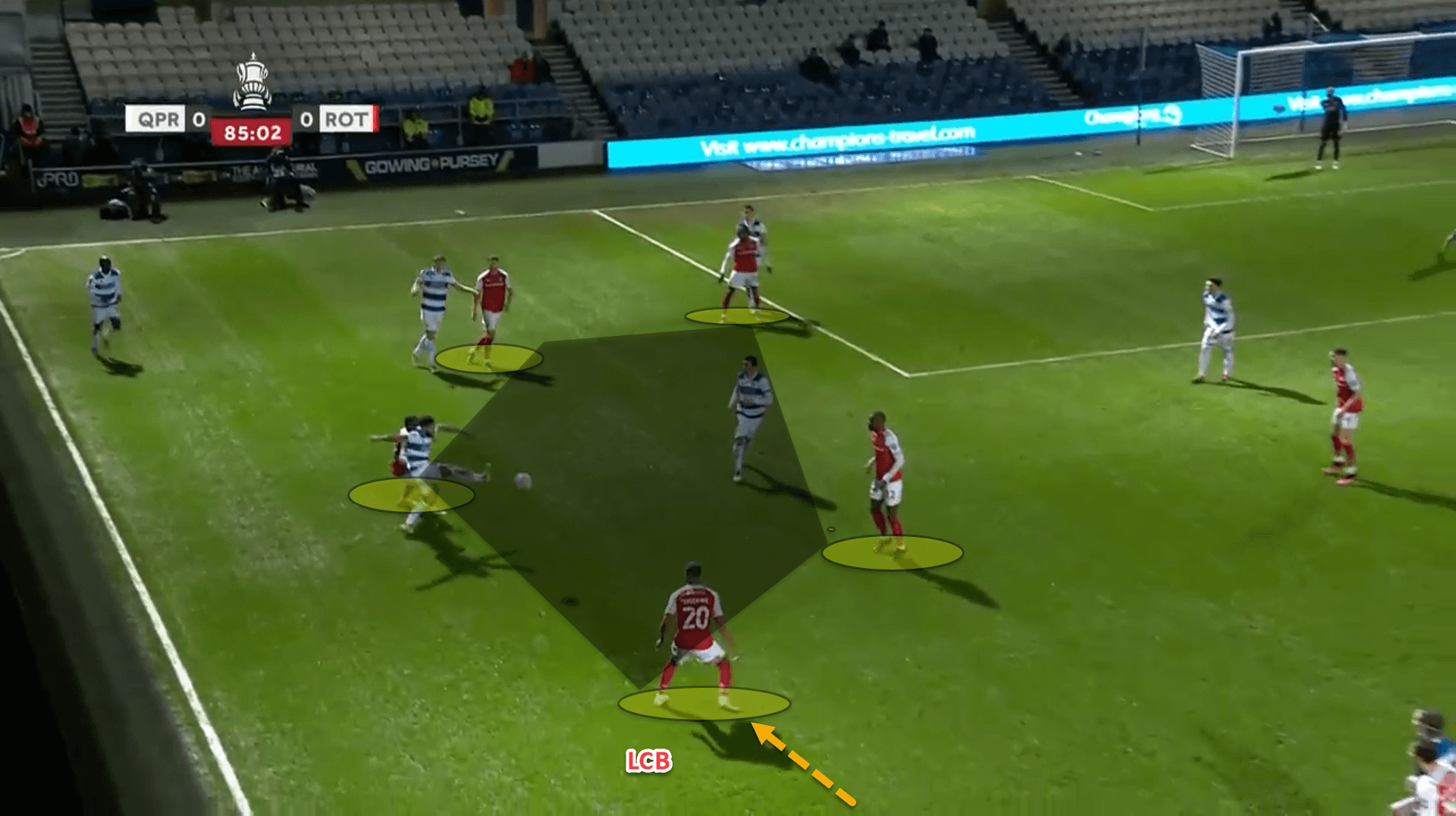 Here is an example of a successfully applied counterpress by Rotherham against QPR. The addition of the wide centre-back to the overload, pushing him high up the pitch, has allowed them to counterpress with numerical superiority, easily winning back possession in a dangerous area.

The main thing that is clear from watching Rotherham’s defensive tactics is just how well-drilled and coherently structured they are, allowing the players to use their own strengths in the defensive phases. This can’t be formulated on its own. The coaches, including Warne, need to take massive credit for their side’s defensive record.

Rotherham are on course for a Championship return, and a first league title victory under the club legend. By the end of the current campaign, the spectacular defensive record will be one of the main reasons, if not the main reason behind their success. Referring back to Sir Alex Ferguson’s quote one final time; “attack wins you games, defence wins you titles.”