Inter are almost neck and neck with Juventus when Serie A has reached its midway point. One interesting development of their season to date is the role played by the 20-year-old defender Alessandro Bastoni. The youngster has been given a real chance to establish himself in the Inter team at the expense of the veteran Diego Godín. That signals a real trust from Antonio Conte, who is not known to field youngsters just for the sake of it. Clearly, Bastoni has something and gives Inter something. That is what this tactical analysis scout report will focus on, namely, why Bastoni is preferred to Godín in Inter’s tactics.

Before looking at Bastoni’s importance to Inter, let’s take a look at his strengths as a player. The 20-year-old is a very intelligent defender who positions himself well, defends in an aggressive, front-foot manner while also offering a lot of quality in possession.

Inter’s defensive approach is flexible between a positionally-orientated and a man-orientated setup. Largely, Inter are positionally-orientated in their own half while pressing in a man-orientated manner. In the image below, we can see an example of Bastoni’s excellent understanding of positional defending. With the ball likely to enter the wide area, he has positioned his feet in a way that allows him to move in every direction depending on what Atalanta’s ball-carrier does. This is something he consistently does very well and which helps him defend space excellently. 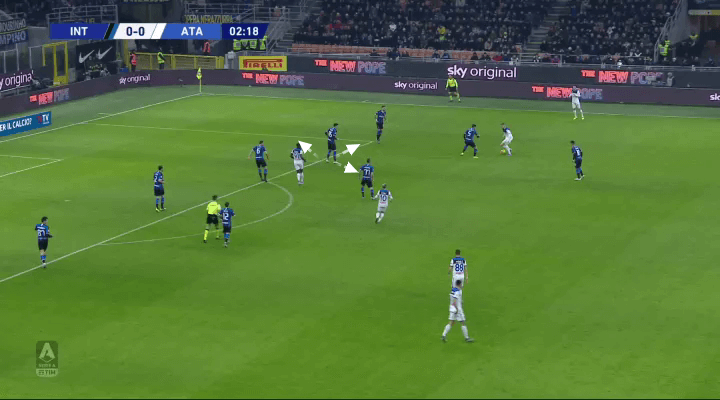 Bastoni is also, as all Inter players, very good at realising when to push, when to drop and when to shuffle across. That understanding in a positional setup is when you move according to the position of the ball and your teammates. In the image below, we can see how Bastoni (yellow) joins his teammates in realising that the Atalanta player is about to play the ball backwards. This helps keep Inter’s shape compact as the ball moves backwards. 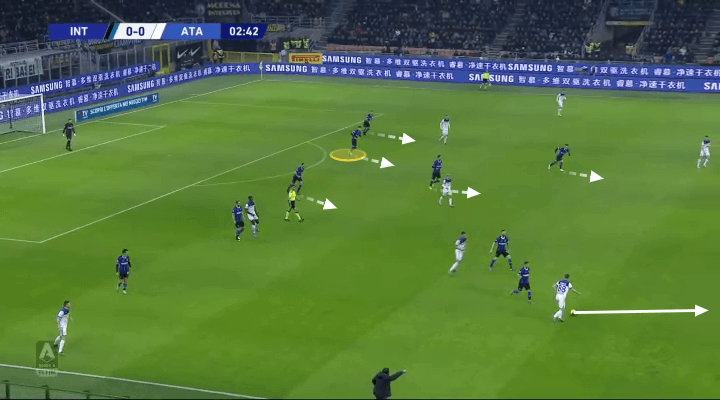 The image below highlights how well Bastoni positions himself even in more chaotic situations. In this situation, the ball happens to end up at Duván Zapata’s feet, and Bastoni quickly reacts by taking a few quick steps and then get really tight and in a position in which he could block an eventual shot from the Colombian. 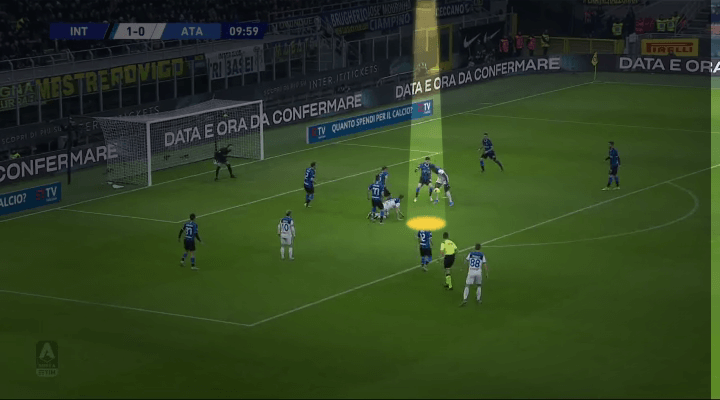 Since Inter often look to press high, Conte needs centre-backs who are prepared to step out of the defensive line to press too. Bastoni fits the bill perfectly. In the image below, we can see how he reads the lofted pass being made into midfield and sprints forward to make a tackle and win the ball for Inter. 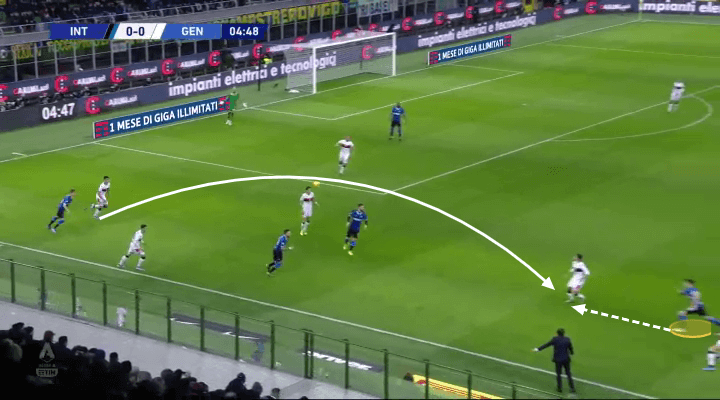 Bastoni’s reading of the game is also a real asset, as seen above and in the image below. Below, he reads the pass being made into the Atalanta player sneaking into the space behind Inter’s midfield. Again, Bastoni is willing to push out of the defensive line to put pressure on the ball. 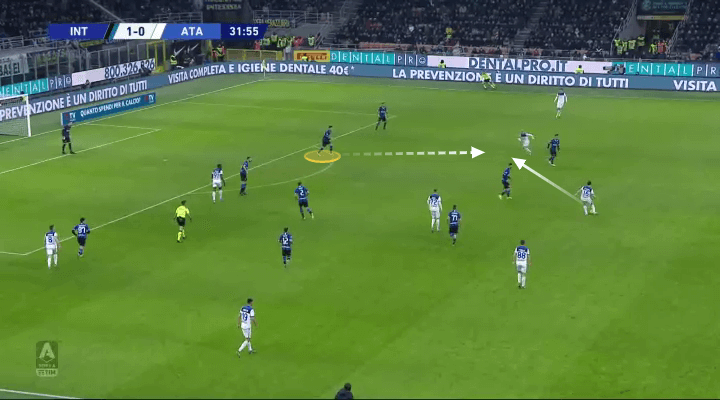 The combination of his spatial understanding and his front-foot defending makes Bastoni an intriguing defensive player. Additionally, he is excellent in 1v1-situations, which was highlighted with his performance against Atalanta when he basically man-marked Josip Iličić, one of Europe’s best dribblers, to great effect. The only real weakness in Bastoni’s defensive game is inexperience, as highlighted by the penalty he conceded against Atalanta when he was a bit too eager to get tight to the opponent.

Coupled with his strong defensive contribution, Bastoni is also excellent in possession. He often plays raking passes that split lines with his left foot. We can see one such example in the image below as Bastoni (yellow) plays the ball into Stefano Sensi in the weak point of Atalanta’s defensive structure. 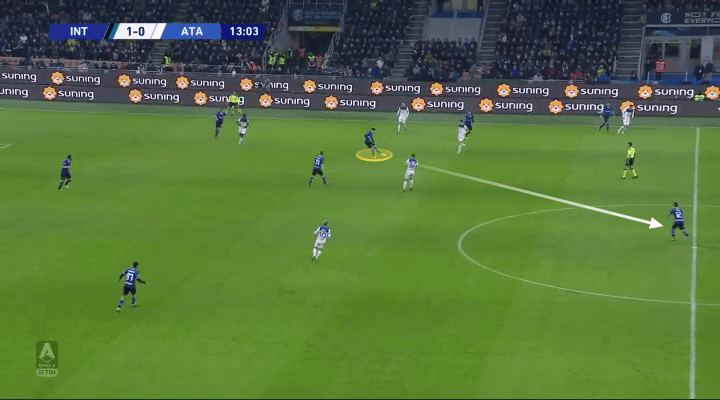 Impressively, Bastoni has also demonstrated an understanding of spaces to fill too. In the image below, he (yellow) pops up in a position behind Atalanta’s midfield after a previous defensive action. Instead of just sprinting back into position, he realised that he could be a pass option for Inter and he receives Brozović’s pass round the corner, turns and progresses the ball. 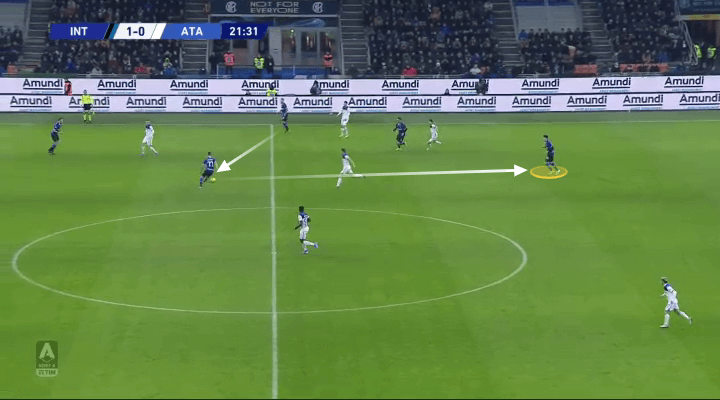 Most importantly, Bastoni understands when to move into spaces to help his teammates move the ball even in difficult situations. In the image below, Bastoni helps Inter escape Atalanta’s aggressive man-marking by moving into the highlighted space. This allows Cristiano Biraghi to simply play the ball into Bastoni’s path to break through Atalanta’s pressing. 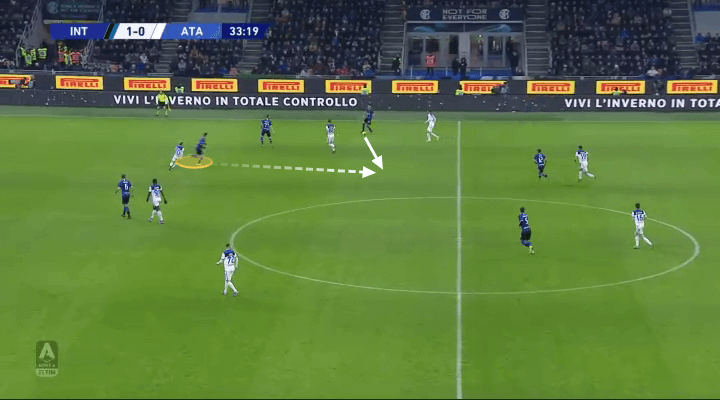 Why Conte uses him over Godín

As we have covered on this site earlier in the season, Inter’s build-up play under Conte is very methodical and always sees them initiate with short passes from the back. Thus, the centre-backs are vital to Inter’s attacking game. The plan is to attract pressure, play through it and then attack the inevitable spaces behind the opposition’s midfield and/or defence.

This is the main reason Bastoni is preferred to Godín. The young Italian is superb in possession and the fact he is left-footed gives Inter an improved balance in their build-up play given that all other centre-backs are right-footed. Thus, the others aren’t as comfortable when pressed outwards as Bastoni obviously is. With his left-foot, Inter open up more of the pitch and he can access areas Godín or Škriniar would not.

We can see this in the image below where Bastoni has just received the ball from the goalkeeper. He is pressed by the Fiorentina player (yellow) but remains calm and spots a run from a teammate behind Fiorentina’s press which he finds and Inter play out from the press. 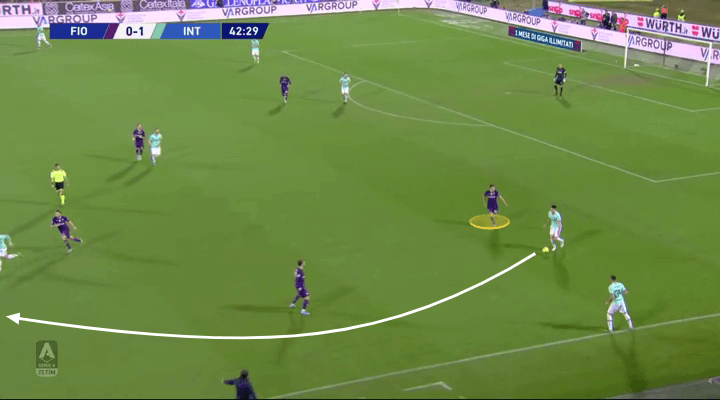 At Chelsea, Conte often used his right-sided centre-back César Azpilicueta to step into midfield when Chelsea were attacking in order to get an extra man in midfield as well as to help out with the counter-pressing when possession was lost. Bastoni is sometimes used in a similar manner.

In the image below, we can see how Bastoni has moved into midfield alongside Marcelo Brozović (white), creating a 2vs1 against the Atalanta midfielder (black). This numerical advantage makes the midfielder hesitant as to who to mark, giving Bastoni time on the ball to progress the attack into the Croatian playmaker. 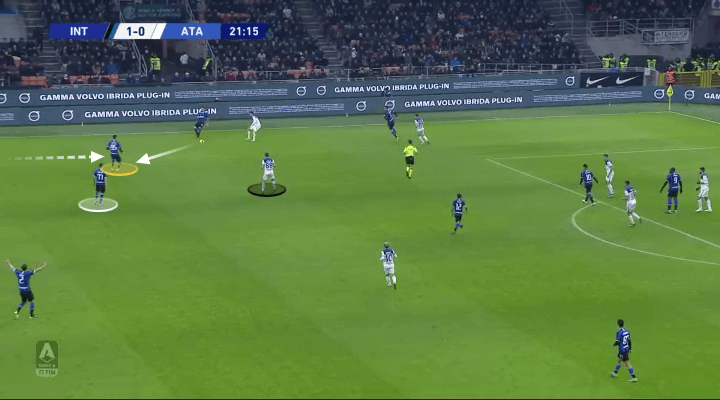 Godín is actually quite good in possession, but Bastoni’s numbers are consistently better or very similar. For example, the youngster averages 2.01 passes into the box to Godín’s 1.51 and 1.31 through passes to Godín’s 0.65. Bastoni also comes out on top in terms of carrying the ball with his 2.41 progressive runs (which dwarfs all of Inter’s centre-backs) to Godín’s 1.83.

Interestingly, Bastoni is also superior in categories where you would expect Godín to dominate, such as aerial duels, where Bastoni wins 62% of his 4.02 aerial duels to Godín winning 61.1% of his 3.88 aerials. Additionally, Bastoni wins more of his defensive duels, 62.1% to Godín’s 60.8% and makes more interceptions 4.63 compared to Godín’s 4.09. The Uruguayan makes more clearances though and remains a more experienced player but Bastoni stacks up very well indeed.

As this analysis has shown, Bastoni has made himself an important cog in Conte’s Inter machine. His impressive use of the ball and solid overall defensive contribution have seen him oust the prestige signing of Godín from the starting eleven. For Inter, that has given the team an improved balance in their build-up play which sees them deal better with being pressed aggressively. Still, Bastoni is inexperienced and Godín will definitely play his part in the second half of the season as Inter battle for the Scudetto, but Bastoni has shown that he definitely is one for the future as well as for the now.