On Saturday, Borussia Dortmund resumed their Bundesliga title chase by beating Augsburg 5-3, away from home. Dortmund showed excellent resilience to come from 2-0 down to rescue the win, with Erling Haaland scoring a hattrick in 23 minutes after coming on as a second-half substitute. This tactical analysis looks at the tactics both sides used in this closely fought Bundesliga game. 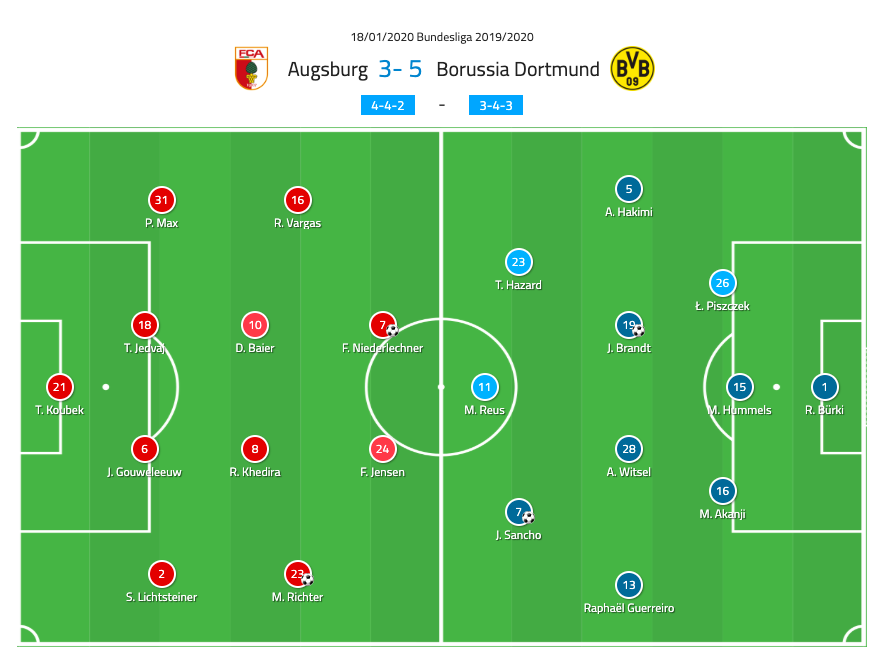 Dortmund fielded a 3-4-3 with Roman Bürki in goal with a back three comprising of Łukasz Piszczek and Manuel Akanji either side of Mats Hummels. Axel Witsel partnered Julian Brandt in central-midfield with Raphaël Guerreiro and Achraf Hakimi in the wing-back positions either side of them. Finally, Jadon Sancho and Thorgan Hazard played as a front three with Marco Reus, who played as a false nine. Lucien Favre was clearly unhappy with the first-half performance and changed their formation to a 4-2-3-1 for the second half. 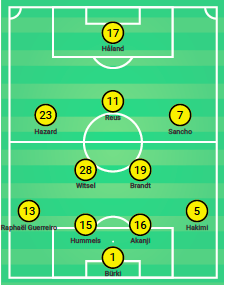 When Haaland came on for Piszczek in the 56th minute, Reus dropped back into an attacking midfield position with Hazard and Sancho either side of him.

For Augsburg, Tomáš Koubek played in goal with the home side lining up in a 4-4-2 in front of him. Stephan Lichsteiner and Phillip Max played in the full-back positions with Tin Jedvaj and Jeffrey Gouweleeuw at centre-back together. Daniel Baier partnered Rani Khedira in central-midfield with Marco Richter and Ruben Vargas on the wings. Upfront Fredrik Jensen partnered Florian Niederlechner who has been in red hot form this season. At times Jensen dropped more into a natural 10 role, changing Augsburg’s formation into a 4-2-3-1.

Augsburg had a clear game plan, to lure Borussia Dortmund’s press forward and hit the space directly behind their defence with quick balls over the top, usually in the halfspaces.

How both sides’ sloppy defending was punished

As much as this high-scoring game was the result of some excellent finishing and creative play in the final third, it was also the by-product of some poor defending displayed by both teams.

It’s only natural that after the Christmas break there is bound to be some rust, however, there were some basic errors on show from the respective defences, and these were swiftly punished.

Firstly Dortmund were uncharacteristically unorganized, and Augsburg were able to find space between their back three on several occasions, scoring twice from such opportunities.

Piszczek struggled to deal with them focusing the majority of their attacks down his flank, as they looked to exploit the oldest player in the Dortmund side, where they were able to find space to play the ball across Piszczek and attack the gaps between Piszczek’s centre-back teammates Akanji and Hummels. 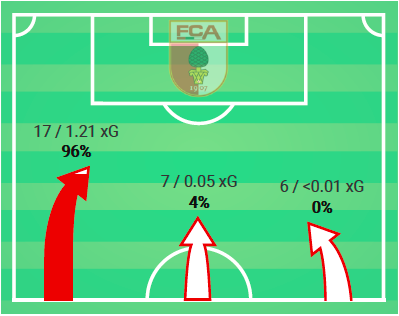 The analysis below shows how Niederlechner was able to seamlessly slip in between Hummels and Akanji to latch onto the ball across the six-yard box to open the scoring for the home side. As much as this is down to poor body positioning from both of the centre-backs in this case, it also comes down to Raphaël Guerreiro not getting back quick enough as Augsburg countered, and with Akanji aware of Richter moving towards the back post on his blindside, was perhaps less aware of Niederlechner’s run through the middle, and the distance between himself and Hummels being exploited. 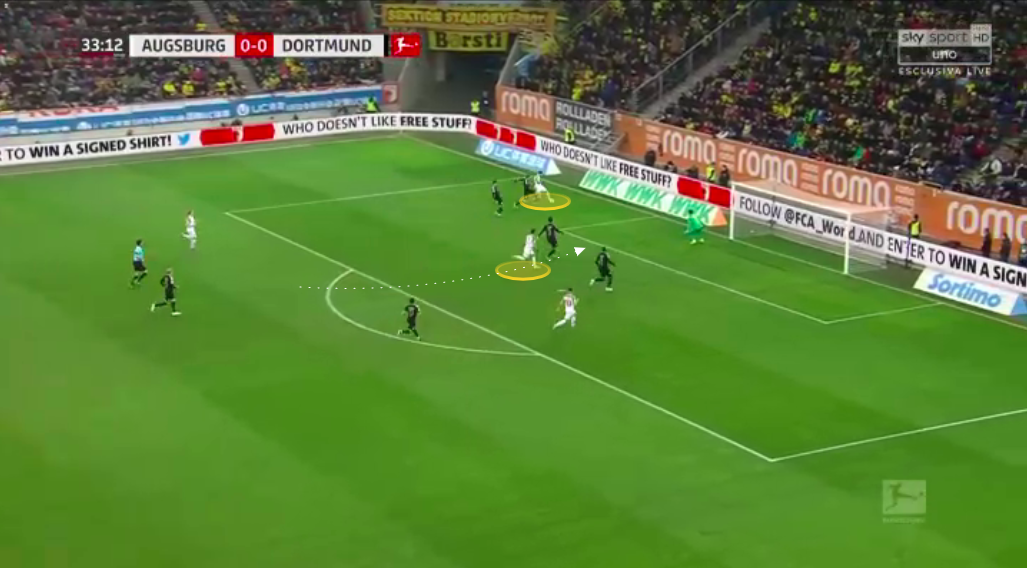 It was a similar theme for Augsburg’s third goal too. Once again Raphaël Guerreiro should arguably have deeper and tighter to his back three and Akanji and Hummels allowing Niederlechner to remain unmarked between the two of them and he had the simplest of tap-ins. There’s no doubt Lucien Favre would have been furious at this goal and he immediately brought Piszczek off in order to bring Haaland on. 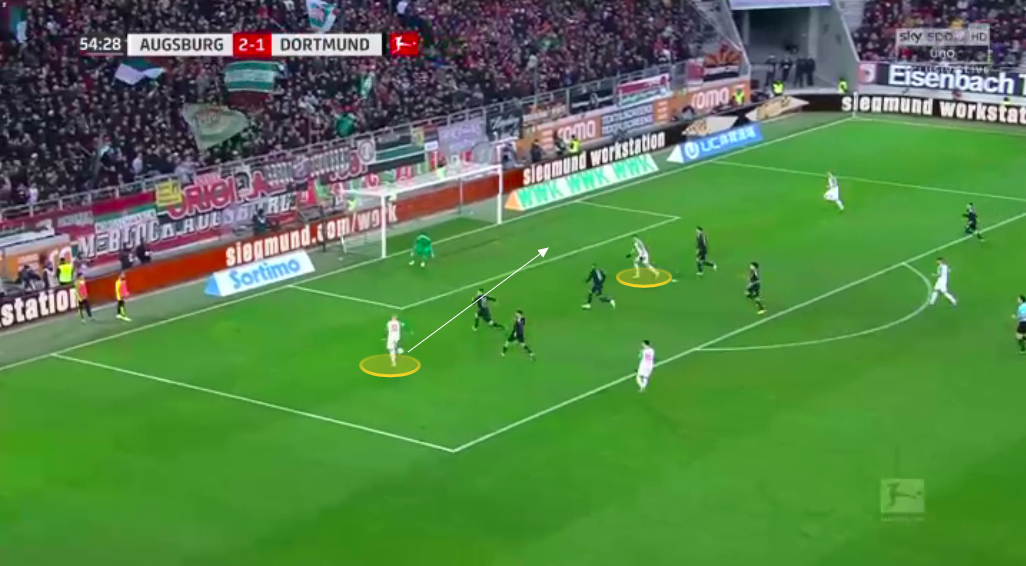 However, it wasn’t just Dortmund that showed serious lapses in concentration defensively. Augsburg were at fault for allowing Dortmund back into the game in the 49th minute. As Hazard approached the 18-yard box from the right-side, Khedira found himself dragged towards the ball-carrier despite the fact Augsburg already had two defenders on him. By doing this he left Brandt with space to receive inside the 18-yard box. Although he tried to recover and pressure Dortmund’s number 19, it was too late and Brandt struck the ball past Koubek, beginning the fight back. 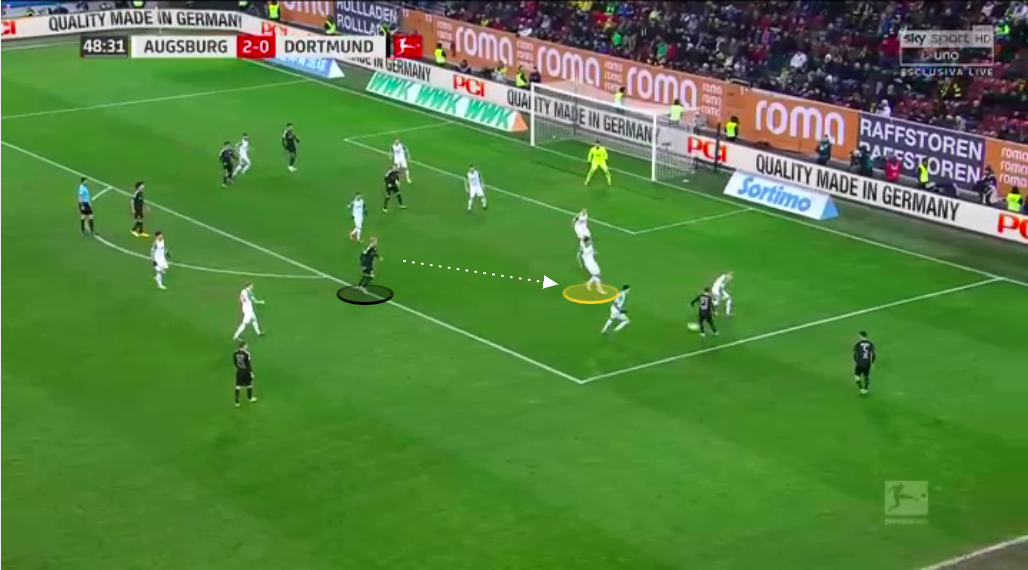 How the home side tried to nullify Witsel

Augsburg had clearly identified Witsel as the key to Dortmund’s buildup play and looked to prevent them from being able to play the ball easily into him from the get-go. When Dortmund’s back three had possession Witsel would come across to receive, turn out, and orchestrate Dortmund’s forward play. Whilst making this run Brand would support on his blindside to provide balance. 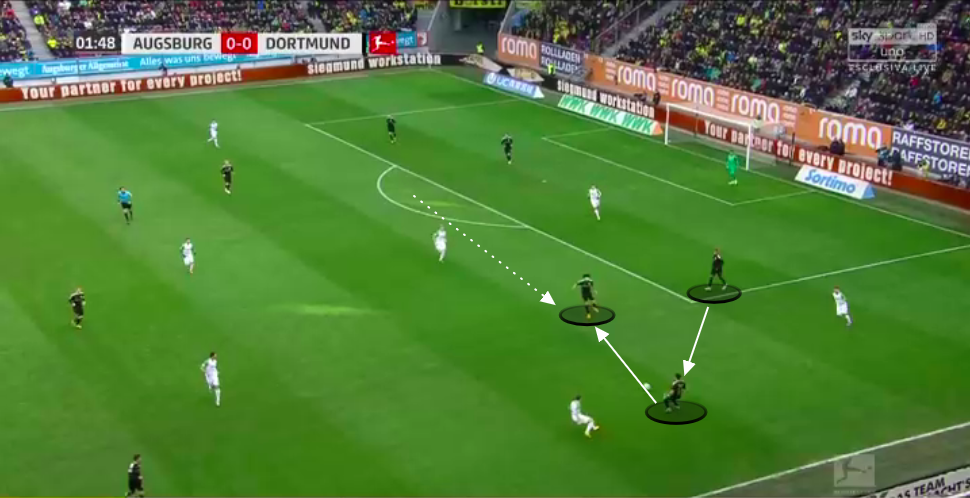 In doing so Witsel was able to help Dortmund beat the first line of Augsburg’s press. However, Augsburg looked to prevent this at any time and ensure Dortmund were forced to play long. Ironically it was playing forwards directly that later contributed heavily to Dortmund putting Augsburg to the sword.

In the image below it shows how Jensen’s job in the press was to block the passing lane to Witsel, regardless of whether the ball was with one of the three centre-backs, or whether it was worked into a wider area. This also allowed Neiderlechner to stay in central positions, should the ball be won back, he would then be able to quickly make a run into a dangerous central area as Augsburg countered – which is exactly what happened for their opener. 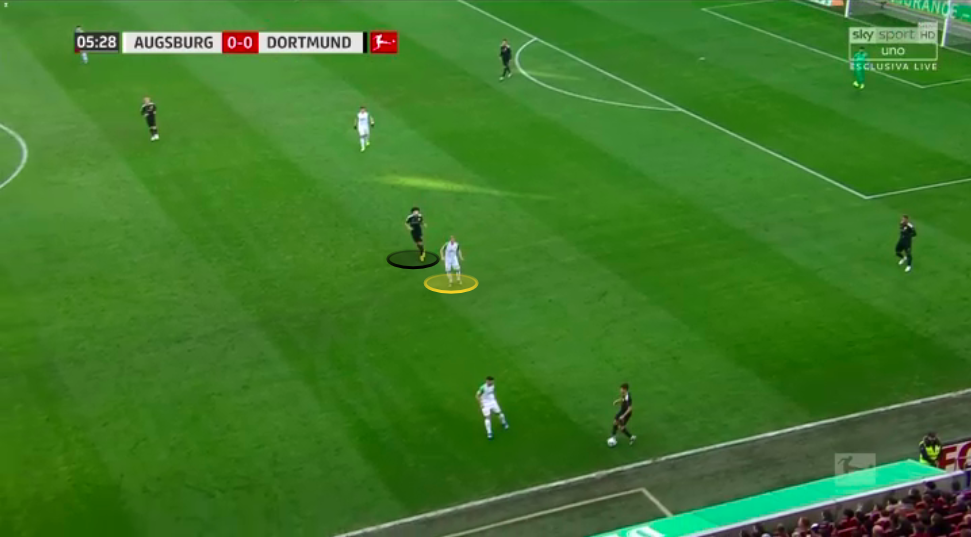 Finally, should Dortmund beat the press and thread the ball through to Witsel they were quick to react and swarm the midfielder. 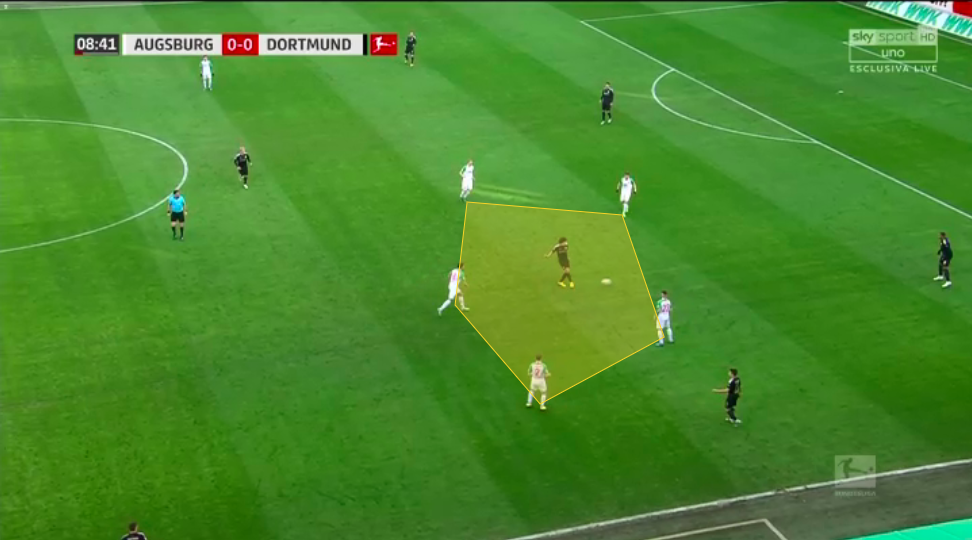 The home side were very committed to bringing Dortmund out of a deep block and creating space behind their back four to play directly into. But Dortmund were aware of this and were resistant in being brought too far forward.

As the image below shows, they had a PPDA of 49 for the first 30 minutes, and it was only once they went behind and had to chase the game, did they begin to press higher. 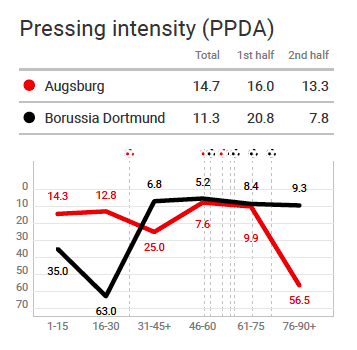 To encourage them to press forward, Augsburg would frequently work the ball backwards should Dortmund be sat in at any point. 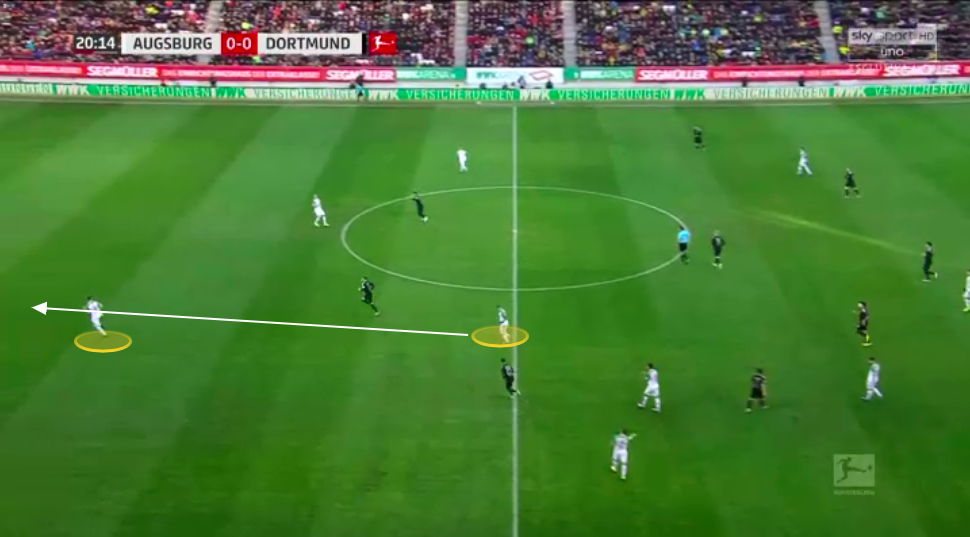 Were they to play forward from the back, the midfield would frequently just bounce the ball back to them, as they sought to encourage Dortmund to engage them in higher areas. 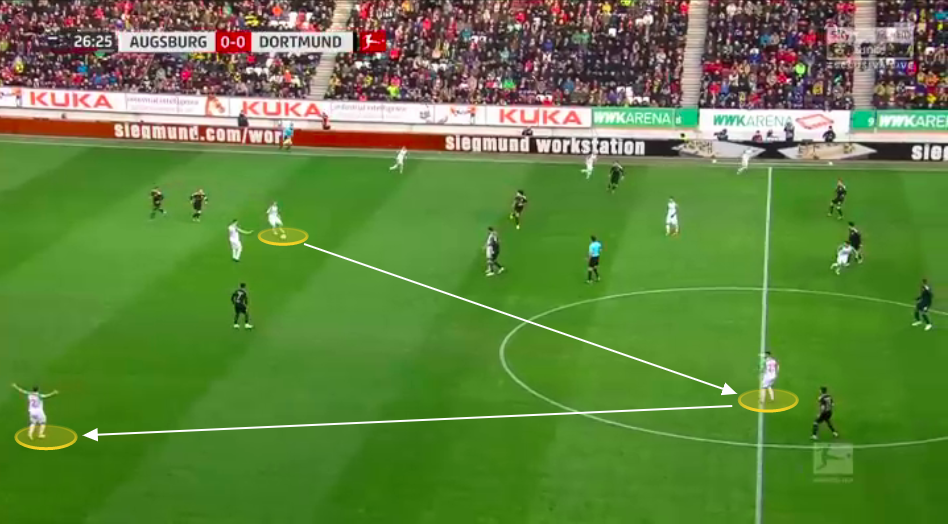 When they were successful with this, Augsburg were quick to play a long ball forward, looking to pass over the top of the Dortmund backline. 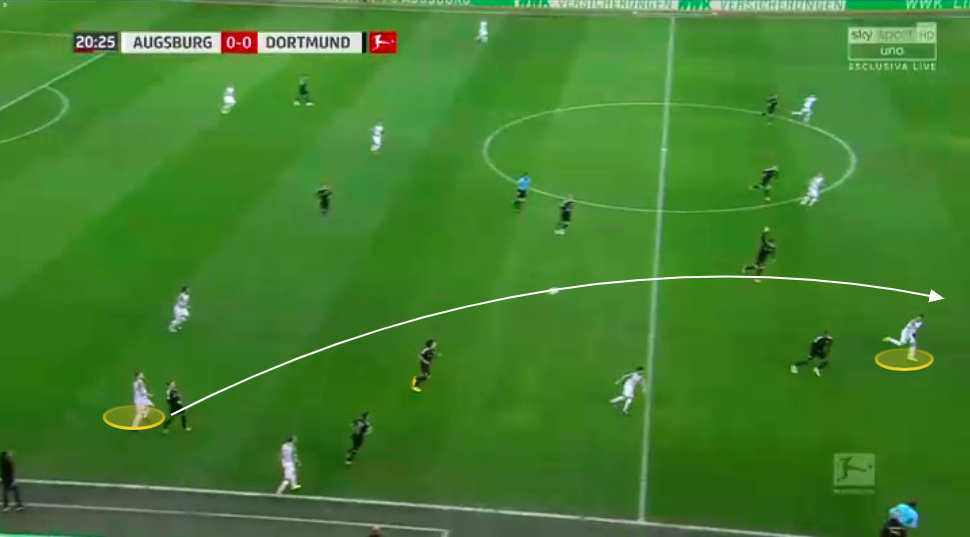 Dortmund had to change their approach to getting behind Augsburg’s defence, whose sturdiness frustrated the away side in the first half. There was a lack of quality in wide areas, with Dortmund failing to complete a single accurate cross from their eight attempts, as well as managing just one shot on target from six efforts in the first half.

It was the introduction of new signing Haaland that rejuvenated Dortmund’s attack in the final third, as he was able to attack the considerable space Augsburg left behind their defence.

In the image below we can see Augsburg’s defence are high, operating close to the ball-carrier, who in this case was Sancho. They were clearly wary of the threat posed by the likes of Sancho and Hazard should they have space to run at the defence in central areas. When Reus was playing as the forward and generally operating as a false nine, he was naturally dropping deeper, whereas with the introduction of Haaland, they suddenly had a forward leading the line who thrives when given space to attack behind the backline, rather than in front, and it was the Augsburg’s failure to adapt to the substitution that cost them dearly. 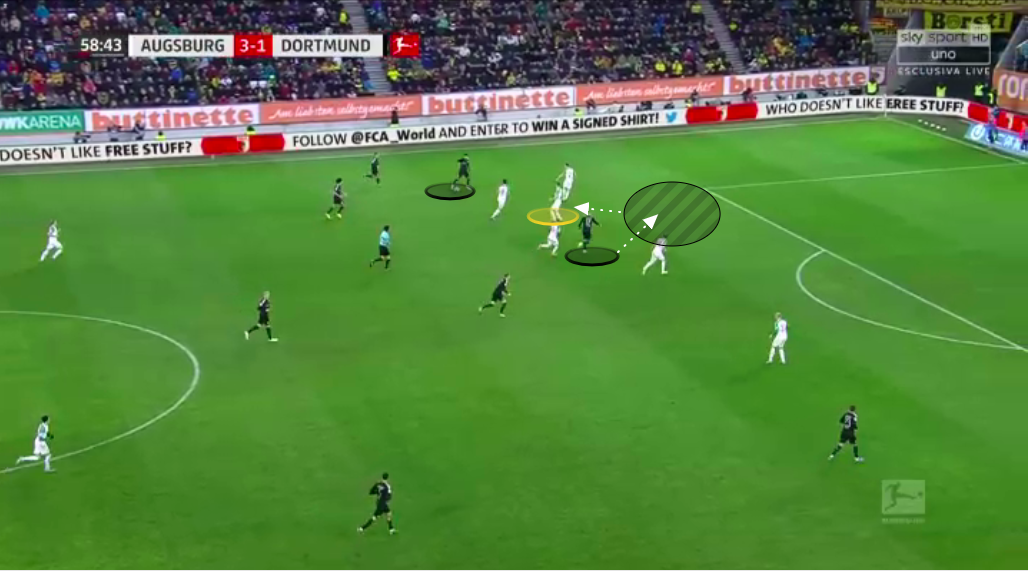 As mentioned earlier, Augsburg looked to encourage Dortmund to play long, and when Haaland was introduced, Dortmund looked to do this themselves with little encouragement needed.

The image below again shows how high Augsburg’s backline was positioned with Dortmund’s front three of Haaland, Sancho and Hazard close to one another, ready to break into the space behind the defence. 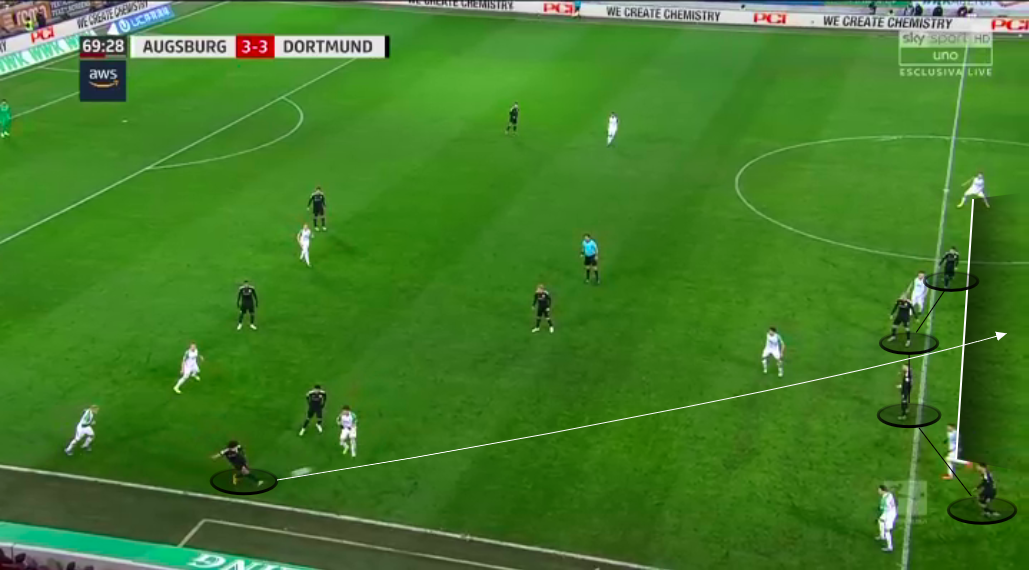 As the game wore on, and with Dortmund taking the lead and Augsburg now having to chase the game, spaces began to open even more, but still the consistent element throughout this was Dortmund’s ability to attack the space behind Augsburg’s high line. 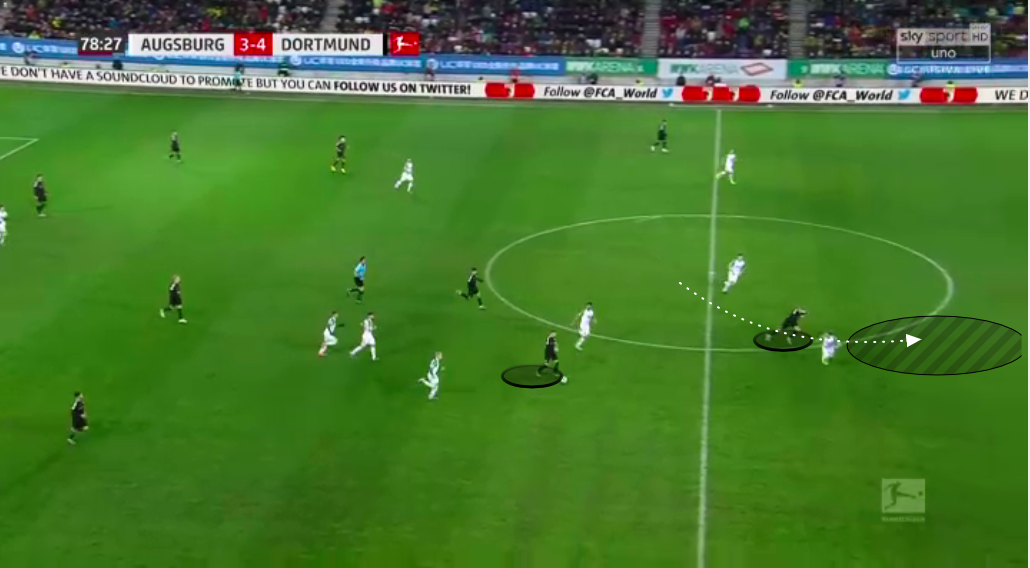 It was a slow start from Dortmund and Augsburg took advantage of this, deservedly taking the lead in the first half. They were unable to keep the away side out, however, and it was as much the brilliance of Haaland as it was Favre seeing that he needed to change his tactics, as well as the way his side was set up, for them to get the better of the home side.

With Borussia Mönchengladbach slipping up to Schalke, it was vital Dortmund got a result here to close the gap on Mönchengladbach as well as ensure Schalke stayed behind them on goal difference in the league standings. However, with RB Leipzig and Bayern Munich winning comfortably, Dortmund are still very much one of the chasing pack, rather than being a favourite for the title. However, it was nevertheless an impressive win for the away side on their first game back from the Christmas break.