The Bundesliga returned from its winter break on Friday night at Borussia Park with Borussia Monchengladbach taking on Schalke. The reverse fixture occurred back on the opening day of the season and ended in a 0-0 draw, with both sides having new coaches both looking to establish their tactics on their respective teams. This time around, it was an excellent Schalke side who took home all three points from a Gladbach side who again looked complacent after a lengthy break. In this tactical analysis, we will look at what went wrong for Gladbach tactically, and look at how Schalke took advantage to win the game.

Schalke were without the outgoing Alexander Nübel in goal and employed their usual 4-3-1-2 formation, which during a high press turned into more of a 4-1-3-2, with Omar Mascarell a strict number six. Gladbach for the first half played a 4-2-3-1, but due to build-up issues and a lack of ball progression, changed to a 3-4-3 with Denis Zakaria dropping into the defence. 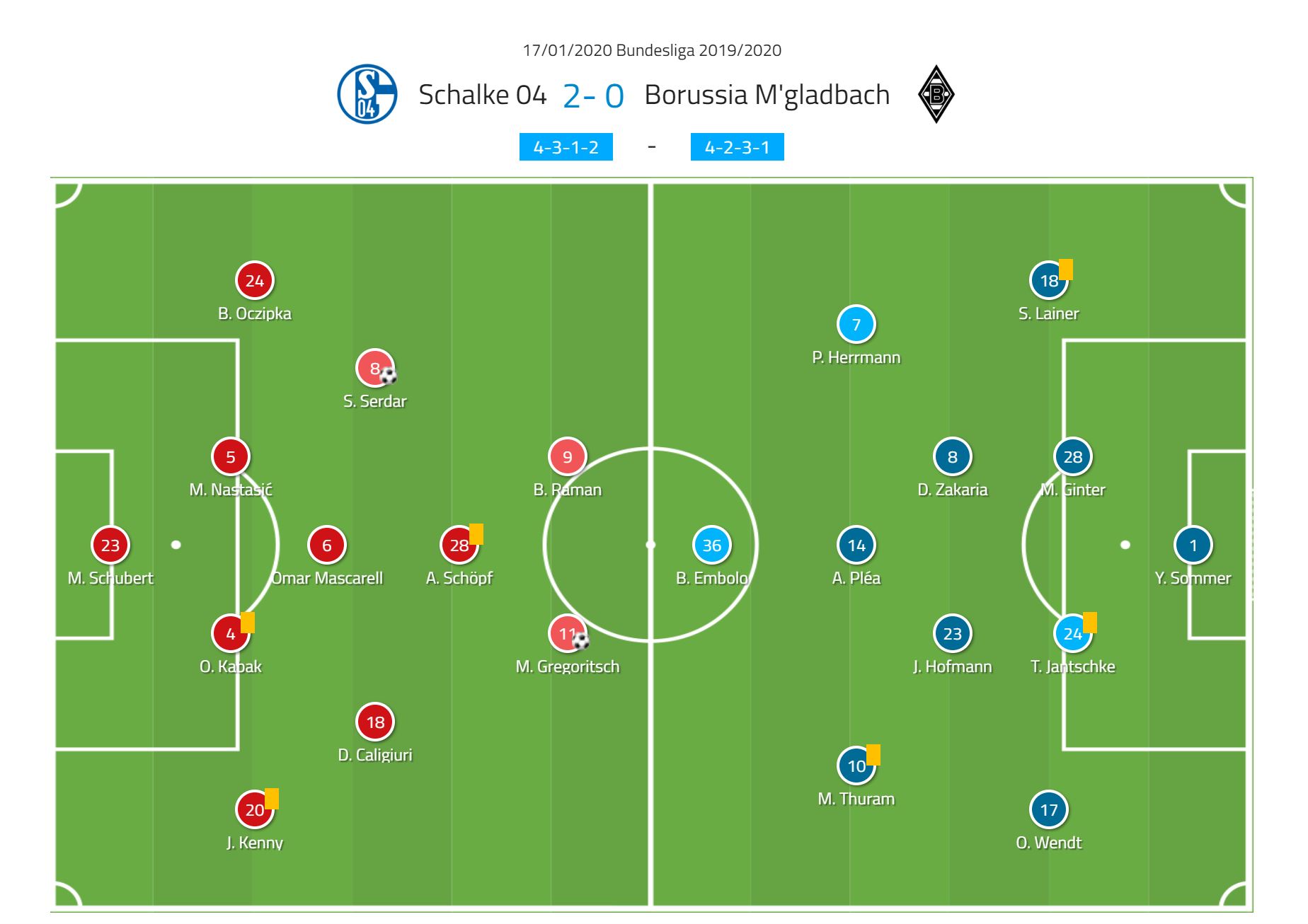 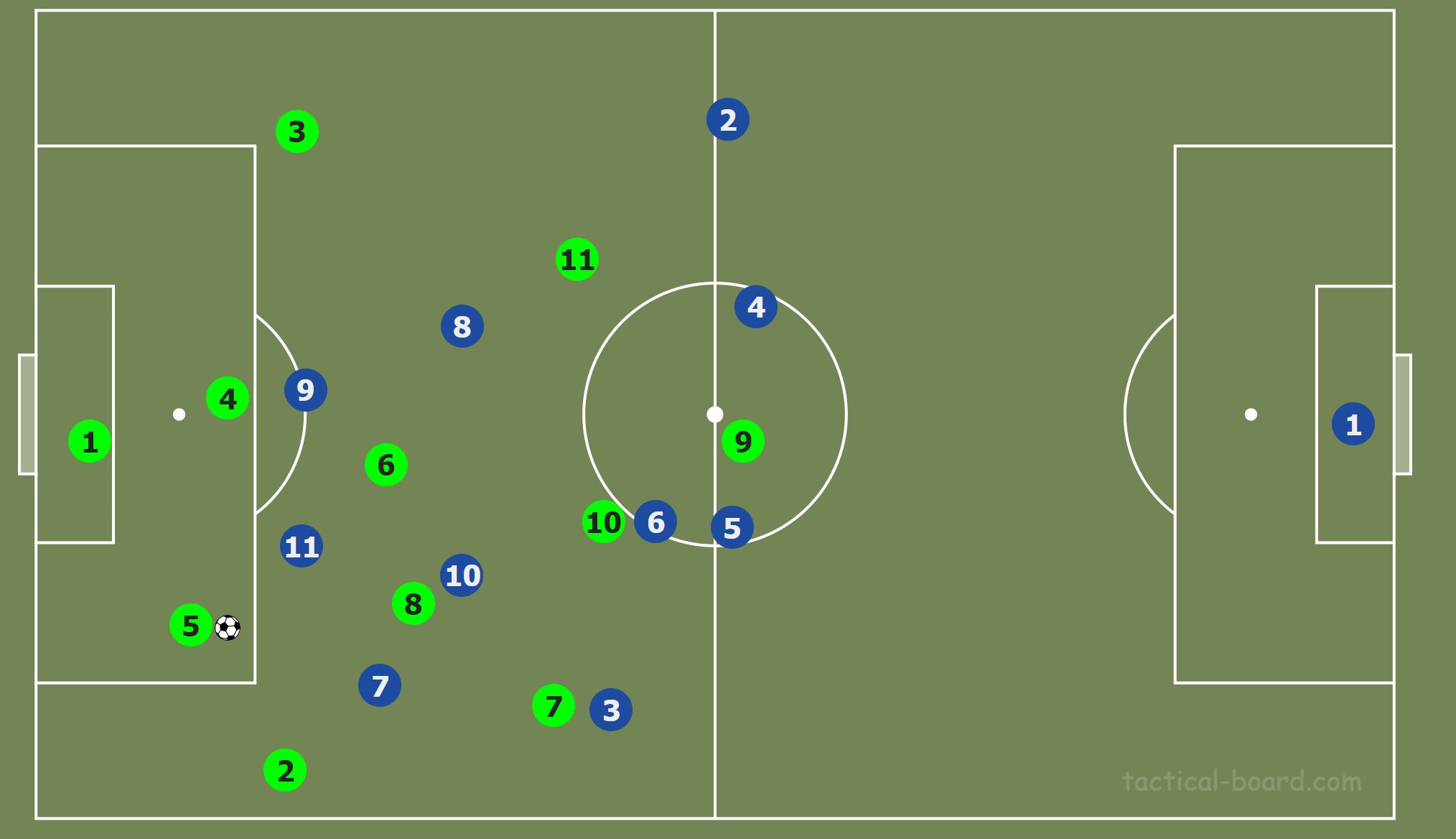 Gladbach particularly struggled down the left, with Tony Jantschke’s left-footed passing not great in the game. We can see here the pressure from Schalke is intense, but not completely unplayable, with the inside lane open for Wendt to play the ball inside. The ball near central midfielder (Zakaria), is able to be pressed from the front and from behind if the ball is played inside, but the presence of the other central midfielder should allow Gladbach to play out.

We can see again here, the ball is forced to the full-back and the passing lane into the central midfielder is open, with no pressing trap organised to press him. Oscar Wendt goes down the line instead of choosing this pass inside, which forces Gladbach to rely on receiving with pressure from behind, something which they are usually excellent at.

Gladbach often use these combinations mentioned of receiving with their back to goal and gradually playing upwards with short passes and up, back and through combinations. Schalke’s centre backs and number six were aggressive again from behind and for most of the game limited Gladbach’s ability to build up in this way.

We can see in this example below Schalke are able to match Thuram’s run inside to support Pléa and the pressure from behind ensures Pléa miscontrols the ball.

We can see again below there is not much support from behind for Thuram and pressure from behind leads to the ball being lost again. Omar Mascarell tightly marks Embolo also which cuts off the horizontal option.

On the occasions Gladbach could build-up vertically, they were often unable to find the most ball far player, and as a result had to use multiple up, back and through combinations in order to get high up the pitch, which allowed time for Schalke to recover back into shape.

Change to a three improves build-up and verticality

Gladbach moved to a back three in the second half, which allowed them to stretch the first line of Schalke’s press and progress the ball. With the back three now in place, Gladbach had a 3v2 against the two opposition strikers, and as a result, the centre backs could play the ball laterally, and look to push forward when in space. We can see in the example below that after a switch of play along the back line the centre back has more time on the ball to find a pass. This puts more stress on the wide central midfielder, as the forward passing lane from the centre back is less covered by the striker.

As a result, this posed a problem for the wide central midfielder, who on Schalke’s left was Suat Serdar. Serdar had to try to minimise the size of two passing lanes, the inside lane to the number ten, and the outside lane to the full-back. 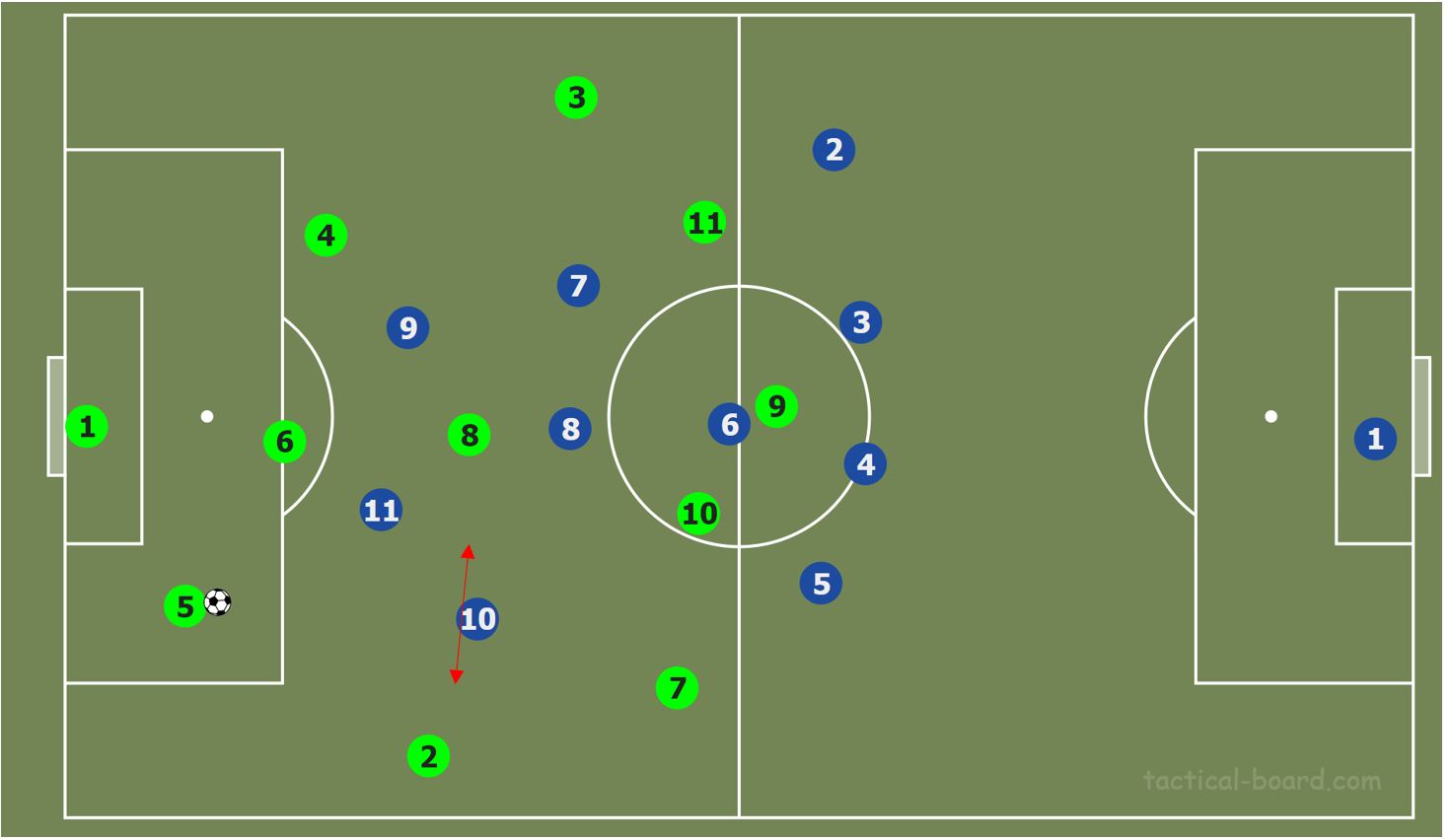 Here, Serdar protects the passing lane inside to Thuram, choosing to protect the central area which is closer to the goal and offers better passing angles for the player who receives the ball. As a result, the full-backs were allowed more space, and Gladbach’s right full-back Stefan Lainer, happens to be a major threat if given space.

Furthermore, with the space conceded in wide areas, Thuram could move across once the ball was out wide in order to overload the full-back and create a 2v1.

This extra space conceded also allowed for Gladbach to improve their verticality as a result of the stretching of Schalke’s narrow midfield, and as a result of Schalke becoming deeper as time went on. We can see an example of some better combinations here, where Neuhaus is unable to receive the ball from the first pass, but is able to from the second. From there he can turn and play in Lainer, who can utilise the 2v1 overload on the full-back and deliver an accurate cross.

Again here, following a quick horizontal switch across the back line from Gladbach, the ball is played out to the full-back and again, due to the stretching of the Schalke midfield they are able to get inside into central areas. However, Mascarell is on hand and aggressively presses the ball carrier, and wins the ball.

Schalke scored twice via counter-attacks against a Gladbach side who’s defensive transitions were not executed as well as they usually are. One of the main reasons for this was the lack of vertical compactness, which allowed Schalke to build their attacks.

We can see here, Gladbach’s counter-pressing structure is pretty good, with support behind the ball and from the sides should the ball be lost. Rotations within Gladbach’s offensive system have occured here, with Pléa deep and Zakaria in the ten rotating. Again, Gladbach don’t do a great job of receiving with pressure from behind, and Herrmann loses the ball.

Once the ball is lost, Pléa makes no counter-pressing movement having moved slightly wide, which leaves Jonas Hoffman as the only real counter-pressing player. Furthermore, there is no additional counter-press from the defence, and so Gregoritsch is able to just receive the ball, turn, and play through Gladbach. This leads to a shot with a value of 0.39 xG which Schalke don’t convert. A  coordinated forward movement after the ball had been played to Gregoritsch would have allowed Gladbach to at least potentially foul Schalke and stop the counter-attack.

Again here, the ball is able to get through to Schalke’s narrow three and there is no pressure from behind to prevent Schalke from playing forward. Contrast this to the way Schalke applied pressure from the front, and the impact this then had on Gladbach’s ability to build-up. We saw this issue within Gladbach’s tactics in the game against Dortmund also.

It was an uncharacteristic game for Borussia Monchengladbach, a very characteristic game for Schalke and in the end the result was deserved. As discussed within the analysis, Schalke pressed aggressively and forced Gladbach to rely on their technical ability and decision making in the final third, which was lacking on the day. David Wagner’s side and his tactics, who are now just two points off Gladbach, probably aren’t getting the credit they deserve.