This weekend’s Bundesliga fixtures saw Schalke take on Borussia Dortmund in the Revierderby. With the Bundesliga so tight this season, both sides were looking for a win to climb up the table, but in the end, it was another poor display from Borussia Dortmund, and another good display from Schalke– a display which probably should have seen them claim all three points. Dortmund simply couldn’t deal with Schalke, and as I will get into. In this tactical analysis, I’ll look at Schalke’s press and how Dortmund dealt with it, and Dortmund’s other struggles in their tactics throughout the game.

Schalke’s most used formation was their 4-1-3-2 pressing structure, as this was the defining factor in the game as I will cover shortly in this analysis. Dortmund meanwhile played a 4-2-3-1 which mostly resembled a 4-4-2 for large parts of the game, particularly in the first half where Schalke were dominant. 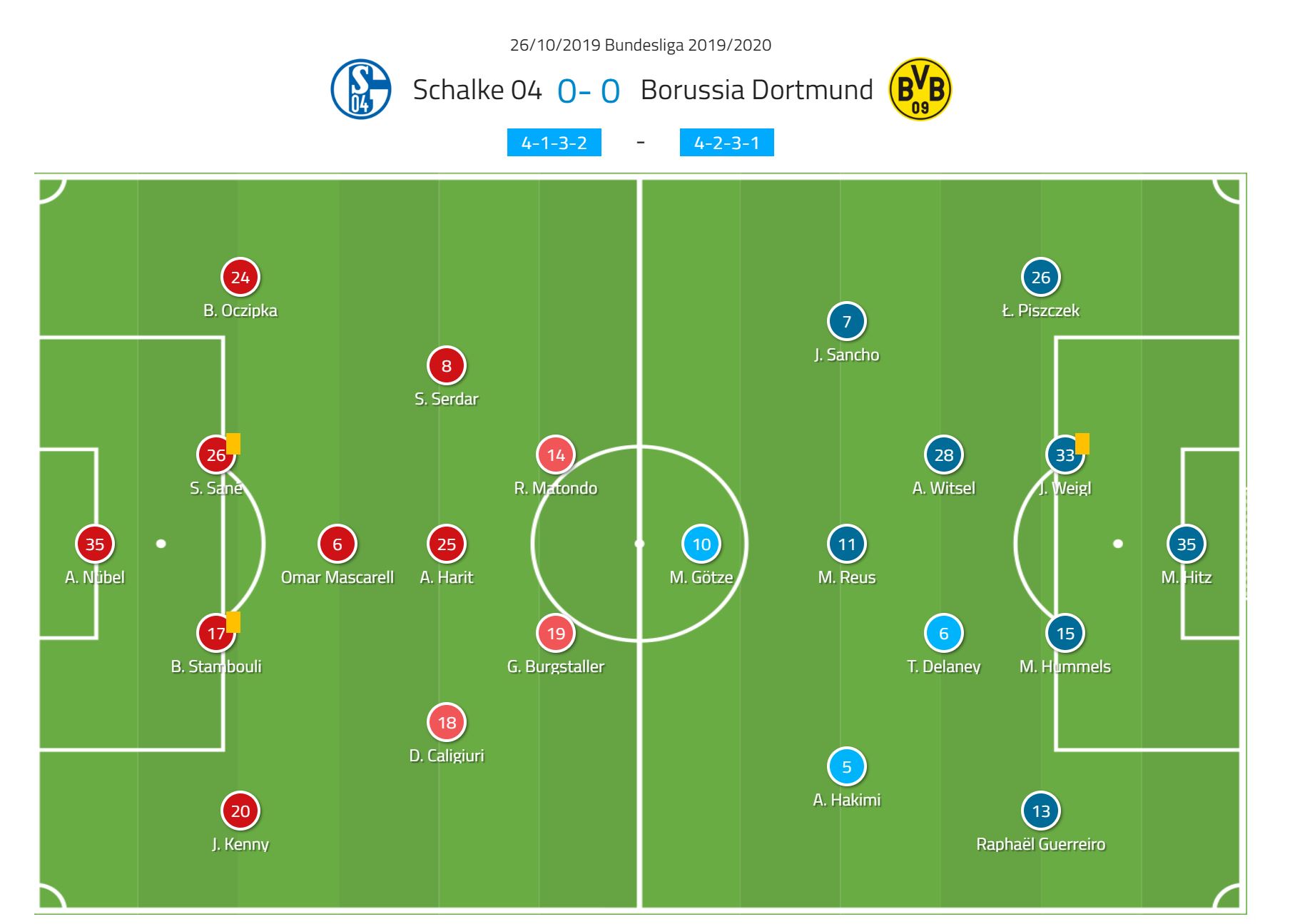 Schalke’s press is something I seem to have to cover every time I write about them, and yet again it was extremely effective. Schalke recorded a massive 25 high recoveries in the game, compared to Dortmund’s five high recoveries.

We can see Schalke’s 4-1-3-2 press here. The two strikers cover the central defenders, while the widest players in the midfield three cover the full-backs. Omar Mascarell acts as the holding midfielder and looks to seal the press, offering cover should any player be beaten while pressing.

We can see in this situation below the same pressing format again. Here Dortmund actually have a man over as highlighted, but Schalke cut the passing lanes in their pressing, with the player pressing the ball carrier coming from the direction of the free man. Dortmund struggled to outplay this press without committing too many men behind the ball, and so when Schalke didn’t get high recoveries they usually recovered the ball from one of Hitz’s long kicks up the pitch.

When teams enter wide areas of the pitch, Schalke are extremely effective at closing off the central areas, as we can see below where Schalke both press the ball carrier and cut off available passing options. This results in the ball carrier dribbling and being dispossessed, or attempting to pass and often giving the ball away.

For all the recoveries high up the pitch, Schalke were unable to capitalise in transition having just regained possession. Their decision making and pass selection, as well as some poor finishing,  let them down and was ultimately why their 1.58 xG in the game was converted into zero goals.

We can see an example of this below, where Schalke win the ball back high and quickly outnumber Dortmund, but Amine Harit chooses the wrong option and actually dribbles with the ball in this situation, rather than playing a through ball into Bastian Oczipka.

We can see here Rabbi Matondo has the option to slide the ball back to Harit, but again Schalke choose the wrong ball and a pass is played onto Burgstaller who has to control the ball while running at speed and surrounded by players.

In one final example, we can see some poor decision making from Schalke, who stay too narrow and fail to make use of the vast space available in transition. In situations like these, the decision making is vital in order to keep the ball moving forward and keep momentum in the attack, so as to ensure recovery runs can’t have an effect. Having the least amount of touches possible when outnumbering the opposition can make this easier, as players run faster without the ball than with it. Here Burgstaller dribbles and slows the attack down.

Dortmund find an effective way to beat the press

Dortmund did find a way to overcome Schalke’s press twice in the game, and this may give other teams ideas on how to play against Schalke this season. Both situations came from identical passes as I have illustrated below, and while Schalke did fix this somewhat, it is still something teams will look to test against Schalke I believe.

The situation comes from the wide central midfielder and defensive midfielder not covering the passing lane to the striker effectively as we can see below in this shape. With Schalke expecting a pass down the line, they don’t cover this passing lane and so when Dortmund could move the ball quick enough, they could receive the ball in this area. 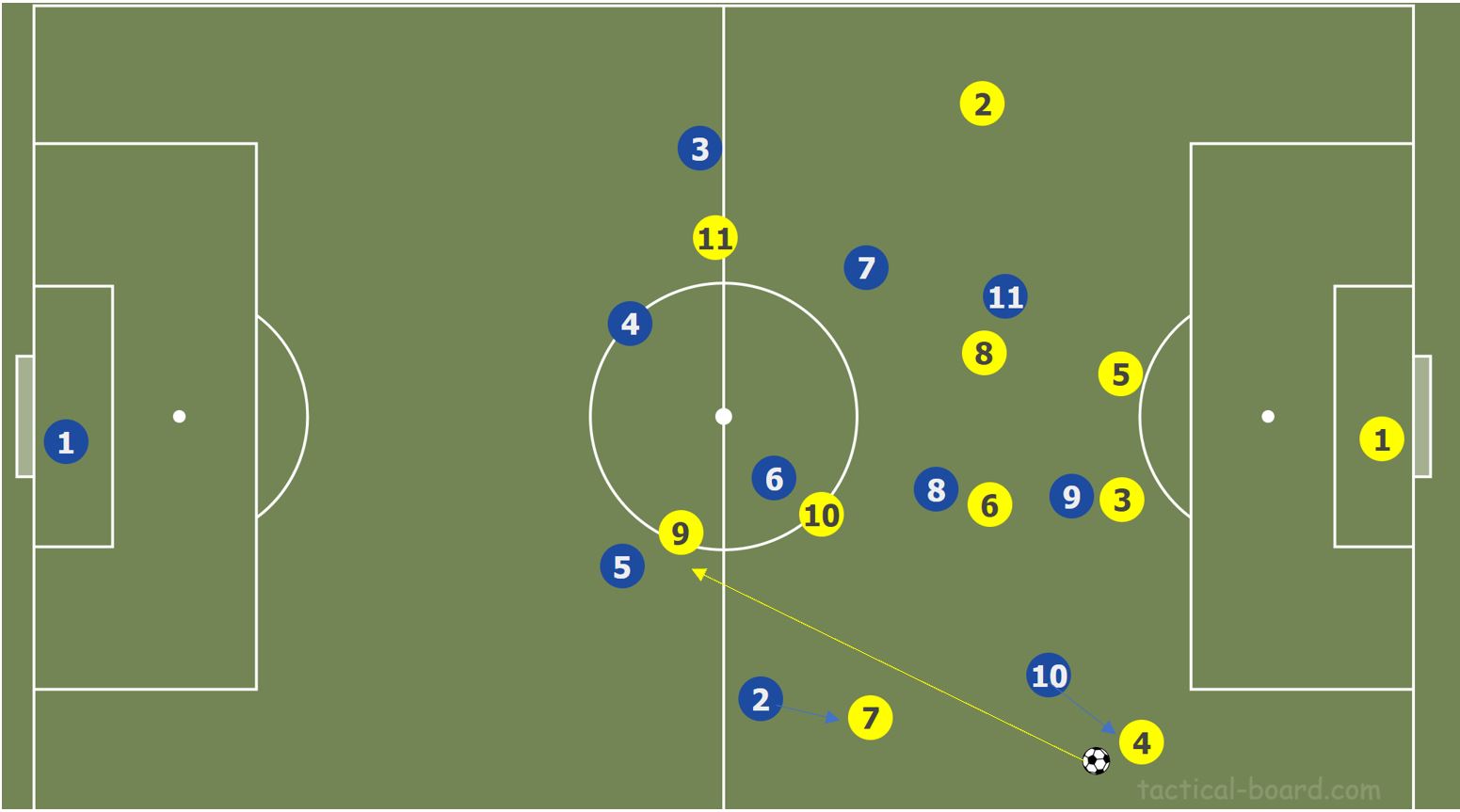 We can see this situation here where Daniel Caligiuri is slow to cover the passing lane, and a good pass from Hakimi finds the striker. To cut this passing lane Caligiuri has to make a long intense run at times, and so if teams can give the impression they are playing down the line and then play the ball inside, they may be able to find success.

We can see in the same phase of play here, where, in what was a common theme for Dortmund, they were unable to combine effectively thanks to relying too much on runs from deep and a lack of runs in behind.

Dortmund only managed 0.29 xG in the game, which was largely down to both Schalke’s press and there poor combination play and reliance on deep runners. With Dortmund struggling to break the press, they began to commit more players back in order to create free men to break the system. This, therefore, had an effect on their play higher up the pitch, in that they had a lack of players to run in behind and combine high up the pitch.

Therefore, the only ways Dortmund could find to build their way up the pitch was through one two’s deep in their own half, which is slow and difficult to do with no focal point to the attack. Here Schalke’s press again forces a turnover, as Sancho has nowhere to play the ball forward or backwards, so tries a one-two with Axel Witsel unsuccessfully.

We can see again here, Dortmund can’t try and get in behind Schalke and so again rely on short one two’s to try and get through, but with so much ground to cover and a counter-press still to go through with no option of a long ball, it’s no wonder Dortmund were able to create such little chances in the game.

Schalke posed a real threat to Dortmund from set-pieces, hitting the crossbar early in the first half and registering another shot on target and having a penalty appeal from corners. Dortmund’s blockers struggled to handle the runners from Schalke, and so because they were attracted so far out, a space opened up for Schalke players to receive the ball in. Here Salif Sané outmuscles his marker and heads the ball while in this space, hitting the crossbar.

We can see another example here below of Dortmund’s blockers not doing an effective job of blocking the run of the attackers while following them in, not slowing them down, and not occupying dangerous areas. Here Guido Burgstaller (circled) makes a run from deep and is not blocked off at all really, and so he gets a free run into the same space between the lines again but is unable to score.

Schalke probably deserved a win but Dortmund showed again that their 4-4-2 can defend and keep a clean sheet, in parts thanks to the work of their goalkeeper similar to the last game week. It’s a testament to how far Schalke have come from last season that they will probably have been disappointed in a draw to their bitter rivals, but nevertheless it’s not a bad result for either team and both sit in similar positions, but with very different outlooks.