Eintracht Frankfurt are one of the most successful Bundesliga sides when it comes to scoring from crosses. Under head-coach Adi Hütter, Frankfurt are known for their powerful style of play, attacking down the wings and threatening the opposition goal with crosses.

In the following tactical analysis, we take a closer look at what makes Frankfurt’s crosses so dangerous. Our scout report depicts Frankfurt’s cross strategies and principles as well as the individual movement within the box.

A huge part of Frankfurt’s goals scored in 2019/20 comes from their wing play including crosses. Frankfurt (385) rank second just behind reigning champion Bayern Munich (406) in terms of the total number of crosses in the Bundesliga, as displayed below. This underlines how crosses are an important part of their attacking tactics.

Across all competitions, Frankfurt have scored 64 goals in 2019/20 so far. More than half of these goals, 36 of them to be more precise, resulted from crosses. And while 14 of these goals came from set-piece situations, 22 goals resulted from open play crosses which still makes up 34.38 % of all goals scored. Since this amount clearly makes their crosses an important part of their attacking strategy and a vital reason for their success, we will take a closer look at exactly these 22 goals in the following part of our analysis.

In the graphic below, the position from where the cross was sent in, the attackers’ positions and the position of the goalscorers of their 22 goals are highlighted. As one can see, there is a great variety in terms of the crossing positions. Despite favouring an end-line breakthrough before crossing, they also send in crosses from less advanced platforms.

The positioning of the attackers is reduced very much to the width of the 6-yard-box. The closer Frankfurt’s attackers get to the opposition goal, the more central become their positions. And these positions are also the areas where their goalscorer is positioned most often. In a position between the 6-yard-box and the edge of the penalty area, not much wider than the 6-yard-box, Frankfurt’s attackers are most threatening. Although this is not surprising as this is naturally the most dangerous zone, we can see Frankfurt taking advantage of this with several concepts which will be explained in the next chapter.

Also, it is not unusual for Frankfurt to score from crosses twice in a match. Augsburg, Hoffenheim, Bayern and Borussia Dortmund as well as Hertha Berlin and Köln became their victims, each conceding two goals from crosses against Hütter’s team. Whereas the first four conceded them from open play, Berlin and Köln conceded two goals from corner-kicks. This stresses how certain sides struggle with defending crosses. And especially against the top sides such as Bayern and Dortmund, their dangerous crosses allow Frankfurt to collect important points.

Although crosses pose to be a very useful attacking strategy, they can be used very differently which can have a huge impact on its effectiveness. Especially the attackers movement within the box plays a vital role for the chance creation from crosses.

Something which Hütter’s side take advantage of is when the opposition defenders are ball watching. Often, defenders would look for the ball-carrier. That, however, is accompanied with a lack of orientation and allows the attackers to steal away on the blind side. The so called “blind side runs” are a common strategy of Frankfurt’s attackers to get into less crowded positions and to receive the ball without the pressure of a direct opponent. As a consequence, they often move to the second post where the opposition defenders are unable to see them. And in some cases, they can even create a numerical superiority that way, as in the situation below.

Similar to the overload at the second post, Frankfurt generally like to overcrowd certain areas or overload certain defenders. This also explains the narrow positioning of the attackers, which we could also depict in the graphic of the first section of our analysis. With several attackers all moving into a certain area, they can create an overload against a defender and increase the probability that either of them can finish the attack. The defender, on the other hand, can only focus on one opponent at a time and is often overwhelmed. Against Bayern, Hütter’s team scored a goal that way, as one can see in the image below.

Another very important principle of Frankfurt’s cross play is to occupy the area where the ball might end up if all other players miss the ball. Often, it is the ball far wing-back who joins the box. This enables Frankfurt either to send in another cross or even to finish from this position since the opposition often miss to mark this player. In the next image one can see left wing-back Filip Kostić receiving the ball unmarked after all other players missed the cross.

Last but not least, in addition to overcrowding certain areas, Frankfurt also occasionally flood the opposition box with players. Therefore, their central midfielders also move into the penalty area. This does not necessarily mean that their chance of receiving the ball is higher because the opposition midfielders will most often track back and also move into the penalty area. But it makes it harder for the opposition to clear the ball as there is a higher density of players. As a consequence, it is more likely that the ball cannot be cleared out of the box in a controlled way. This offers Frankfurt the opportunity to get the rebound ball and therewith a second opportunity. Notice below how Union Berlin are confronted with five Frankfurt players in the box. In the end, Frankfurt win a loose ball within the box and utilise this opportunity to score.

Individual movements within the box

In Bas Dost, Gonçalo Paciência and André Silva, Hütter can decide between three attackers who can all threaten the opposition goal from crosses. While it seemed to be a tough challenge to replace Sébastien Haller and Luka Jović last summer, they found the ideal attacking personnel to replace the two. Although Dost and Silva’s playing profile is different, their abilities suit Frankfurt’s wing-oriented attacking style.

Dutch striker Dost is not as agile as Haller or Jović, but he is very suitable due to his finishing qualities. His heat map shows that he likes to stay centrally within the box in order to wait for crosses. And he does not need much space to bring himself into finishing positions. Despite not moving a lot, he still occupies the opposition defence, as the opponents are well aware of his abilities.

An important aspect is the timing of the acceleration in order to get in front of opposition defenders. This is especially useful in order to enable low crosses into the 6-yard-box. Dost, who likes to position himself just ahead of the 6-yard-box, is very skilled when it comes to the right timing of acceleration. In the following scenario, Dost scores a goal against Hoffenheim after a low ground-ball.

The Dutch attacker stays behind the defender which makes it difficult for his direct opponent to see him. Once Frankfurt’s wide player is ready to cross, he moves out of the cover-shadow and gets in front of the defender leaving his opponent nearly no time to react. Moreover, the robust striker can utilise his body to edge the defender away.

Contrary to Dost, Portuguese attacker Silva prefers to move dependent on the gaps that appear within the box. In the following scenario, for instance, Silva stays in front of the opposition back line as he recognises the vacated space. This enables him to receive and score since the defence focused on defending the space close to their goal.

All in all, it is not a big coincidence that Eintracht Frankfurt’s crosses are probably the most threatening ones in the Bundesliga. Not only their attackers possess the needed abilities, but they also utilise clever concepts within the penalty area. Hütter’s side follow simple yet effective principles and therewith regularly score from their crosses. Especially their overcrowding of certain areas as well as their blind-side runs make Frankfurt’s crosses difficult to defend. 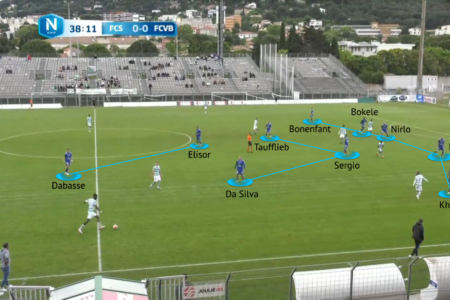 Villefranche Beaujolais 2021/22: The tactics that could earn them Ligue 2 promotion for the first time in four decades – tactical analysis

After finishing the Championnat National season in third place, Villefranche Beaujolais will face Quevilly in the French Ligue 2 promotion/relegation […]