Cadiz 2020/21: Their set piece threat that La Liga sides need to be wary of

Cadiz return to La Liga having last played in Spain’s top division, 15 years ago. Cadiz have been one of the Segunda División’s best performers for the previous four seasons, where they finished 5th,9th, 7th and finally 2nd. They were unfortunate to not win the title last season as two points from their last two matches would have guaranteed the title, they lost both in the end, while rivals Huesca, won both their final two matches.

Cadiz scored 50 goals last season and 24% of these goals were after set pieces. They averaged 43.5% ball possession last season, therefore, are likely to take advantage of more set piece situations this season as they hold limited possession. This set piece analysis will analyse Cadiz’s threat from set pieces as they look to utilise this strength to help them finish above the relegation zone in La Liga.

The first part of this set piece analysis will analyse Cadiz from attacking corners. This section of analysis looks at the movement of the Cadiz attackers, pre-corner and moments before the corner reaches a player.

In most attacking corner scenarios, five Cadiz players are in the 18-yard box to attack the corner. Below shows how Cadiz usually position pre-corner.

Striker Antony Lozano and left-back Alfonso Espino occupy the goalkeeper zone position, Lozano positioned himself close to the goalkeeper, this could have distracted the goalkeeper and has been a good distraction in corner situations.

When the ball is kicked, Espino ran towards the back-post, in the direction of the arrow, in the visual. Lozano stayed in his mid to far post zone, ready to attack the ball if the ball is directed here.

The opposition, Sporting Gijon, used a man-to-man marking system, therefore, as Espino made that far post run and Lozano occupied that far post position, the goalkeeper zone/six-yard area is free and unblocked for the other three Cadiz players to run into and attack the ball.

The above image displays the three other attackers, centre-backs Juan Cala and Fali and central midfielder Augusto Fernández.

Fali attacked the ball just outside the six-yard box and scored a header. Lozano and Espino pull their markers away from the mid/front post zones which allowed Fali a clear pathway to run, therefore, he is able to attack the ball with such power, as he is able to transition in clean fashion from sprint to jump for the ball, with no one blocking his run.

In summary, the generic player movements are as follows:

Fali and Jon Garrido will usually be instructed to attack the front post as they are strong in the air, they were successful in 2.20 and 4.20 aerial duels per 90. Lozano gives Cadiz an aerial threat at the back post having won 4.60 aerial duels per 90. From video analysis of other corners, there is a pattern in the movement of the attackers, at least one attacker would position in the goalkeeper zone to draw opposition defenders away from this zone to attack.

Areas to aim for

Corners are taken by Álex Fernández, he provides Cadiz with in-swinging and out-swinging corners and this allows Cadiz to be unpredictable and a threat from all corners. His quality in delivery is also key as 68% of his crosses find a Cadiz player. Three Cadiz goals have come from an out-swinging Álex Fernández corner, it is evident that they are most threatening from these types of corners.

Cadiz look to attack two areas in particular, the area close to the goalkeeper and the front post. 30% of corners that reach Cadiz players are aimed towards the goalkeeper zone, the previous section showed that their corner tactics were created to attack areas close to this zone.

A Salvi Sánchez in-swinging corner against Extremadura UD is directed towards the goalkeeper zone, the ball is circled and Fali challenged the Extremadura UD goalkeeper, Fali won the duel, consequently, Jon Garrido scored from the loose second ball. 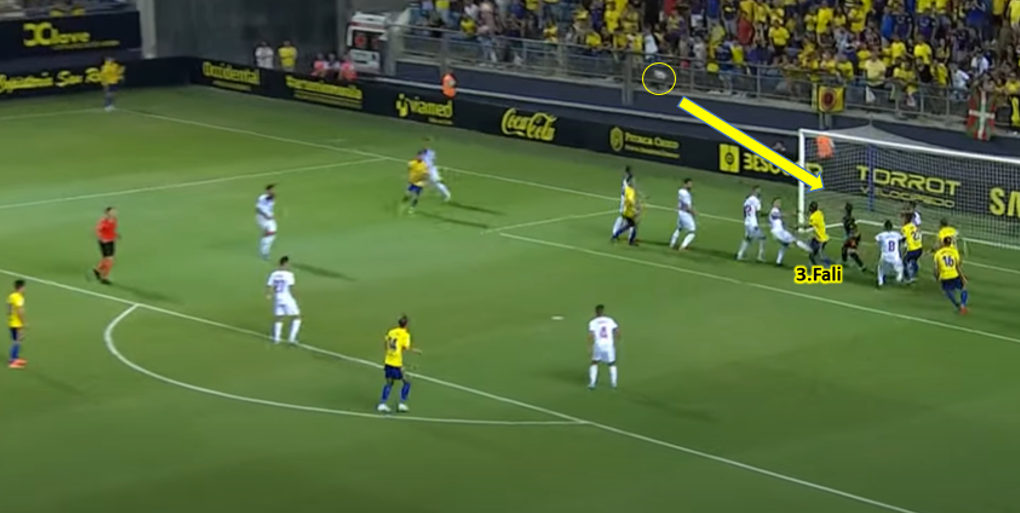 This goal is evidence of Cadiz’s unpredictability at being able to score from different corner scenarios as well as different type of corners(out-swinging or in-swinging). It also reiterates Fali’s threat from attacking corners.

In the previous section, a goal from the near post was analysed and 26% of corners that reach Cadiz players are in the front post area. The corners fall in the front post area outside the six-yard box, this is due many of the corners being out-swinging. The ball is also able to surpass the opposition player situated next to the front post as they are not close enough to the area the ball lands in. Below is an example of this, against Real Zaragoza. 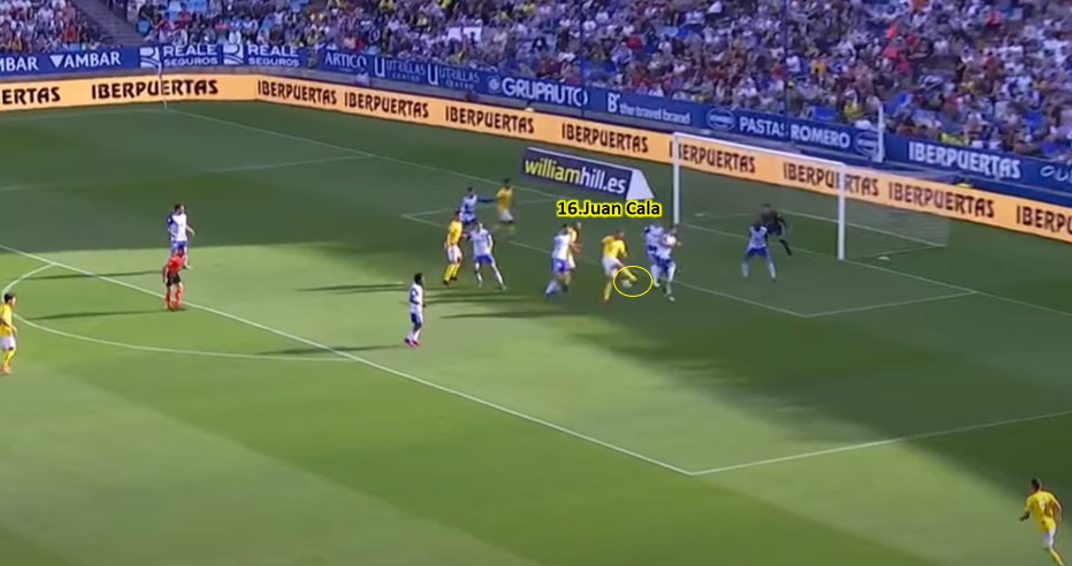 Álex Fernández’s outswinging cross is met by Juan Cala, one of the two attackers making the front post run, the ball curled away from the Real Zaragoza player marking the front post zone close to the goalkeeper. Juan Cala is allowed to play a first time pass along the box, for a Lozano tap in.

Following on from the previous sections, the players that run towards the back post aren’t just occupying/moving into this area to free up space in the mid zone/goalkeeper zone, it is also to cover all areas where Cadiz players may be able to attack the ball.

Once the corner is taken, the players at the back post can still affect the game, 21% of Cadiz far post corners were met by Cadiz players. If the corner is overhit they could look to attack the first ball and if the ball doesn’t reach their zone, they can also react to loose second balls, what I will analyse here.

In this instance, Lozano is the only Cadiz player near the goalkeeper zone, pre corner. He made a similar run to Espino (against Sporting Gijon) where he made a run from the mid to far zone, in the direction of the arrow. 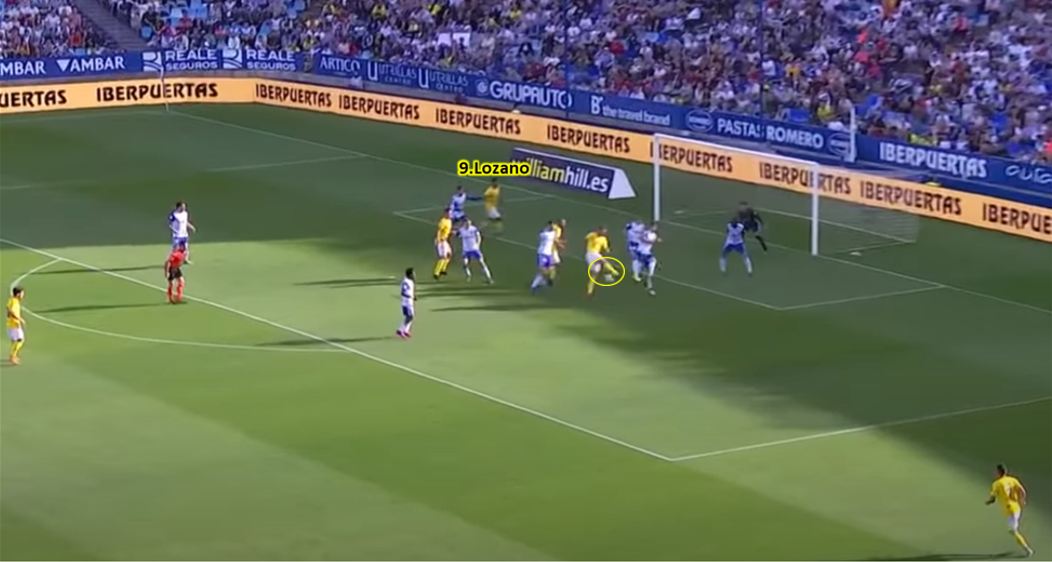 As Juan Cala flicked the ball across the six-yard box, Lozano is in a perfect position at the back post to score, which he does. His ability to create the back post space should also be mentioned as he dropped off a yard or two to create the free space to run into. This an example of how Cadiz players make proactive runs in the area so that they can score from loose second balls in the area, they won 44% of their loose ball duels, one of the best success rates in Segunda Division last season

Cadiz have also shown to score well worked free-kicks. This section will analyse two of their free-kick goals, and how they attack their free-kicks in a similar way to their corner kicks.

Cadiz manager Álvaro Cervera’s tactics encourage crossing of the ball as much as possible having crossed 17.43 times per 90, the most in Segunda Division last season. When Cadiz win free-kicks in wide positions they are most threatening as it is a dead-ball cross and they excel in crossing, their squad scored 18 headed goals last season as they perform well from high crosses.

The first free-kick is against CD Tenerife and the visual below displays the player positions pre-corner. 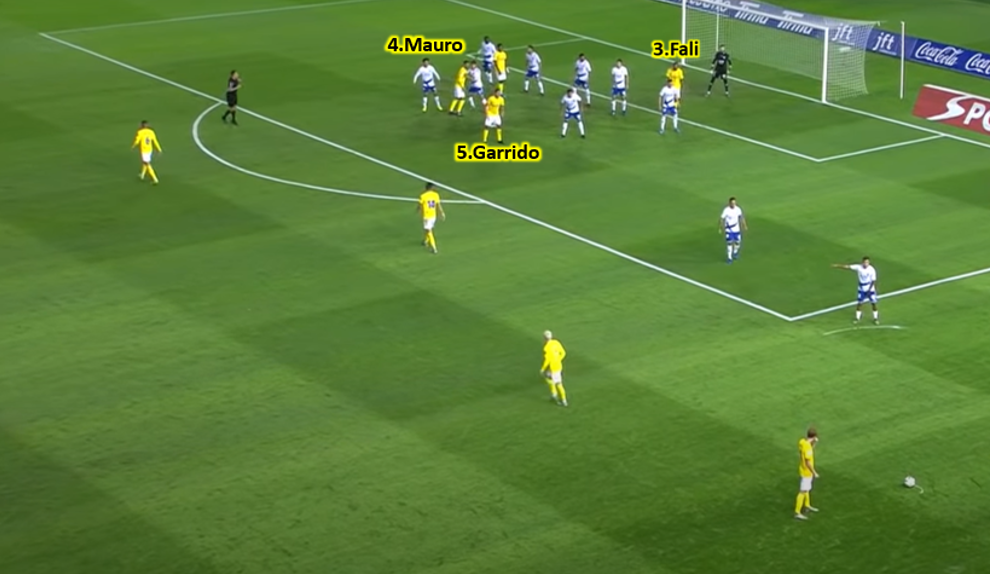 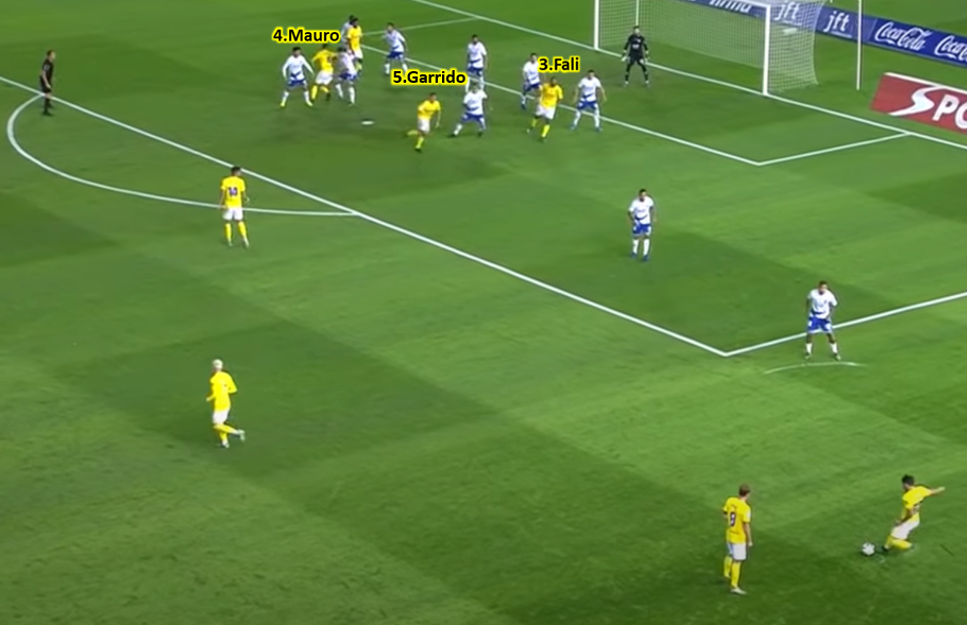 The aim of directing the free-kick near the front post is apparent, Fali and Jon Garrido attack the front post area, to increase the likelihood of a Cadiz player winning their duel to flick the ball on.

Marcos Mauro’s movement is key for the goal as he made a far post run, this allowed him to gain a yard ahead of his marker to attack the ball. 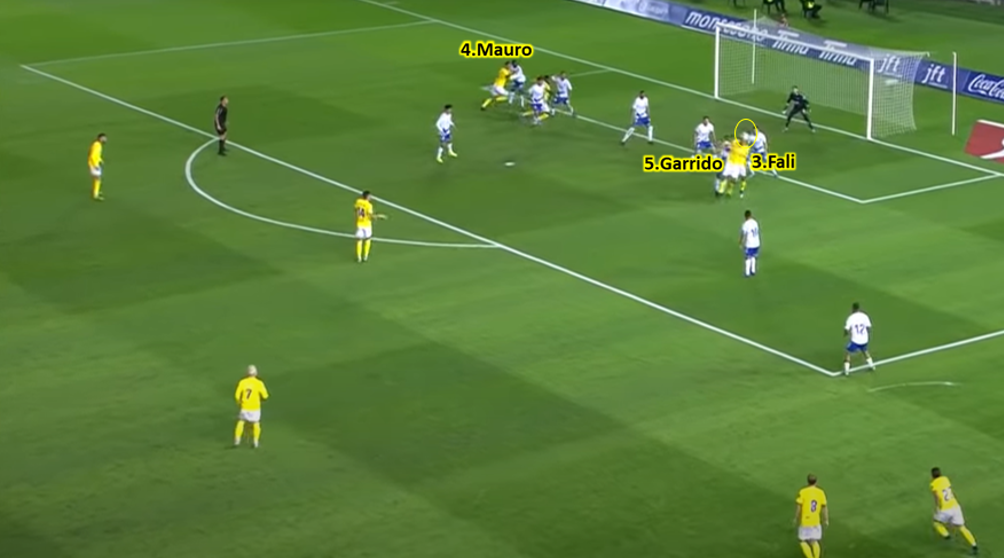 Garrido and Fali attack the front post, Mauro lost his marker to cause confusion in the CD Tenerife defence. Garrido won his flick on and Mauro scores from the position in the visual, as the flick on reached him.

The movement of Garrido and Fari also created more space in the mid and far post zones for others to attack the ball as they attracted Tenerife CD defenders away from this space. This allowed Mauro to capitalise from the flick on.

The next example is against CD Mirandés and another in-swinging free-kick, like the previous example, the Cadiz attackers line up in the near to front post area with one player, Lozano this instance, in the goalkeeper zone.

The visual above is the Cadiz players’ positions pre-corner and below will highlight the brilliant movement that can cause confusion for La Liga sides when they defend corners against Cadiz.

Lozano and González made the front post runs and this allowed them to cause confusion in the CD Mirandés defence, as one of the defenders that tussled with them is unbalanced and flicks the ball towards the front post.

This set piece analysis has analysed Cadiz’s strength in attacking set pieces and how they could look to take advantage of this in La Liga, especially against sides such as Barcelona that like to hold possession. Many of Cadiz’s goals stem from Cadiz players attacking the front post, they look to take advantage of this in corner and free-kick situations. Their off the ball movement is also apparent from this tactical analysis as those that occupy positions in the goalkeeper zone and move away from this when the ball comes in can create space for others to run into. The runners towards the far post were also highlighted also.

It is likely fans of La Liga will see well-worked Cadiz set piece goals this season, though, they will need to be well worked as the defences are even stronger in Spain’s top division. Zonal marking systems would have to be wary of the Cadiz player overloads in the front post. The addition of ex-Manchester City forward Alvaro Negredo will help Cadiz become even more dangerous from set pieces as he is an aerial threat, having won 2.90 aerial duels per 90 last season. 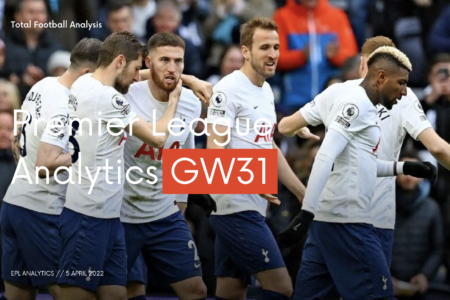 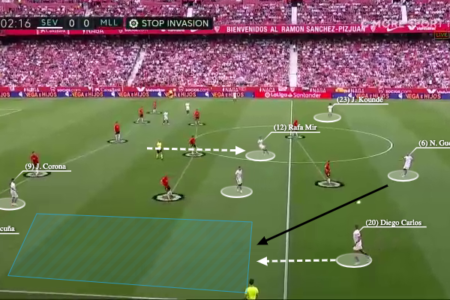 As the La Liga 2021/22 was proceeding to the final stage of the season, Real Madrid secured the title and […]