Newly promoted side Cádiz started their 2020/21 La Liga season with a clash against Osasuna at Nuevo Estadio Ramon de Carranza. Álvaro Cervera’s side, after finishing second in the Segunda División, came into this fixture hoping to upset Jagoba Arrasate’s Osasuna – a team that impressed everyone finishing tenth in their first season after promotion.

Eventually, Osasuna managed to edge past the newly promoted side 2-0, with goals from Rubén García and Adrián López. In this tactical analysis of one of La Liga’s inaugural fixtures, we’ll look at how Cádiz tried to build-up and use their wide players, but failed to utilize the central space. In addition, the analysis will go through Osasuna’s tactics of creating and using central spaces while utilizing Cádiz’s shortcomings.

Cádiz started with a 4-2-3-1 with José Mari and Sergio González as the double pivot. Former Manchester City forward Álvaro Negredo started as the sole striker, supported by Jorge Pombo and Salvi Sánchez from wide areas. 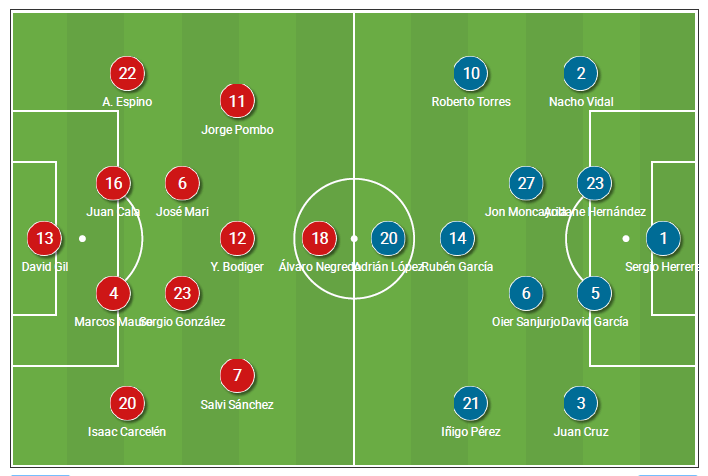 Arrasate’s Osasuna deployed a 4-4-1-1 with an occupied midfield and a comparatively solid back line. Rubén García and Adrián López led the attack up front with Roberto Torres and Iñigo Pérez starting from wider positions to facilitate the duo.

Cádiz’s shape and emphasis on the width

In their first domestic match after promotions, Cádiz’s build-up was more focused towards using wide players like Pombo and Sanchez to advance the ball towards Negredo. As a result, the 4-2-3-1 was rather asymmetrical, as Cádiz were inclined towards creating an overload towards the ball. 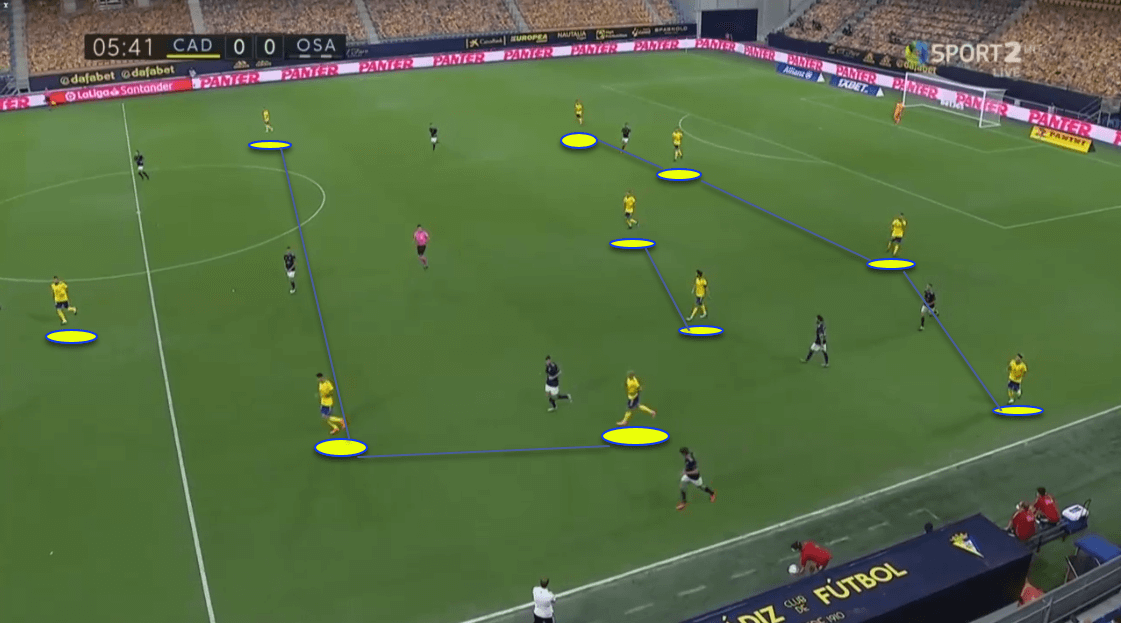 Although the intention was to overload the active side, Cádiz made sure the opposite space was always occupied and tried to play in the wide space whenever they regained the ball. The instance above shows a similar situation. Two players are closing in towards the left, whereas the right side is occupied and the player is in space to capitalise.

During the build-up, playing the ball towards Sanchez was a common sight. As he always occupied the wide-right, he was often free and received the ball in spaces. 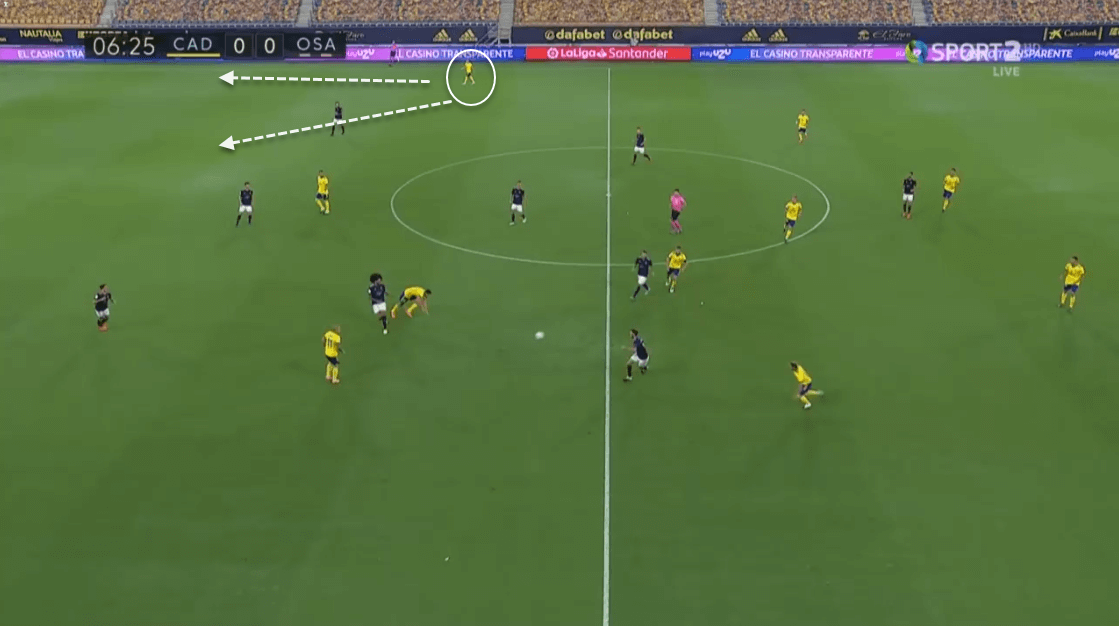 Like we can see here, Sanchez was given the freedom to wait in the wide side to make either inside runs towards half spaces or wide runs to land in crosses for Negredo when he got the ball. This also was an attempt to draw a man towards Sanchez to create space for Negredo in the centre. 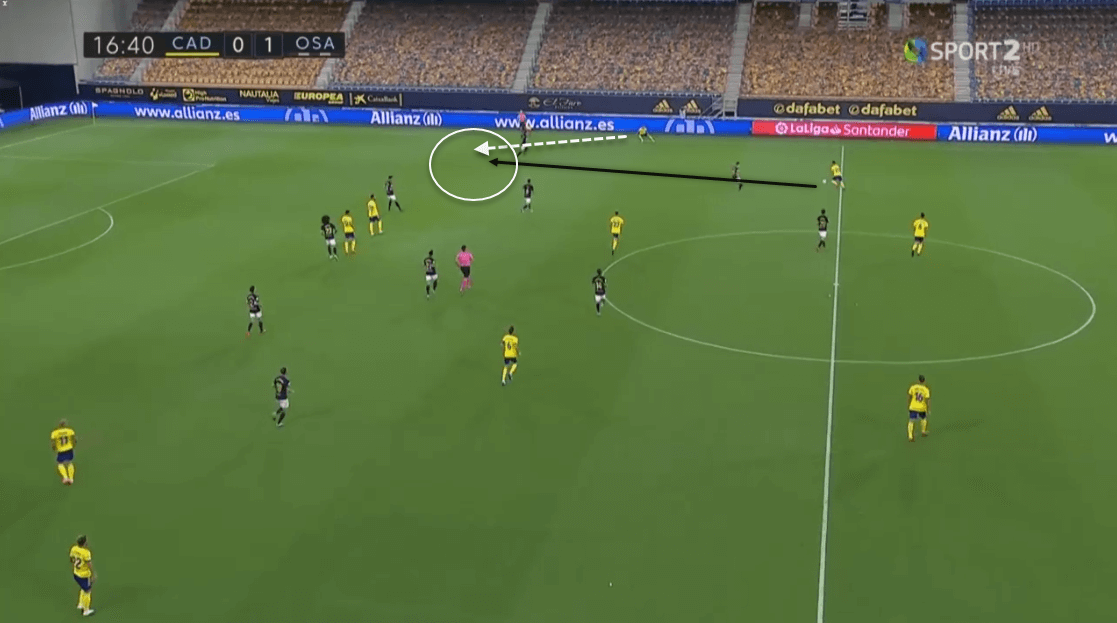 Like we can see in the above instance, Sanchez is being released by the full-back, playing a through ball for him to make run towards it. The width, both towards left and right, was a major place for Cádiz’s build-up.

Cádiz’s attempts of playing in the wide areas were successful to some extent. However, the progression was not as effective, as Osasuna were able to nullify crosses and isolate former Real Madrid man Negredo. As a result, although the majority of Cádiz’s build-up happened from the wide side, the ineffectiveness and failing to utilize the striker made things worse for Cádiz.

Cádiz’s intentions of playing from the wide and finally land some balls for Negredo to utilise was not effective throughout the match. Due to Osasuna’s organized defence and lack of proper execution, Cervera’s approach looked blunt.

As we can see from Cádiz’s pass map, passes to the lone striker (number 18)  are sparse. The only reliable channel of supply to Negredo comes from Sanchez only, whereas Negredo’s other passing activities include him passing towards Pombo and Bodiger. The ineffective service towards Negredo was mailnly caused due to the midfield players not being able to pass into spaces created by Negredo’s off-the-ball movements. 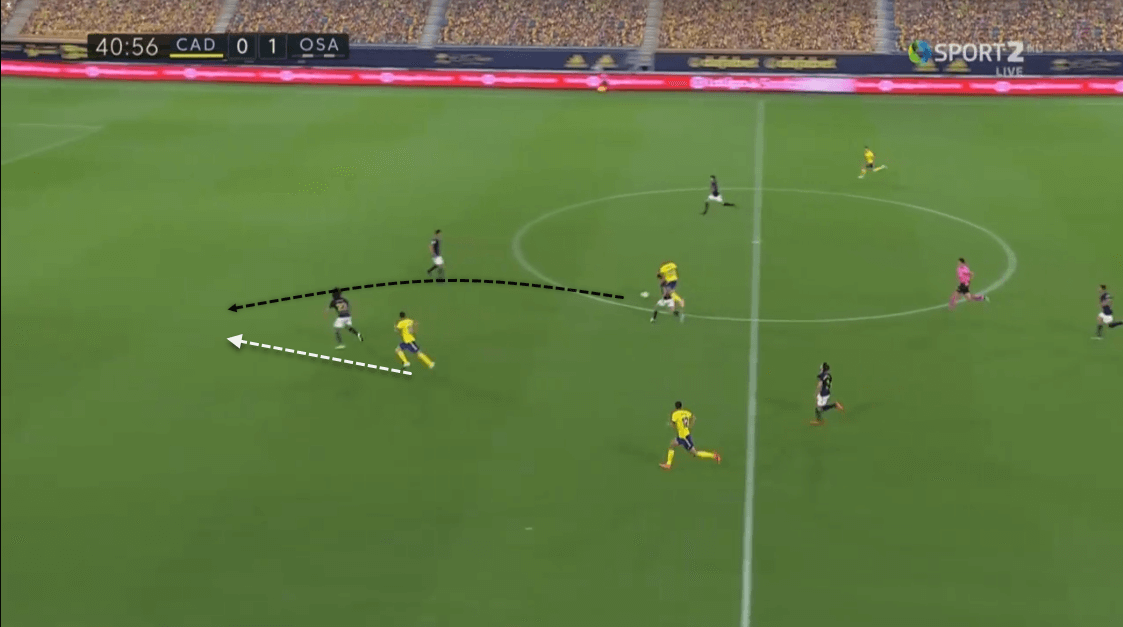 This instance five minutes before the half time shows Cádiz winning the ball back just at the half-way line. As we can see, Negredo is well aware of the space in front of him, and knows that getting past the man ahead of him will create a 1v1 against the keeper. However, for that to happen, a proper pass from the ball carrier to meet Negredo’s blindside run is needed.

Idealistically, this is a scenario where Negredo should at least have a shot on goal after a decent pass towards him. Instead, a poorly executed pass causes the attack to break down and allows Osasuna to flood in defenders towards the box. 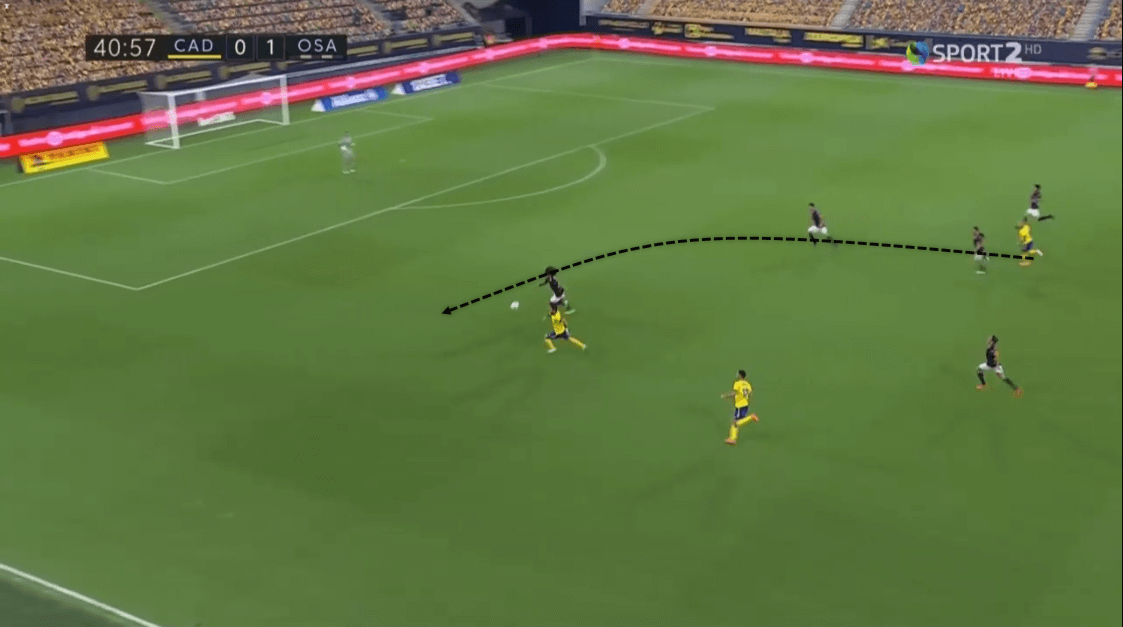 The pass is poorly executed, and instead of aiming a shot on goal, Negredo is forced to wait for his teammates to arrive inside the box to deploy a cross. Since Cádiz were not flexible enough to try alternative approaches to feed the target man, instances like these kept happening. As a result, despite having an xG of 0.52, more than that of Osasuna, Cádiz were unable to use their strength up front.

Osasuna capitalized Cádiz’s intentions of playing through the wide areas and their central weaknesses to win balls at the central spaces. They were quick in transition and created shot-taking situations from duels won in the middle of the pitch.

The highlighted area is where Osasuna were able to win majority of their duels and could transition their attacks. Similarly, Cádiz’s approach of always placing a man wide made them numerically inferior in the middle, whereas Osasuna were always rigid to their four-man midfield with occasional service of the two forwards. As a result, the duels were effectively transitioned into counter attacks or dangerous runs into spaces.

Osasuna’s opening goal came in a similar fashion – they won the ball in the middle, and utilized López’s run into space to score. 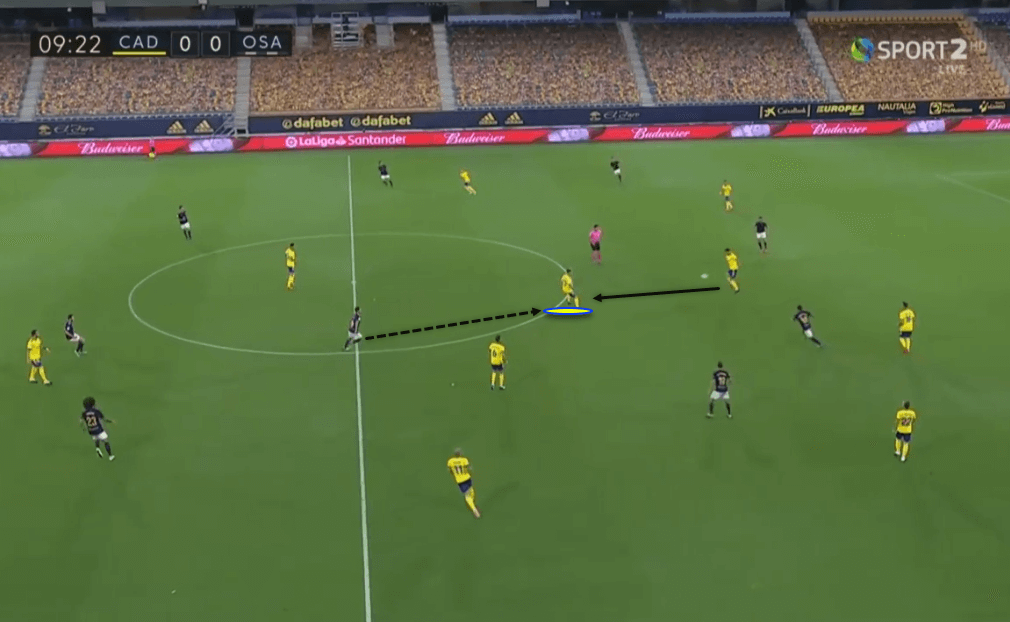 During the build-up, we can see the opposition passing to one of defensive midfielders to either progress the ball or execute a pass into one of wide players. However, Osasuna are seen pressing well, and the player approaching the pass-receiver is ready to disposses him. Eventually, Osasuna are able to win the ball back. 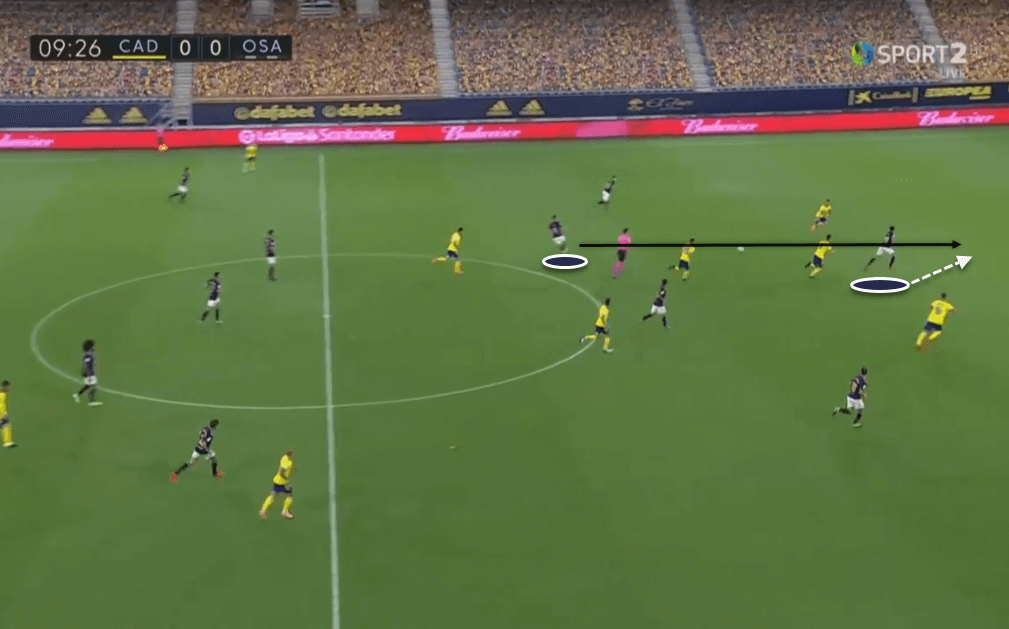 After winning the ball back, López run towards the space. By executing a through-ball that meets López’s run perfectly, Osasuna place themselves in a formidable position upfront. After a touch to take his markers off, López is able to capitalise and score the opener. 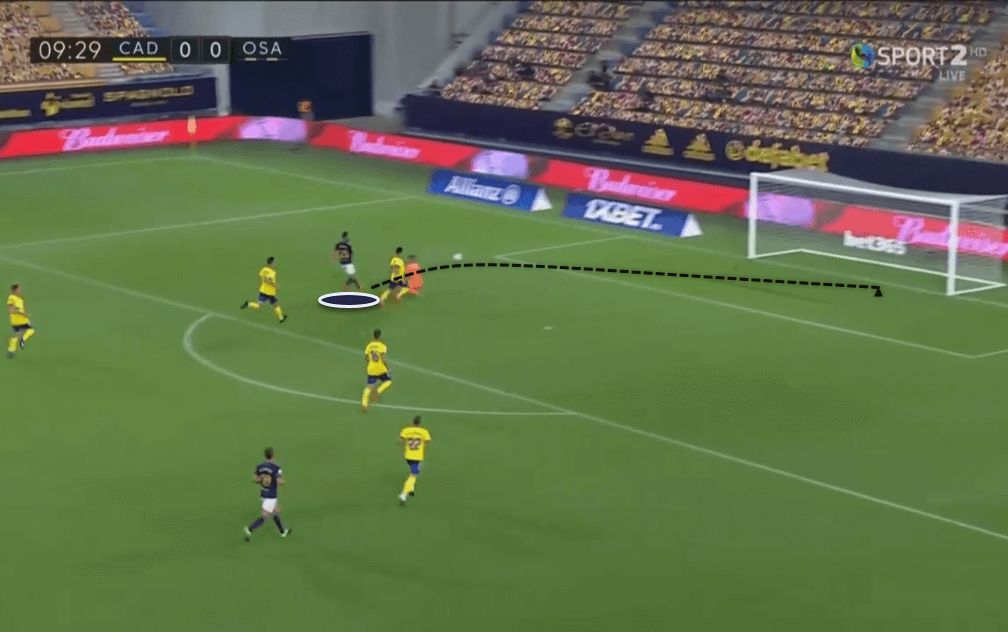 One of the major tactical tweaks behind their central dominance was the tendency to win the ball directly from the opposition build-up. Osasuna’s central overload can be seen in the following instance, where they try to leave a mobile man in the middle to have a numerical advantage. Every close passing option is well covered by Osasuna players, and the man in the middle is able to position himself according to the decision that the ball carries takes. The only option left for the ball carrier is to pass it towards the wide left, which has more room for error. 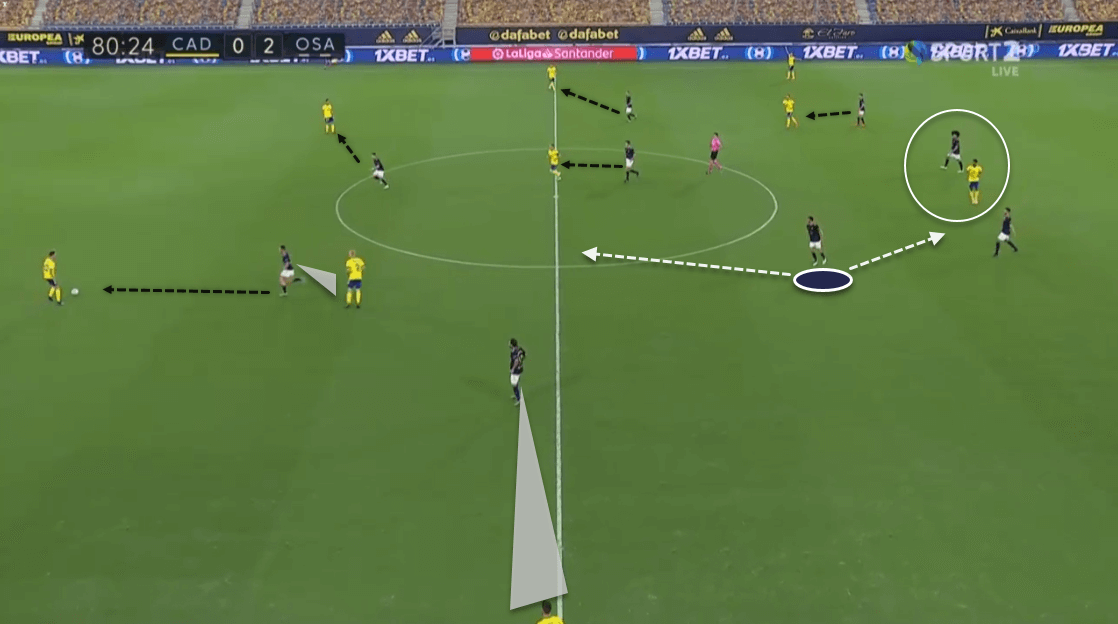 Similarly, Osasuna’s effectiveness in the central spaces doubled to limit Cádiz’s central presence. As a result, Cádiz were unable to utilise the middle, whereas Osasuna were usually dominant and had 10 attempts starting from the centre.

In general, Osasuna were the superior team in this clash, not just because of the results, but also due to their organisation during the build-up. Making use of their four-man defensive line, Osasuna worked to stretch Cádiz’s press to create spaces throughout the pitch. One of the frequent uses of spaces was to advance centrally, while the other was to switch and advance play from the right, as we can see in the attack map above. 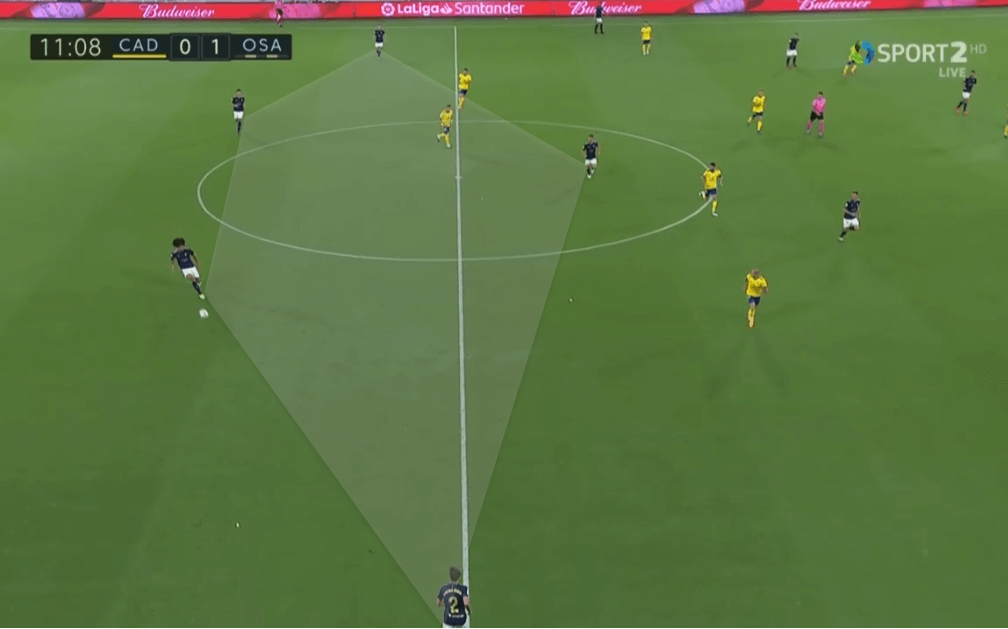 During the build-up, one of the midfielders always remained close to the backline that was wide to stretch the press. The presence of this deep-lying midfielder allowed Osasuna to have a point of transition through which they could afford to look out for spaces in the advanced areas of the pitch. By spreading the press, Osasuna made things easier for themselves, as drawing men wide created spaces for them to pass in the centre. 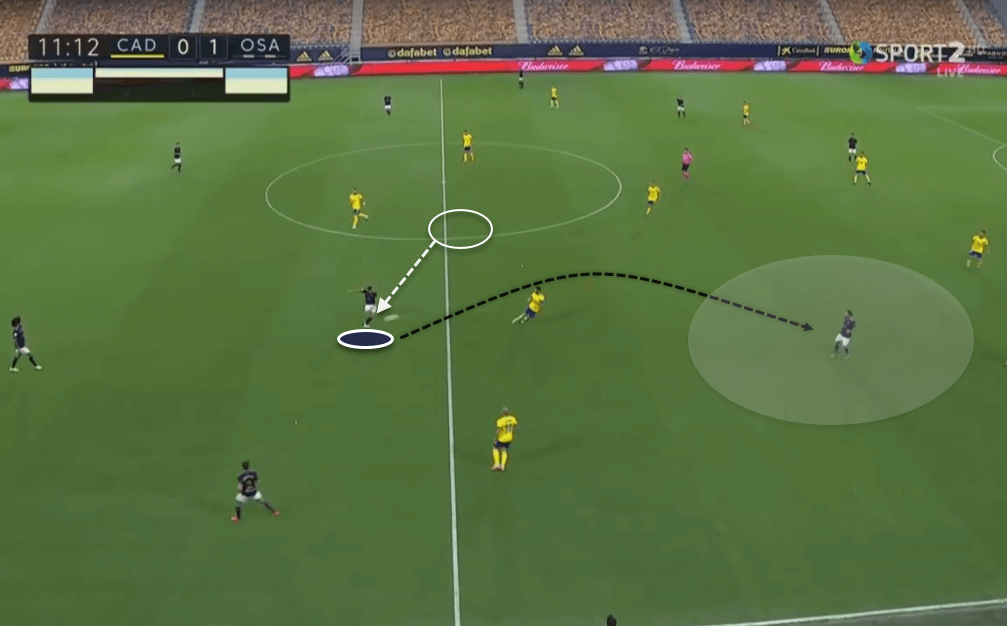 Like we can see in the pictures above. After drawing a man towards the right-back, the deep-lying midfielder comes into play. The man, after committing to the midfielder loses the player that’s just behind him in an advanced space. In this way, Osasuna created and used spaces to advance through the line.

While this was one approach of creating spaces, Osasuna’s players were always using their body positioning to put themselves in spaces. This allowed Osasuna to have free men all around the pitch, occasionally allowing them to switch play and not fall into Cádiz’s overload towards the ball. 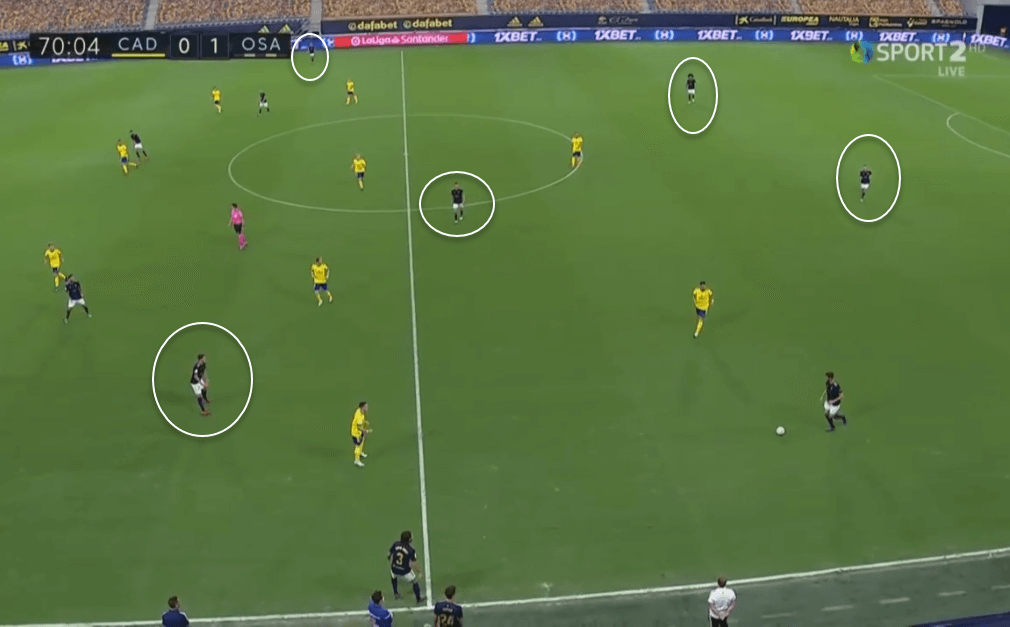 Like this instance shows, Osasuna players placed themselves between the Cádiz markers, and their constant movement allowed them to have an edge over the opposition. We can clearly see Cádiz intending to create an overhaul towards the ball here as well, and by inviting them to do so, the player on the ball is intending to play towards the other side to find space and catch Cádiz on the left side. 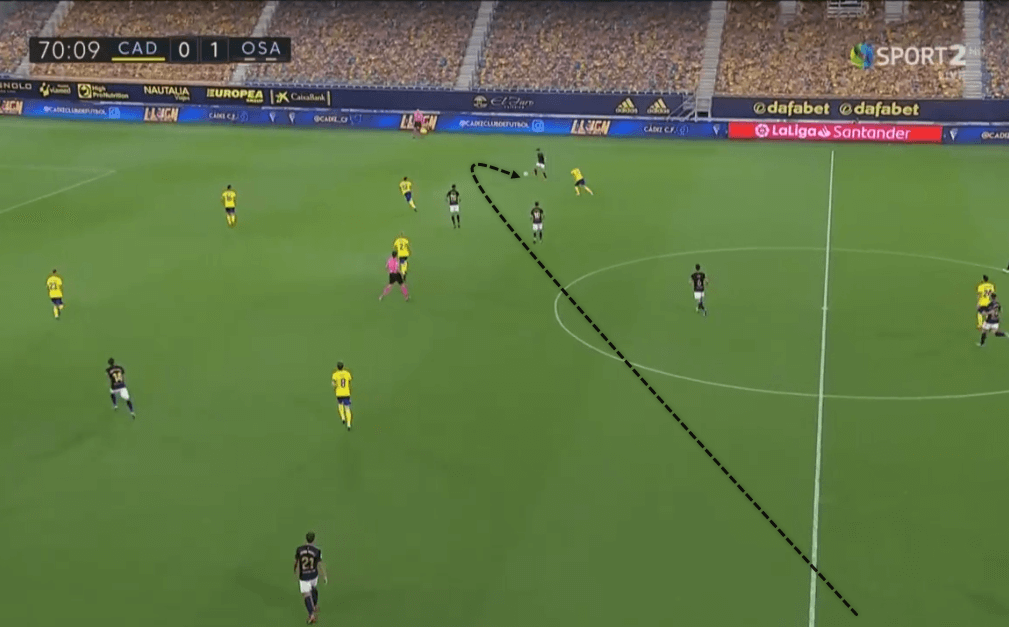 A long pass into the space, and Osasuna are now in a position to flood players in the middle of the pitch to expect a ball from the right side of their attack. Cádiz allowed actions like this too often, and as a result, 66% of Osasuna’s attack developed from the right side. These spaces that Osasuna were able to create and utilise became the main reason behind their win over the newly promoted side.

Although the game was not intense and quick, it had lots to do with managers trying to create spaces and occupying them with their own players. While Cádiz failed to execute it, Osasuna hit where it hurt by overloading the centre and creating spaces with their positioning and build-up play. Like this tactical analysis pointed out, Cádiz will have to work a lot on the execution side of things, whereas Osasuna will look to build their campaign based on this win.