It was Zinédine Zidane’s 88th Real Madrid victory in the La Liga. Real Madrid had a disappointing midweek game in the Copa del Rey as they were knocked out by Real Sociedad. In this fixture, they travelled to El Sadar and challenged Osasuna.

Osasuna were 11th of the table before this game. In their last four league games, they only had one loss. They had been knocked out by Sociedad at the round of 16, so they had more time to prepare for this game.

In this tactical analysis, we will show you how Madrid beat Osasuna. It is an analysis that focuses on tactics.

Jagoba Arrasate played a strong team against Madrid in a 4-3-1-2 formation. Chimy Ávila, their top scorer suffered from a cruciate ligament rupture, hence why José Arnáiz partnered with Rubén García. Marc Cardona was left on the bench. For the centre-backs, Aridane Hernández was suspended so Unai García took his position.

Madrid played in a 4-3-3 with most of the players that weren’t featured in the cup game. Dani Carvajal, Raphaël Varane, and Ferland Mendy returned to the defence. The midfield trio was formed by Casemiro, Luka Modrić and Federico Valverde. Both Gareth Bale and Isco started.

The build-up of Madrid vs Osasuna’s press

Zidane’s team tried to play out from the back, but their build-up was disrupted by Osasuna’s press. For Madrid themselves, as we can see in the below passing map, they tried to open their shape.

Mendy and Carvajal were the widest players on both flanks. The connections between Sergio Ramos, Varane, and Casemiro were weak in terms of their positionings and pass exchanged.

Apart from these, another pattern we observed was the linkages between the centre-backs and full-backs, it showed they were quickly moving the ball wide in the first phase of the attack.

This example illustrated the press of Osasuna. In the early stages of the game, they pressed high to disrupt the build-up of Madrid. They stuck to their 4-3-1-2 shape, with the attacking midfielder, Darko Brašanac marking the sole pivot of Madrid, Casemiro.

As a result, the Brazilian was isolated in the build-up. On average, he received 40.54 passes, but he only received 34 in this game. Madrid lost the option to penetrate through the centre. It explained why Ramos to Mendy and Varane to Carvajal were the most popular links in this game.

Except for marking Casemiro, Osasuna did well to force Madrid to go wide and then shut the ball side. As in this example, Varane passed to Carvajal and Arnáiz closed the Frenchman instantaneously while covering the centre. Therefore, once Madrid moved the ball wide, they could not return the ball to the centre, so the only option left was to pass forward.

Iñigo Pérez also joined the press by leaving his position to pressure the right-back. Carvajal had to go long and Osasuna regained possession. 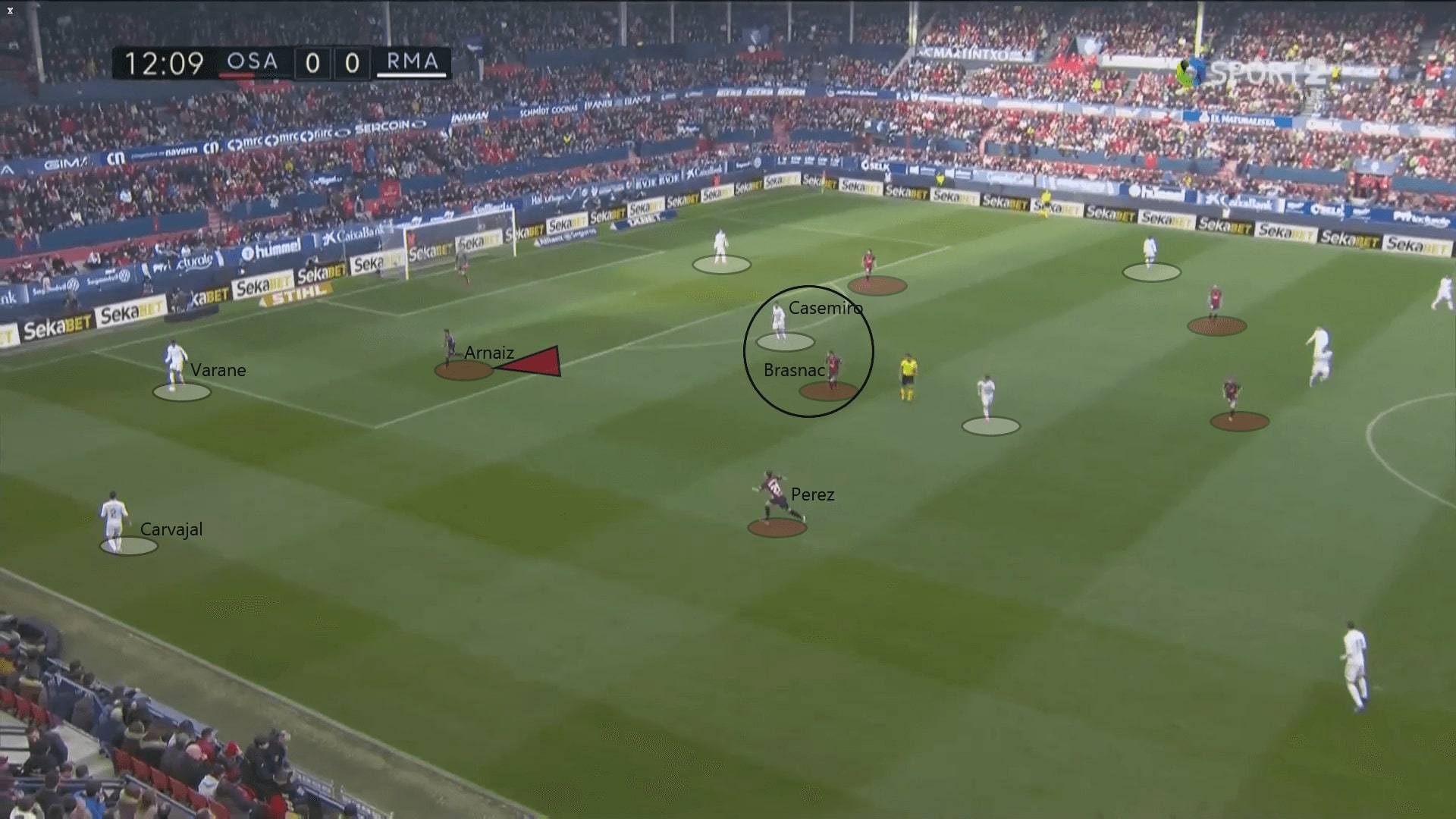 In the second half, Madrid tried to add an extra man in the first phase of their attack by dropping a player. This player could be either one of the advanced midfielders or Isco. As a result, they had greater stability with a numerical advantage in the build-ups.

In this example, Isco dropped to the centre with Casemiro, which allowed Varane to split wide with Ramos. It created a four v two situation in this area, and even though the skipper did not pass centrally, he could move the ball to his partner, Varane, smoothly. Madrid could progress on the weak side of the defence. 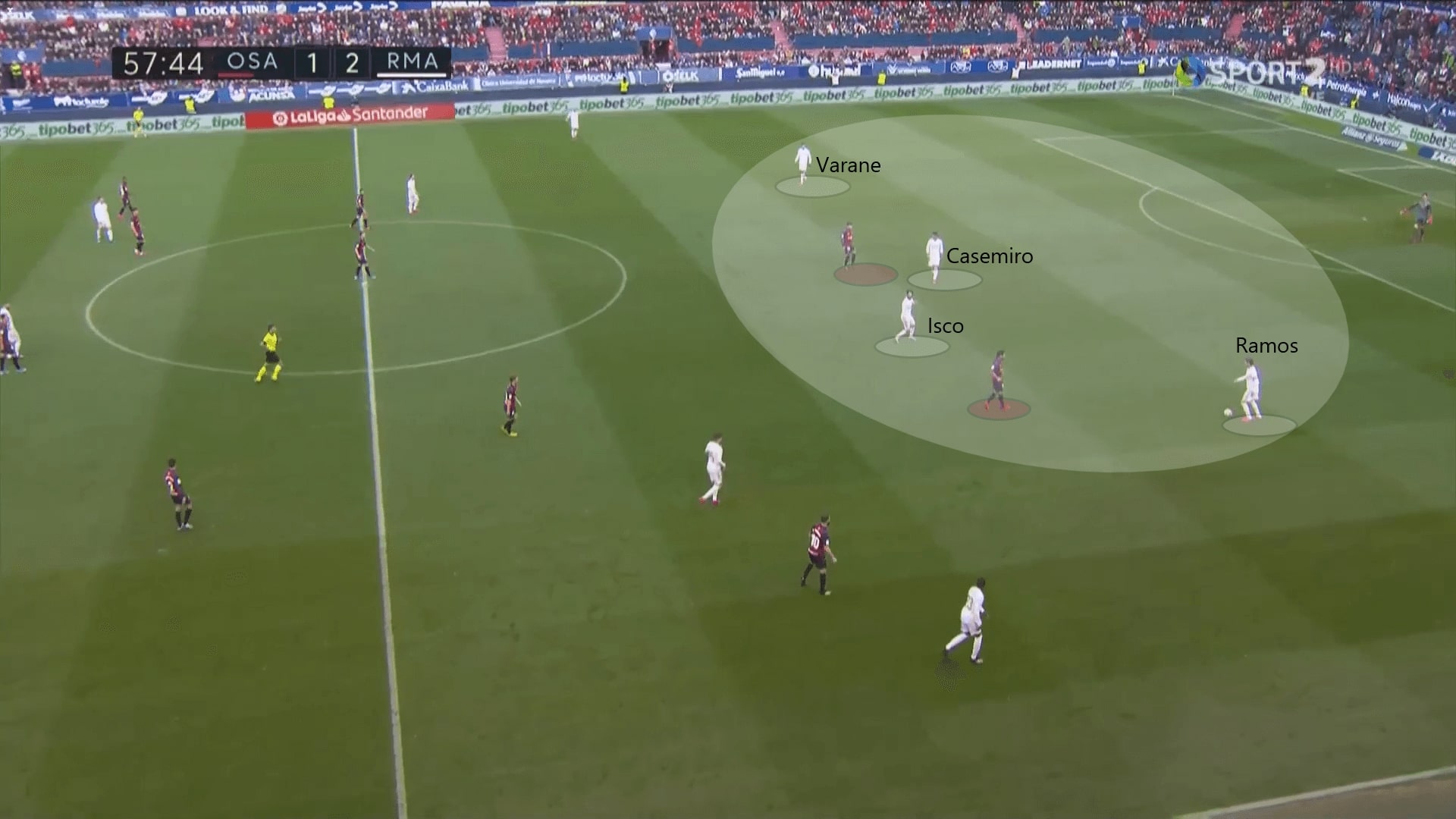 As they were forced by Osasuna’s press to the flanks, the biggest threat of Madrid’s attack was not in their penetration – instead, it was their crosses.

As mentioned, both full-backs pushed high and wide to provide the width on flanks. On the right, they had Carvajal, and the rest of the players would stay around on in the box to attack the goal.

In this example, Carvajal had the ball on the right, Bale and Karim Benzema were looking to receive his cross. Meanwhile, Isco stayed at the centre to provide a closer option or make late runs. 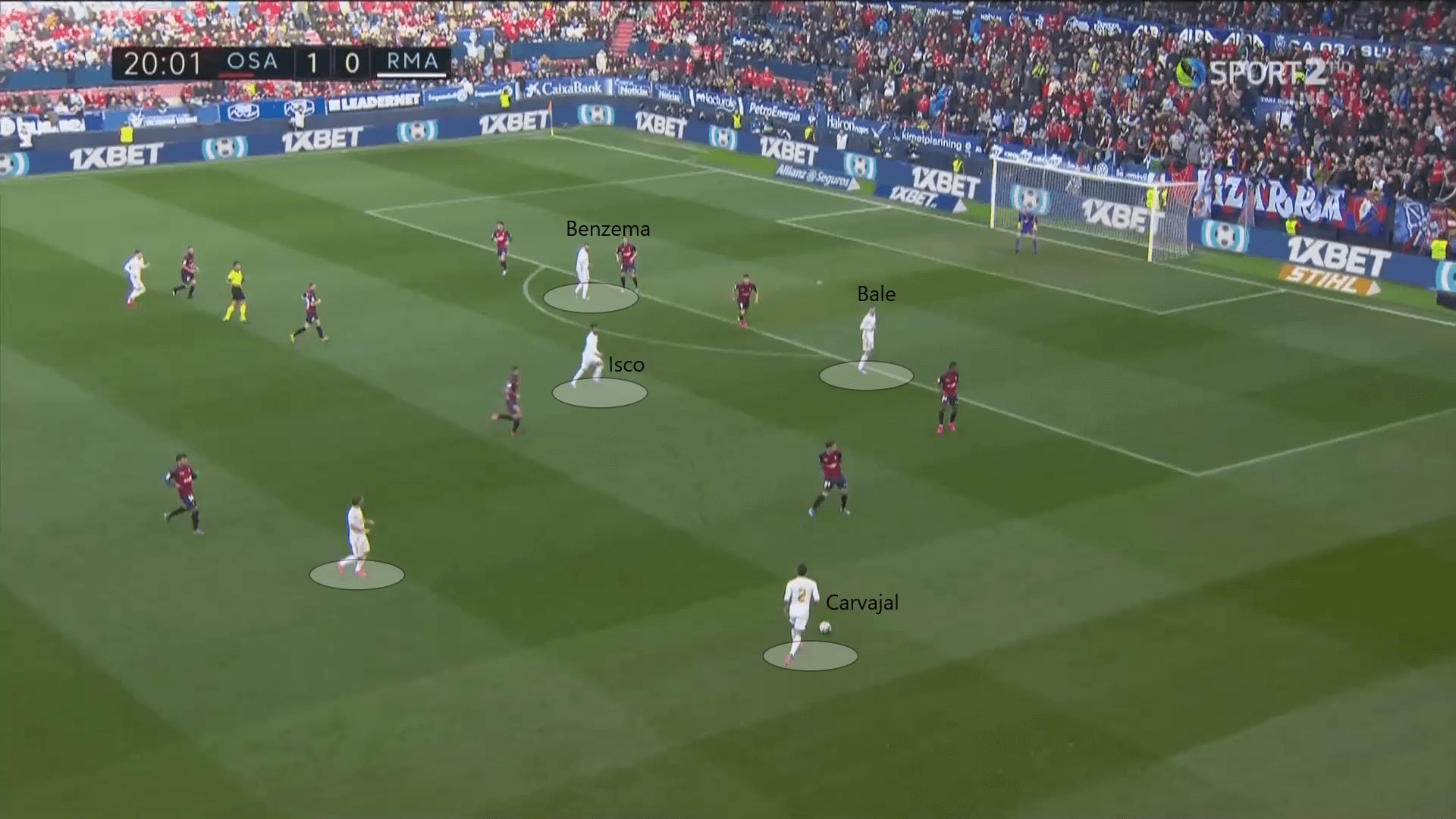 On the other side, this approach created a goal for Madrid. In this situation, Mendy came forward to provide the width which allowed Isco to stay at the half-spaces.

With the numbers forward to attack the box, Madrid also stretched Osasuna’s defensive line and created horizontal gaps between defenders.

The cross of the left-back did not reach Isco initially, but Madrid had enough numbers to attack, hence why Bale picked up the loose ball to shoot. Eventually, Isco’s good finish resulted in an equaliser.

In Madrid’s 19 crosses in the game, almost half, eight, of them were the contributions of Mendy and Carvajal. 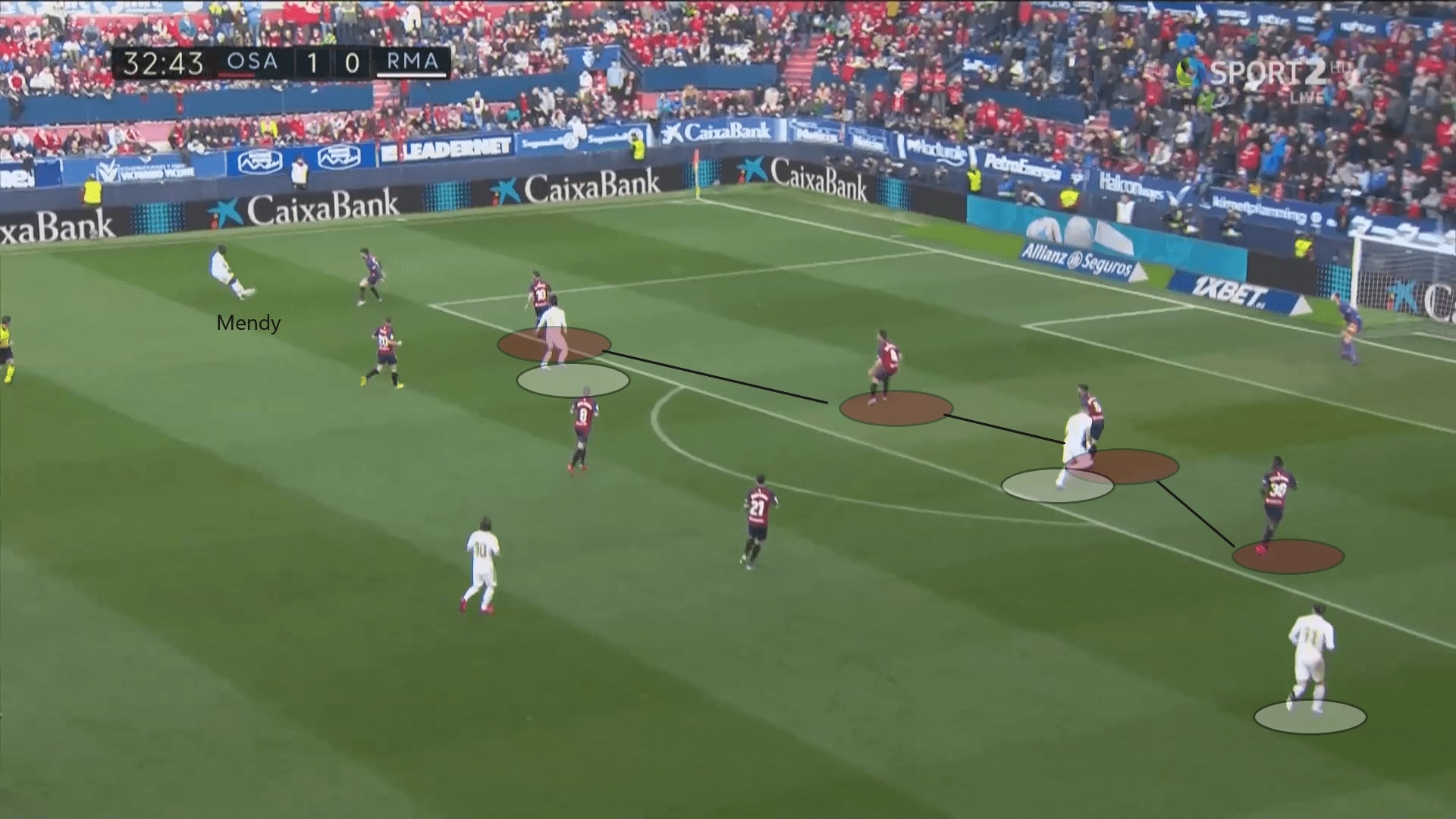 In this game, Isco shined and saved Madrid from a goal down. His contribution was far more than a goal.

In terms of statistics, he had two shots, two on targets and a goal; all of his three dribbles were successful; he won more than half of his offensive duels – nine out of 17; and there were three progressive runs as well.

Below is the heat map of Isco. Apart from his heavy impact on the left, he also covered many areas on the pitch. Some of them were even in his own box, and some in the central third.

His movements and presence turned him into an extra man in different areas, which helped Madrid to overload a certain area and provided a short option around the ball.

Also, Isco had 40 passes and completed 34 of them. Below is the pass map of the 27-year-old Spaniard.

From his directions and lengths of passes, we saw Isco attempted many types of passes in this game. Some of them were playing out wide to release the wide players, some of them were vertical passes to penetrate between players.

With Isco, Madrid had a moving creative force that appears on almost every part of the pitch.

Benzema in the transitions

He liked to run on the far side, usually behind the widest defender. This created two benefits in counter-attacks situations.

The first is for his teammates, as Benzema’s positionings stretched Osasuna’s defensive line and generated gaps between the defenders so it allowed Madrid’s supporting players to make forward runs to exploit those spaces. As shown in this image, Benzema created rooms for Lucas Vásquez in this attack.

For the second, he created another option for the cross. As Benzema stayed on the blindside of the defenders, he could attack the far post secretly. In case the cross came to the far post, Benzema could score an easy tap-in.

If the cross was being attempted between the defenders, Benzema could also change his direction and meet the cross as, from his position, he saw the ball clearly and he can predict where was the ball going to. 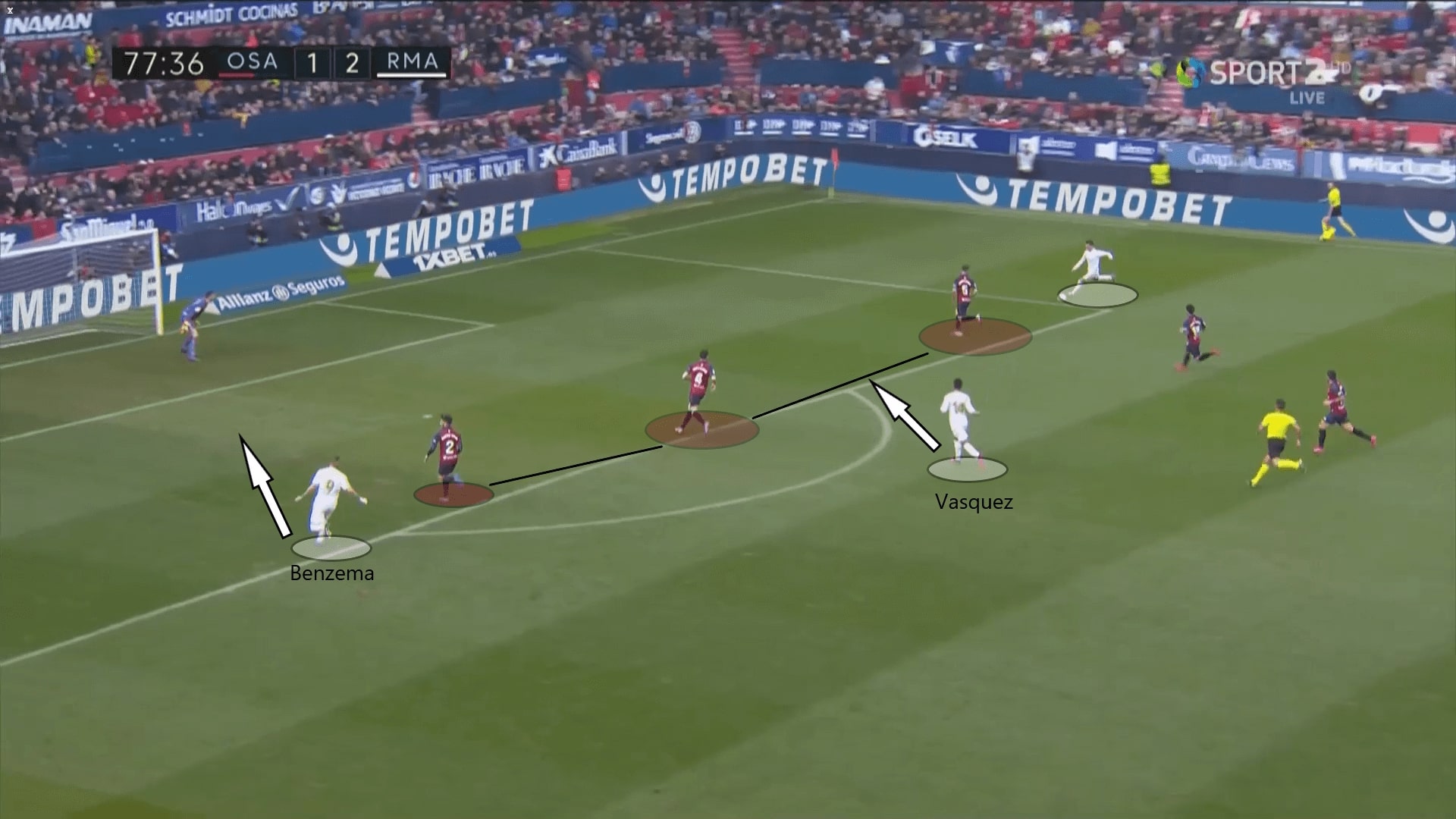 For Madrid, their defence had two phases in general. In the early stages of the game, their PPDA of the game, 7.3 was slightly lower than the season average. It means Madrid were pressing intensely to win the ball back.

For the first phase of defence, they set a high defensive line with Casemiro covering the spaces between or in front of the defenders. The three lines were not compact at all, but the most important thing was that they had a compact defensive line.

They had a rather lax defensive structure in the midfield, and the positionings of both wingers were the point as both Isco and Bale, especially the latter, did well to track the full-backs.

In this example, Bale stayed deeper, on the same line with Modrić as he kept an eye on Pervis Estupiñán.

Since Osasuna tended to play long and directly, where even the midfielders did not press in a compact shape, Madrid did not suffer. 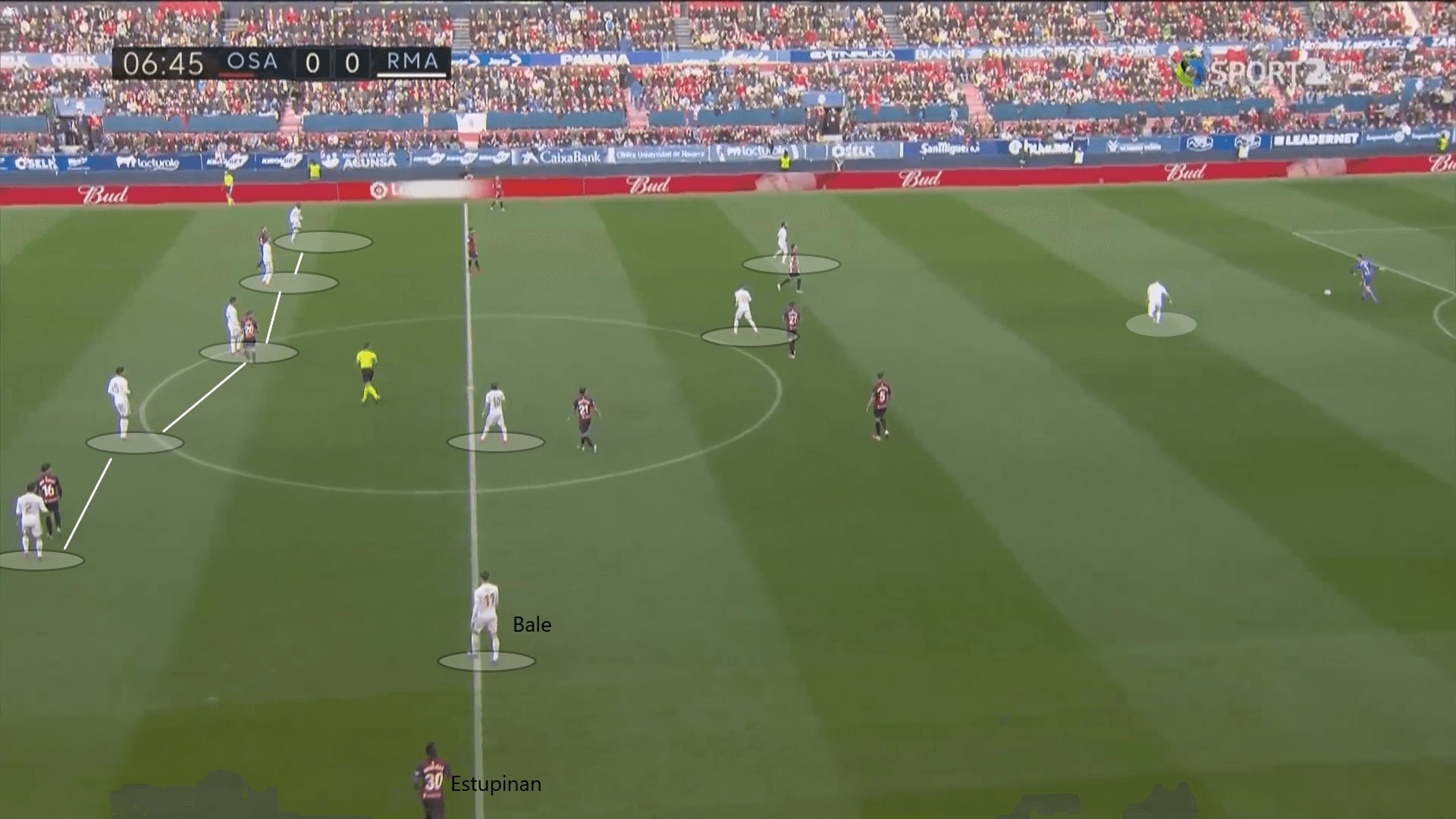 As the game went on, Madrid tried to protect the lead and retreated their defence deeper. They committed all men behind the ball except Benzema who was left at the frontline as the focal point of the offensive transitions.

This image demonstrated the midblock set by Madrid. They grouped their midfielders at the centre of the pitch to deny penetrations, with Casemiro dropping slightly deeper to protect spaces between the lines.

Again, we emphasised the defensive contribution of wingers. In this image, Isco also stayed deep to defend and kept Osasuna’s right-back Nacho Vidal under control.

Apart from the early chances and set-pieces, Osasuna hardly created clear-cut chances to trouble Madrid’s defence. The second half xG of the home team stayed at 0.47 only. 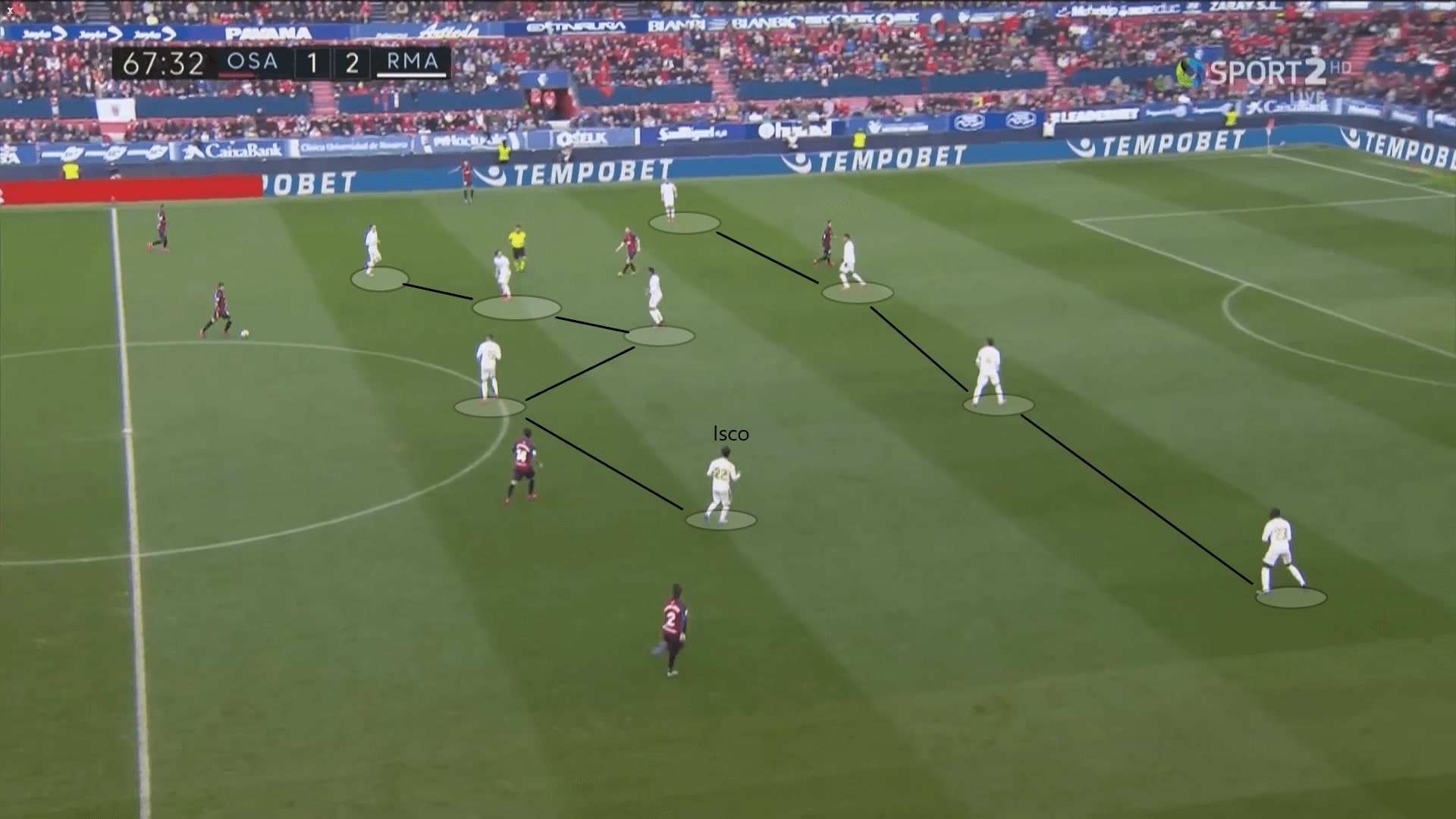 The direct approach of Osasuna

For Osasuna, they attacked with a direct approach in the early stages of the game. The game plan was to utilise the spaces behind Madrid defenders when they set a high defensive line.

For the front players, they were tasked to make forward runs behind the defenders – especially the half-spaces between the centre-backs and the full-backs. This approach created a couple of early chances in the game, as the xG of 0.65 from the total of 1.15 came from the first 20 minutes in the game.

In this example, it showed how Osasuna generated a chance with the long balls. David García had the ball without pressure, so he played long to find Arnáiz who ran between Varane and Carvajal. He received the ball in the box and attempted a cross.

However, when the game went on, Madrid’s defensive line stayed compact and the intensity of the press increased, so Osasuna hardly could play these balls to hit Madrid directly.

Perhaps it was an early scare for Madrid as U. García scored an early header. Despite not playing at their best, the Madrid players still possessed quality and they seized their chances. There are two more games in Spain before Madrid have to play against Manchester City in the Champions League, so Zidane would look to improve his team in all domains.

For Osasuna, this loss did not make huge damage on them, as they still sit 12th of the table with 28 points, 10 away from the relegation zone. They will regroup themselves and prepare for the game against Athletic Club next week.