RB Leipzig sit third in the Bundesliga table ahead of the league’s restart and have hit the ground running so far under Julian Nagelsmann. The joint best team defensively, Leipzig have stayed in and around the top of the table all season, playing some excellent football both in and out of possession. and especially in transition. But one key factor in their success this season is their threat from set-pieces, where again they are arguably the best in the league in this regard. In this set piece analysis, we will look at why Leipzig have been so successful from set-pieces, taking a particular look at corners and what tactics they use around them.

Before looking at how Leipzig are able to perform as well as they do from set-pieces, we’ll first look at the league data which justifies my statement of them being one of the best teams in the league from set-piece situations. We’ll start with the basic data of goals scored and goals against, before moving onto xG.

We can see below a chart for goals conceded from all set-pieces this season. Leipzig have conceded the joint second least goals from set-pieces with four, tied with Bayern and one behind Hoffenheim. We can see the worst teams in the league in this regard are Mainz and Werder Bremen with both in double figures. 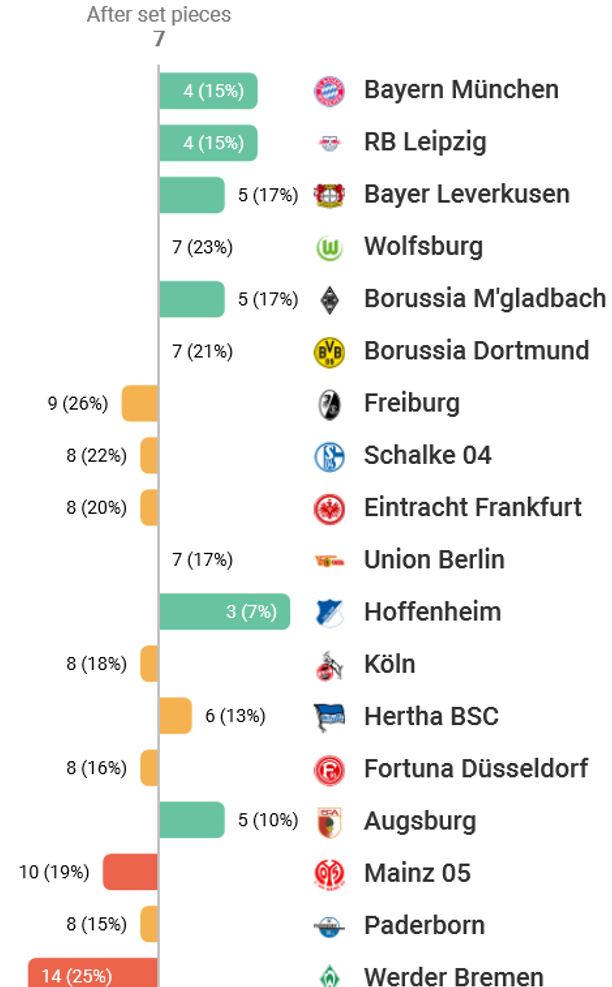 If we look at goals scored, we see Leipzig are still up near the top with the fifth most goals from these situations. Köln lead the way in this stat with fourteen goals, but have conceded eight as we can see above. Gladbach are also performing well in this regard, keeping up with Leipzig in both stats, while Union Berlin emerge in this as a good set piece team also. When we look at less basic stats we can see a better picture of which side is performing well. 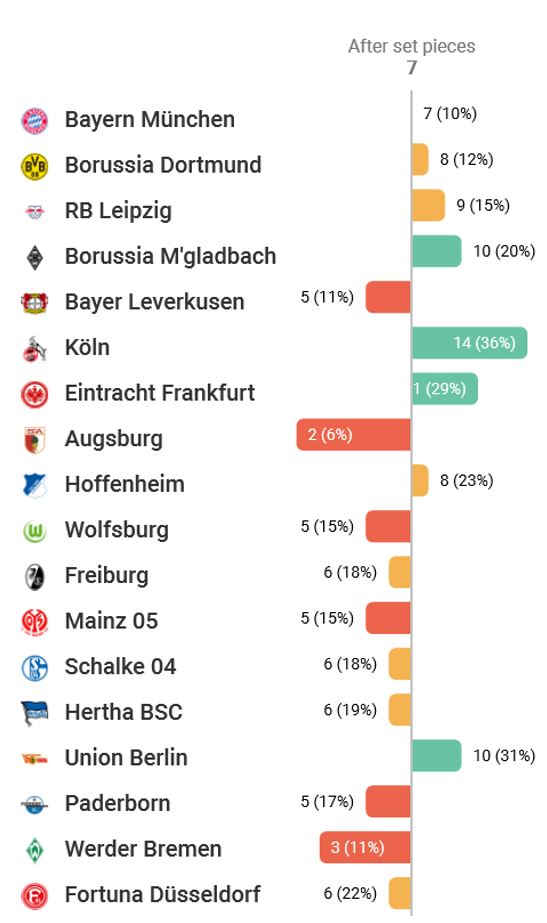 Below we can see a graph that I’ve plotted showing the corners taken by Bundesliga teams against their xG generated. The closer the xG line to the corners taken bar, the better a team is performing in relation to how many corners they are getting. Therefore, if the xG line exceeds the corners taken bar,  a team is performing very well or even over performing. Therefore we see our two best offensive teams in Union Berlin and RB Leipzig. Union have only taken 86 corners, but generated 3.93 xG, compared to the league average of 2.72, which also takes into account a higher number of corners taken. To put that into context, that is 0.23 xG generated per five corners. As a result, after I’ve written this RB Leipzig analysis, Union will certainly be next.

As for Leipzig, they have taken far more corners (125), and as you would expect have generated more xG with 4.82, which is a very high number for set-pieces, with chances usually having a very low xG value. To put that into context, Liverpool who are a massive threat from set-pieces, have only generated 3.20. xG doesn’t tell us everything however, so we’ll now use tactical analysis to analyse Leipzig’s set pieces. 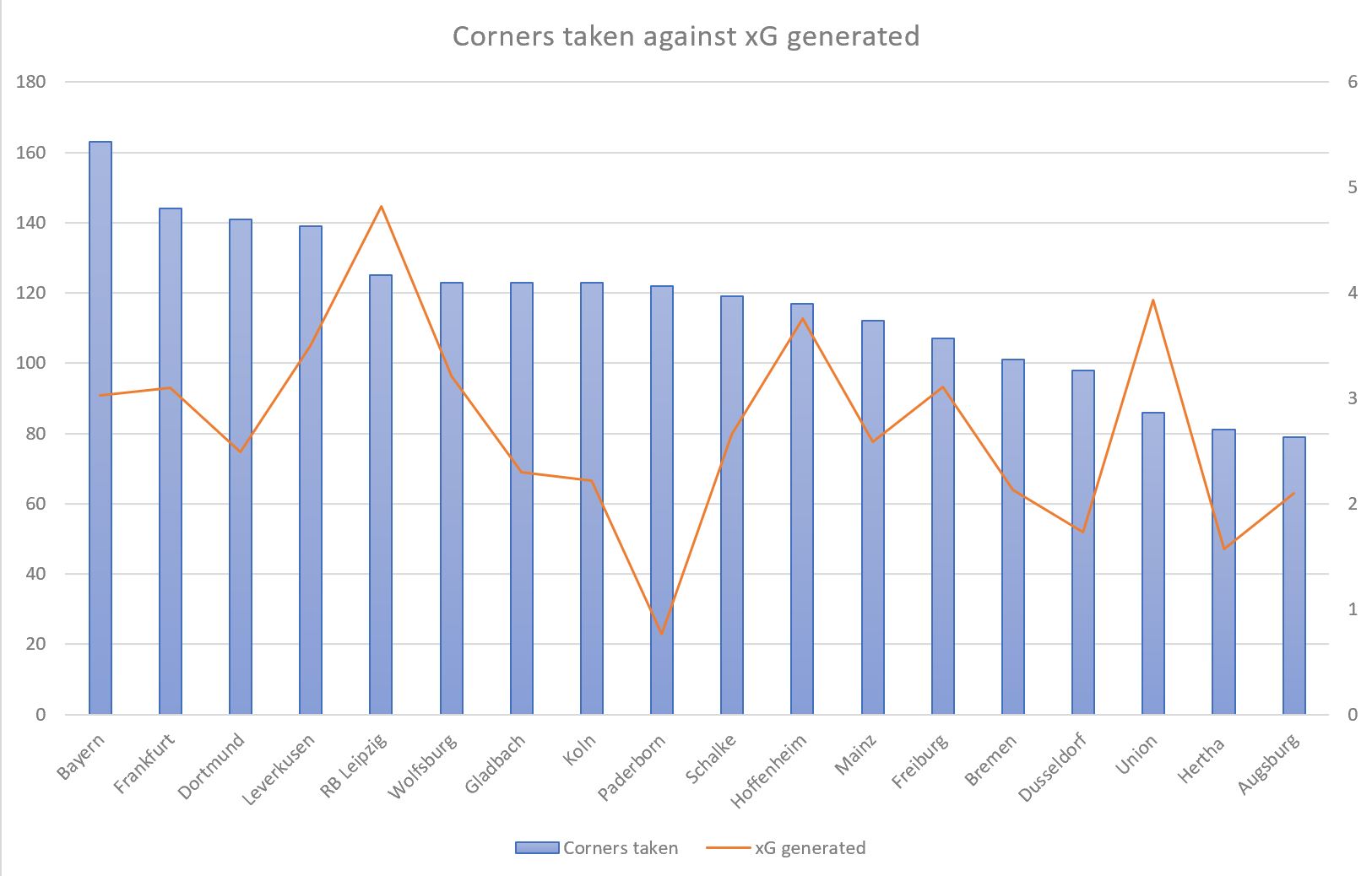 The key to such a high xG for Leipzig is their offensive movement from corners, and they use a variety of intelligent runs and movements in order to get the chance to shoot.

A common method they use is the use of blockers to create separation from markers. Patrick Schick is at the centre of many movements and is often a target player due to his good aerial ability and this example is no different.

Here, Patrick Schick starts as the player closest to the near post, while runners move towards this near post area. Augsburg’s man markers therefore follow, and Leipzig then underload the back post/central area. As a result, Schick then looks to move into this area. His man marker however, is blocked by the oncoming runners towards the near post. 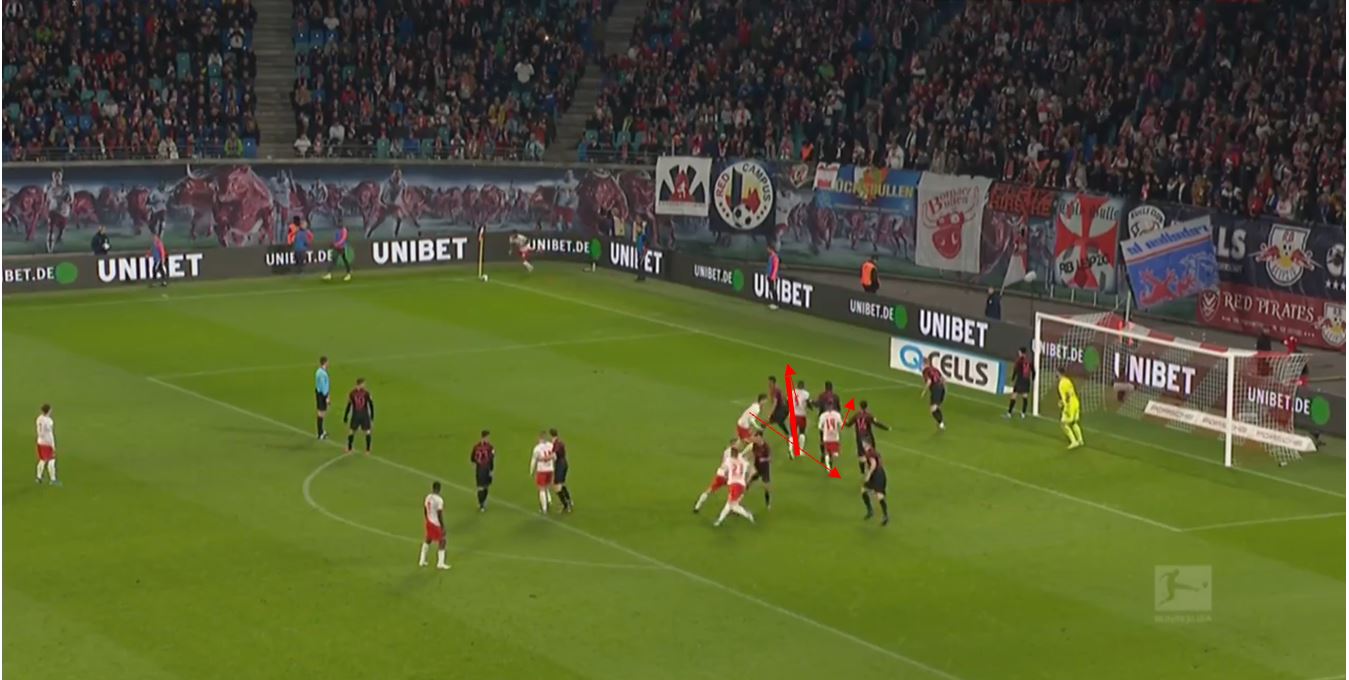 As a result, Schick is able to make a simple straight run into the vacated space, and his marker cannot follow as he is blocked. Schick is then able to score a free header in lots of space in the box. 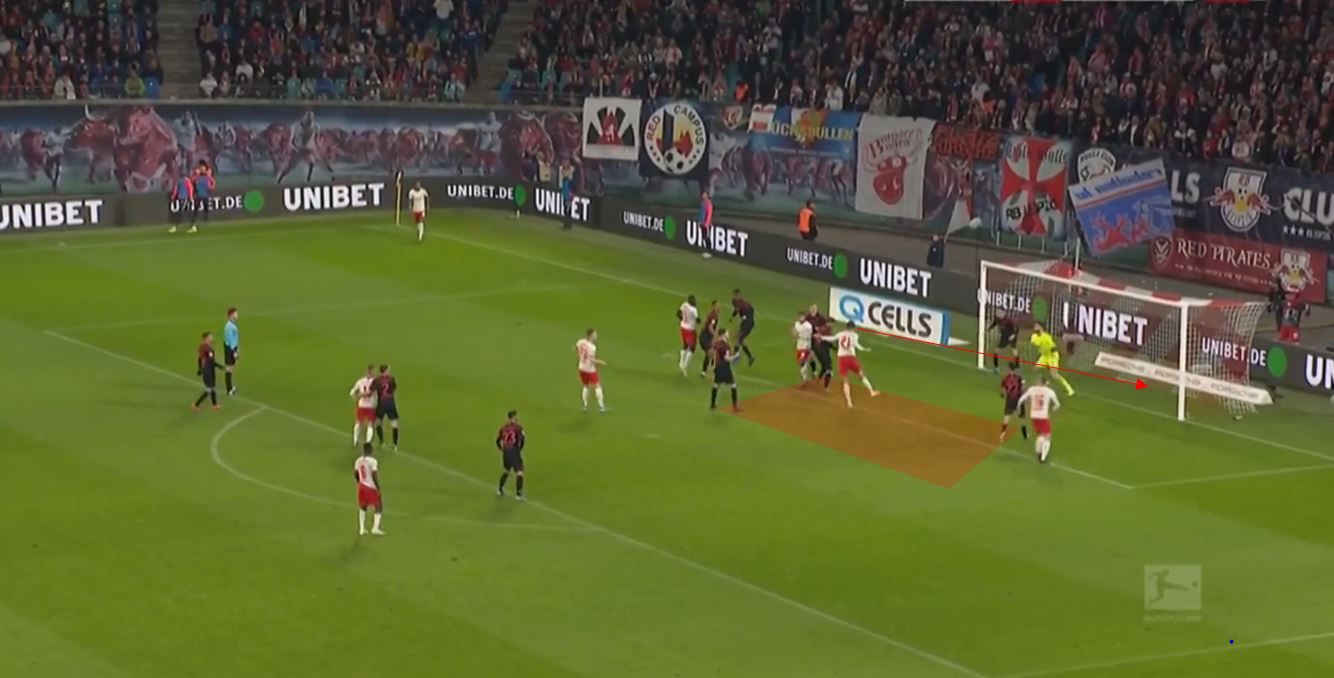 We can see a similar concept again, this time with Schick not as the target. Here, a block of players is created in the centre, and Dayot Upamecano makes a movement around the block to lose his marker. Again, his marker cannot follow as a blocker moves towards him and also because of the large group of players or traffic, that he has to get through. 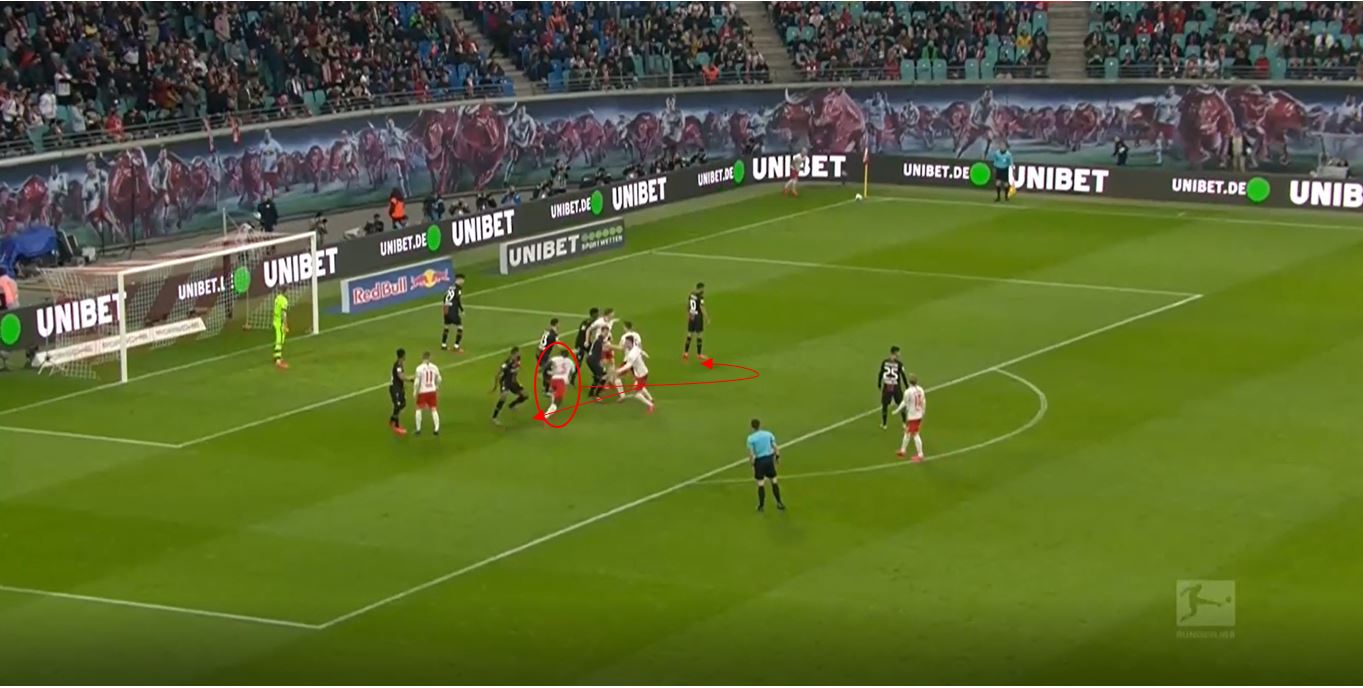 Upamecano is then able to create separation from his marker, with the hopes of having more space to win the header.

Here we see Schick and Upamecano combining another time, with one blocking in order to create space for another. This time Schick makes an arced run from the centre towards the back post, while Upamecano remains far side of his opponent and makes a run to the back post. Upamecano is then able to remain far side and block both his own marker and Schick’s marker’s access to the back post area. Schick is then able to win the header, which is well saved by the goalkeeper. 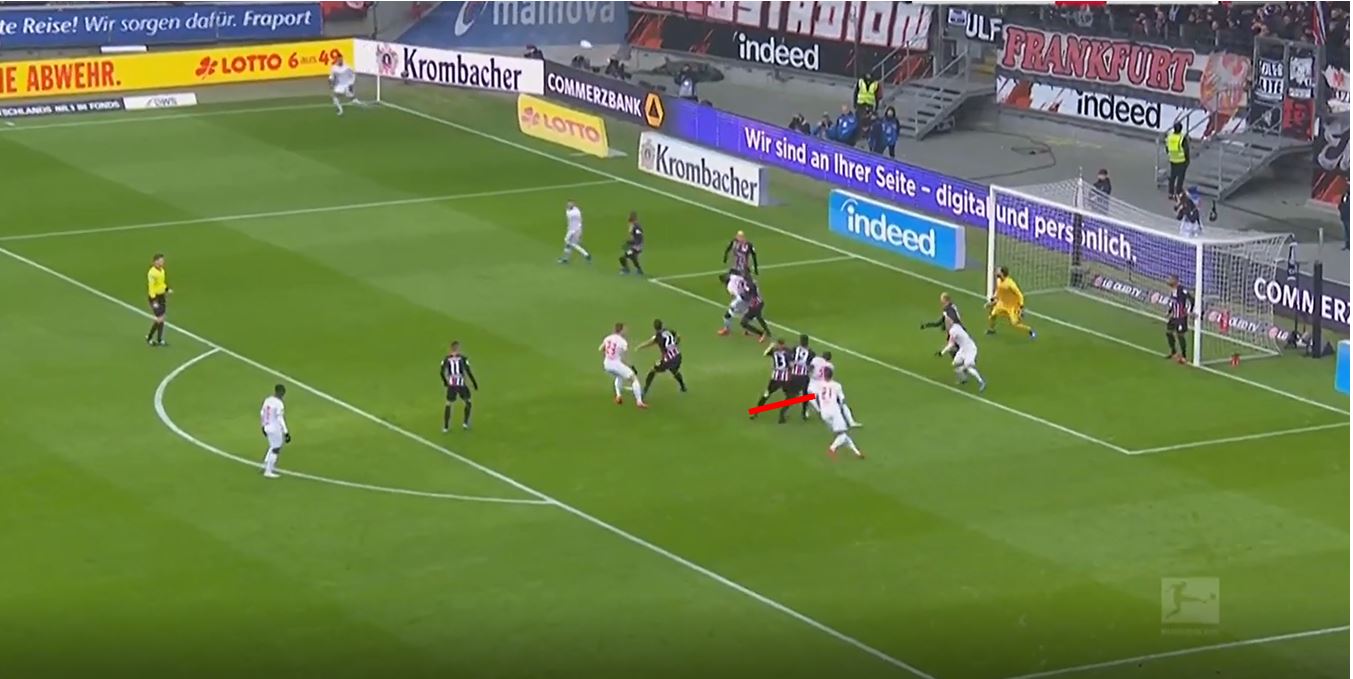 We can see this method of creating separation here, with two players making the same run and one looking to block the opposition’s access to the header. An outswinging delivery is used to gain better access to deeper player of the two. 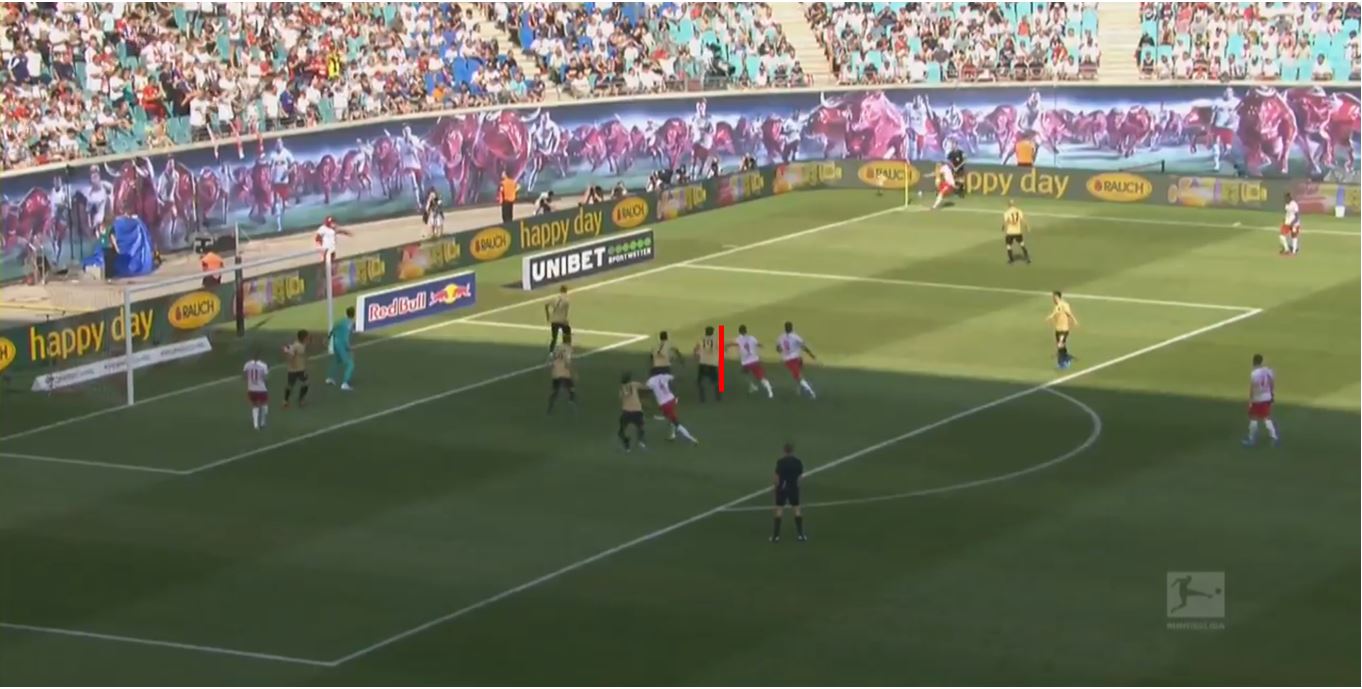 Leipzig will also use decoy movements and simply movements into correct areas in order to take advantage of spacing. Below we can see an excellent example of creating space, with Timo Werner initially positioning himself at the front post (start of arrow), and constantly making a fake movement to move to the front post area. This engages his marker, and so when he does make this run, his opponent falls for it. This creates a large spacing issue as seen below, and Orban is able to make a run from deep and score with a header from this region.

In this example, we see a basic movement in which Leipzig simply empty a space and then run back into it, again creating a spacing issue where they are able to win the header. They then flick the ball on to the back post to the runner who is on the far side of his marker. This near-post flick on is a common routine Leipzig like to use. 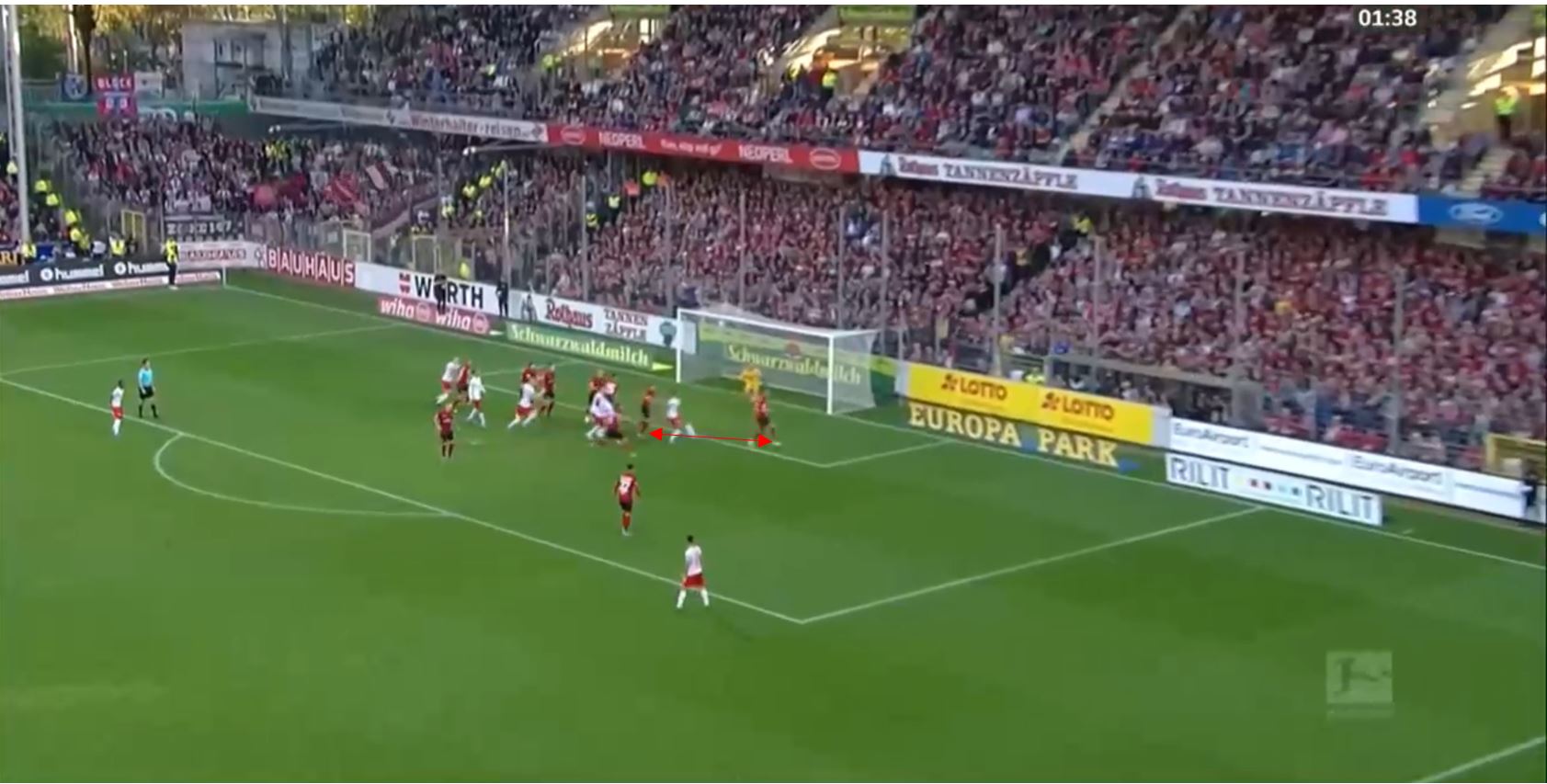 We can see an intelligent way of creating this routine below, in which Timo Werner runs from the blindside of the near post zonal marker. This makes the timing of this near post marker’s run difficult, as obviously he cannot see Werner. Werner also has dynamic superiority as he is able to pick up speed in the run-up to the zone. Werner wins the header and looks to flick the ball on, where he actually hits the bar from his header. This blindside tactic is something I discussed lots in my set-piece analysis of Manchester City.

RB Leipzig use a structure from corners which many top teams use, and it certainly seems to be one of the most effective structures. Leipzig use a mix of zonal and man-marking, with the man markers responsible mainly for slowing down the runs of opposition players. The structure has five zonal markers, who position themselves on the edge or just outside of the six-yard box, as we can see below. Zonal marking is all about coverage, and so these zonal players look to cover every area around the six-yard box, where a high-quality chance may take place.

We can see the structure outlined below, with the roles clearly designated. Two players cover the near post region, with one player slightly higher than the other, in order to cover a delivery in front. The nearest player’s role is to prevent a flick on and to protect the near post touchline area, so the ball doesn’t go all the way through. Two players then cover the central area, again we see good staggering with the players at different heights, which helps to maximise coverage of each area. If the ball goes behind this highest player, you would expect the goalkeeper to claim it. Likewise, if the ball goes ahead of the deeper of the two central players, you would expect the near post markers close to him to cover it. There is then a back post zonal marker who covers the whole back post region. It is vital the spacing between each player remains optimal and that each zone remains covered, otherwise opposition players can occupy and win headers in these zones.

We can see the same structure again here, with the spacing and roles of each player identical. Even with a short option, Leipzig don’t compromise their structure, still keeping in that 5-3-2 formation, with two other players usually on the edge of the box. Instead with the short option, Leipzig usually commits one player out wide, and the other will tuck into the box and act as an outlet should they win the ball.

Wolfsburg here place two takers on the corner in order to confuse Leipzig on whether it is an inswinging or outswinging corner, which affects the height of the zonal structure. Naturally, if the ball is going to be swinging inwards towards the goal, you drop deeper to protect the space around the goal, and if it swinging away, you move higher to meet it. If you don’t know which delivery it is, you would usually prioritise protecting the goal. This may, however, create space in deeper areas, but Leipzig’s coverage is good. 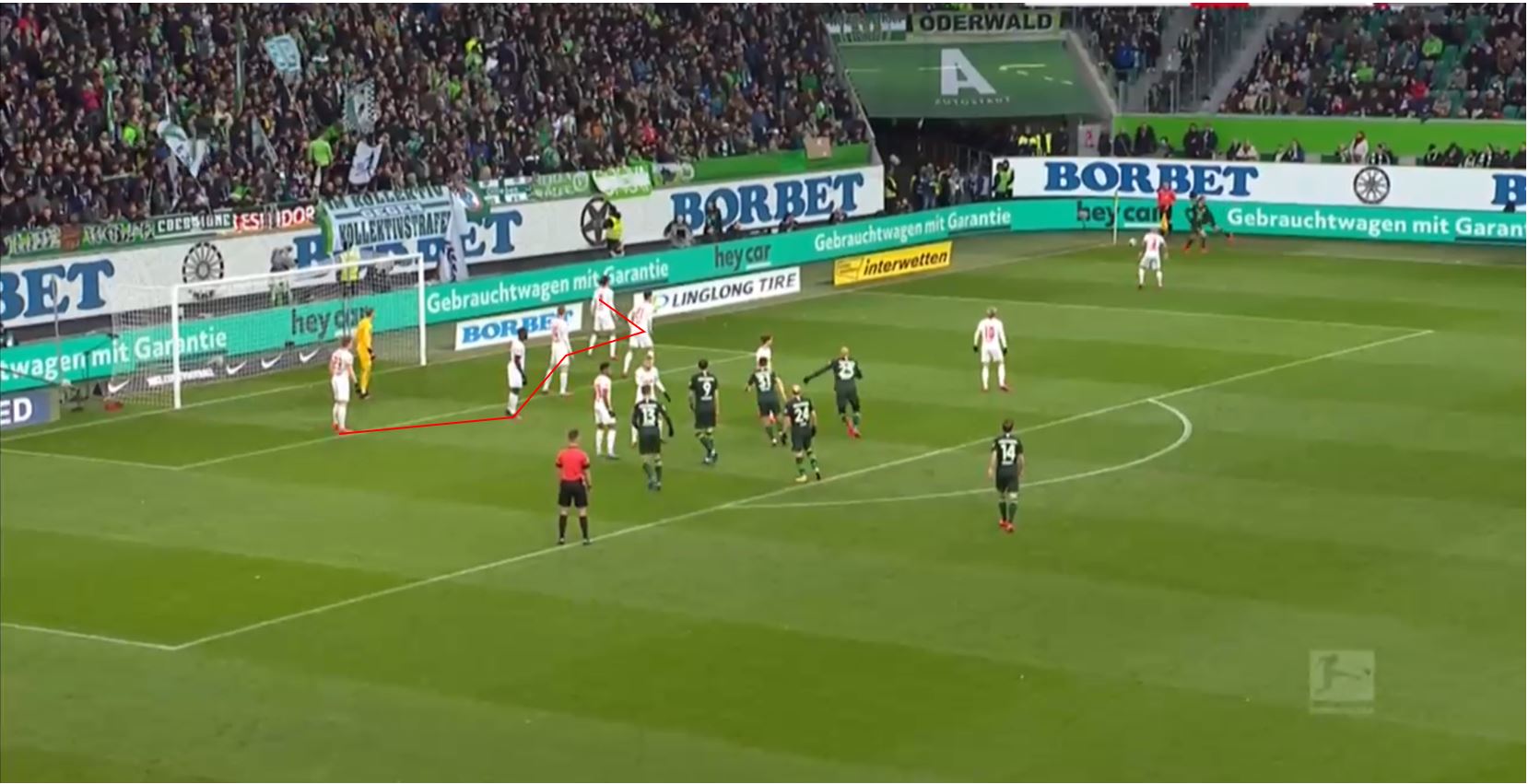 This annotation over the structure shows roughly each player’s individual coverage. We can see that in theory, no header should be able to be won within about eight yards of the goal. The spaces left in the six-yard box are either incredibly difficult to deliver the ball into, or are within the goalkeeper’s coverage zone. Having a lower-higher-lower-higher-lower staggered structure increases the height at which they can defend, without compromising their depth, as the players either side in the chain can always cover the space in behind. This is of course in theory with near-perfect spacing every time, but Leipzig usually do have this. The man markers in front also allow for deeper spaces to be covered. If the threat of deeper players is immediately obvious, the zonal structure can, of course, move up further than is shown.

We can see a prime example from earlier in the season of what happens when you don’t space correctly, with the space between the second and third markers becoming too large, and a player can simply run in unmarked and score a free header. It’s worth noting though that they have conceded only three goals from corners this season, with the majority coming earlier in the season. 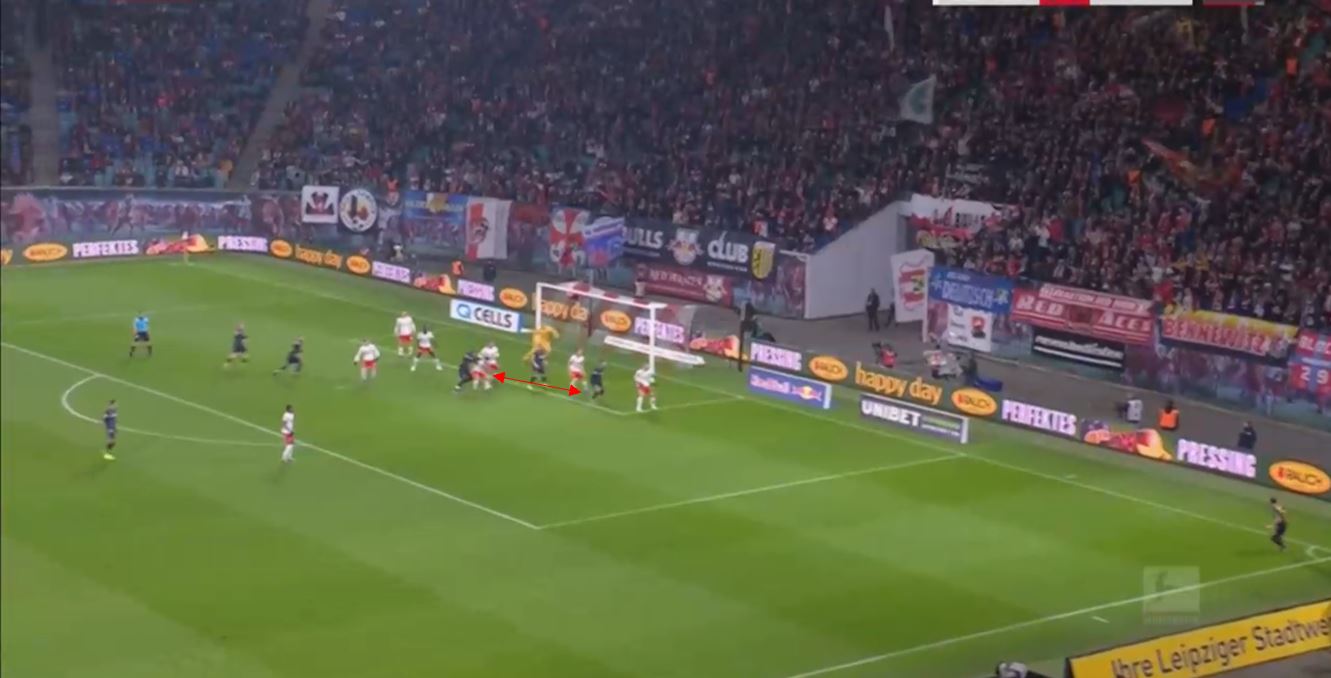 This tactical analysis has focused solely on the corners of RB Leipzig, as the main data of the piece only covers this area. RB Leipzig’s throws are also exceptional and are something I have written about extensively on Spielverlagerung, with their use of traps and the spare player concept particularly effective. Their free kicks are also something which I will include on an upcoming piece I have planned here. Nevertheless, it is clear to see from this analysis that RB Leipzig are an effective team from corners, and this is certainly something Nagelsmann has worked in during his time at the club so far. It will be interesting to see how big a role set-pieces play for Leipzig when the Bundesliga returns imminently.