Yusuf Yazıcı is a young Turkish player who played his whole life at Trabzonspor before moving to Lille in 2019. Last season, he scored only once and made four assists as Lille reached fourth place. He planned to do better this season and is off to a flying start.

So far, he has scored 11 times this season and has done four assists, helping Lille get through to the next round of Europa League and doing well in the league. Right now they are in second place in Ligue 1, tied on points with Lyon who is first and one point above PSG.

Yazıcı is one of the many promising talents that Lille have signed over the years, seeking to develop them further. It seems that this season is being the breakout moment for him as he has consolidated himself in the starting team and is being very influential. In this tactical analysis, we will understand why he is having such a positive effect on the team.

Since Lille play in a 4-4-2, last year he was sometimes placed at right-midfielder and these tactics did not seem to fit him well. After thorough analysis, Christophe Galtier must have realised that his best position is that of an attacking midfielder. In this scout report, we will see how Yazıcı has been greatly adapted to Lille’s formation.

When out of possession, Lille set themselves up in a 4-4-2 formation as it is a more solid formation when trying to press. This option gives you two forwards who are essential in being the first line of pressure as they can close down the middle and passing options to the midfielders.

Lille usually play in a medium or medium-high block. They don’t usually press the centre-backs intensely and rather let them play between each other as they pose no danger to Lille doing so. Lille focus more on closing the options through the middle, as the 4-4-2 is known to be a compact formation to allow the least amount of spaces.

For example, in the image below we see how the forward that was on the left is going to press the centre-back closest to him that has the ball. At the same time, Yazıcı comes inside to mark the midfielder that is offering himself. Once the centre-back passes it to the other centre-back, it will be Yazıcı who goes to mark him and the other forward will come inside. 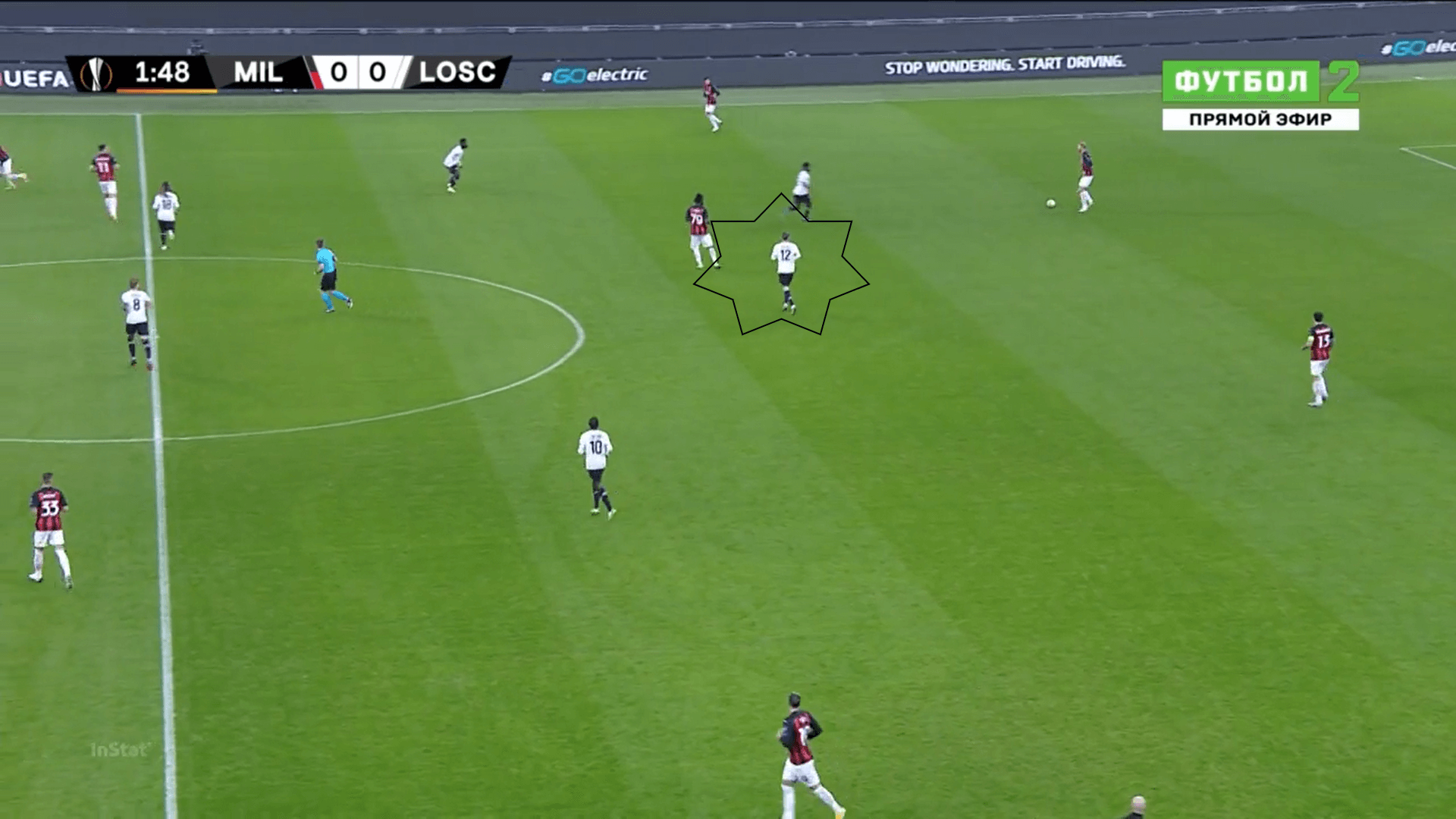 Sometimes, the forwards will go towards the centre-backs while protecting the middle and forcing them to the wing. Depending on the pressing movement of the forward, the Lille team will behave accordingly as they will prepare themselves for the full-back receiving the ball. By doing this movement, it increases the chances of the centre-backs just making a long-ball so as to avoid the risk of a pass which is great for Lille as they have powerful centre-backs.

For example, in the image below, Yazıcı sees that the centre-back is about to receive the ball and so will be on him once the centre-backs controls the ball. This will leave the centre-back no other choice but to control into the wing. All of Lille’s pressure is done to avoid passes through the middle. 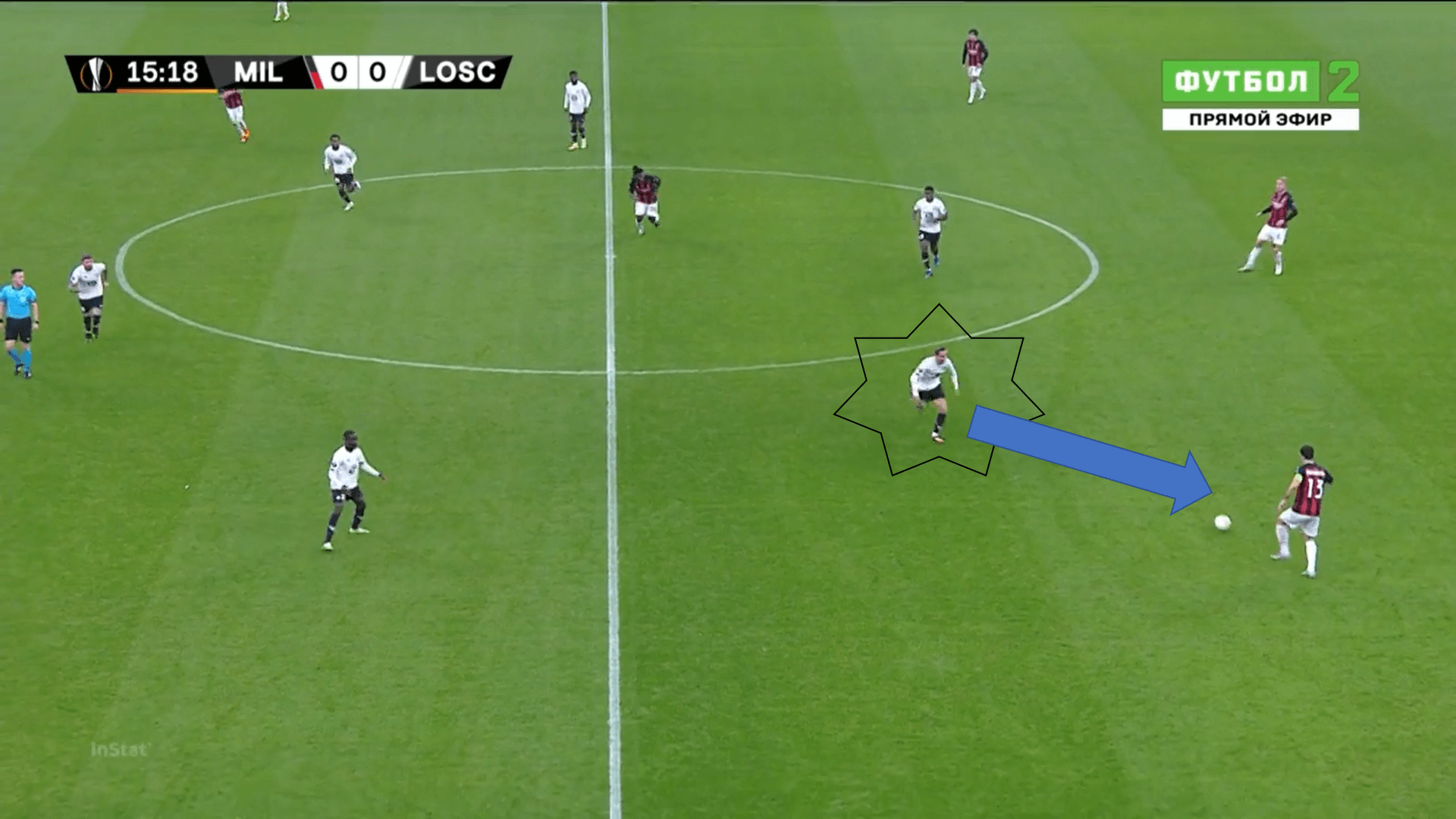 Once the forwards get a bit tired of constantly going to their respective centre-backs to press, they will sometimes stay protecting the middle to save energy. They will just let the centre-backs pass between each other and stay protecting the passing options to the midfielders inside. This is a great way to use their energy efficiently and to obtain their objective which is blocking the passes through the middle. The negative side of this is that centre-backs will have more time to make a decision.

This method can be seen below. 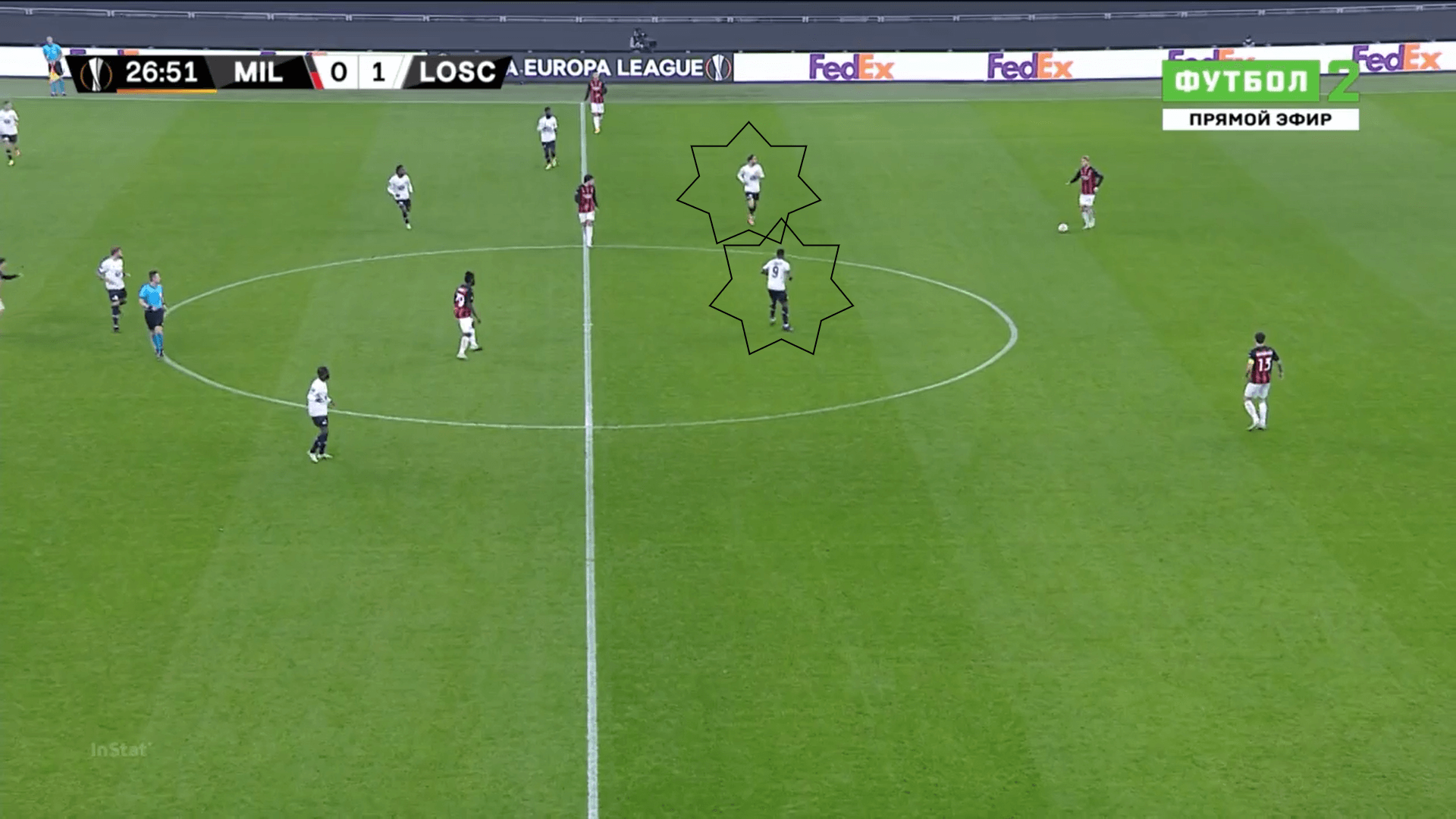 Overall, Yazıcı is essential to Lille’s pressure as he is part of the initial pressure which is crucial to a team because if you are solid in the first pressure, the opponents will have it a lot harder to play out. He also sometimes dictates how the team positions itself by deciding to go press the centre-back and how he presses the centre-back.

As an attacking midfielder

Once on the ball, Lille makes a 4-4-1-1 formation as Yazıcı is not a natural striker and prefers to play deeper to be more involved in the game due to his technical abilities. He is constantly moving around the attacking area to position himself to be a good passing option.

With him, Lille can play through the middle as he has the ability to receive and turn quickly to attack the goal. When trying to be involved in the game, he sometimes drops down to receive the ball near to the midfield line as seen below.

He does this when he feels he is not participating as much as he should be. The centre-backs obviously prefer to pass it to him because he is better on the ball than the centre-midfielders. By coming down from an advanced position, he also is unmarked as the opponents were not foreseeing him to come down for the ball and Lille would have a superiority. 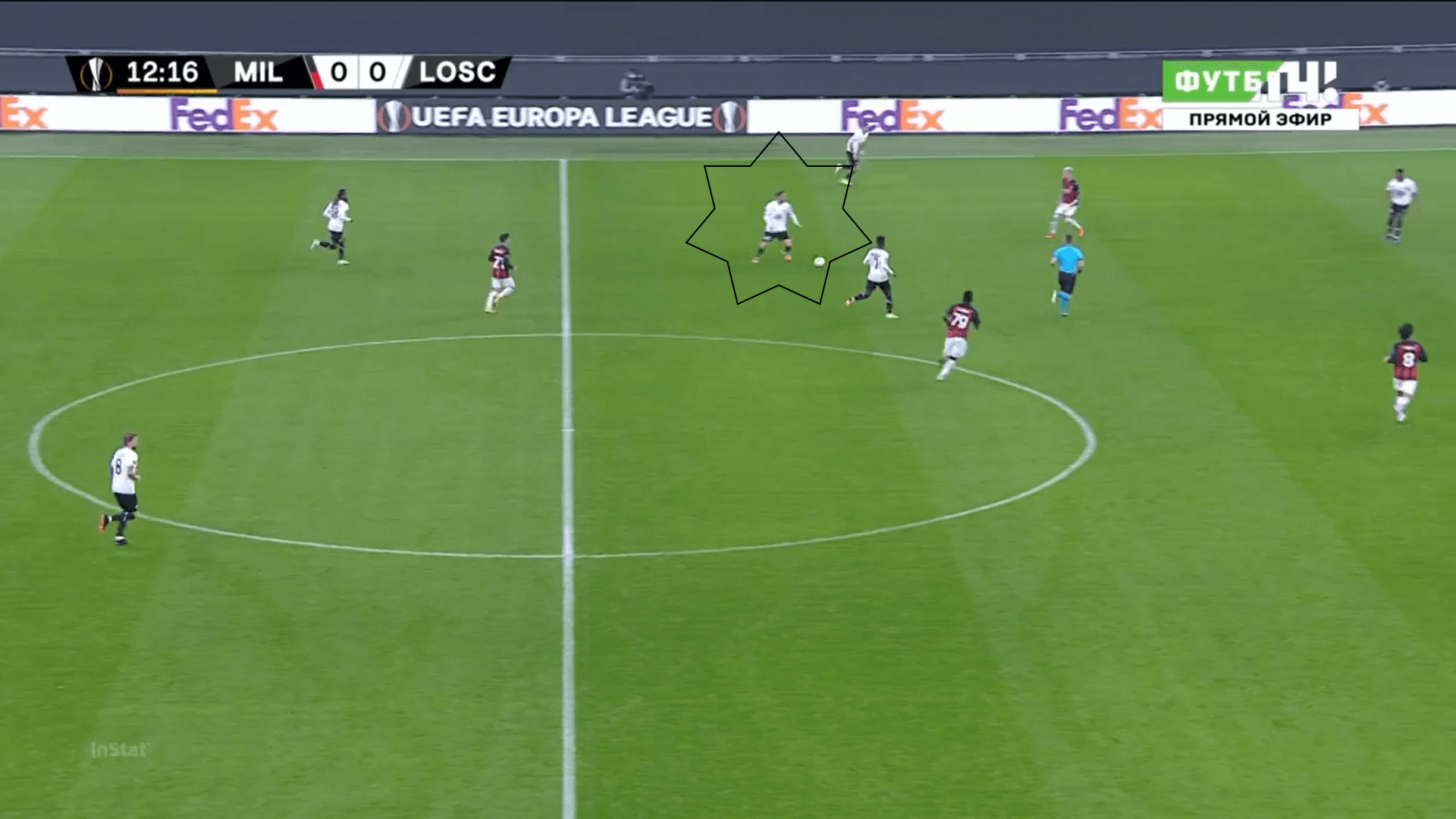 When Lille has the ball, he is constantly asking for the ball between the midfield line and the defensive line. This is because he is great at playing it quick through the middle to create space there as the middle is usually the most populated zone.

He can make one-twos and quick passes or dribbles to make space there. For example, in the game against Milan in the Europa League, he was made a pass through the middle. He was perfectly aware of his surroundings and the Milan player coming to mark him so he lets the ball go between his legs to his teammate behind him.

His teammate then completes the one-two to him and Yazıcı is in space to shoot. This is actually where their second goal comes from. 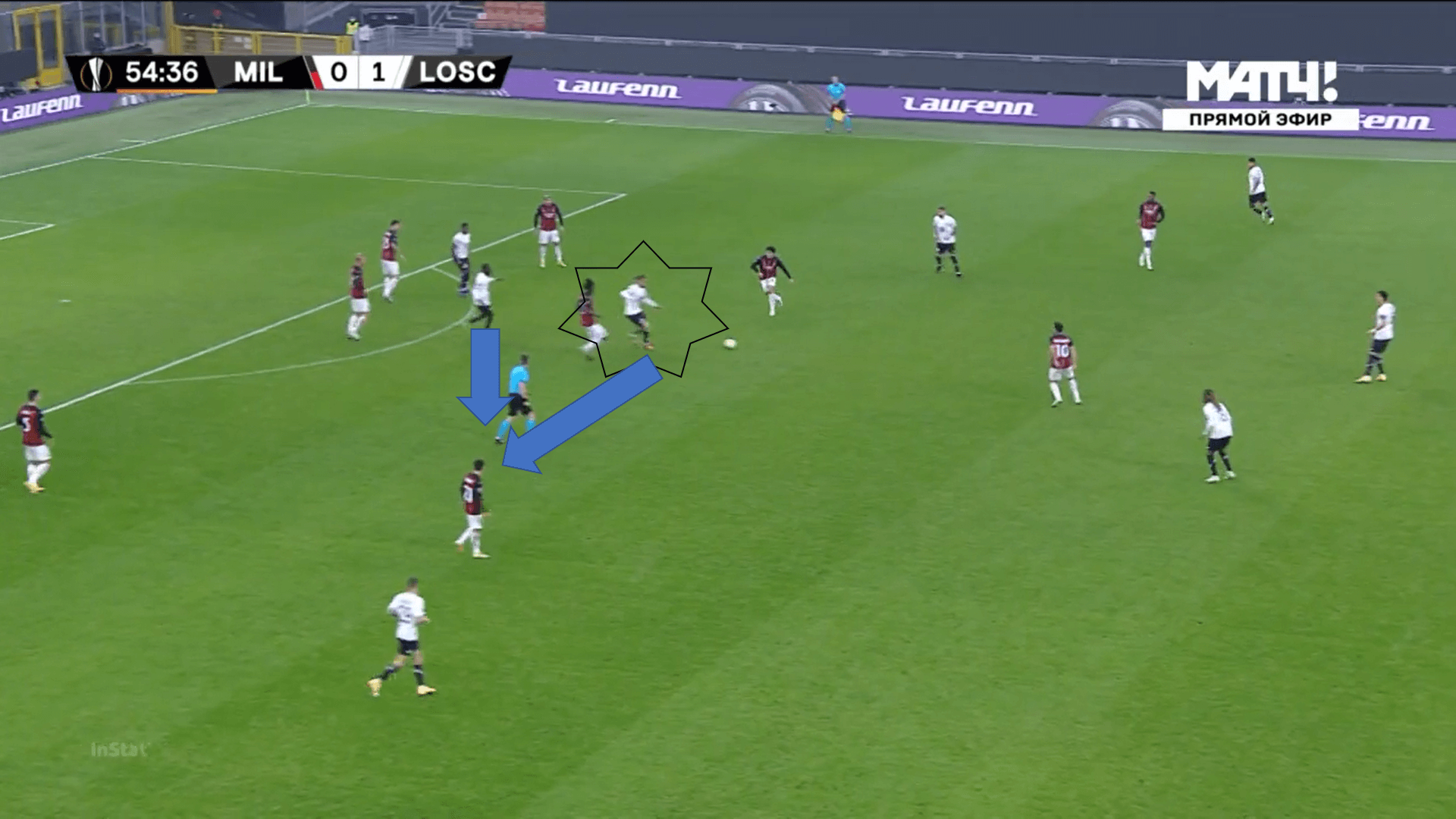 Going to the sides

Yazıcı is often seen going to the wings. This is done for two reasons. Lille’s team is well-coordinated which means that they can make many position rotations to surprise the opponents. Moreover, he goes to the wings to support the play there. Let’s expand on both.

During the build-up, to surprise the opponents, Yazıcı and the wingers sometimes change positions so that the winger is the one receiving through the middle and Yazıcı goes to the wing. By moving into the middle, the wingers are unexpected because previously the opponents were trying to mark Yazıcı.

In the example below, we see how Yazıcı has moved to the left and the left-winger is now free in between the midfield and defensive lines. 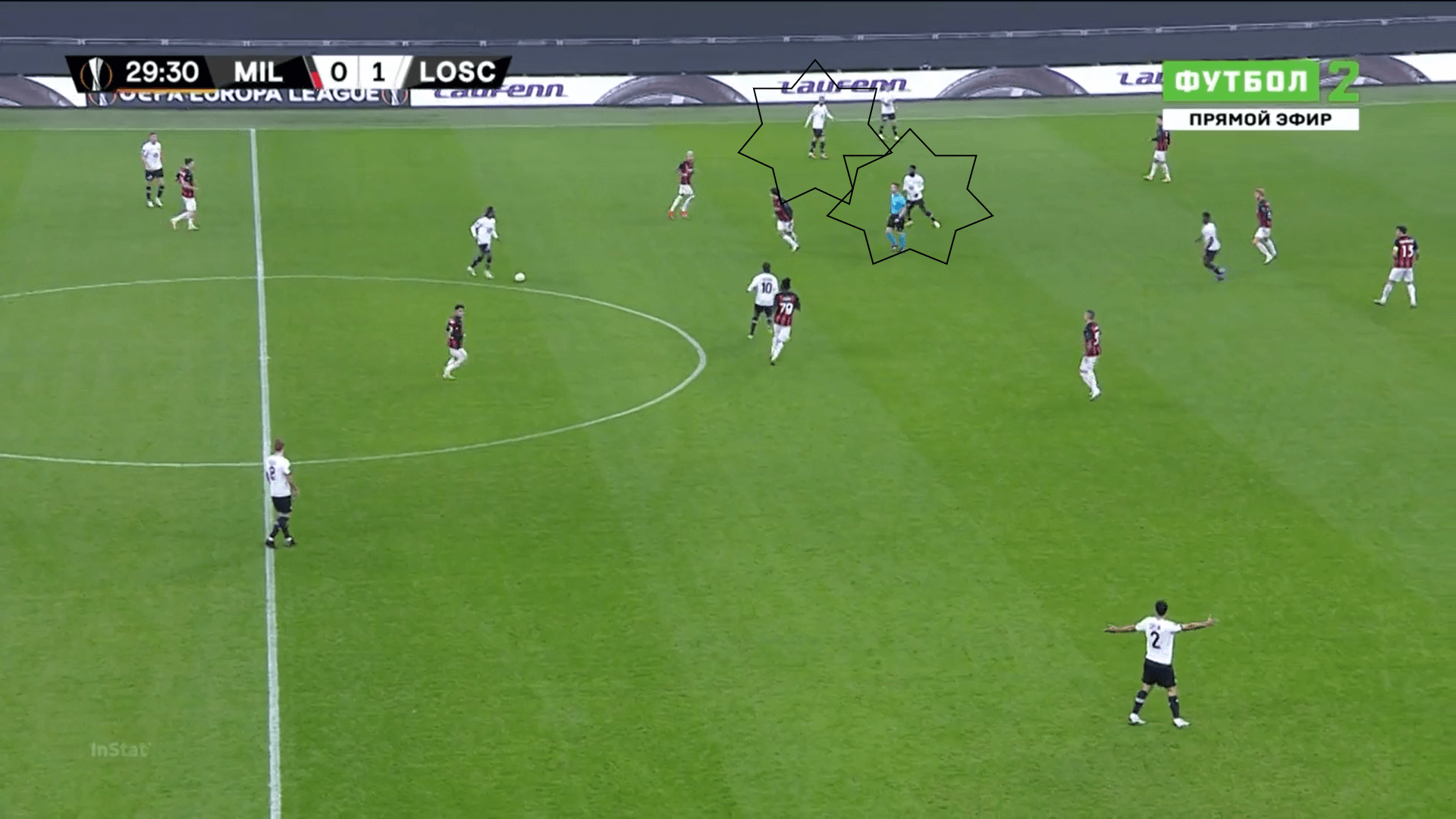 The other reason that Yazıcı goes to the wings is to help the play as he is trying to generate superiority by being there. Furthermore, he is able to create triangles which are essential to be able to develop a play as it offers two options to the man with the ball.

This is seen below, how the appearance of Yazıcı has improved the quality of the situation on that side. If he had not been there, it would have been just the full-back with the left-winger and that is tougher to get out of. 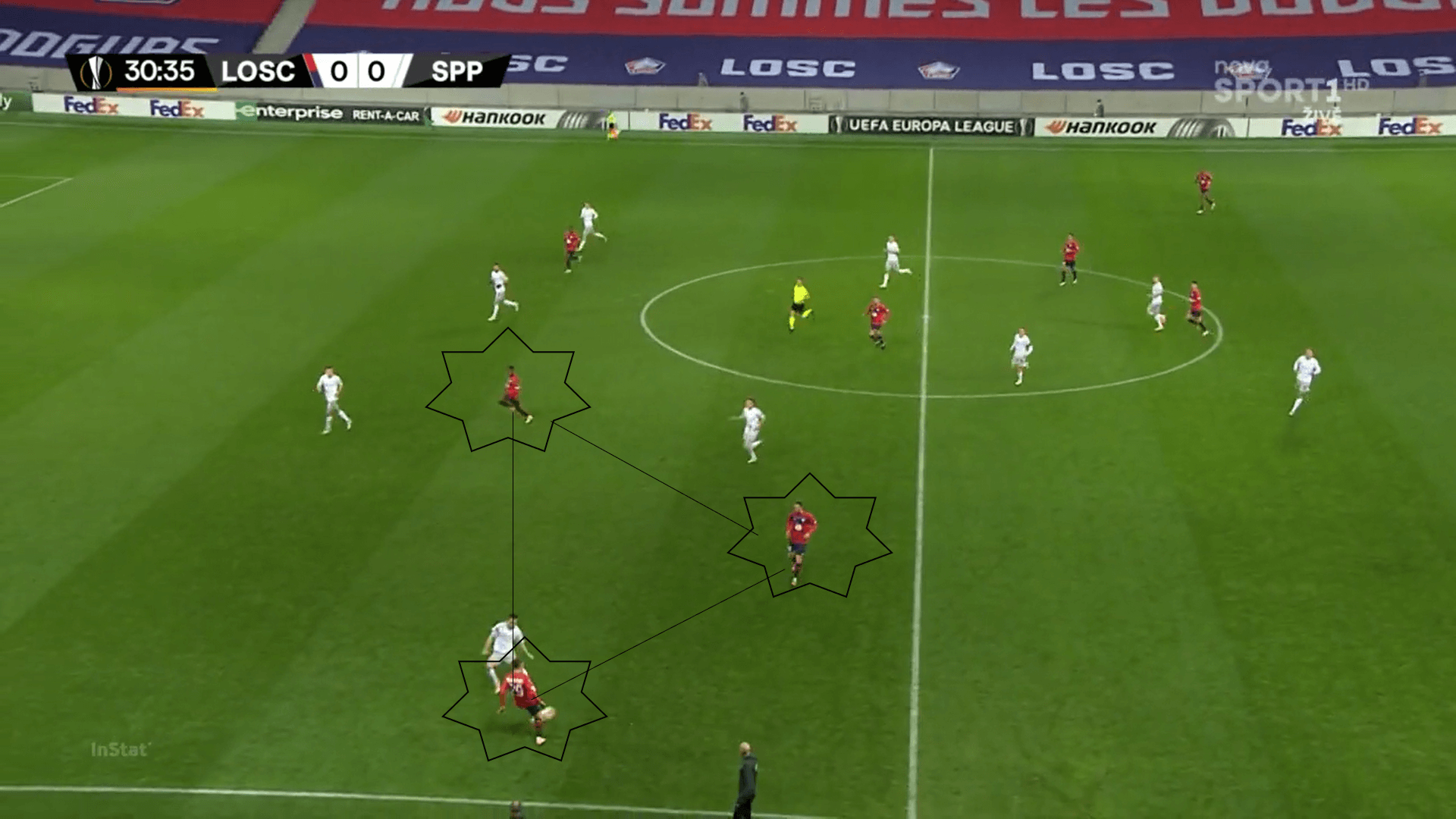 Once Lille recovers the ball, they do not hesitate in sprinting in numbers for the counter-attack. Yazıcı is not different as he is usually present in all these attacks. He is quick when making these transitions and sometimes finds himself with attacking opportunities due to these.

Below we see the example against Milan, where there are four Lille players ahead of the Milan players for the counter-attack and Yazıcı is one of them. In this counter-attack is actually where Yazıcı completes his hat-trick. 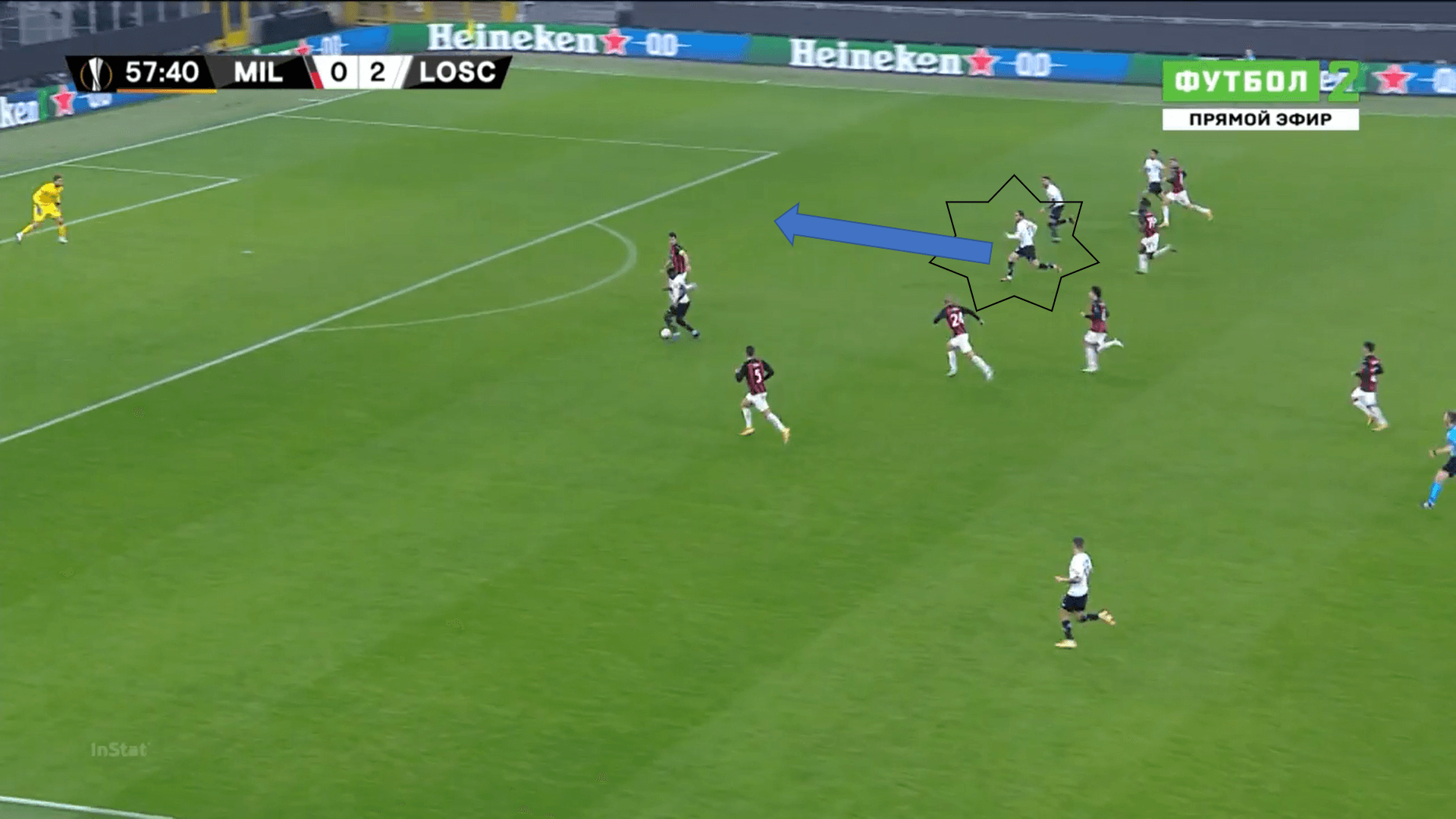 As well as finishing these attacks, he often starts them as his team look for him once they recover the ball. They look for him because Yazıcı is technically gifted and can progress the ball well and quickly to make an efficient counter-attack.

Overall, Yazıcı is being instrumental in Lille’s success this season so far. He has improved significantly as he has settled himself in the attacking midfielder role where he is free to go where he wants. He can play through the middle well and also helps the team when going out wide. Due to his technical abilities and Lille’s selling culture, it would not be surprising to see Yazıcı in a UEFA Champions League club soon…