Chennaiyin FC is lingering at the 7th position with ten points from eight games. However, the numbers suggest the Marina Machans should have earned more points. Chennaiyin FC have recorded the most xG per match with 2.01 xG, among the Indian Super League teams, however, they have scored only 0.88 goals per match. Along with underperforming in front of the opposition goal, the Marina Machans are also struggling to defend set-pieces, especially corners. Chennaiyin FC have conceded only seven goals and five of them are from set-pieces, three being from corners.

In this tactical analysis, we will analyse the struggles of Chennaiyin FC in defending corners.

Let’s look at the basic structure and the tactics in which Chennaiyin defends their corners. Csaba László varies his structure depending upon the opposition and their offensive structure. The Hungarian coach mostly opts for either a complete zonal structure or a semi zonal structure with most of the players in a zonal setup. However, whoever is the opponent, the first line (deepest) always consists of five players in a zonal structure. The players keep on changing in the first line except for the defensive pair, Enes Sipović and, Eli Sabiá who protects the most dangerous regions of the six-yard box. 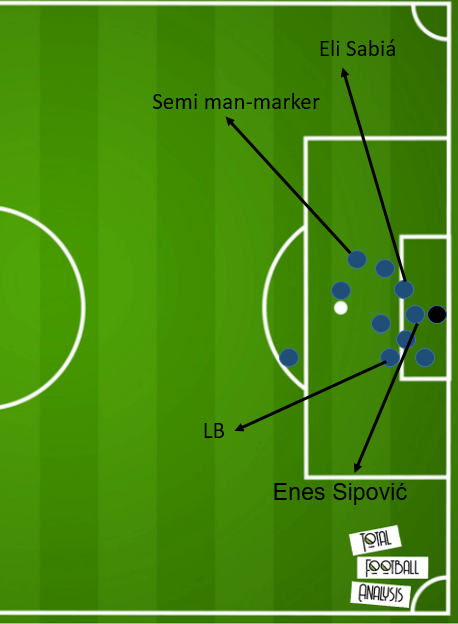 Against East Bengal, Csaba László went with a complete zonal structure with three lines of 5-2-2 and another player was Lallianzuala Chhnagte who positioned himself at the edge of the 18-yard box to provide an outlet for Chennaiyin counter attacks. I have annotated one player as semi man-marker as he was mostly in a zonal structure covering a lot of area which we do not see in a zonal marker as well as he did not entirely man-mark his opposition. 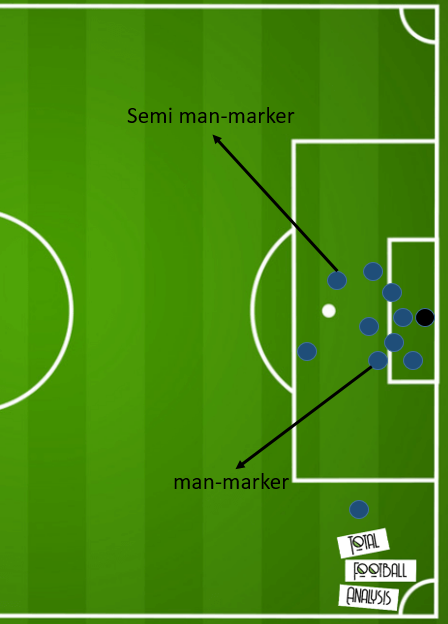 Against FC Goa, Lallianzuala Chhangte positioned near the corner flag as the Gaurs had a player for short corners. Jerry Lalrinzuala (LB) was used as a man marker thus vacating his position in the zonal structure. The furthest zonal player was also pushed a bit higher. 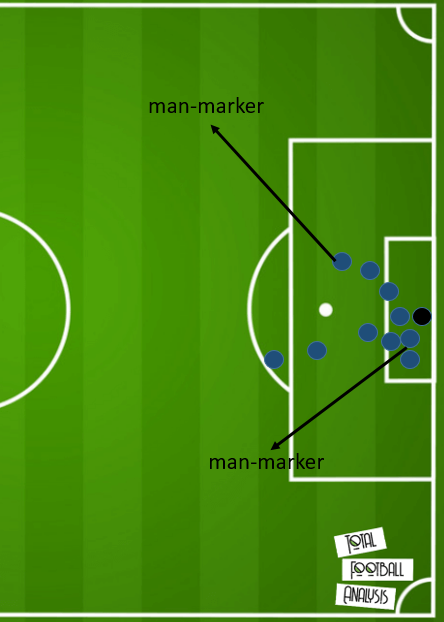 All in all, you can see, Csaba László majorly opted for the zonal structure. However, Chennaiyin faced a lot of difficulties in defending the corners, especially the inswinging corners. The Marina Machans struggled with:

Along with these, Chennaiyin also had to deal with individual errors. Against Bengaluru FC, the Hungarian gaffer opted for a different structure almost vacating the region between the six-yard box and the 18-yard-box. Bengaluru could have easily scored two from corners, if not for poor finishing and execution. I won’t be discussing those corners, as it was just a one-off game. However, I will be discussing the points I have iterated above.

To give context to how Chennaiyin face a conundrum in defending inswinging corners, let’s look at their structure when the opposition delivers outswinging corners.

As you can see in the image below, Chennaiyin set up in a 5-2-2, and Chhangte is the outlet. The first line (deepest) consists of the five taller players, Sabiá and Sipović who are aerially dominant, protect the most dangerous regions in the six-yard-box. Jerry and Rafael Crivellaro forms the second zonal line. Anirudh Thapa and Rahim Ali (semi man-marker) form the last line almost at the edge of the 18-yard-box. Rahim Ali covers the entire zone vertically from his initial position to Memo’s (far-post player) position, thus I have termed his role as a semi man-marker as he does not man-mark Anthony Pilkington entirely. 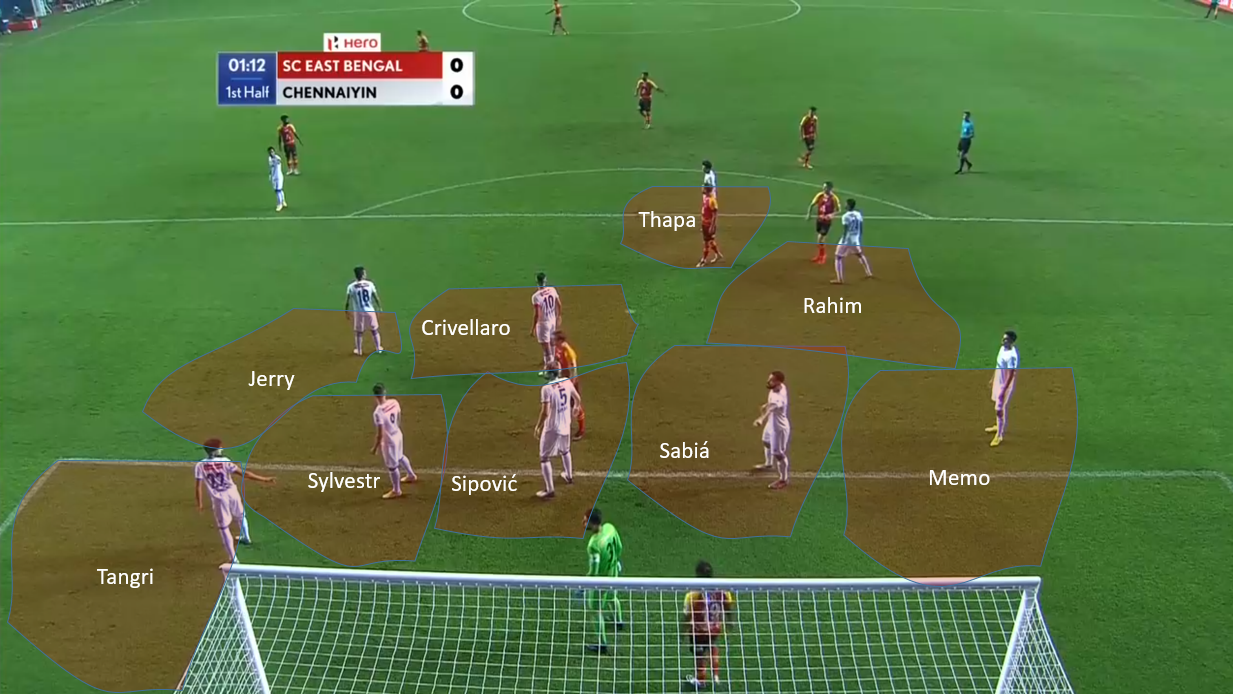 The near-side six-yard box is occupied by Tangri whose main responsibility is to protect any short or low crosses into the zone. He also steps out a yard or two to protect the edge of the six-yard-box to prevent flick-ons. In the case of short corners, he initially positions in his respective zone but moves out to help Chhangte once the short corner is played. He is the deepest of all.

Though I am not fond of this structure, it almost occupies all the zones in case of an outswinging corner.

The problem lies in the case of inswinging corners, since the setup is so poorly staggered. In the first zonal line, Tangri is deep and the others continue to go into more height. So once the ball is supposed to deliver into the six-yard-box, the deepest line (first) drops deeper which exposes space between the first and the second line. 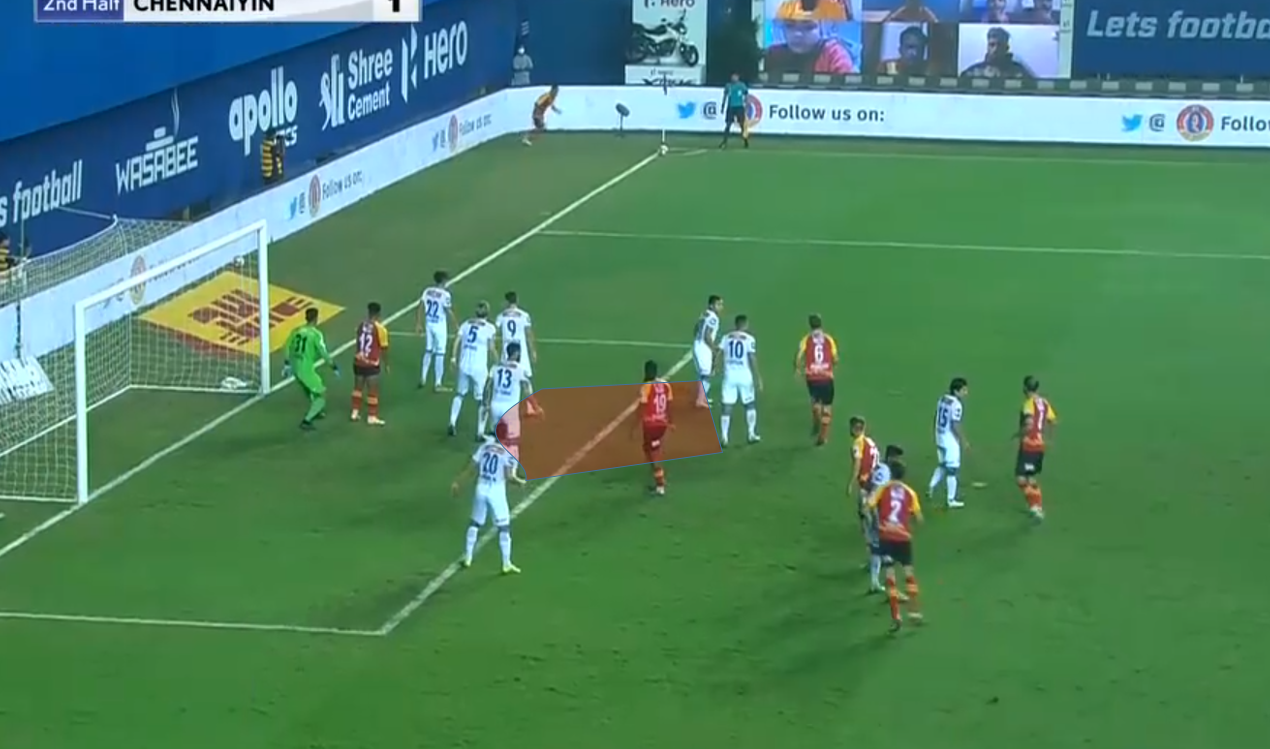 When the deepest line drops deeper, the second line should also drop a bit deeper to protect the dangerous eight to ten yard space in front of the goal but they do not.

The other major problem lies in staggering. The first line is almost a straight line when the ball is just delivered, with the initial low-high-straight/high-high-high staggering. You can see the space it exposes. 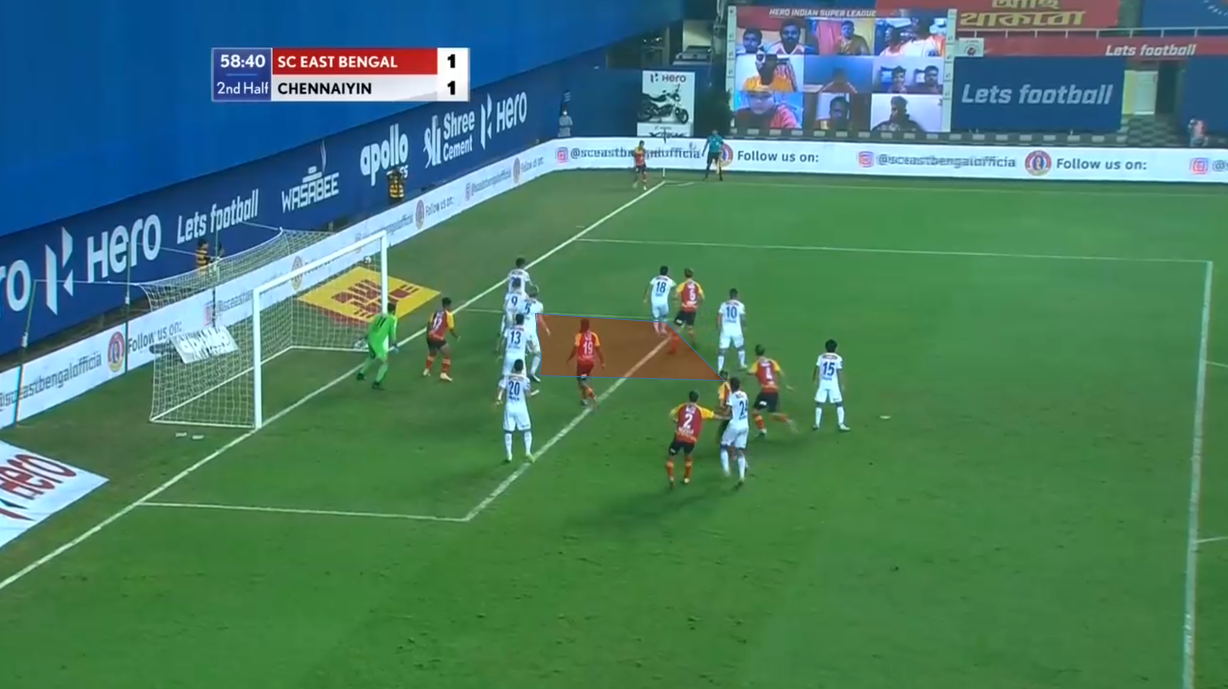 Jerry moves to his left to protect the near side edge of the six-yard-box as Tangri in no way is able to protect that region now and Crivellaro maintains his zone without shifting according to his teammates. In zonal marking, you must hold your position, but you must be ready to make slight adjustments according to the delivery, i.e. in this case drop half a yard deeper and towards your left, it minimises the enormous space it exposes in a very dangerous region.

Now coming to the poor staggering, if Sylvestr was higher and Chennaiyin maintained a low-high-low-high-low staggering, Sylvestr could have at least put pressure on the East Bengal player (Matti Steinmann) who have scored the goal without any pressure.

Consider, the second player in the first line in the near post to be Sylvestr and this is Chennaiyin’s staggering, Sylvestr definitely goes for an aerial duel with Steinmann.

In my view, here Sylvestr goes too deep because of Jeje Lalpekhlua’s presence and also to prevent any inward ball to go directly into the net. However, if Sipović was deeper, Sylvestr wouldn’t have to carry the entire responsibility of negating Jeje’s presence.

I am not fond of the structure because of Thapa and Rahim Ali’s positions. The first two lines make sense (the staggering may be poor). The two lines protect the most dangerous regions, as well as the second line, slows down any incoming attacker to the six-yard  box. However, Thapa (or Thapa’s position) is too far from the rest, which leaves Rahim Ali (or Rahim Ali’s position) to deal with many players. 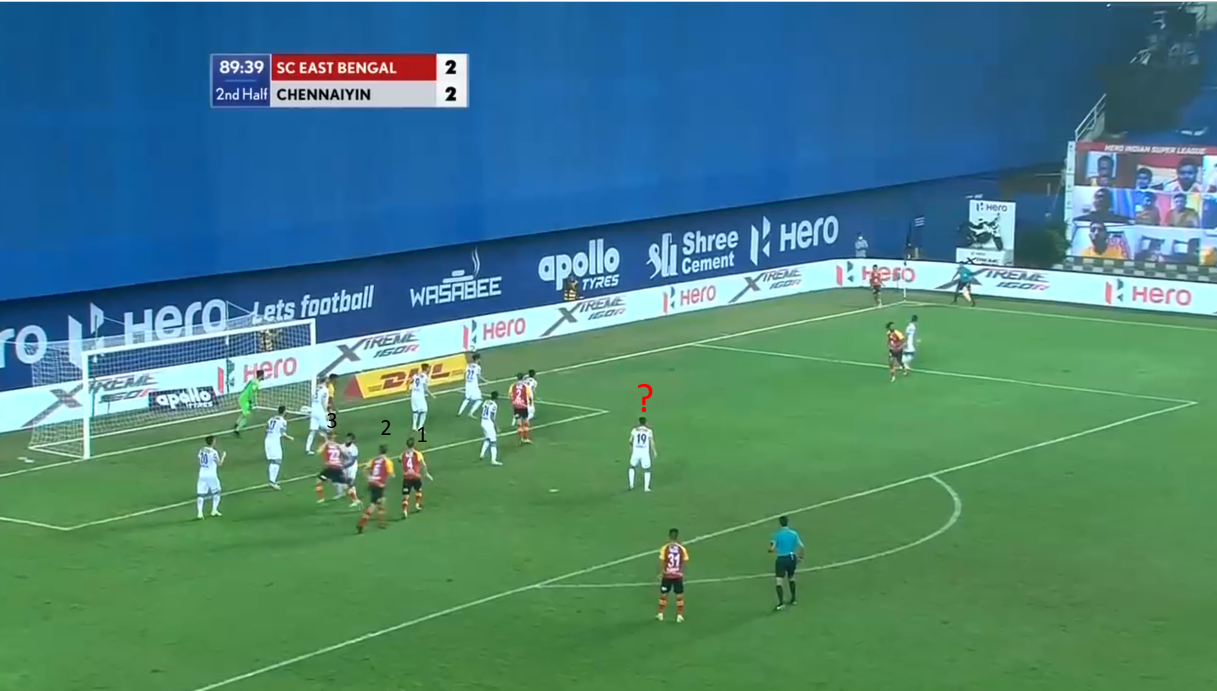 Here, Thapa and Rahim Ali’s initial position is covered by Fatkhullo Fatkhuloev and  Germanpreet Singh respectively. You can see, Singh has to deal with three players in the far post. Any ball above Rahim Ali (covering Crivellaro’s initial position) is in for a disaster, with Sipović too deep. Thus, Thapa should be deeper than his initial position. This is how East Bengal scored their second goal on the night. 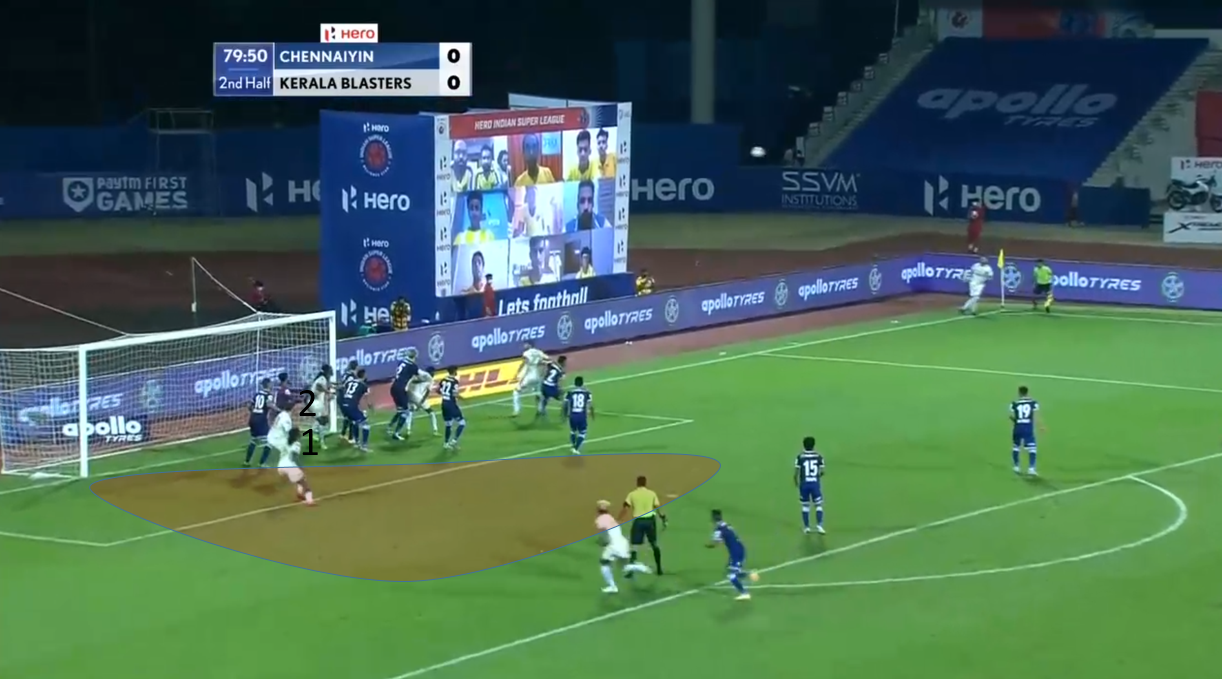 The positioning of Thapa and Sylvestr (Rahim Ali’s initial position) is disastrous. It completely vacates the space between the six-yard-box and the 18-yard-box. Also in the far post, you can see, the two most dangerous headers of the ball are unmarked as well as Rahul KP has deceived Chhangte. Kerala couldn’t score from this situation but have shown the path for other clubs to exploit.

In my view, Chennaiyin gaffer should go for more of a semi zonal structure with Thapa and Rahim Ali acting as a man-marker, sometimes even Jerry can act as the man-marker depending upon the opposition and should also tinker with his staggering in the first line.

Initial spacing is good for Chennaiyin in the first line of zonal marking, however, when the ball is delivered into the box, the spacing goes out in the toss, especially, in between the 4th and 5th markers. Sabiá has the knack of moving up or shifting towards the 3rd player even if he is not required to do so and there lies the problem. 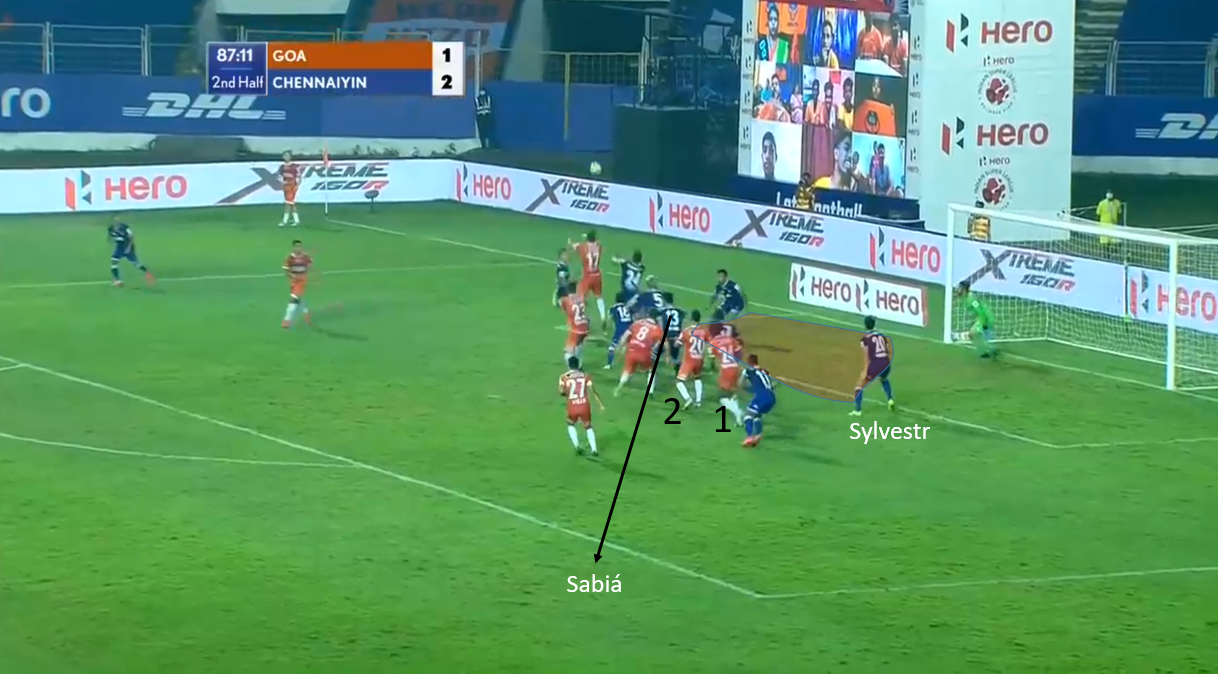 You can see, Rahim Ali (#24) jumping, and he had won the ball in this instance. Even he hadn’t won Sipović should have won the ball. Sabiá shouldn’t have moved so higher as it exposes the space behind. Any flick on by a Goa player, and two players (#24 and #20) could easily exploit the unmarked space in between the 4th and 5th marker (Sabiá and Memo).

Again, you see a similar pattern in the game against NorthEast. 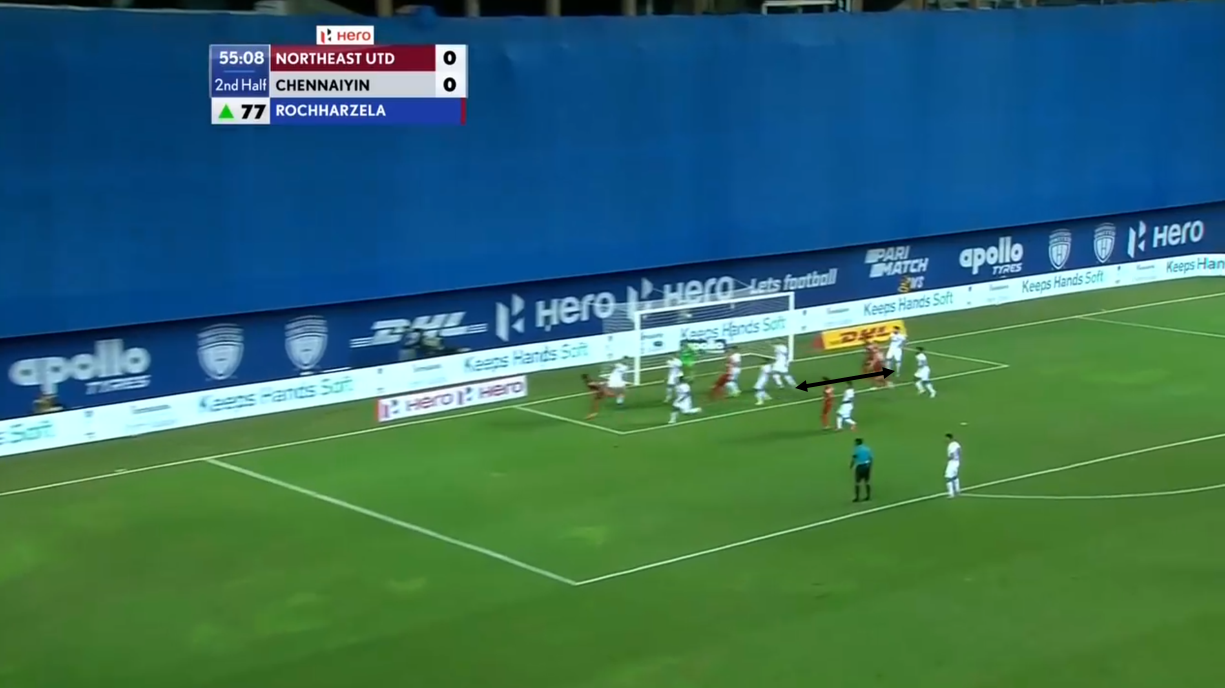 Here, again, you see the space left between the 4th and 5th marker. Here, Sabiá does the right thing in moving relative to his line but Tangri (5th marker) holds his position, and two NorthEast players are seen to be entering the space. Any flick on by the near post NorthEast player to the far post would have surely resulted in a Highlanders goal.

Again, an instance in the Kerala Blasters match, where Kerala Blasters should have scored. Here, you can see again Sabiá getting too close to the 3rd marker (Sipović) leaving a huge space between him and Crivellaro (5th marker). 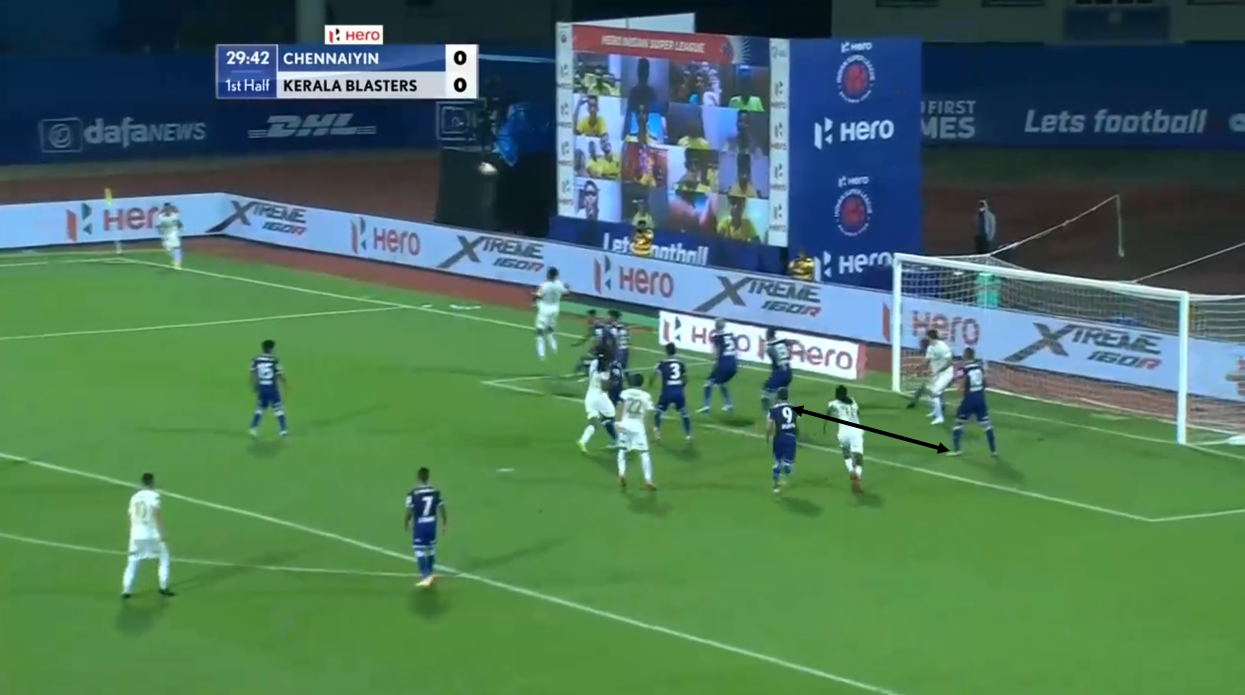 The ball was directly played in the space between the 4th and the 5th marker. Sabiá (4th marker) completely missed his header and Kaith couldn’t come out to help as Gary Hooper blocked him. You can also argue, Sylvestr should have slowed down Costa but again Chennaiyin were underloaded in the far post and the Slovakian striker was in a conundrum who to mark but the major conundrum was the spacing between the markers.

Sabiá should analyse his mistakes in these situations and the centre-back shouldn’t move out of his zone hastily or get too close to the 3rd marker. It exposes an enormous space in the most dangerous region.

There are many other areas where Chennaiyin struggle in defending corners. Like, when the opposition plays short, the near post defending player moves to the corner flag leaving his zone which can be exploited by a good offensive set-piece team. Along with that, there are individual errors in most of the defending corners.

However, the first focus of Csaba László should definitely be getting his staggering right or the Marina Machans are in for more trouble.