Already one of the rising stars of Turkish football, Trabzonspor’s Yusuf Yazici could be set to make a name for himself beyond Turkey’s shores if rumour is to be believed. The 22-year-old attacking midfielder has been strongly linked with a big-money move to France with Lille OSC.

In this scout report, we will be focusing on what aspects of the Trabzon-born player’s game have led him to become so highly regarded both at home and abroad.

Having been granted his first-team debut at the tender age of 18 in 2015, Yazici has never looked back. By the 2017/18 season, he was a first-team regular and went on to score 10 league goals in the campaign that marked his call-up to the Turkish national team.

In this tactical analysis, we will look at some of the player’s qualities that have come to the fore in the 2018/19 season, in which he only enhanced his reputation with a string of strong performances in the Turkish Super Lig. 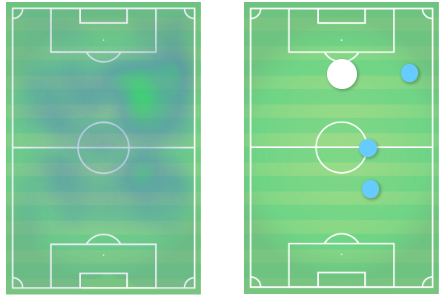 In the 2018/19 season, Trabzonspor usually lined up in a 4-2-3-1 formation in which Yazici would feature in the so-called ‘number 10’ role behind veteran forward Hugo Rodallega. As can be seen from his heat map, Yazici has a tendency to drift out to the right-hand side of the pitch, occasionally making runs down the right-hand channel, a position he is also comfortable playing in.

It must also be mentioned however that Yazici is a versatile player who can play in a number of positions depending on the tactics of each game. He was sometimes used in a deeper role in central midfield last season. However, this is not a position he appears to be particularly comfortable in, and considering his tendency to give the ball away, he averaged 2.4 bad touches per game in 2018/19, he is probably not best suited to this role in the long term.

When his team is in possession, Yazici can often appear somewhat languid in the way he strolls around the pitch at what seems like a walking pace. This only serves to lull opposition defenders into a false sense of security though, as it is when their attention is drawn to the ball that Yazici seizes his moments to make powerful sprinting runs into space.

Sometimes he makes these runs into gaps that have opened up in the defence, and other times he simply beats his markers for pace, as they are caught flat-footed, unable to react to his sudden changes in animation and movement.

In the above image, Yusuf Yazici (highlighted) is moving at a walking pace. From his body language you would think that he didn’t even want the ball, and that is exactly what he wants the Besiktas defenders to think, especially with a gap having opened up between them.

As soon as Rodallega’s pass reaches Sosa, that is Yazici’s cue to start his run. In a sudden explosion of pace, the young Turkish international burst through the gap between the two Besiktas defenders, as Sosa played a perfectly weighted ball over the top into his path. Thanks to Besiktas’ left-back playing him onside, Yazici was able to beat the offside trap and fashion a chance on goal.

Whereas the previous image featured a move that involved a certain degree of deception, the move illustrated in this picture above is all about sheer pace and power. No sooner does Yazici play the ball to teammate Anthony Nwakaeme then he sets his sights on the penalty area and makes another darting run.

Nwakaeme then produces an impressive piece of skill, as he manages to hold the ball up (thus drawing defenders towards him) before completing the one-two with a pass from the heel of his right boot.

By the time the Besiktas defenders become aware of Yazici he is already on the receiving end of his teammate’s pass and entering the penalty area, where he launches a shot into the side netting.

It is in this type of move that we can appreciate how a relatively tall and well-built player (Yazici is 6ft) can offer different interpretations on the number 10 role, traditionally seen to be better suited to players of a shorter stature with strong dribbling skills. Yazici’s height and strength mean that he can cover a lot of ground with only a few strides and he has the upper body strength to outmuscle defenders as he makes runs through on goal beyond his strike partner.

Although Yazici is not the most energetic player off the ball, that does not mean he is switched off from what is happening in the game. Whilst he generally positions himself high up the field to offer an outlet in attack, he is quick to drop into deeper positions to link up with his teammates when he sees opportunities to make positive contributions to his side’s build-up play.

In this move, Yazici drops into space in order to open up a passing lane for the centre-back. His movement to get into this position is very subtle though. With the opposition defenders used to seeing Yazici meander around at a jogging pace, they fail to pick up on the fact that he has actually managed to position himself to receive a pass in a dangerous area. The subtlety lies in the fact that he did not wave his hands in the air or make any other signal to his teammates to attract their attention, he simply glides into position ready to receive the ball and suddenly burst into action.

Not only does Yazici get into good positions in deeper areas, but he also uses the ball very intelligently, which is why he is often deployed in a deeper role as part of a central double pivot. In this position, Yazici appreciates the need to open up space for his teammates in more advanced positions.

In this move Yazici (highlighted in claret) and his teammate Abdulkadir find themselves outnumbered in a three-versus-two scenario. At this point, Yazici could just play the simple short pass to Abdulkadir, but the youngster has another idea.

Yazici decides to hold the ball up and carry it towards his own goal. As he does this, he takes all three opposition markers with him as Abdulkadir fleets past him in the other direction.

With the defenders completely unaware of what has happened, as Yazici turns around again, the passing lane to Abdulkadir is completely open and, more importantly, he has space in front of him to run into.

Another key aspect of Yazici’s game is his hold-up play. As we have already seen, Trabzonspor’s number 97 (his shirt bears the year of his birth) likes to think to use the ball intelligently and won’t waste it unnecessarily. Taking advantage of his upper body strength and height, Yazici buys himself time on the ball, attracting opposition markers towards him as he waits for a teammate to become available for the pass.

In this image, we see Yazici (highlighted in claret) surrounded by four Galatasaray players forming a square. As he spots his teammate Olcay Sahan (in blue) to his left about to make a run through the middle of the square of Galatasaray defenders, Yazici realises that to play in Sahan at this stage would be too obvious: he needs to create a distraction.

This is why Yazici does a 180-degree turn with the ball, immediately forcing the two nearest defenders to turn their backs on Sahan. Yazici then holds the ball up waiting for Sahan to appear to his left.

Although the move didn’t eventually come off as Yazici was dispossessed, it is clear to see what the intent was. If he had managed to play in Sahan then Trabzonspor’s number 10 would have found himself completely unmarked in a very dangerous position.

As this analysis has shown, Yazici is a very intelligent player who consistently makes good choices on the ball to the benefit of the players around him. His frame and acceleration over short distances make him a real threat in the final third, where he can hold the ball up to bring others into play or make bursting runs into the box.

It is for these reasons that he is probably best deployed in an attacking position behind the striker where his teammates can benefit the most from his talents. Although he can make important contributions in deeper positions, he seems better suited to dropping deep only occasionally when the game dynamics dictate, rather than playing a central midfield role as a starting position.

In any case, he is certainly a talent to watch out for in 2019/20, regardless of what position he is playing and in what team. At just 22 years of age, there is plenty of scope for him to progress further in what will still only be his fourth full season of professional football.