19-year-old Ozan Kabak was for sure one of the most surprising newcomers in last year’s Bundesliga. The Turkish centre-back was transferred in the winter transfer period from Galatasaray to Stuttgart and quickly managed to become an important piece. However, as Stuttgart were not able to avoid relegation, Kabak activated an exit clause in his contract to pursue a move to Schalke, who reportedly paid 15 million euros for the youngster.

This tactical analysis will provide analysis in this scout report and explain, why Schalke paid so much money for Kabak. Furthermore, possibilities for improvement will be shown.

Talking about Kabak’s defensive skills, what stands out is his positioning. You would rarely see Kabak out of position. When defending long balls or crosses, he is able to anticipate the situation early on and take the necessary positioning. 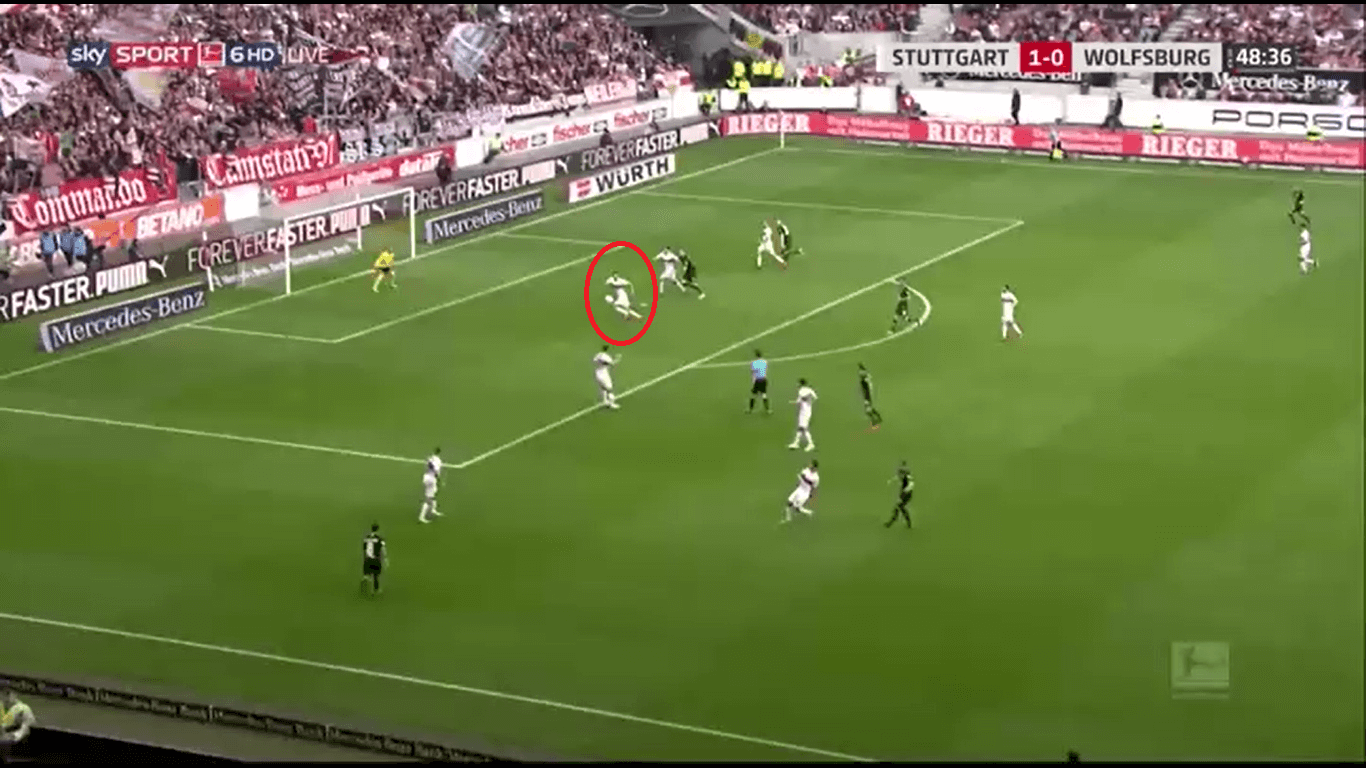 In this situation, he is able to defend a cross. Besides the mentioned overall good positioning, it is worth noting that Kabak’s body positioning is great as well. Standing sideways, he is going to receive the ball perfectly on his right foot in order to cleanly clear the ball. 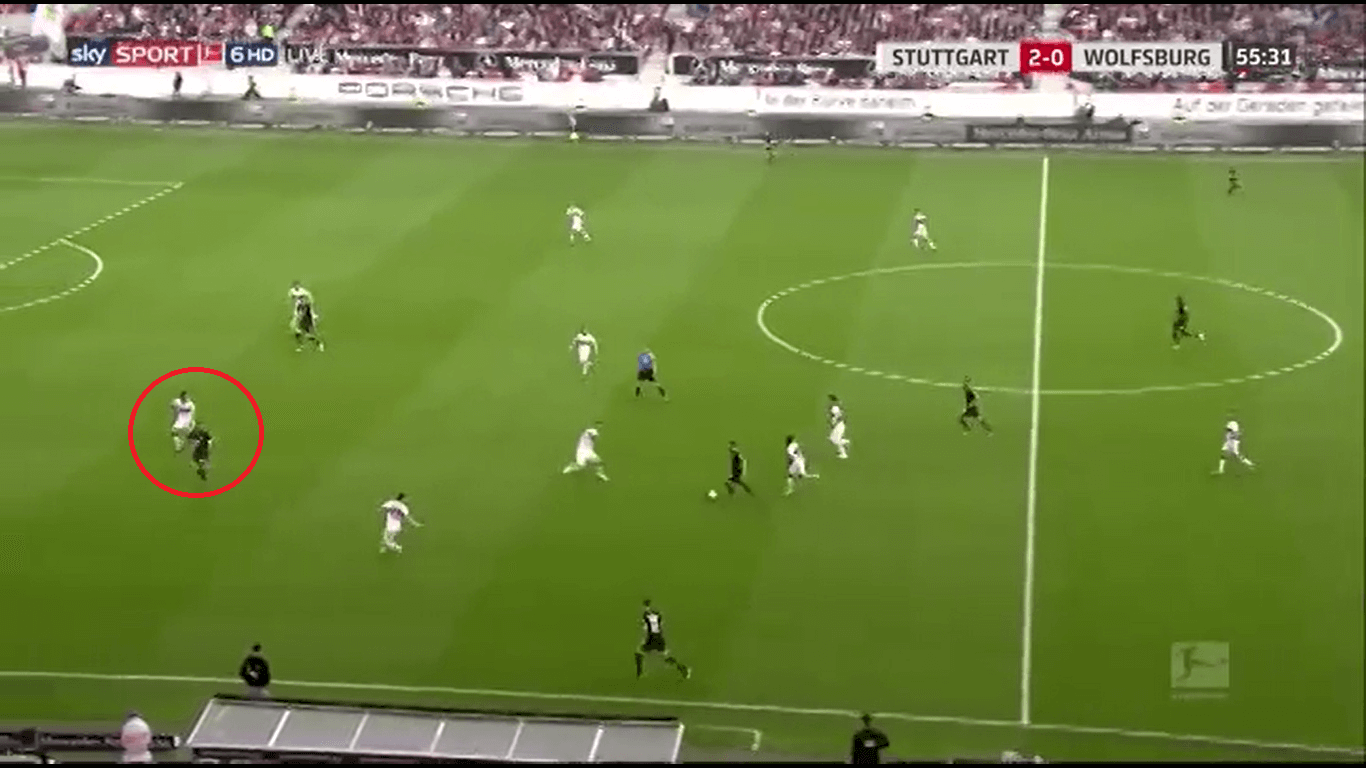 Here, we see that Kabak closes the inner line. This means that the opponent cannot break through centrally, but is rather forced to the wing far away from the target. In the follow-up, the ball is played into the open space at the wing. Kabak’s great physical ability allows him to move up there as well and follow the attacker. As we can see in the image below, he tackles the opponent on the wing and ends the attack. 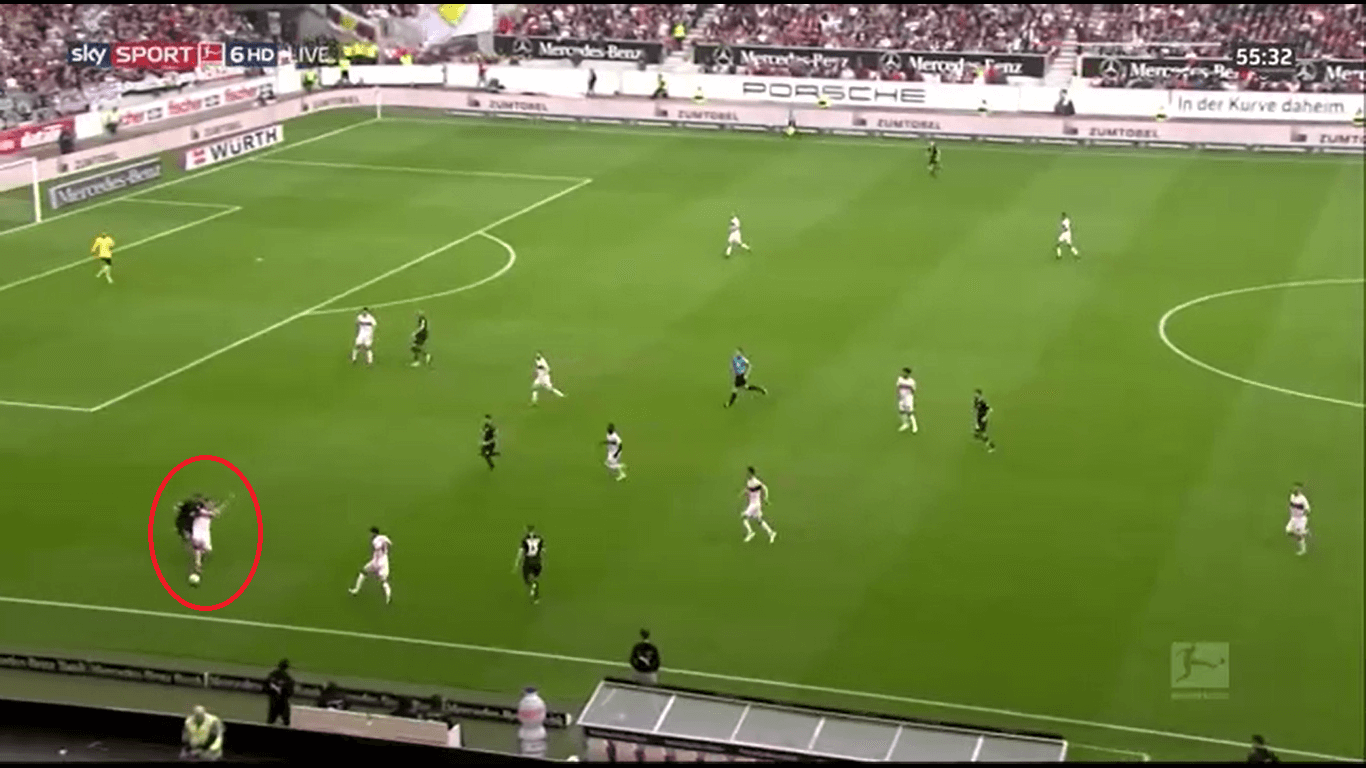 In the centre, he is also able to use this kind of aggressiveness. Being 1.86 meters tall, Kabak is physically strong and wins almost 65% of his duels. Here, we see an example of how he does that. 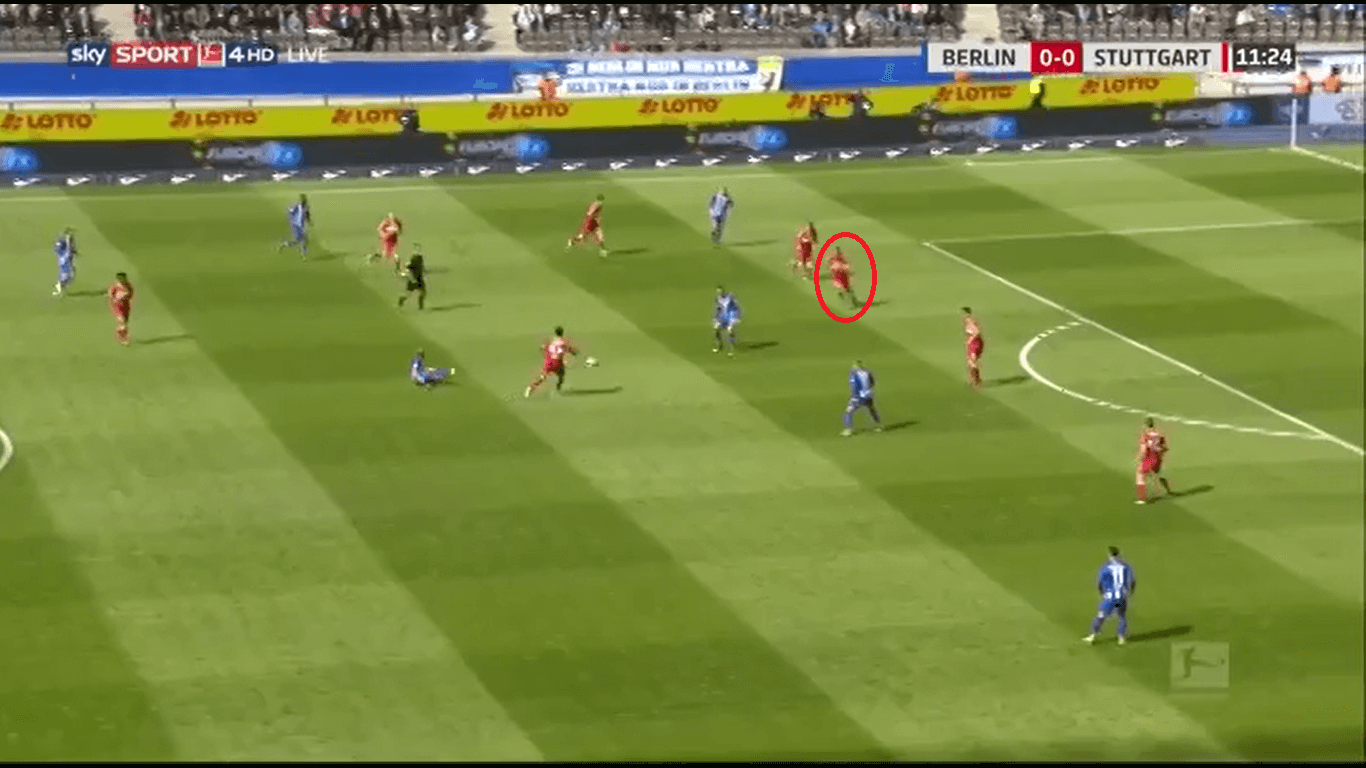 Before the opponent even receives the ball, we see Kabak already closing the distance, which underlines his anticipation and reaction skills. Even though he could be positioned a little more centrally to minimize the distances within the backline, Kabak makes up for this thanks to his high energy level. 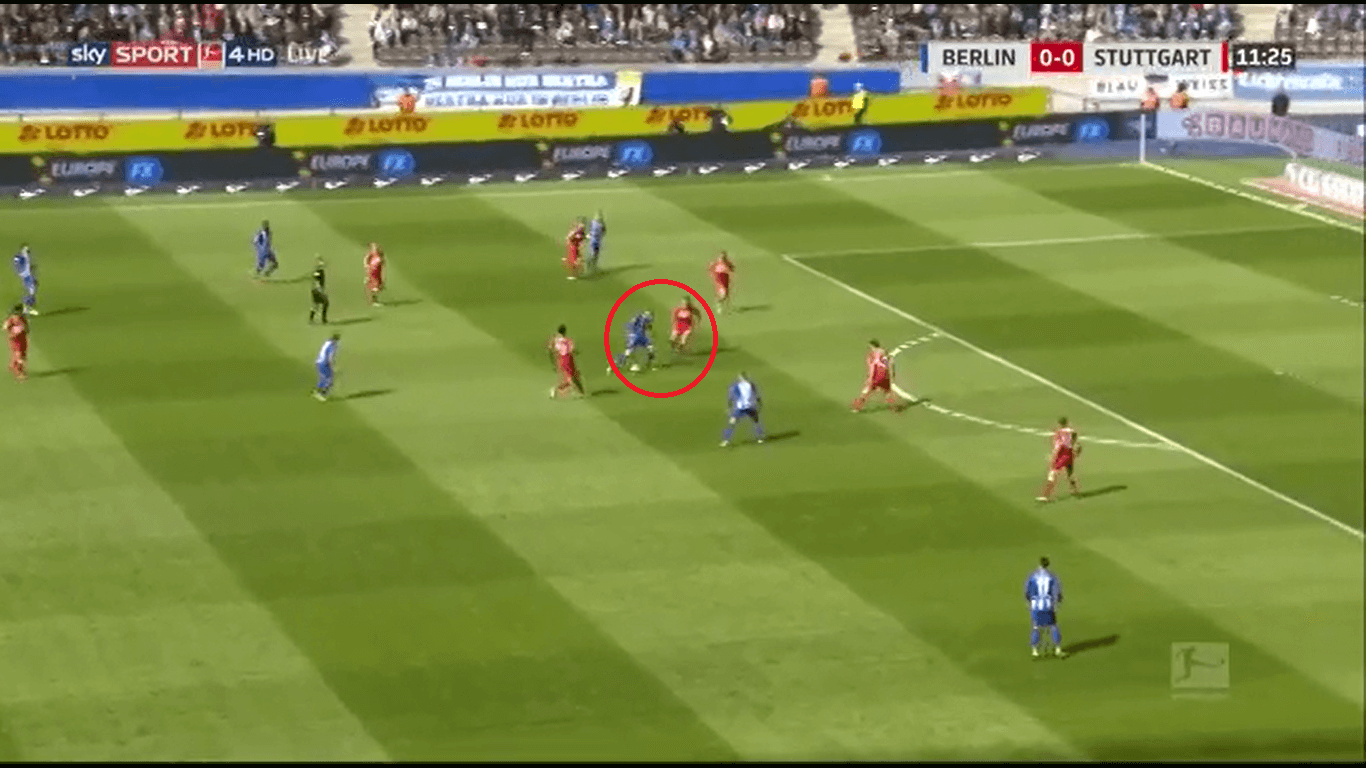 The second his opponent receives the ball, Kabak is able to oppose him. In the art of defending, it is important to reduce the tempo and oppose the opponent. Otherwise, if the defender just runs wildly towards the attacker, a little deception by the attacker would be sufficient to beat the defender. Here, Kabak does it just perfectly, reacting now to the attacker’s movement. 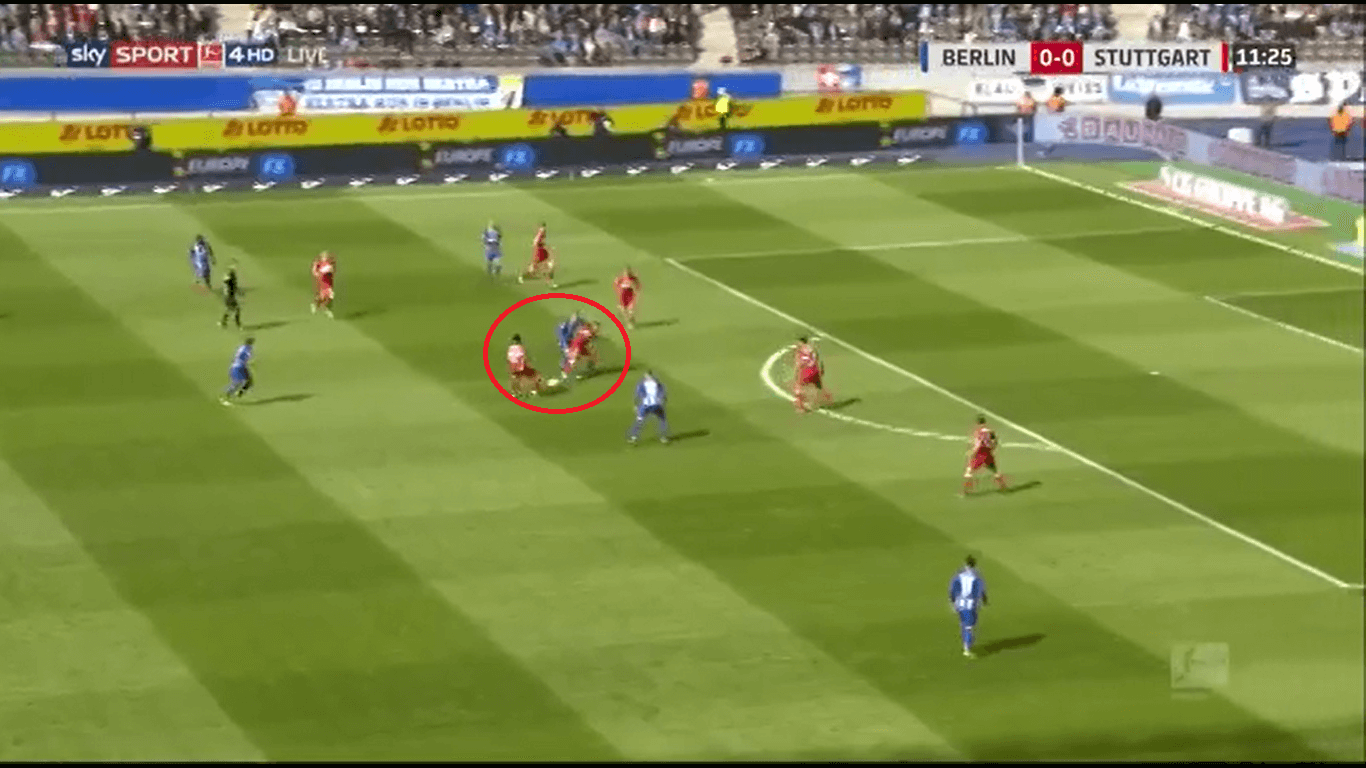 When the opportunity arises, Kabak finally uses all his strength and pushes the attacker aside. He wins the ball and was successful in stopping the attack.

For many centre-backs, defending high remains an issue as it is difficult against quick attackers. However, Kabak showed that this is not a problem for him. Thanks to his education at Galatasaray, he knows how teams who are often the favourite in league games have to play. Thus, he was trained early on in a team that was forced to defend higher up the pitch. Also, Stuttgart sometimes used a back-three where Kabak would also have to move to the wing as we have seen earlier. This proves that he has the necessary physical tools to defend a lot of space behind him. 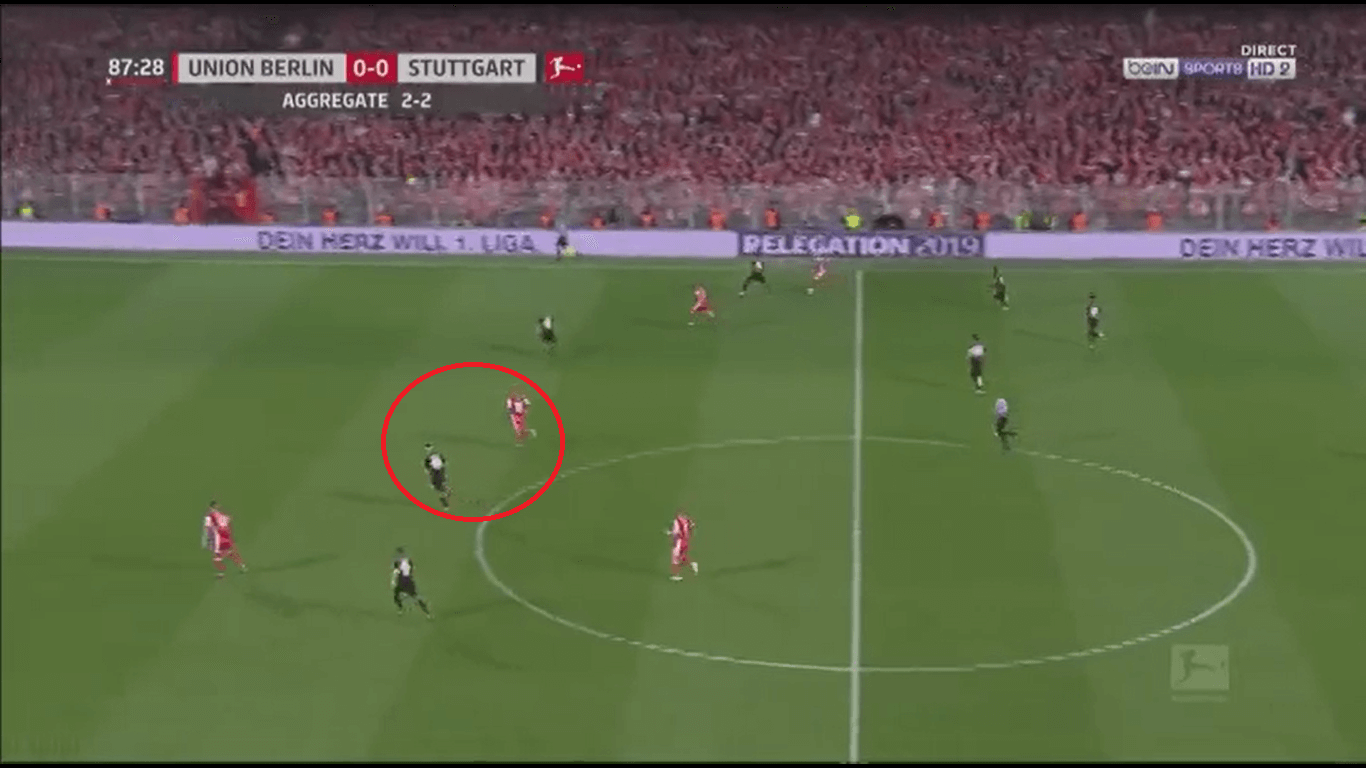 Here, we have a situation, where Union Berlin are counterattacking against Stuttgart. The situation kind of arises from chaos, which explains the bad positioning of Kabak. Nonetheless, he is able to track down the attacker. Berlin actually play a good ball into the open space, but Kabak’s speed is enough to prevent the attacker from scoring. 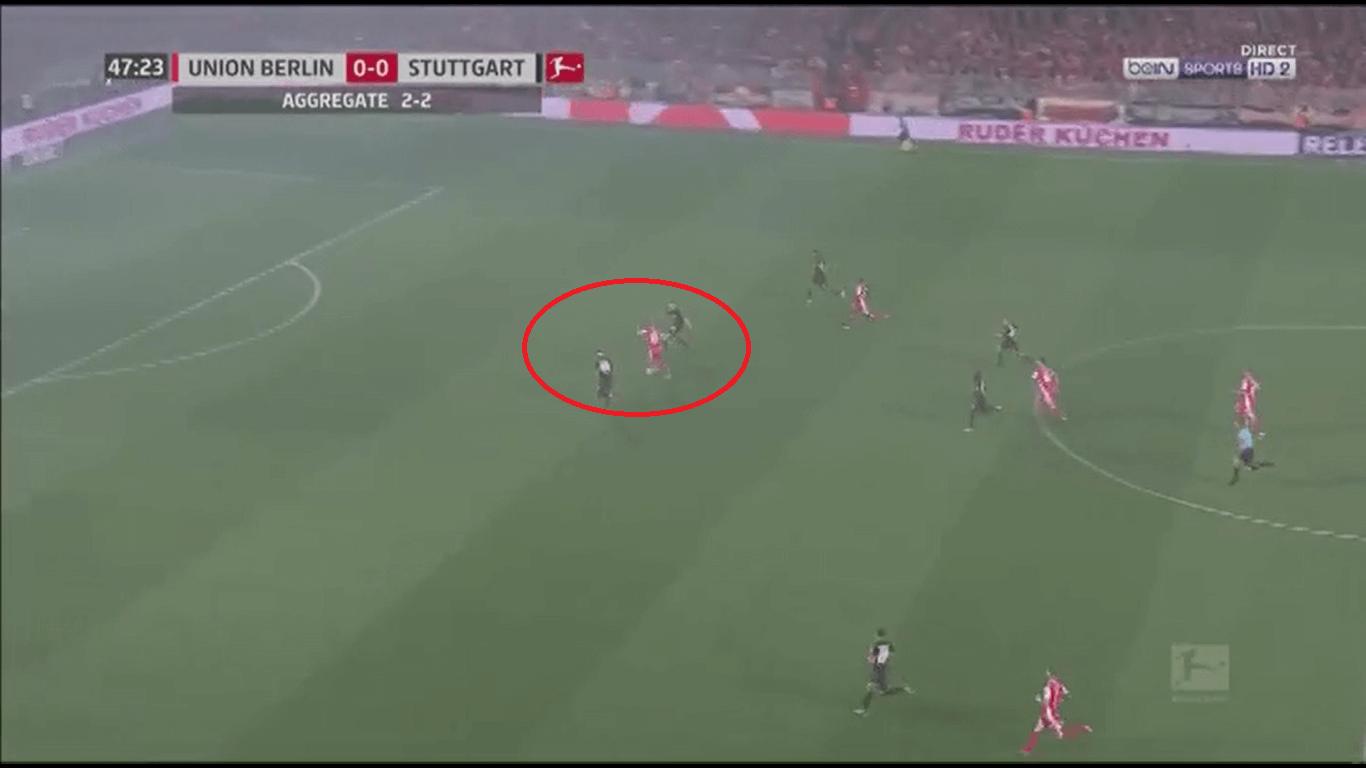 Similarly, earlier in the game, Kabak was again able to defend such a situation and create a 2vs1 superiority against the attacker. His quickness and his ruthlessness in this situation underline the previously mentioned points pretty well, as he is able to aggressively win the ball here. This shows that it is no coincidence, but rather a pattern that emerges. 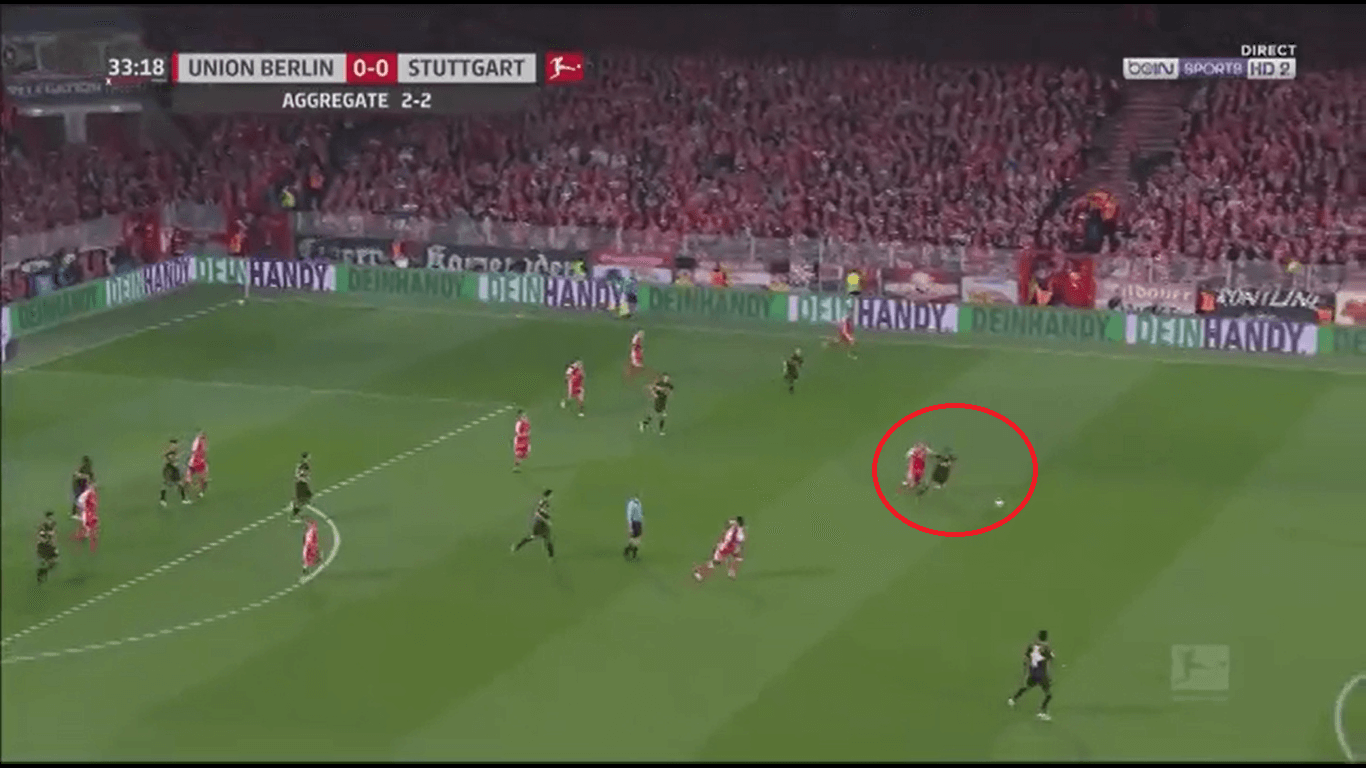 Furthermore, there are situations where he would put pressure on the attacker deep down in the opponent’s half. 35 meters from the opponent’s target, he is able to win the ball and secure it, since the image shows the end of that scene with Kabak turning back in order to secure the possession.

Minor insecurities in the air

Even though Kabak’s heading game is also decent (three goals in 15 Bundesliga games), occasionally he tends to show some weaknesses in this area. On some situations, he is not able to properly estimate the flight curve of the ball, which affects his positioning. 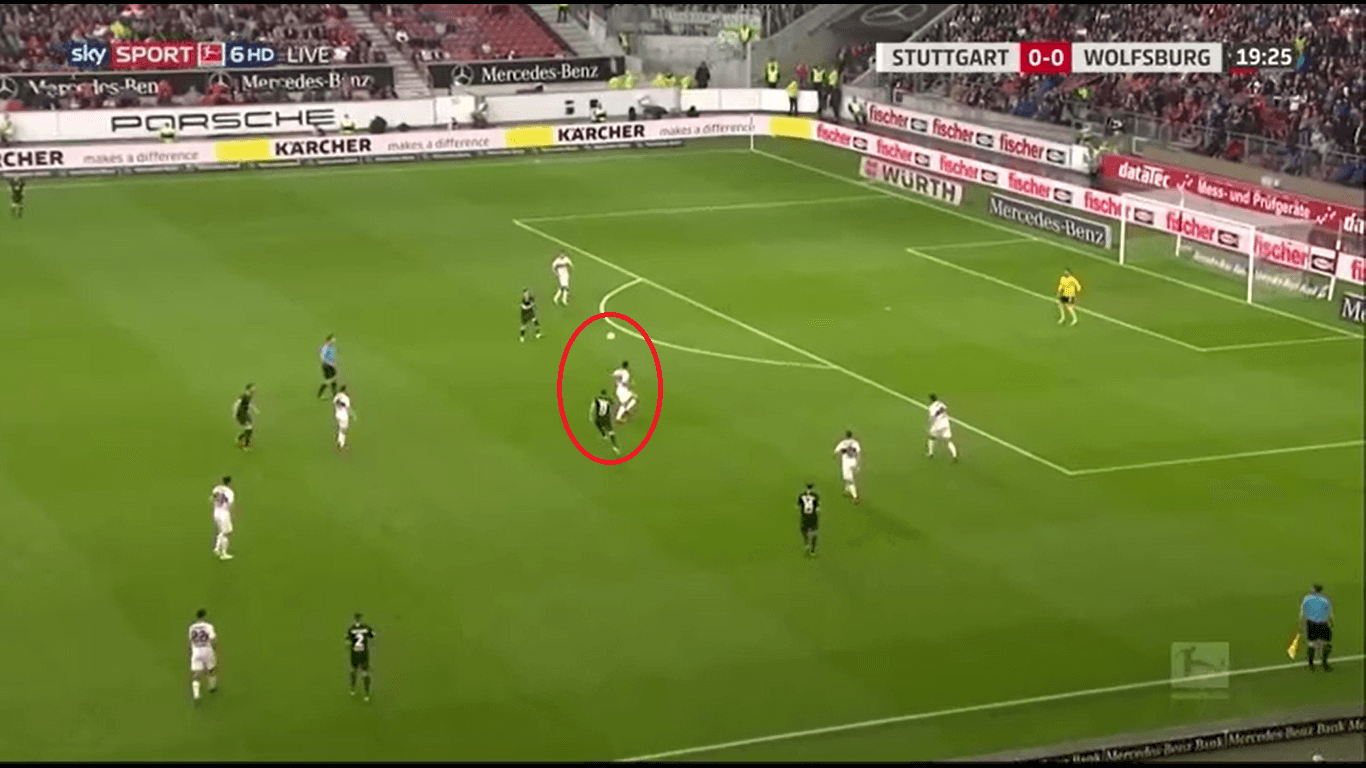 This is a situation, where he completely miscalculates the flight curve of the ball and therefore underestimates it. In such a position being so close to the own target, this is a deadly mistake. Also, since no one is expecting such a weird mistake, his teammates are not covering him. It could also be a concentration issue, as these mistakes happen irregularly, but this is certainly a field that he has to improve on. 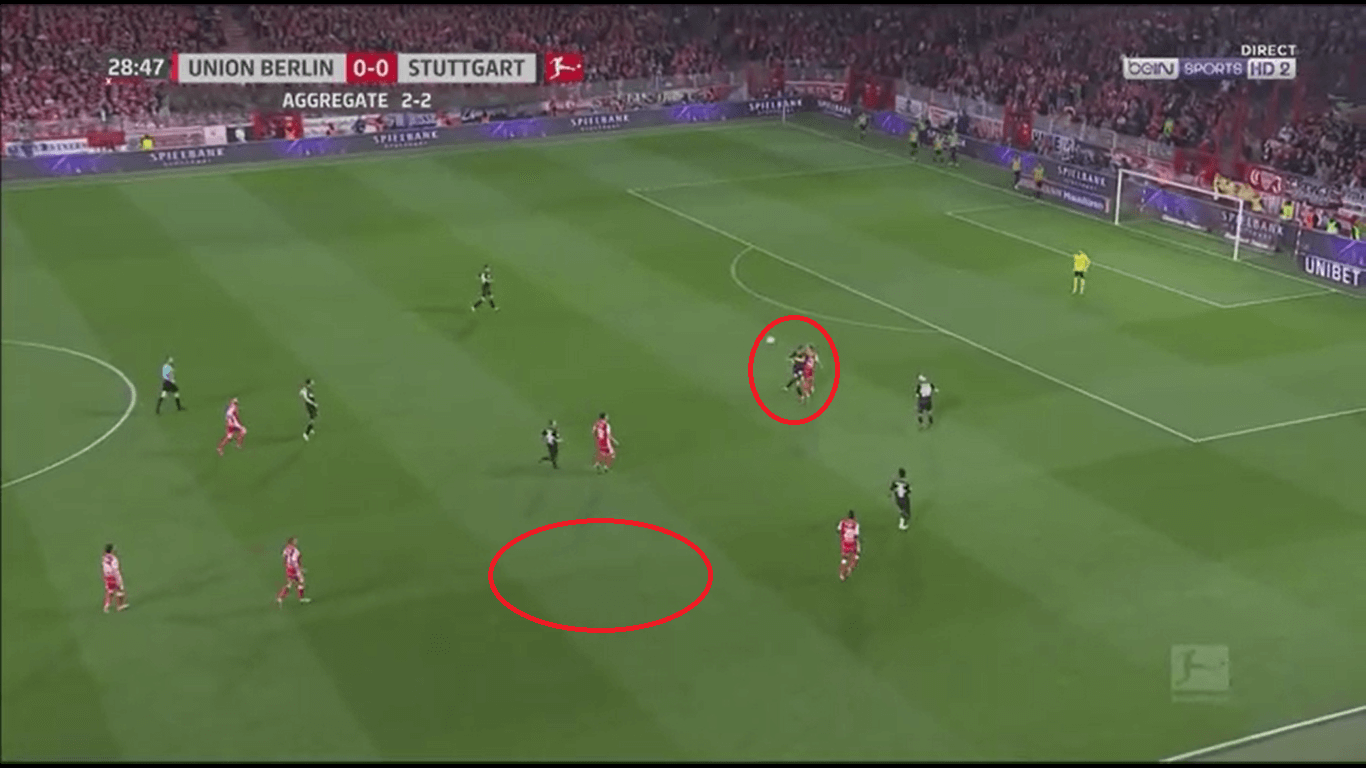 Also, winning the areal duel is often not enough if Kabak wants to reach the highest possible level. In this example, he heads the ball into no man’s land, which results in the opponent regaining possession. If he was able to head the ball to the right-back nearby, so that the team would gain possession, this would be optimal. Even though this is criticism at a high level, it is also something Kabak should aim to improve if he wants to become a world-class player. There are many examples of him heading the ball into non-optimal space when defending long balls.

Ozan Kabak brings in exciting skills and physical abilities. The last season was really promising both at Galatasaray and Stuttgart. He has proven himself in the Bundesliga as well as in the Champions League, which is extraordinary for a 19-year-old. His defensive senses, such as a good positioning and great anticipation skills, are a fantastic base to further work on. This also allows him to use his physicality and tackle his opponents aggressively. Even though there are still small things he can improve on, such as his defensive heading, he will be a great addition to the Schalke squad. If it is required, he would also fit in in a high backline, depending on what Schalke coach David Wagner plans. We didn’t mention his build-up abilities though since Benjamin Pavard and Holger Badstuber were the experts for that in Stuttgart. This little question mark remains with Kabak, but this is also something that could be worked on, especially at such a young age. The future looks bright for Ozan Kabak.