The Derby has its own rules. That phrase is often true, as well as on this Saturday when Schalke 04 faced BVB at the BVB stadium. In a typical derby with a dominant Dortmund side, there were two red cards, including one for Marco Reus, and six goals. Schalke secured the win 4-2.

However, from a tactical standpoint, the game didn’t have much to offer analytically. In the first half, Dortmund had almost 80% possession but struggled to create any chances. Schalke, on the other hand, focused on defending and counter-attacking quickly. Although they scored four goals, the execution of the tactic shouldn’t be considered overwhelming but solid. Most of their goals came from set pieces. Overall, they only had an xG-value of 1.12 while Dortmund was capable of creating 1.1 xG-chances.

The main problem for Dortmund was their poor performance in possession. They never found a way through the 5-3-2 of Schalke. Consequently, this analysis will focus on Dortmund´s problems in possession and how (not) to play against a 5-3-2

Against Schalke, Lucien Favre chose his usual 4-2-3-1 with Roma Bürki in goal and the centre-back partnership of Julian Weigl and Manuel Akanji.

In trouble of real full-backs, the Suisse coach had to choose Wolf and Diallo as full-backs. Both usually stayed deeper creating a relatively flat back-four. Furthermore, Axel Witsel and Thomas Delaney occupied the six-space.

Up-front, Dortmund played without a real striker and focused on players capable of playing through tight spaces. Therefore, captain Marco Reus played in the ten-space supported by Jadon Sancho on the right and Raphael Guerreiro on the left side. Former Bayern player Götze started in the nominal striker role but often drifted towards the left side. 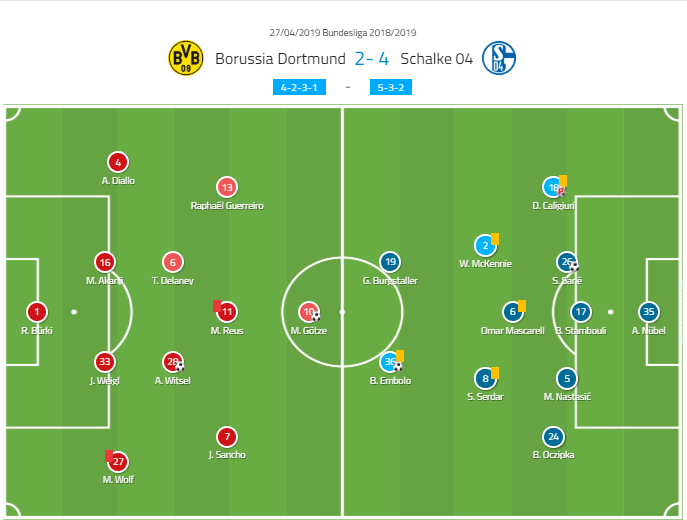 Huub Stevens on the other side tried strengthening his defence in the first place. Although his team struggled with a back-five in the last few games, the Dutch coach still chose the formation with Alexander Nübel in goal. Oczipka on the left while Caligiuri defended on the right side. Salif Sané, Benjamin Stambouli and Matija Nastasić focused on closing the spaces in the centre.

In front of the back-five, Schalke defended with three central midfielders in Omar Mascarell, Suat Serdar and McKennie. The only two attacking players were Breel Embolo and Guido Burgstaller.

I want to explain how Schalke’s 5-3-2 worked. Usually, Schalke positioned relatively deep, tried to make the centre as compact as possible and only pressed Dortmund occasionally. The centre-backs, for instance, stayed in their position and didn’t follow Dortmund’s attackers while the wingbacks pushed out of position in order to press the wingers or full-backs.

In midfield, McKennie pressed Diallo, moving on the same line as Embolo and Burgstaller who stayed passive, while Mascarell and Serdar were covering the centre. As a consequence of their system, Schalke was relatively compact close to the ball but left big holes on the ball far side which Dortmund couldn’t exploit due to their poor performance in possession.

Overload on the left side

The main focus of Dortmund in possession was the overload of the left side. With Guerreiro, Götze and Reus they had three players in that area which are skilled and comfortable under pressure. Usually, one of those three received the ball in a deeper position and played the first diagonal pass between the lines. After that, he would follow his own pass. Dortmund used a lot of lay-off passes to use the available space Schalke offered.

Indeed, Dortmund found space in the centre when they started their attack from the left side/left halfspace. Why? Because Schalke shifted towards that side. The right central midfielder moved wider in order to press, while the central midfielder would cover the offensive midfielder (most of the time Reus) which left the space next to him uncovered. Dortmund aimed for those spaces but could rarely take advantage of them.

The main issue was the lack of spacing. Due to the deep position of Schalke’s defence, BVB didn’t receive much space at all. Too often Götze and Reus would both tried to support which resulted in a lack of depth because of the missing striker.

Here, for instance, too many players occupied the same space which allowed Schalke to stay compact and reduce the distance between the defenders. Especially, when the left-back had the ball, he rarely found a diagonal passing option.

Due to the fact that Schalke’s central midfielder moved out of position to press and the deep positioning of the strikers, every diagonal passing lane from the wing towards the centre was closed. However, Dortmund didn’t react intelligently on those issues. They even tried to use more players in the same zone to create more passing options resulting in less space for every attacker.

As you can see here, Wolf (marked red) is the only one occupying the far side while the rest of the team has a close connection to each other. Even though Dortmund were able to pass the ball between the lines quite often, they then lacked the necessary options to continue the attack. Due to their deep midfielders and the unbalanced shape, the number of passing options was limited and the possibility to switch non-existent.

Furthermore, it is just extremely hard to control the ball while moving forward and find a quick solution under pressure. Quite often the BVB attackers received the ball between the lines without being capable of controlling it properly.

Dortmund could create the most promising offensive scenes when Guerreiro received the ball after a switch in the left halfspace. Then the Portuguese midfielder could immediately pass the ball between the lines. Due to the time Schalke needed to shift to the other side, Götze, Reus and Guerreiro had the necessary space to get behind the midfield line. However, then the lack of attacking options led to unsuccessful opportunities.

Generally, switches are extremely valuable against a 5-3-2. Because of three midfielders in the centre, the defensive can’t cover the ball far side properly. Therefore, the attacking side finds space after on the far side after switches which they have to attack quickly. In the game against Hoffenheim, Dortmund had a scene which was the perfect example of how to play attack against a 5-3-2. 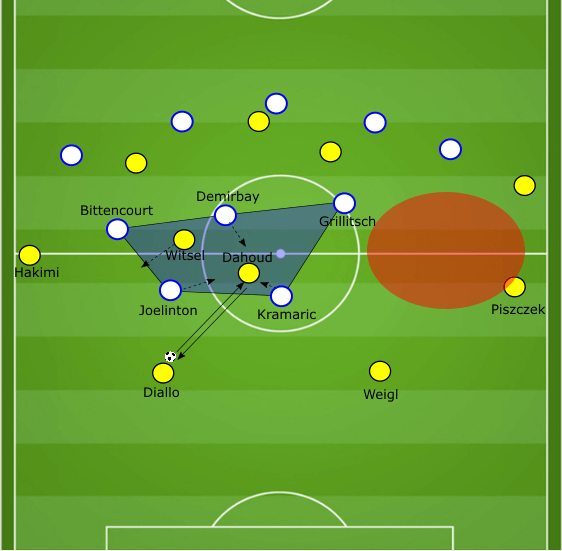 They manipulated Hoffenheim’s pressing by passing the ball to Dahoud between the lines. Immediately three players see the chance to press and move out of position leaving more space on the left side. 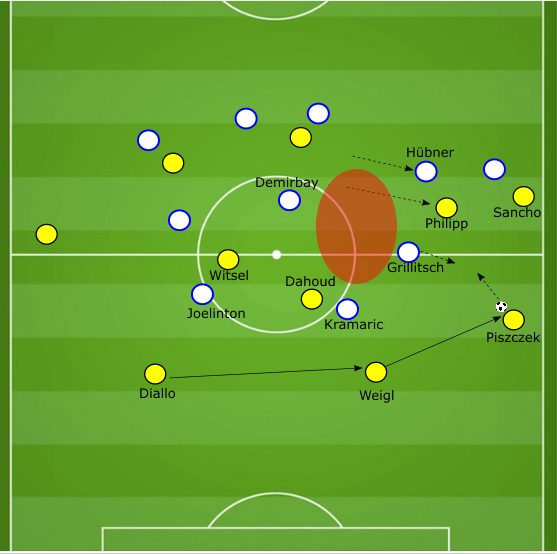 After Dahoud passed the ball back to Diallo, they quickly switched to Piszczek on the right side. Consequently, Dortmund find space between the lines because the 5-3-2 of Hoffenheim don’t offer the necessary horizontal compactness. Logically, Dortmund were able to exploit the gaps in the halfspace, which resulted from the ball near compactness Hoffenheim had on the right side and the fact that they couldn’t switch enough to their left side. 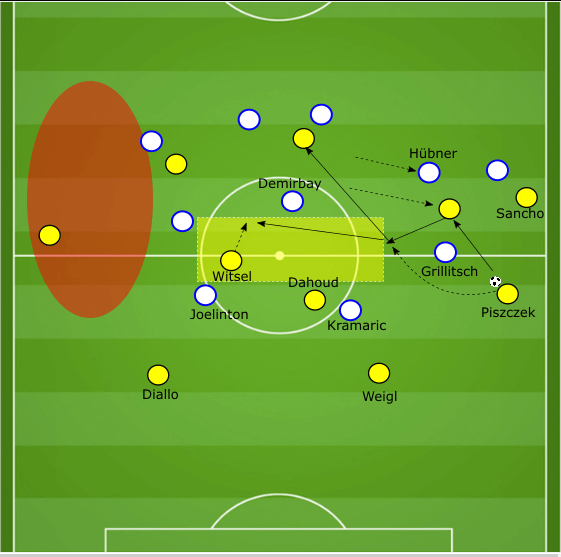 Now, Dortmund can easily attack against the direction in which Hoffenheim’s defenders moved. The good positioning of their defensive midfielders, Witsel and Dahoud, and the number ten provided multiple passing options for Piszczek. Against Schalke, neither of those passing options exist nor did Dortmund get diagonal access to the centre. Jadon Sancho’s positioning along with the poor structure for switches was the reason.

As I already mentioned, Dortmund weren’t capable of using the weaknesses of the 5-3-2. One reason was their poor structure for switches. Too often more than five players were positioned outside of Schalke’s defensive block resulting in long ways to switch. 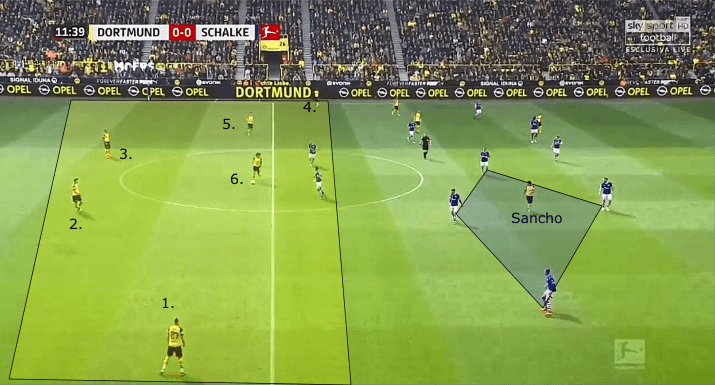 As you can see here, six players are positioned outside of Schalke’s defensive block. Due to the relatively deep and wide full-backs, the passing angles into the midfield were rather suboptimal. Neither the full-back nor the centre-back was able to create diagonal passing lanes or find a central midfielder.

Here, for instance, Dortmund overloaded the right side but when Wolf received the ball he had no diagonal passing option and the centre-back was positioned deeper. If he would have moved forward (towards the yellow spot) a simple switch with a following pass between the lines would have been possible.

Although Delaney could often be found between Schalke’s lines, the Danish midfielder had no chance to turn and play passes to the offensive midfielders.

Axel Witsel, on the other hand, preferred to stay outside of the block. However, only occasionally was he dropping between the centre-backs. This could have been one solution. Building-up with a back-three and higher full-backs would have created better passing angles and the opportunity for Akanji and Weigl to attack the openings after switches.

Due to this structure, Guerreiro often dropped to receive the ball and start the attacks. Consequently, Dortmund had fewer players between the lines which made it easier for Schalke to defend. Maybe Mo Dahoud in midfield and Guerreiro as versatile attacking left-back would have been the solution against Schalke’s defence. 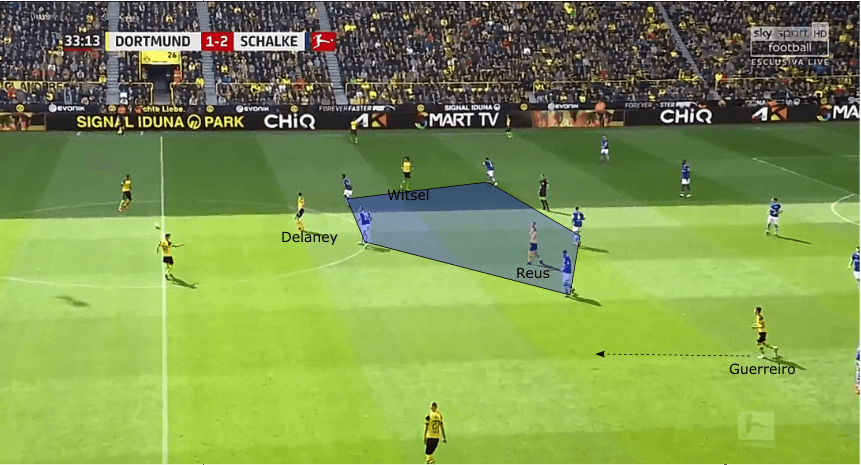 Furthermore, when Dortmund occupied the space between midfield and the attacking line of Schalke, the passing angles were still suboptimal and the midfielders isolated. Sporadically, a 4-3-3 build with one defensive midfielder and Reus was observable. But, notice that neither Reus nor Witsel could actually receive the ball without getting pressured immediately. Again, wider centre-backs and a deeper central midfielder could have been beneficial in order to attack the spaces next to the midfield line.

Another problem regarding the structure of Dortmund against the defence of Schalke was the position of Jadon Sancho. The English winger couldn’t use his full skillset because he often received the ball in tight spaces without any support from his teammates. The problem was that he moved in the halfspace while Wolf stayed deeper.

Because of the slow switches and suboptimal passing angles, Schalke could easily close the passing lane to Sancho. 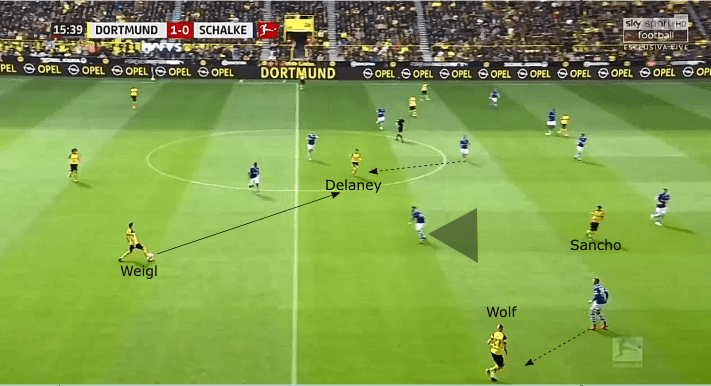 Here, they used a back-three but moved the ball to slow. Although Weigl could pass the ball to Delaney, Schalke were still able to pressure while the passing lane to Sancho got closed by the left central midfielder. As you can see, Schalke created a 3v2 overload on their left side, stopping Sancho and Wolf from attacking.

Support by the other offensive midfielders, along with a more aggressive approach of Weigl with the ball, would have made the situation more complicated to defend. Maybe, a deeper Wolf along with a wide Jadon Sancho and Götze or Reus moving in the central space would have caused more trouble and miscommunication in Schalke’s defence as well.

It was a typical derby overall. Great atmosphere, intense game and two red cards (both for Dortmund). Due to Bayern’s draw against Nürnberg, the BVB still have the chance to win the championship, however, they have to fix their structural issues in possession to create more chances against a deep defensive block. The game showed that details in positioning, movement and ball circulation make the difference between a dangerous offence and one which doesn’t create any chances.