Stade Rennais awaited no less than French champions PSG in the French Cup final. Despite PSG being the clear favourites and going in front early in the match, Tuchel’s side struggled against Rennes fast wing driven attacks.

The following tactical analysis will outline the issues that PSG had, as well as the tactical tweaks that enabled Rennes to beat PSG.

As expected and presumed in our preview, Stade Rennais lined up in a 4-4-2 formation. Although Hatem Ben Arfa played as a playmaker behind striker M’Baye Niang when in possession, the Frenchman also positioned himself alongside Niang during the defensive phase to form a line of two up front. Moreover, head-coach Julien Stéphan lined up fast winger Sarr and full-back who were supposed to attack down PSG’s “weak” left side.

Thomas Tuchel, on the other hand, deployed a 3-4-3 system in possession. Therefore, Neymar and Ángel Di María attacked down the half-spaces while Kylian Mbappé played as a centre-forward. In midfield, Julian Draxler formed a double pivot together with Marco Veratti. When defending, their shape changed into what seemed to be an asymmetrical 4-3-3 since left wing-back Bernat moved backwards and formed a back four.

PSG had a lot of possession at the beginning of the game. To sustain possession and progress up the pitch, Tuchel tasked his side to circulate the ball within their back three and await the opportunity to play towards their attacking three or out wide. When being pressed, PSG’s double pivot in the persons of Draxler and Verratti moved out of the cover-shadow of Rennes’ striking duo and thereby enabled their defenders to overplay the first line of press.

In their 4-4-2, Rennes attempted to close down all passing lanes into the centre. Moreover, they aimed at preventing the PSG midfielders to receive the ball between the lines.

To create numerical superiority in the back line, the full-backs of Rennes positioned themselves very narrow and marked PSG’s half-space attackers. As a consequence, Rennes could not defend the whole width of the pitch.

Therefore, left wing-back Juan Bernat and his counterpart Dani Alves on the right side were offered plenty of space. Dani Alves especially used this to get behind the last line of defence. By putting in crosses, he created the first chance of the game when assisting Neymar. Furthermore, one of his crosses led to a corner kick.

This corner-kick was converted by himself with a well-timed and precise volley shot from the edge of the penalty area.

In defence, Tuchel’s side switched to a back-four formation. Therefore, left wing-back Bernat was supposed to drop into a full-back position to form a line of four. PSG were often caught on their left wing. With Bernat dropping into a full-back position, PSG offered Rennes a lot of space. Neymar missed to support during the defensive phase. Furthermore, central midfielder Draxler did not apply enough pressure on the left wing.

Since the organisation of their defensive shape took too long at times, PSG still had a line of three at the back. Another issue of PSG’s defensive approach was that all defenders were focused on their direct opponents. Rennes well exploited that by dragging defenders out of their positions. The most common movement was that Ben Arfa would drop into midfield to create space for striker Niang as in the situation below.

The latter then made use of the space and received the ball in a 1v1 situation against centre-back Marquinhos in the situation above. Since all other defenders only watched their direct opponents, they were unable to cover their central defender.

As a result, Niang could use the 1v1 situation to get himself into a good finishing position. Although his shot only hit the post, this situation was the beginning of a more courageous Rennes.

Apart from the above-mentioned movement to drop into midfield, playmaker Ben Arfa also lent his side creativity during transition phases. After winning the ball, Rennes often searched for Ben Arfa who was capable of making the right decision. 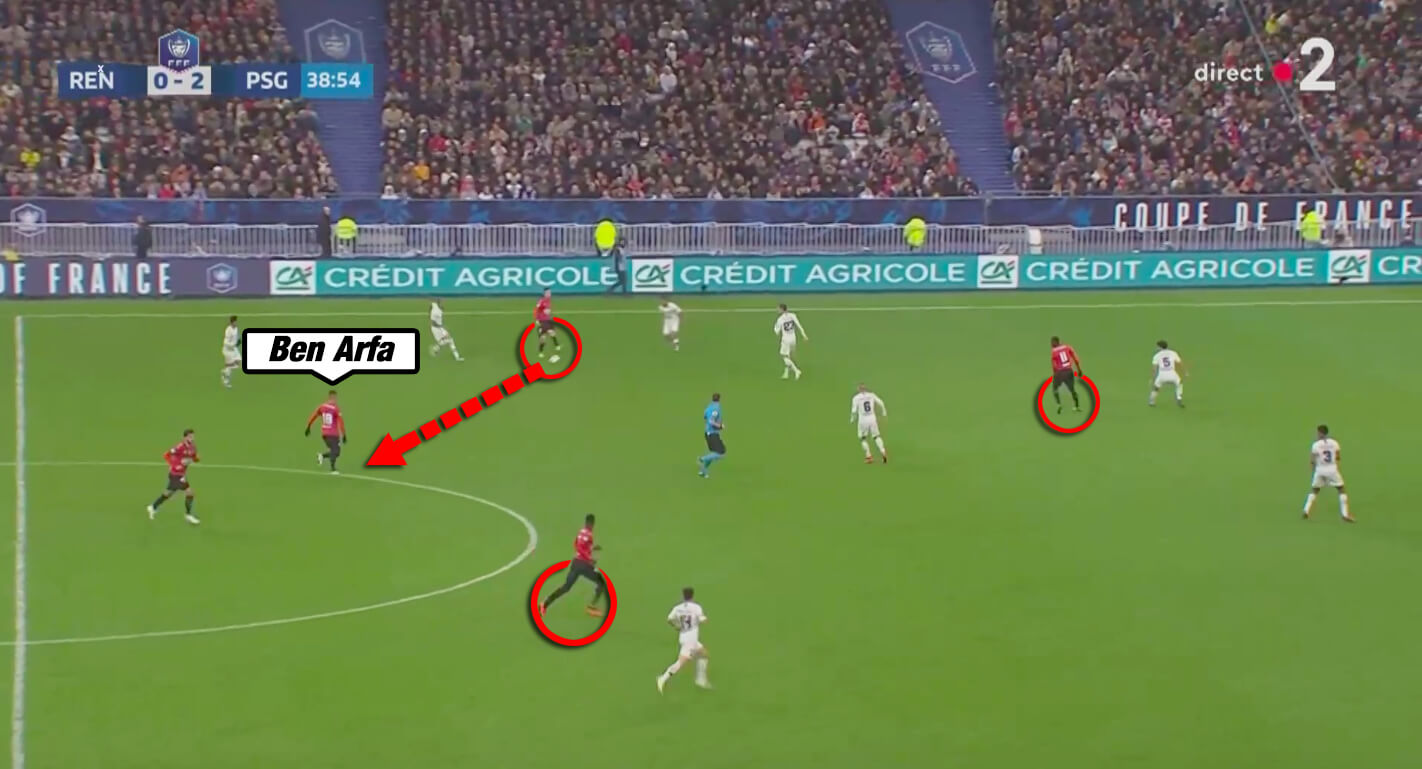 In the above-displayed situation, for example, Ben Arfa decided to switch to the right side. 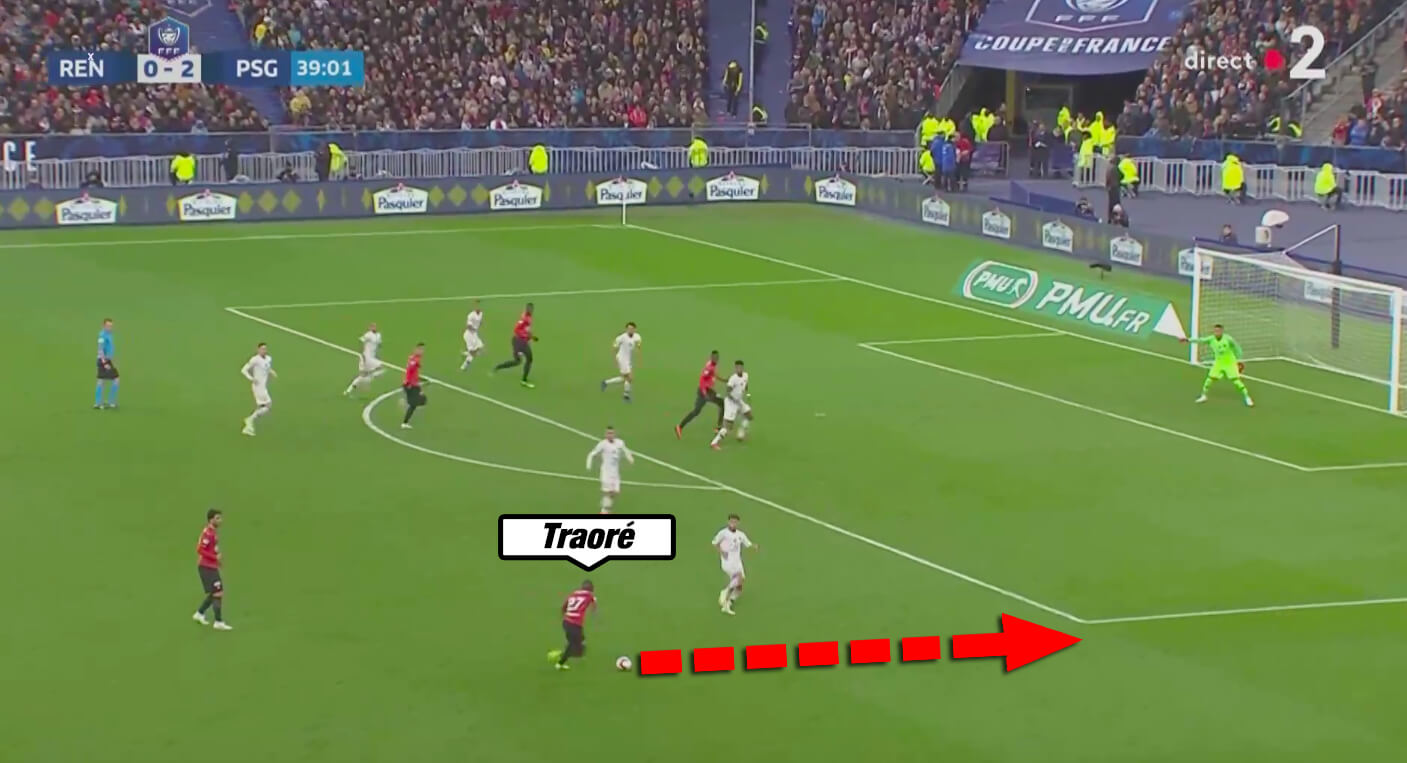 On the right wing, right-back Traoré could support the attack while right winger Sarr tucked inside.

The cross was deflected by defender Presnel Kimpembe, leaving his goalkeeper and former La Liga player Alphonse Aréola no chance to save the ball.

Stade Rennes scored both of their goals in phases when PSG struggled to sustain possession.

At the beginning of the second half, two issues of PSG‘s attacking phase were on full display. Firstly, their double pivot did not always cover the attack. Whereas usually, one midfielder should cover the attack in front of the back line, in reality, Draxler and Verratti sometimes both moved up the pitch and left a gap between midfield and defence.

With the pace of Rennes’ wingers, Stéphan’s team could utilise this when regaining possession. In situations with equal numbers, PSG’s defenders had to drop and wait for their midfielders to track back. But since Rennes players had an advantage in pace, the underdog could finish some of these attacks. Only goalkeeper Aréola prevented his side from conceding the equaliser.

Another attacking issue of PSG’s was missing switches of play. Opposite to the first half, the French champions did not make use of the free wings that much anymore. In the situation below, for instance, PSG did not play a diagonal ball towards right wing-back Dani Alves. Instead, they switched play with the help of their back three. As this took too long, Rennes shifted towards the side of Alves and thereby prevented PSG from progressing up the pitch.

Since Rennes were capable of decreasing ball near space with the help of vertical compactness, PSG struggled to create goal scoring opportunities.

Last but not least, PSG’s defenders had issues in their defensive positioning. Dani Alves as the ball far wing-back, for example, was often unsure whether to close central gaps or to help right centre-half Colin Dagba. This enabled Rennes to create chances from crosses.

In the 75th minute, PSG coach Tuchel brought on midfielder Leandro Paredes for the wide attacker Di María. With that substitution, Tuchel intended to change the system of his side to a 3-5-2. Paredes took over the role of the single pivot in front of PSG‘s back three, while Draxler and Verratti moved up into advanced midfield positions. Up front, Mbappé and Neymar attacked as a striking duo.

The change of formation lent PSG more cover during their own attacking phase with Paredes as a holding midfielder. In addition to that, Verratti and Draxler could make use of their offensive qualities and were able to thread through passes towards their fast strikers. The longer the game took, PSG gained more possession again and were, therefore, able to keep Rennes away from their own goal.

Since PSG could not convert further chances in regular and additional time, a penalty shootout had to decide the winner. After both sides scored seven penalties, PSG missed for the first time and enabled the underdogs Stade Rennais to win the French Cup with eight penalties.

All in all, PSG lacked efficiency in front of the Rennes goal. Despite having the bigger amount of chances, Tuchel’s side were unable to outscore Rennes in regular time.
Rennes, on the other hand, were capable of keeping a compact defensive shape. Moreover, they made clever use of their fast wingers in counter-attacks. Last but not least, Rennes could penalise PSG’s defensive issues on the wings. Due to these aspects as well as some fortune in the penalty-shootout, the underdog beat French champions PSG.