Leicester City cruised to a comfortable 3-0 victory over Arsenal, who had to deal with the set back of Ainsley Maitland Niles’s first-half red card. A header from Youri Tieleman’s set the Foxes on their way in the second half, before a late brace from Jamie Vardy sealed the result.

While all three of Leicester’s goals came in the second half after Maitland Niles’s red card, the hosts already looked to have had had the beating of Unai Emery’s sluggish Gunners. Prior to the 35th-minute dismissal, Leicester had already managed four shots on target. Arsenal had managed just one.

The Gunners were lax and passive in their resistance to Leicester, with goalkeeper Bernd Leno being called into action frequently. The German was forced into making nine saves.

The result sees the Foxes remain three points behind Wolves in the race for the ‘best of the rest’ in the Premier League. Arsenal, meanwhile, have seen their top four aspirations take another hit.

This tactical analysis will look at how the match played out.

Brendan Rodgers deployed his Leicester side in a 4-1-4-1 for this match. Wilfred Ndidi anchored in defensive midfield behind Hamza Choudhury and Youri Tielemans, while James Maddison and Marc Albrighton flanked. Jamie Vardy, of course, was at centre forward.

The energy of the Foxes’ midfield proved far too much for Arsenal in this match. Their central midfield three of Ndidi, Choudhury and Tielemans made a total of 10 tackles between them. Maddison once again proved to be a class act with three key passes and an assist. 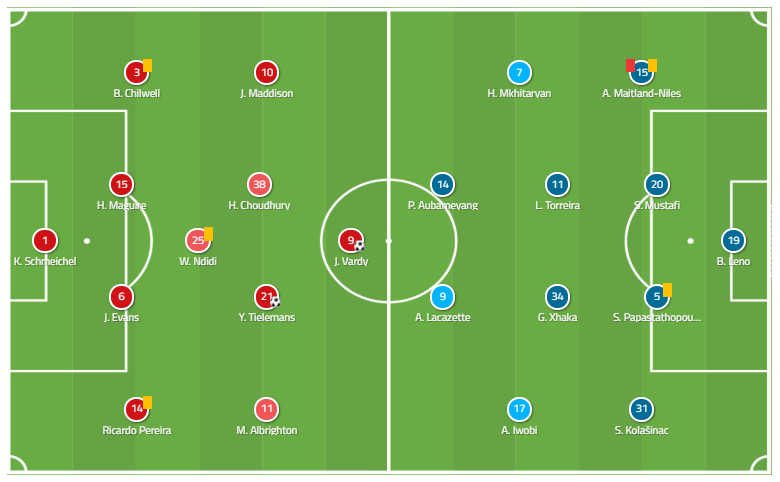 Arsenal lined up in a 4-4-2 at the start of the match. Unai Emery decided to partner Pierre Emerick Aubameyang up with Alexandre Lacazette up front, while Lucas Torreira and Granit Xhaka occupying central midfield.

Alex Iwobi started on the wing for the Gunners before being hooked at half time in a reaction to the Maitland Niles red card. Laurent Koscielny replaced the Nigerian and moved to centre back, with Shkodran Mustafi moving out to right back.

A passing and possession-based style has been a hallmark of Brendan Rodgers’ approach throughout his managerial career. The Northern Irishman seemingly has maintained this in his new role as Leicester manager.

Something he implemented against Arsenal was having Hamza Choudhury drop into the left back position during the build up. This allowed for Ben Chilwell to push on down the left wing, while James Maddison tucked inside to find space in the midfield. 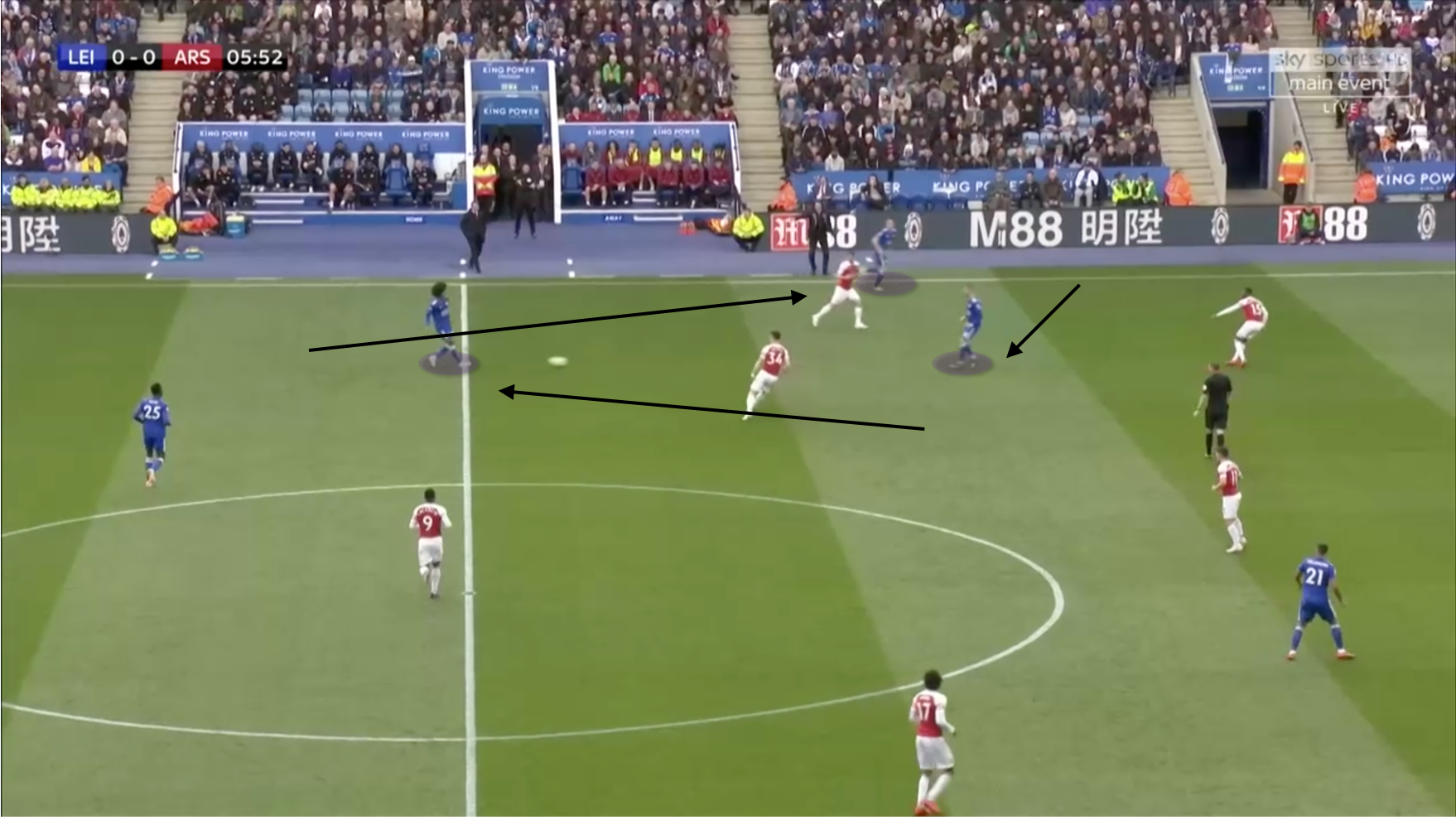 This may have been a ploy put in place with expectancy that Arsenal might play a 3-4-3, as they have done on several occasions this season. The plan could have been to draw the wide forward and wing back out of position to allow space for Maddison and Chilwell on the left. The Gunners deployed a 4-4-2, however, with Henrik Mkhitaryan not being easily drawn out of his position on the right wing. 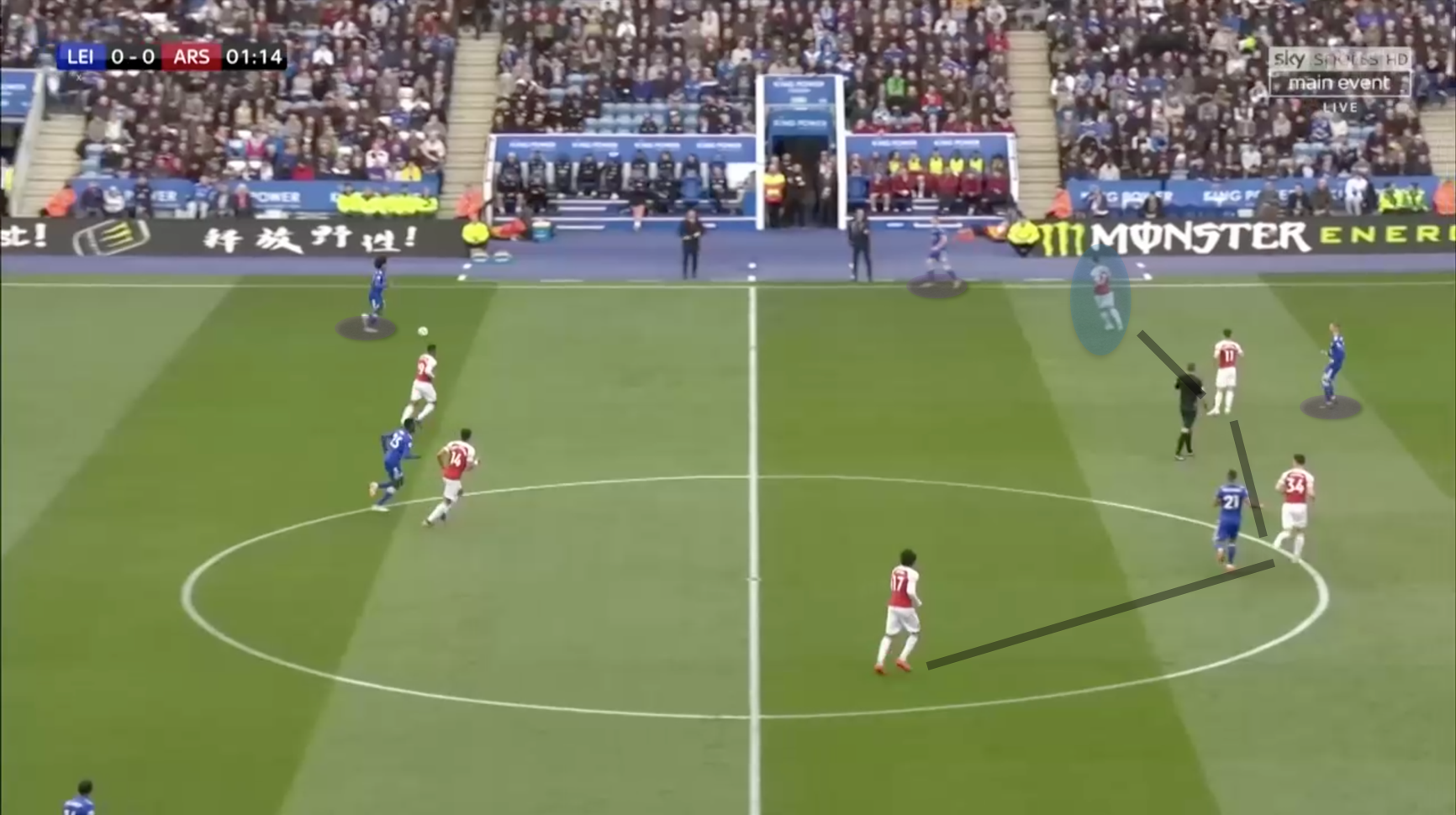 The second half saw a change of approach from Rodgers with Arsenal going down to 10 men. He opted to introduce Harvey Barnes to play on the left and provide more width than Maddison, who dropped into a central position. This move helped Leicester stretch Arsenal, an important tactic to utilise with the Gunners a man down. 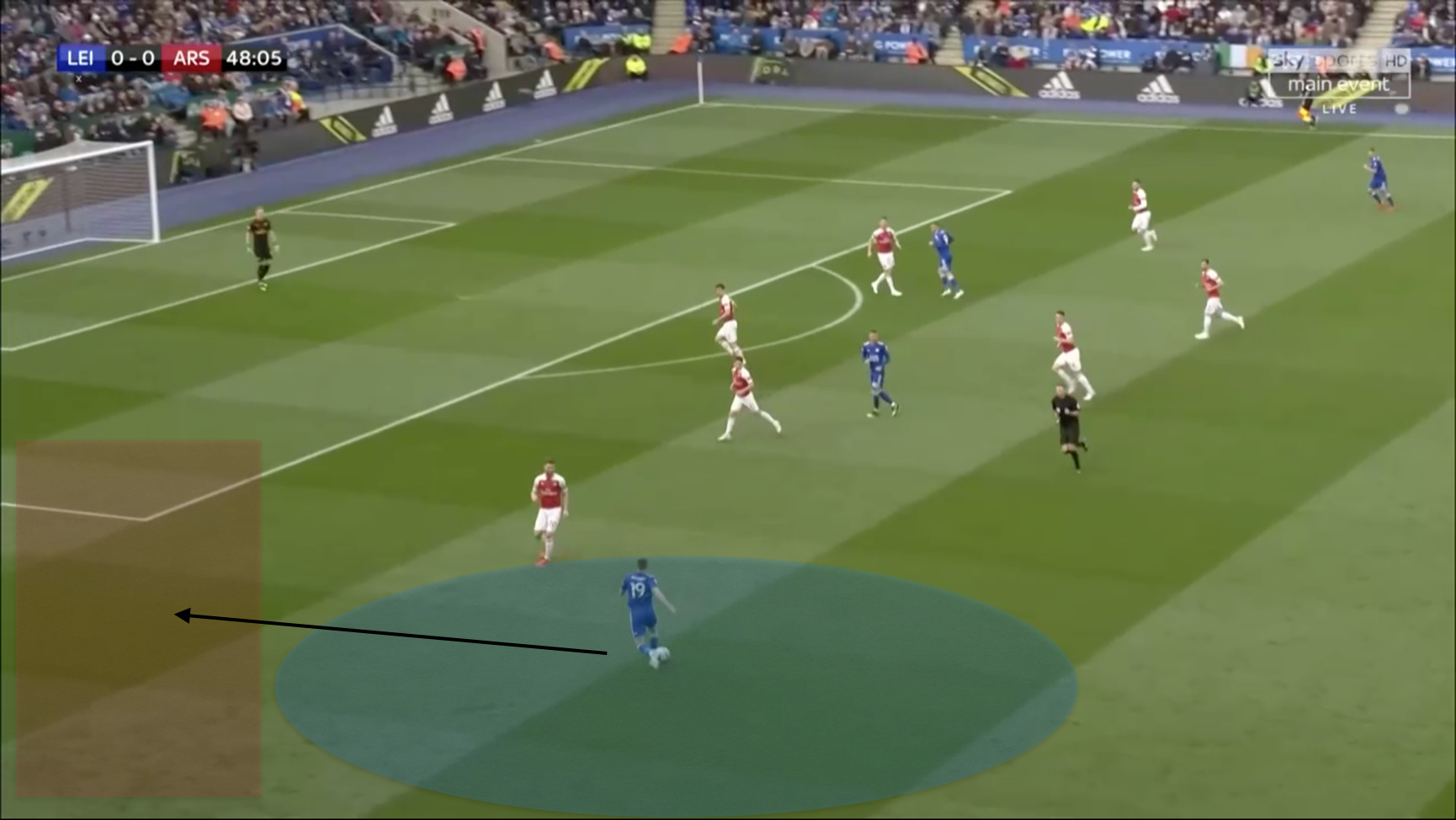 This eventually paid dividends as the Foxes took the lead in the 59th minute. Interplay on the wide right stretched Arsenal’s defence sufficiently to allow Maddison space to cross. His excellent delivery found Youri Tielemans to head Leicester into the lead. 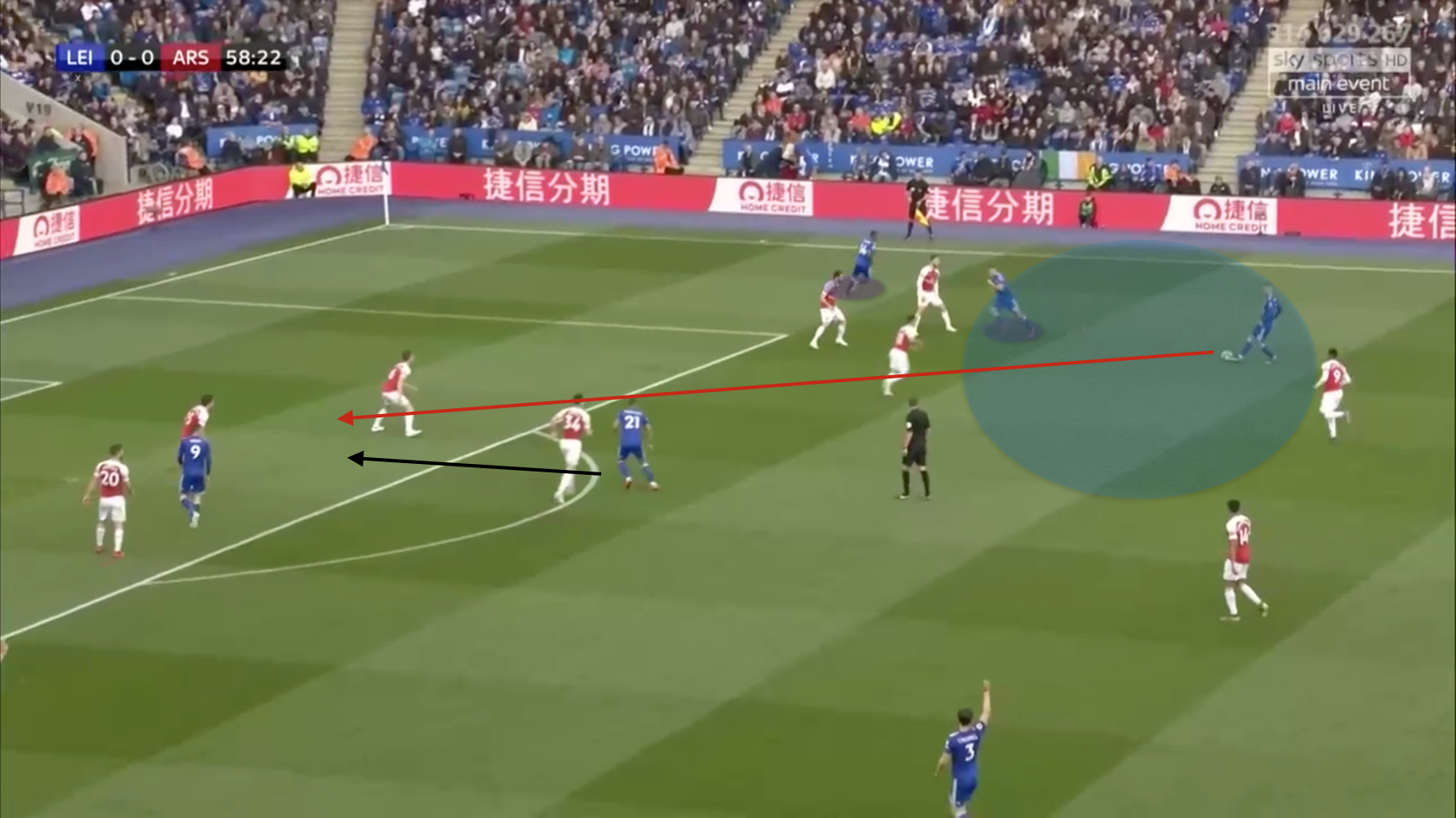 Unai Emery surprised some with his 4-4-2 formation on Sunday. A 4-2-3-1 was out of the question with Aaron Ramsey and Mesut Özil injured, so the Spaniard went with a front two instead.

In this 4-4-2 shape, the organisation of the Gunners was generally at a good level. Where they let themselves down, though, was intensity. As we can see below, Arsenal’s shape was very solid and organised, but Foxes right back Ricardo Pereira is being afforded far too much space. 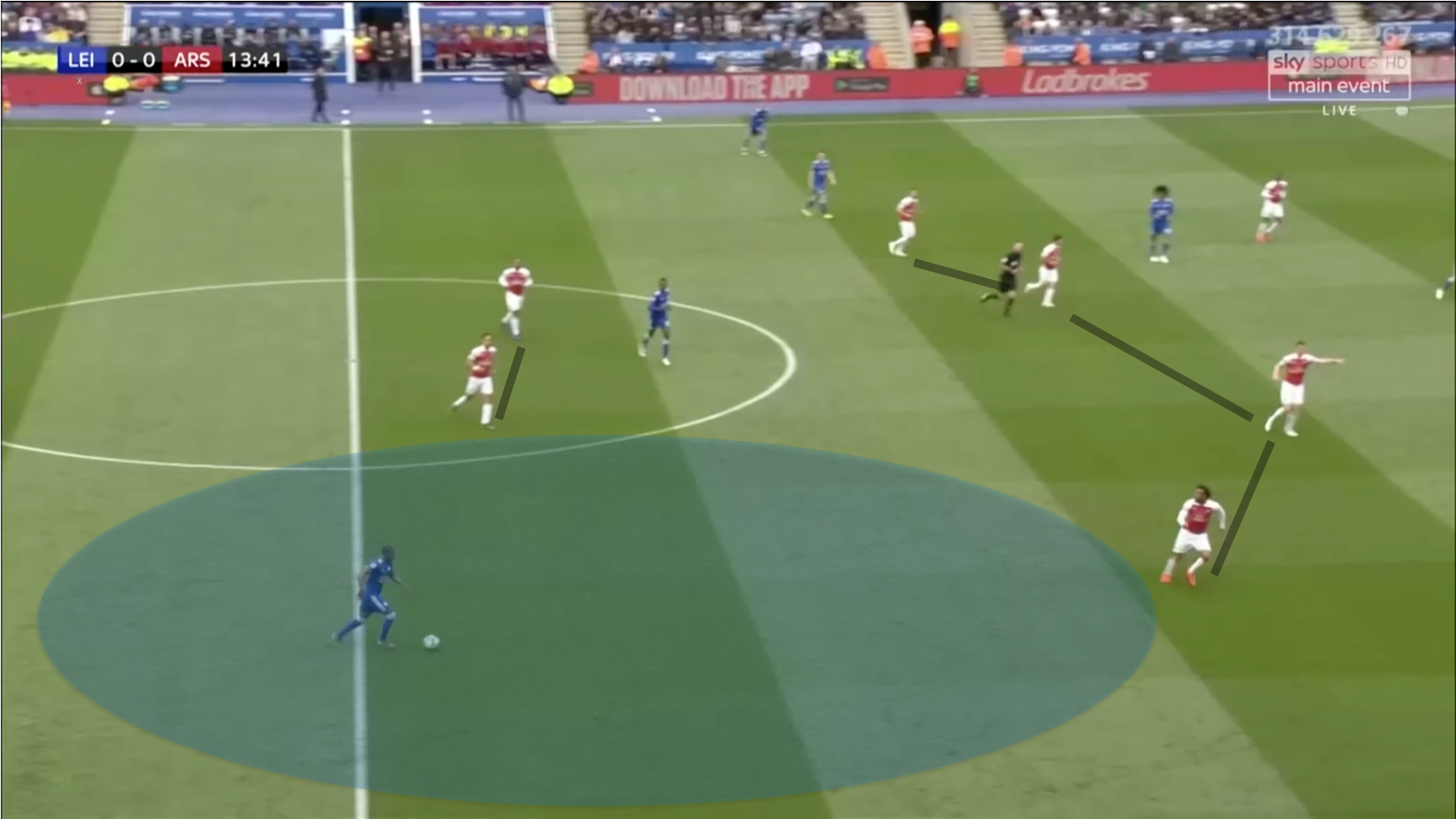 When Arsenal did spring their pressing into life, it tended to work relatively well as can be seen below. Henrik Mkhitaryan is forcing Hamza Choudhury off the ball after Lucas Torreria has forced Marc Albrighton into a poor pass. 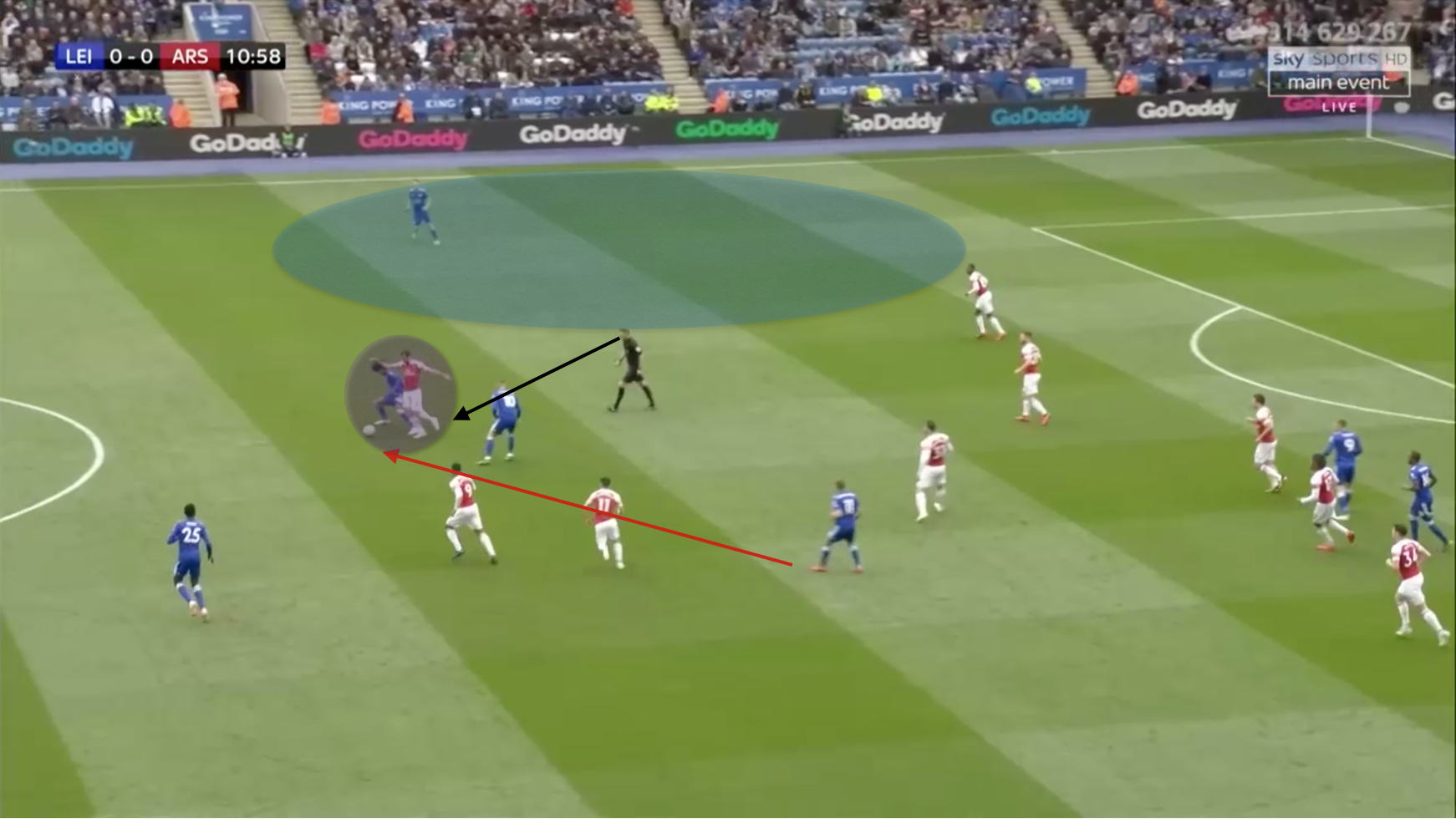 The inconsistency of this press, though, meant that nobody was ever really prepared to follow through on it. While Mkhitaryan has successfully forced Choudhury off the ball, Leicester are able to easily pick it up again. And now, there is space on the wing in the area Mkhitaryan was occupying before his move to press.

Arsenal’s passiveness only worsened during the second half, although this was somewhat inevitable after the red card. Emery shifted his side into a 4-3-2 formation. His decision to leave two strikers up top ultimately played into Leicester’s hands. 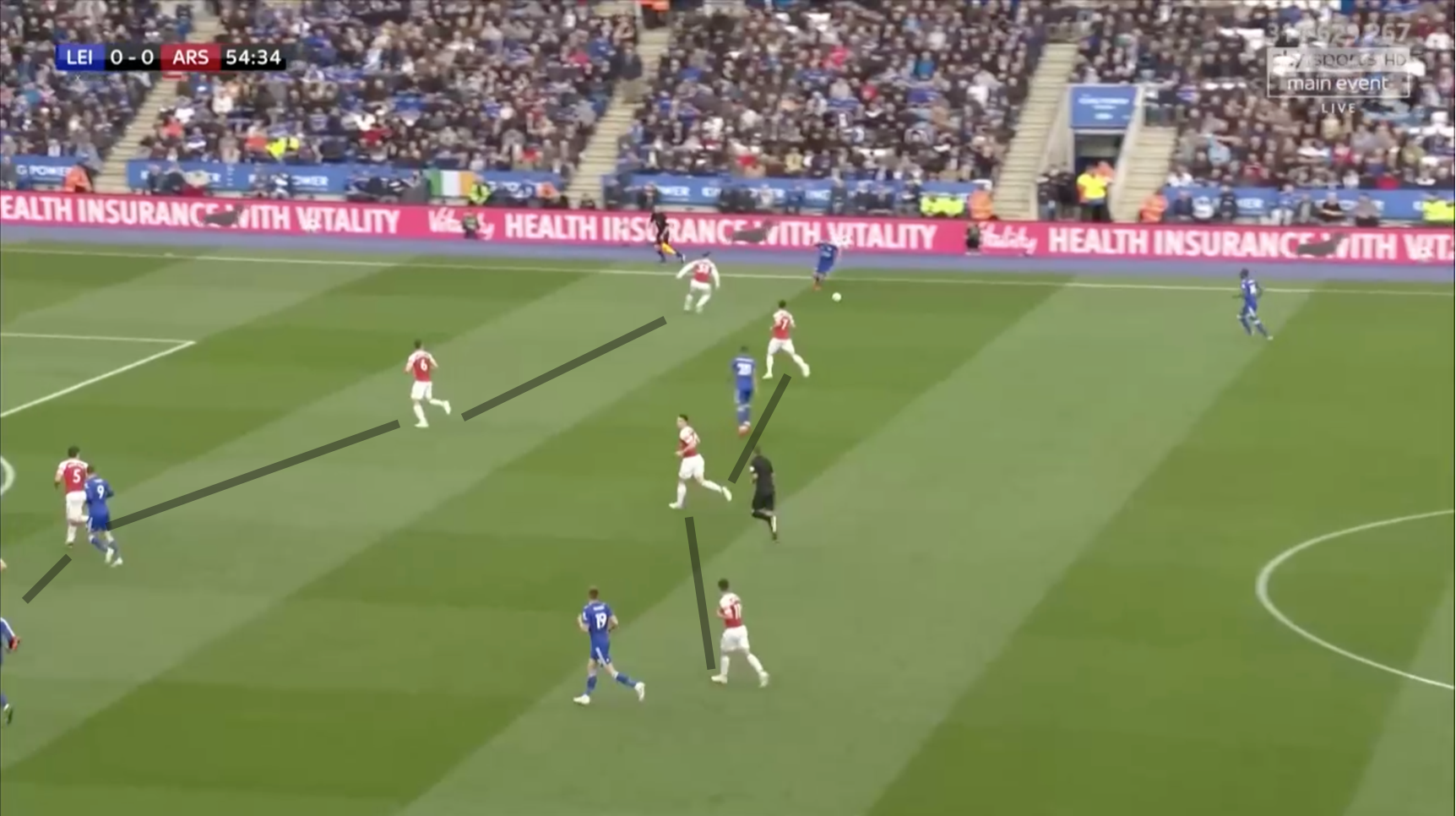 With the Foxes focusing on width, as we have already discussed, Emery’s decision to play this way in the second half seems like it was definitely the wrong one. The formation made it very easy for Leicester to exploit Arsenal down the flanks.

The Arsenal defence generally played a high line throughout the game. With Jamie Vardy lining up against them, it is a struggle to see the logic behind this decision. The striker is a master at playing off the shoulder of the defender, and he made the Gunners suffer on Sunday.

The image below barely needs explaining, as so many are now aware of the threat Vardy poses. A ball over the top has caught out Shkrodan Mustafi and Sokratis, who were both indecisive in their decisions to stick or twist with the run of Vardy. Mustafi holds the line while Sokratis follows the run, and they are fortunate that Vardy isn’t able to keep his shot on target. 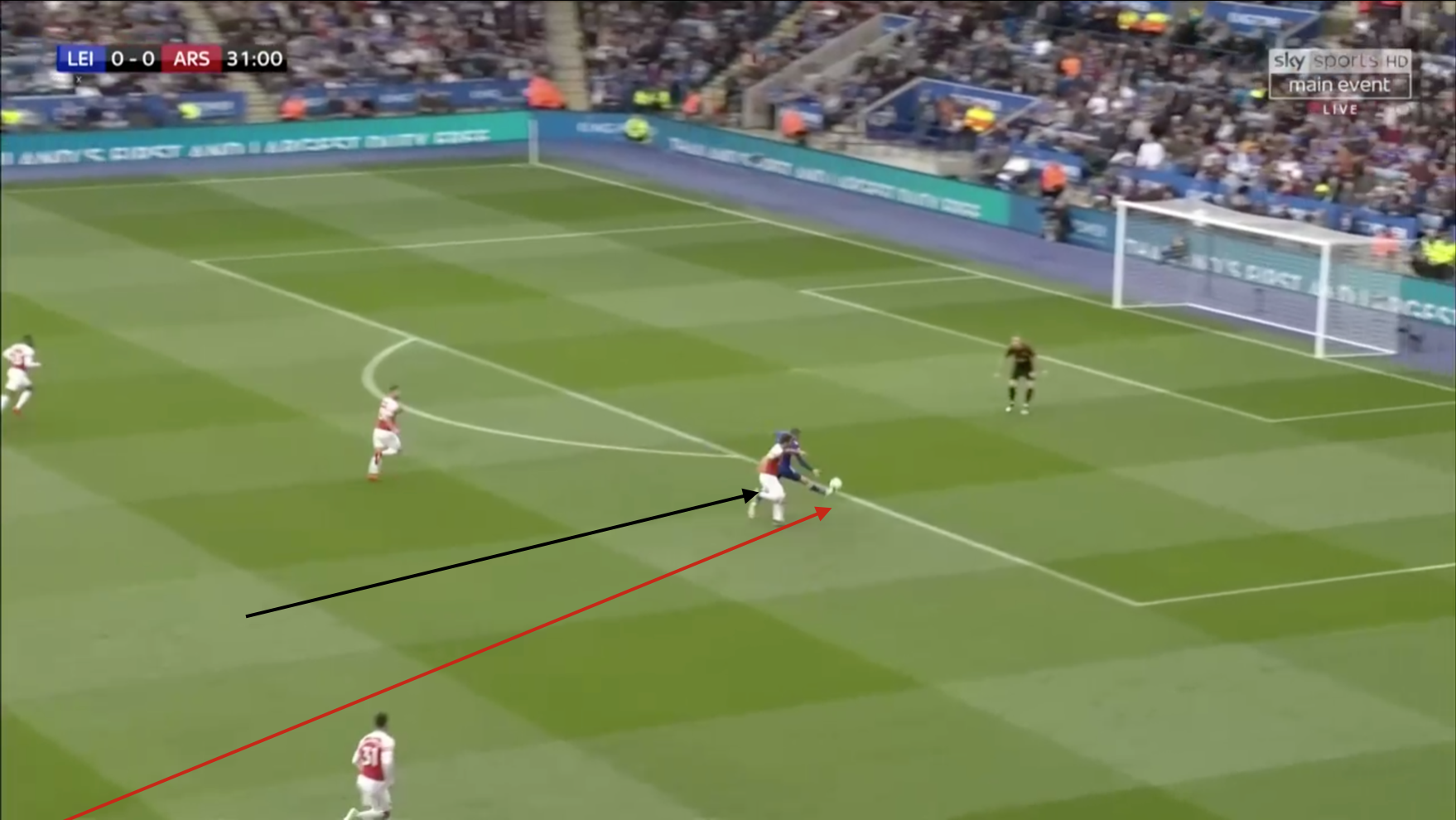 The frontman also showed adeptness at dropping deeper to terrorise the Arsenal defence. In this next example, we can see how he has come to deep to run at the defence. James Maddison is making a run into the space vacated by the defence, and Vardy plays an excellent through ball which eventually sees Maddison force a save out of Bernd Leno. 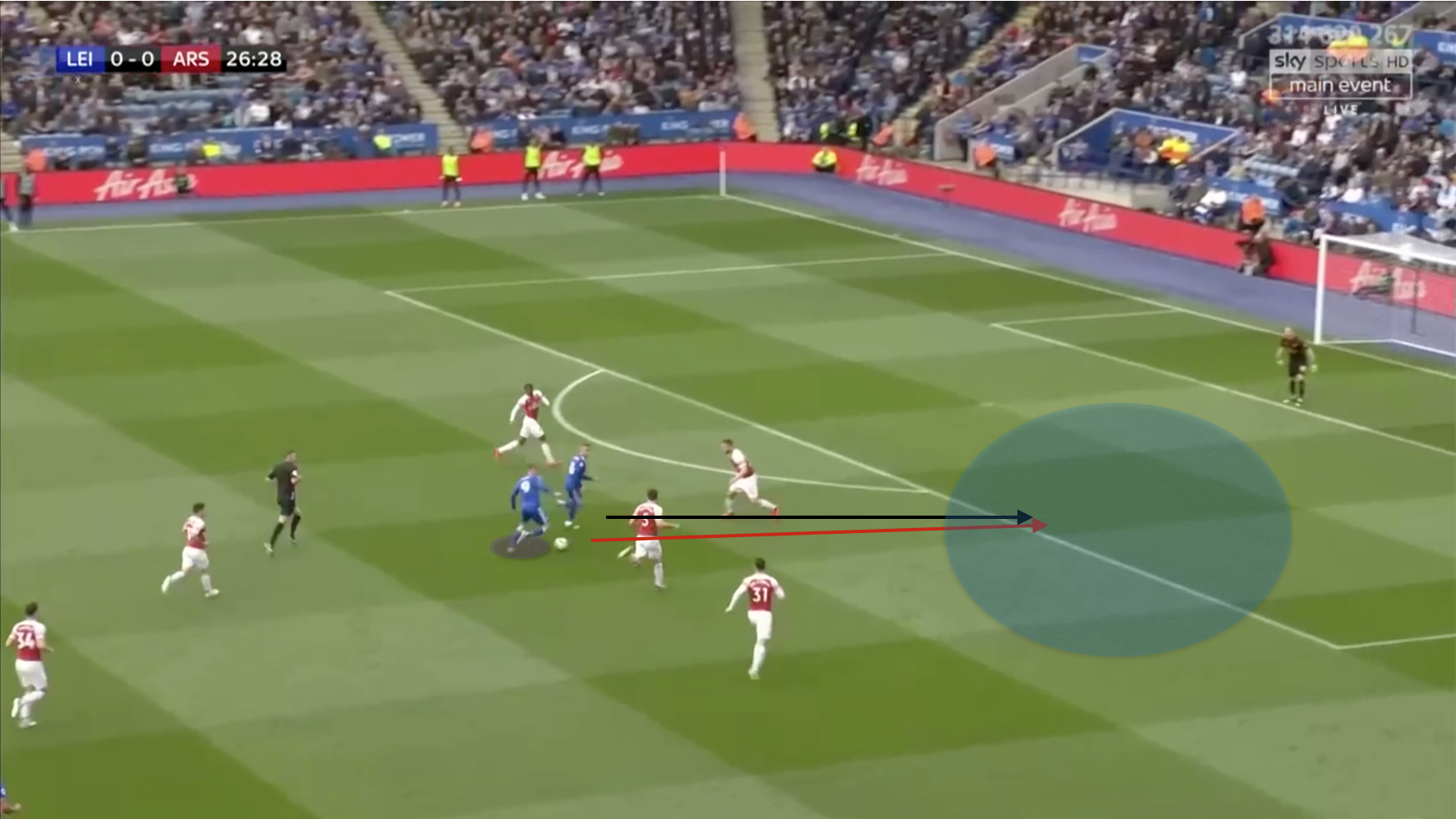 Vardy did, eventually, get the goal he deserved from a ball over the top from Kasper Schmeichel. This both showed the strengths of Vardy’s game, but also the poor handling of him from the Arsenal defence. Sokratis and Mustafi are, again, indecisive and badly positioned to handle the pace of Vardy running in between them. 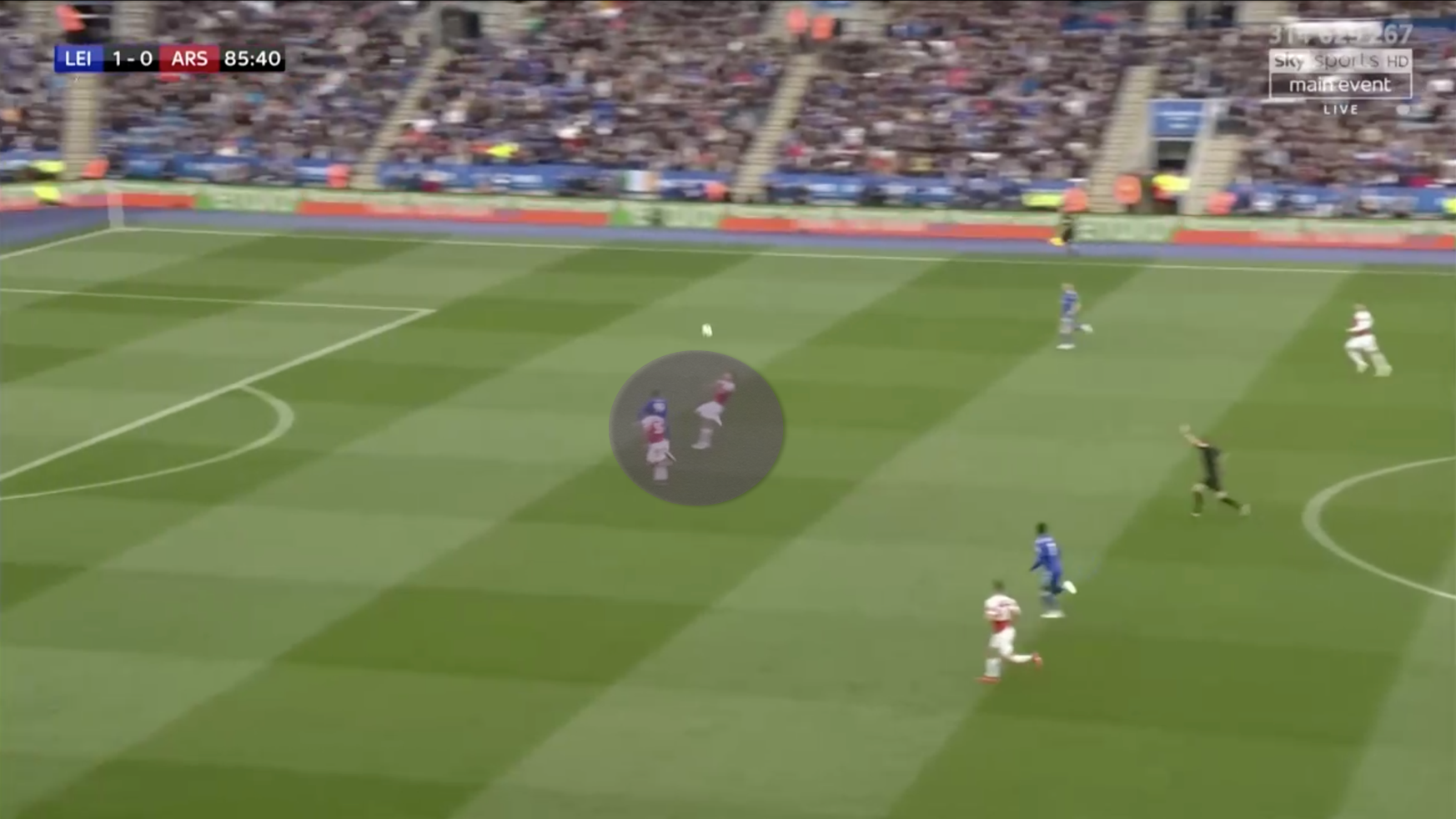 In 53 games against ‘the big six’, Vardy has scored an impressive total of 31 goals. It could well be argued that a natural tendency to push higher up the pitch from the bigger clubs plays straight into Vardy’s style.

Leicester were comfortable in their victory over Arsenal on Sunday. They dominated possession and restricted the Gunners to just a single shot on target. Their talented midfield worked extremely hard to regain possession and showed their quality with the ball as well.

Arsenal, meanwhile, seemed to lack coherence in their attempts to defend against the Foxes. While they were organised, they lacked little bite and afforded Leicester far too much time on the ball. Even when they did bite, they had few ideas of what to do afterwards and struggled to keep hold of the ball. Indeed, Leicester had 816 touches on the ball compared to Arsenal’s 489.

The Foxes can have high hopes for next season should they retain most of their players over the summer transfer window. Arsenal, however, look like in dire need of an overhaul of players.