This game was a great chance for Arsenal to get into fourth place. With a win over Wolves, they would have been able to overtake Chelsea. The fourth ranking is so important of course because it guarantees you a place in the Champions League next season. After their disappointing 3-2 defeat against Crystal Palace, everybody expected a reaction on the pitch by the Gunners.

On the other side, the team of Nuno Espírito Santo were in 11th position before this match. A top six finish is not possible anymore, but because of this win, they’re now in seventh place. That’s a great result for Wolves, especially when you consider that it’s their first Premier League season since 2011/12. This tactical analysis will show what the reasons are for the surprising 3-1 victory for Wolves against Unai Emery’s team. 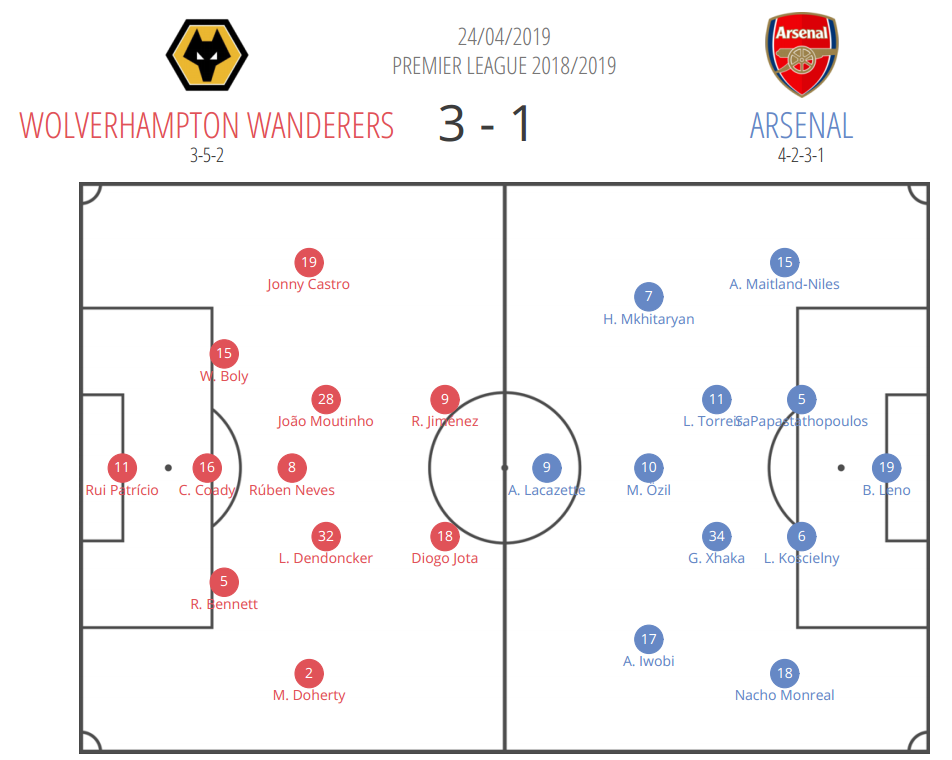 Espírito Santo lined-up his team in their usual 3-5-2 formation. Ryan Bennett, Conor Coady and Willy Boly formed the back three in front of the goalkeeper Rui Patrício. Matt Doherty and the Spaniard Jonny Castro played on the flanks. The central midfield was made up of João Moutinho, Leander Dendoncker and Rúben Neves. Diogo Jota partnered Raúl Jiménez up front.

On the other side, Bernd Leno was between the sticks and the bac -four was made of Ainsley Maitland-Niles, Sokratis, captain Laurent Koscielny and left-back Nacho Monreal. Granit Xhaka and Lucas Torreira played in defensive midfield and in front of them was the German Mesut Özil. The wide areas were occupied by Alex Iwobi and Henrikh Mkhitaryan. Alexandre Lacazette was the lone striker.

Arsenal without any chances in the first half

The first minutes of the game already showed how the first half would be. Arsenal had much more possession but without posing any danger to Wolves. The Gunners had 70.19% possession but almost no real goalscoring chances. There were several reasons for this.

Firstly, Wolves’ defending was extremely concentrated and organised. Emery’s team found no way through the 3-5-2 which turned into 5-3-2 when Arsenal were in possession. Jonny and Doherty marked Iwobi and Mkhitaryan. When Monreal or Maitland-Niles supported their wingers, Bennett and Boly helped their wing-backs. This only worked because of the good communication between the players.

The three central midfielders Moutinho, Neves and Dendoncker permanently occupied the middle of the pitch, and so there were no vertical passing lines for the Arsenal defenders. They also shifted over very well to the relevant side and stepped out to put pressure on the opposing player in possession.

Usually, Wolves just put pressure on the Gunners deep in their own half. However, in some situations, Espírito Santo’s team used high pressing. In these cases, they used man-orientated pressing as shown in the image below.

On the other hand, it should also be mentioned that the positioning of the Gunners was not good. The full-backs didn’t provide any width and Lacazette was often the only one who occupied the centre. Considering this, there were almost only horizontal passing options and so Emery’s team weren’t able to get up the pitch. In addition, they seemed spiritless and didn’t move enough to provide the player in possession with more passing options.

On the other side, Wolves had a clear plan. Beside counter-attacks and set-pieces, they also focused on long balls and especially on winning the second ball. Their first goal of the day was a free kick by Neves which was given after Monreal fouled Jonny at the end of a good counter-attack.

Jota used his pace to go past three opposing players and then passed to Jonny. The Spaniard plays on the left wing and was awarded the free kick on the edge of Arsenal’s penalty box. This shows the incredible effort Wolves put in compared to Emery’s team.

The second goal is a perfect example of the North Londoners’ lack of concentration in the first half. After a short corner, Jonny has enough time to deliver a great cross and Doherty makes it 2-0. It’s incredible to see how much space and time the Spaniard has got to cross the ball into the penalty box.

In addition, Espírito Santo had a simple plan for the build-up. Wolves tried occasionally to play out from the back, but they often played long balls. Especially Patrício played a lot of long passes to Dendoncker. The young Belgian had the job of winning aerial duels. Even when he lost them, his team mostly had possession after these long balls because of their numerical superiority.

However, they didn’t just focus on the second ball after the long passes to Dendoncker. They always tried to create numerical superiority in accordance with the space after long balls.

Emery’s changes without any improvement

Jota scored the third goal in the 45th minute after an error by Xhaka, and so the game was decided. However, Emery still wanted his team to improve in the second half. In the first minutes after the break, Arsenal showed better and particularly faster pass combinations. But after these minutes the game resembled the first 45 minutes. Wolves defended well, and Arsenal didn’t seem to have any idea how to create goalscoring chances.

In the 59th minute, the Spanish coach made some switches in personnel. He brought on Mattéo Guendouzi and Sead Kolašinac to replace Torreira and Mkhitaryan. In this light, he also changed the formation to a 3-5-2.

But these changes didn’t really lead to anything. Xhaka, Guendouzi and Özil often dropped deep. In addition, Iwobi often drifted out and so Lacazette was once more alone in the middle. Even though the wide areas were occupied by Kolašinac and Maitland-Niles, there were again not enough vertical passing lines because of the deep positioning of the midfielders.

The two great differences between the two teams were their respective wills and plans. In no period of the game did you have the sense that Arsenal had a plan to break down the defence of Espírito Santo’s team. Furthermore, Wolves played with a lot of effort and so they deserved the win.

It will be interesting to see if Arsenal can get enough points in the remaining matches to qualify for the Champions League. No matter how Wolves play in the last few matches, their season is already outstanding. With three matches to come, they are currently in seventh position.