How Wolves lost a two-goal cushion in 12 minutes

After Manchester City vs Brighton fizzled out on Saturday without much to report, it was down to Sunday’s FA Cup semi to produce the action. Thankfully, Watford and Wolves didn’t disappoint. After going into what appeared to be an unassailable two-goal lead, Wolves seemed destined to reach their first FA Cup final since 1960. That was until Gerard Deulofeu was introduced by Javi Gracia in the 66th minute.

The Spaniard scored a majestic goal to halve the deficit before Leander Dendoncker unforgivably stuck a leg out in the box in stoppage time. Naturally, Troy Deeney was only too happy to fall over the Belgian’s outstretched leg and convert the penalty to take the game to extra time. From there, there was only going to be one winner and Deulofeu coolly slotted past John Ruddy towards the end of the first half of extra time.

In this tactical analysis, we shall examine how Nuno Espírito Santo’s side went from being 12 minutes from a FA Cup final to licking their wounds. Yes, Deulofeu was an integral part of Watford’s success, but so much of it can be put down to Wolves’ big-game immaturity, which isn’t something that has been said very often this season. Onto the analysis.

From the side that beat Fulham during the week, Watford made only two changes. Ben Foster was left out, as Gracia’s cup keeper, Heurelho Gomes, started between the sticks. Andre Gray was the only other introduction to Watford’s starting lineup as he replaced the aforementioned Deulofeu.

Similar to their opponents, Wolves also changed their goalkeeper from their most recent league game. Ruddy deputised for Rui Patrício as the case has been throughout the Molineux side’s cup run. Jonny Castro was brought in for Rúben Vinagre and Romain Saïss stepped in for Ryan Bennett.

It’s a rather cliche thing to say, but a lot of people say that then when you’re 2-0 up, it’s one of the most precarious positions to be in a football match. Be that as it may, surely it’s the same as anything: it’s exactly what you make it. If, as Wolves did, you opt to sit back and invite pressure rather than going for the third, it’s going to be dangerous.

If on the other hand you carry on playing the game you play and make sensible subtitutions rather than somewhat nonsensical ones, chances are you’ll score again and well and truly put the game to bed.

Nuno’s reluctance to go for the third goal can be illustrated with two graphics. Firstly, the momentum from the game, which shows Watford taking charge after Raúl Jiménez’s stupendous effort made it 2-0 to the Black Country side.

Jiménez’ goal came midway through the second half and as is evident, Watford took control after that. Full credit has to be given to Gracia and the way he kept his side on point as it would’ve undoubtedly been easy to let heads drop after going two down.

All the same, you have to feel that the introduction of Adama Traoré at 2-0 for Wolves would’ve made a huge difference. As the story goes, Nuno waited until Watford had pulled it back to 2-2 before bringing on the speedster. That was mistake number one.

Wolves’ lack of efforts on goal

Before we delve deeper, it’s worth visiting the xG patterns for the game as they really are quite eye-opening. 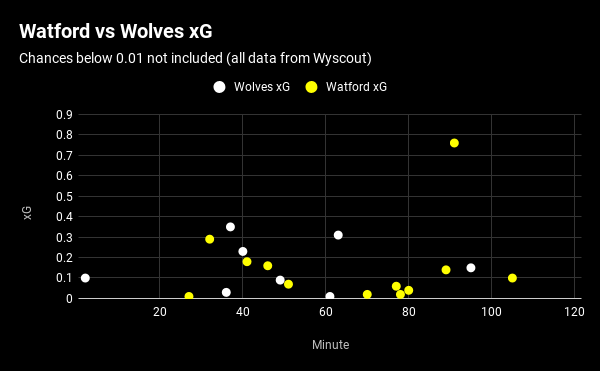 While the momentum graph only tells half a story, the xG graph tells all of it. After Wolves scored, they didn’t register a single attempt on goal until it was, quite frankly, too late. Watford had six attempts, including their two goals in the final 25 minutes of the game, one more than they managed in the previous 65 minutes. Ultimately, something changed in Wolves’ approach.

Far too many losses

On average, Wolves have lost the ball 110.79 times per game this season in competitive games. Against Watford, Wolves lost the ball a staggering 172 times, 49 times alone in their own third. See the below image.

Even though that’s rather concerning, it still doesn’t tell us the full story about Wolves’ tendency to drop deep. Recoveries, however, paint the clearest picture known to man. In the attacking third on Sunday, Wolves made just four recoveries and from those four, only one was made in the regulatory 90 minutes. Unsurprisingly, that was made in the first five minutes with the score still deadlocked.

As mentioned, this was Wolves’ only instance of recovering the ball high up the pitch in 90 minutes. To put give that some context, Watford completed 27 in the same time frame. Admittedly it could be argued that they would be pressing higher up due to chasing the game, but seven were completed with the game still at 0-0.

Understandably, some of this can be attributed to Wolves’ style of play as Nuno’s side are usually comfortable with the opposition having the ball in their own half. On the contrary, this was Wolves’ second-lowest final-third recovery rate total of the season. Only the recent game at Stamford Bridge, in which Wolves made three recoveries in the final third, is worse than the number against Watford.

Deulofeu single-handedly got Watford back into the semi-final. Not many players would’ve been brazen enough to attempt the shot he did, let alone execute it with such style. As is the case with most goals, there was something that could’ve been done in the build-up.

The throw makes it into the six-yard box. Saïss has the opportunity to win the ball in the air ahead of Deeney and get some distance on it. He misses it, the ball ricochets to Deulofeu, who is in acres of room. He takes a couple of touches to set himself before finding the top right-hand corner.

Dendoncker, Neves and Jiménez could all pick up the Hornets’ goalscorer, but they are otherwise occupied by looking at the ball and by the time they get to him, it’s too late.

From there, Nuno decided to withdraw Neves and replace him with Bennett. Essentially, it was a straight swap as Saïss shifted to the midfield trio and Bennett slotted in at right centre-back.

Morgan Gibbs-White could’ve been brought on instead of Bennett. Alternatively, Bennett could’ve just replaced Saïss. The difference Gibbs-White would’ve given the team would have been twofold. For starters, the Under-17 World Cup winner would have been a fresh pair of legs in the middle of the park and secondly, he’s a ball carrier.

With just over three minutes left of normal time, Saïss picked the ball up from Jonny and then attempted to play the ball back to the Spaniard. Possession was turned over and Watford were back in the driving seat. If the Moroccan utility man had taken a breath and considered his options, as perhaps Gibbs-White would’ve done.

As the arrows denote, if he had changed his body shape, Matt Doherty and potentially Dendoncker would’ve both been in space. Hypotheticals don’t matter now, but many Wolves fans are probably thinking what if…

Wolves’ tendency to sit back and allow Watford to attack them proved costly and then some. As Watford have now got a FA Cup final to look forward to, Wolves have now got to dust themselves down and battle it out for seventh place and a place in Europe, should City beat Watford in the final.

Next on the menu, Gracia’s side host Arsenal on Monday night, whereas Nuno takes his troops to the south coast to face Southampton.