Augsburg are currently in 15th place in the Bundesliga and four points ahead of VfB Stuttgart. Since 16th is a relegation spot in the German top flight, Augsburg are truly in the relegation battle. The 39-year-old German Manuel Baum had been the head coach of Augsburg since December 2016.

Last year they finished in a solid 12th position. That result was good for the Bavarian club, especially when you consider their meagre budget. However, this season has seen several ups and downs. With six games to go, Augsburg find themselves in the relegation battle.

On 9 April, the Augsburg directors sacked Baum and announced Martin Schmidt as the new head coach. The question is now how Schmidt will set up his team and if Augsburg can stay in the Bundesliga. This analysis will compare Baum and Schmidt, and how their teams have played in the past.

The German was born in 1979 in a small city in Bavaria called Landshut. He is 5’7” but was nevertheless a goalkeeper back in the days. He played in his youth for 1860 Munich and later in his career for eight years at Ismaning. After that, he moved to Unterföhring where he played a further two years and then ended his career in 2008.

He started his career as a coach in 2011 when he was an assistant coach at Unterhaching for one year. Between 2012 and 2013 he was joint-head coach of Unterhaching together with Claus Schromm. After that, he was the coach of the Augsburg under-23 team until December 2016 when he took over the first team. Because of the bad performances of his team this season he got sacked on 9 April after they had lost 4-0 two days earlier against Hoffenheim.

He was born in 1967 in Naters. The Swiss was active as a player from 1976 to 1998 for FC Naters and afterwards moved to FC Raron where he ended his career in 2001. Schmidt moved directly from player to assistant coach and from 2003 was head coach. In 2008 he took over the second team of FC Thun.

Two years later he became the head coach of the second team of Mainz. After five years he was promoted to take charge of the first team of Mainz in February 2015. He reached an incredible sixth place in the 2015/16 campaign in his first whole season as head coach.

However, in May 2017 he was sacked because of bad results before taking over Wolfsburg in September of the same year. He didn’t even stay one season and resigned in February 2018. After a break of more than a year, he has now taken over Augsburg with a contract until the end of the season. In addition, the contract will be automatically extended until 2021 if Augsburg can stay in the Bundesliga.

Baum’s most important players this season

There are five players in Baum’s squad who formed the backbone of the team: Rani Khedira, Daniel Baier, Philipp Max, Michael Gregoritsch and Jonathan Schmid. Khedira, the younger brother of German international Sami Khedira, played in 26 out of the 28 games either in defensive midfield or as a centre-back. Defensive midfielder Baier has missed just one game due to a yellow card suspension. The 34-year-old German is also captain.

Max is the most courted man of Augsburg because of his incredible recent seasons and his solid performances this year. During the last campaign, the left-footer assisted 32% of Augsburg’s goals. He mostly played as left-back but in some games, Baum lined him up as the left winger.

The other full-back in the team is Schmid, who moved to Augsburg in 2016. The last important player is the Austrian international Michael Gregoritsch who mostly performs as a striker or attacking midfielder. Baum rotated all the other positions a lot, partly to adjust his team to their opponents, but also to give every player enough chances to perform.

Baum preferred a 4-5-1 when the opposition were in possession. They often sat back and attacked their opponents as soon as they entered Augsburg’s half. That’s why they had on average only 46.92% possession. Because of the three players in central midfield, the distances between the players were short and the two lines were close to each other. In light of this, there were almost no passing options through the middle for opponents.

Because of that, they forced the opponents into the wide areas where they pressed in at them. The striker was mostly positioned like in the image below. The pass into the middle isn’t possible because of his positioning. Considering this, the opponents must either play onto the wing where Augsburg can put pressure on the receiver, or play back. For now, there is no danger for the defence.

To maximise the chance of winning the ball, they try to create numerical superiority on the wing. The central midfielder or the near-side centre-back shifts over and supports the winger and the full-back. With that in mind, they create a numerical superiority that makes it easier to win back the ball.

Depending on the opposition, there were sometimes some slight differences compared to the 4-5-1. For example, against Dortmund, the right winger André Hahn often dropped next to the right-back Schmid to create a 5-4-1. That was because Dortmund had a lot of players in high positions and so only Thomas Delaney was in the midfield. Considering this, Hahn was more needed in the last line of defence.

Baum’s team also used situational high pressing. Mainly they pressed their opponents when there was a bad pass or bad first touch. When this happened, they used a man-orientated press as shown in the image below.

Augsburg in possession this season

Augsburg used an asymmetric formation when they built from the back. One full-back shifted up to a higher line while the other one stayed behind to create a back three. The defensive midfielder, usually Baier, stayed deep to give the three defenders a short passing option. 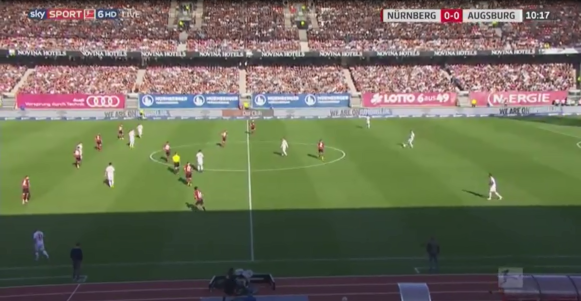 But because of the high positioning of the players, Baier and the three defenders never had enough short passing options. Because of that, they used to play a lot of long balls, which often didn’t find their teammates. Their pass accuracy of 79.2% this season reflects that.

As soon as they reached the final third, they crossed very often. Augsburg have crossed  on average 16.37 times per game this season. With crossers like Max or Schmid and players who are strong in the air like Gregoritsch, Alfreð Finnbogason or Dong-won Ji, this number of crosses is logical. They always tried to occupy the box with at least two or three players to have enough receivers.

They defended similar to Baum’s squad this year with a back four and five players in midfield. The only difference is that back then Mainz defended in a 4-4-1-1 formation and not in a 4-5-1 like Augsburg this season.

They also tried to force their opponents to play out into the wide areas where they could put pressure on them. In some situations, the attacking midfielder was positioned next to the striker to create a 4-4-2 formation when the opposition was on the ball.

They also often sat back and just attacked their opponents when they entered Mainz’s half. They had on average just 46.31% possession in the 2015/16 season. Considering this, their opponents pushed up and positioned themselves high so there was a lot of space for counter-attacks.

They also pressed their opponents high up the pitch at times. Mainly they pressed when there was a bad pass or bad first touch by an opposing defender. In these scenarios, they mainly used their 4-4-2 formation.

Their greatest weapon back then was their counter-attacks. They had on average 4.06 counter-attacks per game. As soon as they won the ball with the aid of their two narrow banks of four, they tried to play the first pass forward.

In the image below Gaëtan Bussmann intercepts the ball and plays it forward first time to Julian Baumgartlinger. Because of that, the counter-attack starts immediately. In addition, their fast players like Jairo Samperio, Jhon Córdoba or Christian Clemens were perfect for counter-attacks. 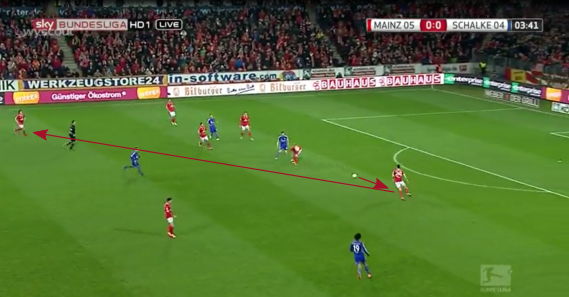 In the build-up, the two central midfielders, as well as the full-backs, stayed deep to give the centre-backs enough short passing options. The attacking midfielder tried to move between the lines of the opponents and to occupy free spaces.

Once they got into the wide areas the wingers were versatile. They were capable of going into one-on-one situations against the opposing full-back or crossing the ball into the middle. In these situations, one central midfielder pushed up to provide additional options.

Schmidt’s men defended similarly to Baum’s Augsburg defence this season. Both used a back four and one lone striker. The only slight difference is the positioning of one player in midfield. Augsburg have played with three central midfielders this season while before Mainz used two central midfielders and one attacking midfielder a bit further up the pitch.

But there is still a huge difference. Augsburg have already conceded 54 goals in 28 games while Schmidt’s men conceded 42 goals during the whole season. These statistics show that even when the system is the same, self-confidence and organisation are central. These two aspects were almost perfect at Mainz back when Schmidt was the head coach. However, Augsburg’s players have often looked low on confidence this season and the lack of communication has been a reason for their bad organisation.

Another clear difference is the style of build-up. Augsburg have used a lot of long balls this season because the only short passing option was Baier most of the time. On the other hand, the midfielders of Schmidt’s Mainz came deep to provide at least two passing options. In addition, the full-backs stayed deep to have enough players available. Augsburg’s Max and Schmid often pushed up very early to receive long balls.

Schmidt’s greatest task will be to stabilise the defence and add more attacking concepts other than crosses. It will be interesting to see if he will focus on counter-attacks like he did at Mainz. However, it is also possible that he will stick to Baum’s system and try to give them back their self-confidence.

In any case, the last match days of the Bundesliga will be thrilling. If Schmidt’s squad is able to avoid relegation, the Swiss coach has got enough time during the summer break to set up the team for the new season how he wants them to play.