Juventus are one of the favourites to claim the Champions League trophy and they demonstrated their credentials in the 1-1 draw at Ajax. The Dutch side impressed once again in Europe, but Juventus looked really solid and brought a good result back to Turin. This tactical analysis will look at Ajax’s pressing, Juventus‘ defensive flexibility and how Juventus exposed Ajax’s man-marking to score the crucial away goal. 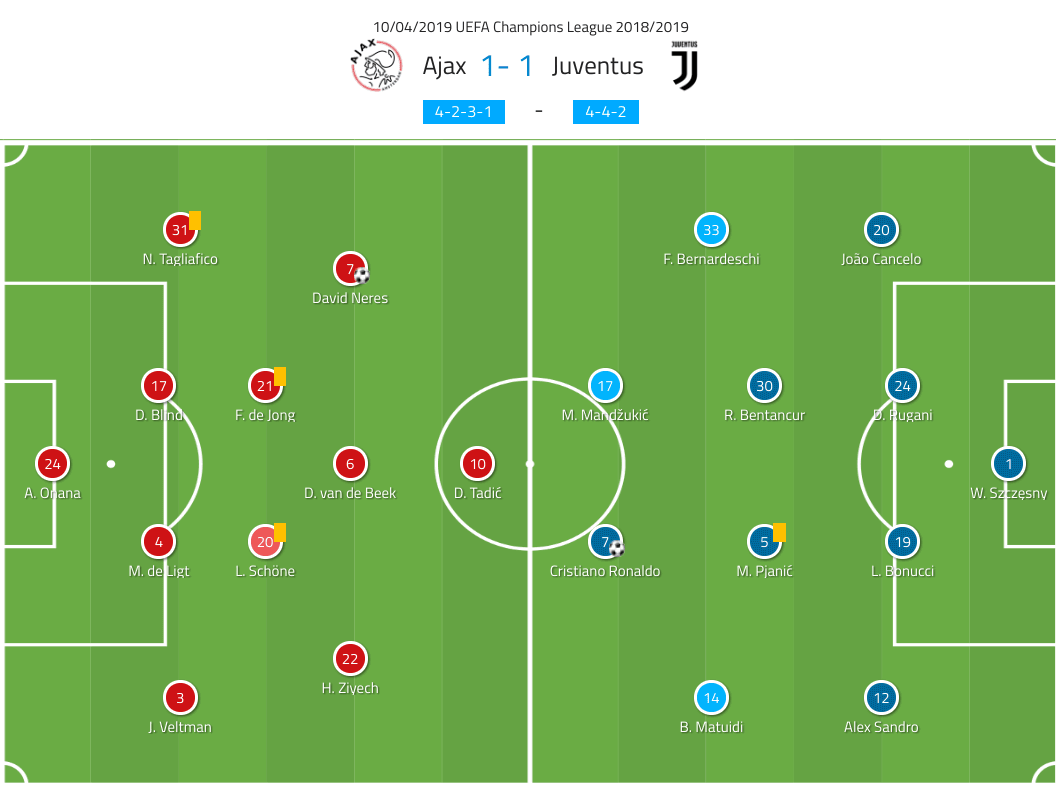 Ajax set up with virtually the same team that defeated Real Madrid at the Bernabéu with the only change being Joël Veltman at right-back rather than Noussair Mazraoui. Max Allegri chose an expected side for Juventus with Giorgio Chiellini the only main absentee. He was replaced by Daniele Rugani.

Ajax were extremely aggressive in their defending against Real Madrid in the previous round and continued in the same vein here. When Juventus looked to build from the back, Ajax would man-mark Juve’s midfielders and push up against the centre-backs too. The below image highlights this approach.

The position of Neres (yellow) is interesting. Rather than marking João Cancelo, he encourages Rugani to play that pass. This is due to Ajax wanting to stop Juve from breaking through centrally and force them into the wide areas instead. 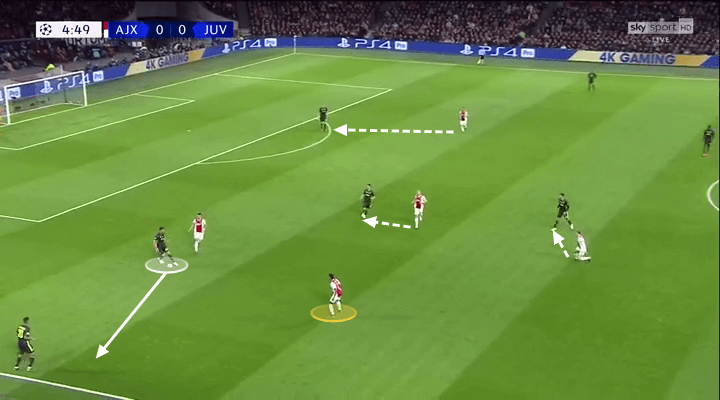 The image below is another example of Ajax’s man-marking. Dušan Tadić presses Leonardo Bonucci and David Neres is ready to press Rugani on Ajax’s left-side. Lasse Schöne and Donny van de Beek mark Miralem Pjanić and Blaise Matuidi in midfield.

This man-orientated approach caused Juventus a lot of problems. With Chiellini missing, Juve lacked a left-footed centre-back which restricted their ability to break the press since Bonucci would always turn inside onto his right foot and thus lessen his ability to access the entire pitch with his passing. 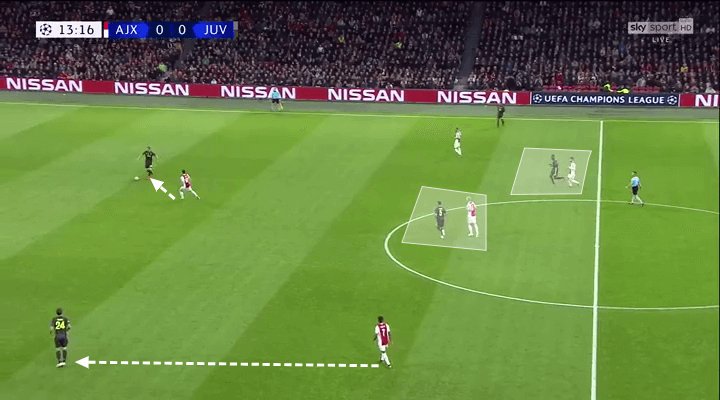 The image below is an example of all three Ajax midfielders marking Juventus’ midfield three. We see Bonucci stepping out with the ball but with him being right-footed this didn’t create the trouble for Ajax that Chiellini stepping out in that manner would have. 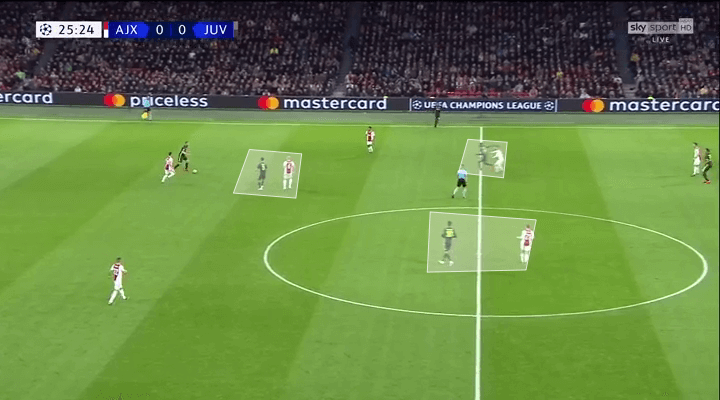 Ajax committed a lot of players forward when pressing and this came with its risks. As Juventus often went long from Wojciech Szczęsny, Ajax could often find themselves defending in numerical disadvantages.

One such example is the scene below as Alex Sandro beats Veltman in the air and Juventus then attack three on two. This is one area Juve should have done better in as there were some really good counter-attacking opportunities that they didn’t take. 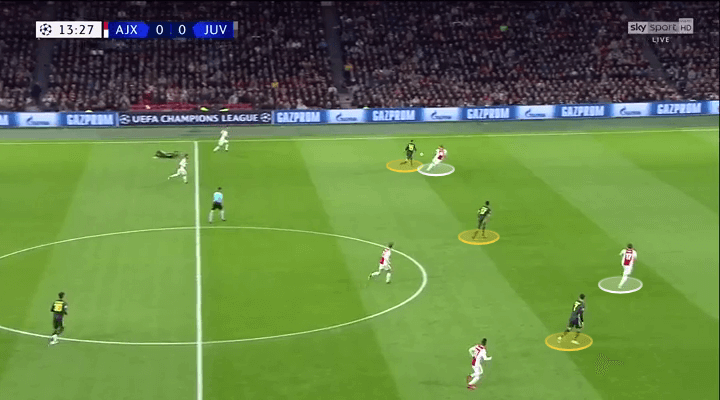 The pressing forced Juve to struggle and allowed Ajax to see more of the ball, especially in the first 65 minutes of the game.

Juventus are extremely flexible defensively under Allegri and they showcased a few reasons why in Amsterdam. First of all, when defending around the halfway line in a mid-block, they would often set up as seen below with a 4-3-3. The focus then was to remain tight in central areas and force the ball into the wide spaces. 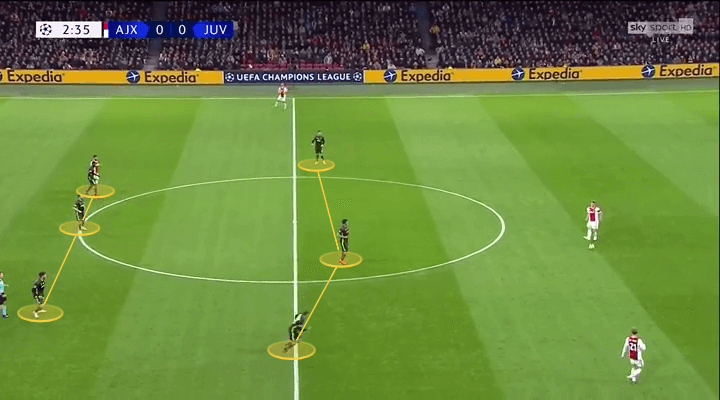 Secondly, when pressing high, Juventus adopted a man-orientated pressing scheme similar to Ajax’s but not as aggressive. The image below highlights Frenkie de Jong on the ball pressed by Pjanić.

Cristiano Ronaldo and Federico Bernardeschi mark each centre-back while the full-backs are left free. De Jong tries to find Veltman but Matuidi (yellow) intercepts the pass. This approach actually made Ajax go long on a lot of occasions which Juve’s back-four easily dealt with. 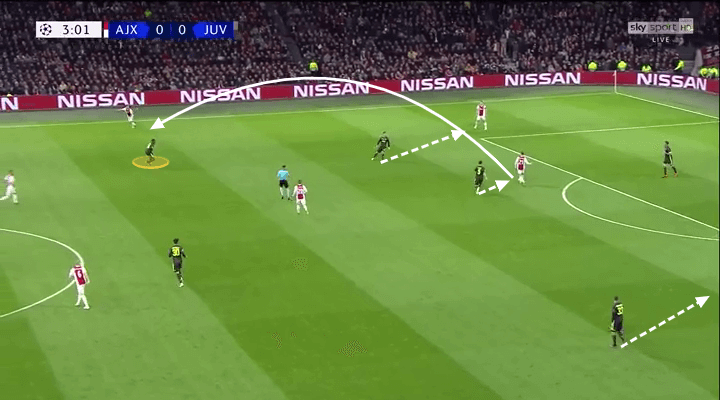 When Ajax managed to get to Juve’s defensive third with the ball under control, however, Juve would adopt a very compact and positionally-orientated 4-4-2/4-4-1-1 with Bernardeschi and Matuidi as the wide midfielders. Look at that shape. There are no spaces between the lines of defence and midfield. 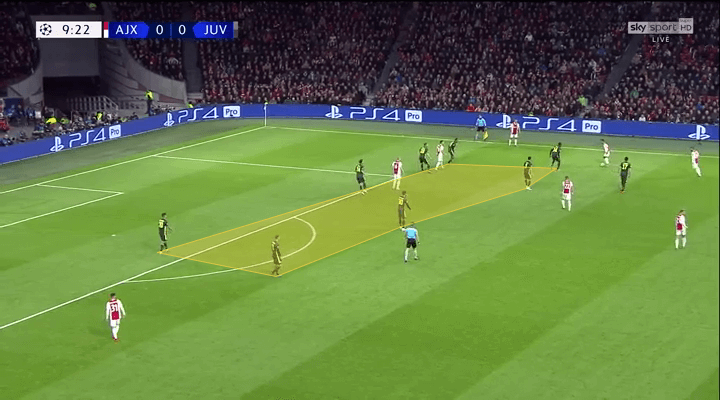 Juve’s impressive compactness led to Ajax very rarely threatening with the ball within Juve’s defensive structure. So despite all of their possession, Ajax mostly had the ball outside Juve’s shape which is exactly what Allegri would have wanted. Don’t be fooled by Ajax having the ball; Juve, to some extent, allowed them to have it.

There were occasions, though, when Ajax managed to break through Juve’s midfield block and get players facing forward between the lines. Usually, these situations were created by lay-offs from the highest positioned player. Below, De Jong finds Hakim Ziyech who instantly lays it off to Van de Beek. 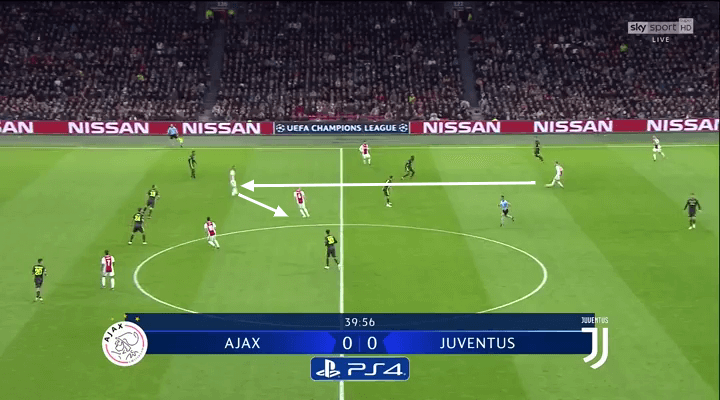 This image below is another example when Schöne finds Van de Beek who lays it off to Neres. The Brazilian then sprays it wide to the galloping left-back Nicolás Tagliafico. 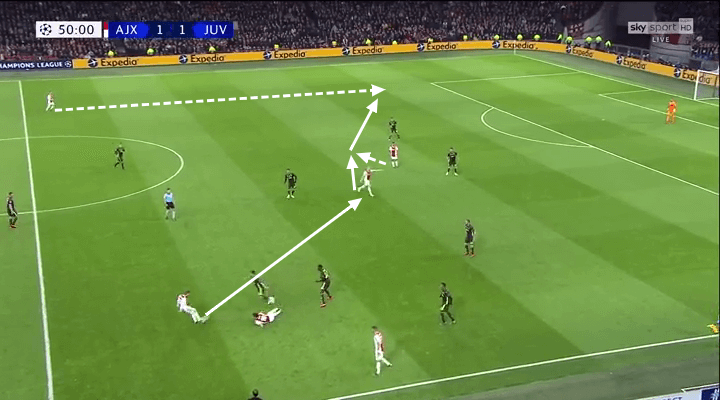 Ajax had some bright moments in possession but Juventus controlled most of the game. In the last 25 minutes, Allegri brought on Douglas Costa and Paulo Dybala in two attacking changes that wrested the initiative over to Juve who went on to control the latter part of the game by having the ball.

There had been warning signs to Juventus exposing Ajax’s man-marking previously but it was never more obvious than when Ronaldo made it 1-0 to the Italians. Let’s go through the situation and see how it could have been prevented.

In the build-up to the goal, Ronaldo has dropped off the front to receive the ball. Daley Blind, as expected in their man-orientated defence, stepped up to press him as illustrated below. This meant he left a huge space at the heart of defence. Ronaldo plays the ball wide to Cancelo. 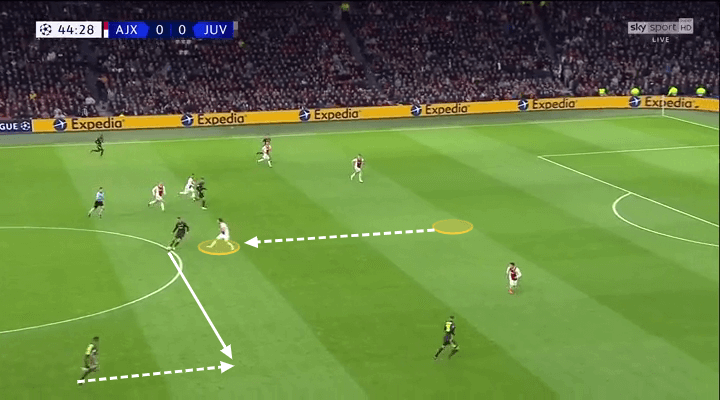 As Cancelo has now advanced forward he prepares to cross the ball. Blind (yellow) has been attracted to the ball and has let go of Ronaldo (white). Rodrigo Bentancur has reacted to the huge space centrally and made a run that Matthijs de Ligt picks up. The dangerous space is now behind De Ligt. Veltman (black) could have blocked this space but continues to mark Mario Mandžukić instead. 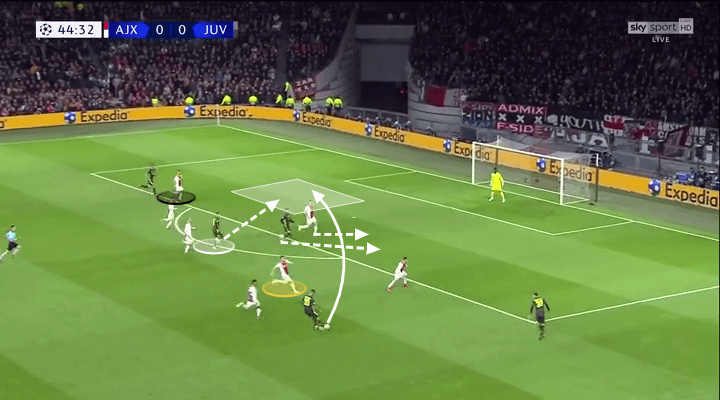 The final image highlights the space Ronaldo has as the cross reaches him. It might seem startling, but this is a risk you take when defending in this way and you don’t do it well enough. 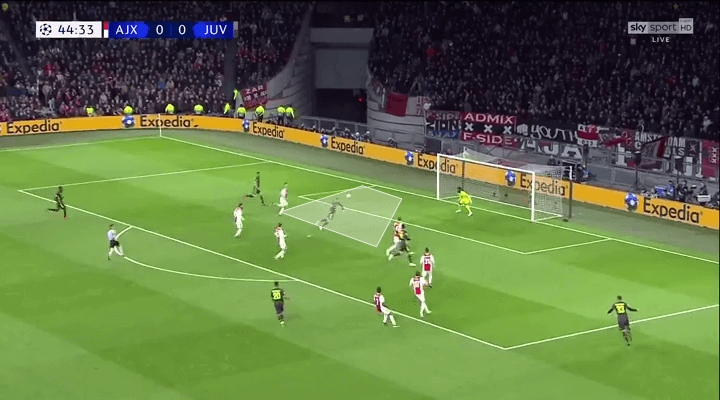 How then, could this goal have been avoided? Firstly, Blind could have followed Ronaldo’s run as he should have done. Truthfully though, he would have struggled to keep up with Ronaldo’s run. Secondly, De Ligt could have prioritised the space and stayed in between Bentancur and Ronaldo to give himself the chance of defending both possible passes from Cancelo.

Thirdly, Veltman could have focused on covering the space rather than his man as Mandžukić was still outside of him. Before this situation even occurred, Blind could have stayed in the back four rather than following Ronaldo so deep. Despite their bravery, the Dutchmen were punished heavily.

Ajax will feel confident after another strong performance against a European giant. However, Juventus controlled this game and would probably have considered it the perfect away performance had Cancelo not made the mistake for the goal or if Costa’s shot had bounced in rather than out off the post. Ajax can definitely go to Turin and score, but the sense is that Juve will better them and go through to the semi-final.