Manchester City put in a dominant display to pressure-cook a Manchester United side into more turmoil. City controlled the game and United were able to keep them at bay until the second half, but eventually Manchester City’s dominance paid off and they were justly rewarded.

David Silva and Fernandinho shone for Manchester City, with them both displaying the kind of pocket play and tactical nous that they and Guardiola’s teams have become notorious for. In this tactical analysis, we will look at how United managed to hold out initially and why Manchester City dominated United both in and out of possession, in large parts thanks to the brilliance of David Silva.

Manchester United lined up in a 5-3-2 formation, making several changes after the embarrassing defeat to Everton at the weekend. It was clear to see from the lineups that United would look to use the pace of Rashford on the counter attack, regardless of Solskjær’s comments on Guardiola’s tactical fouls.

This formation initially worked well against City, as I will explain in more detail later on. City lined up in a familiar 4-3-3, which when out of possession became more of a 4-2-3-1, with David Silva stepping out and becoming a pressing player. 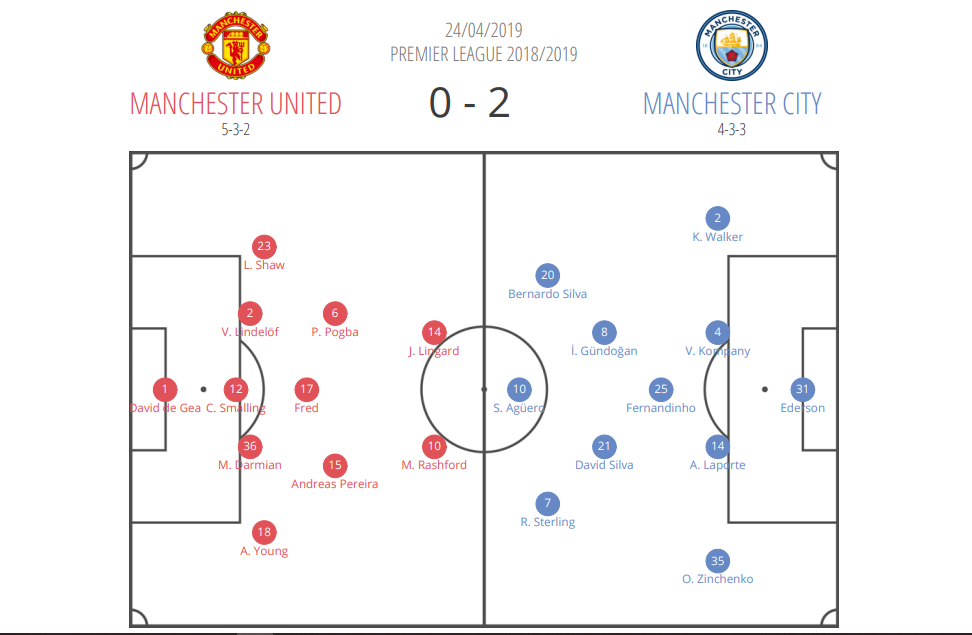 The most effective part of City’s play out of possession was to be found in David Silva’s pressing inside United’s half. When United looked to play from the back City’s 4-1-2-3, which we can see below would become more of a 4-2-3-1 as stated, left David Silva as an almost roaming pressing player. While the two wingers and striker pressed the back line, Silva could wait in the space behind and press the midfield player who had dropped into the space to build play. We can see a few examples of this below.

Here, we can see Fred has dropped to receive the ball from United’s backline. Bernardo Silva presses the carrier of the ball, while David Silva follows Fred and aggressively presses him if he receives the ball. We can also see Gündoğan and Fernandinho operating together and completing the press. City’s full-backs also moved up and looked to prevent United’s wide central midfield players from receiving the ball, which left Fred isolated and made him much easier to press.

In the example below, we can again see Silva tracking the midfield player looking to build up play, while the front three occupy United’s back three and look to cut the passing lanes to the wing-backs. United failed to adapt to this situation throughout the game, and failed to recognise that they needed to create an overload around Silva in order to beat the press.

Here, if Pereira makes a movement either side of Fred towards Silva, he could be of help in the attack. Instead, Pereira drops away from Fred and offers him no help, again leaving him isolated.

As mentioned, United’s back five gave them some success in the match until individual errors starting to set in. United were able to prevent City from creating many chances initially because they were able to eliminate a key part of City’s play: switching the ball. City were excellent at switching play in their recent game against Crystal Palace, who used a four-at-the-back formation, so why did United’s five have success early in the game?

They found success as they simply had more bodies within the defensive unit, therefore could cover a larger area with their players. This meant that when City’s shape in build-up play expanded to stretch the defence and create space, United were not as stretched and were able to occupy all key areas without becoming too open.

We can see below in City’s game at Palace that because they had four players along their defensive line, to remain compact in the central areas all players had to remain narrow and shuffle across to the side the ball was on. This allowed players like Sterling to exploit the space in wide areas and look for switches in play.

However, against United in the first half, because United had an extra central player compared to Palace, we can see below that the wing-backs did not have to take up as narrow positions as Palace’s did, and so Sterling struggled to find space out wide. This lead to City starting to look to combine more centrally.

City employed their usual system to look to create space to combine in. Their full-backs remained narrow in possession in order to create space in the wide areas for the wingers, which then left space for the central players to occupy. For example below, Silva pulls wide to receive the ball from a narrow Walker, which leaves space between the lines for Agüero or Gündoğan to drop between the lines and receive a pass.

Again we can see below, Sterling pulls wide and receives the ball, while Zinchenko sits narrow and can now play as a central midfielder. He is in a position to play penetrative passes but to also stop counter-attacks if needed. The width of Sterling allows the options of a pass to Zinchenko or a more difficult pass to David Silva. Due to his quality, Sterling is able to execute the latter which allows Silva to get in behind United’s midfield line.

The gulf in class between the two teams eventually showed on the night, with individual errors becoming more and more prominent as the game went on thanks to City’s sustained pressure throughout the game. United can look to blame a lack of effort from big name players, but ultimately United need to improve tactically and technically as well as improve their effort if they want to start a successful rebuild.

City, on the other hand, look back to their best after their Champions League exit. They will look to continue this form in another must-win game in the Premier League at Burnley on Sunday, which will pose a different tactical threat.