Will Dortmund’s youth be the key in Der Klassiker?

The 100th duel in the Bundesliga between Bayern Munich and Borussia Dortmund will take place this Saturday. Bayern host Dortmund who are currently top of the table with 63 points after 27 games. Bayern are in second place with 61 points.

So, this clash could be the last chance for the Bavarians to put themselves in a good position to win the league for the 29th time. On the other hand, with an away win the team of Lucien Favre would have a comfortable five-point lead. It would be the first German championship for the Swiss coach.

Dortmund having won four out of their last five games in the Bundesliga sounds amazing. The caveat, however, is that they won the last two matches in the closing minutes. Paco Alcácer scored both goals of the 2-0 victory last week against Wolfsburg in the last three minutes. Furthermore, Marco Reus scored the decisive goal two weeks ago in the game against Hertha Berlin also in the closing minutes. So while they’re currently in good form, it isn’t as impressive as at the beginning of the season when they dominated the Bundesliga.

On the other hand, Bayern have also won four out of their last five league games. In these five matches, they scored a tremendous 19 goals and conceded just three. Before the last matchday, both teams had the same amount of points, but Bayern drew last weekend against Freiburg. However, the Bavarians won 5-4 in the quarter-final of the DFB Pokal on Wednesday against Heidenheim.

Both teams are currently in great form. The 100th duel between the two best German teams of the last decade will be at a high level.

The match between the two sides during the first half of the campaign took place on 10 November 2018. Manuel Neuer, Achraf Hakimi and Łukasz Piszczek started in this match, but they won’t be able to play this Saturday due to injuries.

Both teams lined up in a 4-4-2. Since then Dortmund have preferred a 4-2-3-1 which often turns into a 4-4-2 when the attacking midfielder shifts up next to the striker. Bayern usually play with a mixture of a 4-4-2 and a 4-3-3 with Thomas Müller either on the wing or next to Robert Lewandowski. 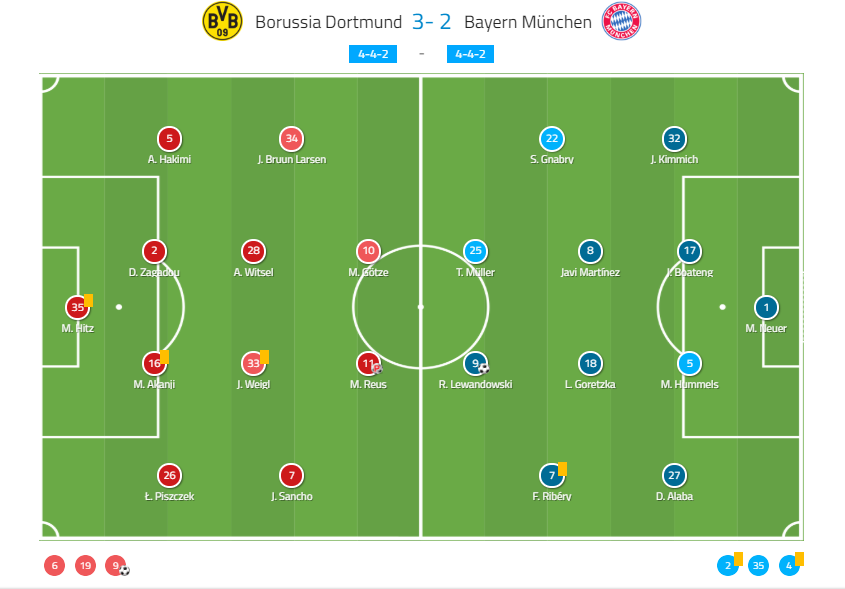 However, even though the formations were the same, the ideas of the two coaches were totally different. Bayern tried to press extremely high up the pitch. This was especially true of David Alaba and Leon Goretzka on the left side as they put pressure on their opponents very early.

Because of that, Dortmund lost the ball several times during the buildup. Just 80% of their passes found a teammate, but you must consider that the pressing of Bayern was well executed.

On the other hand, Dortmund sat back and let Nico Kovač’s team attack. They lined up in a narrow 4-4-2 with Mario Götze and Marco Reus up front. The two Germans mostly attacked their opponents as soon as they entered Dortmund’s half. Because of that defensive style of play, Bayern enjoyed 57% possession.

Because of the deep positioning of Dortmund’s players, the whole Bayern team pushed up high when they were in possession. As soon as Dortmund won back the ball, they tried to start a counter-attack and exploit the high positioning of the Bavarians. However, due to bad decision making and the lack of space for Götze, the counter-attacks weren’t successful in the first half.

So, Bayern led 1-0 when the half-time whistle blew. However, Favre made some adjustments during half time and the first 15 minutes of the second half to turn around the game.

The coach of Dortmund brought on Mahmoud Dahoud for the disappointing Julian Weigl at half time. Weigl was never really in the game and lost the ball too often due to the pressing of Bayern. With Dahoud on the pitch, Dortmund got more control of the midfield, and so of the game.

Götze is a great player on the ball but because of his lack of pace, he’s not the perfect player for counter-attacks. Because of this, Paco Alcácer replaced him in the 59th minute. The Spaniard is noticeable quicker than Götze and Favre hoped that Alcácer could finish one counter-attack with the aid of his pace.

When the substitution happened, Bayern were 2-1 in front. Reus scored  an incredible goal in the 67th minute to equalise and the Spaniard Alcácer made it 3-2 after a counter-attack. So, thanks to the changes made by Favre, Dortmund were able to defeat Bayern.

What can we expect from the second clash?

Bayern have had an average possession of 64.52% this season. They need to win to keep their title chances alive, so Kovač’s team will try to dominate the game. On the other hand, Dortmund have had on average 4.02 counter-attacks per game, while Bayern have had 3.07. In addition, Dortmund has got several fast players like Reus, Jadon Sancho and Alcácer.

You can expect that the game will be similar to the first half of the last meeting of the two teams. Bayern will attack and try to score as early as possible. However, Dortmund will sit back and use the speed of their players for counter-attacks.

In addition, Bayern will try to put pressure on Dortmund high up the pitch. They did so in the first meeting this season and showed it in their recent games too. In their 4-4-2 formation with Robert Lewandowski and Thomas Müller up front they also pressed aggressively at Heidenheim last Wednesday in the quarter-final of the DFB Pokal.

It will be interesting to see how the young defence of Dortmund will perform. Because of the injuries to the full-backs Hakimi and Piszczek, the back-four in recent matches has been slightly different. Abdou Diallo and Dan-Axel Zagadou have played as centre-backs. Manuel Akanji, normally a centre-back, has filled in at left-back, and the right-back Marius Wolf is normally a winger. These four have an average age of 21.75 years.

Furthermore, one decisive duel could be Sancho against Alaba or Joshua Kimmich on the wing. Sancho is currently one of the best players of the Bundesliga and has already assisted 13 times this season. At 19 years old he is already one of Dortmund’s key players. Whether he plays on the right or on the left wing, he is very dangerous.

On the other side, Alaba and Kimmich are both among the best full-backs in the world. If Sancho plays on the right wing, he could take advantage of Alaba’s attacking style of play. When the Austrian pushes up as he is used to doing, there is a lot of space behind him that Sancho and Dortmund could exploit through counter-attacks.

Matches between Bayern and Dortmund are always special. However, this time it’s not just about the prestige, but rather about the title. Bayern need to win to retain their chances. With six games to come after this matchday, this could be the last chance for Kovač’s men.

Bayern will put pressure on Dortmund’s young back four to cause errors. In addition, they’ll try to dominate the game while Dortmund will hope for good counter-attacking opportunities. Due to these aspects and since both teams are in good form, it promises to be a game with high quality and intensity.