After having started the season in a rough manner, Malmo, the most successful side in the history of Allsvenskan and defending champions, are in sixth place and are five points away from the top. There have been some very good performers for them despite their mixed bag season. One such performer is Veljko Birmancevic, the left-wing forward.

The 24-year-old has had a very good start to the season and has continued to impress in the side after a very good debut season. This scout report in the form of a tactical analysis discusses the strengths and weakness of Birmancevic both in the attack as well as in defence and states how he contributes to the tactics and playing style of Malmo. Let’s begin the analysis.

Birmancevic is a left-winger, who has mostly played in that flank for his club. We can see the dense regions on the left-flank in the below image which are the regions where he has mainly made his actions. 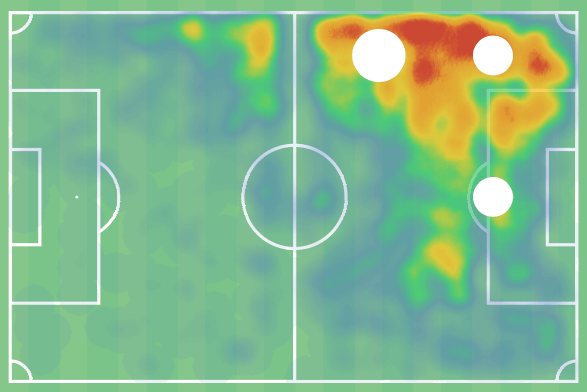 He has also been used as a centre-forward by his manager this season which is due to his ability to make good runs off the ball which we will be discussing later in detail in the report.

In Possession of the ball

As he mostly plays on the left flank and his team dominates the ball a lot more than most of the team, he mostly receives the ball on the flank when they have settled possession which means that he can receive the ball with his right foot, his slightly stronger foot as well.

He also takes shots with both his left and right foot and generates a good amount of power with both of them. On average he records 3.39 shots per 90 with an average xG of 0.37 per game as well. In the below example we can see him shooting with his left foot, which is his weaker foot when compared to the other one, to score a goal. He also aimed the shot to the bottom left corner which is very difficult for the keeper to make the save as the reflex needs to be very pitch perfect to have a decent chance to save it due to the power of the shot as well.

He is very good at placing his shots with both of his feet and consistently hits both the top as well as the bottom corner as well. The above example saw him use the inner side of his foot to take a shot that would curve from in to out for the goalkeeper.

In the below image, we can see him use the outside of his foot technique which curves the ball from the out to in and helps him score a goal even though a traditional right-footed player would score with his inner sole.

This also makes it very difficult for the opposition defenders and keepers to select their saving stances as his unpredictability in the technique he chooses is very effective. The above example also shows that he chooses to take shots at the very right moment as well. He knows that he is very far from the goal line but sees the keeper has come out of his line which means that he has the advantage of taking shots with high power that would beat the keeper instantly and would result in a goal.

This decision-making in terms of taking a shot is one of his very important assets and something that he gets really well. He does the same with his passes as well where he is able to use both techniques in both of his feet to complete passes or even create chances for his teammates.

In this example below we can see him create a chance for his teammate where he plays a brilliant outside-the-boot pass for his teammate who is making a run into the box. The weight of the pass is really good in that it makes a very good curve during its trajectory which means that none of the defenders are able to intercept it very easily.

In another example, we can see him play a cut-back pass for his teammate with his weaker left foot where he first takes and carries the ball forward before finding the right instance where he could see a passing lane being opened to play the pass that he can between the two defenders inside the box to his teammate to create a scoring opportunity.

He is also the team’s primary free-kick and penalty taker. He has a very good ability to bend the ball with his free kicks which are pretty difficult for the opposition to defend consistently. The below image shows an instance where he delivers a good corner where he rightly executes it by aiming the ball to the target and his team goes on to score a goal.

He is also pretty good with delivering crosses from the flank when his team has possession of the ball during normal play. His inswinging crosses, especially from the left-flank, are very potent and dangerous which is something that his team often relies upon to create scoring opportunities. As said before, the bend in his crosses are really good and they have angles to them which makes it very difficult for the opposition to deal with.

One such example of a cross can be seen in the image above where he delivers an inswinging cross into the box for his teammate which again creates a scoring opportunity for his team. On average he has recorded 2.77 shot-assists per 90 in the league this season with an average xA in his passes of 0.4 per 90.

He has a very good pace on the ball and can carry it well over longer distances. Although sometimes his second and third touches when he carries the ball can be a bit messy and heavy at times which leads to him losing the ball on some occasions. But in general, his carrying ability is quite reliable, especially due to his pace.

He is pretty good in 1v1 situations where he mostly looks to beat his man using his pace more than his skills or trickery. This is one of the reasons why he is able to beat his player 1v1 when already moving the ball than when he is able to from a standstill position. This means that his momentum is key to him beating a player with the player and carrying it to progress the ball upfield.

In the above example, we can see him receiving the ball wide on the flank. Initially, he is in a standstill position which means that he has zero momentum. Due to the lack of momentum he has to rely on his skills to beat the man which is something that is not very natural to him. Thus, he gets dispossessed by the opponent and he loses the ball.

But in the above example, we can see him approaching the defender and the opposition box with speed and momentum that gives him the ability and the way to change the direction in which he moves, so he is able to do it with ease and thus goes on to beat his man comfortably.

He has very good physical strength as well which he uses sometimes to shield the ball from the opponent’s defenders. This can be seen in the image above where he receives the ball and is put under pressure by the opponent. He shields the ball really well and immediately is able to beat his man and carry it forward into the box.

He usually prefers to play through passes from the interior regions, when cutting inside from the flank, for his teammates. He averages 1.07 through passes per 90 but only with a success rate of 41%. The major reason for this is the fact that he often chooses to play the wrong type of pass and, at times, his execution in these types of passes doesn’t come out really well.

For example, in the following image, he decides to chip the ball in the gap for his teammate which is basically the wrong type of pass to play as his teammate already has a marker following him and the chip pass generally is slow in reaching the marker which means that there is less speed in it so the defender can get to it in time and intercept.

His major strength as a winger/forward is his ability off the ball which is to make runs in behind the defenders. He is really good with his movement and constantly looks to trouble the opposition with his movement. He is also very good at timing his runs so that he can beat the offside trap and receive the ball from his teammates to get into scoring positions. 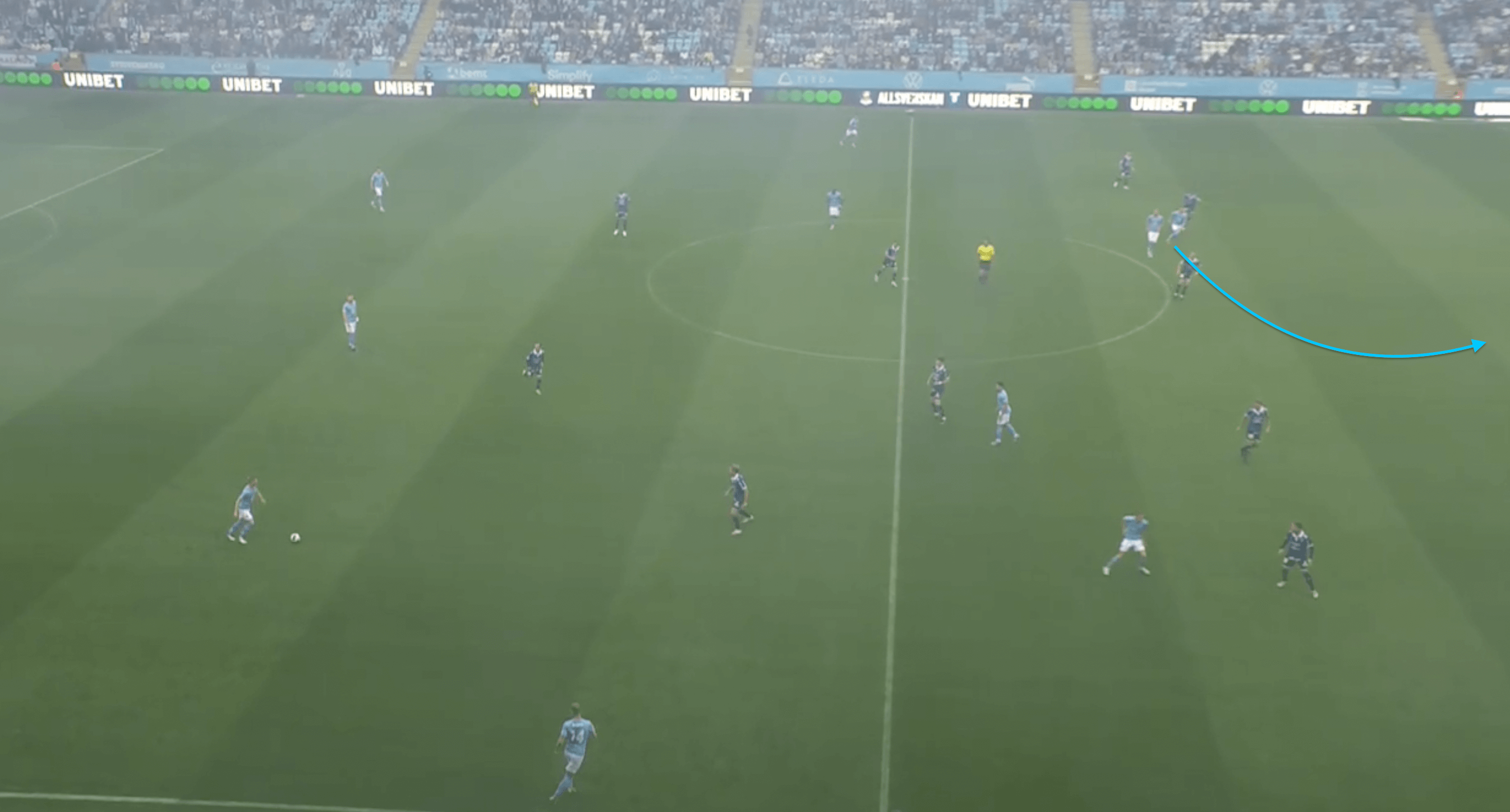 In the above example, we can see him making a well-timed curved run which he does to ensure that he beats the offside trap and receives the ball in the right zone from his teammate as well. The best thing about his runs is that he suddenly bursts to make a move that could really catch the opposition off-guard at times. 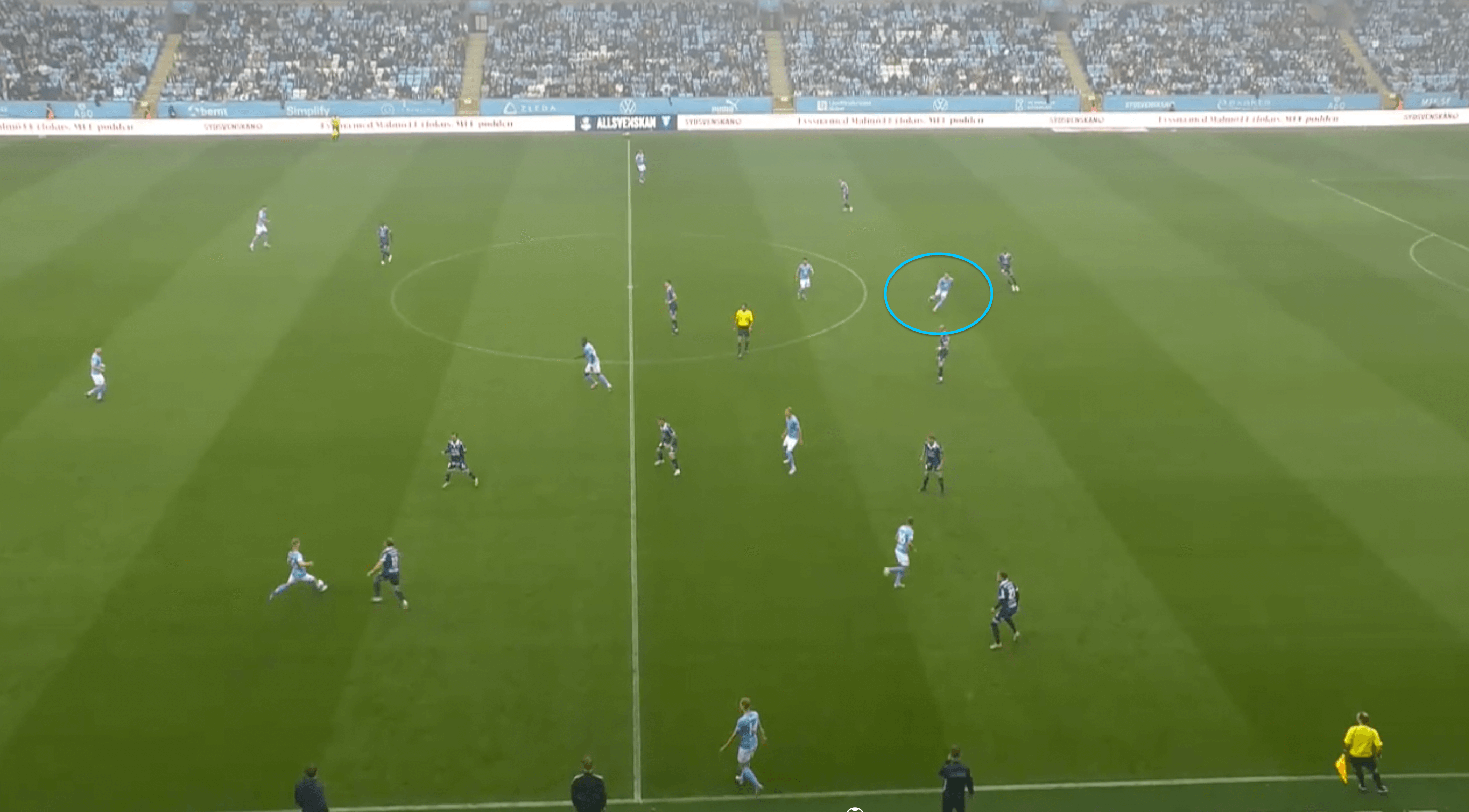 This is another example of him making a run, but this time the whole opposition defence is very messy which makes it easy for Malmo to create a good chance out of it and get into the opposition’s final third.

Malmo asks their strikers at times to drop deep and help in the build-up play. In these situations, Birmancevic is pretty much used as the one to make runs in behind or even hold the defensive line a bit higher and stretch them to create gaps in the midfield. We can see that in the image below as well.

He can further make his ability good by using his runs as a decoy and dragging players from their positions for his teammates which would definitely add more variety and confusion in dealing with his runs for the opponent.

Birmancevic is really good at helping his team during the defensive phases as well as he helps in cutting passing lanes out and also pressing the opposition to look to recover the ball from them. On average, he has recorded 5.09 defensive duels per 90 in the league this season and has won 61.4% of his duels.

In the above example, we can see him putting on a slide tackle to dispossess the opponent and win the ball back from them to recover possession of the ball for his team. This is from a counter-pressing situation.

Defensively, he can further develop or be coached to improve his cover shadowing ability which is pretty much one of the things that he does not do to perfection where, in most scenarios, his cover shadows are not exactly well covered.

Overall, Birmancevic is a very exciting young winger who has been playing really well for Malmo this season and has been one of their best players this season. He certainly has the ability and potential to develop into a sought-after winger in Europe, especially with his ambipedal nature and his ability to make runs off the ball which resemble the current Tottenham Hotspur star Ivan Perisic, who has also proved his credentials in Serie A and Bundesliga as well.