One of the biggest narratives in Serie A over the summer months surrounded the future of the Argentinian  international forward Paulo Dybala. Dybala had been at Juventus since 2015 but consistent niggling injury issues had limited his impact over the course of his time at the club. In the end, his departure from the Turin-based club felt almost apologetic as Juventus withdrew a contract offer that the club had made in October 2021 and declined to negotiate any further, thus accepting that Dybala would be free to leave on a free transfer at the end of the 2021/22 season.

Dybala, however, would not be moving far, as he agreed a deal to sign for a rival Italian side and signed a three-year contract with AS Roma. This move came as the side from the Italian capital recruited a set of players designed to create a squad that they feel, with Jose Mourinho as the coach, will have a very real chance to challenge for the Serie A title this year. Along with the signing of Paulo Dybala we have also seen Roma add experience and depth to their squad with the additions of the Turkish international fullback Zeki Celik from Lille as well as the signings of the experienced midfield duo Nemanja Matic, on a free transfer from Manchester United, and Giorginio Wijnaldum, on an initial loan deal from PSG. In making these signings, Roma have not only added depth and given Mourinho options but created a squad with players that are used to success and who know what it takes to win at the highest level.

The marquee signing, however, is very much Dybala. With the Armenian international Henrikh Mkhitaryan choosing to leave Roma in the summer to sign for Internazionale, there was a creative gap to be filled in the attacking third for Roma. With the addition of Dybala, assuming he can maintain his fitness, Roma have not only filled that gap but upgraded on what they had in the position last season.

With the England international striker Tammy Abraham leading the line for Mourinho’s side, the movement and technical quality of Dybala, and the Italian international Nicolo Zaniolo, will be key to Roma’s hopes of success this season. The concern for fans of the club, however, surrounds the fact that both Dybala and Zaniolo have suffered fairly significant injury issues in their careers to date.

This past weekend saw the opening set of fixtures in Serie A as Roma started the 2022/23 campaign away to to Salernitana. This was the first chance that we have had to see the combination of Dybala, Abraham and Zaniolo in Serie A. In this tactical analysis, which will be a team scout report, we will break down some of the tactics that we saw in this match.

While there was no doubt going into the season that Mourinho would favour Abraham as Roma’s most effective ‘fixed’ striker at the furthest point of the attacking structure, there was still some question as to the exact role of Dybala and Zaniolo around that position. Indeed, there were genuine questions raised, after the signing of Dybala, as to whether he, Abraham, Zaniolo and the dynamic central midfielder Lorenzo Pellegrini could all play in the same team. The line-up for this opening league match sought to put those doubts to bed as all four players started the match.

While Abraham played as the most advanced striker, we saw Dybala and Zaniolo play effectively as dual ’10’s behind the striker. The width in the attacking phase was supposed to be provided by the wingbacks in the Roma system, Leonardo Spinazzola on the left and Rick Karsdorp on the right. In the end the combination between players in the central areas and the half-spaces were very good although work still needs to be done to ensure that there is genuine and effective width as Roma break into the final third.

In this match, we saw that Salernitana were perhaps less stretched in the defensive phase than they could have been. By having players overloading the central areas or the half-spaces, the opposition will look, as they did so here, to maintain a narrow defensive block. If Roma are able to improve their attacking width then the opposition will be forced to spread out defensively and this will create space centrally that Roma can exploit.

While Abraham is a good striker who will act as the focal point of the attack, it was interesting to note within this match that his movement was far more fluid than we may have expected. The English striker dropped off to show and receive the ball and in doing so he dragged opposition defenders out with him. We then saw Dybala looking to be aggressive with his movements to break beyond Abraham into advanced areas. 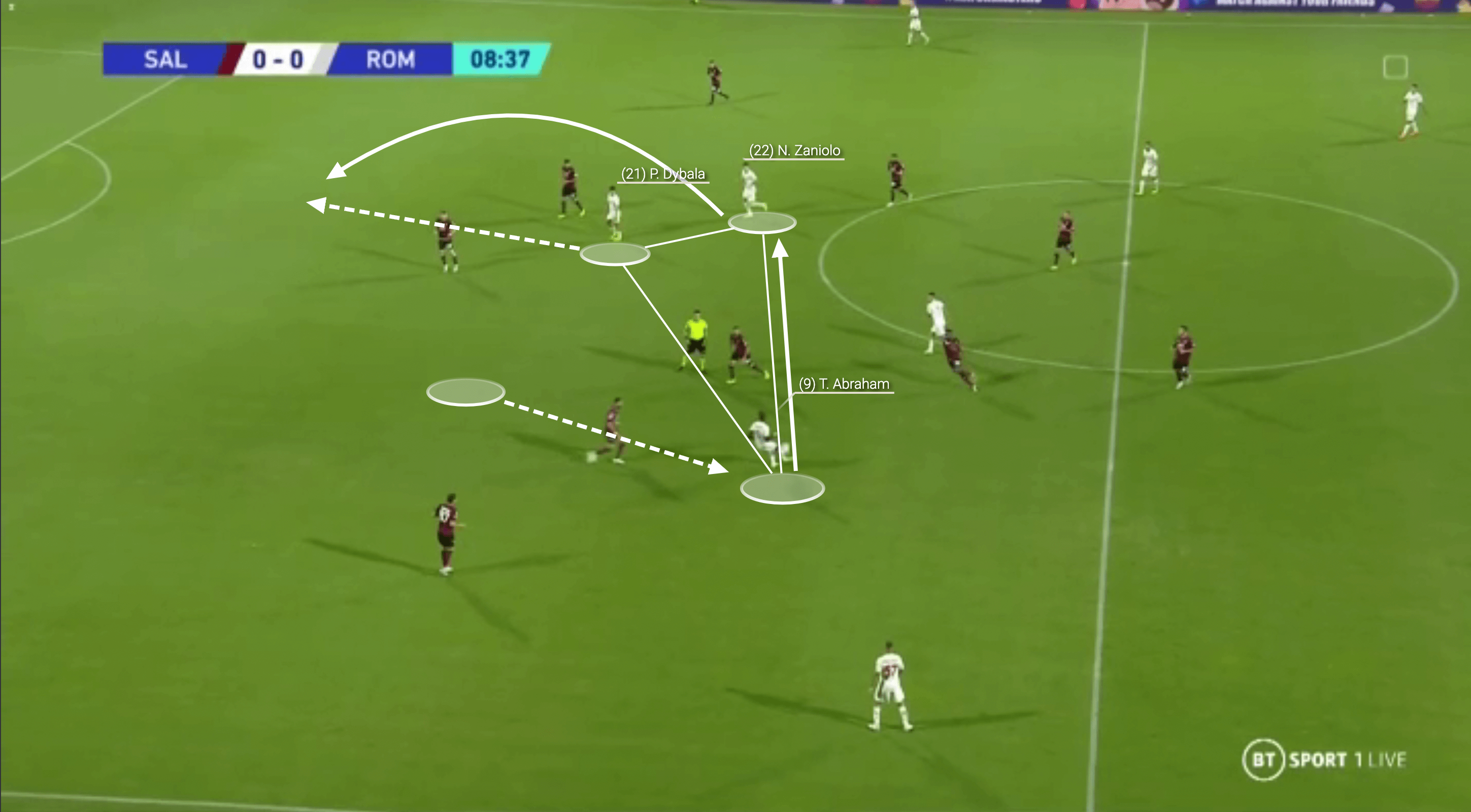 Here, we see an example of the movement of Abraham to come deep to receive the ball and the effect that this has on the opposition. As Abraham drops off towards the centre of the pitch he receives the pass but looks at the gap that has been created in the defensive line of the opposition as his marker follows him back towards the ball.

As Abraham receives, we see the interplay between the three most advanced players for Roma as he connects a quick lateral pass to Zaniolo. The ball is then played behind the defensive line and we see the aggressive movement from Dybala to get beyond Abraham to attack the space behind the front line. Throughout this game, the movement from Dybala, in particular, was impressive and effective as he showed a clear understanding of how and when to drop off to find pockets of space or move up to attack gaps or space in the opposition’s defensive structure. 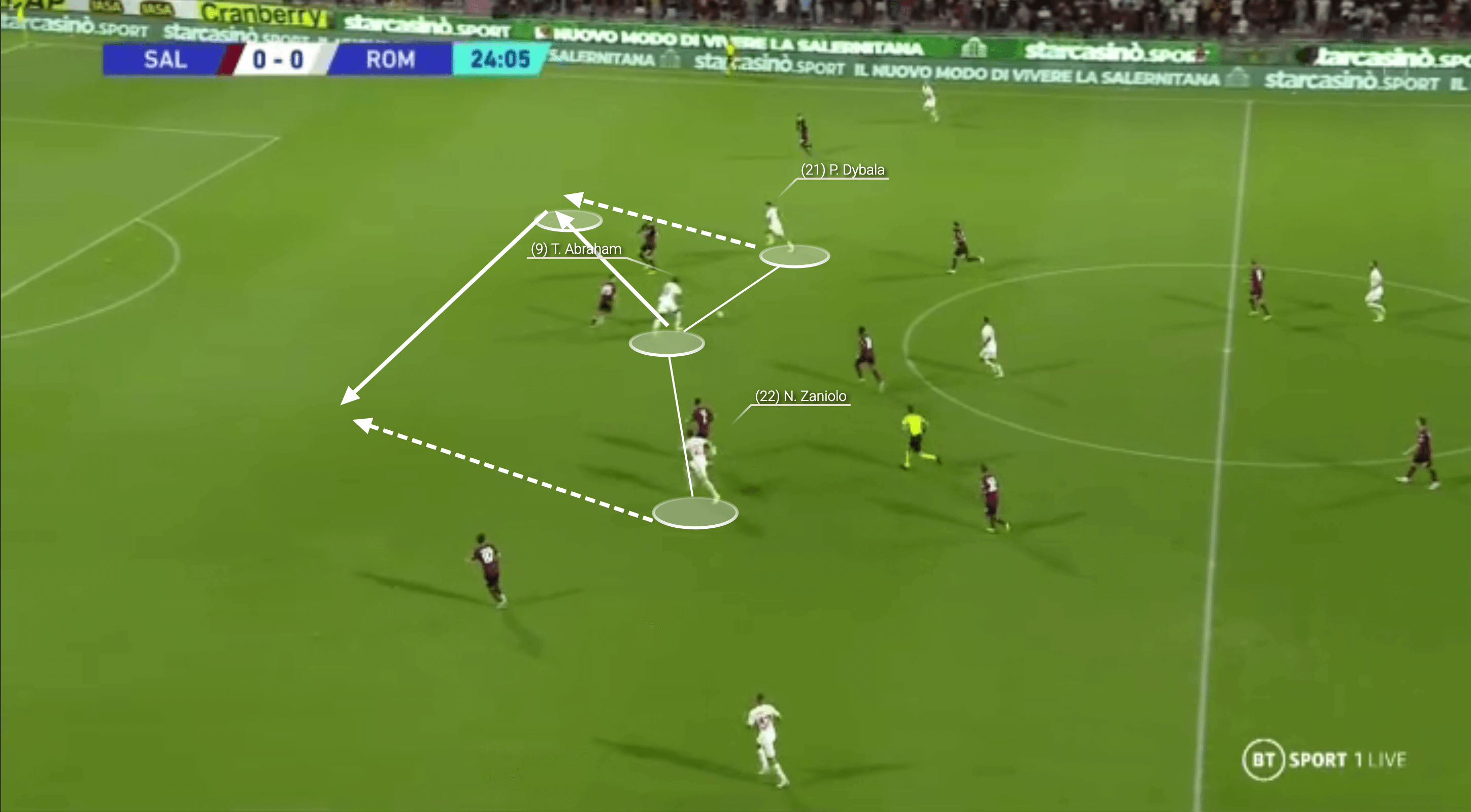 A similar situation here as, again, it is Abraham who is the first link player as he receives the ball in the final third. We see once more that the three central attacking players are positioned very close to one another. This effectively, creates an overload in the central spaces against the Salernitana defence and provides opportunities for quick interplay and passing combinations to create chances to play through and beyond the defensive structure.

In this instance, Abraham plays out to the wide areas to where Dybala is moving to attack and, as the play develops, the ball ends up being pulled across to the near side to access the run of Zaniolo. 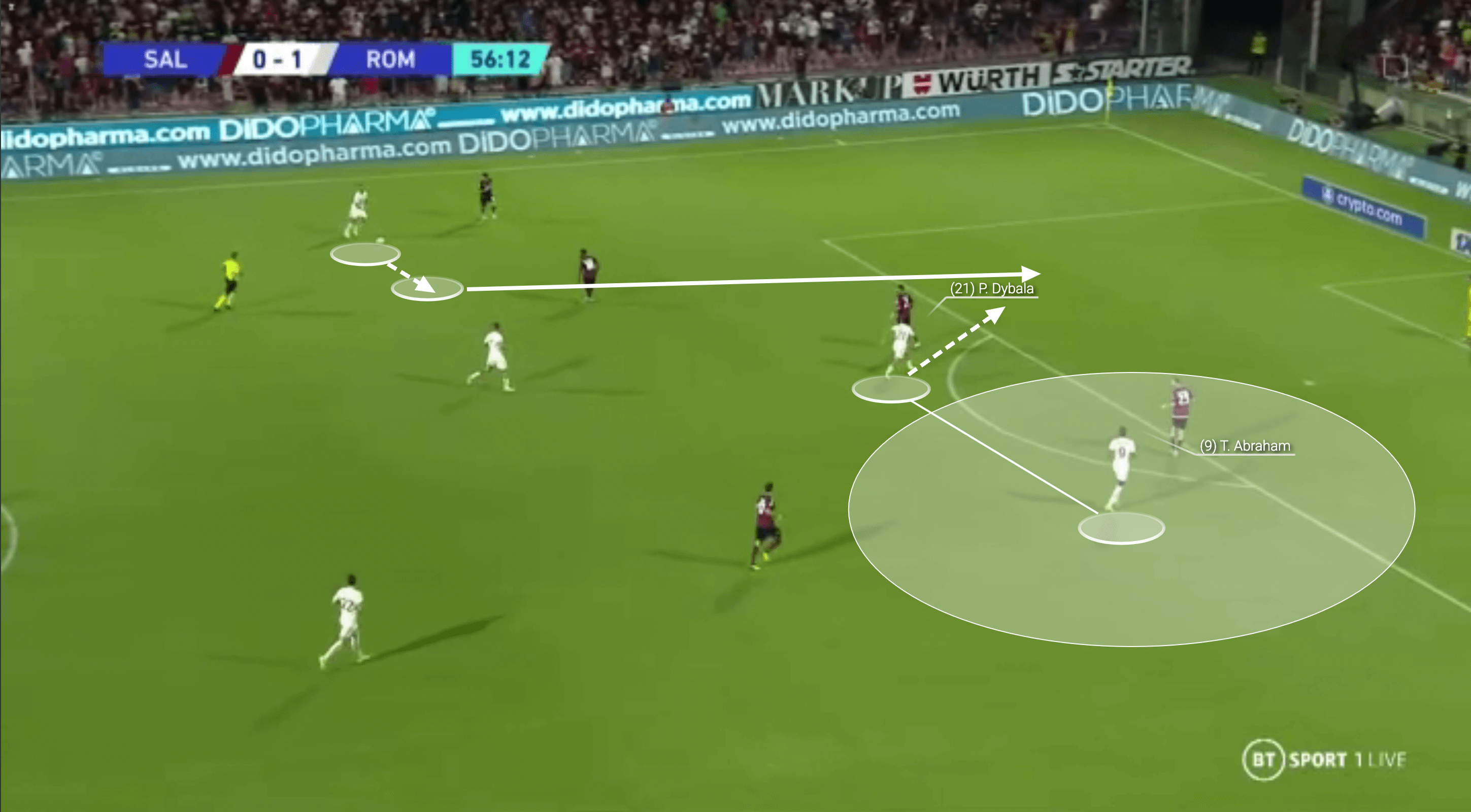 A third example from this match of the way that Abraham creates space that Dybala can move into and exploit with his movement. This time, the ball is with Spinazzola on the left side of the attack and, as he cuts inside, we see the initial positioning of Abraham and Dybala who are positioned high and just outside the opposition penalty area.

Note the position of Abraham in particular here. By pulling away from the ball to the far shoulder of the furthest central defender from the ball, he has effectively isolated and pinned that player. Now, Dybala can isolate the other central defender with a well timed and aggressive run off the blind side to access the pass that is played through by Spinazzola.

We have to be absolutely clear that it is evident from this match the three attacking players for Roma still have to get used to playing together. There were points when Zaniolo in particular perhaps made the wrong run or played a pass at the wrong time. With that said, however, the early signs are extremely promising.

As much as the new look Roma attack impressed in terms of movement and fluidity, this is still a side that is coached by Jose Mourinho and as such, we saw a familiar and very structured approach to the game away from the final third. Mourinho is not known as a coach that is willing to take chances at the back and in moving the ball through the thirds and he likes his sides to be extremely structured.

The fact that Roma have such a fluid and creative front three that they can combine with a structured and tactically disciplined shape behind is an interesting combination. It does, of course, remain to be seen whether Mourinho is willing to retain this tactical balance as the season progresses. 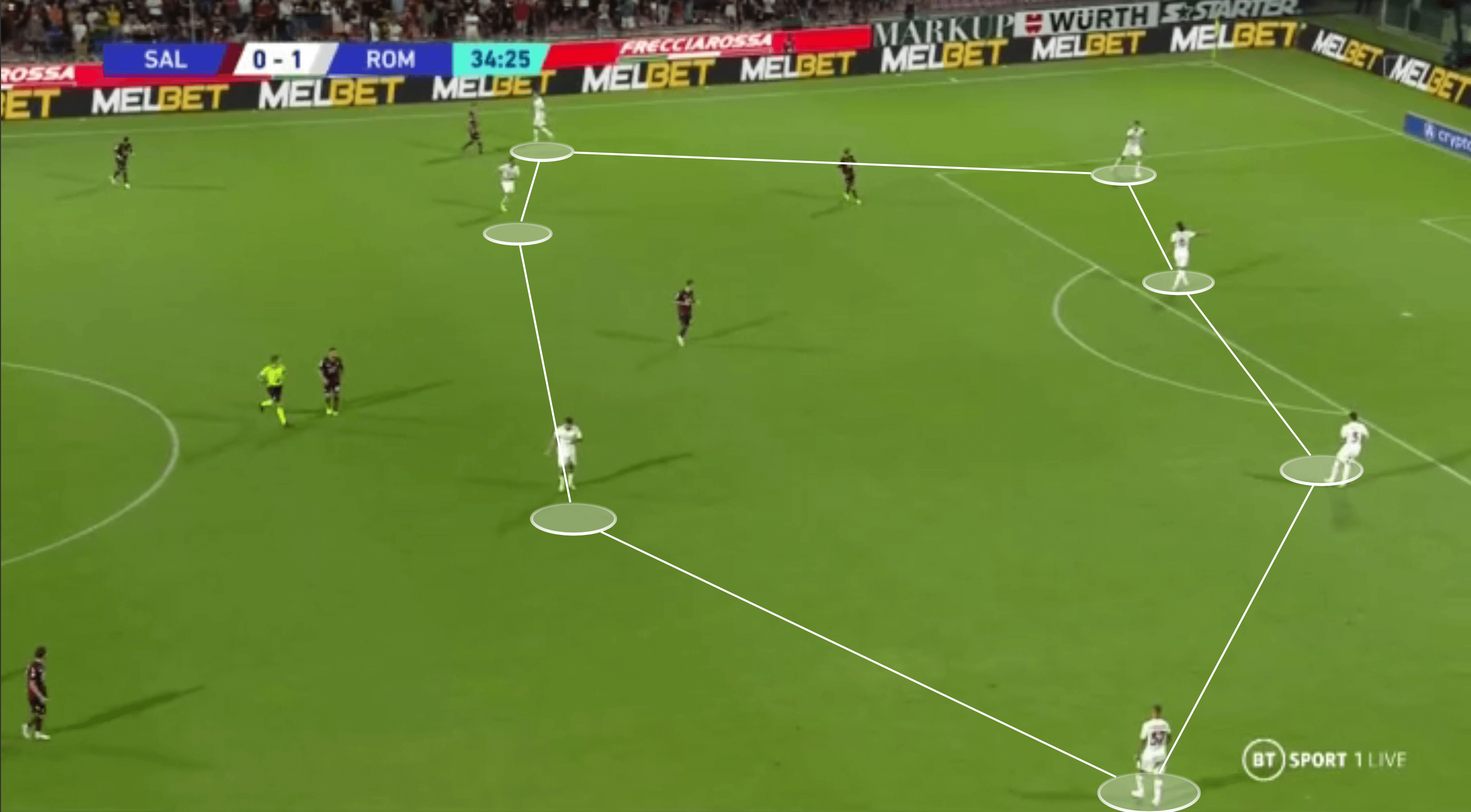 Here, we see an example of the shape and structure under Mourinho as Roma looked to take the ball out from the back. Part of the issue that held Roma back in this match was the fact that the wingbacks, Karsdorp and Spinazzola, were too passive and deep in general in their position but in the build-up phase, this is seen by Mourinho as being an important concept.

As you can see, however, a more proactive approach in terms of positioning in the build-up was possible. Salernitana were relatively passive in their press and as such the three central defenders, if split wide, and the goalkeeper would have been enough to play through the first line of the press. This would have then allowed the wingbacks and two central midfielders to be more aggressive in their positioning in order to allow the ball to be played forward. 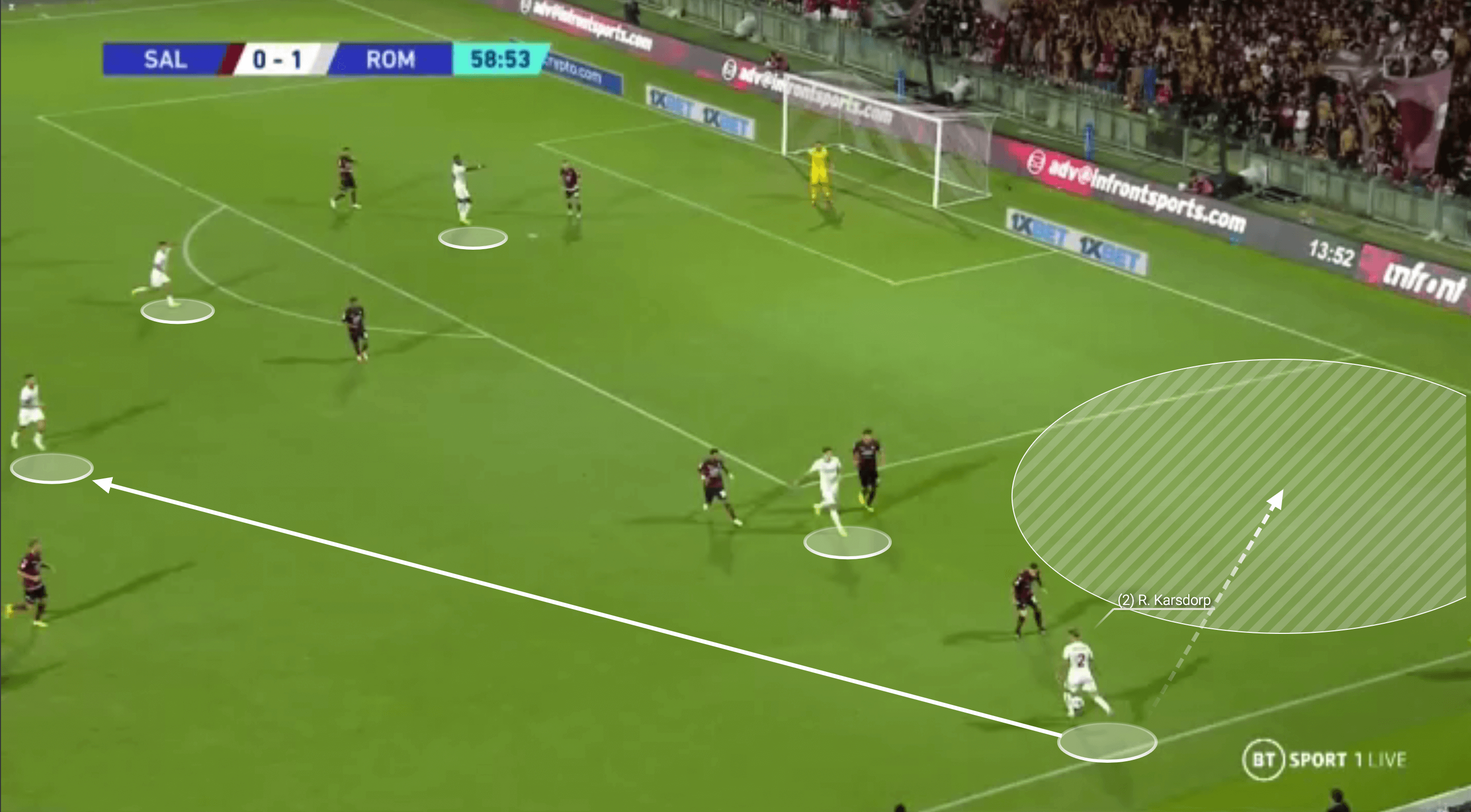 Even when the wingbacks were more aggressive in their positioning, however, their profile, in the case of Karsdorp at least, makes them relatively predictable in the wide areas as they access the final third.

In this analysis example, Karsdorp has taken possession of the ball wide on the right and he has isolated his direct defensive opponent. The Dutch wingback, however, is not a threat to attack down the outside in order to look to attack and get the ball into the area. Instead, he will almost exclusively look for opportunities to play the ball back inside to a teammate.  A more offensive-minded option in the position might create more fluidity and danger in these positions.

It is, of course, very early in the season to draw any real conclusions from this match, although the early signs for fans of Roma, and fans of a more competitive Serie A season, are promising. We could clearly see the quality of Dybala and the threat that his combinations with the other attacking players will create real danger for opponents throughout the season. In the end, Dybala came close to scoring as he hit the post from a shot across the face of the goalkeeper as Roma ran out 1-0 winners.

There are questions remaining around whether Mourinho will allow his side to become more fluid and aggressive as they move through the thirds. If he finds more of a balance between defence and attack, then there is every chance that Roma could be extremely dangerous opponents this coming season.