Last Saturday, one of the most important Allsvenskan games of the year was played between Malmo FF and Djurgardens IF at the Stadion. This match was a potential title-decider as Djurgårdens were the top of the league before the game with Malmö three points behind. If Jon Dahl Tomasson’s men won it, Di blåe would gain the upper hand in the title race.

Malmö tried very hard to revenge their 1-3 loss in spring, but after wasting several good chances, they let Djurgårdens came back in a sloppy set-plays defending. This tactical analysis will focus on the key tactics of the game, as the hosts were very good at beating the press.

Despite losing 0-3 to Juventus in the UEFA Champions League, Tomasson could not make huge changes as many players were away. Bonke Innocent was dropped to the bench as Adi Nalic returned to the team. They reverted to a 4-2-3-1 formation, Ismael Diawara made way for Johan Dahlin, and Søren Rieks missed the game due to injury.

Djurgårdens did not have European competition in the midweek. Kim Bergstrand and Thomas Lagerlöf also played a strong eleven, despite Karl Holmberg was missing. Joel Asoro was given the chance to start with Edward Chilufya and Haris Radetinac; Nicklas Bärkroth remained on the bench and entered in the latter stage of the game.

As usual, Djurgårdens defended with a 4-1-2-3 shape, but they were lacking the intensity to press. This was a problem since the middle of the season, while the team struggled to cope with the departure of Aslak Fonn Witry as well. Although Malmö had more games to play, they were aggressive and moving the ball around very well. 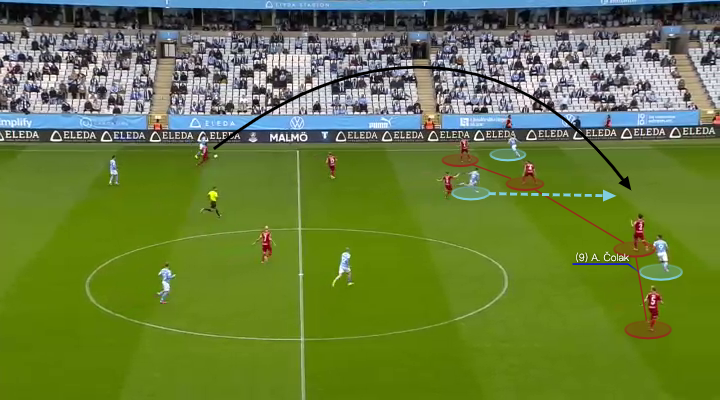 In the early minutes, the hosts were more direct by using long balls exploit the high line of Djurgårdens. Since they were encountering a back four, which only had two centre-backs, Antonio Čolak could always occupy one of them, then opening spaces between them.

The first image shows the split movement of Malmö’s left-winger and Čolak to stretch the centre-backs, then the channel was enlarged for the deep runner to directly. As the above image have shown, the long pass was provided by Martin Olsson on the left. 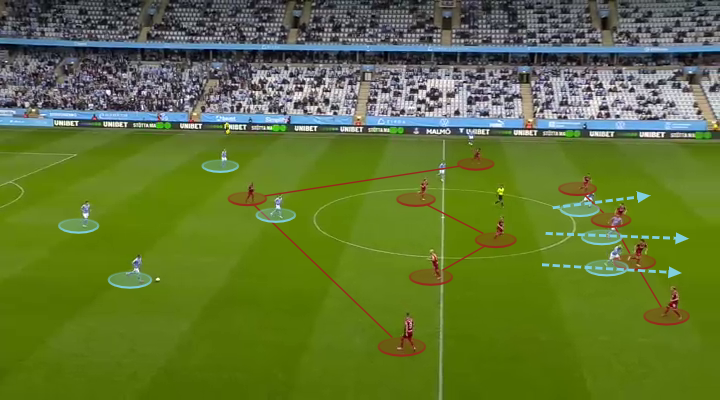 Malmö were more patient as the game continued, but the front three plus Nalic remained high and aggressive to look for spaces behind. With the constant behaviours that searched for the offensive depth, they pushed Djurgårdens defenders deep and stretched the defence vertically.

The second image shows the general ideas of Malmö. They had four deep players in the build-up, a pair of wide full-backs, and front three who always attacked the channels. The runners behind was also a strategy to constrain Djurgårdens’ defenders, so they could not join the press easily. 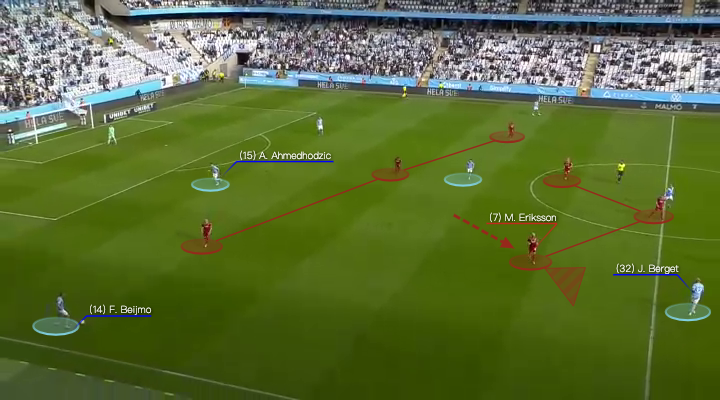 Malmö’s dynamic use of wingers was interesting. Veljko Birmancevic was more a threat in the offensive third, staying higher to push the defence, but Jo Inge Berget had a hybrid role. The Norwegian player would position himself in the half-spaces on occasions, which was an action to manipulate the second line of the defence.

You could see Berget’s narrow position above, he dragged Magnus Eriksson down as Djurgårdens would want to shut that channel. As a result, no one could jump onto Felix Beijmo if Radetinac failed to block the outside passes of Anel Ahmedhodzic. 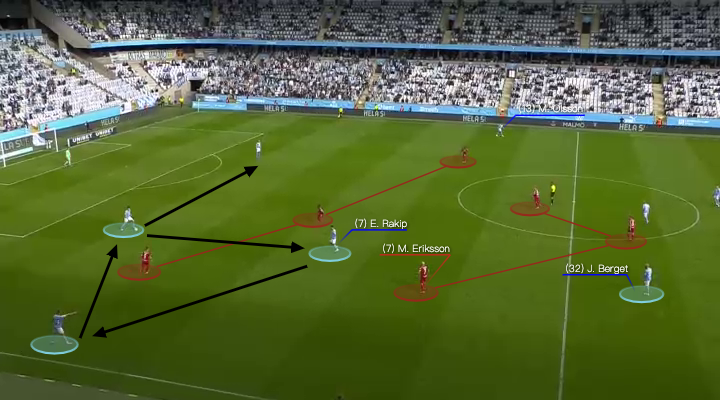 And these have given the foundations of Malmö ball circulation. In the build-up, they always went to the right side as Radetinac and Eriksson aged 66 in total, the duo lacked the defending intensity, thus, that flank was weaker. The above image shows the Malmö passing route, they always gave two to three options for Ahmedhodzic as Erdal Rakip also moved from the centre to support. Eriksson could not press Rakip as Berget was behind, he wanted to keep the Malmö right-winger under shadow, or else Ahmedhodzic would break vertically.

If Di blåe found the right side was difficult to break, they just smoothly switched the ball to the other side and get out from Olsson’s flank. Djurgårdens could not catch them. 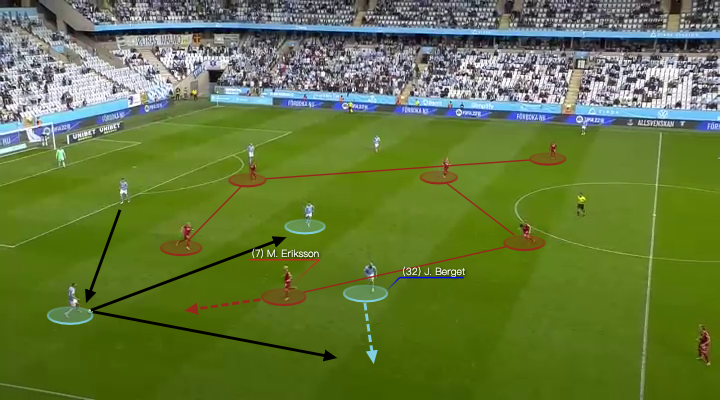 Another scenario here, the situation was similar, but some players chose alternative decisions. Again, Djurgårdens defended with a 4-1-2-3, and Radetinac again let Ahmedhodzic found the right-back as no pressure was applied to the ball.

To cover Radetinac, sometimes Eriksson would jump onto Beijmo when the pass went outside, but this could not convert into a side trap as Elliot Käck was usually deep. But when Eriksson was out, Rakip was unmarked in the centre given Rasmus Schüller was deep, while Berget could make a counter-movement on Eriksson’s pressing direction to receive. 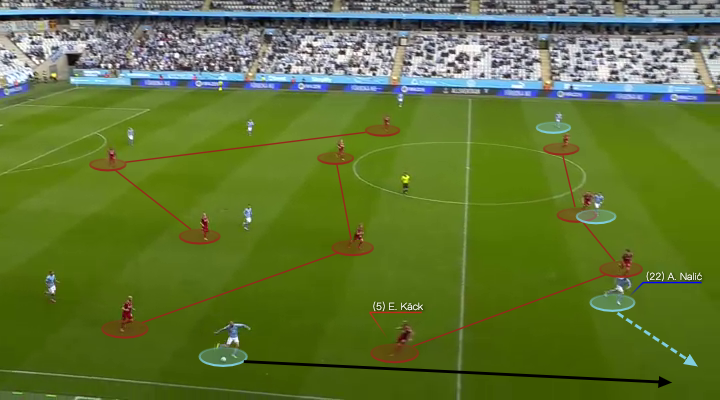 And since Malmö were confident to play within one to two touches, the tempo was quick, and the defending side rarely accessed the ball on time. When Berget received, Käck felt the urgency to stop him, so he moved out to press. However, this also resulted in Malmö front three vs Djurgårdens three defenders in a high line.

As we said, the press was always late, so Berget had the angle to release. Nalic was smart to make runs into spaces whenever the front players created for him. With these simple passes, Malmö very easily broke into the final third and they would have the chance to attack. 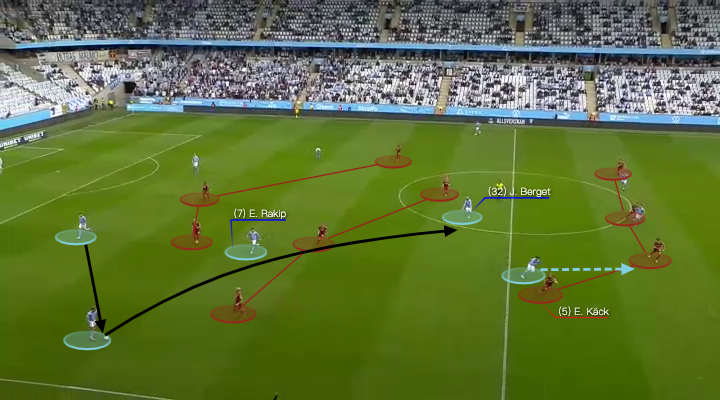 One more alternative of Malmö’s attacks here. Again, they moved the ball from Ahmedhodzic to Beijmo, Djurgårdens players also chose alternative decisions. This time, Eriksson pressed Beijmo while Schüller went up to press Rakip, so they close the midfielder.

However, Malmö were too good in these situations. They just simply counter-act as spaces behind the midfield was opened for Berget. With Nalic’s forward movement to bring away Käck, and Čolak to occupy the centre-backs, Beijmo just curled the ball into the centre, and now they had a fast break again.

Since Djurgården were one-goal down at the break, the second half was a more opened game with more transitions. We also saw Malmö trying more diagonal switches to break the press in another way. 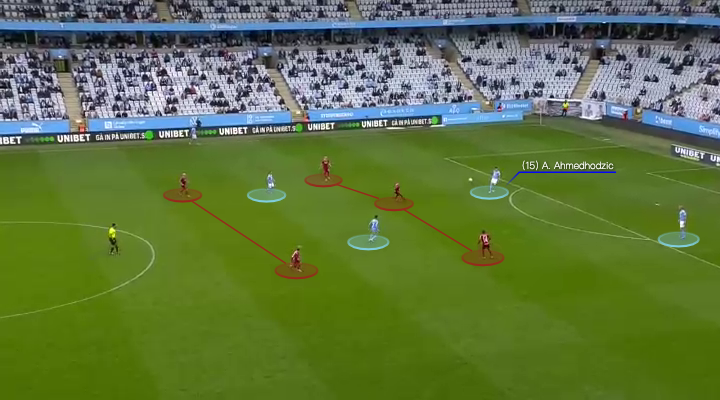 Sometimes it was a 3-1 shape, Christiansen could also drop as the right centre-back of a back three so the opponent would not jump up to mark him. But in a 2-2 shape, Malmö would not risk at going into tight spaces. Instead, diagonal switches from Ahmedhodzic was their strength. 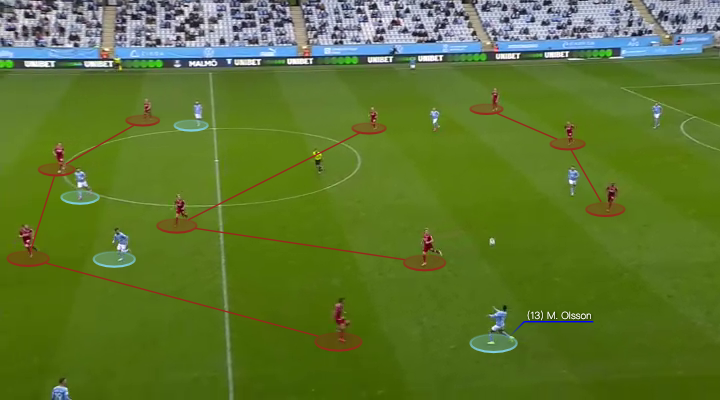 They always had full-backs in a deeper position to receive the diagonals. Here, Olsson moved up to receive and attracted Jesper Nyholm. Once again, Djurgårdens backline was outnumbered as Malmö already had four high players ready to run behind. 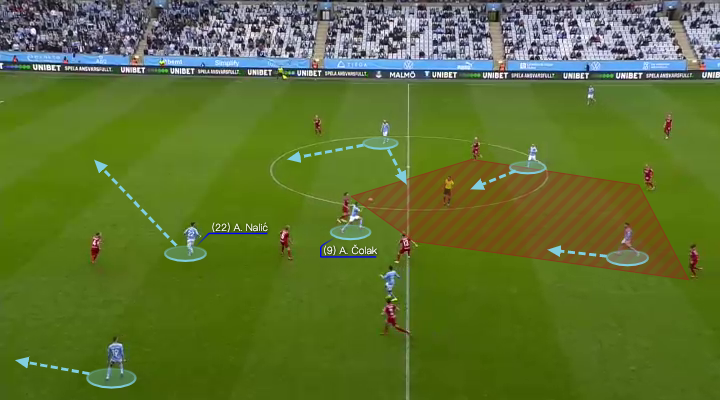 Although Olsson was not controlling the first ball well, he managed to kick it to Čolak. This was another issue of Djurgårdens’ defence, they were loose in the second ball fights. Hence, Malmö often exploited these occasions to pick up the ball quickly, trying to attack the high line again.

In the above image, the red zone demonstrated spacing between Djurgårdens players. They were lacking the intensity to recover those spaces, so even Čolak struggled to chest the ball down comfortably, other Di blåe players could support. Also, Malmö had runners from many angles to attack the disorganized backline, just one overhead pass and they would be entering the final third.

Djurgårdens were clearly lacking the intensity compared to the beginning of the season. Their season average PPDA was 11.24, but this game they were more conservative (17.89), allowing Malmö to pass more.

In the early minutes of the game, Malmö were controlling the transitions quite well. The players came with good intensity and tried their best to recover possession when they lost the ball. 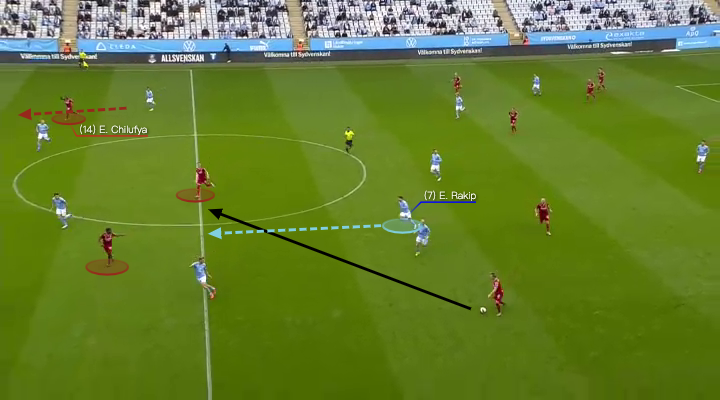 The above screenshot shows a Djurgårdens break in the counter-attacks. Chilufya was already asking for the ball and making a run behind.

While both Asoro and Chilufya kept the Malmö centre-backs occupied, Radetinac was seemingly the free option, but this was anticipated by Rakip in advance. The 25-year-old midfielder sprinted back to intercept that pass, it was a top defending. 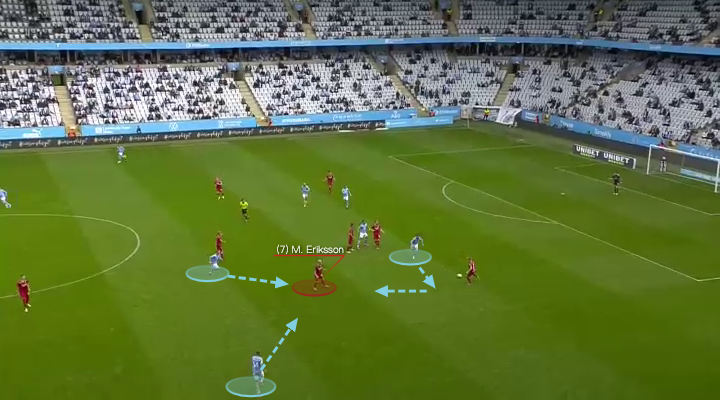 Another scenario here. Malmö tried to play vertical but lost the ball to Djurgårdens in the offensive third. As usual, the guests tried to find Eriksson, but the Di blåe players were hardworking. At least two of them (Christiansen and Beijmo) reacted and immediately jumped onto Eriksson from two angles, stopping Djurgårdens’ counter-attack.

But as the game developed, we saw Djurgårdens having more chances to attack in the offensive transitions. Chilufya, undoubtedly, was the big threat as no one in Allsvenskan could cope with his pace. The Zambian player had a mixed game at Stadion, although his 0.15 xG was lower than his average 0.34, he had higher dribbles successful rate (75% vs 48.6%), and his 1v1 ability was crucial in this phase. Of course, he would need to be more consistent in his game and increasing his effectiveness in the final third.

Bergstrand and Lagerlöf’s team was not at their best. They averaged 1.86 xG per 90this season but only recorded 1.33 against Malmö. In the early minutes, they always tried to exploit the oppositions’ high line by Eriksson’s long pass. Averagely 12.24% of their passes were long in this season, but this figure rose to 16.61% in this game. 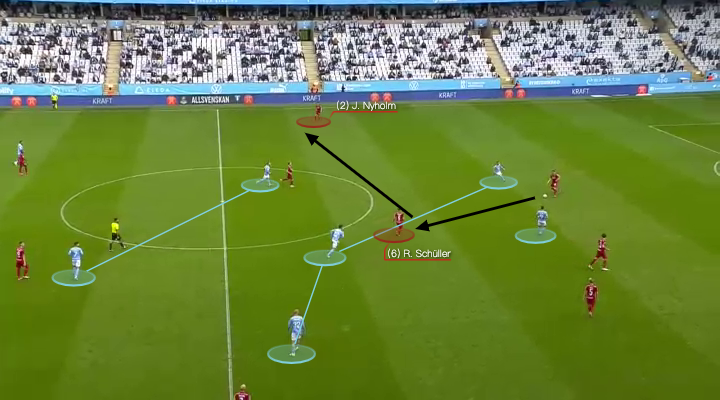 In the build-up, Djurgårdens used could use the wide full-backs and holding midfielder to exploit the 4-2-3-1 press. For example, they dragged Malmö to one side in the above screenshot, then quickly moving it to Nyholm’s side. The right-back would have some rooms to bring the ball forward. 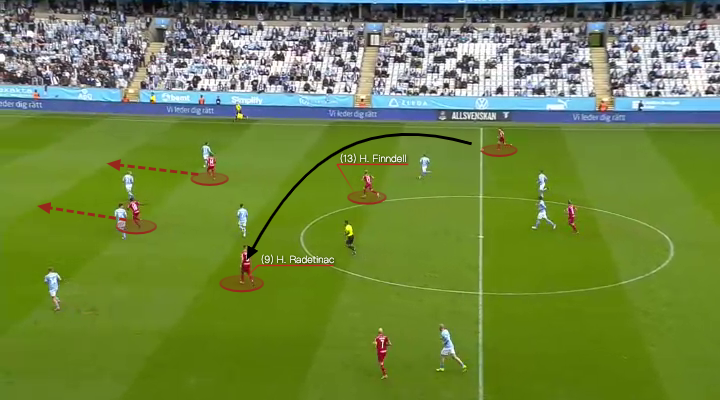 Then, it was the trademark diagonal. Particularly, Djurgårdens found Radetinac with the digaonals, including the one in the image above. Since Asoro and Chilufya were always on the shoulders of the defenders, sometimes Radetinac could come to receive.

But they had too many issues in this game. Firstly, their main source of creativity, Eriksson, was under severe pressure and he could not pass comfortably. He had 0.34 xA per 90 in this season but recorded 0 xA in this game. Without the killer passes of Eriksson, Djurgårdens struggled to develop good attacks.

Apart from Eriksson, Hampus Finndell, the other advanced midfielder of Djurgårdens could not integrate into the game as well. The 21-year-old player could only use his movements to attack the penalty box, but unable to give a lot of contributions in the construction of the attack.

And the second issue was lacking the involvement of strikers. Asoro was a bit quiet, while his replacement: Bärkroth did not shine either. The above image shows the problem as well, as the 29-year-old attacker only received one (and it’s unsuccessful) pass in 38 minutes. 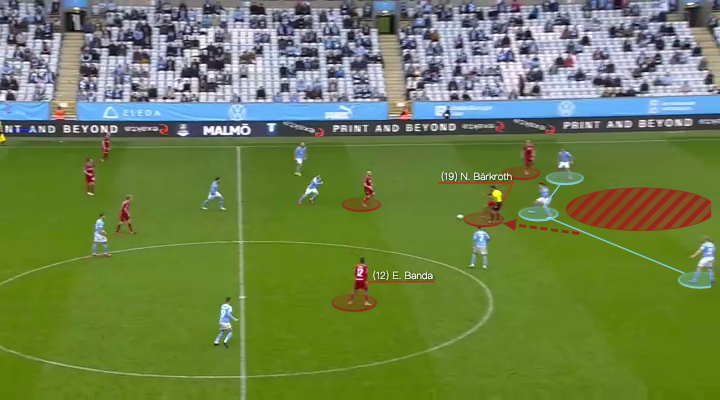 Compared to their oppositions, Djurgårdens were also lacking the spaces to attack spaces behind, but they were not strong at operating in spaces between the lines. For example, the above scenario was the only received pass of Bärkroth, he pulled Ahmedhodzic out of position while dropping to receive a vertical pass, but no one would use red spaces even they were created. The wingers were a bit detached from the others, and they mostly thirved in 1v1 situations only.

Malmö must be disappointing for giving the opponents a chance to take a point away. Their intensity was so high at the beginning of the game, and Djurgårdens could never press them as we’ve shown in this analysis. However, let’s not forget they also had Chelsea and Zenit awaiting in the UEFA Champions League, that means they would be playing more games than the oppositions.

After weathering the storm, Djurgårdens had a good point. However, Lagerlöf believed it was a more even game as their teams also had good chacnes to score. This was true as well as Chilufya’s pace made Mamö’s high backline suffer, while Radetinac was quite good against Beijmo. There were 11 games to play and every one must be treated a final.